If you're at all familiar with Gargamel, you know that they're a group of about half a dozen guys in Japan who run hip clothing store, Thrashout, whose real claim to fame is their designer kaiju toys. In fact, they're easily among the very best at vinyl toy production. They make toys of their own characters or of patchi-kaiju ("patchwork monsters"...monster characters from old illustrations, often unlicensed). Zagoran is of the latter category.

Zagora(n) is a fascinating patchi-kaiju, and easily the most prolific. To date, I believe that there have been no fewer than five different companies making various toys of the ol' chap. Rather than reprint his tale, check out this thread on Skullbrain by Roger Harkavy, with props to Matt Alt. Regardless of his fate as an intellectual property, it would be tough to argue that Gargamel's vision of the one-eyed monster isn't the most popular among toy collectors.

Now, enter FullyVisual, a one-man metal-casting operation in the States run by Jamie Mathis. Basically, he takes artwork or sculpts from different artists, re-sculpts them to make them suitable for diecasting, and then renders them in fine metals. How amazingly cool is that!? So, Jamie got together with Gargamel and took their hottest interpretation of the cycloptic nuisance (the mini figure), and reworked the sculpt to begin casting.

FullyVisual produced six different diecast colorways of this metal statue. The first four are typical for their productions: black-stained bare metal. They made 25 silver, 25 copper, 15 black nickle, and 15 gold Zags. And to make things even MORE enticing, Paul Kaiju, himself, came aboard to do 10 each of painted red/green, and painted blue/brown. The following review is of the red/green PK version.

[Apparently, there's also a "S**thead" chase colorway, too! Wonder what that's like...] 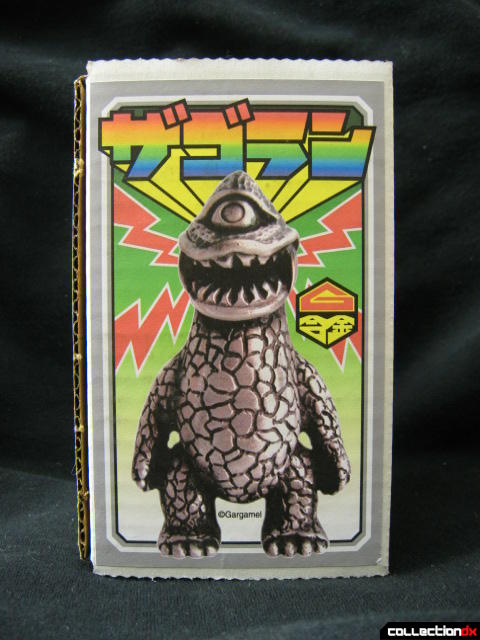 When I first got the package, I noticed how nice the box was. Heavy-duty corrugated cardboard. Impenetrable!

But more importantly were the graphics designed by Gargamel. Sure, the styling's pretty groovy...but one thing Gargamel's known for is their subtle references to the classics...

The above is from Bullmark's classic "Bullpet" line of licensed Toho kaiju diecast figures. Note the similarities?? There's the same silver background with inset, framed photo of the toy. Same gradient color block letters. Same hexagonal company logo. If you've ever owned a Bullpet, you know what vintage Japanese toy love is. They're that good. It's no wonder Gargamel and FullyVisual sought to pay homage to this legendary line. 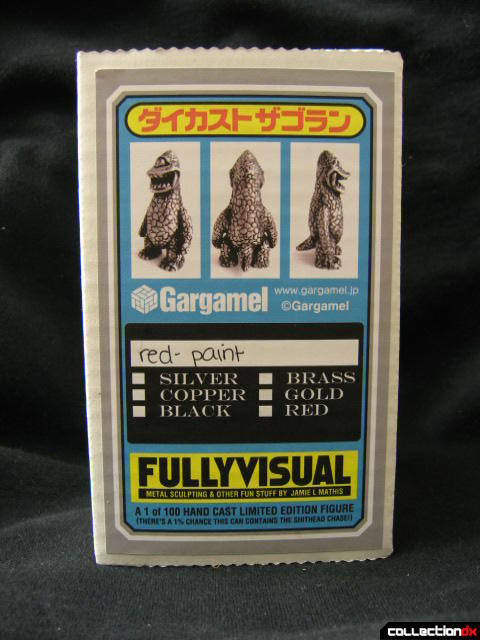 Upon opening the box, the toy and its base are enshrouded in a cloth drawstring bag. Very nice, classy touch! The bag is then wound thickly in bubble wrap and stuffed securely in the box. 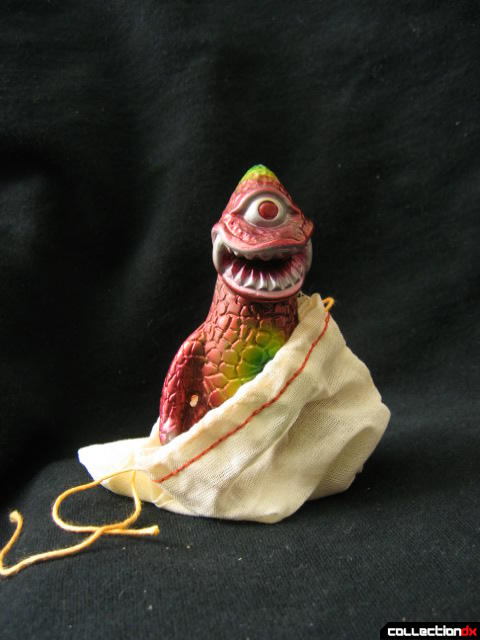 The figure, itself, is absolutely lovely. Pricey, perhaps. But lovely. [His vinyl counterparts usually retail for 1/3 of this guy's pricetag.] 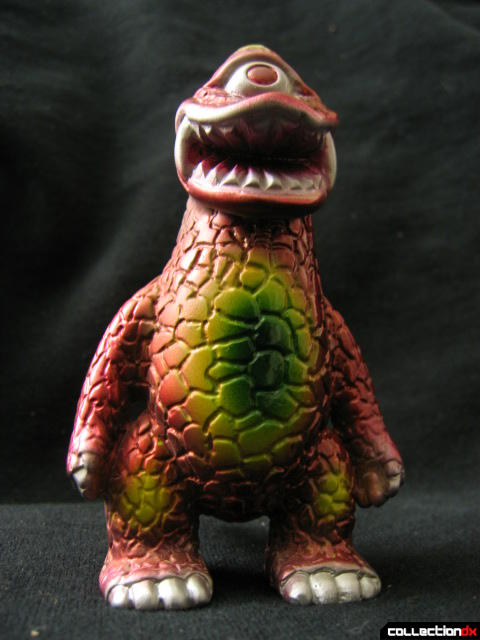 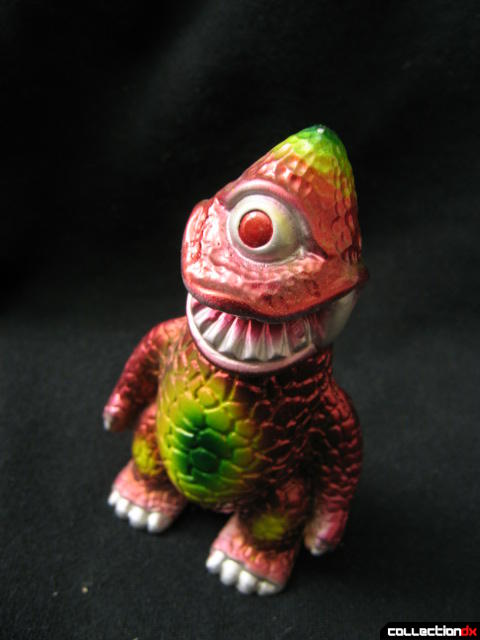 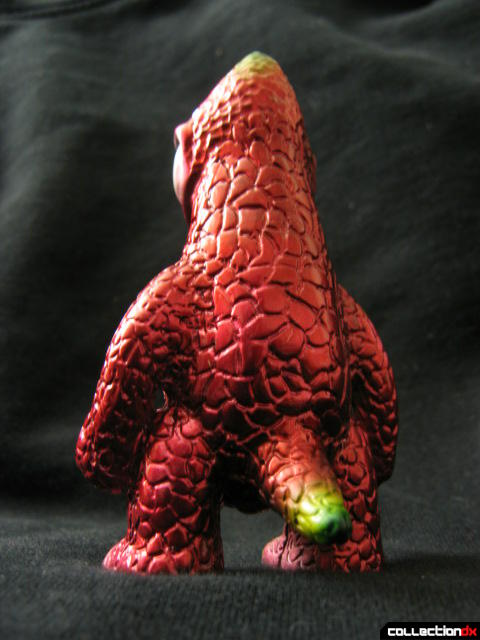 There are a whopping...wait for it...ZERO points of articulation on this baby! That's right! Just a heavy metal monster with a smokin'-hot paint job. It's a shame that photos just don't do the toy justice. It really needs to be held in your hands to appreciate the heft and revel in the colors.

That red is really deep and lustrous, like a dark ruby. VERY metallic--almost chrome-like finish. The yellow, green, and silver sprays are applied with care, as well. I love how Paul repeated the red-yellow-green fading effect on the belly, top of the head, and tip of the tail. 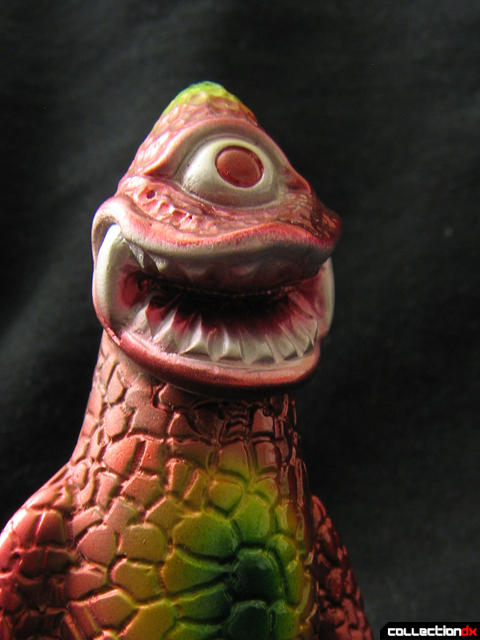 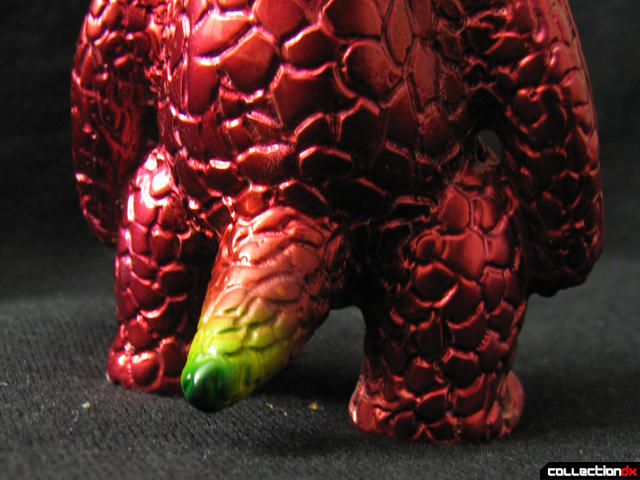 The sculpt of this casting is interesting. The arms are sorta down at his side, and the hands are actually fused to the hips. There's only a tiny gap between his arms and body. This is different from the normal vinyl mini, whose arms are free and posed asymmetrically in a very subtle way. 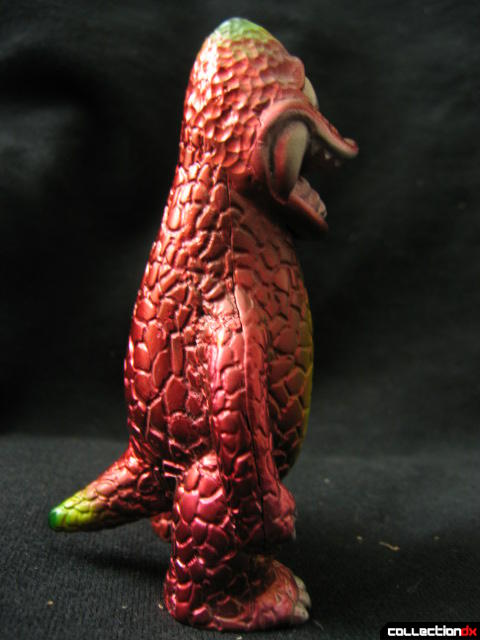 Also, I'm not exactly sure how this thing was cast. It's been a WHILE since shop class, so what do I know? But there does appear to be seam running up the side, from his feet, along his arms, and up to his jaw. What's weird is that the seam doesn't proceed up the side of the head (or on the bottom of his feet--those suckers are smooth). Dunno how it all works, but it's interesting to note... 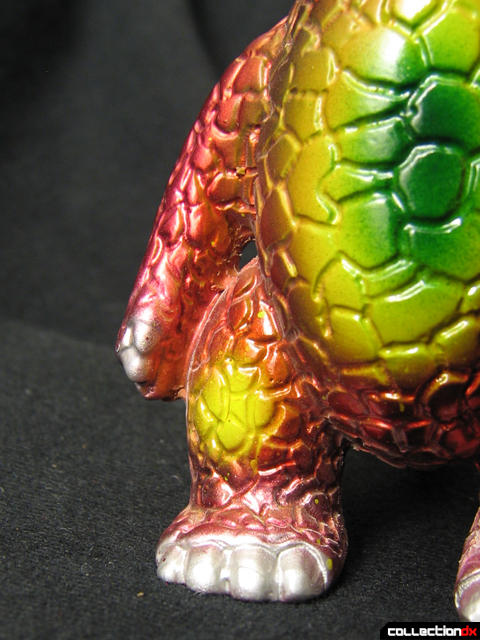 The bottom of the right foot has Paul's initials on it. And both feet have two holes in them for affixing the base. 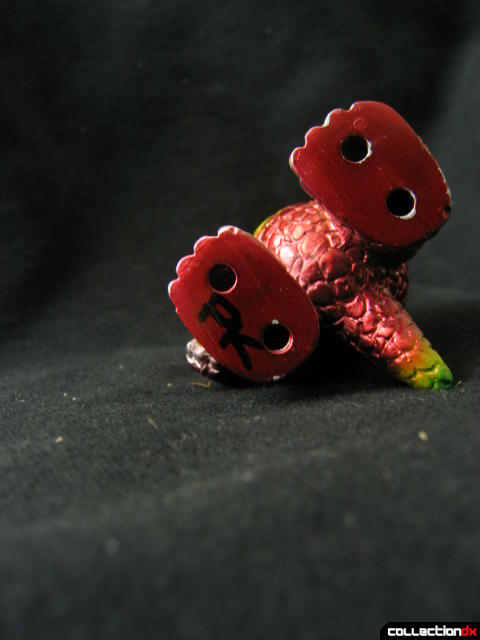 The base, itself, is a simple metal plate with matching pegs and footprints for Zag's feet. It's got an interesting worked-metal finish to it, and I found its inclusion a nice touch that wasn't necessary, but quite welcome. 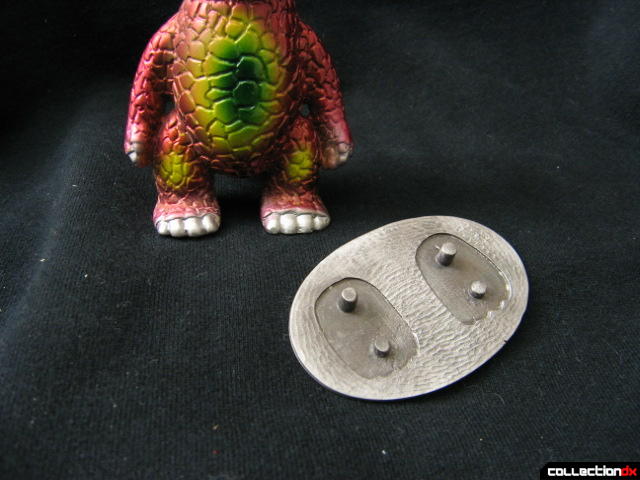 The bottom of the base features the stamped emblems for Gargamel and FullyVisual, and also the number of the piece. This is kinda interesting because this particular figure is 64 of 125. Well, if you tally up the numbers of the six different colorways, you only get 100. Could there be 25 of this chase "S**thead" colorway? Or maybe the numbers on the website for the other colorways were just wrong... Eh, whatever. 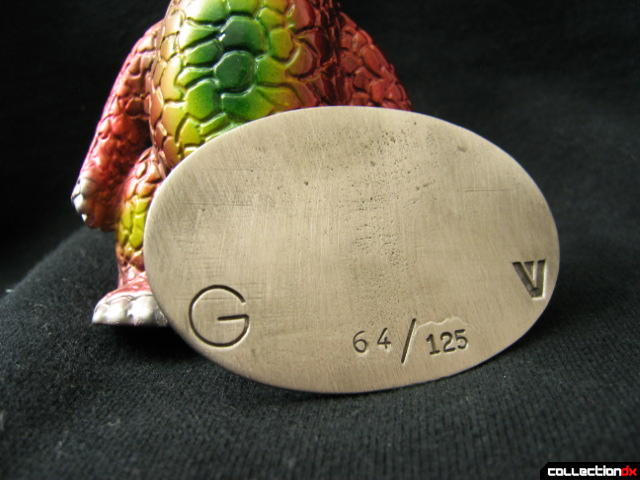 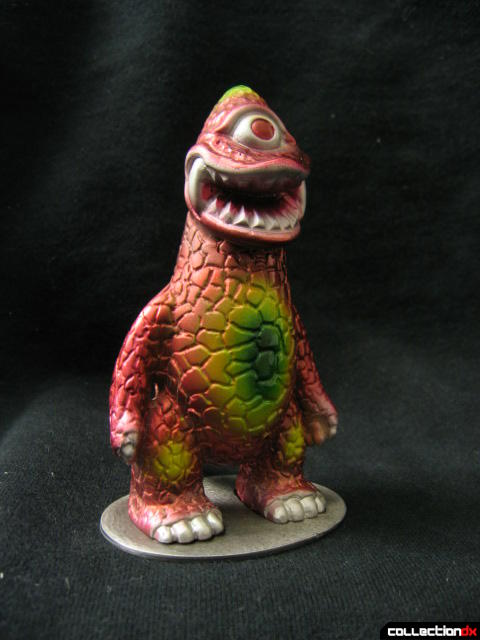 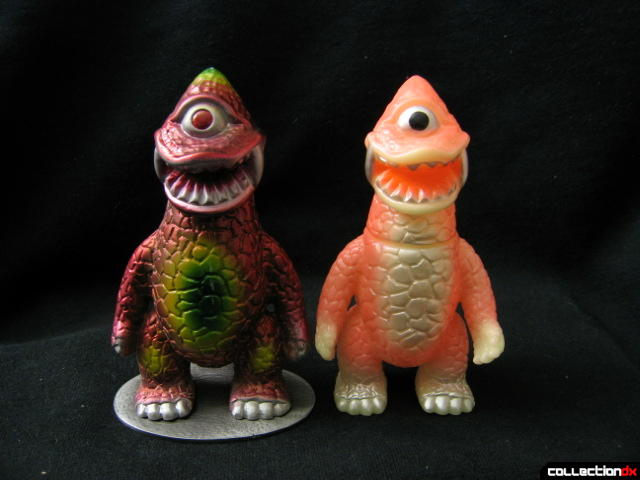 Note the differences in the arms. 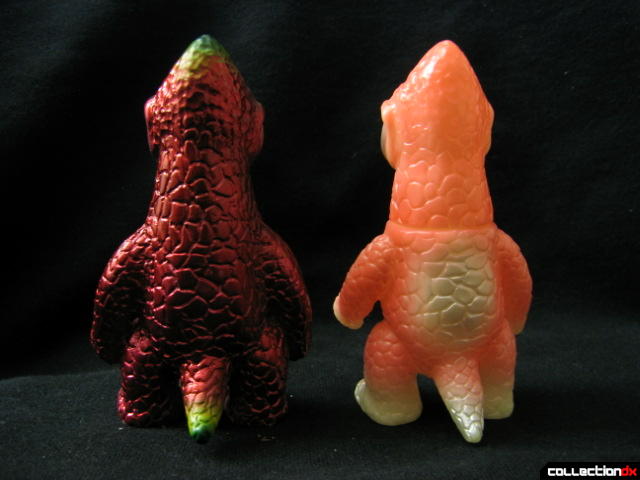 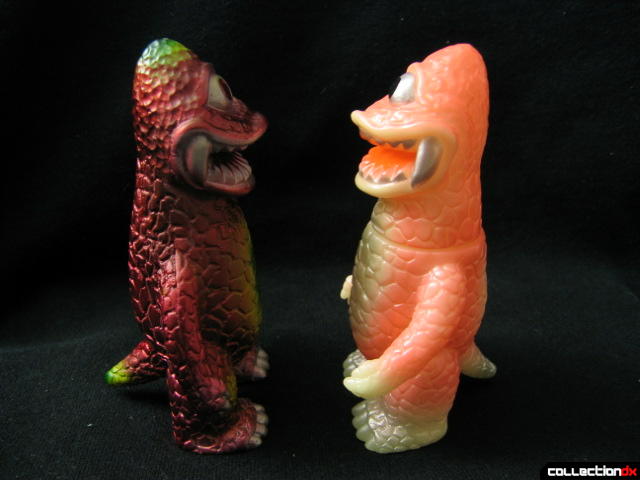 Other than the materials and arm sculpts, they're pretty much dead ringers for one another. The only other difference is the obvious neck joint on the vinyl.

That's it for now. You can follow the latest Gargamel news on Skullbrain. 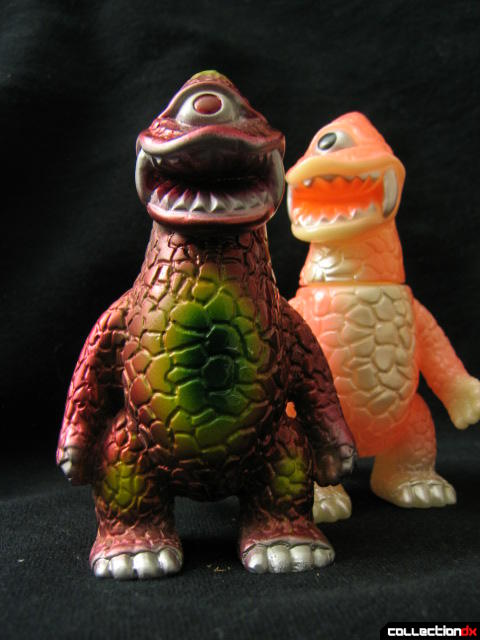 I dunno man, I appreciate the thought, and the homage to the "classics", but it seems so misguided. These, more than anything, reek of overpriced art pieces more than anything else. They aren't articulated, the quality isn't great, the box, while a nice tribute, really doesn't reflect whats inside. I think if popy / bullmark / takatoku tried to put something out like this that did absolutely nothing, it would have been a flop.

In vinyl, this thing is great, but even so much as making the arms move makes all the difference. Its just not for me.

Sure, it's absolutely not for everyone, but I look at this this way: it's all about appreciating the effort and that thoughtfulness in paying homage to the Zinclon toys. I mean, there's not a whole lot else to this thing!

FullyVisual is a one-man operation. To create something actually on par with the Bullpets is just not within the scope of pretty much any independent toy-maker. I mean, look how damn difficult it is for a company as prolific as Super7 to put out a blow-molded polyethylene Jumbo Machinder.

Gargamel and FullyVisual did the best they could with the resources available to them...and they still managed to capture some of the soul Bullmark diecasts have. If you own a Bullpet Godzilla, pick it up in one hand...then pick up one of these in the other. The size, the weight, the paint and the finish--it's all the same.

And that's for better or for worse! If you look closely at the pics above, the finish is far from the perfect, mirrored gloss of a car's factory showroom, but it's exactly like the rough, unrefined finish on any Bullpet.

Sure, you can argue that without any articulation, this is just a colorful paperweight with an "art toy" pricetag. Tough to say anything to contradict that. But again, there's absolutely no doubt in my mind that if they could do more (add articulation or any of the wacky gimmicks/accessories that the Bullpets had), they assuredly would have. To my knowledge, this is the first independently-made designer kaiju toy done in diecast.

So, given the market and the effort involved in making this, I'd say the price is perfectly understandable. Remember: some of the vinyl mini Zags go for more, and all they offer is a turning head: no arm articulation there, either. And, besides, if any casual 'net surfer happened upon our website and saw the prices we regularly pay for "just toys", I'd say the price argument is somewhat moot!

But you're right: if Popy, Bullmark, or Takatoku had made something like this in the past, it would have flopped. But the thing is, they made toys the likes of which had never been seen, to be played with by young children. This is a collectible made for those young children all grown up! ;)

I'm not even too enamored of this in vinyl. A $160 diecast, especially one that essentially looks like it has a big crack running down the side, doesn't speak to me at all. Besides, monsters shouldn't smile.
Robots can smile, but not monsters!

For this to be a good homage it needed at least one missle launcher.God I miss toys that shoot stuff.