The big but lovable lummox Bulkhead accidentally smashed up some life-sized animatronic dinosaur displays at the drive-through Dino Drive amusement park. Fortunately, Professor Sumdac agreed to take in the damaged robots. As he worked on them in his private lab in Sumdac Tower, his secret alien companion, Megatron, finally made himself known to be functional after 50 Earth years of inactivity, and pledged to help Sumdac by using his superior, um- “Autobot” technology, to help him repair the mechanical animals. Together, they upgraded the animatronic dinosaurs into more independent and sturdy Dinobots. However, Megatron had instead provided the unawares Sumdac with the means to make the Dinobots into powerful drones which then only he could control. For the most part, Megatron’s secret plan worked, and the three rebuilt Dinobots rampaged across Detroit. As expected, the real Autobots intercepted the curiously-autonomous Dinobots. With the help of Sari Sumdac’s All Spark-enhanced key card, they were able to disable the Dinobots, which were then turned back over to Sari’s father. While Prof. Sumdac was out of the lab, Megatron was surprised to find that the three Dinobots were now behaving as if they had living Sparks of their own, which he had not planned for! Convincing the dim-witted Dinobots- now called Grimlock, Snarl, and Swoop- that cars and the Autobots were monsters that had destroyed dinosaurs, the three brand-new Cybertronians challenged the Autobots. Through a hard battle, the Dinobots were finally out maneuvered, and defeated. As their hulks sat waiting to be sent to the scrap yard, the sensitive Autobot ninja Prowl noticed that the Dinobots were giving off signs that they might be more than simple Earthly robots. And so, to help redeem Bulkhead, together they- without Optimus Prime being aware- secretly stole the three Cybertronian dinosaurs to an abandoned island in Lake Erie, and left them there to live in peace with nature using some of Prowl’s holographic technology to shield them. But then, after the two Autobots had departed, Grimlock- who became irritated with a cute bird- suddenly and quite unexpectedly transformed! Swoop does not speak at all, but does screech like the pterosaurs he represents. 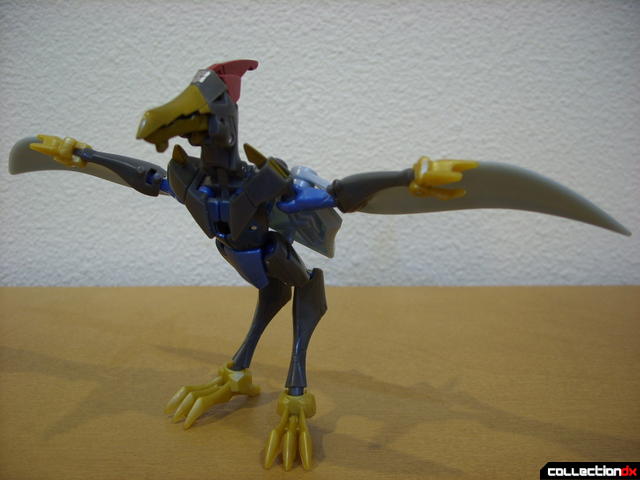 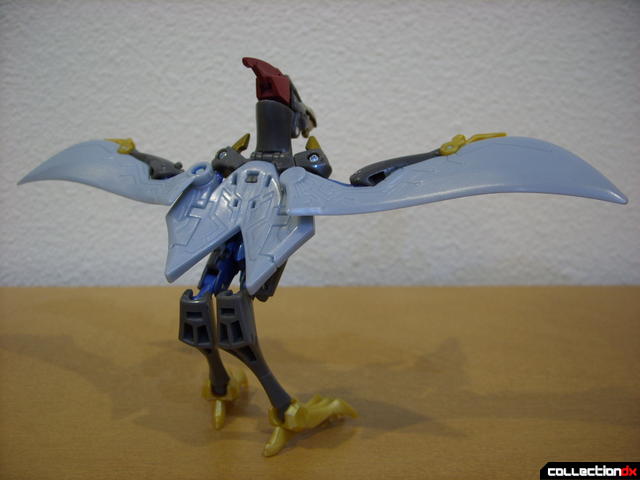 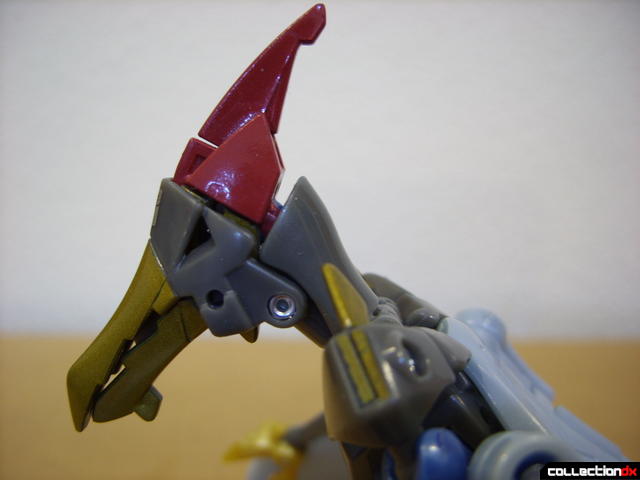 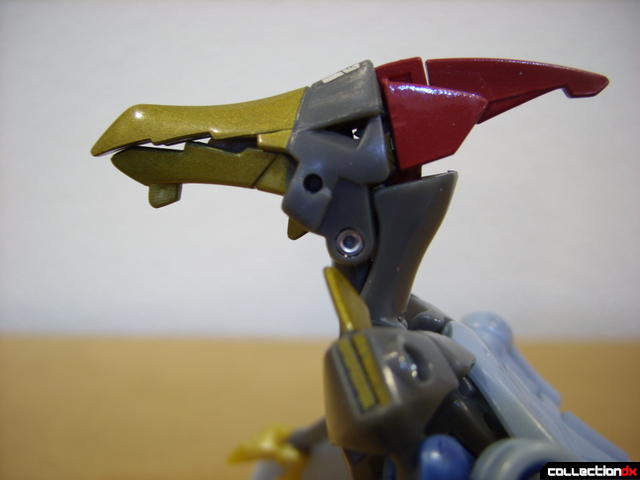 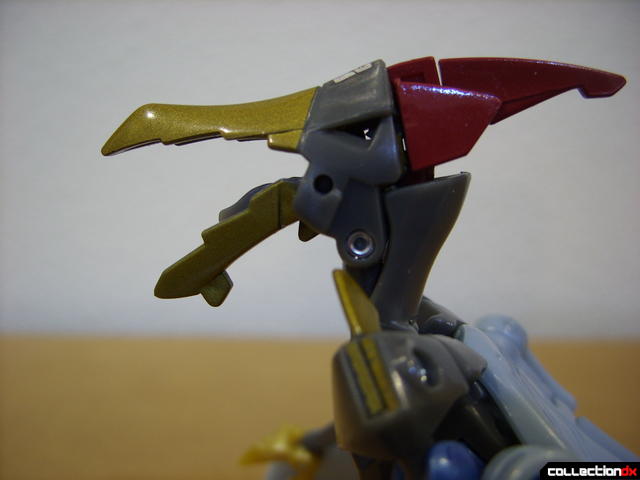 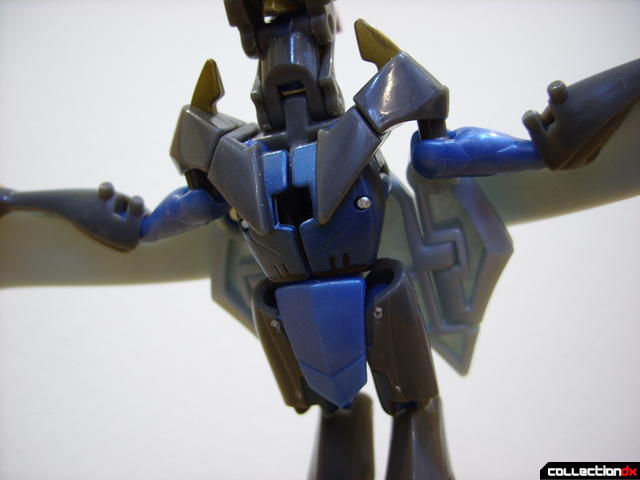 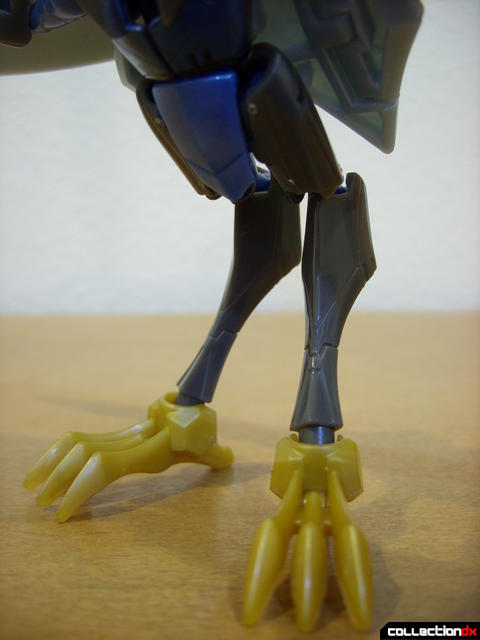 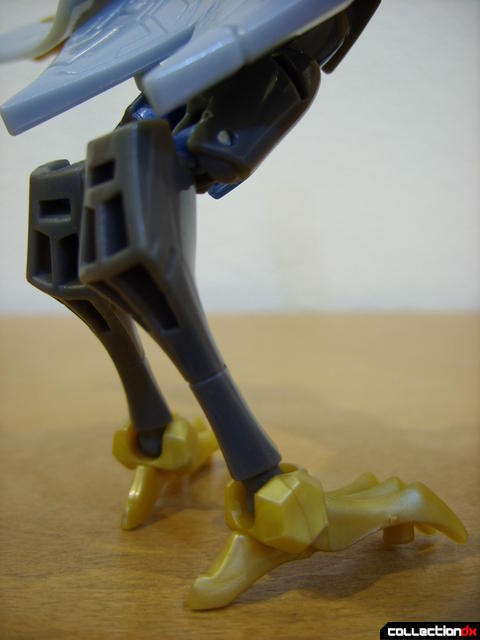 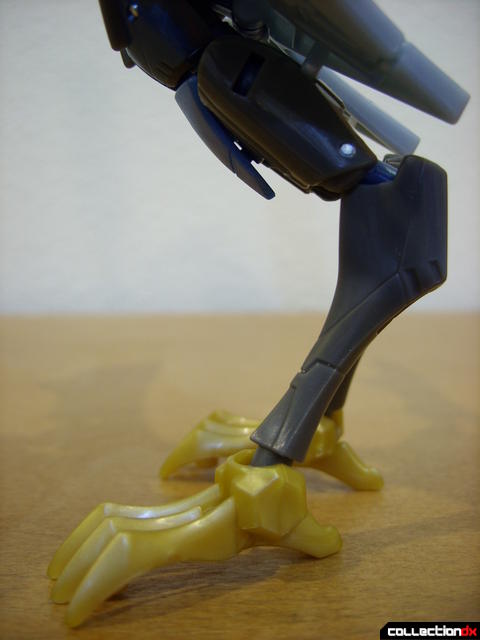 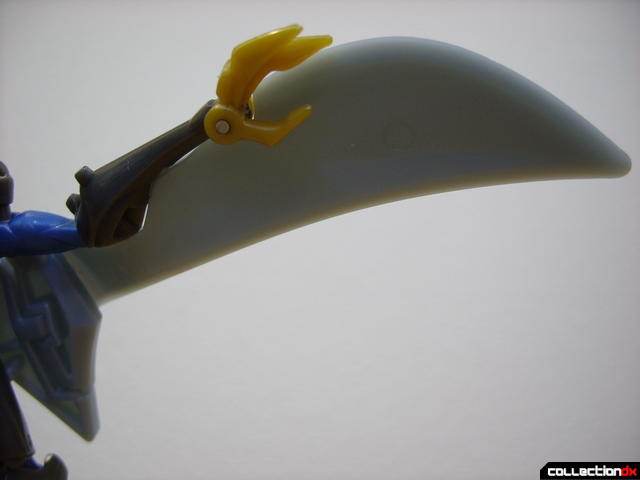 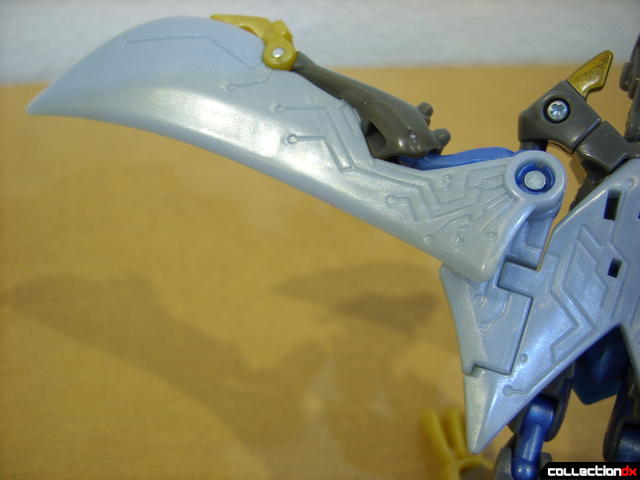 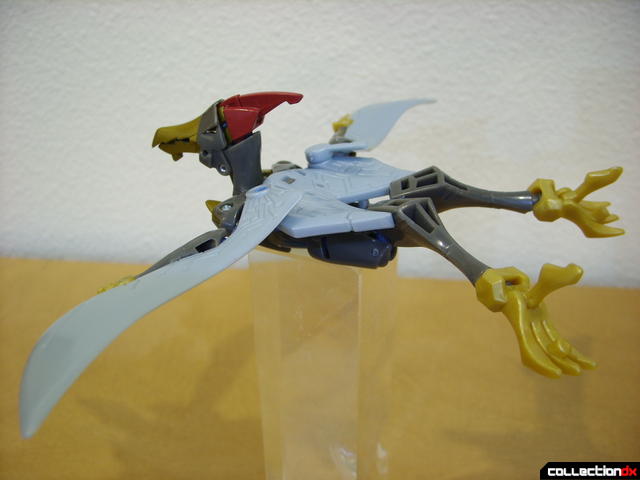 The shoulders in the wings are just-so so that the wings can be angled downwards a bit. 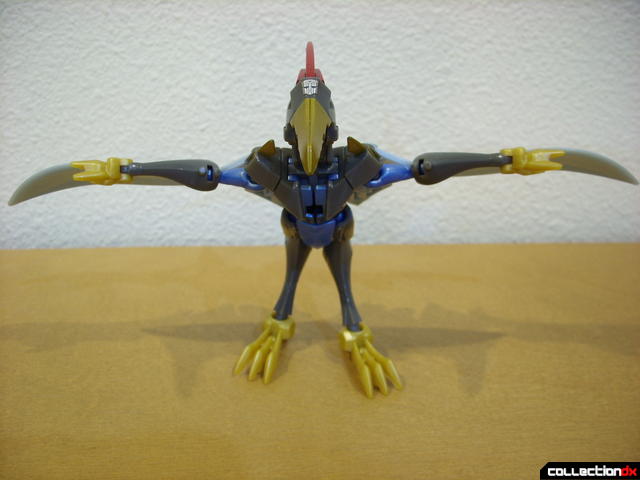 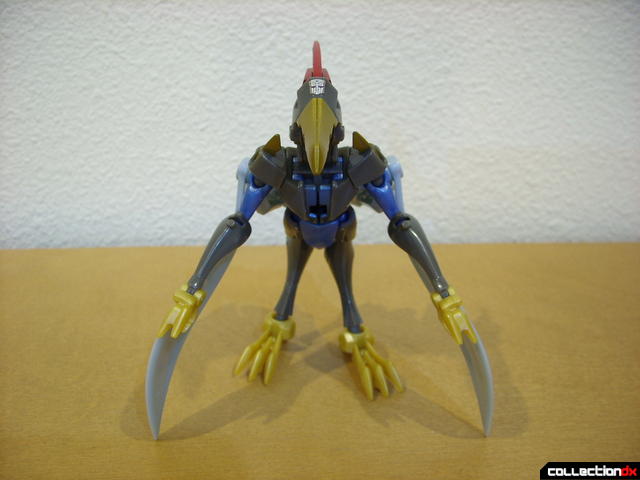 The eye sockets are hollow, and you can see his robot mode eyes underneath! (It’s too small and dark, so I couldn’t photograph it.) I read that pre-production designs had Swoop featuring light-piping inside his robot mode head (how?!), and this would have extended to his eyes in beast mode, but that specific feature obviously did not make it into the final production model. 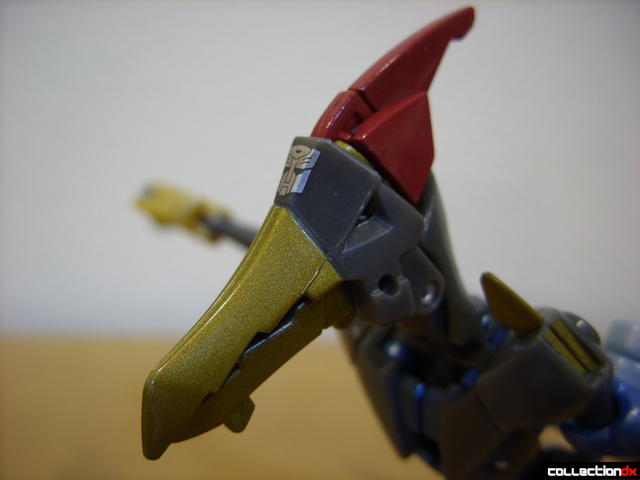 Swoop’s flail weapon cannot be stored anywhere on him in Beast Mode. One little detail I can’t figure out: why is the wing joint on the left side exposed, and not the one on the right? There is no difference in functionality and form, it’s just… exposed. (I don’t get it!) 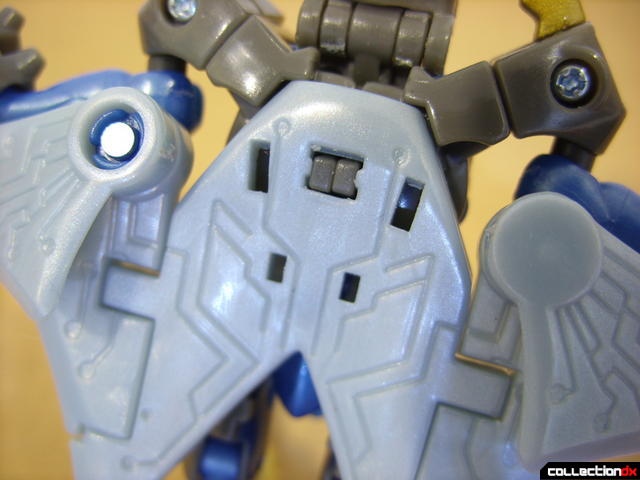 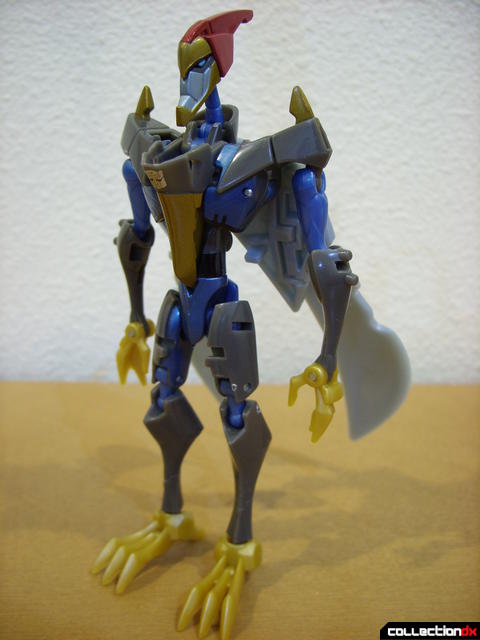 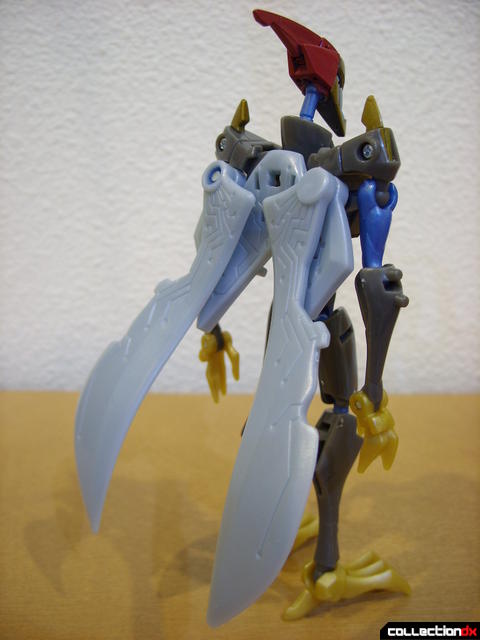 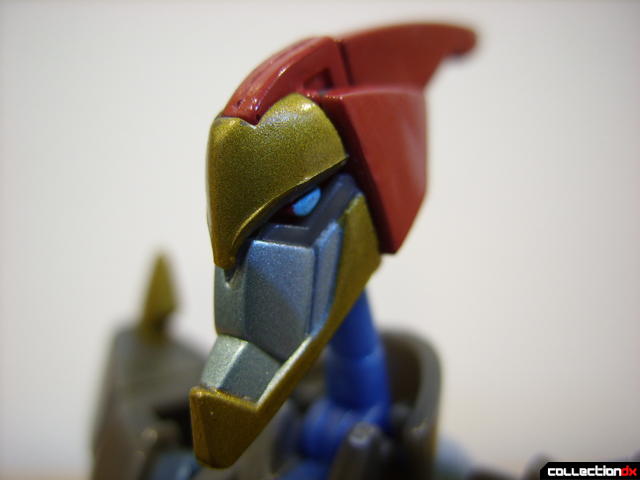 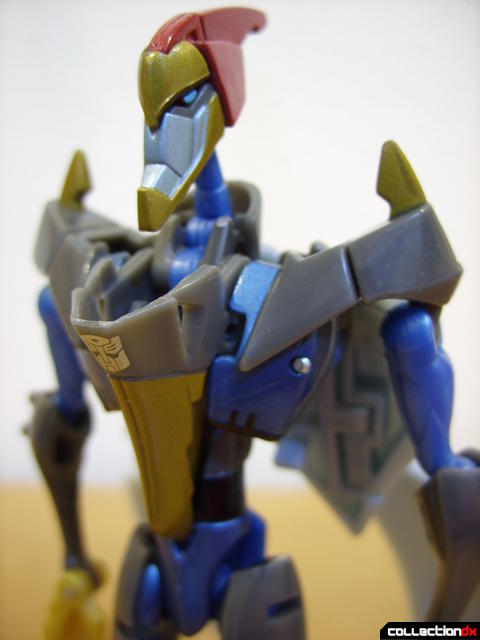 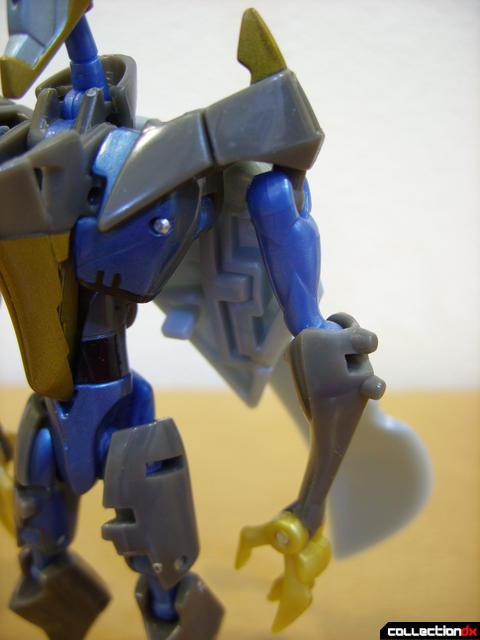 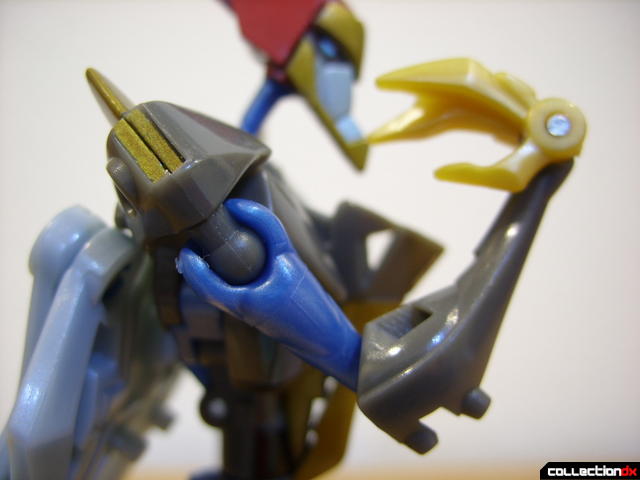 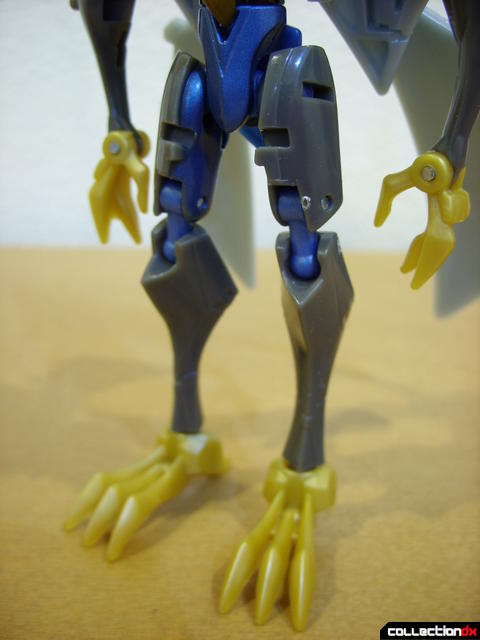 Despite being on a ball-and-socket joint, Swoop cannot point his head upwards because it easily pops off! However, it can still effortlessly turn side-to-side. 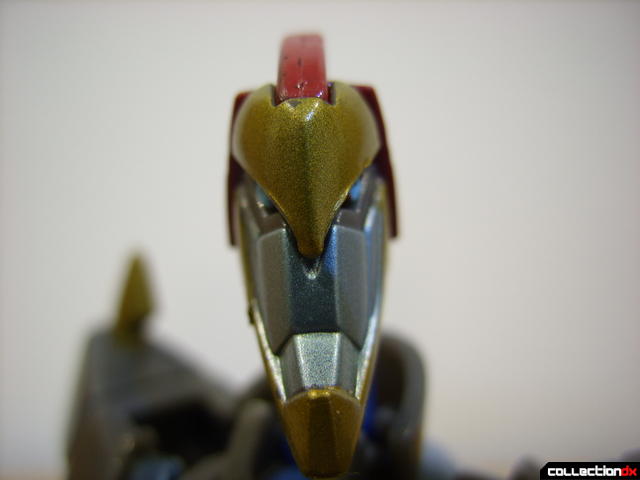 The arms were obviously crafted to to preference Beast Mode and line-up with the wings. Because of this, a separate section of the torso can twist up-and-down to compensate. Unfortunately, the blue ball-and-socket shoulder joint bumps into the torso, restricting motion upwards to about 45-degrees. It can be forced upwards more, but this is not advised as repeated pressure on the ball-and-socket joint may finally break it! 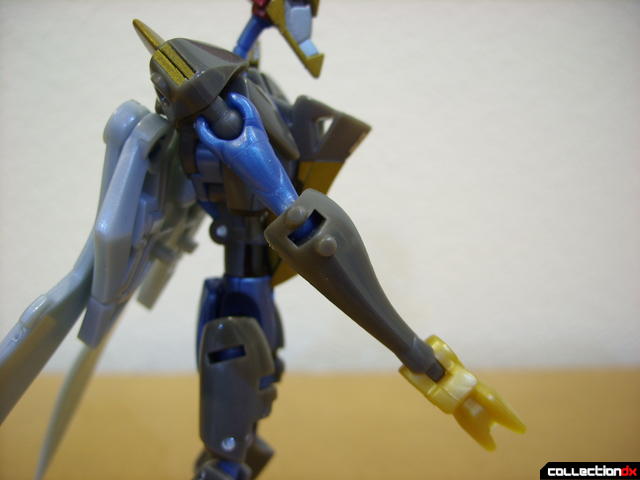 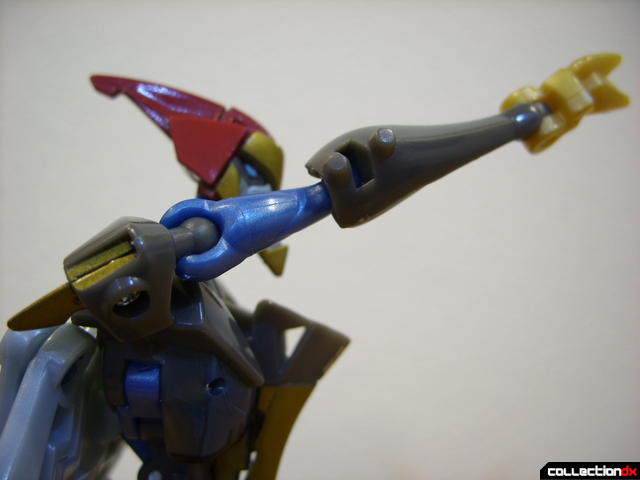 Though the wings do not collapse down more, Swoop is not seen flying in robot mode in the series, so they always look like coattails or a high-collar cape. However, they are still capable of flexing on the toy. 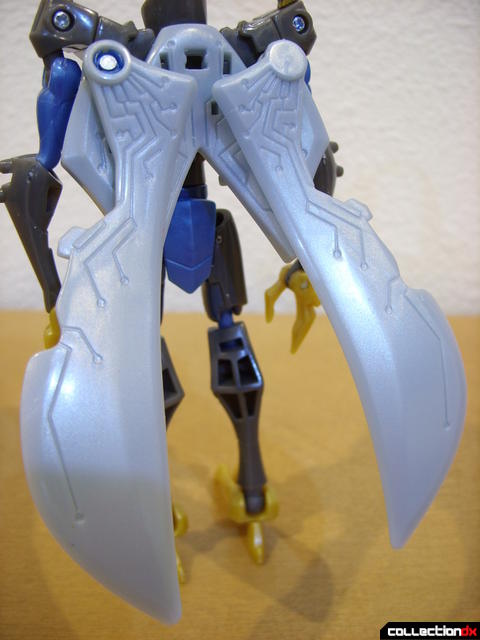 Swoop has a waist joint for transformation, but it is locked in place by his beak. (Lifting up slightly on the upper half of his beak will free the joint to be posed with.) Despite having hands with fingers in a fixed-open position, he can still hold on to the handle of the flail! This is because the handle has small groves into which the fingers fit, and friction holds it in place. (You don’t have to ‘wedge’ it in place either; it fits relatively comfortably and securely, even despite the weight of the weapon!) 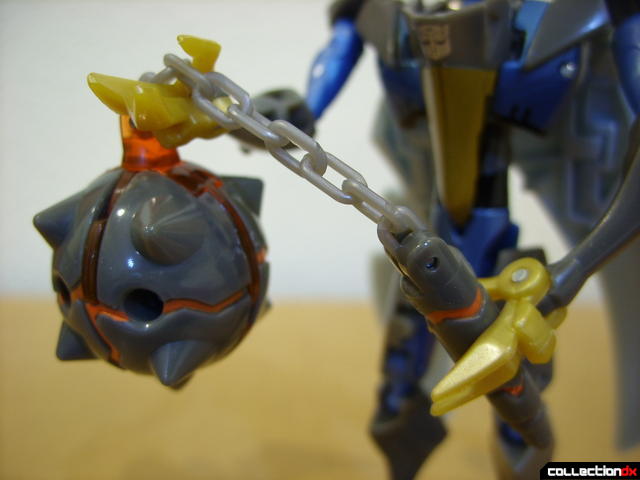 Unlike his fellow Dinobot toys- Grimlock and Snarl- Swoop’s weapon does not have a spring-out feature. However, pre-production information says that the transparent pieces were originally designed to spring out like little flames! Photographs and videos taken by Trans-fans suggest that, if taken apart and modified carefully (by a responsible adult-only, thank you!), the flame extensions can be made to move in and out as originally planned. (Supposedly the fear was, if swallowed, the points of the spring-out flames would make it even more difficult to dislodge.) 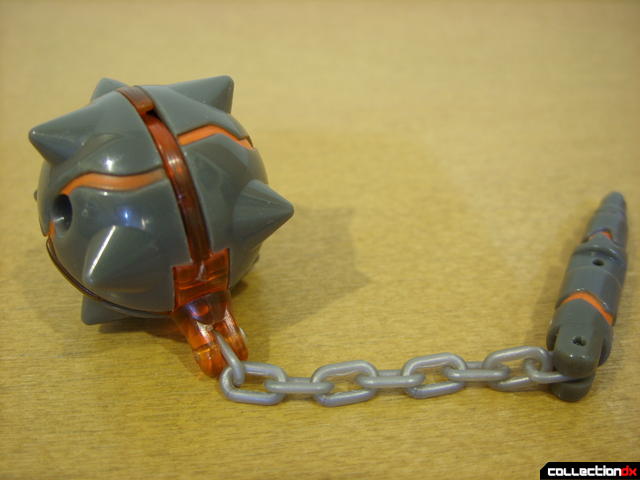 For such a thin and short figure (it’s easily the lightest-weight Deluxe-class Transformer® I own), I am still awed at the craftsmanship that goes into the “Transformers Animated” line. Other than a little difficulty moving the wing-base panel up and down on his back, the transformation is near-flawless, and yet not so simple as to be intuitive. And yet, with little exception, the toy line is never plagued by screen-accuracy issues- both modes look just as they are on-screen, and yet functionality is not lost. (Okay, he has four fingers in the show, not the three on the toy, but meh.) For a figure this small, that is saying a lot, and it becomes even more impressive. While the wings are a bit awkward in back just appearance-wise, there are only two problems I have in the entire toy. The first is in the shoulders- the blue ball-and-socket joint(s) bump into the torso pieces, limiting how far up/backwards the shoulders can tilt. (You can force it past if you like, but that may wear down the joint’s plastic and eventually break it.) And despite the two available ball-and-socket joints per arm, no amount of twisting the upper arm around will yield entirely-satisfying posing as is traditionally expected. And the other is the absurdity of not being able to angle his head upwards! It’s got two joints that are supposed to angle upwards… and yet they can’t! 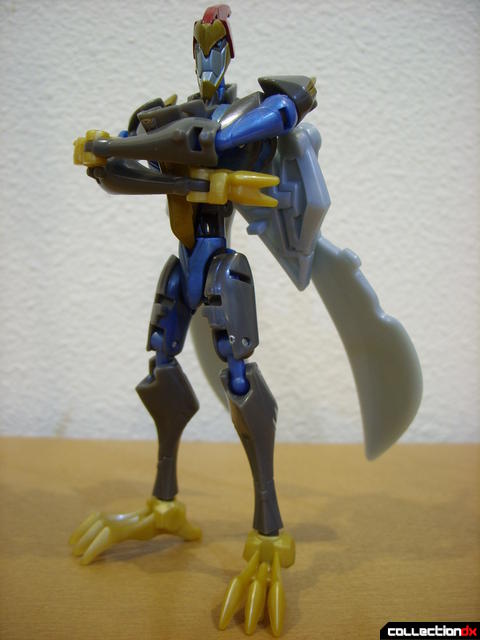 Posing & weapons features, transformation, on-screen accuracy, practicality, materials, paint apps… this toy does no wrong! I’ve said it many times- some of the smaller-sized/-priced pieces in my collection are often times some of my favorites, and granted it's not my top-favorite, but Deluxe-class Autobot Swoop fits into that niche quite nicely!

Actually, if you put him in a flight pose, you can store his weapon. The circular pegs on his feet plug into the screw holes, allowing him to grasp it with his feet, IIRC. Of course, this only works in a flying pose.

Awesome! Just tried it. It totally works! :D Thanks!

"Me swoop no see nothing."

What happened to 'What they don't tell you in the instructions?', then?

(*cranks handle on record player, does not play*)

Hopefully they make the other dinobots in this line... Just three doesn't cut it.

Much to my dismay, the excellent Animated show and toyline are pretty much over, save for the few figures we saw at last year's Botcon (Blackout, Arcee, Ironhide, Rodimus). Our only hope is they'll make the Dinobots for whatever the next cartoon/toy tie-in is. As it is, I'm just surprised we finally got a Dinobot other than Grimlock.

Loved this toy! We lost the head off one, and bought another immediately, he's so fun!

Is there a single chunk of plastic that makes up his eyes and extends into some part of his head's crest? I've noticed several recent Transformers toys which have a transparent chunk of plastic that should have been used for a light-pipe feature, but for some weird reason the piece is painted or cast opaque - deleting the light-pipe eyes feature. I haven't bought swoop yet myself, but it does look like the piece at the top or his head/base of his crest is a different grade of plastic that's painted but doesn't appear to have been intended to be painted.

My suspicion is that in those instances the eye & head coloring required by the light-pipe capable plastic changes the color design for the head in some manner unacceptable by Hasbro's trademark & branding department.