Today I will be reviewing the Death Garry Gun DX re-issue, made by Sonokong/Takara. The sample for today's review was provided graciously by our friend Jeff Stein over at High End Transformers. Please check them out or just click on the Ebay link at the bottom of the page for a direct link to the item reviewed today.

Death Garry Gun is from the anime "The Brave of Gold Goldran" and is the personal flagship of the main antagonist Zack Walther. Death Garry Gun or DGG for short is the successor to Zack's old flagship, Zazorigun. In robot mode it DGG is armed with chest beams and rocket punches. DGG's alternate form is that of a gigantic battleship. Death Garry Gun was so strong that only "The Great Goldran" himself could defeat it. Because of this fact DGG was mass produced with a total of five units made. Note* The original toy was the Autobot Sky Garry from the Japanese "Transformers: Return of Convoy" toy line.

To start off with, Death Garry Gun comes to you in a beautifully illustrated, heavy corrugated cardboard box shown below. I know I have said this before, here goes the broken record......I am a fan of the packaging used on these Sonokong re-issues and the quality continues with DGG. 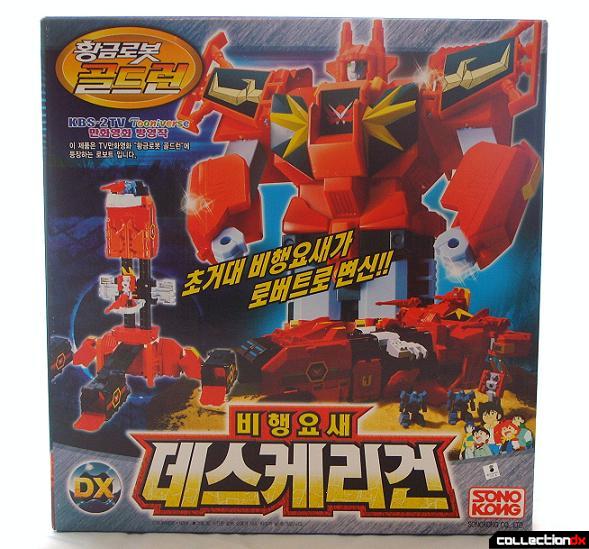 Upon opening the box you will find a very sturdy, well made figure that should handle years of hard play due to the quality plastics used in manufacturing.

Space Battleship mode is one of 3 modes that DGG is capable of transforming into. In this mode DGG is over 14" long when carrying its full payload of transport van/containers. 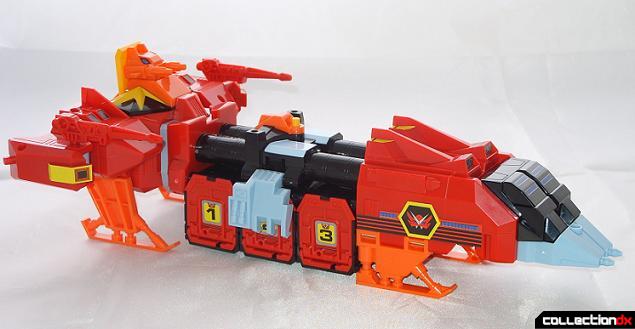 The 3 containers have opening door that allow you to carry the included mini figures inside them. 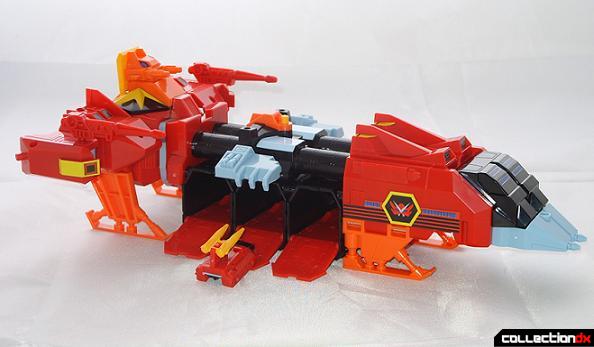 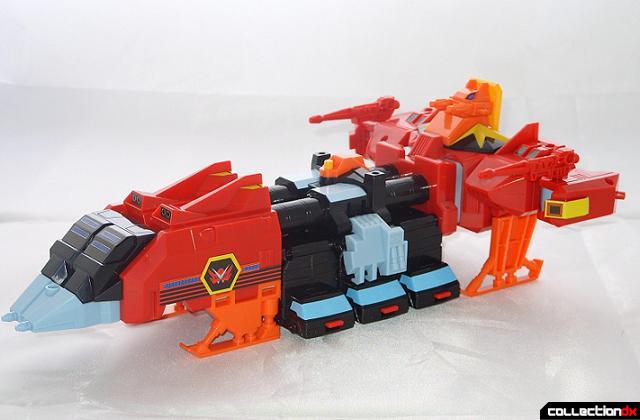 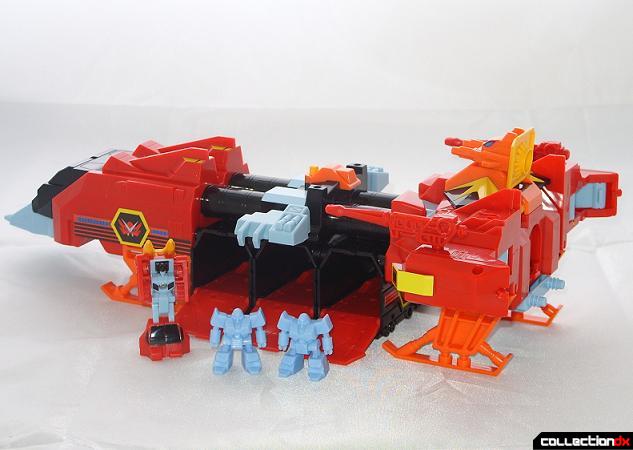 The 3 included mini figures are: 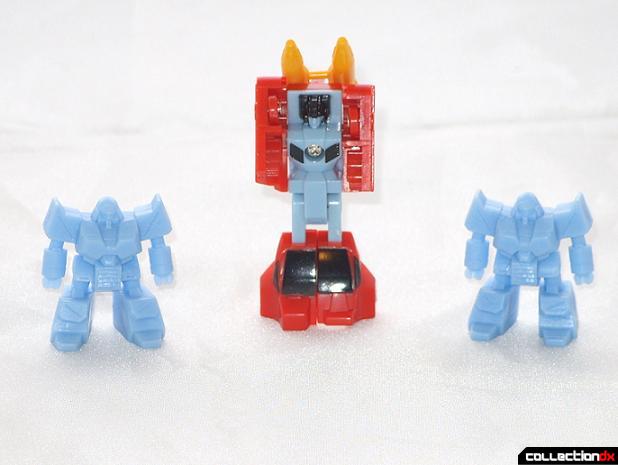 DGG's Containers can be deployed by simply pressing the yellow button shown in the picture below. 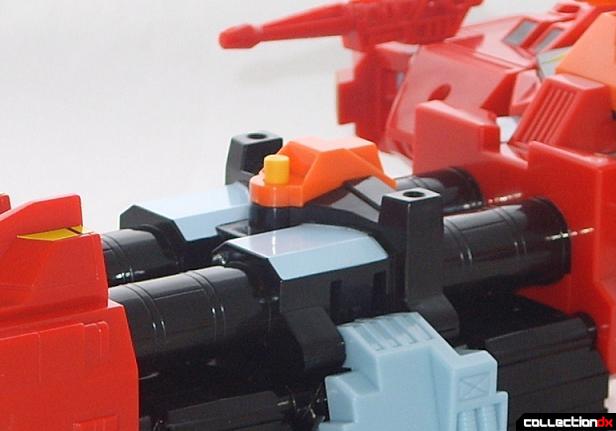 DGG's mid-section can be lengthened or shortened depending on the amount of containers you may want it to carry into battle. 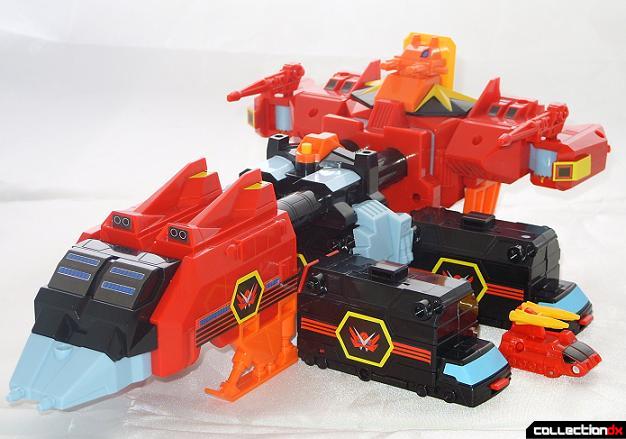 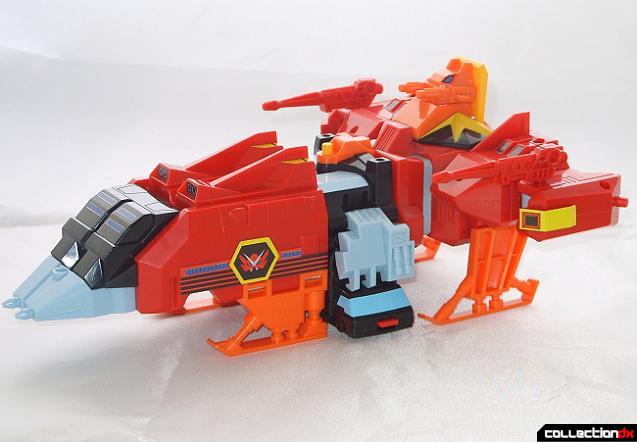 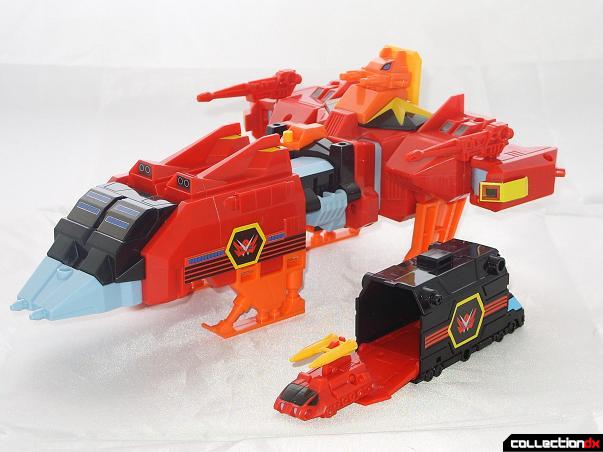 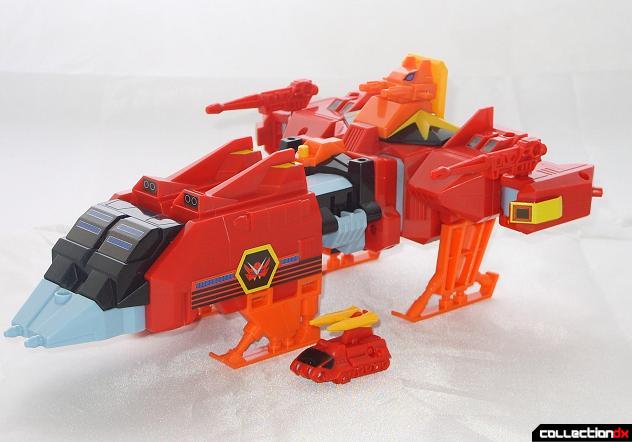 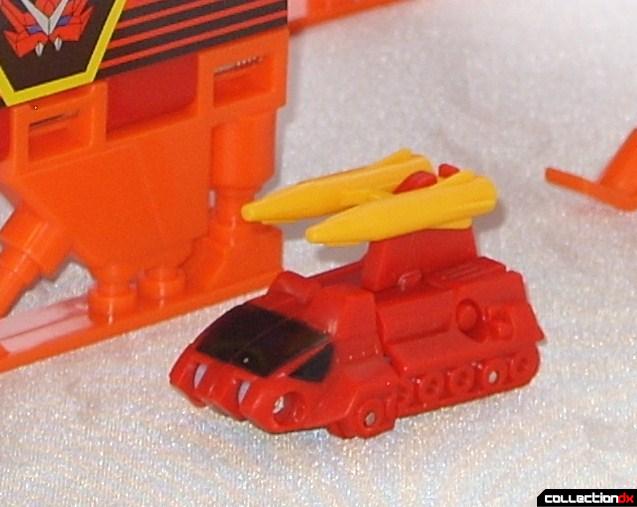 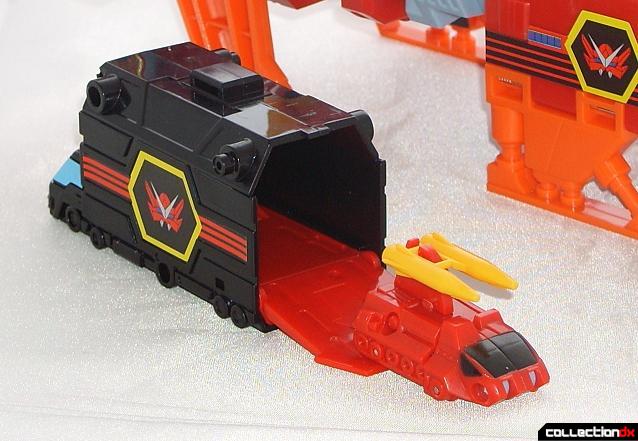 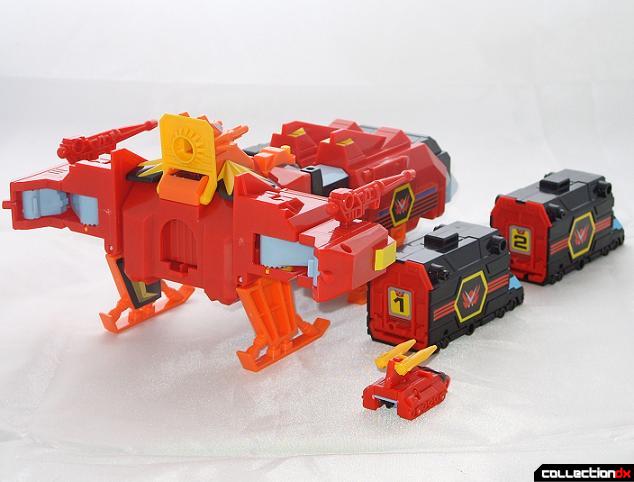 The next mode of Death Garry Gun is the Battle Platform Base mode. As you can see in the photo's below, it is a very simple mode that basically has DGG in a handstand with the mini figure manning strategic battle posts. 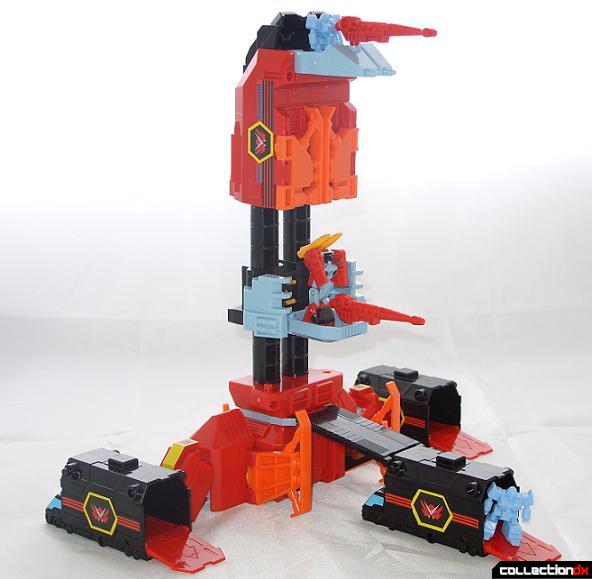 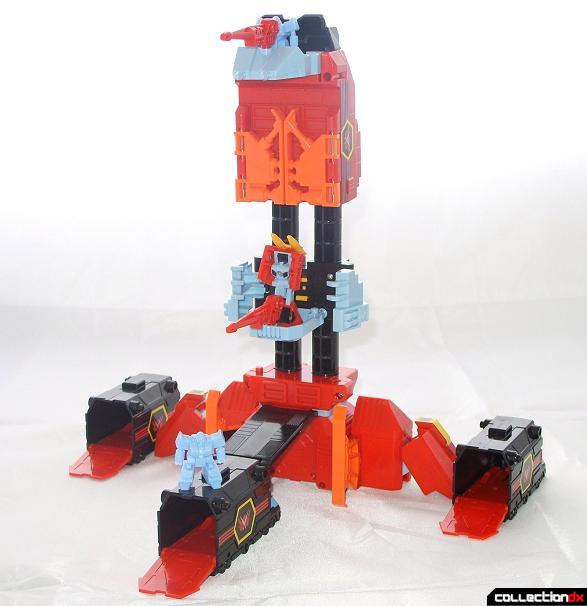 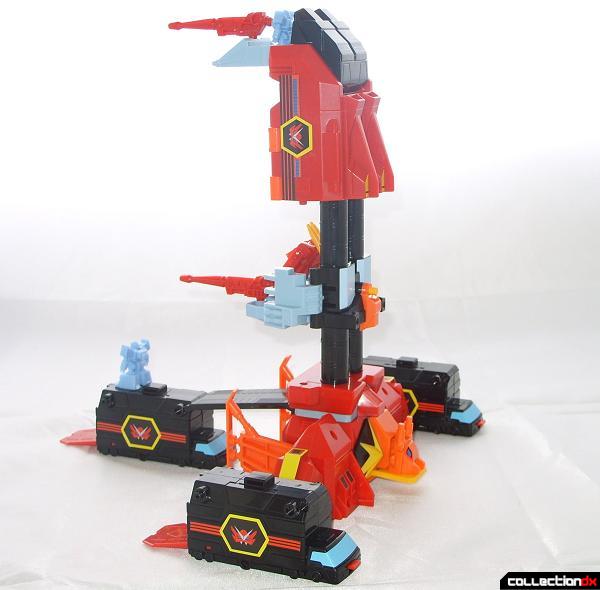 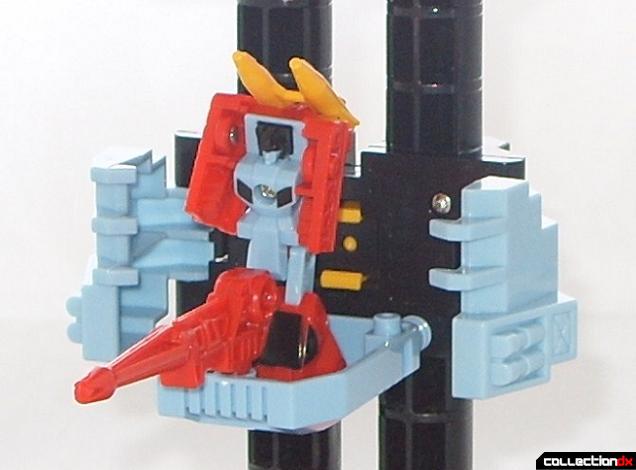 Robot mode is DGG's final mode of transformation and is my most favorite. You can check out the transformation of Death Garry Gun in the video below.

In robot mode DGG stands 9.5 inches tall and has limited articulation found in the shoulders and elbows. The legs are just a solid mass making the figure almost a brick. DGG can be equipped with 2 laser rifles that are shown below. 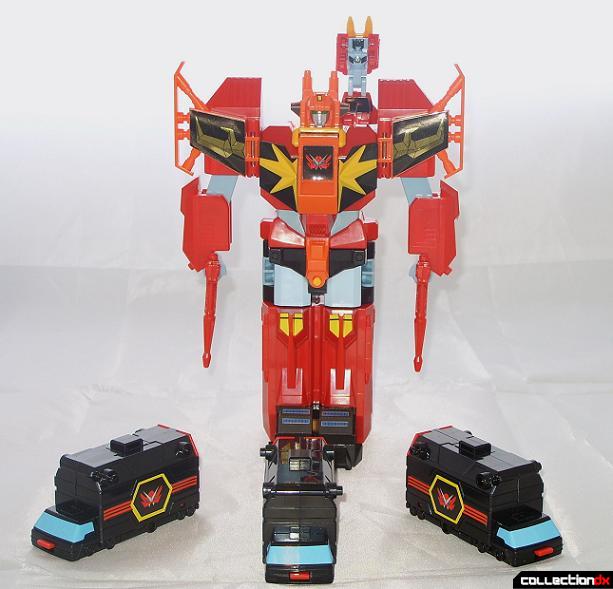 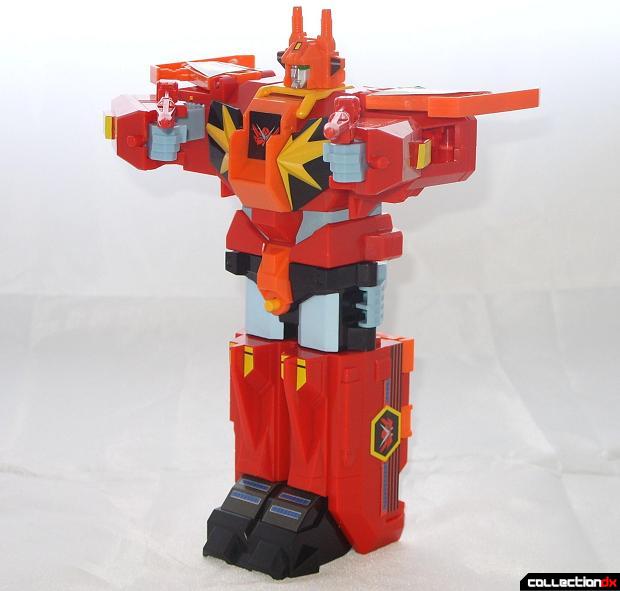 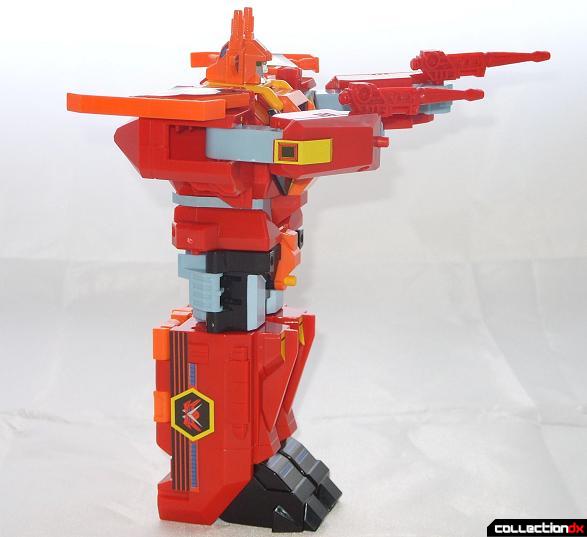 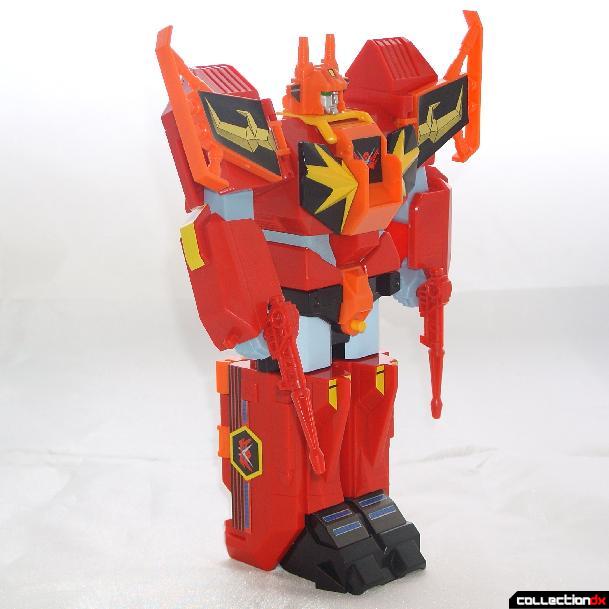 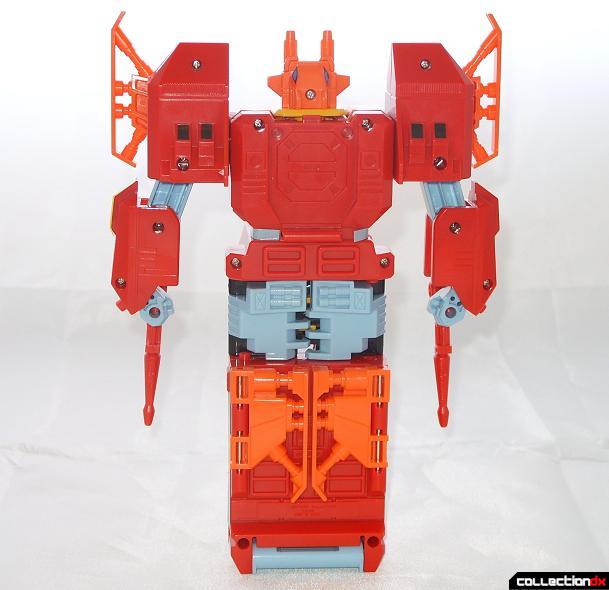 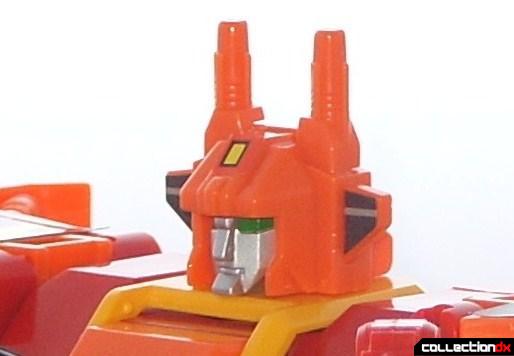 In conclusion, even though this toy has the articulation of a brick it still has a ton of play value, making this a must have for Brave Series or Transformers collectors alike.

Y'know there's one thing I noticed about Goldran, other than that it's not very popular. It seems to me that all the side mechs are way cooler than the main ones in that show. Just look at this guy, HE'S HUGE!

You kidding??? I can't speak to the popularity of the show, but the main robot from the show, Great Goldran is absolutely AMAZING!! It's absolutely one of the best combining robot toys ever...and while this toy is totally awesome, it just doesn't hold a candle to the main man.

I have 'im, but I sure wish they'd re-release him. I hear the gold chrome plating on the original releases flakes off in time. I haven't noticed this on mine, but I'm sure afraid of that happening. From what I'm told, new toys don't have this problem...

Anyway, if you ever get a chance to pick up the Goldran DX, Sorakage, and Leonkaiser sets, do it. Even if they're pricey, they're so worth it. Probably my favorite Brave toys of all time...

Sanjeev,
They did a re-issue of Goldran, I have it, actually I have the re-issue of Sorakage and Leonkaiser too. Your correct, its a great set and probably my most favorite also.

Was it a true reissue? Or was it just the Korean Sonokong version that came out at roughly the same time? Like, my Sorakage is the original Japanese Takara release, but my Leonkaiser and Goldran are older Sonokong releases.

...That is...unless the Sonokong releases came out more recently than I thought...

So, do you mean there was a recent-ish reissue *other* than the Takara and Sonokong ones I have?

OH! There was an all-gold chrome version, right?

Hi Sanjeev,
I have the all Gold Chrome Goldran. it is a re-reissue that came out last year, so I assume it is newer than the ones you have

Lol Dan, you don't have to copy the romanji.

I know, but its so cool! LOL. Special thanks to you Andrew for hooking me up with the info on this character.

It's also clear to note that Missile Gear (MISAIRUGIA) is very similar to G1 Windcharger. Other than the big deluxe G1 revamped toys, that's the 1st G1 mini-car bot that I've noticed in the Yuusha Brave franchise.

Nope, not Windcharger. That's a repaint of the Micromaster that originally came with him, Sonic.

even though it's based on a Mircomaster toy, it still reminded me of G1 Windcharger after all.

Come to think of it, even G1 Sky Garry resembles G1 Ultra Magnus.

Wow, another great review... this is definitely a Brave reissue I should pick up, I LOVE the Sky Garry mold, and the fact that this guy comes with three transports instead of one in SG makes the dropship mode so much more fun. I love all the old huge TF/Brave figures that have base modes and offer so much play value!

Speaking of Space Battleships that turn into robots, is there any chance you'll eventually review the J-Ark toy?

I love that Battle Platform Base mode! It's like a little bit of Microman thrown in just for fun. Great stuff!

Looks like you got a soft spot for Transformers after all. :)

Transformers are great... in moderation. :) Seriously, if money and space were no issue, I'd own lots of transformers.

Dave, I'm honored to see you're a Shogun Warrior by heart. Strong & mighty as steel just like Golion, wise & true as a bird just like Raideen.:)

Raideen, the father of Braves.:)

FYI, one of my all-time favorite Microman lines is apparently being reissued in Korea. Including the Playstation Base!:

If you like Microman bases and don't have this one yet, get it! It's much more fun if you get all the accompanying sets, since you can mix-and-match parts. They are also coming out again. ^_^!

The main antagonist's name is Walter Walzack (first name Walter). Also its his flagship until he joins the good guys and his brother Sirius takes over. It doesnt ever transform under Walter's command (not sure why but maybe its because he didnt know about it since hes an imbecile and more of a comedy villain).

I have the Brave Revival Great Goldran as well and it is indeed Beautiful. Such a awesome design in shiny plastic.

Also I heard Goldran was the most poopular of the Brave shows (because of its humour as opposed to the more serious robot animes like Evangelion). GGG only ever took off AFTER the TV show was off air. Strange then that GGG seems to be the only thing people think of when you say 'Brave' to their faces...

My name is Gary, I bring you death, since I have two guns....and some micro trailers of doom. :D
Seeing this review, mademe notice what this toy is actually capable of. Great job. :) I never even knew that he had those smaller robots too until now. :)