In the Leiji Matsumoto universe, few items inspire the kind of awe and fear as the Cosmo Dragoon. Simple versions of this weapon appeared in the Space Pirate Captain Harlock manga and tv series, but it wasn’t until Galaxy Express 999 that this particular gun took on a mystical aura. The Cosmo Dragoon pistols were designed and built by the legendary engineer Oyama Tochiro, best friend of the space pirate Captain Harlock. The exact origins of how he came up with the design of the weapon is never revealed, though it is stated that their outward appearance was inspired by the 6 shooters of the old west. In the Leiji-verse there are 4 of these guns produced, each with its own “serial number” and owner. They are as follows:

Serial #2: Owned by Tochiro’s mother, later given to Tetsuro Hoshino on Titan.

As mentioned before, the gun gains most of its notoriety in Galaxy Express 999. It first shows up when Tochiro happens to meet Tochiro’s aging mother on the planet Titan. She gives it to Tetsuro saying it’s a gun that will protect you. The sheer awesome power of the gun is plainly seen when, upon first firing it, Tetsuro is hurled backward several feet from the sheer recoil of it after shooting down a small fighter plane. As the galaxy express 999 story continues, the gun plays several key roles in the storyline and overall plot of the GE999 Universe.

Having said all that, it’s obvious that there are several different toys and replicas of this gun out there right? Wrong... As a tie in with the Galaxy Express 999 film there was a cap gun toy of the gun made by the Marushin company, but it is woefully lacking in detail or accuracy. Over the years there have been about half a dozen or so garage kit resin replicas made, but these are hard to find, expensive (ranging from roughly $100 up to over $300), require a certain amount of skill to assemble and paint, and the end result is little more than a display piece. There was a very high quality metal and wood licensed replica released a few years back, but at a sticker price of over $800 it wasn’t really something most folk could afford. Skip ahead to 2007 and Taito corp., known for making small UFO Catcher crane game prizes come out with the item I’m reviewing here. This really came up way under the radar. I only happened upon an auction for one of these doing a random search on yahoojp. After I got over my initial “huh, wha?” I had one coming to me via a proxy service. 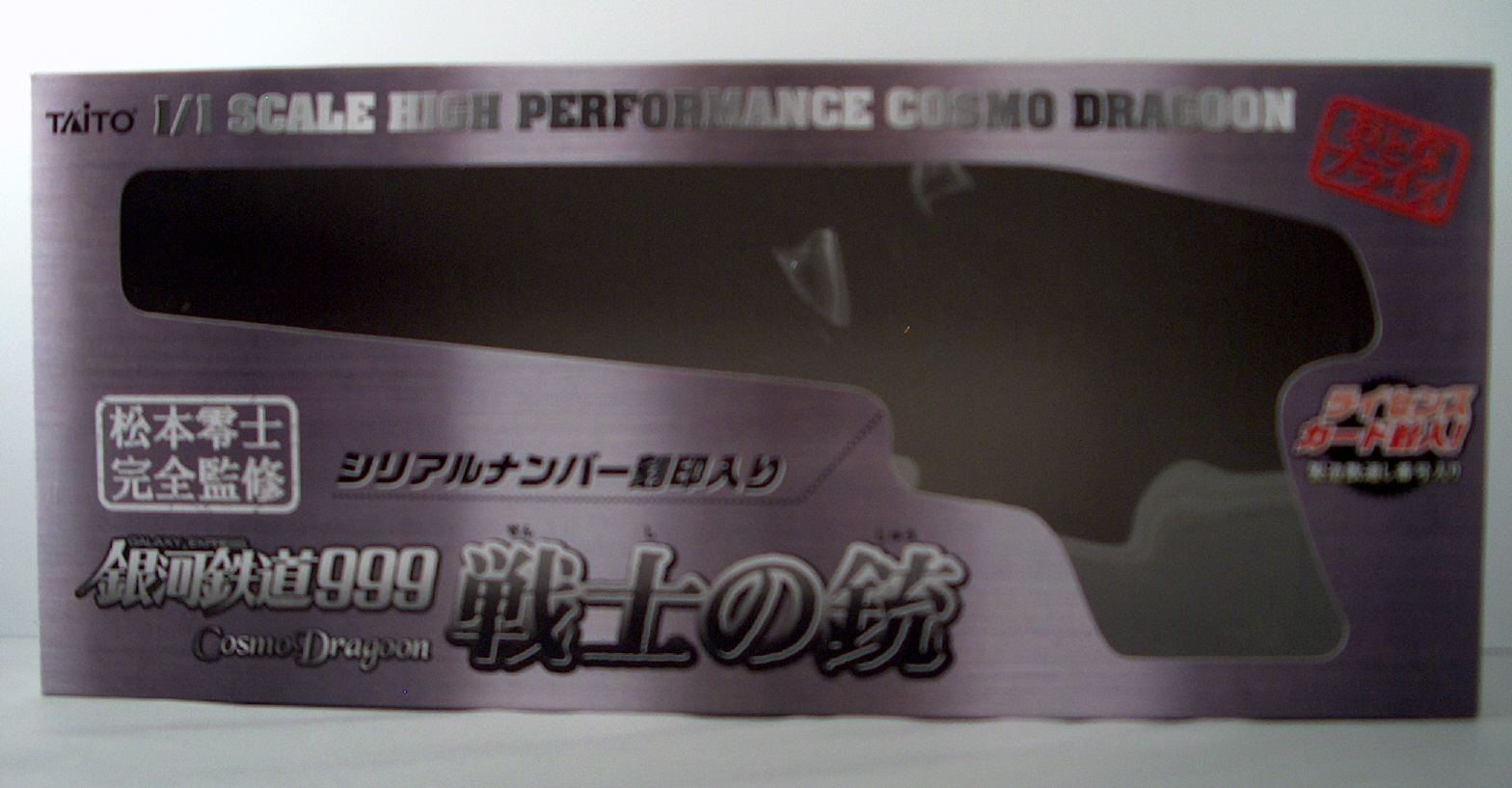 It’s really an awesome piece. For a cheap UFO prize, the sculpt, the details, everything is dead spot on with this replica. The packaging is pretty good for a crane prize. It features a nice image of the gun on the back with a brief description of it, as well as a punch out Galaxy Express pass. The front has a plastic window that shows the entire gun inside. The main reason for the window is so that you can check the serial # on the gun. Taito is releasing the 4 different serial numbered Cosmo Dragoons from the GE999 universe. It’s little more than a small number engraved on the gun’s cylinder, but it really is a nice touch. The gun is enclosed in a simple vacu-formed plastic tray and comes with a simple, but effective cardboard display stand and a license card “signed” by Leiji Matsumoto and printed with the gun’s serial number. I’m not too sure if this means they’re only making this in limited numbers, but it’s a nice touch regardless. The gun is held pretty tightly in the tray, mine got a bit scuffed up removing it so care should be taken removing it. 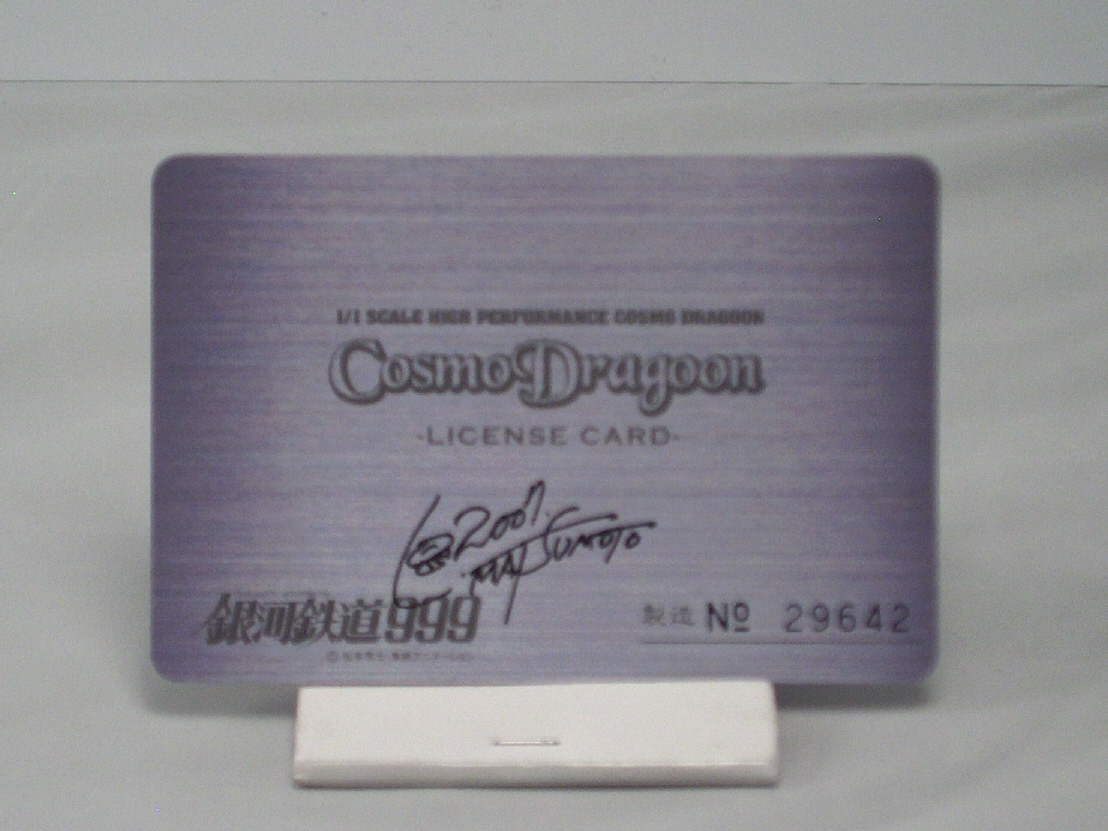 The paint job is very well executed, with a nice realistic weathered effect. On mine there wasn’t really any over spray or horrific blemishes. The woodgrain pattern for the grip seems to vary from gun to gun. I’ve seen pictures of some that look like fake 80's rumpus room wood paneling, and others that are very realistic (mine luckily is the later). The sculpt of the Jolly Roger in the grip is crisp and well painted. Besides the serial number, the gun is printed with the Tochiro patent date and location on the top strap and sides as seen in original artwork. Luckily there are no other trademarks on the gun. The entire piece is hollow styrene and features snap assembly. Looking it over, every little screw location, panel line and component location is as it should be. I’m really shocked at the details I found on an item such as this. 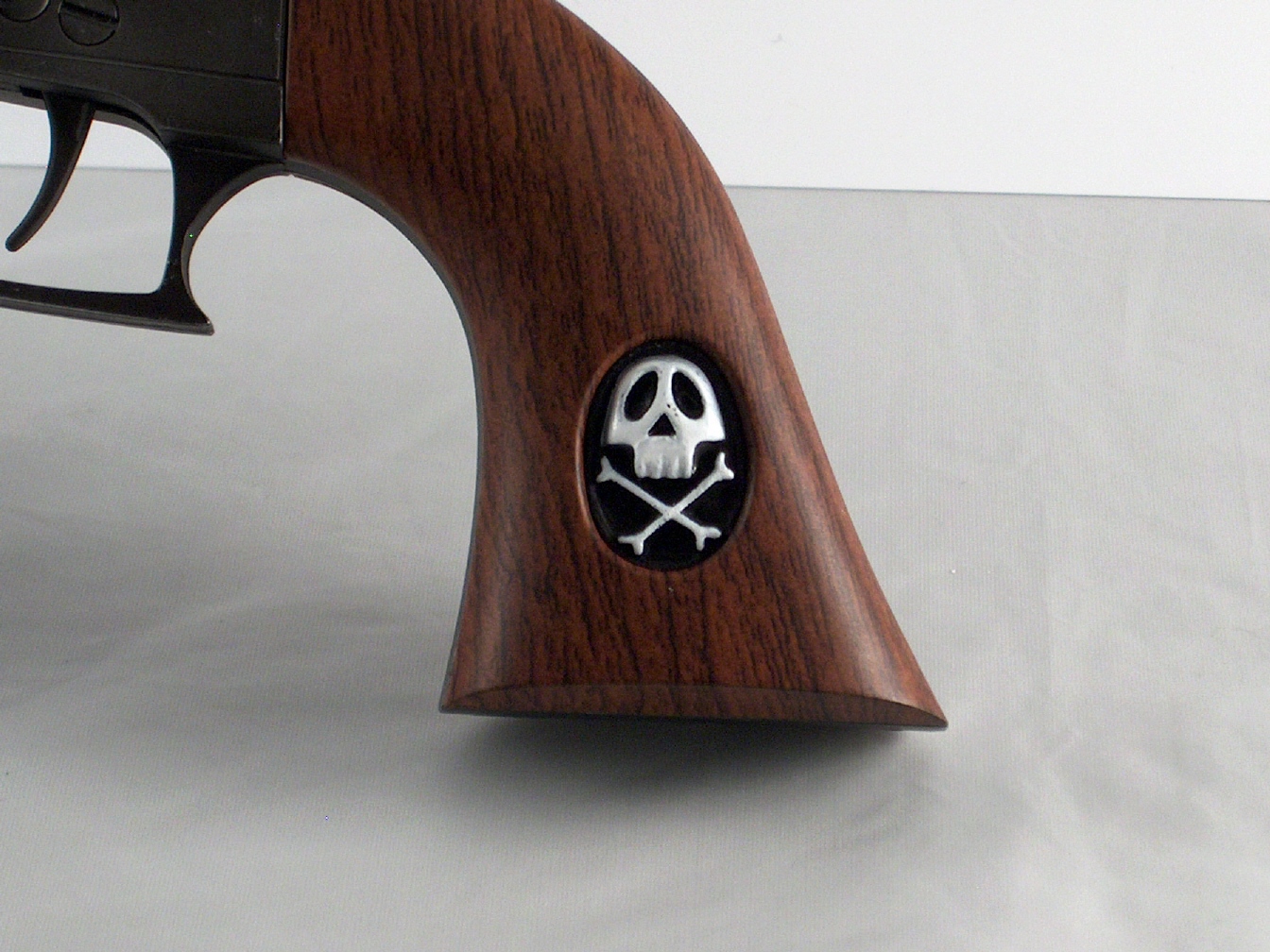 When I first saw this I had hoped that it would have an anime accurate firing action with a working cocking lever, maybe even light and sound action. Unfortunately, that isn’t the case. The only features of this piece are a rotating cylinder and working trigger. Overall this is really a neat item and I give it a 9 out of 10. My only gripes about it are the lack of heft and the lack of the working action. The weight issue could be solved by simply opening it up and adding material, and being a relatively cheap, mass-produced item, you don’t need to worry about spinning it on your finger and tossing it around. 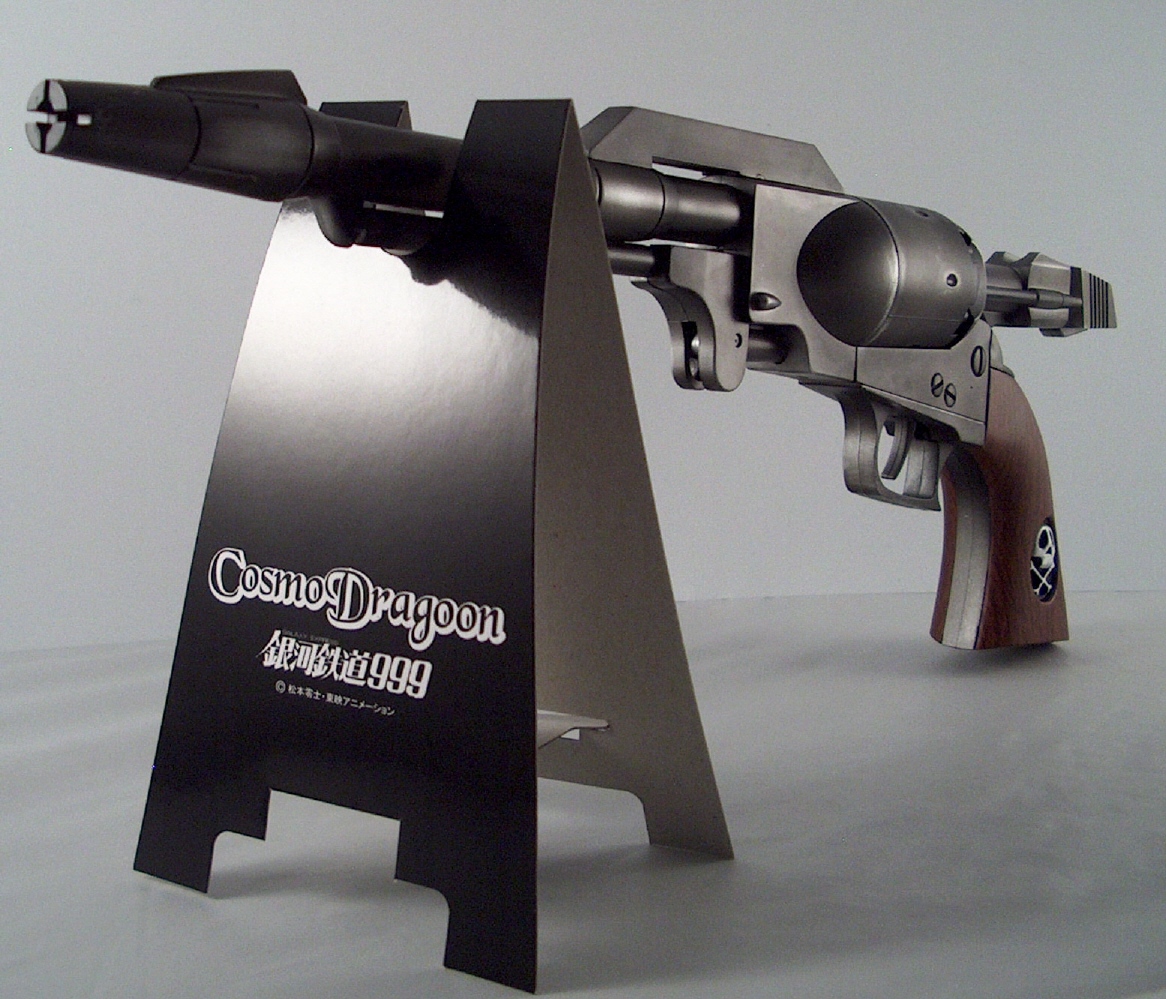 Being a realistic looking gun with no orange barrel cap, HLJ and other online importers won’t be importing these due to US toy gun laws, though that might change if there’s demand for them. There are a few popping up on ebay right now, but your best bet would be to find one on yahoojp and have a middle man get it to you. At an average price of a little bit above $15 before fees and shipping, this is a great buy for anybody who collects sci-fi/ anime weapon replicas, and for any fan of Leiji Matsumoto, it’s really a MUST to pick up one of these. Hopefully Taito will continue this series and release more 1/1 scale guns from other Matsumoto series.

6 comments posted
AAArgh! This is AWESOME!

This is AWESOME! Seriously, a really beautiful toy. Where has TAITO been all my life, apart from producing some of the greatest, most iconic videogames ever? I'm afraid that my suitcase is going to bebrimming with Taito stuff when I come back at the end of March... (If there's any to be found, that is...)"Hey, uh...let's volt in."

This is absolutely fantastic. Taito is doing a heck of a job with their Matsumoto UFO prizes, but this has to be the best one yet. I keep passing on the Marushin gun; everytime I think of seriously getting one, I take a good look at how deformed it actually is.

The fact that it has any moving parts at all is great, I'd be happy with a static piece. Time to pick one up.

I bought this toy from Yahoo Japan via a middleman. The toy is a masterpiece. When considering the amount of anime-accurate detail and the incredibly cheap price, I prefer this to its diecast or garage kit counterparts. A must-have for Leiji Matsumoto-sensei fans.

I'm a huge Matsumoto fan and we're planning on doing a group cosplay in Greece (currently at 6 people). I've been looking for the Cosmo Dragoon everywhere to no avail. Could anyone tell me if there is any way to get my hands on 3 of them, at their normal price ( not at the crazy level the Ebay ones are being sold )? From what I can understand, there are two models avaliable, as shown here right?

If possible, I would like to have both of them and one of them twice (making that 3 of them as planned). Anyone out there who knows where I can get any of them?

I quickly went to look for it on Ebay as soon as I read this review; to my surprise, it's no longer 100 yen but the ONLY model available on Ebay is $200 WITHOUT the shipping. Unless you won the lottery or you have 200 dollars to spend, I wouldn't suggest getting the toy--or perhaps it really did come out in limited quantities. My message is don't look too hard at the pictures or else you'll be tempted into spending a lot on a beautiful toy.

This is an old thread but I've seen some people paying crazy money for these the last two months.

There is a vintage diecast version that I think is pretty darn nice, with sweet box art, that is roughly going for the same price I've seen people paying for these. It's metal, and it shoots caps. Keep that in mind before you click that four hundred dollar button on the auction...