Depending on which Matsumoto series you watch, it's pretty safe to say that the Gravity Saber was the most prominent weapon used. The basic principle of the weapon is fairly simple and straight forward, a long laser gun modeled after a classic early cutlass, giving you both a long-range blast weapon as well as a melee weapon for close quarters swashbuckling action.

The version here is the one that appeared in the 1978 Harlock tv series and the Galaxy Express 999 movies. There is another version used by Captain Harlock that appears in Arcadia of my Youth. The biggest difference is that the handguard on that one is molded in the shape of a skull face. Here's to Taito coming out with that version as well down the road. Now, on to the review...

Like the Cosmo Dragoon, we're given a great replica that's amazingly well crafted given the price. When I first heard that this was coming out, I was worried that Taito might fiddle with the size to cut the price, but fortunately, they didn't. From cocking lever to muzzle it measures a full 36 inches. That's a machinder and a half! The Gravity Saber comes in 3 pieces that need to be assembled, consisting of the handle and 2 barrel sections. The connection points are very tight and surprisingly strong. The peg that attaches the barrel to the grip extends roughly an inch and a half into the grip. I was able to swing this thing around quite a bit with nothing slipping or snapping. The overall construction is fairly well executed. 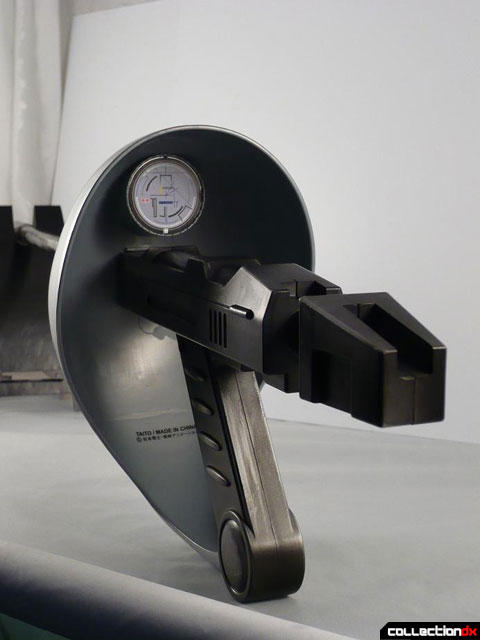 There are a few seam lines that are slightly misaligned but overall it's nothing I can't forgive. Taito did an impressive job on the paint job. The weathering is very realistic and well executed, not too much and not too little. Being a simple weapon, there isn't too much that this thing can do. The trigger is spring loaded but like the Cosmo Dragoon the cocking handle doesn't move. One cool detail it does have is a small Leiji Matsumoto circular computer display screen inside the hand guard. Overall the execution and details on this are superb. While there are a few small QC issues with this versus the Cosmo Dragoon, they're nothing that would make me not recommend this to anybody who's into Leiji Matsumoto or fantasy weapons in general. With the Cosmo Dragoon being based on a real pistol, different import laws made it very hard to get one from most major online shops. The Gravity saber is much easier to get. The one that was reviewed here was purchased through Hobby Link Japan and while it is currently listed as back ordered there is another release scheduled later in the year with the added detail of a skull and crossbones marking on the hand guard. Quality 1:1 scale items are always great, this is a cool item! George Lucas figured out that 1:1 scale items could be great money makers and it's surprising that more manufactures haven't picked up on it.

I mean, who's going to care about a 1:1 scale of, e.g., the police handgun from "Dominion Tank Police"?

Also, you have terrible trouble importing anything 1:1 that looks even vaguely like a gun. I'm amazed that they let them get away with this Gravity Saber, actually.