You knew it would happen. Once Kaiyodo released a Revoltech Valkyrie, there would be another and another. It has begun… At least they are cool toys! 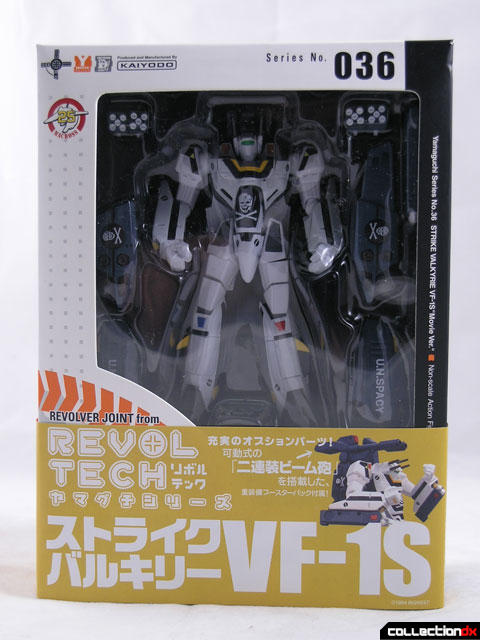 I am ashamed to admit that I didn’t own any incarnation of the Strike Valkyrie until now. From HobbyLink Japan comes the 36th release from the regular Revoltech line, the VF-1S Strike Valkyrie. 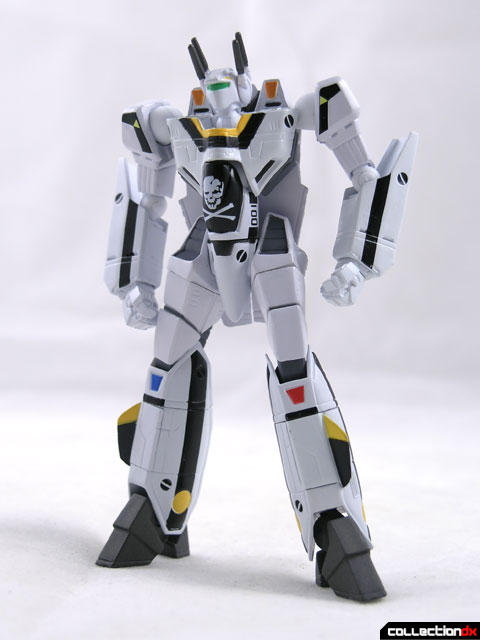 The Strike Valkyrie is a variable fighter, capable of changing into three modes – Fighter, Gerwalk and Battroid. The Revoltech toy is in Battroid mode, and CANNOT transform.

This Valkyrie comes from the landmark movie “Macross: Do You Remember love?”, a movie set inside the fictional Macross universe. It’s piloted by ace pilot Roy Focker.

The toy features 37 points of articulation including 11 Revoltech joints. The toy uses a lot of swivel joints but they don’t detract from the coolness of the toy. 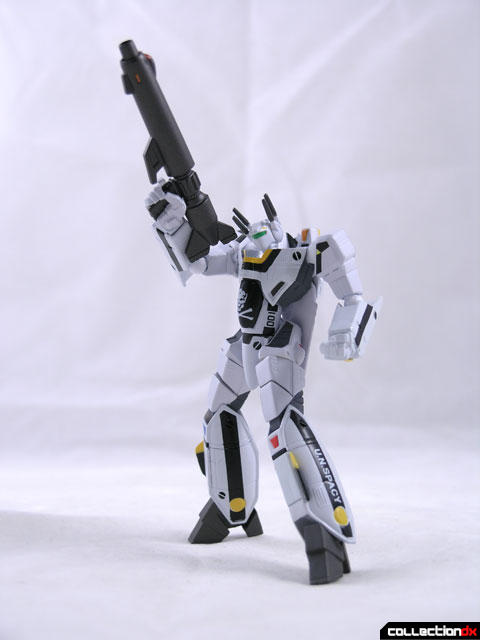 The main draw of the Strike Valk is of course the Strike Armor. The armor can be attached to the legs, arm and back. The cannon booster on the back has a Revoltech joint inside of it to allow you to position it over the shoulder. In addition, there are four wing missile pods that can be attached. 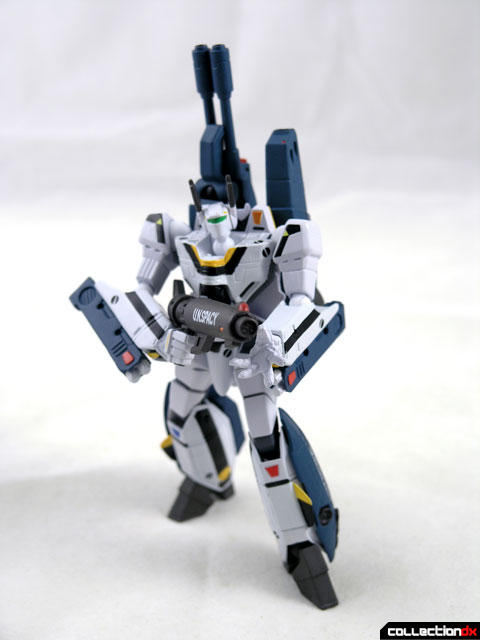 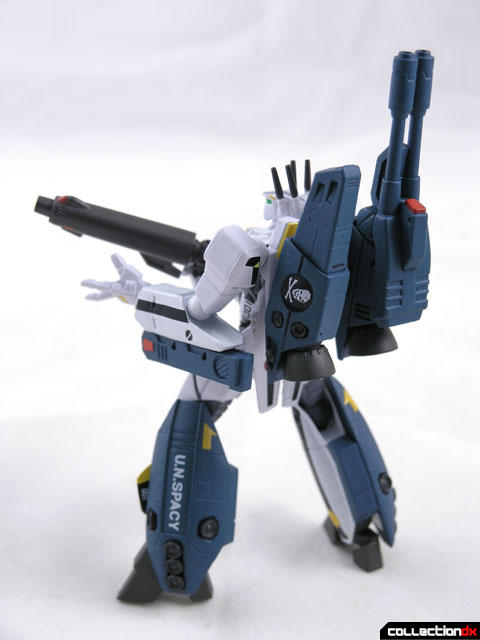 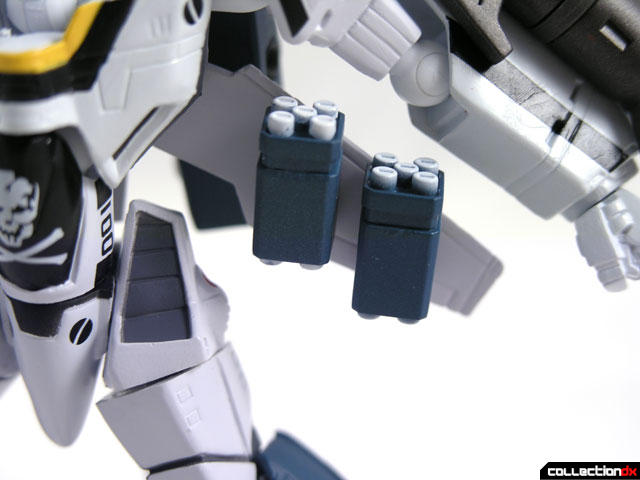 The Revoltech VF-1S also comes with your standard Revoltech Stand, enabling it to pull off some terrific poses. 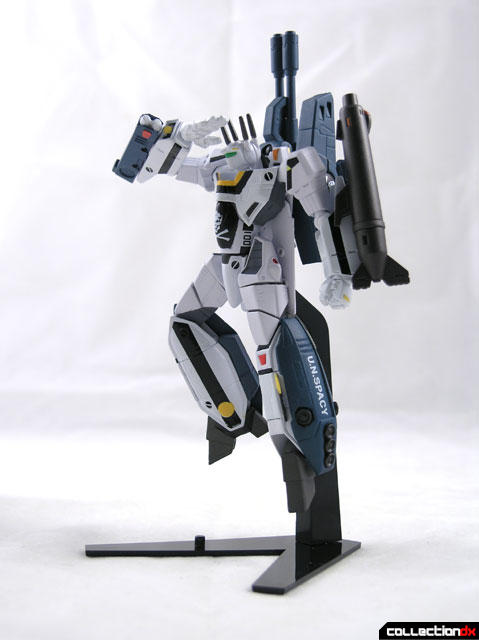 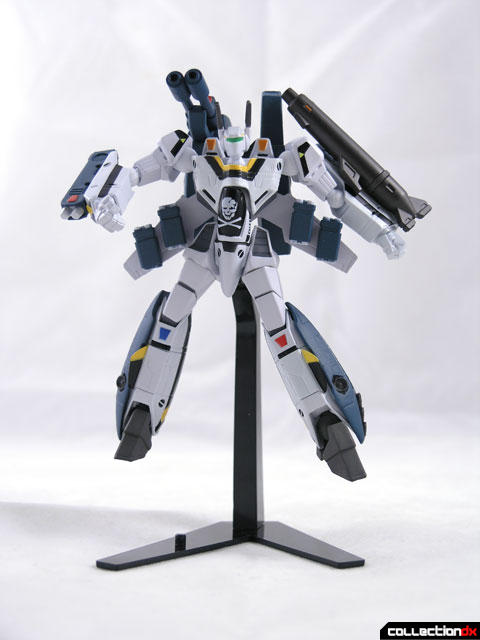 The sculpt is excellent as always, but I found some of the paint work to be sloppy. I guess you can’t expect perfection on a $20 mass produced toy. 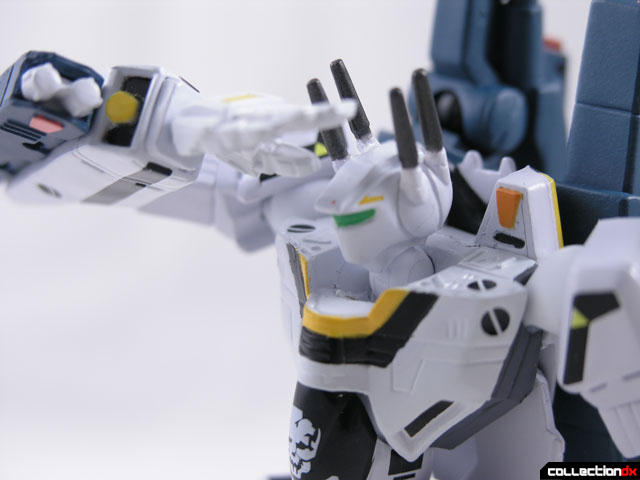 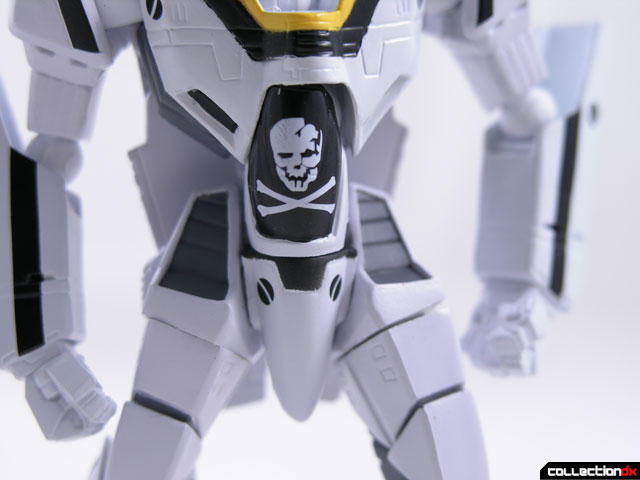 Kaiyodo made a good choice with releasing the VF-1S rather than re-cycle the previous design over and over, but I have to wonder how far they are going to go with this.

I want, I want, I want! (Though I may wait for the inevitable Hikaru-red ver.) Those wings are proportionately tiny-!

How far will they go? Well, if we're talking "Macross: DYRL"-only, then there should be at least three more repaints of the VF-1S variant:

These three all get them right after the SDF-1 returns to Earth, though only Hikaru uses his in the final battle. (Hayao dies in the first shots of the battle on Earth, and Max becomes a Meltrandi male after this same battle.) Before this, they use VF-1As in white, black stripes, and their respective colors.

Having not seen how the Robotech ver. of the series ended (I read the McKinley novels first, unfortunately), I think that only Roy and Hikaru pilot VF-1Ss through the entire series since that model (obviously, know as the 'Roy Fokker special') was passed on to the latter after the former died. Though whether any others piloted a VF-1S, I don't know for certain; they all got either commander-type VF-1Js or mass-prod. VF-1As. Hikaru, however, kept the yellow coloring in the series, opting not to change it.
------------------------------
CollectionDX Staff

All of the armor attaches with pegs. I kind of rushed this one out the door, but I am having a hard time coming up with new and interesting things to say about revoltech toys. They all are consistently great.

This looks really cool, but I want the Hikaru Strike Valkyrie. Has there been any kind of confirmation that's actually coming out?

I would be surprised if they didn't release the Hikaru-repaint ver. of the VF-1S Strike. But if they do, I'm definitely getting it! That was just bad-ass in the movie, but in the series Roy died before they introduced the Super armor, which was introduced after the SDF-1 left Earth in its long-term decoy mission.
(Didn't Hikaru pilot the prototype models of both the Armored and Super Valkyries...?)
------------------------------
CollectionDX Staff

I think a transforming Valkyrie, at least, would be too big and complicated for the Revoltech lin. I have Roy's VF-1S, and it has replaced my Toynami Valk as my favorite Robotech/Macross toy.

Honestly, what I'm waiting to see is a head-to-head comparison between the 1/100 scale Toynami Valks (well, when the super/strike armor sets finally come out) and these Revoltechs. Obviously, that's kinda apples and oranges seeing as how the Toynami's are designed to transform and the Revoltechs are optimized for looks and poseability in Battroid mode...but both are in the same "class" of toy (i.e., they're cheap thrills for around 20USD).

Okay, that's the Hikaru 1A, but I want the 1S! Come on Japan, make it happen!