The Silver Saint whose power and music are legendary: he was said to be stronger than a Gold Saint and his masterful playing of the lyre knew no rival. Orphée disappeared from Sanctuary, presumed to be dead; only to be discovered by Shun and Seiya while they traversed the underworld (ironically Orphée was still living). He had gone to the realm of dead to persuade Hades to allow his beloved Eurydice’s soul to return to the land of the living. Hades agreed under the condition: that while they both traveled up to the surface, Orphée could look back to check on Eurydice until they reached the surface. When Orphée sees a bright object in the sky that he perceives to be sun, he joyously looks back at Eurydice, only to see that Eurydice has been almost completely turned to stone. Since the object in the sky was not the sun, and Orphée had prematurely looked back, Eurydice must forever remain a fixture in that spot of the Underworld. Orphée remains with Eurydice in the Underworld and switches his allegiance to Hades, who grants him the rare privilege of regular audiences with the lord of the Underworld so that he may hear Orphée's enchanting music. 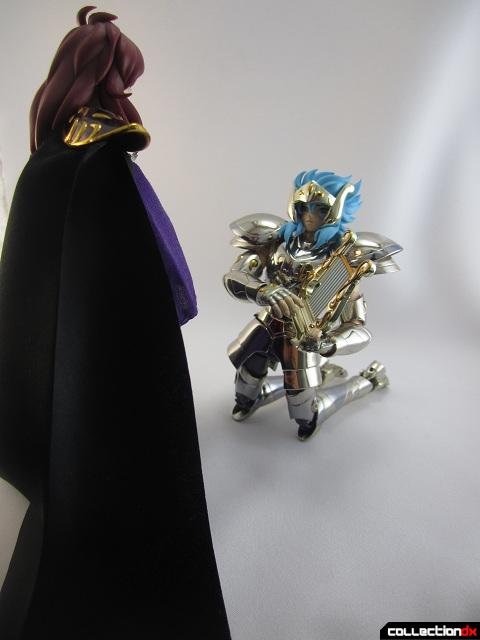 The story for Orphée parallels the story of Orpheus in Greek Mythology. Orphée is also the product of Masami Kurumada’s character Lyra Orpheus, who appears in the non-canonical first Saint Seiya Movie titled “Evil Goddess Eris”. In fact the armor for Orphée is practically identical to Lyra Orpheus’ armor. Toei also used Lyra Orpheus as a base for the character Benetnasch Eta Mime who is part Asgard Saga; a filler story arc in the animated series .Since both Mime and Orpheus are non-cannon Lyra Orphée is the official lyre/harp-playing Saint of the series. 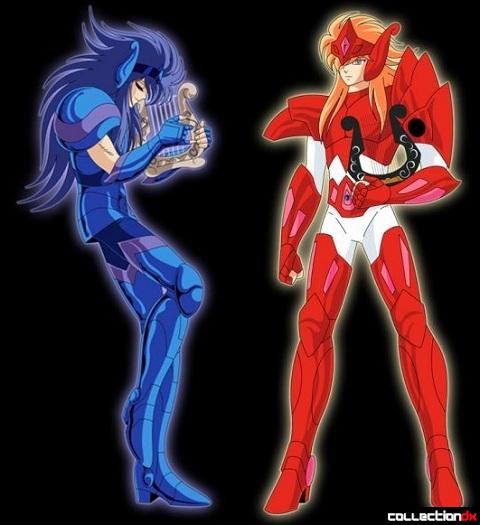 As usual Orphée is packaged in signature book-style box of the Saint Cloth Myth line. 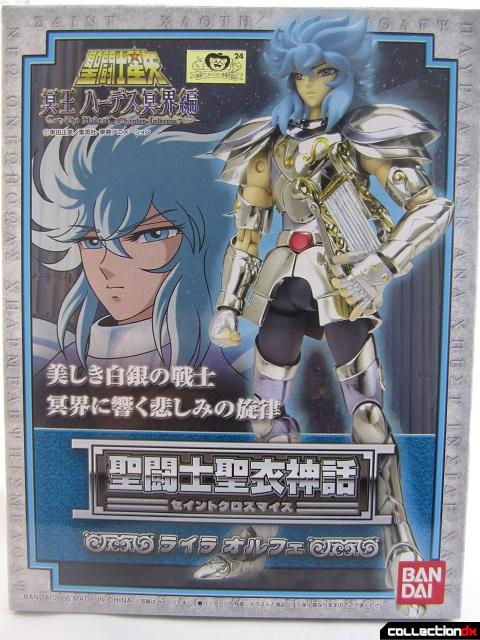 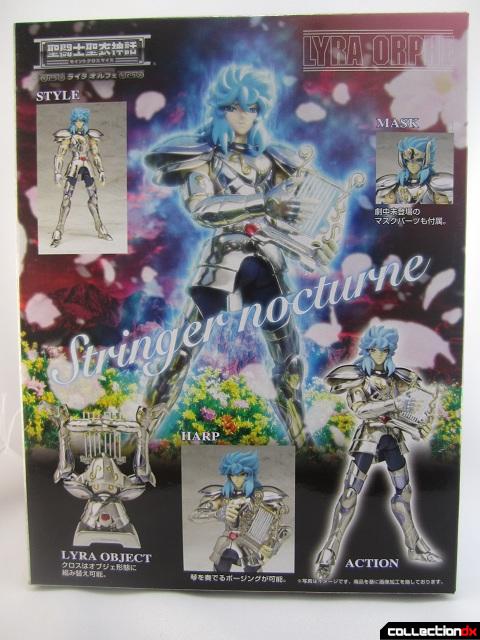 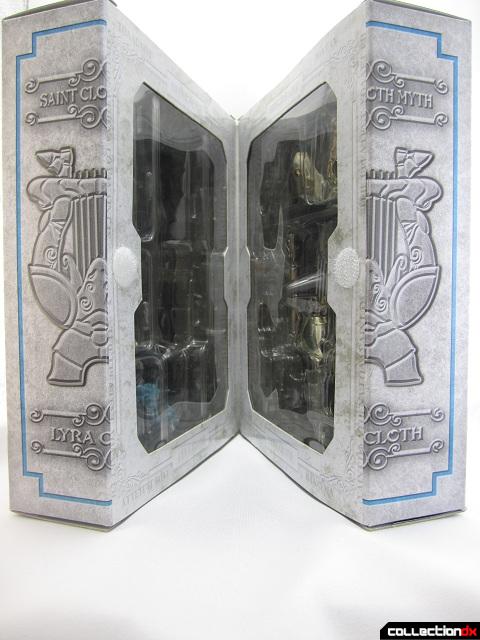 The Object mode for Lyra Orphée is big lyre (go figure!). It is unique in the sense that we rarely get inanimate objects as Objects. Most of the armors are based on animals, mythical creatures or human characters. 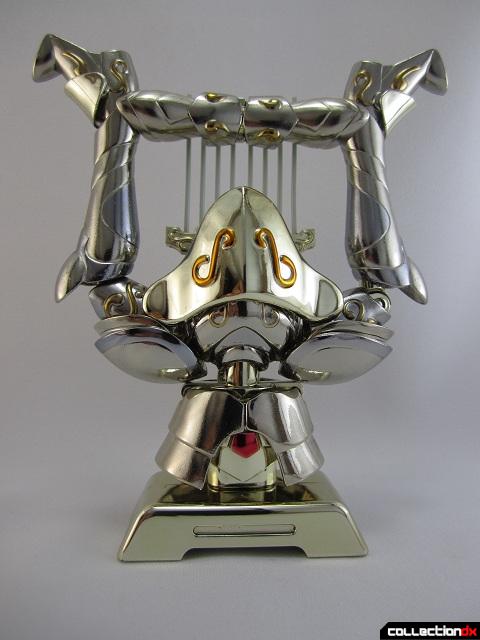 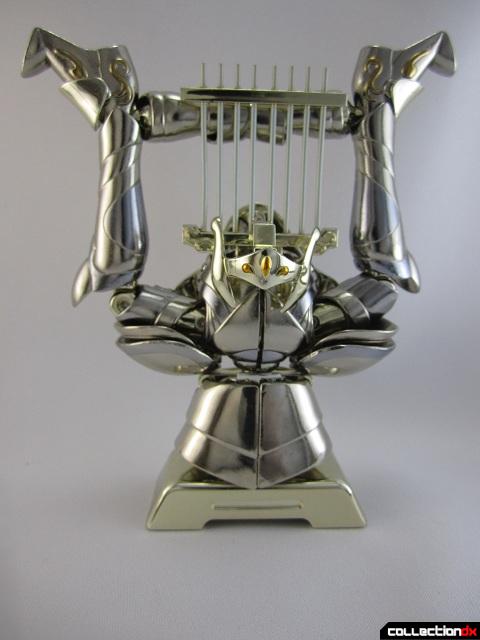 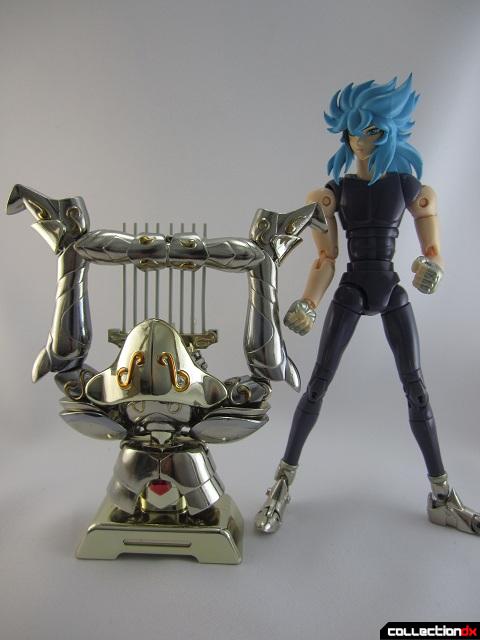 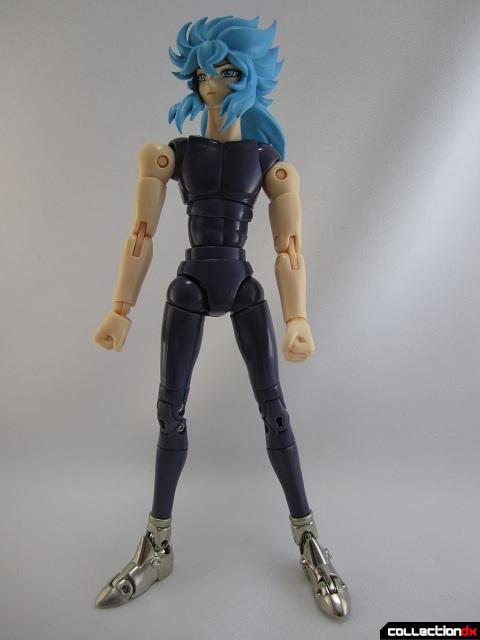 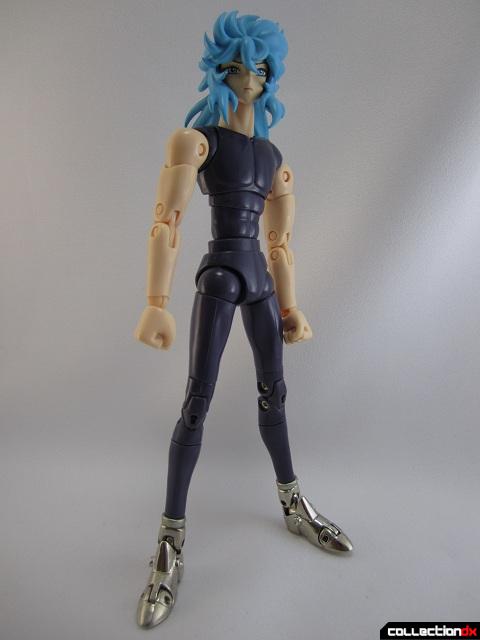 The figure is fairly flexible since it sports a Generation 2 body. 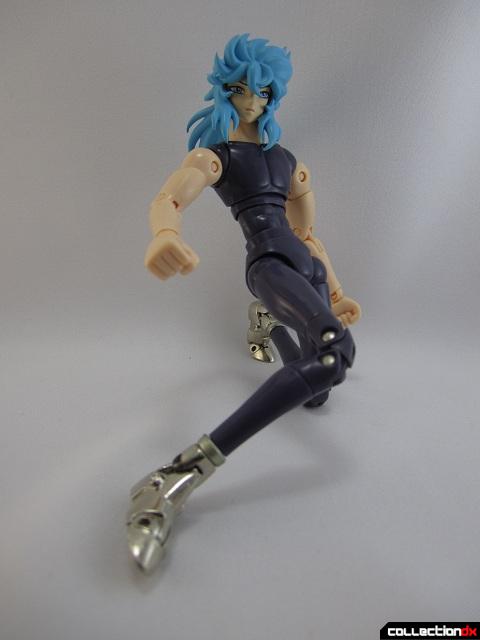 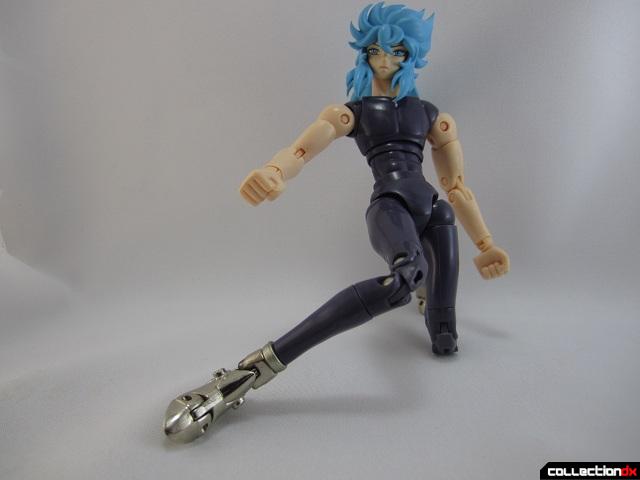 Orphée's armor looks elegant with its shiny silver paint app,and a few touches of gold. My figure, however, had a few paint bubbles on the chest armor. This is only of my Saint Cloth Myth figures to have such an issue, so I am going to chalk this one up to the figure being a lemon. It is also not very noticeable until you get up close to the figure. 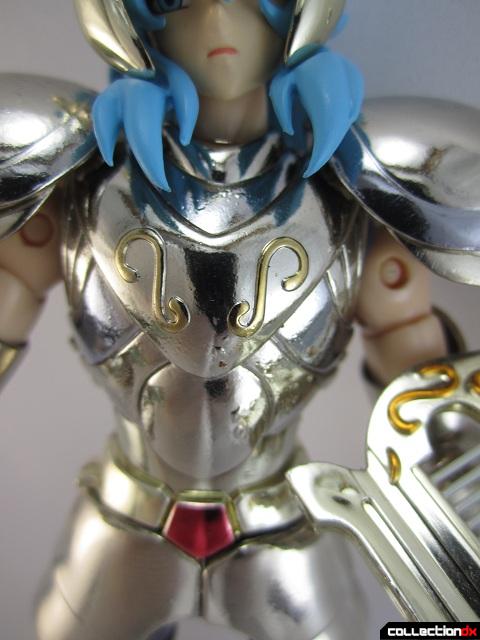 As you can see his armor provides quite a bit of protection, just as much as the armors of the Gold Saints; I think this is a nod from Kurmada as to Orphée’s power level. 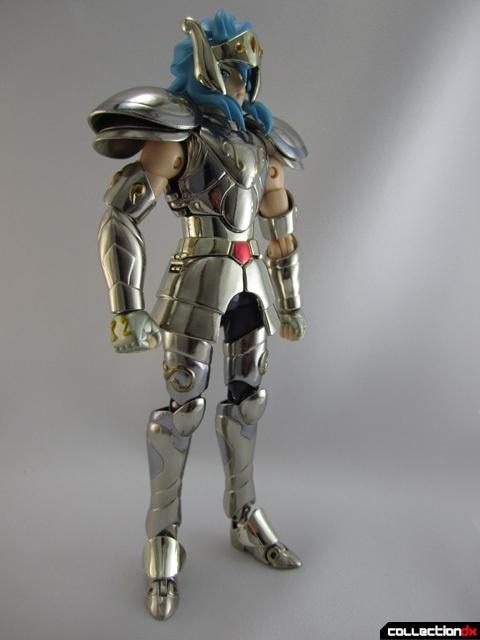 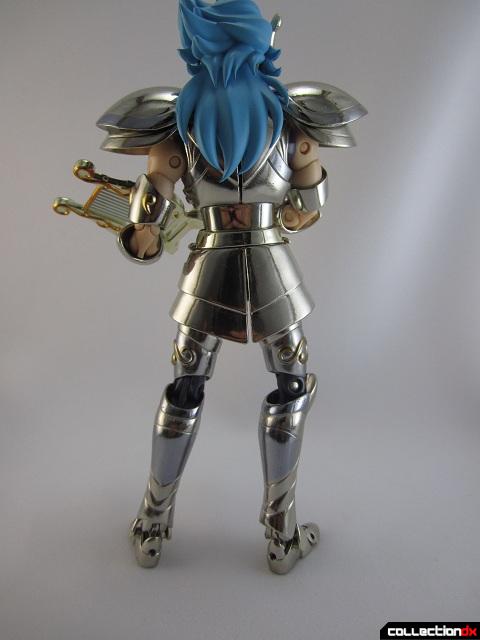 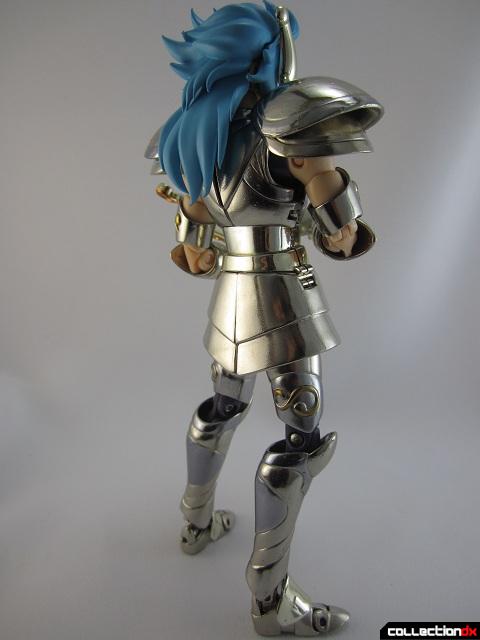 Orphée’s sideskirts and shoulder pads restrict his movements a bit , since they are solid pieces of armor attached only by a hinge joint. 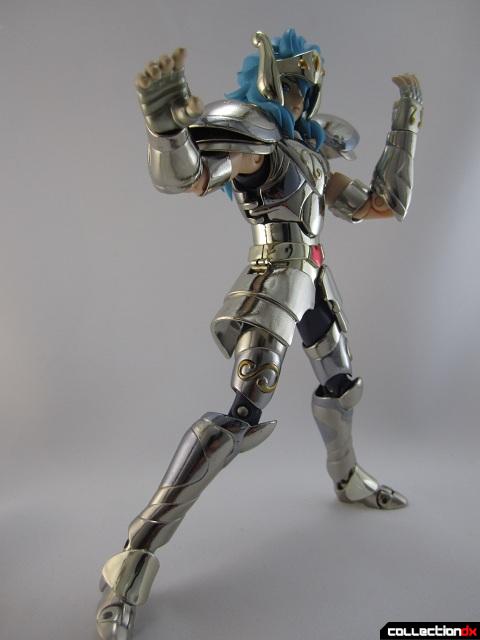 The armor is comprised mostly of diecast; with only the headpiece, the torso armor and the clips that go over the feet being made of plastic. 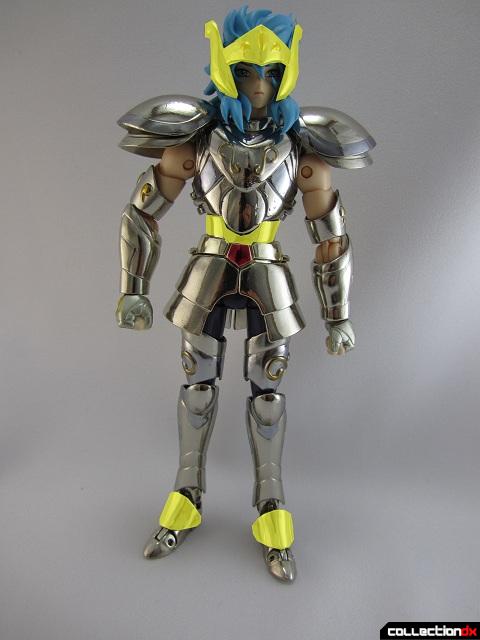 Orphée comes with his signature lyre, which is his only means of attack and defense. Orphée’s music is so powerful that he was able to incapacitate Hades, Pandora and two Judges of the Underworld at the same time. 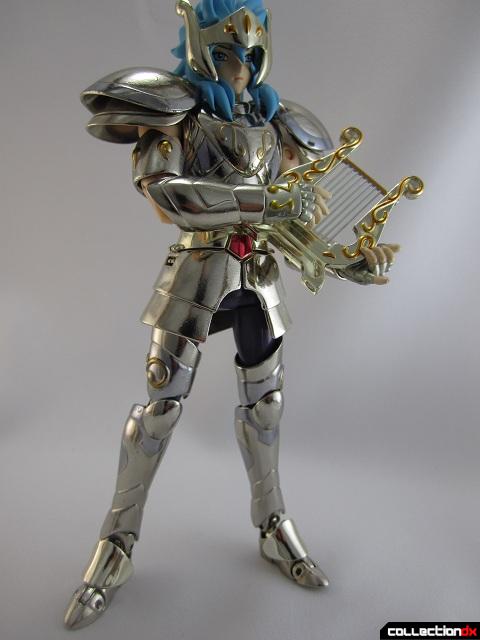 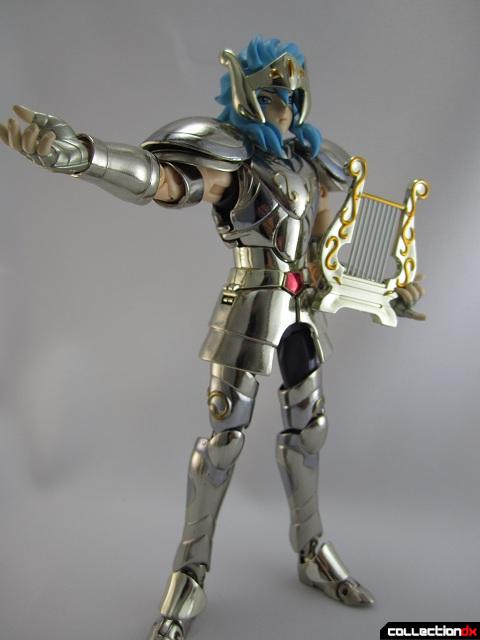 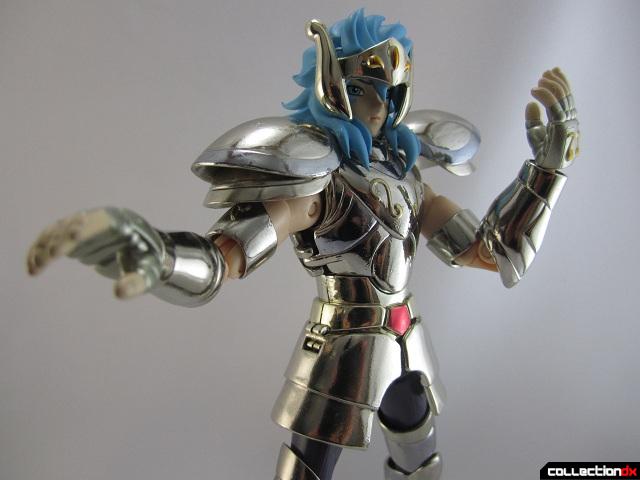 The face sculpt is really well done. Usually I am not a big fan of neutral facial expression, but in Orphée’s case it seems to suit him well since he displays a solemn face through most of his appearance on the show. 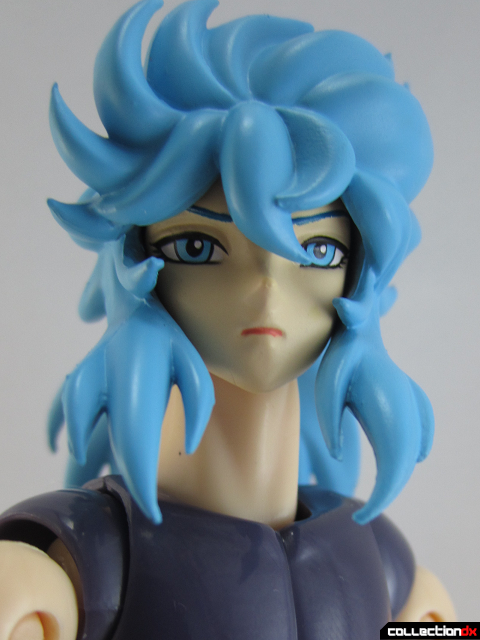 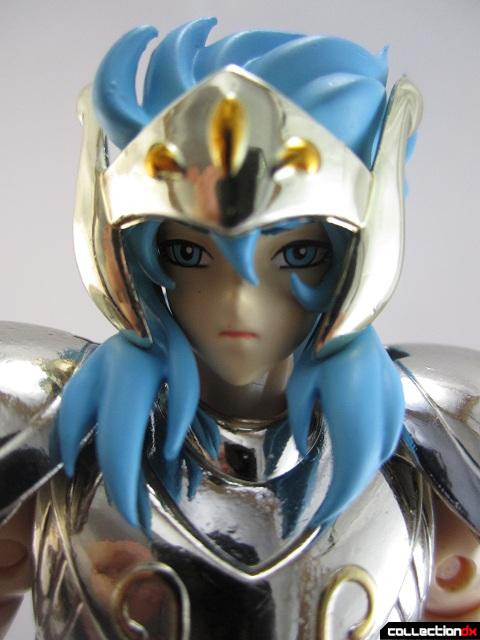 Bandai included 5 sets of hands, which is quite an impressive count considering that Bandai usually skimps on the extras when it comes minor characters. 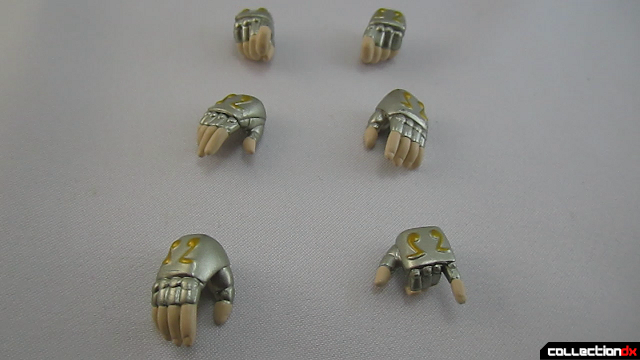 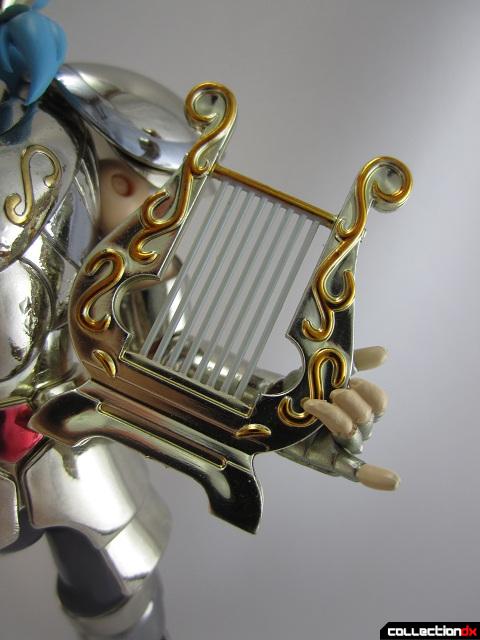 Notice that Orphée’s pinky is sticking out when he is holding the lyre, which shows that he is quite fancy. Remember: when in doubt, pinky out.

The one nuisance of this figure is the headpiece. The peg for the headpiece does not fit well into the hole in the hair, which keeps the headpiece from laying flush against the hair. This results in the headpiece being a bit float-y over the hair and sometimes popping out. 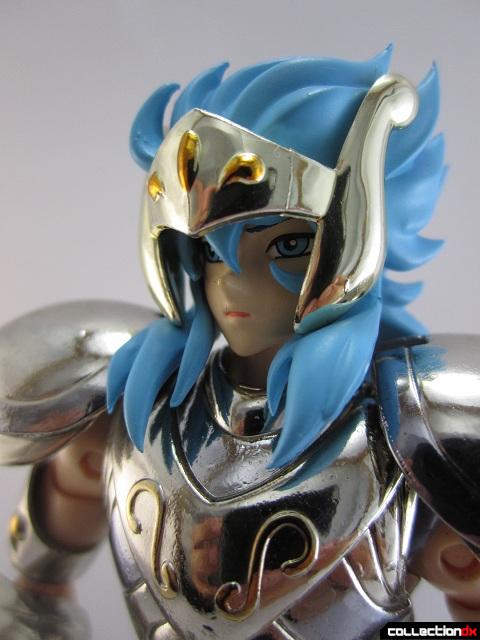 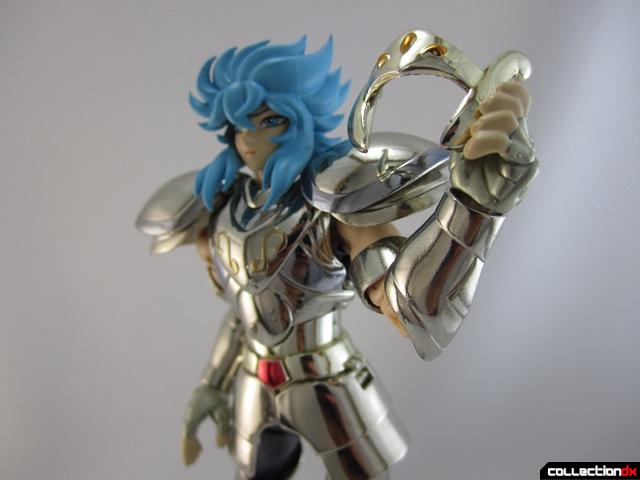 I really liked this figure because it was solid release in the line. I have to admit I am a little biased because I like the character. His fight with Pharaoh Sphinx was freakin’ great! Although the “G” string (which as everybody knows is the offensive string) on his lyre is cut, he does not throw in the towel! Instead, he holds the string in his teeth, so that he may deliver the finishing blow to his opponent. 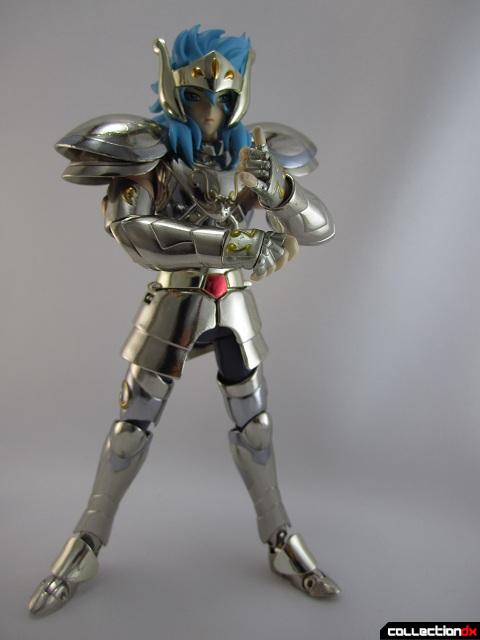 As a bonus I have added a video review:

For those who want to know more about the check out the character overview/ mini review:

I think Saint Seiya itself has some legendary music. Pegasus Fantasy is amazing.

Agreed. The composer, Shingo Araki, did an amazing job on the music. He actually passed away about a month ago. I think the only other composer that I like better than him is Yoko Kanno