A funny thing happened to comics in America in the late 80s - Manga. In 1987 I was 14 years old, and I was all about comics, and just finding my independence due to my skateboard. I would take a weekly trip down to a comic store on Lakeview Ave in Lowell called Louise's books.

The old lady who ran the store, Louise, didn't know much about comics, I think her son did all of the ordering. I got all of my comics there. X-Men, New Mutants, and then I caught the caught the cover of this new book Xenon. Apparently it was Japanese. Something called Manga. It was the first wave of American Manga. Dagger of Kamui. Mai the Psychic Girl. Area 88. Xenon. I was hooked. 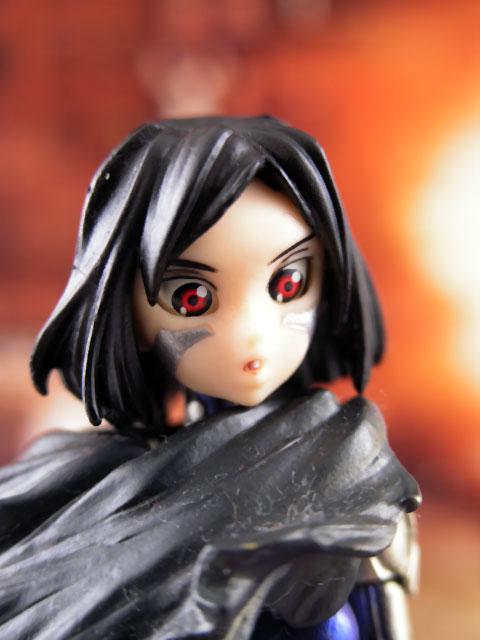 Alita was the story of a robot girl found in a junkyard with no memory. She is reactivated by a scientist who names her Alita, and through her adventures she becomes a bounty hunter and later a Motorball player, all in a quest to find out about the secret of the mythical city of Tiphares.

Of course, the name Alita was an American construct. In Japan, she was better known as Gally from a manga called Gunnm (a mashup of Gun and Dream).

I loved Alita, but was bummed that we never got any Alita toys. Sure there may have been a few limited kits or something, but never a full-fledged toy. Not until 2007. 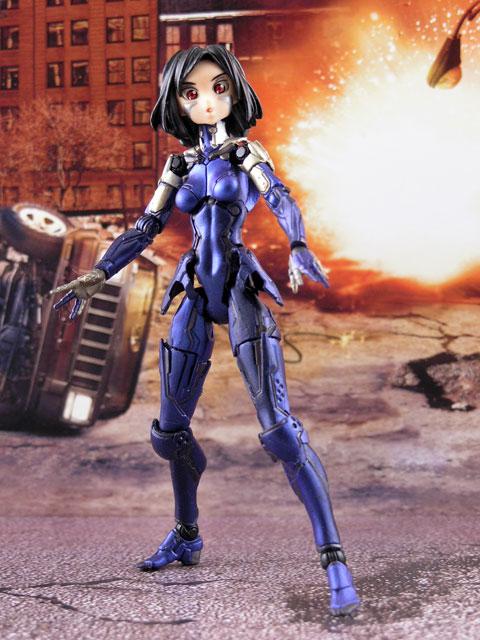 The Gunnm manga ended in 95, with a few sequels running on and off. Gunnm: Another Stories was serialized in Ultra Jump from 97 to 2007, finally being collected in the set we are looking at today. 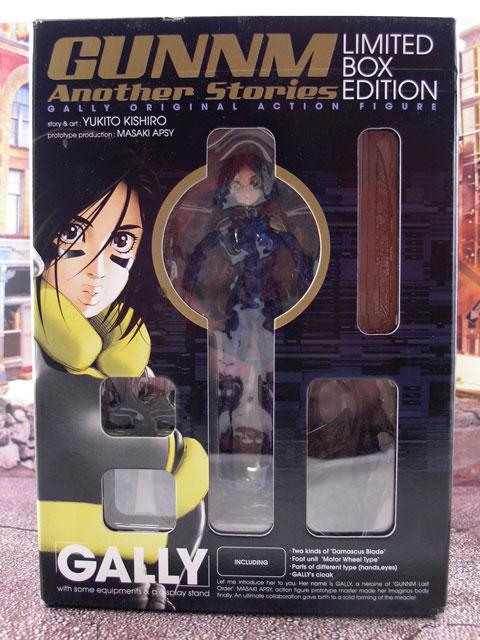 This special edition set includes one Gally figure, and a copy of the collected Gunnm: Another Stories. 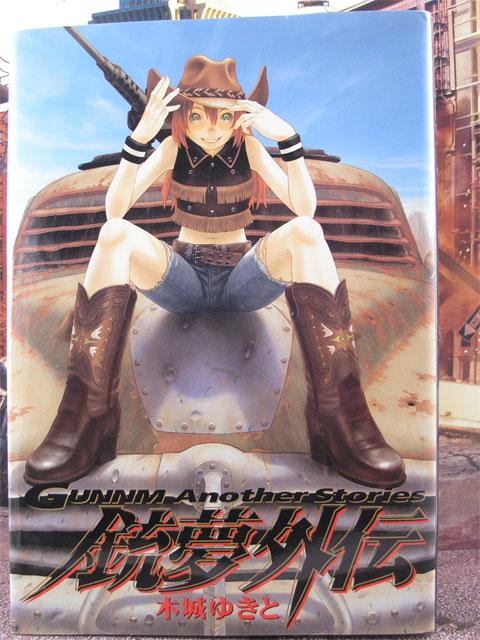 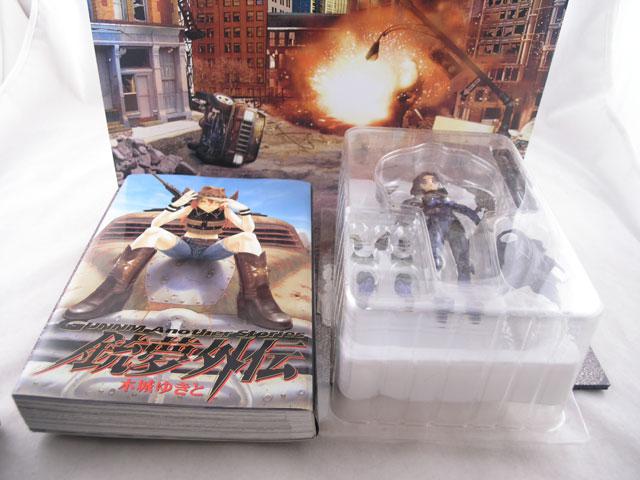 The manga is nice, but all in Japanese and an official English translation has never been released. But let's be honest, we didn't buy this for the manga. 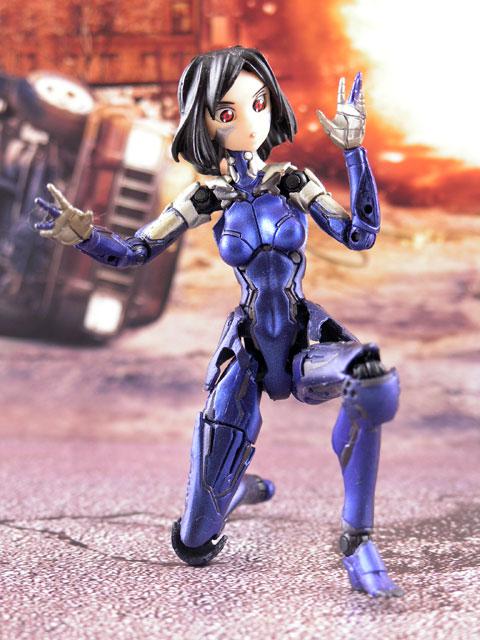 The figure is designed by Maki Asai, who would later be a key sculptor in the Figma series. So in a way, Gally is a pre-figma. 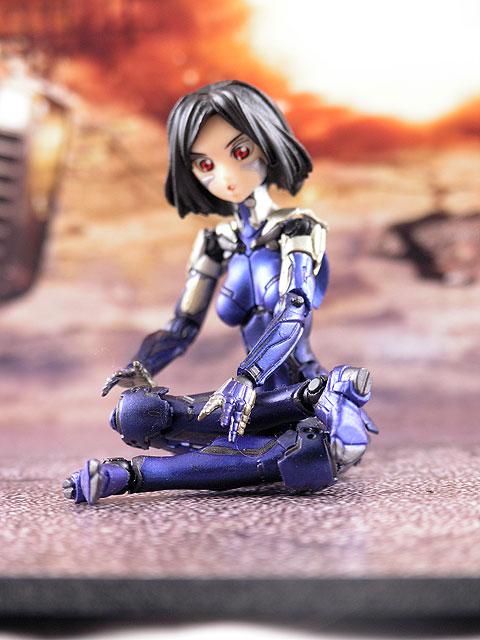 The figure is made out of hard PVC and ABS, with multiple points of articulation. The joints are a generic universal joint, not as precise as figma, not as clicky as revoltech. The joints fit a bit too tightly for their own good, and can disassemble when trying to swap a part.

Which is not a good thing, as there are many parts to this figure.

Starting with the head, this figure features a rather neat gimmick. The face comes off and the toy features swappable eye parts. What is really interesting though is that the eyes are blank, and come with a decal sheet of eyes. Thats right, you can choose which eyes and which expression you want. The decals are water transfer though, so it's quite a project to attach them. 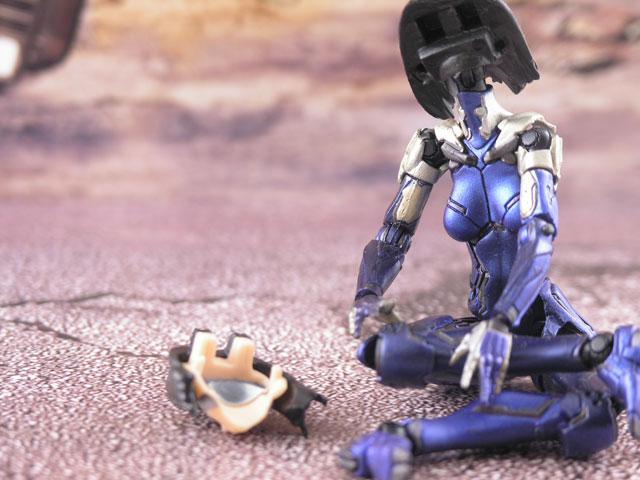 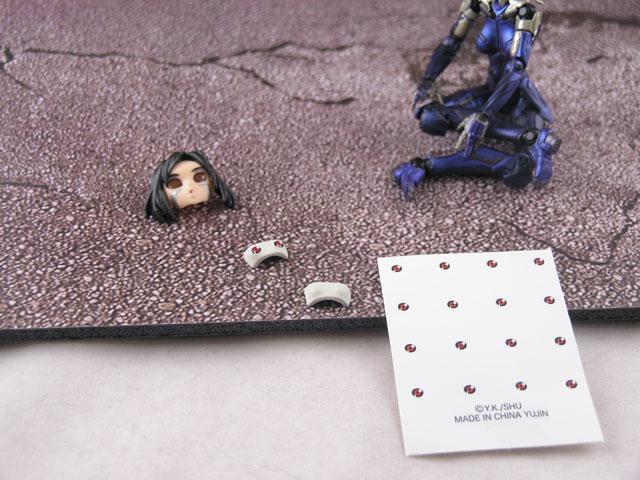 While the head is off, you can attach an an optional cloak. 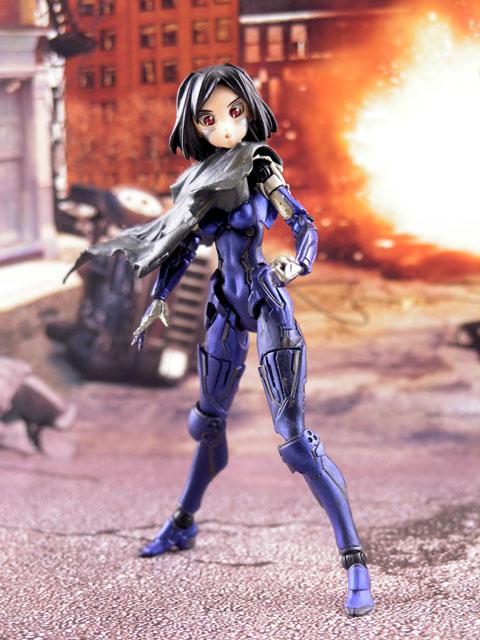 The arms are fully poseable (shoulder, bicep, elbow, wrist) and feature detachable arm blades that can be stored in two positions. The detail on the arm blades is astounding. Hands just pop on and off with a ball and socket connector. 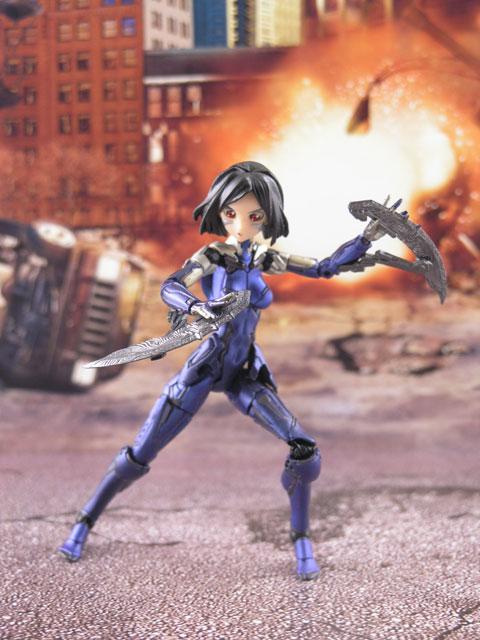 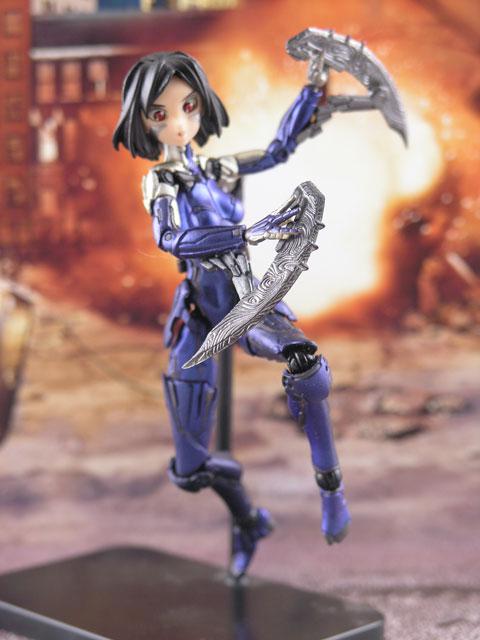 There is one chest joint below the breasts, and then you have ball joints at the hips with flexible hip covers. The knees are jointed as well as the ankles. 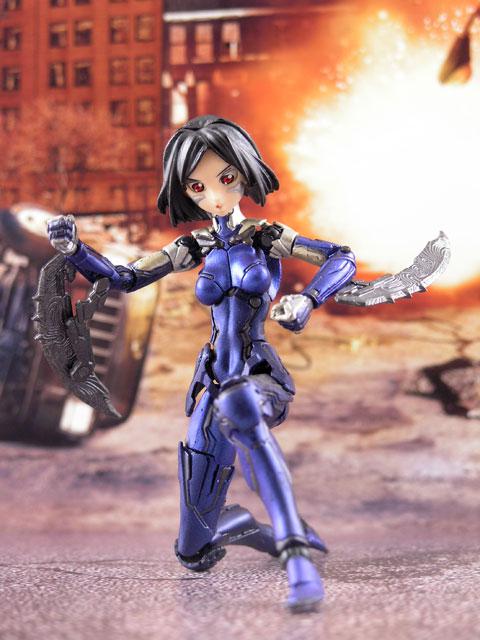 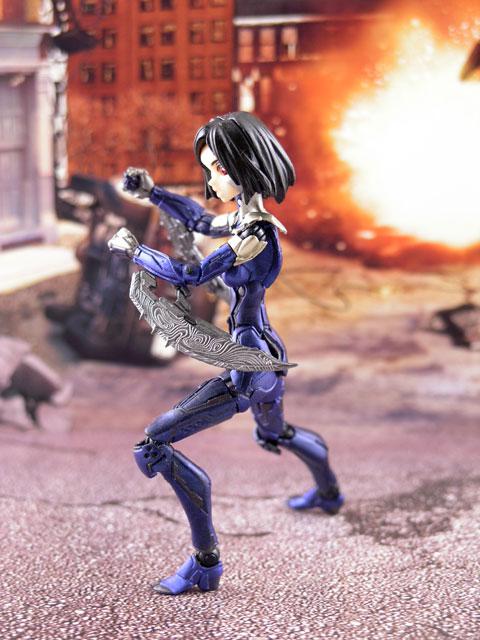 The feet can be swapped out with Motorball feet, but the wheels on the feet do not turn. 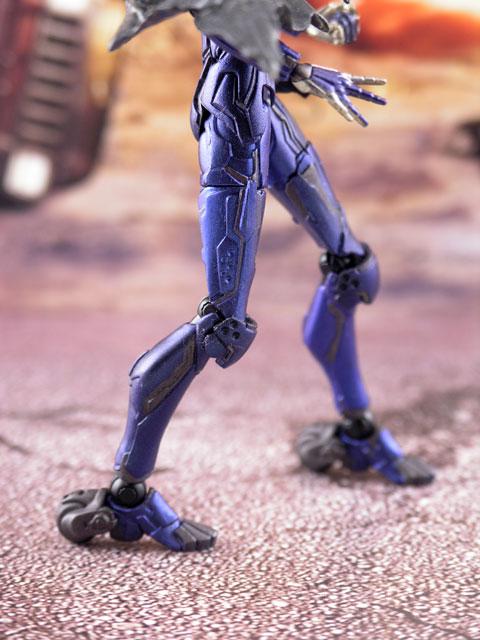 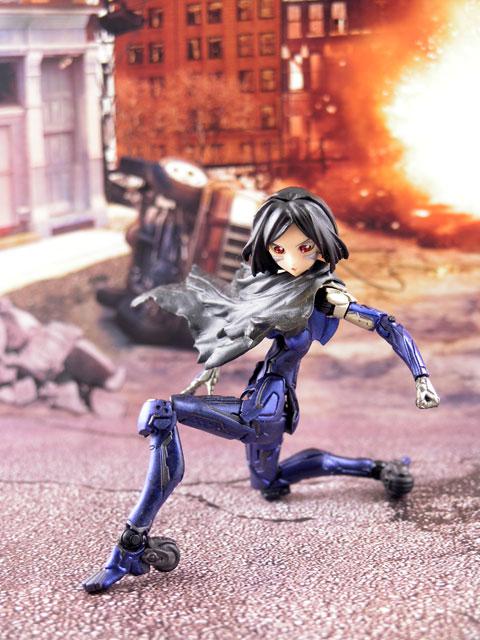 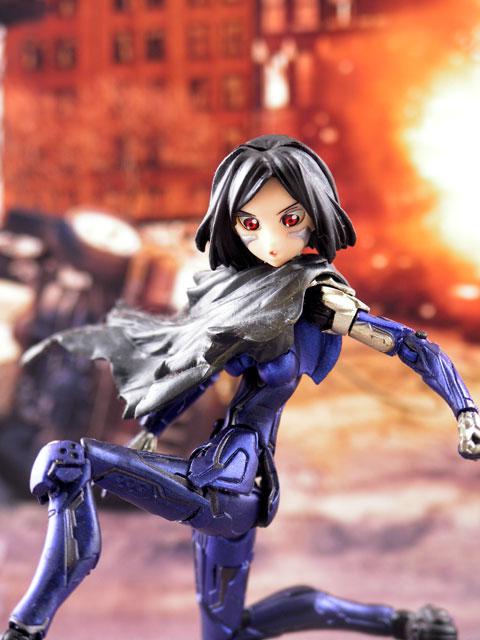 In addition a large bladed weapon is included that opens like a butterfly knife. 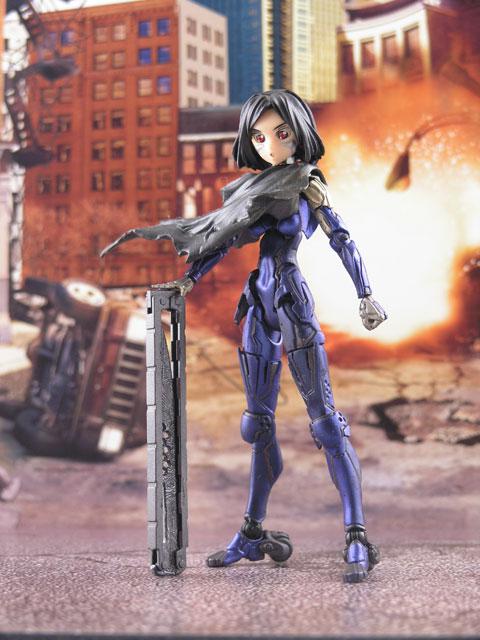 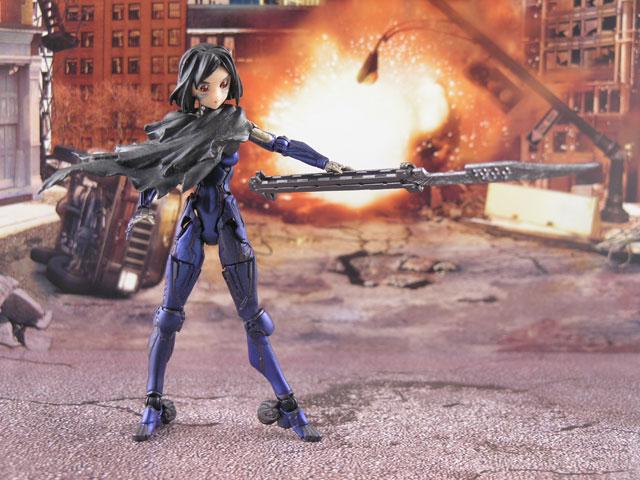 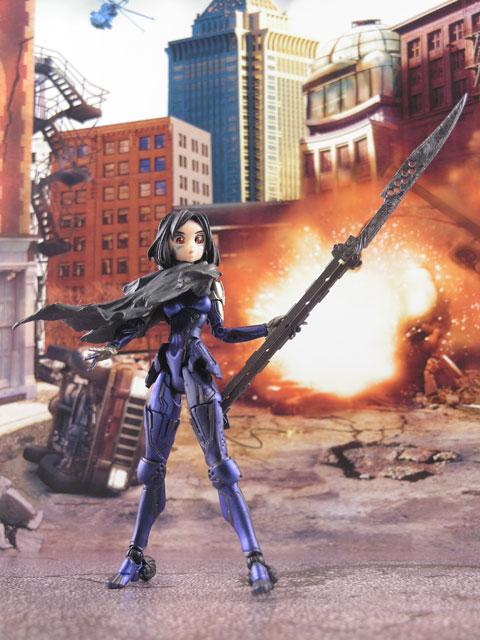 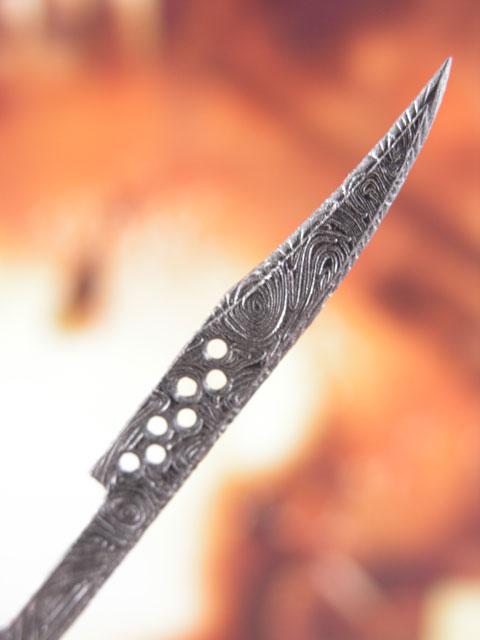 Also included is a rather boring stand that clips around the waist. There is a hole in the back of the figure that looks like a figma stand could plug into, but I haven't checked it yet. 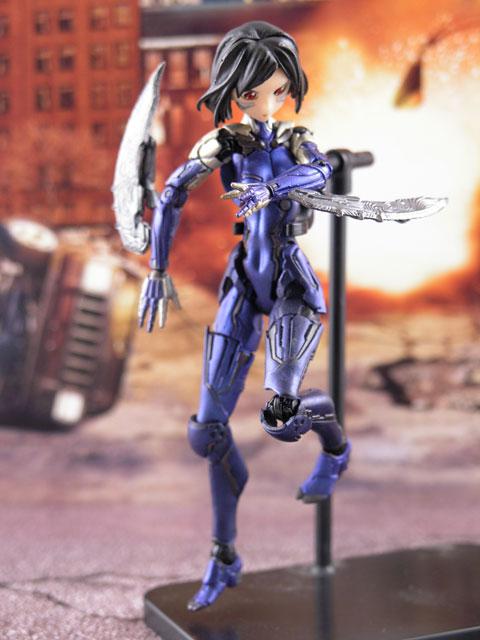 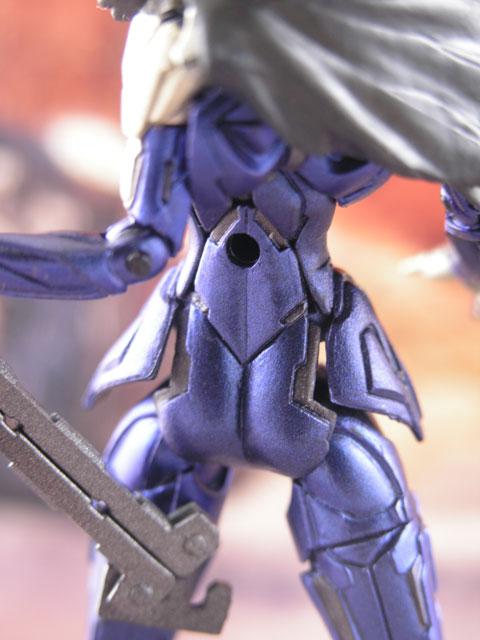 Gally looks awesome but feels fragile. This is definitely not a toy, and should be treated as a display model. Joints and weapons pop off easily. Still, it looks fantastic. 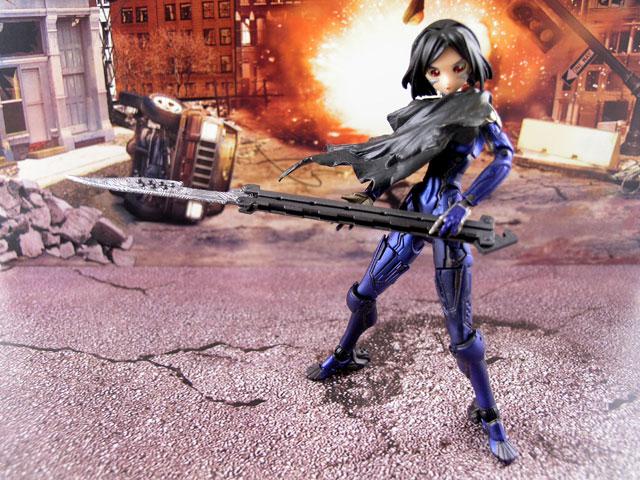 The look though, is unfamiliar to me. I know Gally / Alita's appearance changed often through the book, but I don't remember this particular look. It could be an original for this figure, or from some story I have not read. Either way, it looks great. 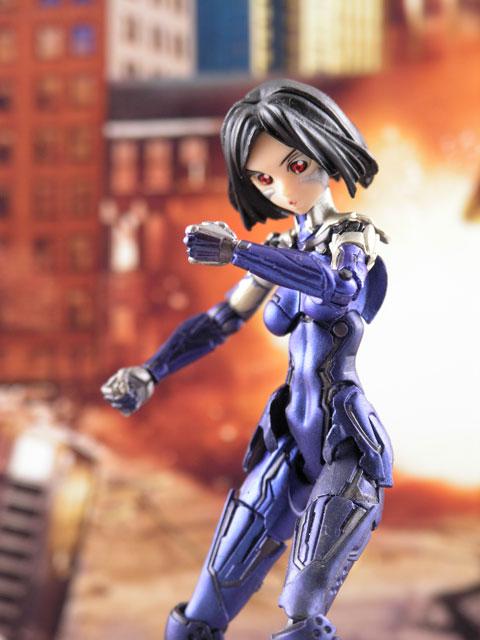 Tracking one down is not hard, but prepare to pay a premium for one. In the us these will run you about $150 or so, but you can still get them in Japan for retail. Why not try using a YJ middleman and find one for yourself?

Special thanks to Action Figure Displays for the background for this photo shoot. You can check out all of their fine products at http://www.actionfiguredisplays.com/