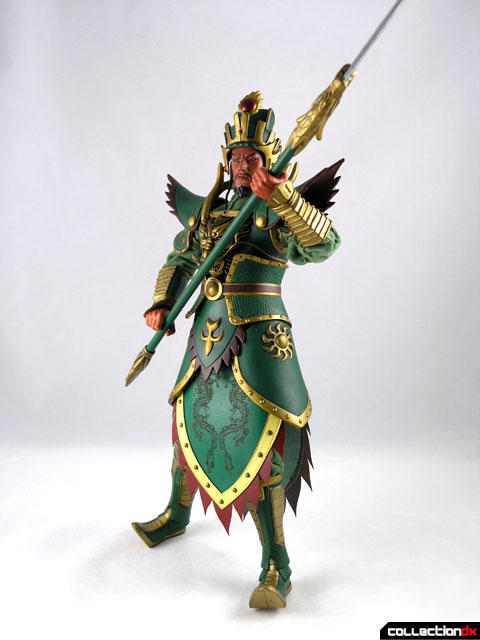 “Guan Yu was the sworn brother of Liu Bei and Zhang Fei. Five years before the Yellow Turban Rebellion, he slew a wealthy bully and was a fugitive up until he met Liu Bei. Sometime after the Yellow Turbans, Guan Yu and Liu Bei's wives were captured by Cao Cao, and Guan Yu surrendered to Cao Cao, even fighting with him against Yuan Shao. After repaying Cao Cao for sparing his life, Guan Yu traveled a very long distance with Liu Bei's wives to bring them home safely. Later, Guan Yu spared Cao Cao's life at Chi Bi, but was killed with his son Guan Ping when captured at Maicheng.”

Apparently Guan Yu was a real person once; You can read more about him in this Wikipedia entry.

Guan Yu is manufactured by Sea-International (known for their ZMDC figures), Distributed by Merit Intl., and is in stock at UniToyzone. There are only 1,000 pieces made of this figure in the world. 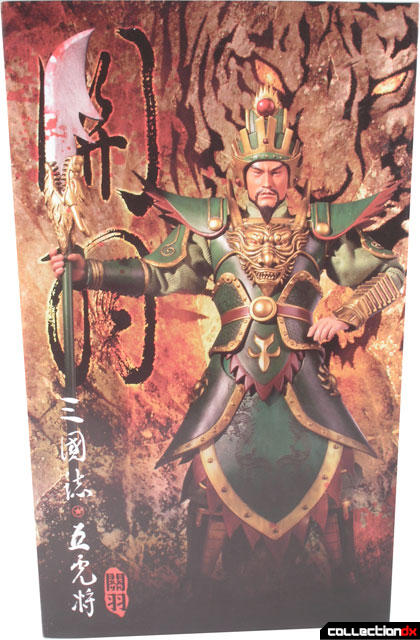 The figure comes in an enormous box with a cover secured by Velcro. On the inside cover, there is a description of the character; while opposite this a large transparent window shows off the beautiful figure. 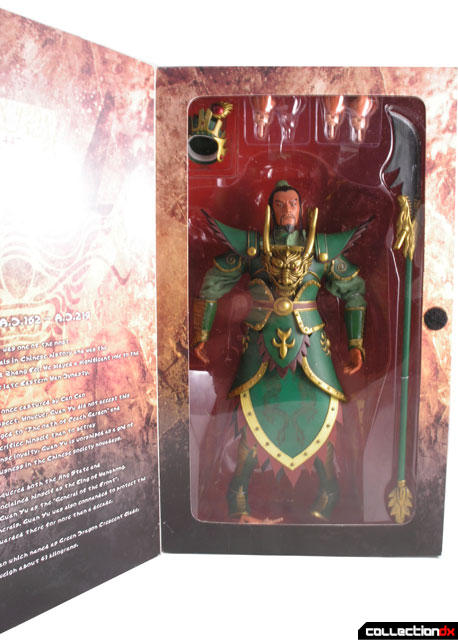 Guan Yu is simply one of the most beautiful 1/6 scale figures I have ever handled. The detail on this thing is simply astounding.

The clothing is a mix of plastic, vinyl, cloth and rubber. The main body armor is comprised of several different pieces. The upper body is a hard rubber armor, and underneath is the vinyl skirt area. The skirt is embossed with dragons and even has metal rivets! Underneath all of the armor is a corduroy body suit that covers everything including the arms and legs. The arm gauntlets and boots are rubber as well. 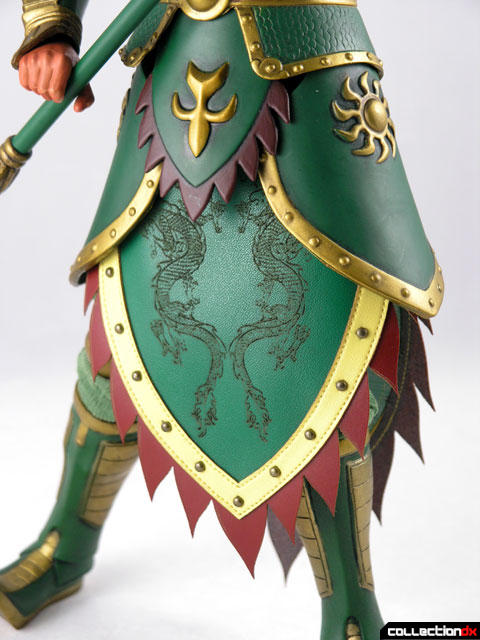 The body underneath is fully poseable, but some articulation is limited due to the nature of the body armor. The armor doesn’t allow for as much flexibility as I would have liked in the abdomen, but this figure is so beautiful it doesn’t really matter. This figure can be difficult to stand up so I recommend you get a 1/6 scale doll stand (there isn’t one included). Guan Yu comes with 2 additional sets of hands that can be swapped out easily. One set of hands is designed to hold the included spear. The hands are made out of a hard rubber, and require some finesse to get them to hold the spear. I found it easier to attach the hands to the spear and then attach the hands to the arm. 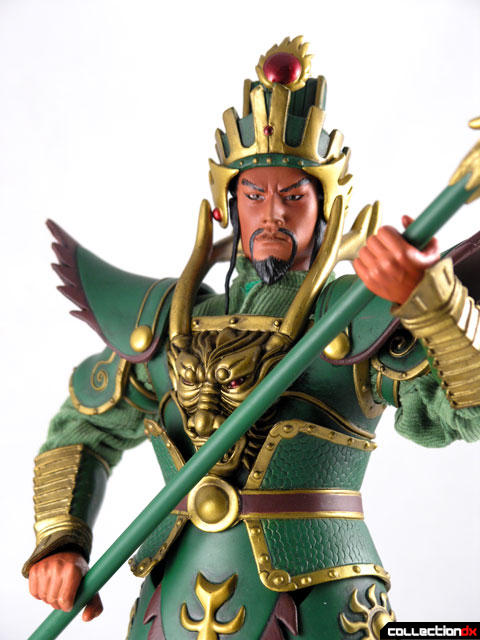 The spear is a long, highly detailed weapon made of rigid plastic. Guan Yu can hold it with one or both hands. 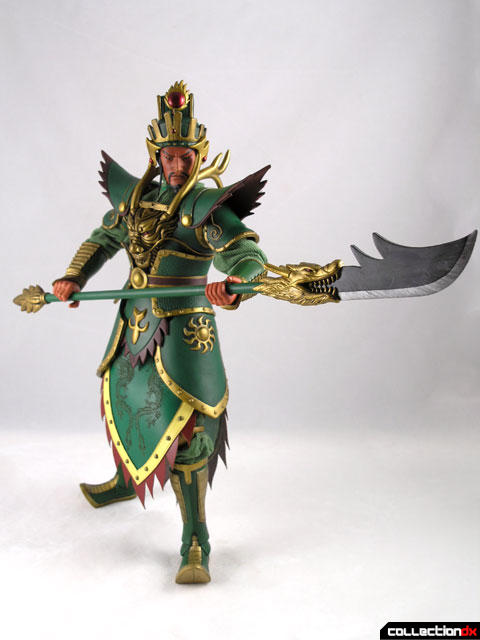 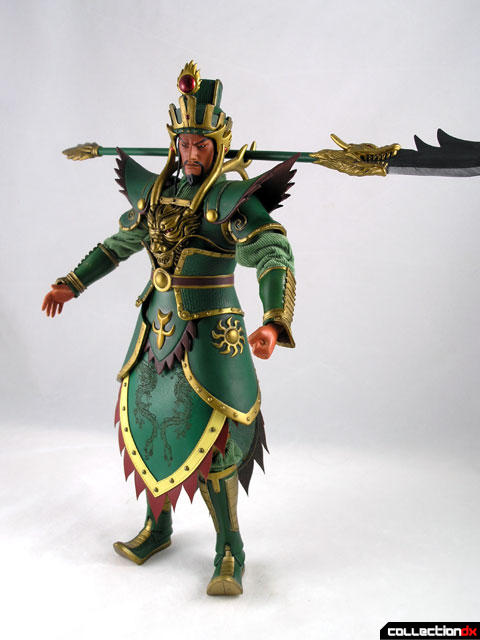 In addition to the variant hands and spear, Guan Yu also comes with a helmet. This helmet is lined with foam padding to allow a snug fit onto the head. The helmet also has a small ornamental bit on the front center that was bent on mine. It is attached via a flexible metal wire, so it easily bends back into place. 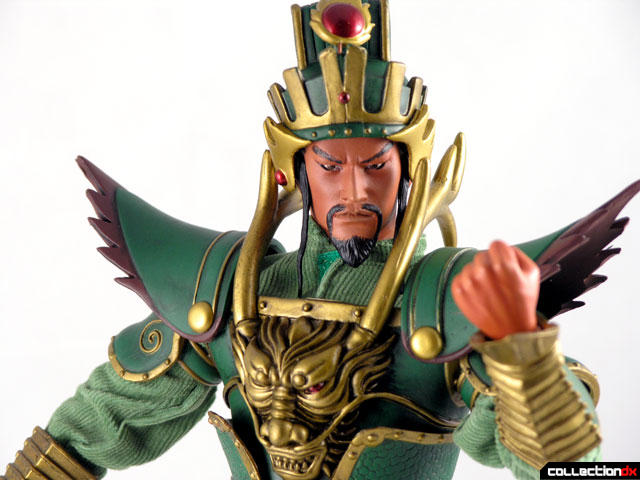 This is  a fantastic figure, and If you are fan of 1/6 scale figures, I can’t recommend it enough. You can pick up yours today at UniToyzone. 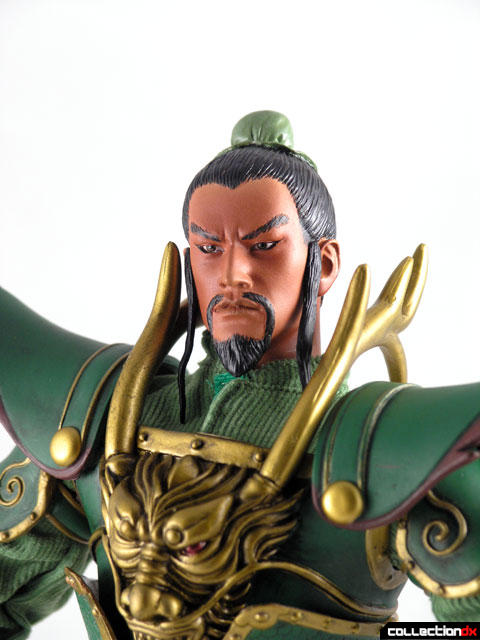