I know I have been reviewing a lot of Brave Series toys as of lately, and I have many more to do. Some of you may ask, so what are you going to review after the Brave Series figures are all covered? Well, I am glad you asked this question. I am going to give you a sorta pre-review of the next toy line that I am going to bring you. The toy line I am speaking of is Eldran.

To sum this up, Eldran is the toy line launched by Takara Tomy after the Brave Series franchise was already well established. Some of the more well known characters from this series are Raijin Oh and God Raijin Oh which JoshB just reviewed.

Today I will be reviewing Go-Saurer from the anime Nekketsu Saikyo Go-Saurer. Go-Saurer is the main mecha character that is made from the combination of 3 mecha dinosaurs, Mach Ptera, Land Stego and Thunder Brachio. These 3 mecha dinosaurs can also form Saurer Jet, which is basically a transportation mode that has some defensive capabilities.

The sample for today's review was provided graciously by our friend Jeff Stein over at High End Transformers. Please check them out or just click on the eBay link at the bottom of the page for a direct link to the item reviewed today.

To start off with, Go-Saurer comes to you in a beautifully illustrated, heavy corrugated cardboard box shown below. Even though this toy is Takara/Tomy, the box is very similar to the packaging used by Sonokong in the past Brave Series re-issues I have reviewed. The only real difference is that the flimsy plastic inside tray is replaced with an even cheaper feeling flimsier cardboard insert. 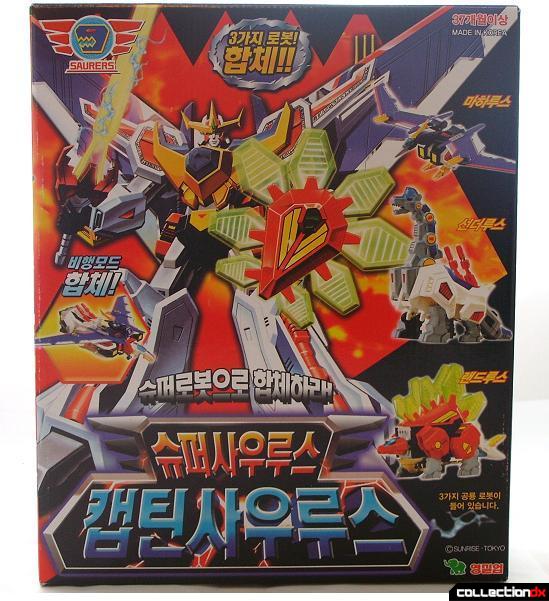 I will begin now showing you the 3 mecha dinosaurs that make up Go-Saurer. The photo below shows all the components that make up Go-Saurer in their dinosaur alternate mode. From left to right is Land Stego (red dino), Mach Ptera (blue dino), and Thunder Brachio (white dino). Each figure is comprised of quality ABS plastic as well as flexible PVC. The construction is light but very sturdy allowing years of play. 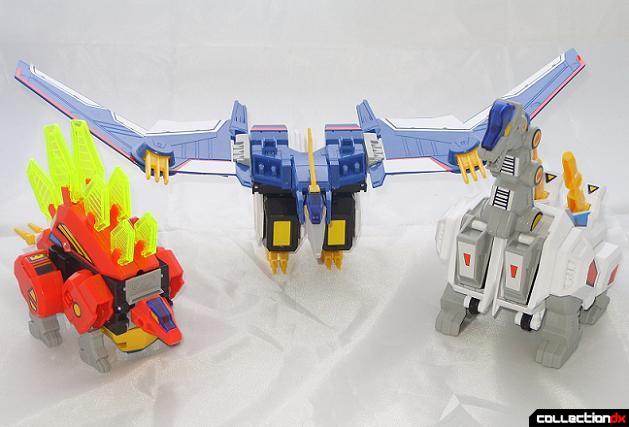 First up, Mach Ptera, the blue mecha pterodactyl that makes up Go-Saurer's arms and wings when in robot mode. Mach Ptera is the largest of the 3 mecha dinos with a wingspan of nearly 17 inches! The figure has articulation in the wings, legs, and neck. Notice the light blue clear plastic pilots cockpit. You can almost make out a pilots seat. 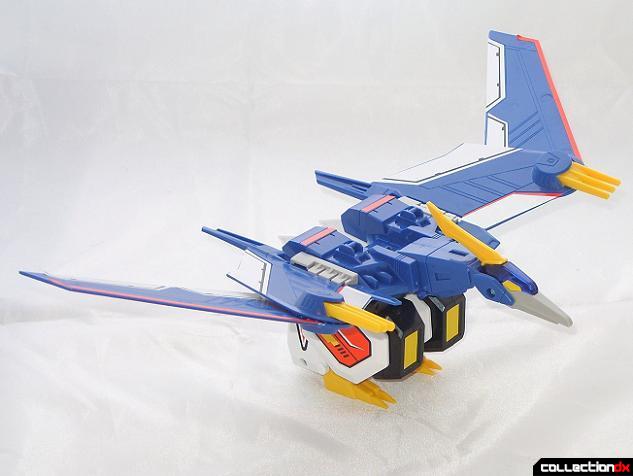 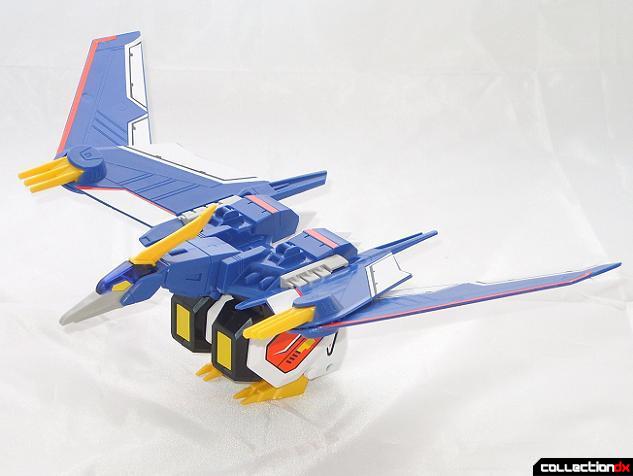 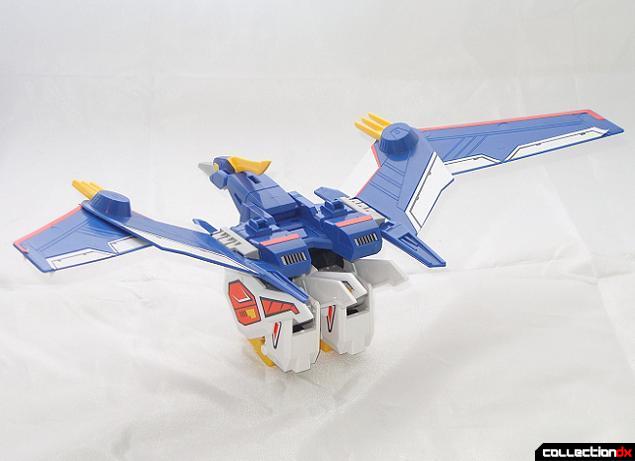 Moving along we have Land Stego, which is the red mecha stegosaurus that makes up the head and torso of Go-Saurer. This part of the team has very little articulation with only minor movement is the legs and adjustable lasers mounts on its tail. As with Mach Ptera above, Land Stego also features a light blue clear plastic pilots cockpit canopy. 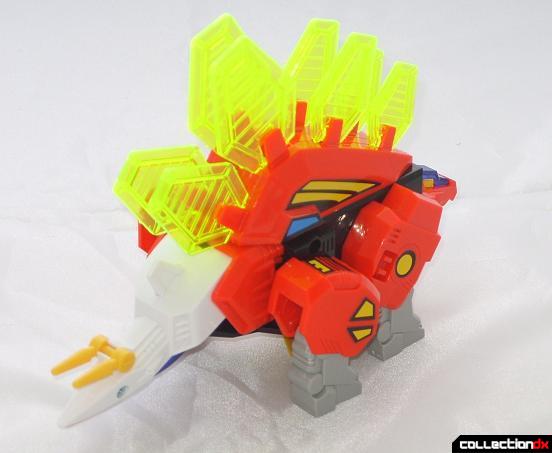 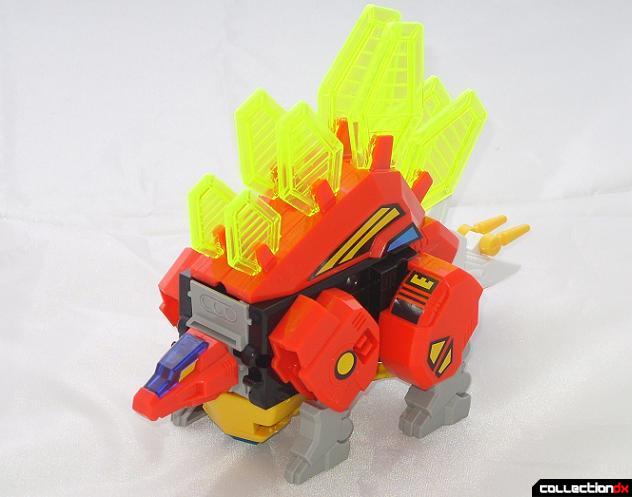 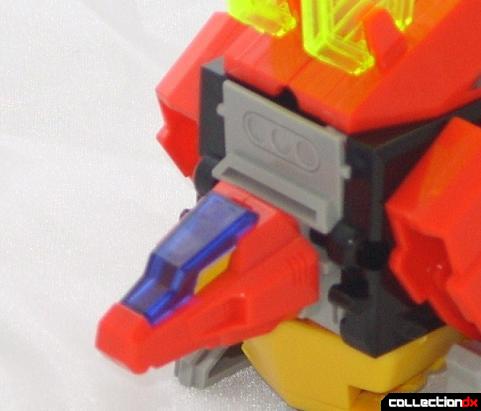 Lastly, we have Thunder Thunder Brachio, which is the white mecha brachiosaurus that makes up the legs of Go-Saurer.. Thunder Brachio features articulation in its legs and tail as well as the jaw and the cannons mounted on it back. Like the rest of the team above, it has the visible cockpit canopy. 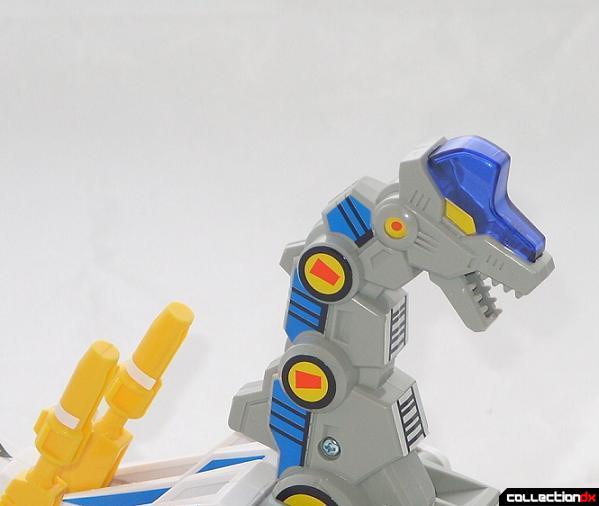 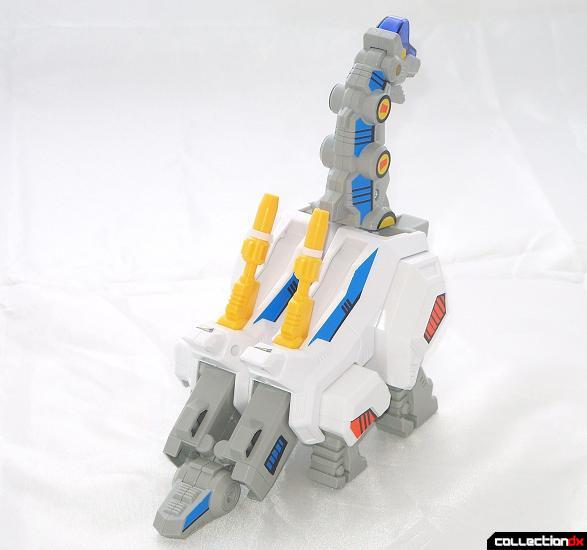 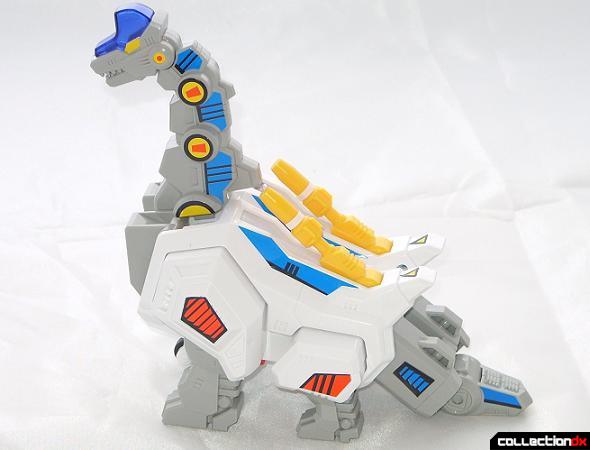 Before I get into this group of mecha dinos ultimate form I want to show you the very cool alternate Saurer Jet mode. In this mode, all the parts come together to make the impressive jet you see below. In this mode Land Stego's tail becomes the front fuselage and cockpit but all other components remain in the same place they would be in the ultimate form of Go-Saurer. Notice how this mode has a very Gundam like appearance. It reminds me of Gundam Wing or a Gundam Wave Rider. 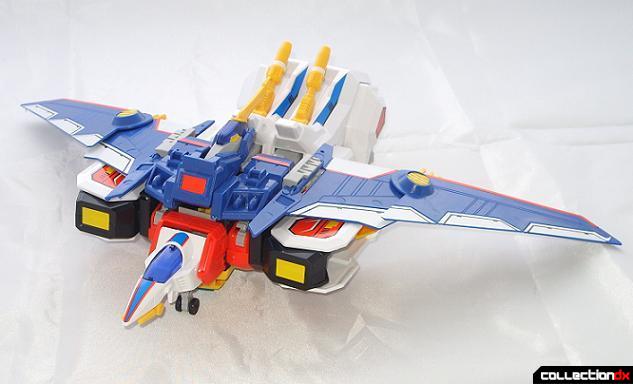 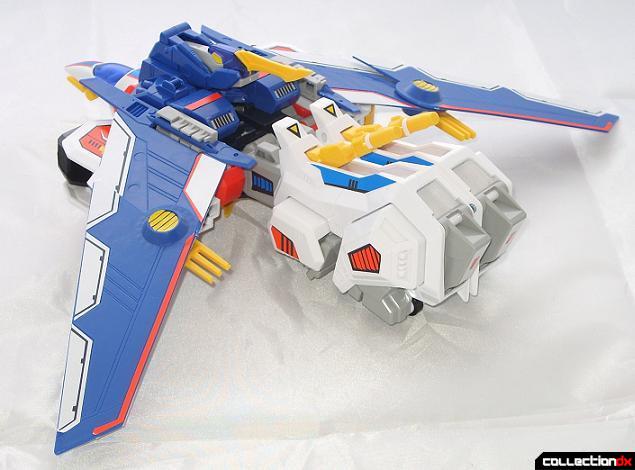 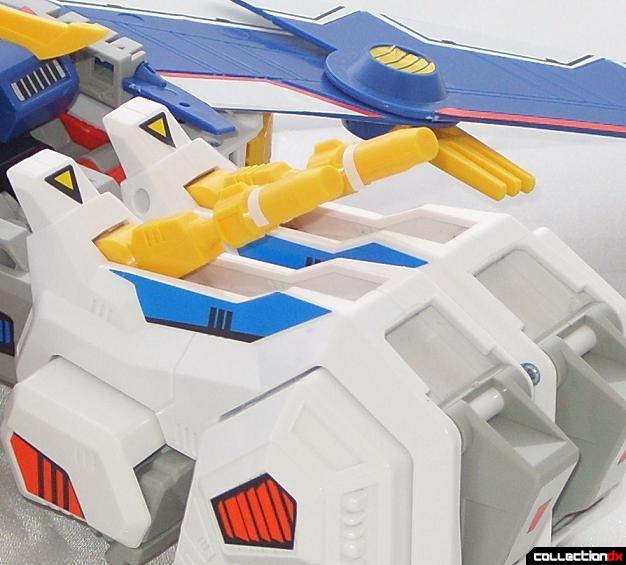 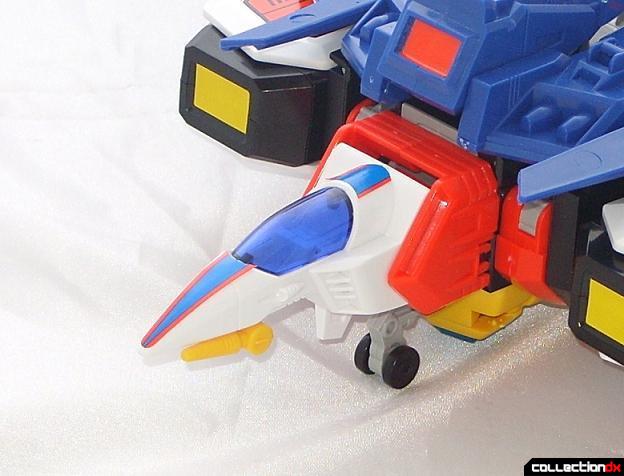 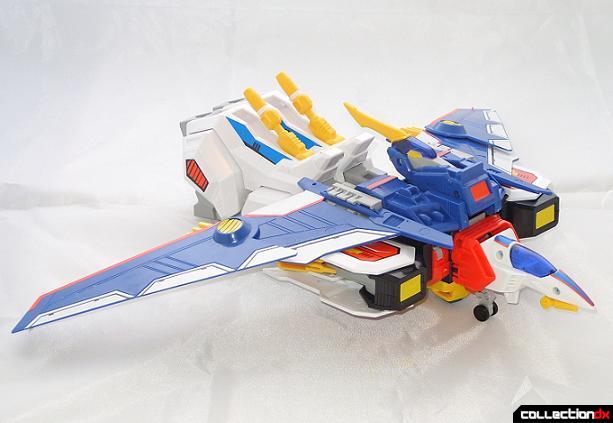 Finally, all these above dino's can combine to make the very impressive Go-Saurer! As you can see below, Go-Saurer includes a sword and a shield. You may notice that the shield is made from the back of Land Stego. 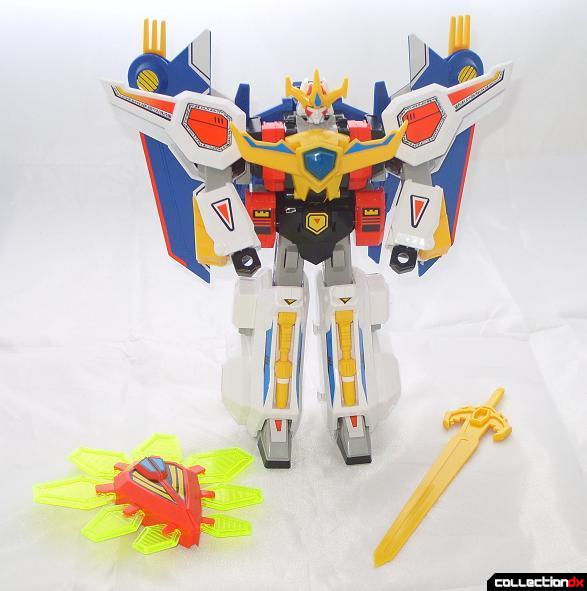 In this mode Go-Saurer stands approximately 10 inches from head to toe and features articulation in the wings, shoulders, elbows, and oddly enough in the knees. Go-Saurer is able to have the wings opened or closed. I prefer them closed. I think its just looks more proportioned that way. 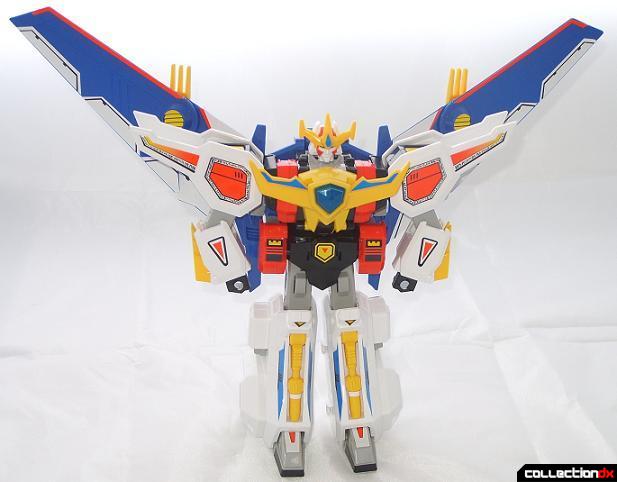 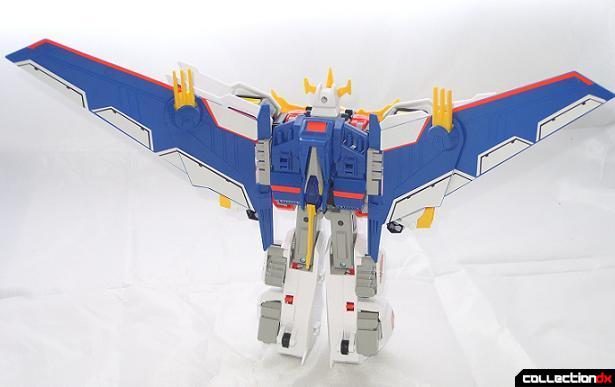 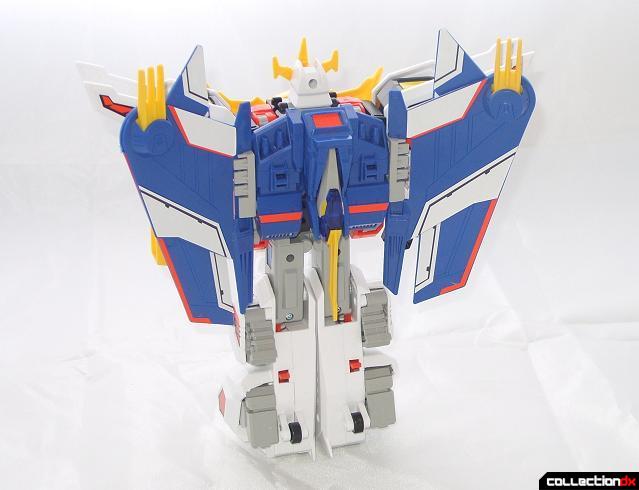 As you can see, Go-Saurer is able to wield the included sword and shield for battle. Again you may note that the color scheme of this figure looks very Gundam-ish with the combo of the red, white, blue and yellow. On a side note, this is a re-issue, the original figure had gold chrome in place of the yellow parts. 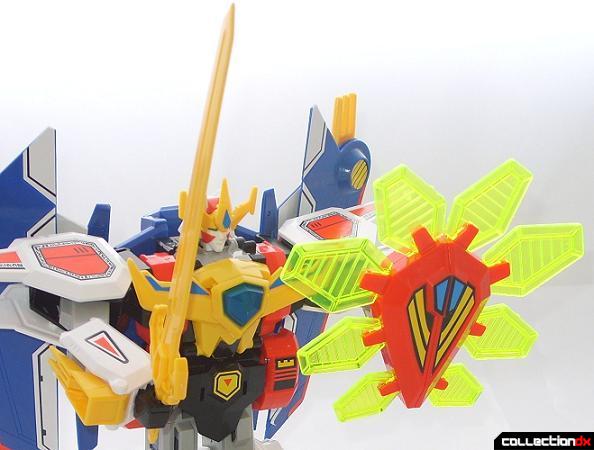 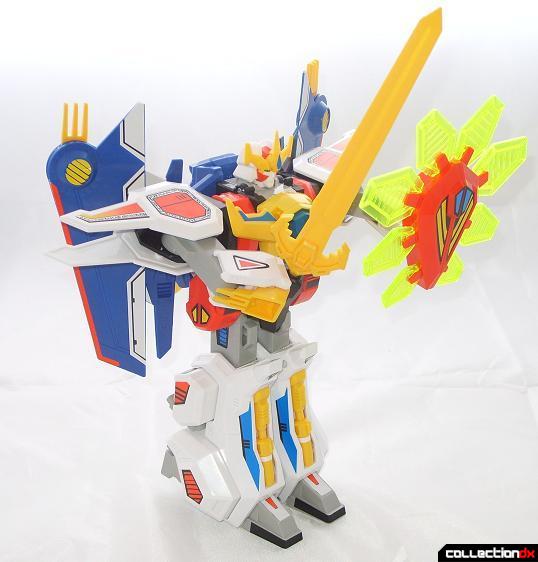 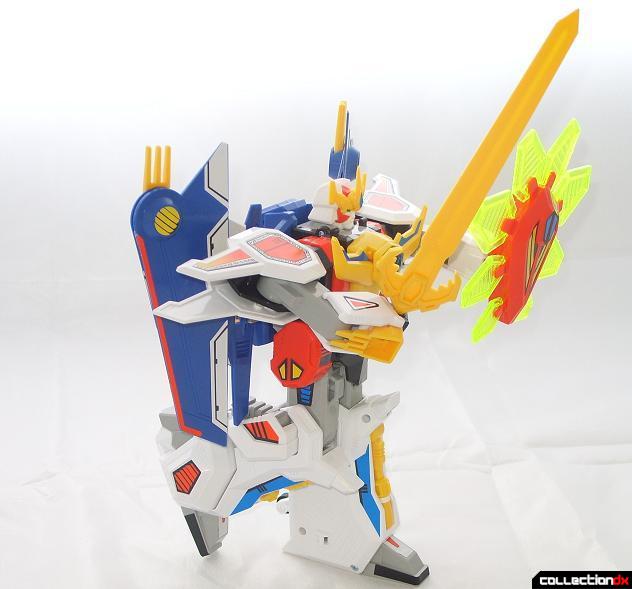 In conclusion, I feel that Go-Saurer is a great toy and I am very happy to display it with it's other Brave Series brethren. The figure is fun and is well made, these factors are 2 of the most important things to me when I evaluate any toy. The only thing that I would wish to change about this figure is possibly adding a firing gimmick and maybe a little more articulation. Even without those extra gimmicks, the figure still remains fun, making it a must have for a Brave Series fan like myself.

Good work on the Brave reviews. I like seeing light shone on the neglected neglected corners of the hobby, and the Brave stuff is a huge, rich corner to explore. I've always felt indifferent towards the Eldran toys, but this is a good looking bot. Once you accept the chunky proportions and primary-color heavy palette, there are some neat things happening.

Thanks for the complement. Well, if you like combiners, I have a heck or alot more coming your way.

Remember that Takara and Tomy were competitors in the '90s and Tomy's Eldoran was competition to Takara's Brave series.

I was merely referring to the fact that this release is Takara/Tomy, as for the original being Tomy only, I did not feel it was actually relevant to the review because the companies are now combined and many people lump Eldran into the Brave Series because of the similarities.

I always go with the manufacturer at the time it was made, so I would have it Tomy as well.

I wholeheartedly agree, that's why I say Takara/Tomy because that is who manufactured this release
-Dan
CollectionDX LLC
Vice President/Co-Owner

Well, they shouldn't be lumped in because they were different lines by different companies, just like Hasbro's Transformers and Tonka's GoBots were competitors in the '80s but Hasbro bought Tonka and now owns the GoBots.

"Well, they shouldn't be lumped in because they were different lines by different companies, just like Hasbro's Transformers and Tonka's GoBots were competitors in the '80s but Hasbro bought Tonka and now owns the GoBots."

Hasbro might've bought Tonka w/ The GoBots lock, stock, & barrel, but they don't own Machine Robo. Bandai made Machine Robo and owns it for keeps and let's hope it's now and forever.

I have the first korean reissues of these toys. Complete with gold chrome. The combined Great Gosaurer is absolutely hugenormous.

Awesome! Do you have pics? I wish I had the gold chrome version, I bet it blows this version away.

I can take a few. I've had it well before I realized the full worth of these toys so they're not in the best of shape. One day I'd like to own untouched boxed originals. But yeah. I'll take some pics today and throw em up here.

took a buncha pics and put em up in a comment but they got zapped. pic posting not allowed on cdx?

I hope this means we'll be getting a review of the Tomy Raijin Oh as well!

Very nice. Thanks for sharing.

Great stuff! Thanks for sharing Servobot!

Great Ganbaruger is larger, though.

Does anyone know if Magma Tyrano or GranTops are for sale anywhere? My searches have found nothing sadly.

I got a hold of the figure from the same seller and I have to say that I was not thrilled with it once I got it out of the box. Compared to the other figures I have from Sonokong this figure's boxing left something to be desired. Gosaurer was just held together with very flimsy twist-ties on a cardboard sleeve. All the other Brave series figures are in nice molded plastic trays. Oh well.

My other nagging issue with the figure is that once Gosaurer is formed, there is nowhere to put the stego tail/jet canopy and the brachio head. They just have to sit on the shelf so where looking lonely.

Other than those two nagging things I have found this figure to be a great addition to my collection. The figure does come with a sticker sheet and once those stickers are applied, the figure really pops and looks great. Overall, a wonderful toy.

I have to say that this is one of my top favourite Japanese robo mechas because its like something out of Super Sentai in a way.