Masami Obari is a notable figure in mecha animation. He has this amazing ability to take mundane design and tweak it just enough to give it a dynamic appearance. There's something about his odd affinity for taking organic motifs like muscles and exaggerated facial features that many have found compelling. The so-called "Dragonar-1 Ohbari D-formation" found in the opening sequence of the show Metal Armor Dragonar is still as iconic today as it was over two decades ago.

It's strange to think that this singular variant of the titular Dragonar-1 would be popular enough to convince not one, but two companies are making toys of it. In Bandai's case, they found it necessary to make two completely different versions of the Dragonar-1. One was made to match the original design from Kunio Okawara and the other, "Opening Silhouette" version that brought the dynamic Dragonar-1 to life. Keep in mind this toy shares next to no parts with the standard Dragonar. 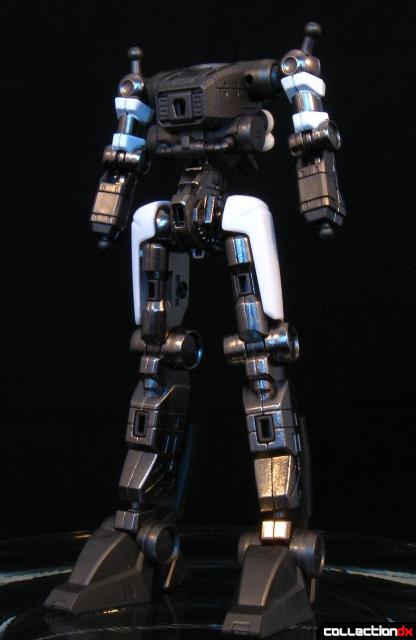 Right out of the box you are presented with the gleaming metal and plastic internal frame of the Dragonar. The legs and part of the arms are hefty diecast. Each joint is nice and solid with the only annoying part being the shoulder ball-joints which may pop off with extreme posing. Another odd thing is the two white panels on the thighs that have to be removed before the armor can be applied. 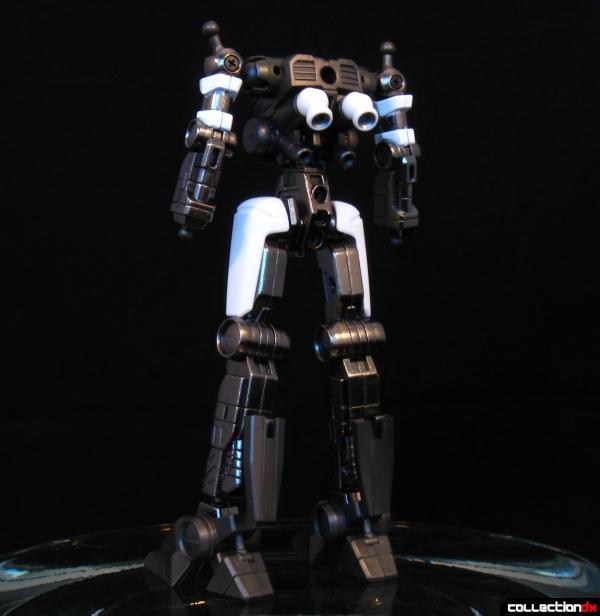 From the rear we can see the built in vernier nozzles on the backpack. These can rotate in a complete circle with the nozzles can pivot up and down. 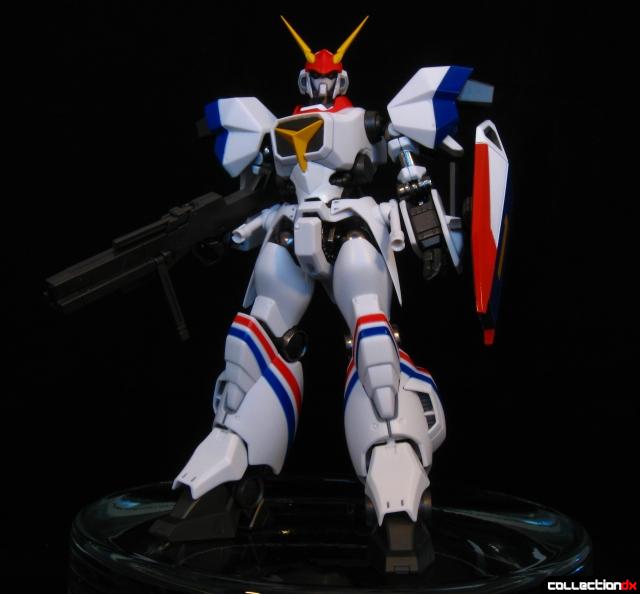 Applying the armor is quick and easy. Everything fits in without too much forcing. The resulting piece oozes with quality from its shiny white exterior to the sharp red and blue detailing. It really looks powerful even when just standing. The completed figure is roughly 1:144th scale which makes the toy about 12 centimeters tall. The figure comes with many optional hands: one for the railgun, two fists, two saber/ knife holding hands, and two splayed hands. The hands a little rubbery but feature some nice detail like the small machine gun ports mounted on the back of each hand. 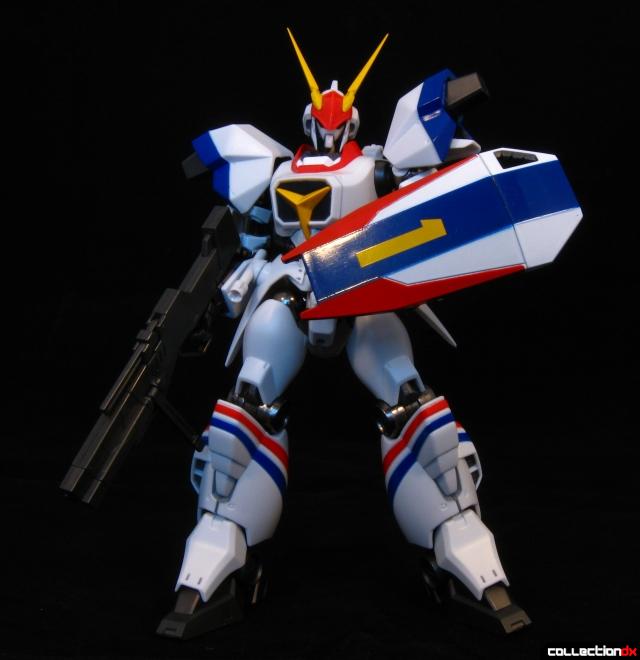 The paint apps are incredibly sharp. The detailing on the shield is especially nice. This shield can be secured arm via a rotating clamp. 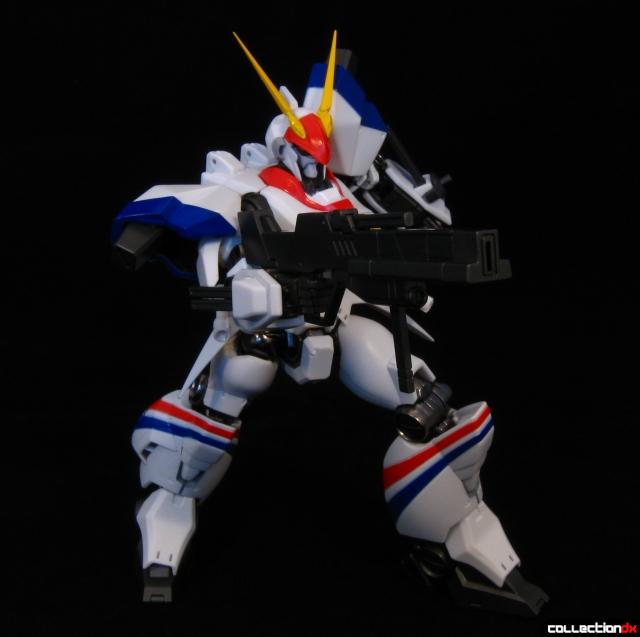 The railgun fits into a dedicated hand and features a movable foregrip and and moving ammunition slot. The toy comes with five extra clips, one for the gun and two for each forearm. These parts are small, but they fit snugly into their receptacles so you don't have to worry about knocking one onto the carpet where it will be lost forever. 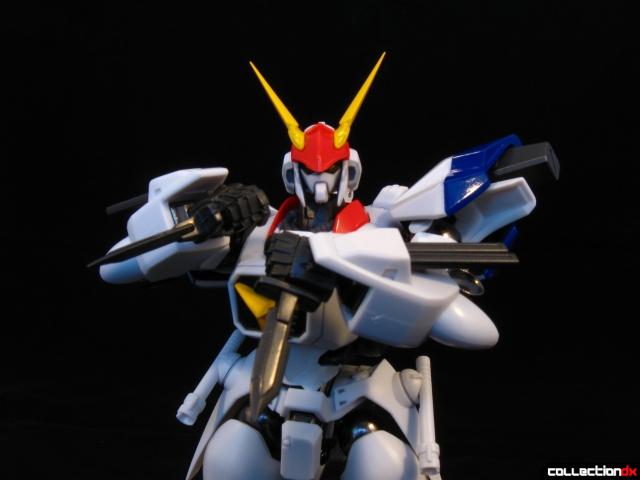 The figure comes with a pair of knives stored in calf mounted sheaths. Thanks to this toy's ample amounts of articulation, it can make great use of its weapons. 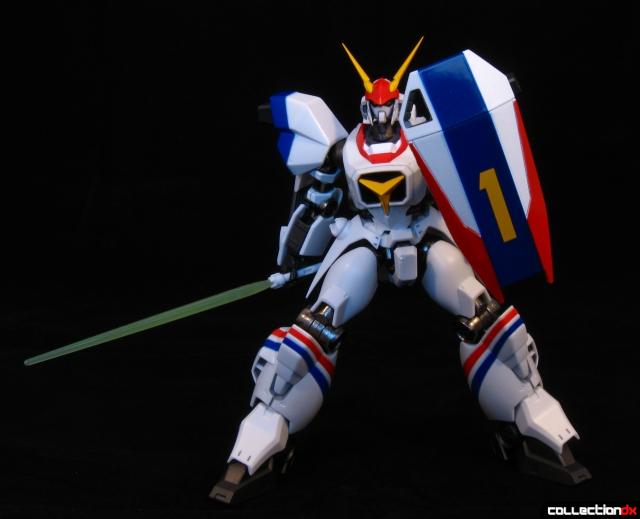 The Dragonar has two Laser Swords stored on rotating hip mounts. Again, these parts snap in nice and tight. Each sword has a removable green laser blade. The shield also features an alternate handle so the figure can grip the shield its hand. 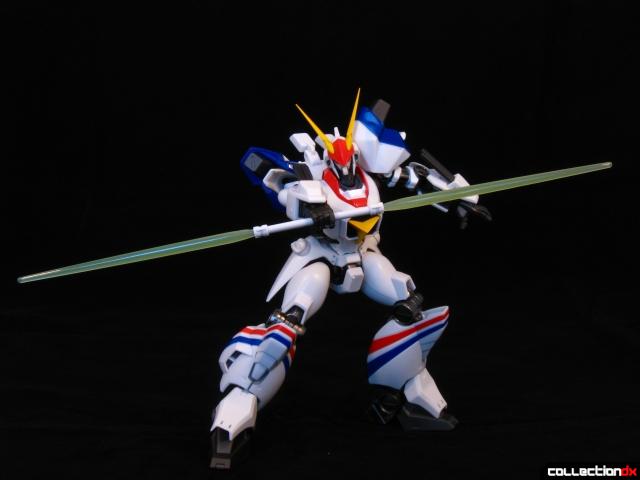 Also included is a linked sword for some twin-blade action. 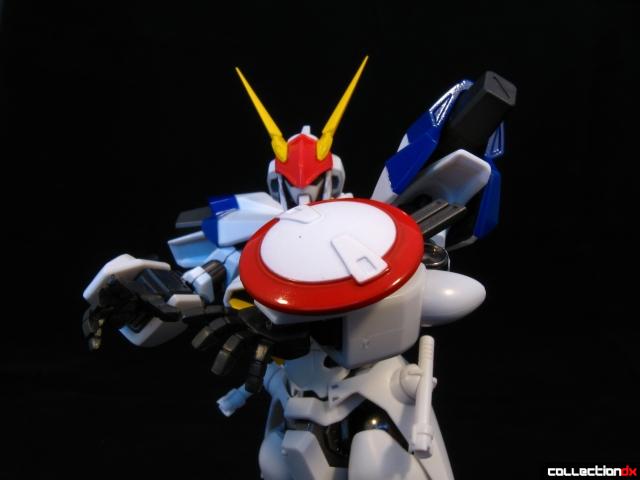 One of Dragonar's distinctive weapons is this discus shaped throwing bomb which can be clamped on the figure's forearm. Also each of the gray blocks sticking out of the shoulder functions as a removable hand grenade. 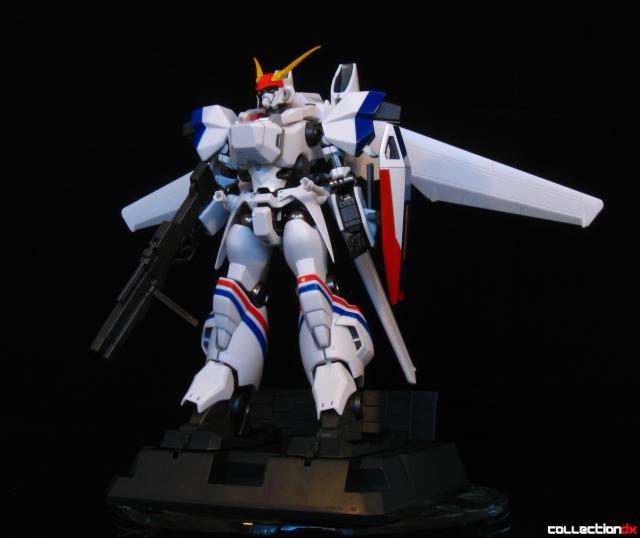 One of the more familiar accessories to the Dragonar is its Lifter unit. Even modern shows like Gundam SEED and Code Geass owe their funky backpacks to Dragonar's distinctive set of wings. Also included with the figure is a display base styled to look like a launch catapult, complete with blast shields. Attaching the Lifter is fairly straight forward with the only problem being that you have to remove just the yellow crest from the chest in order to attach the front portion of the Lifter. One thing that would have instantly aided the figure is a small storage drawer within the display base for sticking those tiny extra parts. 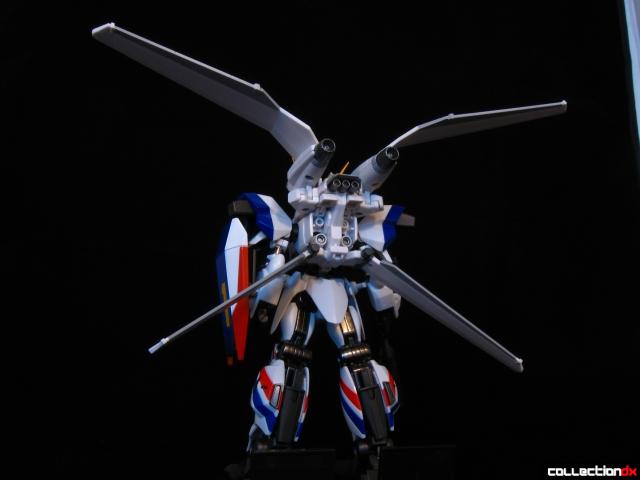 The main wing assemblies can pivot up and down while the lower wings are hinged to swing in and out. 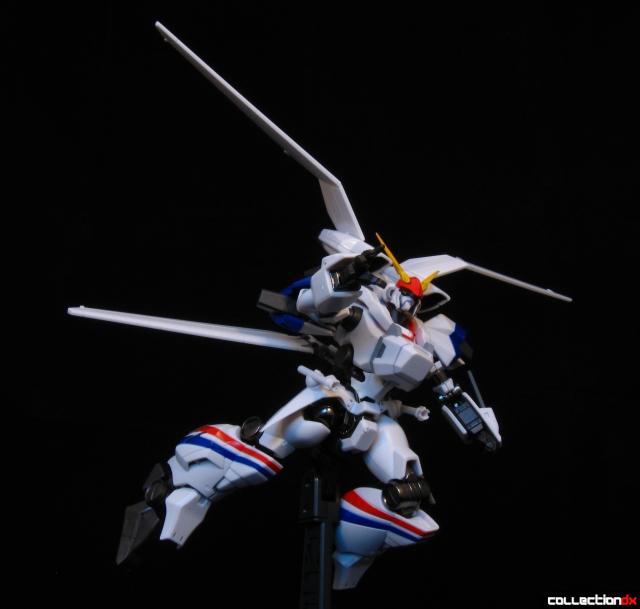 The display base includes an arm attachment for display the toy in flight. This arm has several joints, all of which feature some kind of ratcheting for stability. 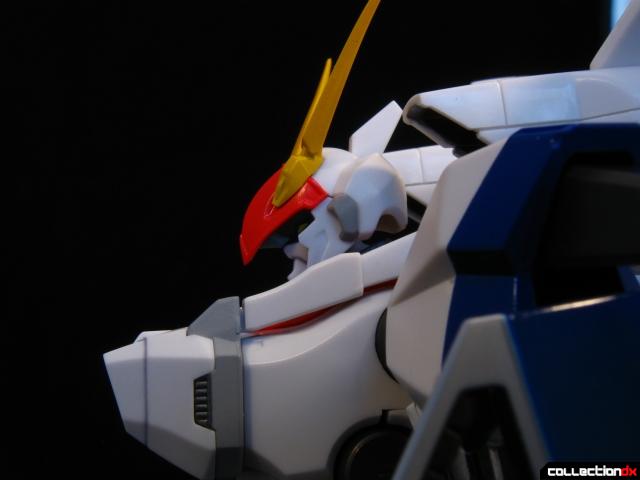 The Soul Spec Dragonar-1 is a solid toy. Everything from the inner frame to the outer armor comes together to make an outstanding figure. While it is a little small for its price, the fit and finish of the toy make up for its size. Masami Obari's Dragonar-1 continues to delight and fascinate mecha fans with its brief and memorable appearance, which is given more permanence thanks to this toy.

3 comments posted
I've had this piece in my

I've had this item in my collection for about a year and a half now, and it's easily my most beloved piece and has never quite been topped. There's something about the look of this particular Dragonar that just strikes all the right chords with me. It's truly a beautiful thing to behold, and with tons of diecast, articulation, weapons, and probably the sturdiest goddamn flight stand I've seen on any toy/kit/whatever. Anyone with a passion for real robots or 80's anime/OVA style mecha owes it to themselves to pick this thing up NOW.

Great review and the dark background provides great contrast to the photos, I myself picked one of these up recently at a good price. Its a shame I overlooked this piece before, its great. I have the Cavalier one which led to the purchase of this one, but this version is definitely my favorite aesthetically.

Ever since I picked up the SOC Spec Lazyner at the last HLJ sale I've been kicking myself for not getting a Dragonar as well; I've been surprised at how fantastic and enjoyable the SPECs are. I don't care much for the proportions of the Cavalier version (and the probe-droid-hat is ... well, interesting, to say the least), which unfortunately seems to be the only one I can find for a decent price... go figure!