Okay, so I'm no expert on Saint Seiya, like Atom is. What I do know, however, is that there just aren't too many toys of South Asian characters! :P

I've always been aware of this, but Atom's Mighty Muggs Mola Ram review really punctuated the fact. So...I've been recently looking to track down toys of Indian folks! (And, yes, I picked up that Mola Ram!) 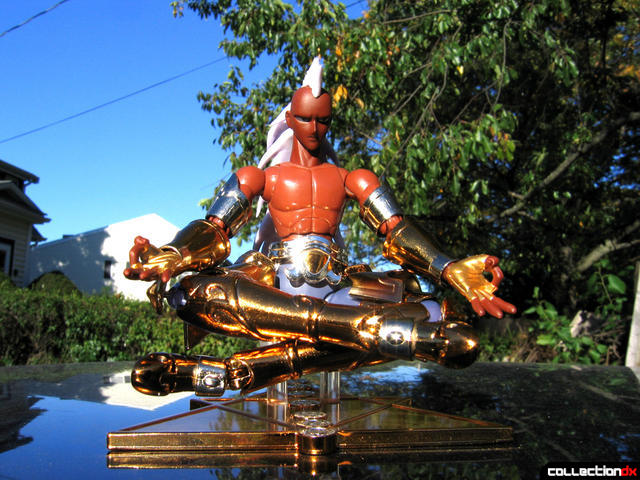 During one of our conversations, Atom told me about Chrysaor Krishna, one of Poseidon's Marina generals in the "Poseidon" series of the cartoon: a tough antagonist in the story. Though there's an obvious mythological flavor to the show, he assured me that this wasn't THE Krishna from the Bhagavad Gita. Oh well...ya gotta start somewhere!

Someone says something, one thing leads to another, folks can't work out their differences peacefully...and the next thing you know, Shiryu and Krishna are kicking the dog snot outta each other!

Yeah, at first, hearing that Krishna was a bad guy was a bit of a turn-off (to say nothing of his purple-ish white mohawk! BUH!?). Fortunately, upon seeing the whole episode, I was pretty pleased with how cool the character actually was. Sure, he was no divine incarnation of Vishnu...but he was a badass. Like I said, ya gotta start somewhere!

So, at the risk of rehashing what Atom's already done with these figures, I'm going to give you my take on this figure...from the abject beginner's point of view. First, I took all the pictures outside to try to capture that hard shine off the gold chrome in the sunlight. Sometimes, online pics just don't do that chrome justice! [mmmmm...."chrome justice"!] 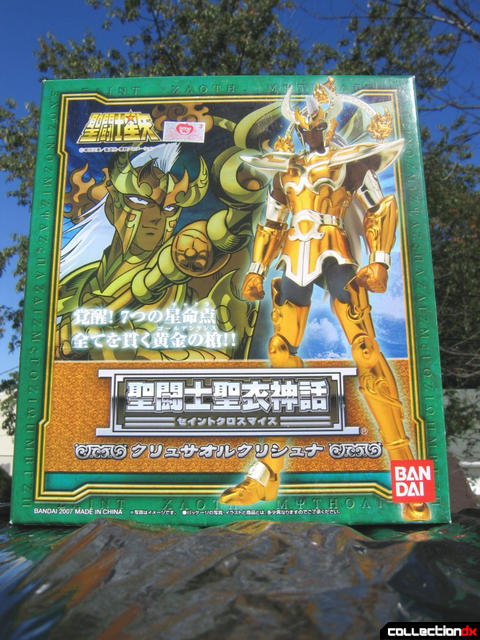 The outer packaging is hot. The box opens into halves like a book (affixed with velcro), and contains the main figure with some of the armor on the left-hand side, while the right-hand side displays the rest of the armor and the "Chrysaor Object", a gold statue in a seated position on which to store the armor when not in use. 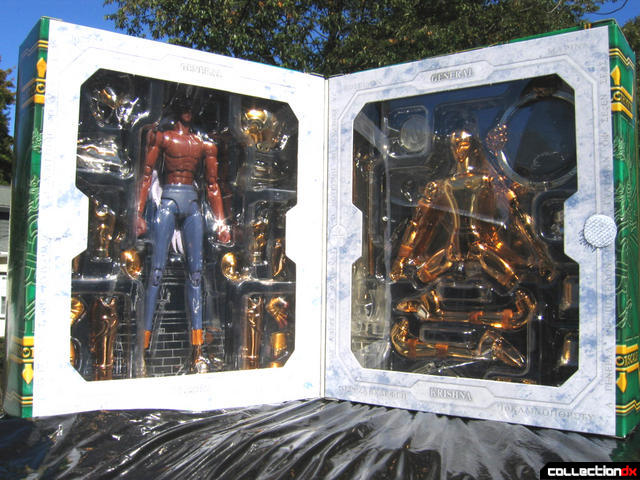 Once you free the 7" figure (to the top of his mohawk) and all the thousands of microscopic bits that complete his armor, the fun begins. The instructions are printed on one sheet (as I discovered to my great relief!), so I wasn't too daunted by the assembly process. But I'm getting ahead of myself...

The base figure is a super-articulated PVC construction with about as many joints as any action figure fan could ever hope for. Double-jointed neck, shoulders, elbows, knees, and ankles. The only issue is that it feels a bit rubbery so the friction in the joints can be hit or miss at times. For the most part, the Bandai quality holds true. 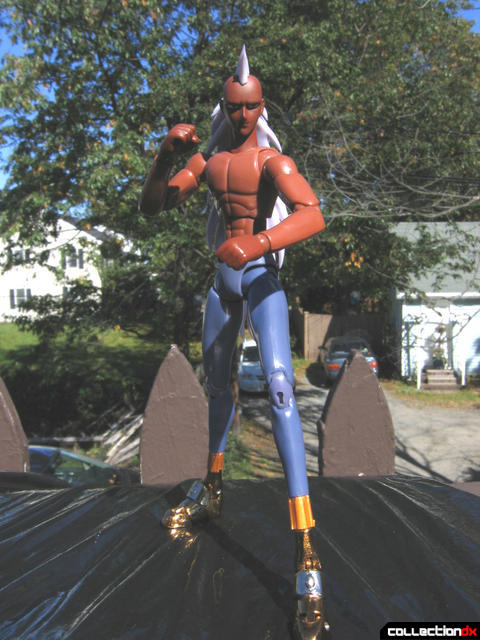 The unarmored figure is pretty light weight, so there isn't much pressure on the joints. The feet are actually diecast, with absolutely rock-solid articulated toes and double-jointed ankles! The added mass down there really helps to stabilize the figure.

Another thing that's cool is the hair. It's articulated! 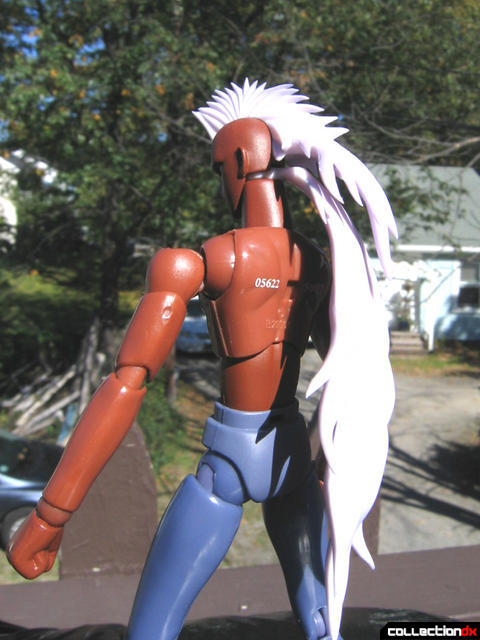 Okay...super-articulated. We get the point. He can go kalari payattu on your ass. What's next?

The armor, of course! 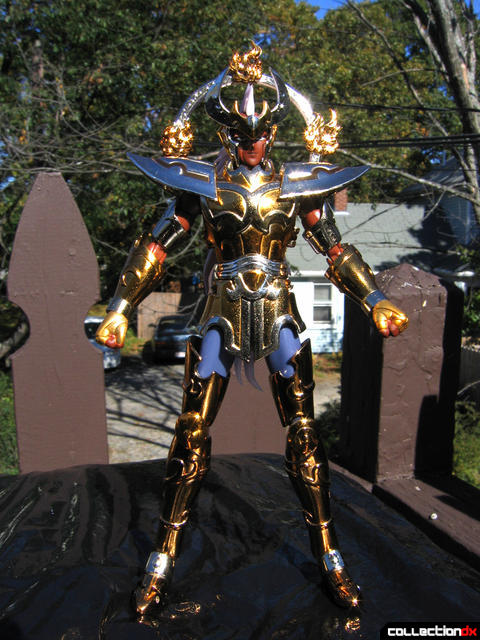 Remember how I said the figure is softish PVC with a bit of a rubbery feel? Well, it's that texture that makes the armor stay on. The bulk of the armor is...wait for it... 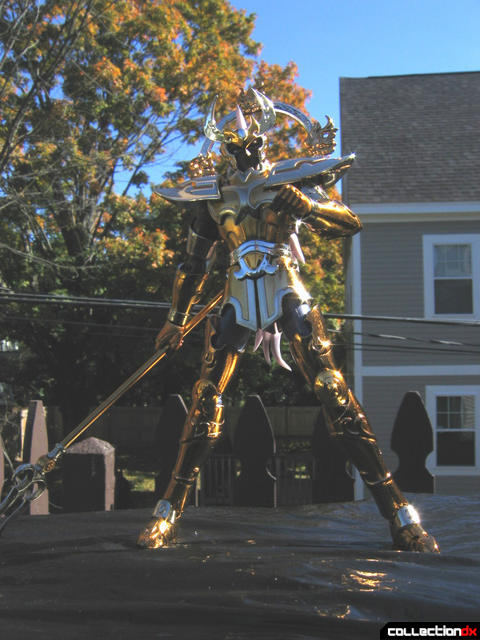 Of course, if you're at all familiar with these figures, you know that already. But if you're new, like I was, it's a treat! As I mentioned before, the feet are solid diecast. The armor on the lower legs, thighs, hips, torso, upper arms, and forearms are all diecast. That only leaves the ornamental ring on his back, the mask on his face, the shoulder pauldrons, and the armor around his waist made out of plastic. Even his lance is diecast (though the extended lower half of the handle is plastic). Not bad at all!

The assembly process took a little bit of time, I must admit. After about 10 minutes of fiddling out in the cold autumn New England morning, I finally got all the tiny bits to line up right. The metal armor slips onto his rubbery PVC frame fairly easily, then you simply press each piece as high as it will go on the limb to create a solid friction hold. 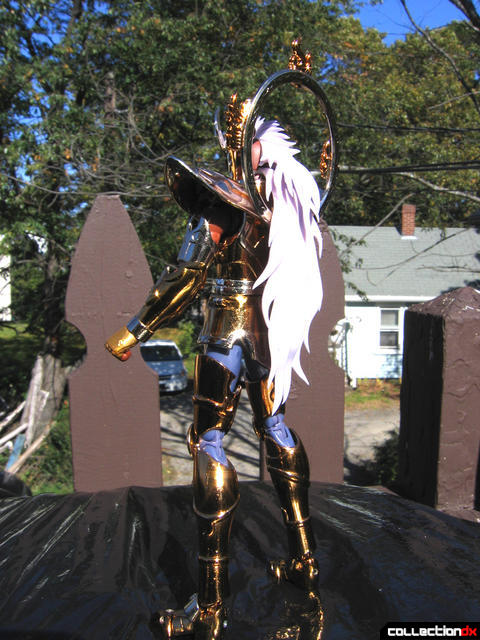 This is my only beef with the figure. Those who know me know I'm generally not a fan of modern toys that emphasize "anime-accuracy" over imaginative play value. In most cases, these modern collectibles are way too fiddly and require too much book-keeping for all the bits and accessories. In this particular case, the above is mostly true, but fortunately, it's actually not nearly as bad as many modern chogokin toys.

The complete armor comprises approximately 23 individual parts and connectors. It takes a bit of muscling the figure around to get all the parts to go on and stay on. While pushing one armor bit into place, two others may come loose. It's a bit of a dance. A dance of frustration. But like I said, I've seen worse. Before long, you'll have your figure together and suited up just fine. 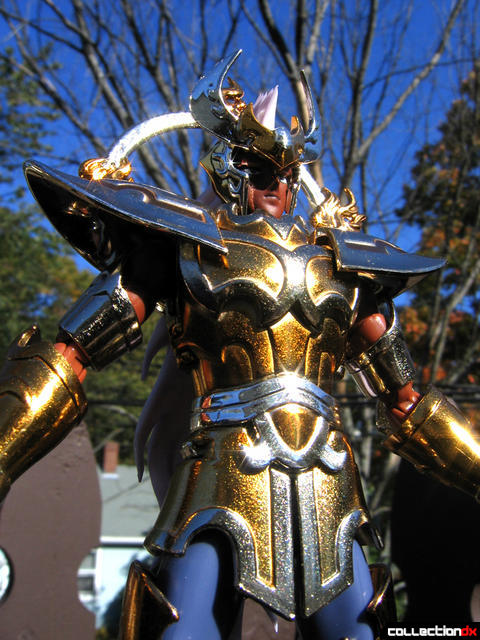 The added weight of the diecast armor creates a noticeable strain on the PVC joints, but the figure isn't too floppy. I'd call him..."wobbly". Perhaps even "tipsy". But that added heft is satisfying, and because the diecast is on the outside, the toy becomes an enjoyable tactile experience: cold, hard diecast against your snobby mitts. Plus, the armor stays relatively put--that's key for a figure like this in mitigating the modern toy frustration factor.

I'm also pleased to report that the vast majority of the base figure's articulation is preserved in his armored-up form. No, he's not gonna be busting out any windmills, but there are nice touches like the shoulder and hip armor being mounted on hinges to allow full movement of the joints. 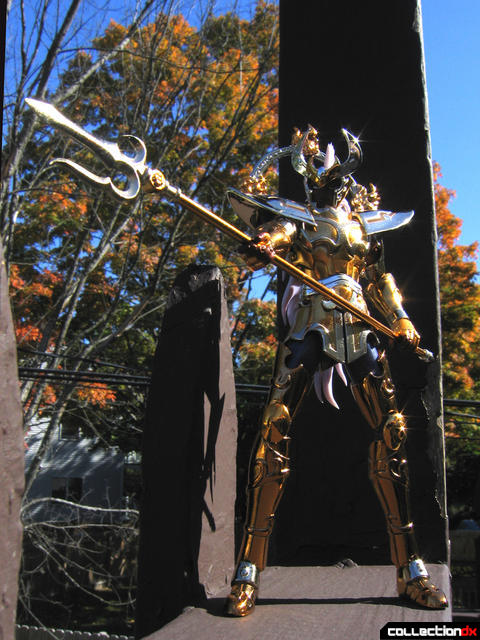 Moving right along, we have the stand. This thing's pretty groovy--it represents Krishna floating in a cross-legged position. The base is chromed gold plastic in the shape of a cool pentagram with the seven chakras embossed on it. There's a set of clear plastic bits that attach to this base and to Krishna's butt to simulate his floating meditation. 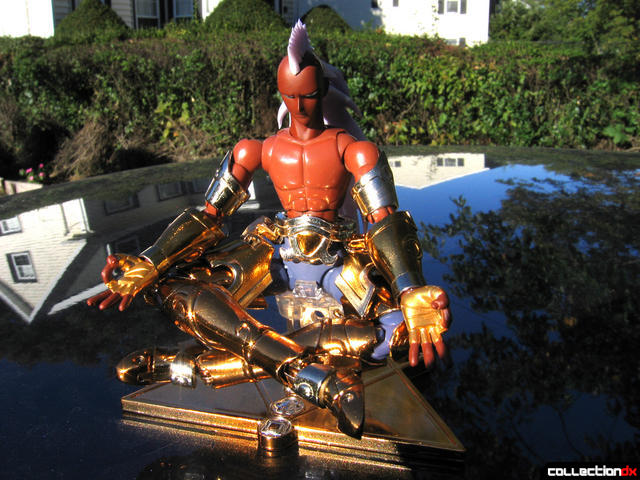 I have him posed here without his mask or chest/shoulder armor...just like at the end of his fight against Shiryu, after his armor got shredded. This is where he uses his finishing move, Maha Roshini, against Shiryu! Pretty cool scene. Anyway, he can easily be depicted with or without his full armor. The only thing to note here is that the hinge joints on the waist armor from which the hip armor swing need to be replaced with angled versions to support a natural-looking cross-legged position.

Meh. What can ya do? 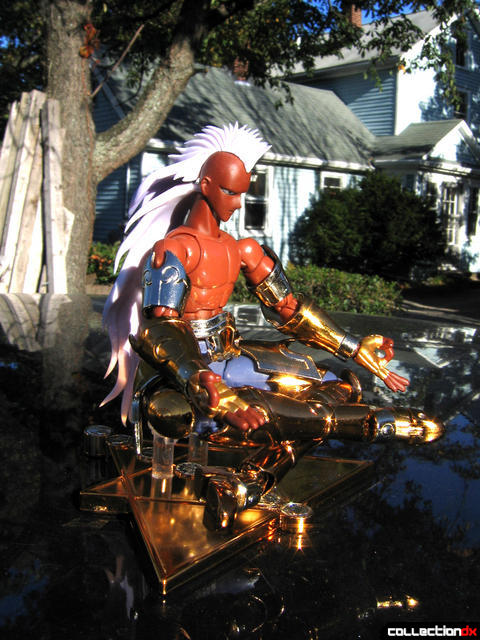 In addition to supporting the figure during his meditative attack, the stand also holds Krishna's "cloth", or armor. At rest, the armor forms the "Chrysaor Object", an essentially static gold statue that the armor fits onto. I don't think it's ever depicted in the anime (not sure about the manga), but this is pretty cool. It actually resembles something you might find in a Hindu temple! (All right...maybe not exactly...but it sure beats the mohawk!) 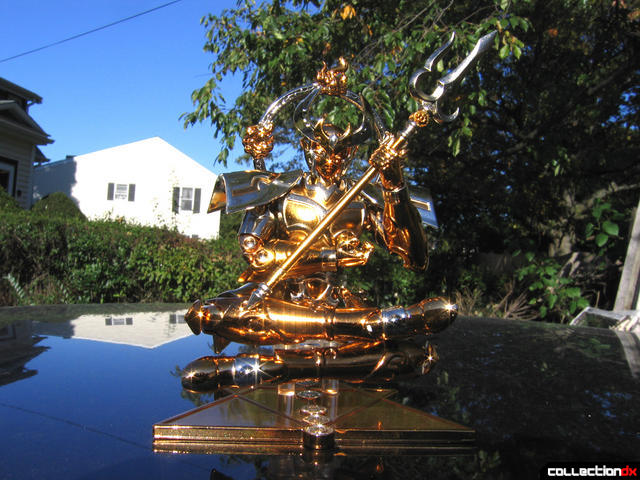 Finally, for a couple hundred more yen, fans can pick up a special release of their favorite Saint Cloth Myth figures that includes a small metal plate, engraved with an image of the character. It comes inside a folded card sheet with the usual manga art of the character on the outside. The inside shows the plate and Krishna's bio-data! 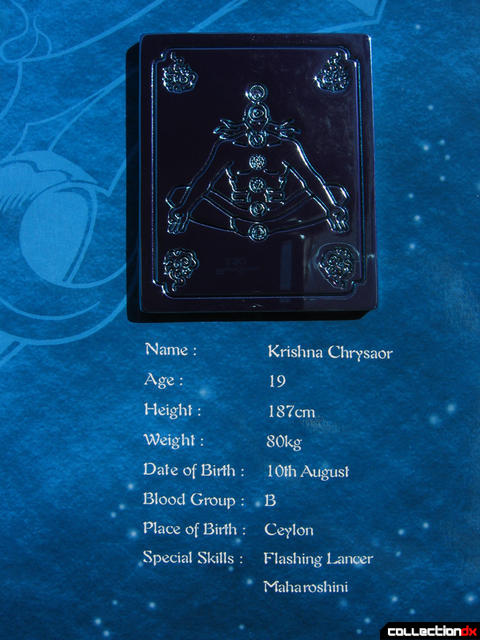 And before I let you go, I figured I'd try my hand at shooting a teaser video outside! Just like with the pics above, I wanted to capture the awesome shine off the figure's armor. Of course...all I really ended up capturing was three minutes of over-exposed, graininess! :P

For better or for worse, here it is!

13 comments posted
The Indian contestant in

The Indian contestant in G-Gundam had an awesome cobra-shaped Gundam,I would assume there's been at least one toy or model kit of it,maybe you could add that to your Indian figure collection. The pilot was a pretty cool character,too.

Hot damn! You're right...good looking out, man! I just found this on MAHQ. Hey, robots count!

Oh, sorry about the mixup about the Mola Ram review, Atom--I saw the figure at JoshB's and he raved about it, so I assumed he wrote the review. Fixed! Thanks again!

My first post. Just to let you know there's an important character in the original Mobile Suit Gundam (0079) who's Indian, her name's Lalah Sune- she pilots a mobile armor called ELMETH. Also in Love Hina there's Kaolla Su. BTW do you guys think the Saint Seiya 5 Bronze Saints "Reborn" boxset is worth buying at a discount price if I'm just starting to collect the Saint Cloth Myth line? They are the V2 version figures.

I have the sudden urge to make a Shakespearean Julius Caesar joke, but I'll restrain myself!

Anyway, good call with Lala Sun...though I'm not touching any Love Hina character with a 10-foot pole. I'm not trying to get too caught up in anime Indian characters...though, admittedly, I have that blue Dhalsim exclusive from Tao's Toys above!

As for the Reborn set, I'm not nearly as knowledgable as Atom, so I'll let him take it. All I can say is that the use of V2 figures is a very good thing...but looking at the pics, I'm not feeling the head sculpts too much. Just not the same quality in the latest figures. Just my 2 cents. Atom?

Yeah y'know I'm just a Roman History buff!! heh-heh...
Thank you for the welcome. The Love Hina series is ok but it's my wife who was into it even before we were married. I bought her the now HTF Love Hina figures made by SkyLuv. They're pretty cool, very "anime accurate" your fav! :-),but too girlie for our manly robots (j/k) although those Saint Seiya Myth Cloth by BANDAI and Revoltech's new line of Fist of the North Star figures are lookin' great! (blood, gore, great!)

Thank you for the welcome.

I was reading more into the "Reborn" set and it comes with necks too, apparently, to connect the "Final Version" characters' heads if you want to swap it with the V2 heads. It also comes with their "Final Version" crowns. I guess you can buy the appendices and the heads there should fit the V2 body if you're not feeling the "Reborn" heads. I don't get it. It's like Bandai admitting the V2 head sculpts are not good. I wished they just included the V3 heads and be done with it! Oh well.........
BTW the colors of their cloths are supposedly more accurate
this time around (ex: Dragon Shiryu).

Maybe you don't know, but in Saint Seiya the character named Shaka is also Indian. He appears much more than Krishna and in fact he's a good guy. Atom has even made a review about his figure. Maybe even he didn't know that Virgo Shaka was Indian.

It is very possible Adam was not aware of the fact that Shaka was an Indian character.

Oh, Krishna is in fact from Sri Lanka, not from India. Just now I noticed that his birth place was in the picture of the folded card.

It's a great toy. Nice review.