Pure evil has rolled into CollectionDX, and it`s name is Christine.

OK fans it's almost Halloween and I wanted to bring you readers something a little different than the usual monsters or robots we cover. Since most robot collectors love toys made out of die-cast or as you robot guys say, chogokins. I thought to myself...What would be more perfect than the mechanical monstrosity like Christine done in die-cast?

Before I get to the actual toy. I would like you to check out the trailer below, so you can get a feel for the car. For those who have never seen the movie, you may be scouring your local Walmart looking for a copy.

A 1958 Plymouth Fury is the star of the movie "Christine". Nothing in movie history can compare to one of the scariest automobile`s to ever kill and maim on the big screen. I know what you may be thinking... C'mon, "The Car" can't even touch Christine! Could Stephen King have come up with a more fitting car to use, than a Plymouth Fury? Fury means to be angry, intense, violent. How perfect!

I am going to omit the details of what exactly happens (for those who have not seen the movie). The car Christine, comes to be it`s evil self on the assembly line in 1957 as a 1958 model Plymouth Fury sport. She came equipped with a 350 c.i. Golden Commando engine, This engine was a powerhouse for the time. With dual 4 barrel carburetors, dual exhaust and backed up to a heavy-duty Torqueflite automatic 3 speed transmission. Lets just say that this car could lay down some major rubber for such a large vehicle.

Christine was originally purchased by Roland Lebay in 1957. Due to Roland's death, his brother George is left with the burden of trying to sell this monster. Luckily, George is approached by a young nerd named Arnie Cunningham. Arnie want`s to buy the car and fix it up. During the process of fixing Christine, there begins an evil obsession between Arnie and Christine.

Anyone who wishes harm upon Arnie, like Buddy Repperton and his gang, will pay with there life. Like being crushed to death or run over buy a burning Christine. I love when Christine wants to punish people. First the windows go black and then the 4 headlight`s blaze like hell`s fury (forgive the pun).

During the shooting for this movie they had around 26 cars, 16 were used, 8 were for parts. the cars used were mostly Plymouth Savoys and Belvederes, of the 26 cars used, 3 cars have survived and the rest are scrap.

Anyone who has seen the movie has to admit that one of the most awesome scenes happened when Arnie found his car after Repperton and his gang destroyed it inside Darnell's garage.......... So Arnie shows up at Darnell's garage after hours and finds out his car is demolished right down to the engines air cleaners being crushed. He is totally distraught. He begins to walk away and hears metal un-wrinkling and looks back at the car to see the engine is in perfect shape. He then stands there with a smile on his face and says "okay show me". Headlights blaze and Christine begins the transformation back to new and beautiful. I love this scene! Check it out below.

Enough about the movie, lets get down to the 1/18 scale die-cast Christine I have in front of me. 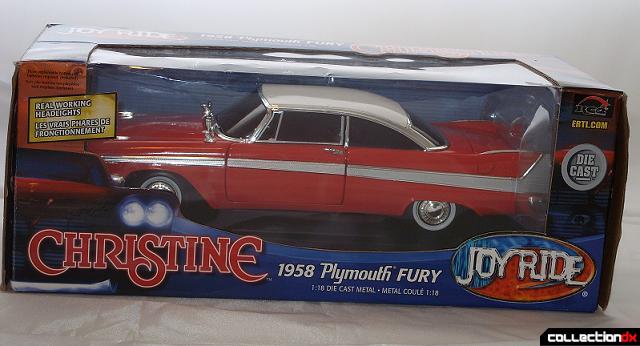 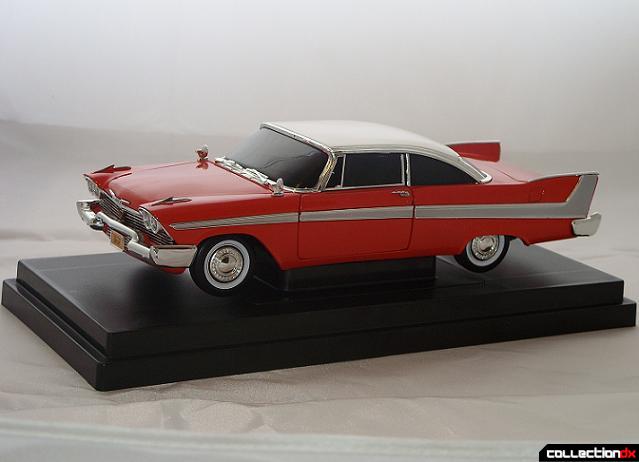 Christine is manufactured by Ertl, and made out of die cast metal, plastic, PVC, and synthetic rubber. Christine Weighs in at a hefty 2.9 lbs! Man, this car is heavy and very well built! 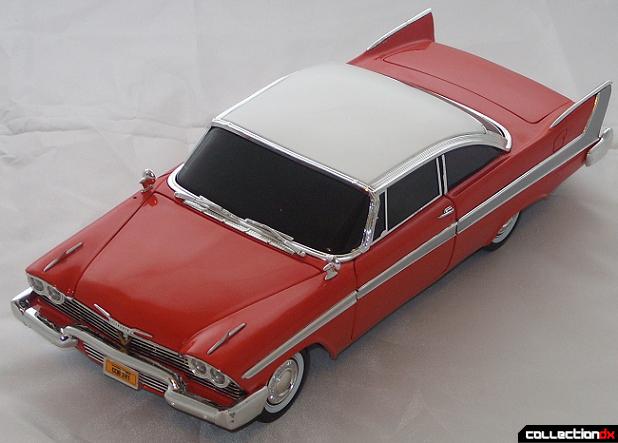 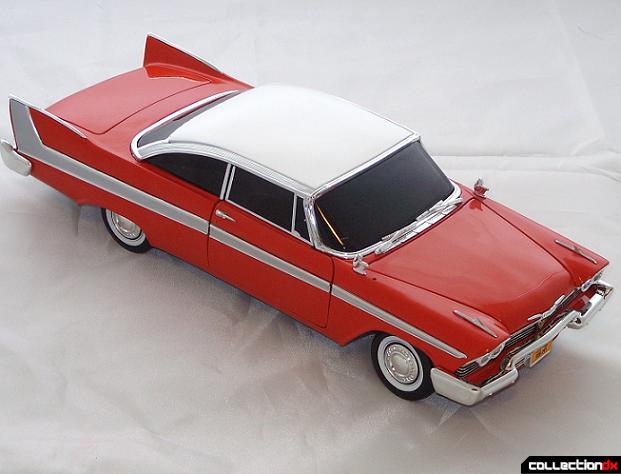 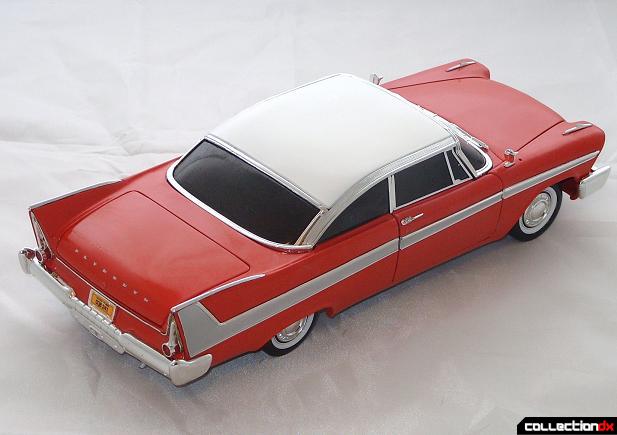 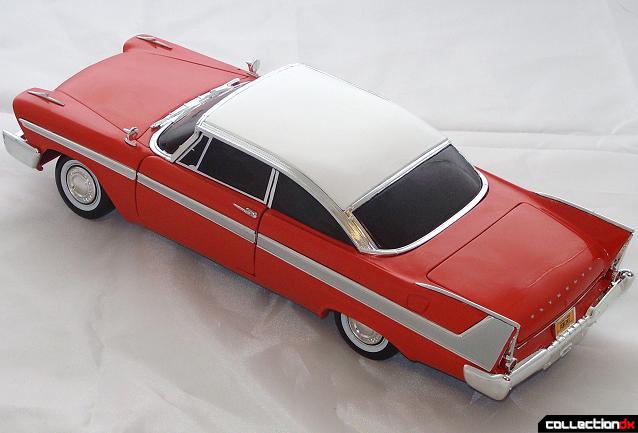 Christine is highly detailed and loaded with features like the blacked-out windows the car gets in evil mode. Other features are an opening hood that reveals the 350 golden commando engine in high detail, opening doors, allowing viewing of the detailed interior with working steering and moving bench seat. Also, the trunk opens up to show a spare tire and accurate trunk lining (sorry, not shown in pics). 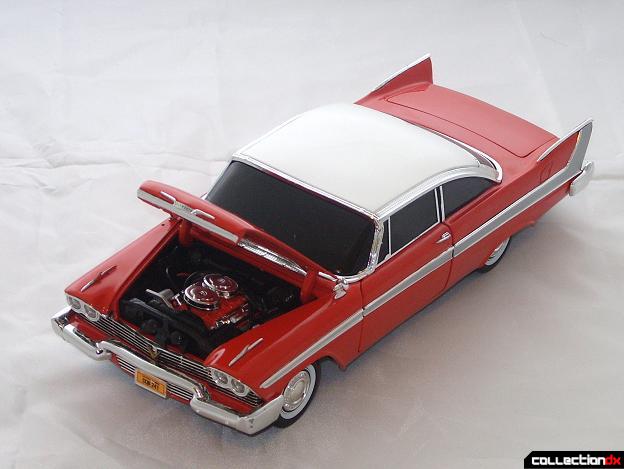 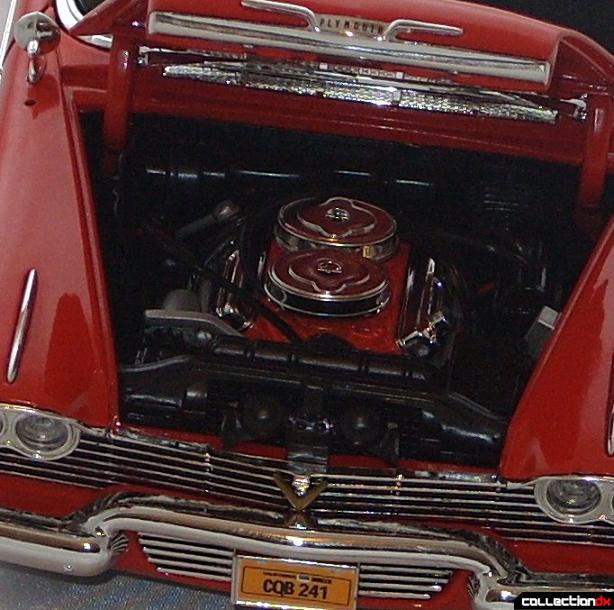 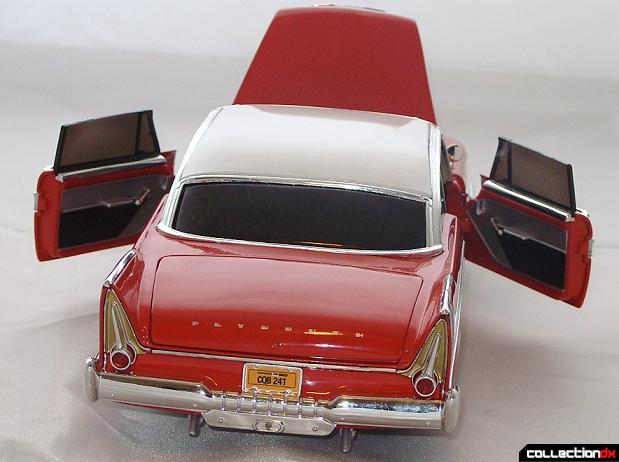 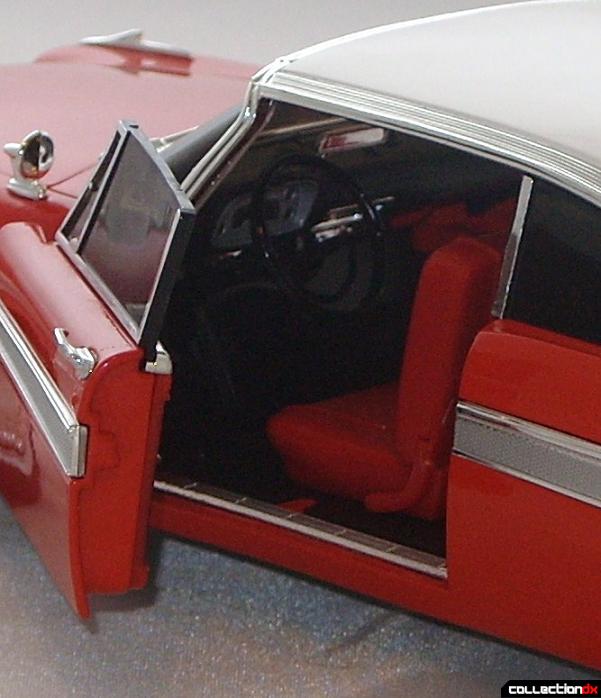 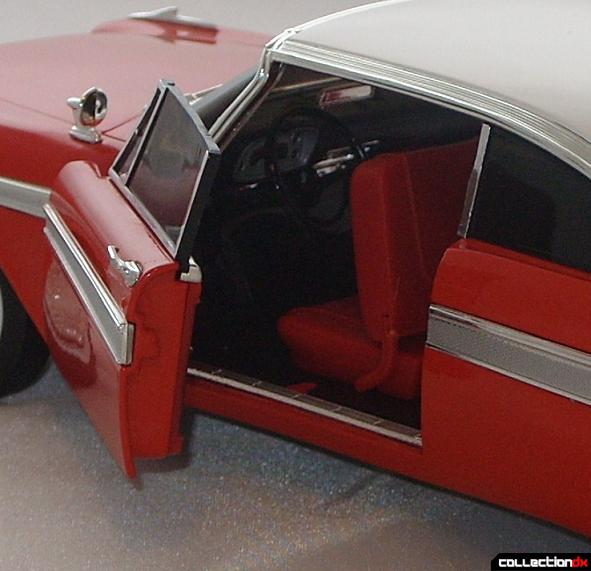 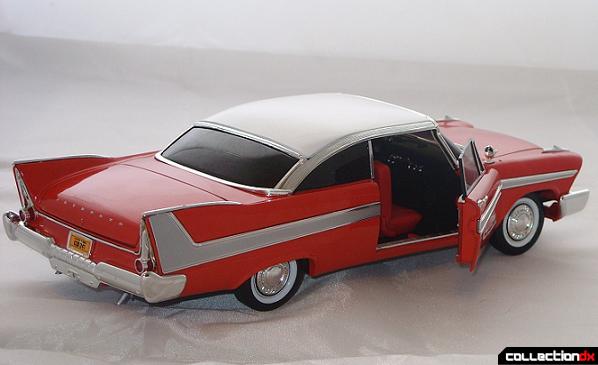 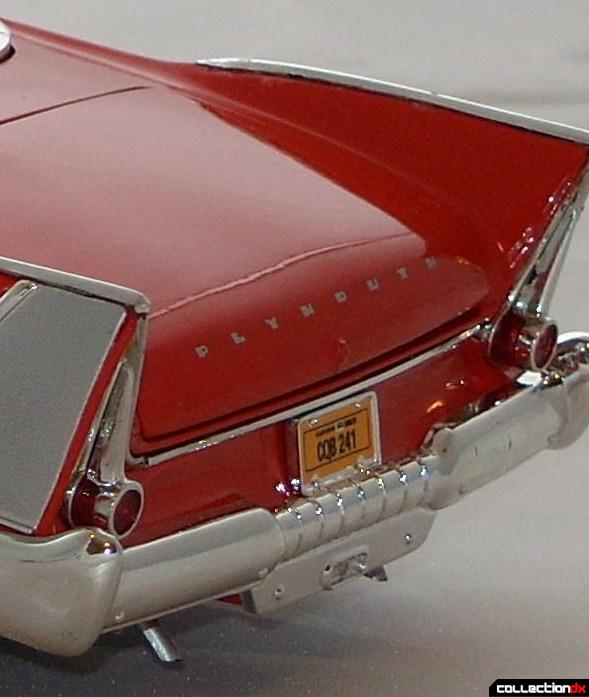 This car looks great from any angle, even the undercarriage is very accurate. 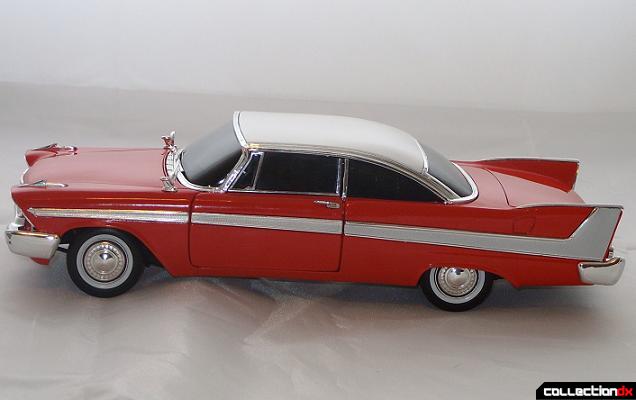 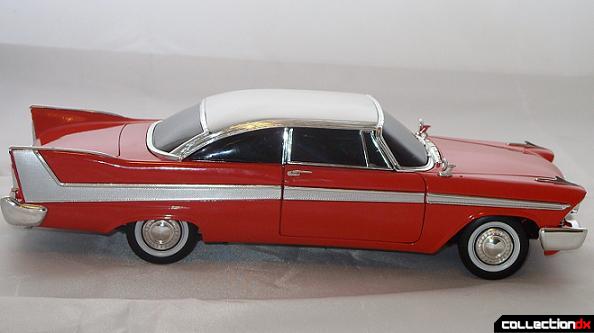 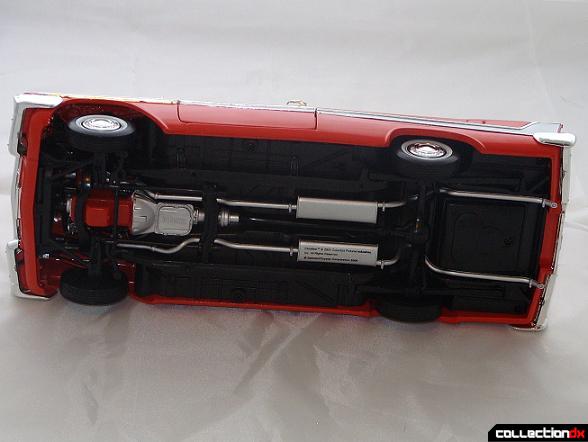 Last but not least the headlights light up and look sick!!! 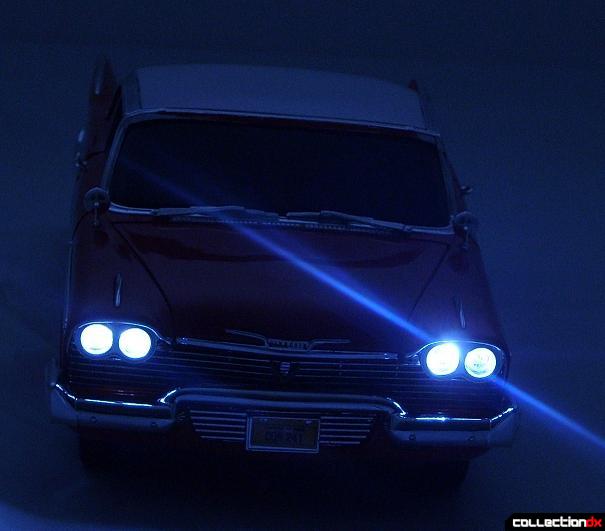 So, in conclusion, Anyone who loves the movie Christine, or is a gear head should really have this car. Trust me, It really makes a great addition to any collection. Just picture Christine next to a Takara 1/18 Strikedog. Who would you bet on?

6 comments posted
And now for something completely different..

Great review and very unique! I had no idea that they made this. I don't collect cars at all, but as a longtime horror and Stephen King fan, I can really see the appeal of having one of these. Thanks for posting it!

Awesome review, as a muscle car enthusiast I really dig this! Just not to big on horror films.

Why do you have that avatar?!

Good question, in answer I happen to be a fan of Ridley Scott films, namely Blade Runner & Alien. My avatar is of a model that I spent long hours to complete. Also it's one of my last undertakings in the realm of model kit building. The alien films are one of my few exceptions when it comes to sci-fi/horror, note "sci-fi". I don't watch or enjoy outright horror (i.e. movies with supernatural/demonic themes) as there is nothing upbuilding or "fun" about films that disturb & drain you mentally.

Excellent review. I love diecasts in 1/18 scale so much. This car is simply awesome.