The Fewture Getter Series has been the most exciting modernization of the classics I have ever seen. They inspired me to change my collection, increase my price range of purchases, basically now I go for quality, not quantity...imagine my dismay of this tale of worry, woe, and weirdness involving the company that led the revolution. 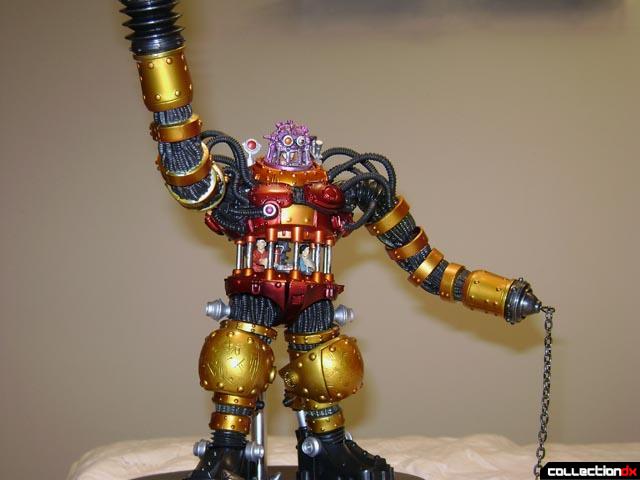 I bought a silver version of Boss Borot awhile ago, very little die-cast, kind of ugly, so I sold it, with the intent to never see again until...one day on eBay I saw the color version for half price so I bought to "round" out my collection. It was shipped fast and I took the sealed Fewture shipping box and put it away. Come almost half of year later I opened to do this review and display. I cut the tape, undid the bag on the Fewture box, and opened for the first time. Here is where it gets weird, wild, and worrisome. When I looked at the robot in the tray, nothing, I repeat, nothing was damaged about the packing materials...HOWEVER...every piece of chromed or silver metal was oxidized... otherwise known as rust! 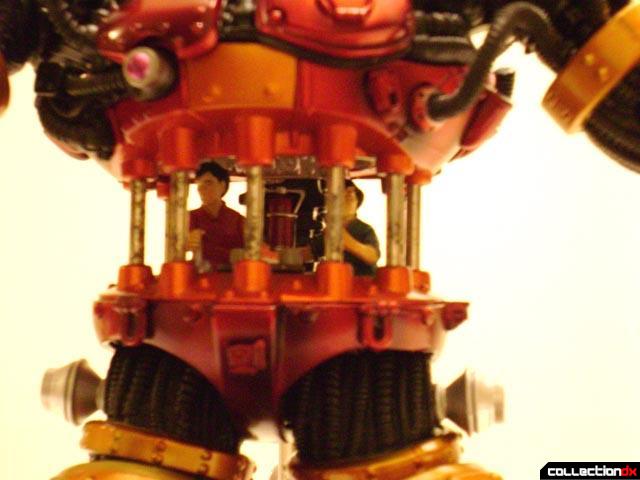 Think of this review as a warning, OPEN your robot boxes even if they are factory sealed...not the trays per-se, but at least look at it. Of course I got paranoid, crazy, Freaked Out!!!...and checked the rest of my untouched collection ( I have some displayed some stored because of space)...sigh...thank God they were perfect and I made sure I when I repackaged them, that any plastic bags have some movement/space and no "new" major temperature change in their future....only thing I could think of that caused the mace, the chest, the pins in the claws, and the silver screws to be rusty was sealed bags with extreme temperature change. Also, for the x-file that is this robot a leg nut was missing...yes in a factory sealed box...maybe it was repackaged...that is just too paranoid:( 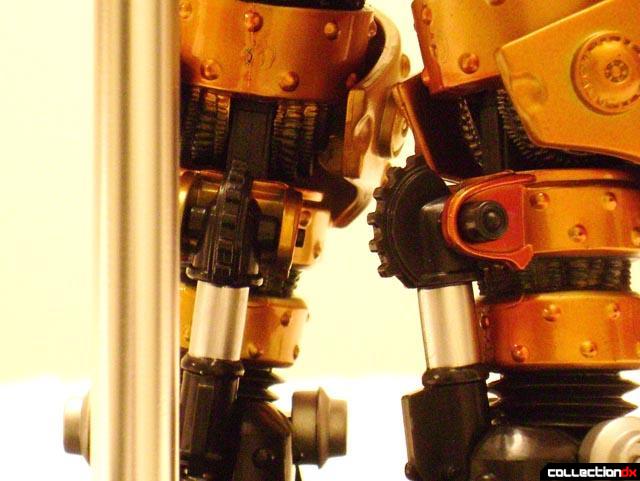 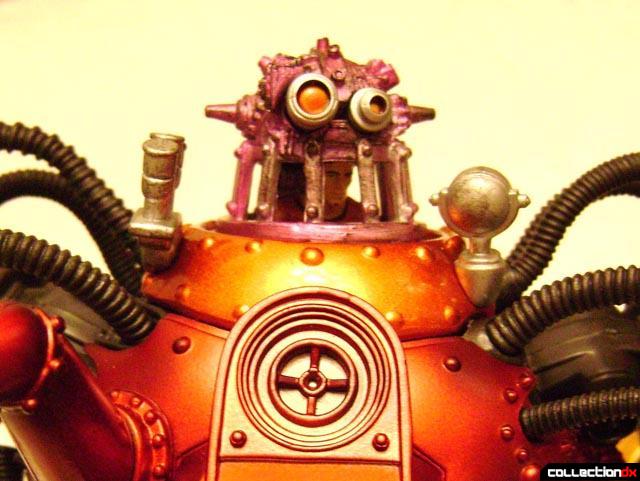 It came out pretty good and silver poles instead of chrome matches the plastic silver parts...so now that drama is over I can get to the review... 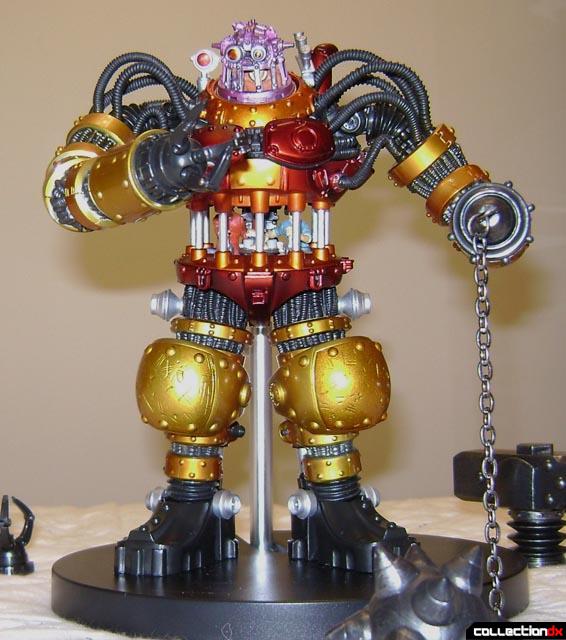 I can see why this robot has been collecting dust on sellers shelves and even now Angloz.com has Boss Borot for 50% off what was originally asked. I did have the Doublas (all plastic...yes it is long gone) and the same "quality" as with Boss Borot...allot of plastic, very little die-cast and poor construction. The pink head had to be adjusted to fit (and still falls off with a minor breadth) and one arm was frozen/glued at two joints...so I had to take apart unfreeze and then reassemble. Yes, I had to do a heck a lot of fixing for a brand new chogokin. 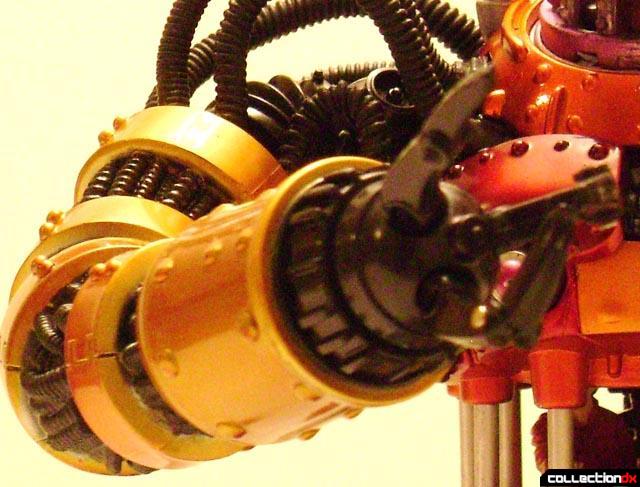 Boss Borot comes with the normal stand (does seem thinner/cheaper than the other Fewture stands I have...) two plastic claws, plastic hammer, and metal like mace (coolest part) 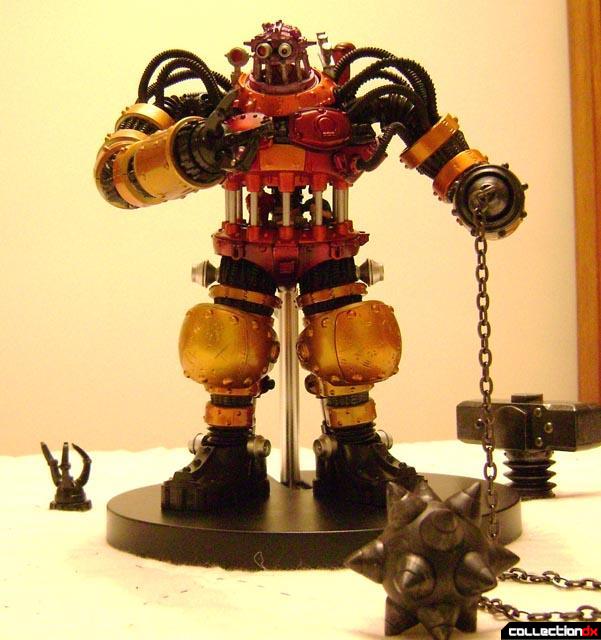 Overall the joints are stiff, Borot does not move at waist and arms legs really move more like a person drowning in the ocean than a dynamic chogokin. I admit it does looks cool, but the normal Fewture type poses are impossible. Also, the stand while screwing into the back lacks the tension and strength to hold him well. My other Fewture robots you can have them kick or fly with the stand holding them...with Boss's he just slowly flops back to a standing position (no matter how you tighten the screws this still happens) 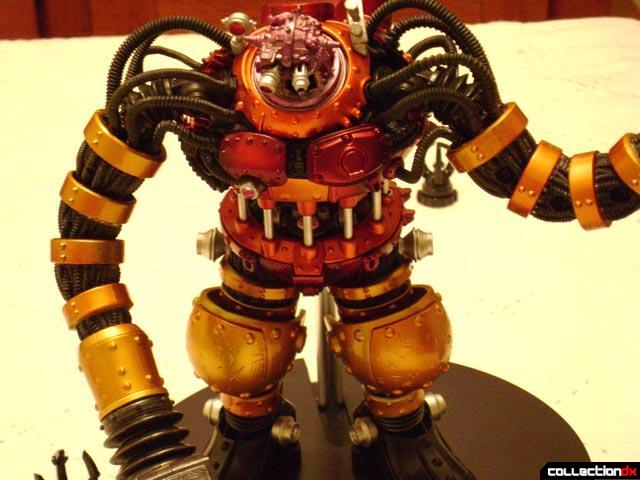 Fewture is a company that while overpriced, makes figures I truly enjoy... the size, the die cast, the poseabilty...all lead me to hope and pray that Boss Borot and Doublas are the exceptions to the rule. Even on clearance...really really think about buying, they look cool but just seem cheap. I do have to say, there is a strong possibility I am just bitter. 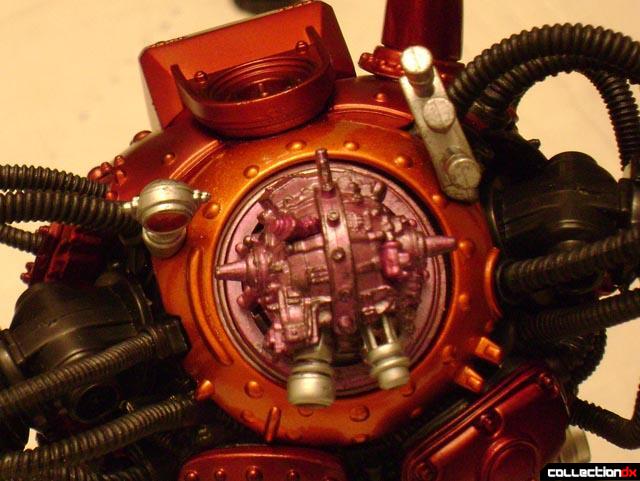 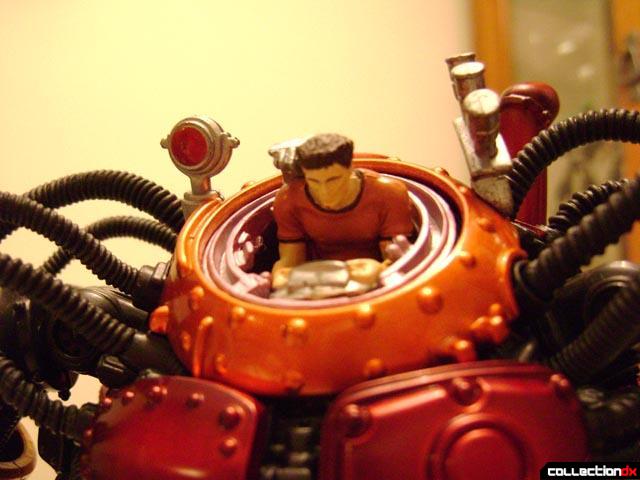 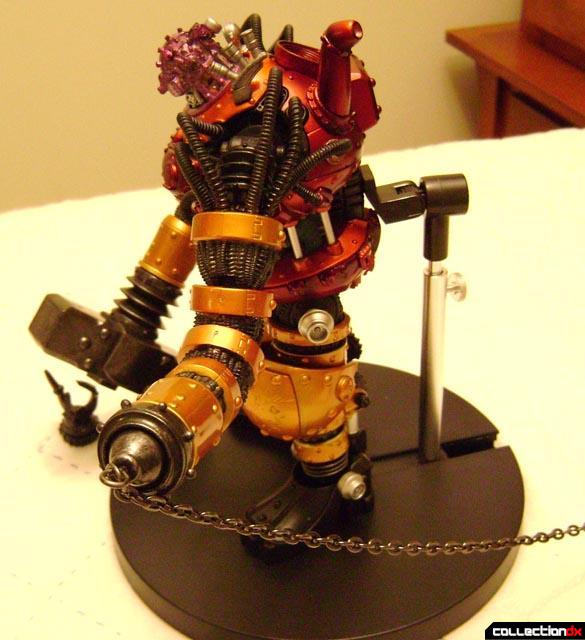 Finally, if you learn anything from this review...is even if it sacrifices some resale value...look at all figures the same day you receive, store in cool dry place, and make sure the robot is not in a sealed plastic environment in which moisture might get trapped ( I use to wrap the stored boxes in shipping plastic to protect product boxes, now I use tissue paper to keep off the dust.)

Take care, and I hope you never get a brand new, sealed robot that you have to nickname rusty???

And Yes, I will buy Fewture in the future...lets hope Gatchaman (G-Force) is not like Boss Borot!

13 comments posted
Dang...sorry to hear that

Dang...sorry to hear that story, apex3!

Crazy experience...just for a mediocre toy. Y'know, the thing that's been holding me back from getting the silver version of this guy was the pilot figures. Boss, Nuke, and Mucha look so...normal. The hell's up with THAT!?

Eh well. And now, to hear that the figure doesn't even have that much diecast in it pretty much seals the deal. :/

I agree the figures should look less Built and Narcissistic...but Doublas version of Dr.??? forgot name looked kind of the same like goth models.

The wierd thing is that having it be rusted would actually fit the design aesthetic.

Btw the cost of these Fewture toys... maybe only SHE that cost more that Fewture...

It is funny, I kind of agree that the weathering, damaged looked to the chrome bars actually equaled the look and style of the piece more...kind of like the mace's look but had to fix...was worried might keep rusting

Thanks for the review, apex3. After I read your review, I opened my boss borot. Same thing happens to me, so sad. Does this happen to all Boss Borot that hasn't been opened for awhile? Is this the reason sellers are selling at half price now?

I bought a silver version too along time ago from big bad toy store and it was fine, so don't know...but the more I examine it the more it does not seem the same materials or quality of other fewture models, except the doublas of course....The one I got, in retrospect i noticed the brown tape of the fewture box was very dark brown like it had been exposed to extreme heat...which would o nothing to a normally vented box, but fewture puts a baggie over the black box and then sealed baggies around the rorbot...I did contact the site that sold me it and they said they bought from a warehouse that had a huge amount sitting around...hope that helps...you going to leave "weathering look" or paint like I did.

Thanks for your explanation mate. I just contacted the site that I bought this from, hopefully they can do something about this. Actually I am a MIB collector, all my collections are still sealed. I opened this only after I read your review, and I was very sad when I saw the rust, :(. Most likely I will leave it like it is, since it's back on the box again now. Even better, if I can get a full refund from the seller, hehehe. By the way, I wish I have the skill like you to fix this. I have no idea, how to fix this. Thanks again man

Just want to give an update regarding boss borot's problem. Here is the reply from my seller:

"As all these are the stock which stored in the warehouse for some years. The metal rods get rust even the box is completely sealed. We have the information from supplier that this happen to all merchandise, and they have reported to Japan but got no further reply. We are sorry for such problem."

I think, this problem is the reason the sellers are selling cheap now

That is the exact comment I got...who did you buy from, also I have to say, even sealed, unless mositure gets involved I don't know how this can happen...does some one on Collection DX...know...I would love a scientific explanation...science is not my forte'

I think the seller has prepared the same format to answer this problem, LOL. Yes I have no idea as well how this thing can happen, but i guess it has something to do with heat, moisture and metal, hehehehe

This look makes it feel like it was constructed from parts found in a junkyard. And somehow, it suits it more.

Okay, Let me get one thing clear, I LOVE the EX Getters. they are mechanized, Dynamic, and Getter 3 could actually sit next to the Aoshima Shin Getters and look like its getter 3....or at least in my eyes anyway...

but THIS?! Dear God, this is what happens when you have the guy who designed the Michael Bay Transformers do Super Robots...Boss was cartoony, Expressive, and had a look of "Designed on a small budget"

But this Abomination looks like it came out of a Bad CG Movie. gone is the Cartoony Joy of the Lethal Joke of Borot, and instead we get this hollow monstrosity that looks more "KILL....ME...." than it does any sort of Jollity or False-Threat.

and the Rusted Metal cements the hatred I have for this....THING.