Since the 2100s, PHASed Energy Rectifiers, or PHASERs, have become standard-issue defensive weapons aboard all Starfleet facilities and starships. Phasers vary widely in size and scale- from small hand-held pistol units to large retractable turrets located on the hulls of starbases, starships, and specially-equipped shuttlecraft. They fire concentrated & focused bursts of rapid nadions, which are easily and safely stored. On warp-capable starships, though, phasers become useless because the rapid nadions still travel at slower-than-light speeds, rendering them useless; a weakness which is countered with the use of antimatter-powered photon torpedoes. However, if not carefully regulated by the user, phasers can quickly overload their power cells due to improper discharging and explode.
By the late 2300s, it was possible to field smaller palm-sized Type-1 phasers which could be more discreetly used. However, these were limited in operation, and so were designed to connect to the larger pistol-sized unit to collectively form the standard Type-2 phaser, which was more versatile in setting such as beam intensity & dispersion width, energy cell capacity, and a wider variety of uses beyond simple self-defense.

(Star Trek trivia: Though seen many times in the series, the Type-1 Phaser was never shown on-camera being connected to, or removed from, the larger Type-2 unit!)

Though the Phaser prop’s design changed very little through the course of the three-year TV series, there were three distinct coloring variations seen, each of which has been recreated by Diamond Select Toys: black body with White Handle, the bluish gray body with black Type-1 and Bronze Handle, and this one which has the Black Handle seen for the majority of the series. 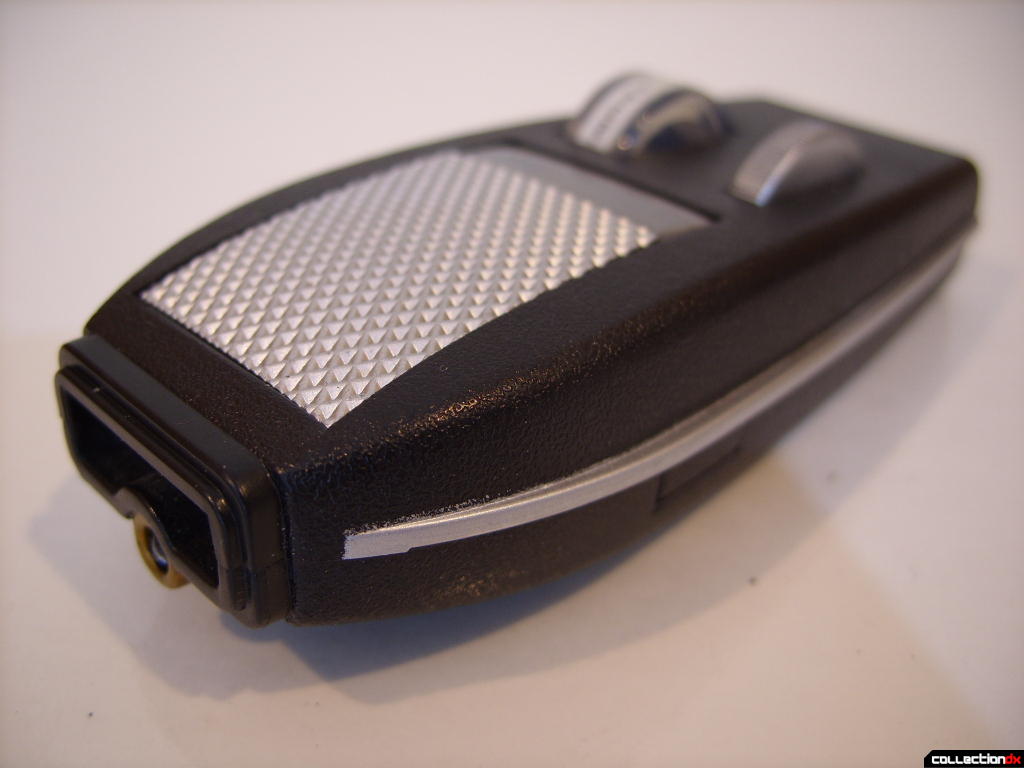 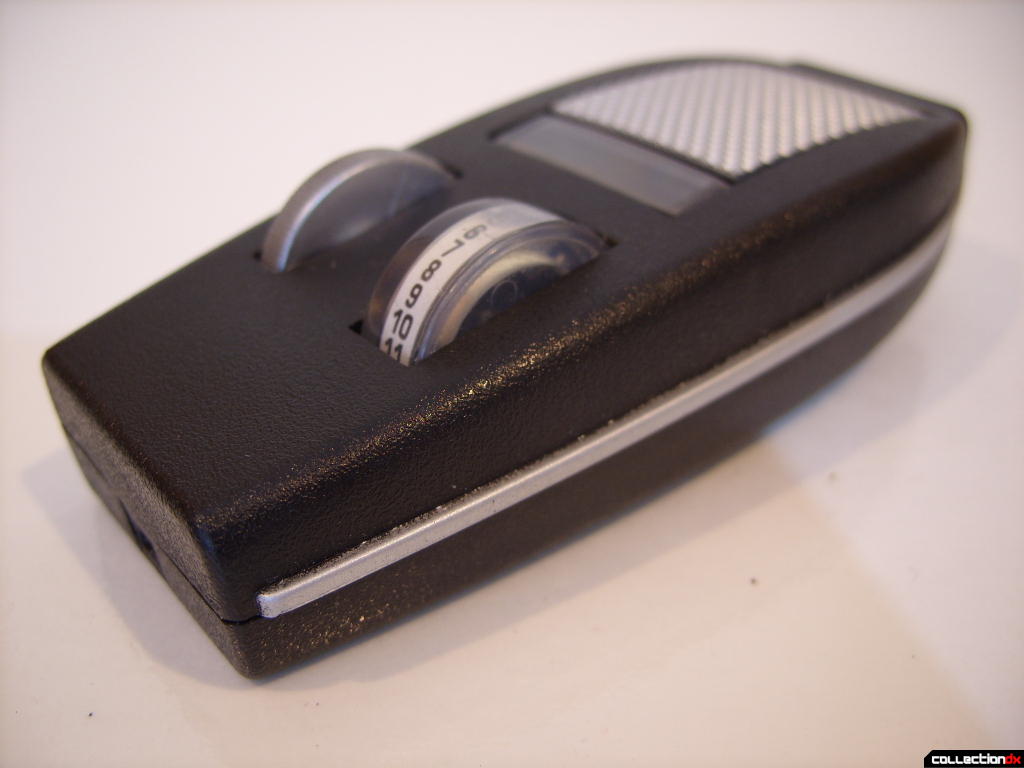 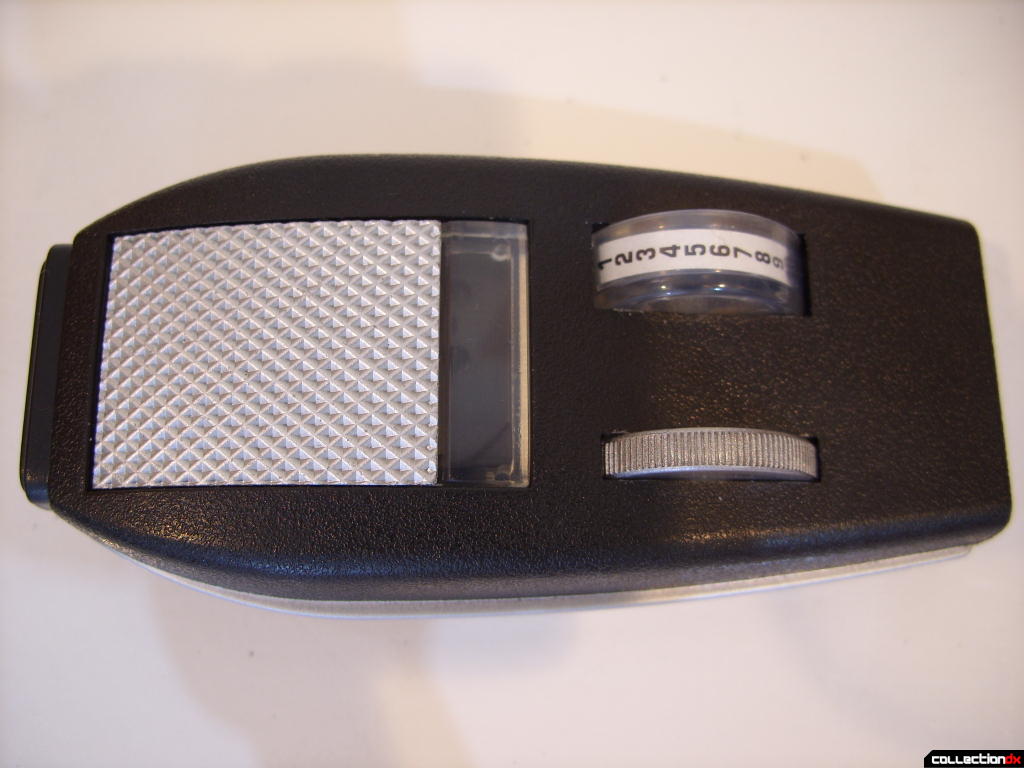 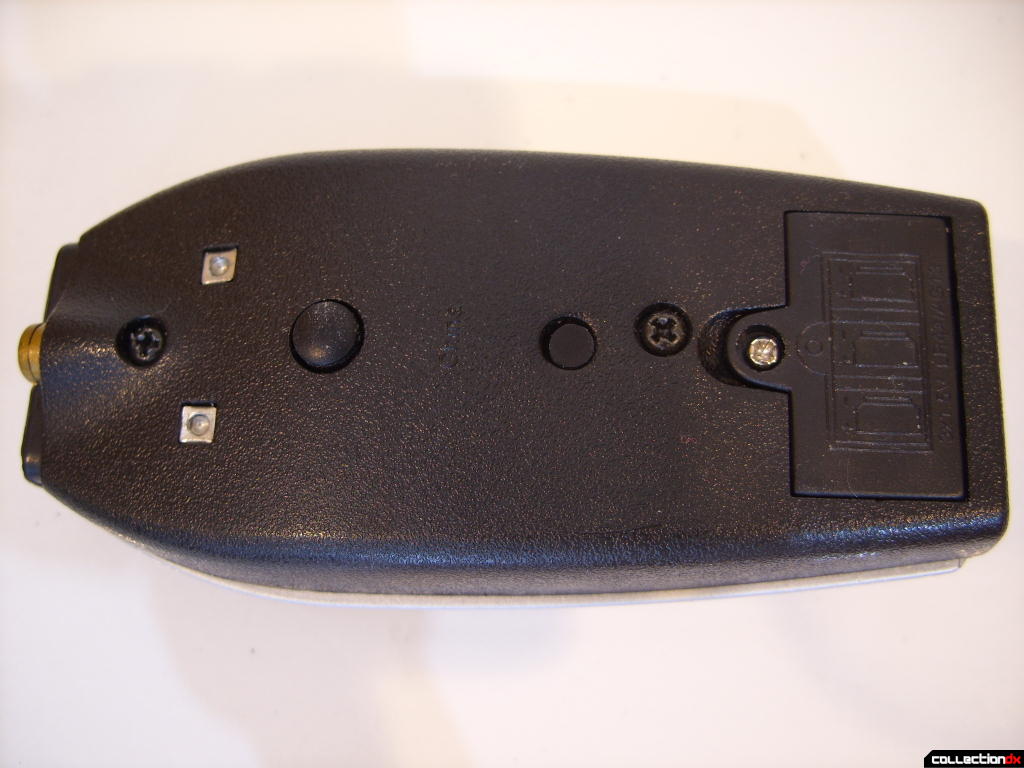 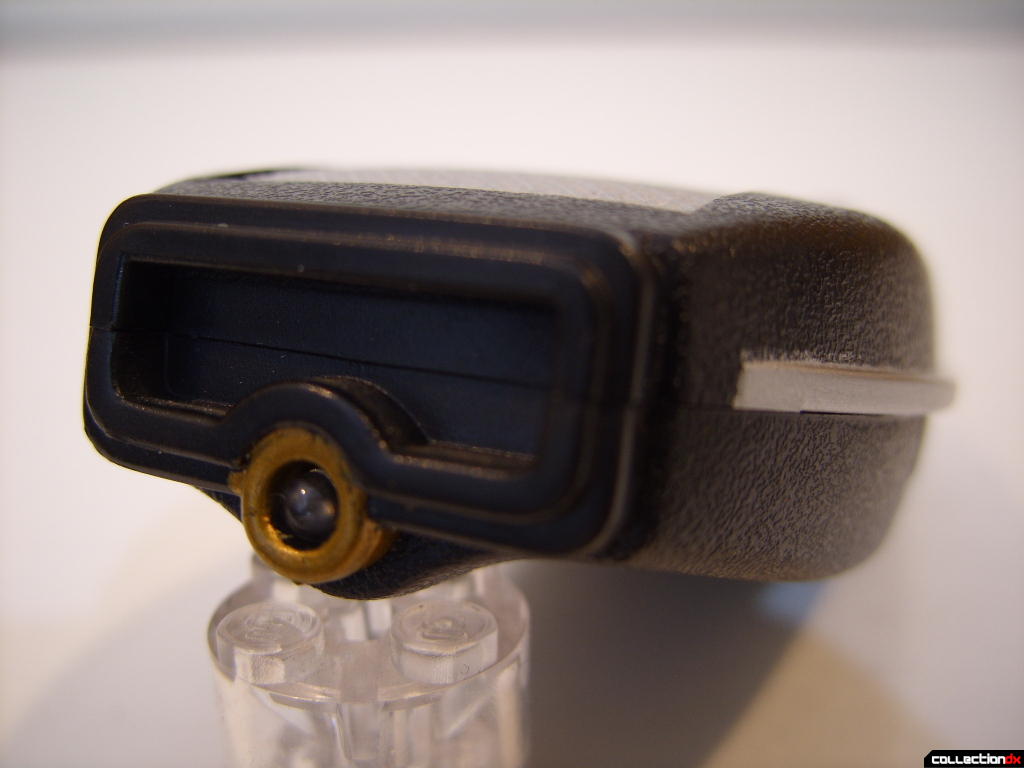 Three LLR4 batteries are required for this set, and they are placed in a compartment underneath the Type-1. The Type-2 draws its electrical power from the Type-1 via a pair of metal prongs, so it does not need batteries as well.

A targeting display can be raised on top when the left wheel is spun forward. The display itself, while transparent, has no graphic information on it. 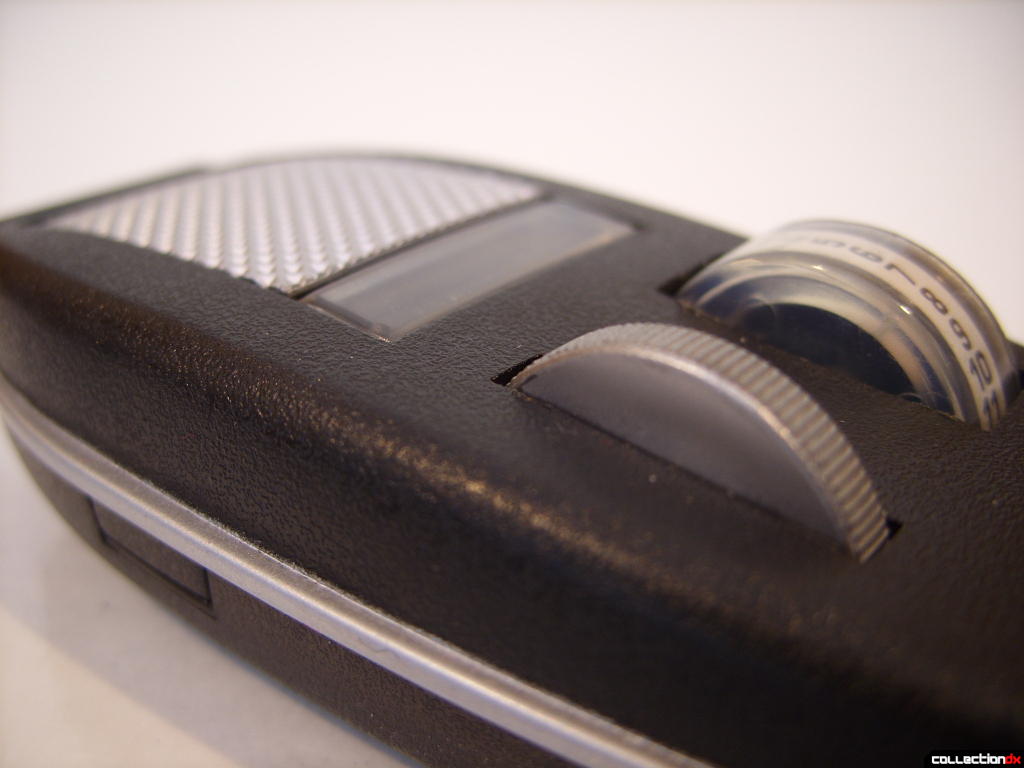 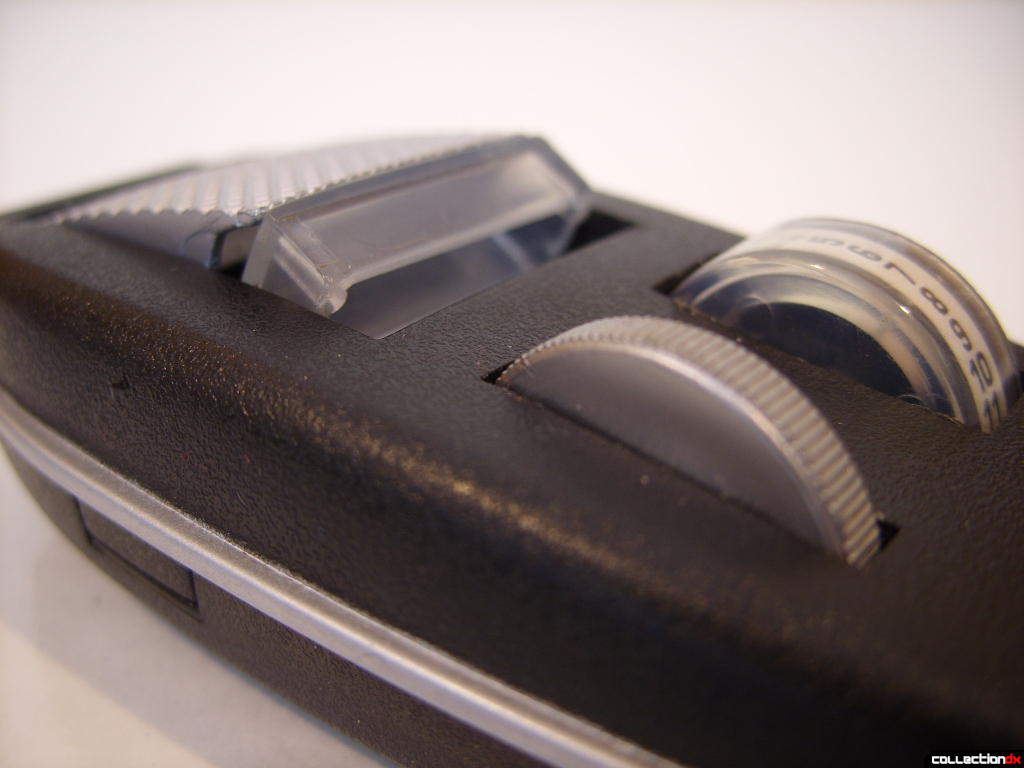 The trigger to activate the light and sound effects is a small rubber button underneath. 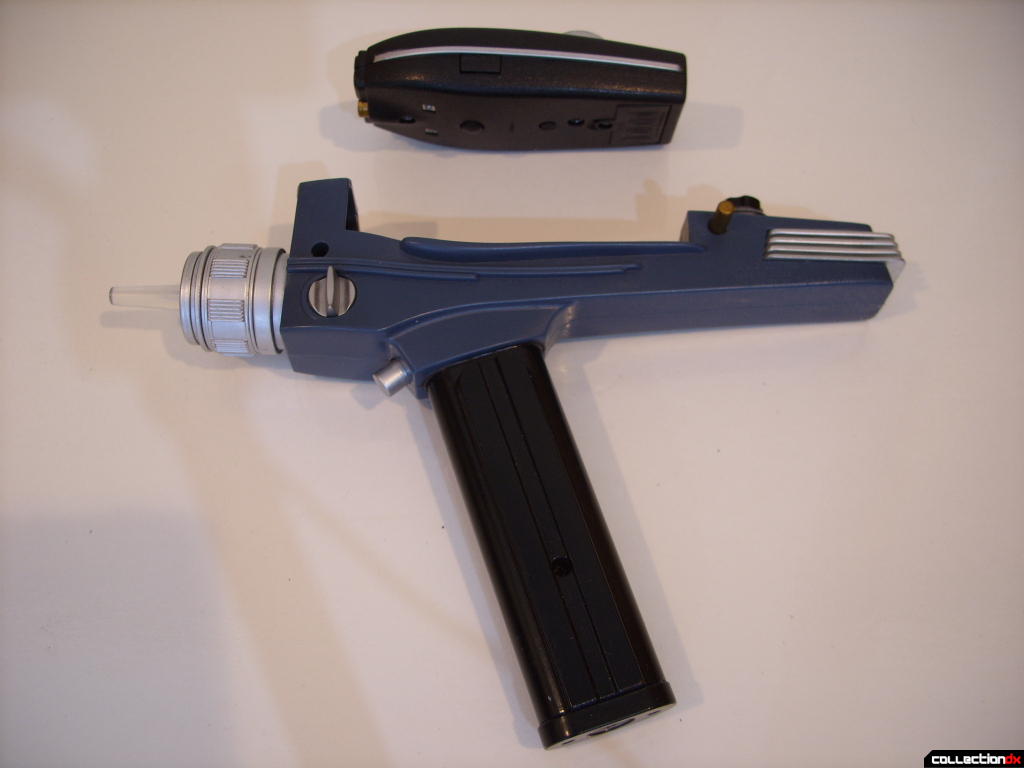 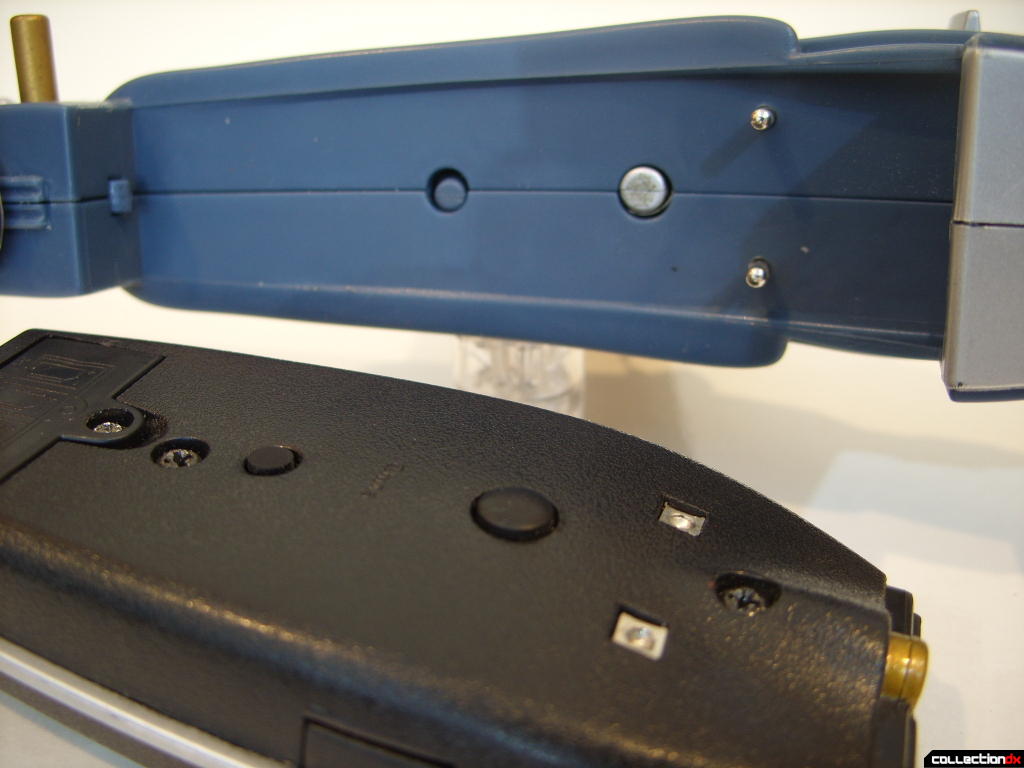 As in the series, the Type-2 does not function as a stand-alone unit, and requires the Type-1 to be attached in order to work; this applies to this replica as well. 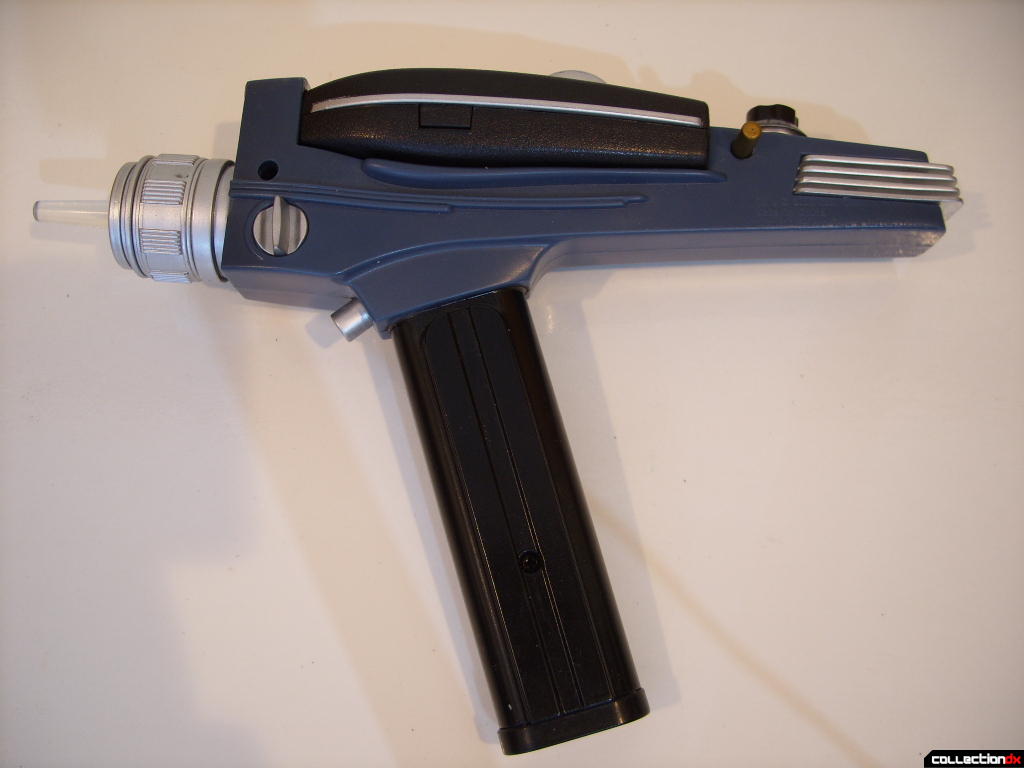 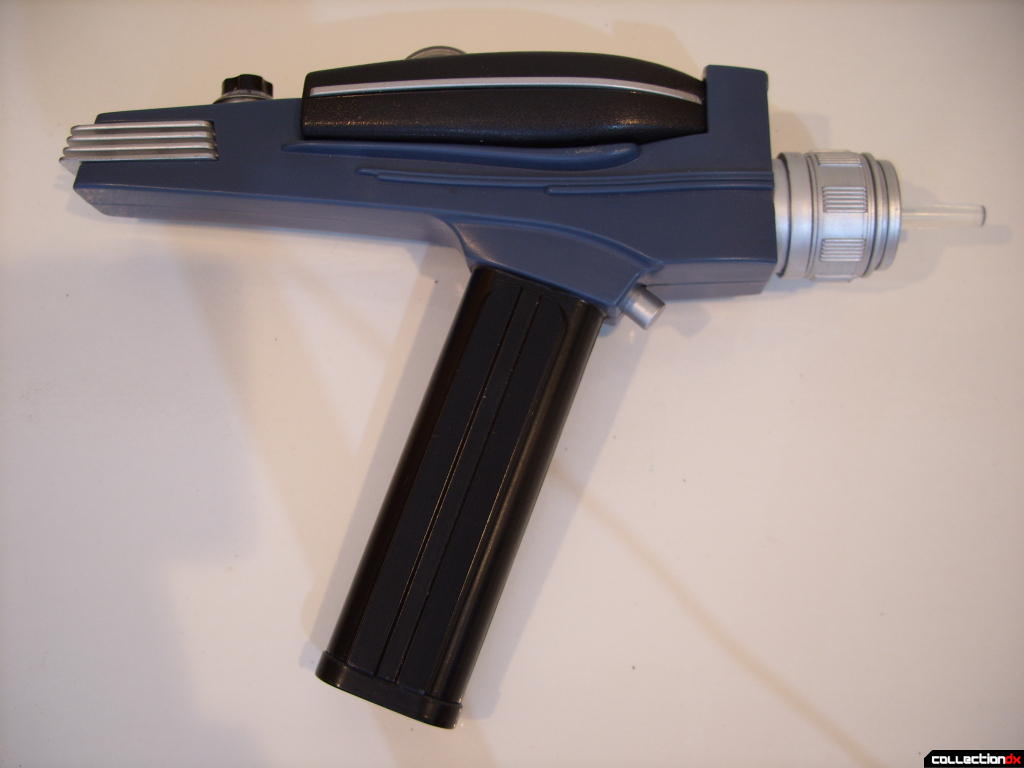 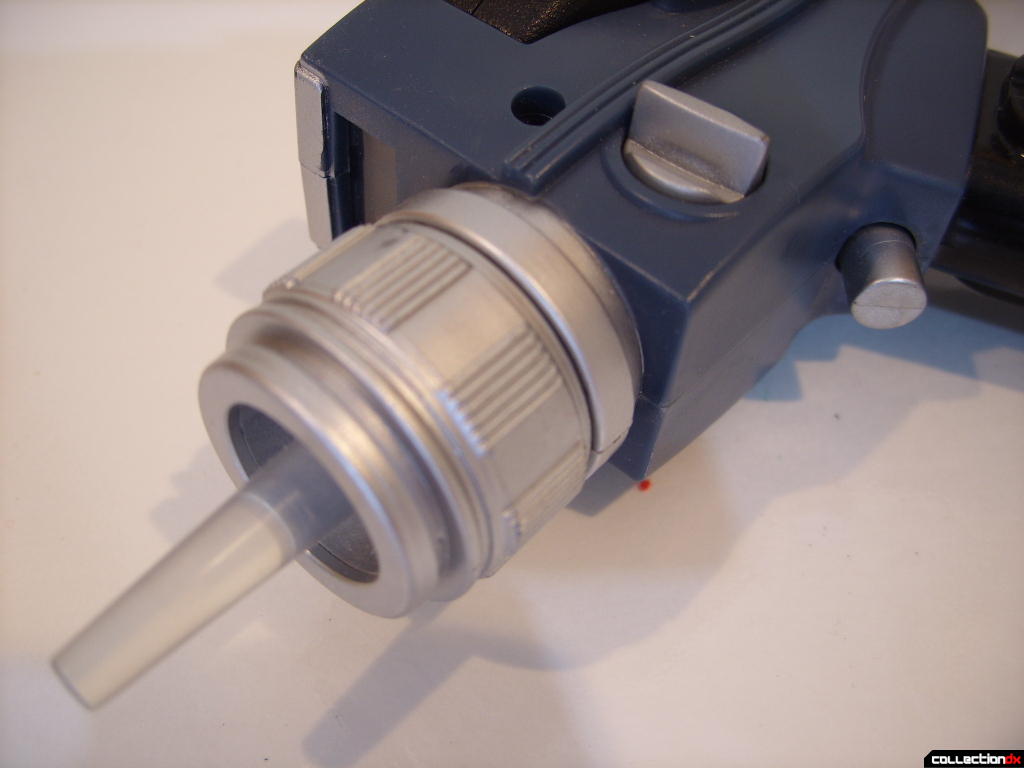 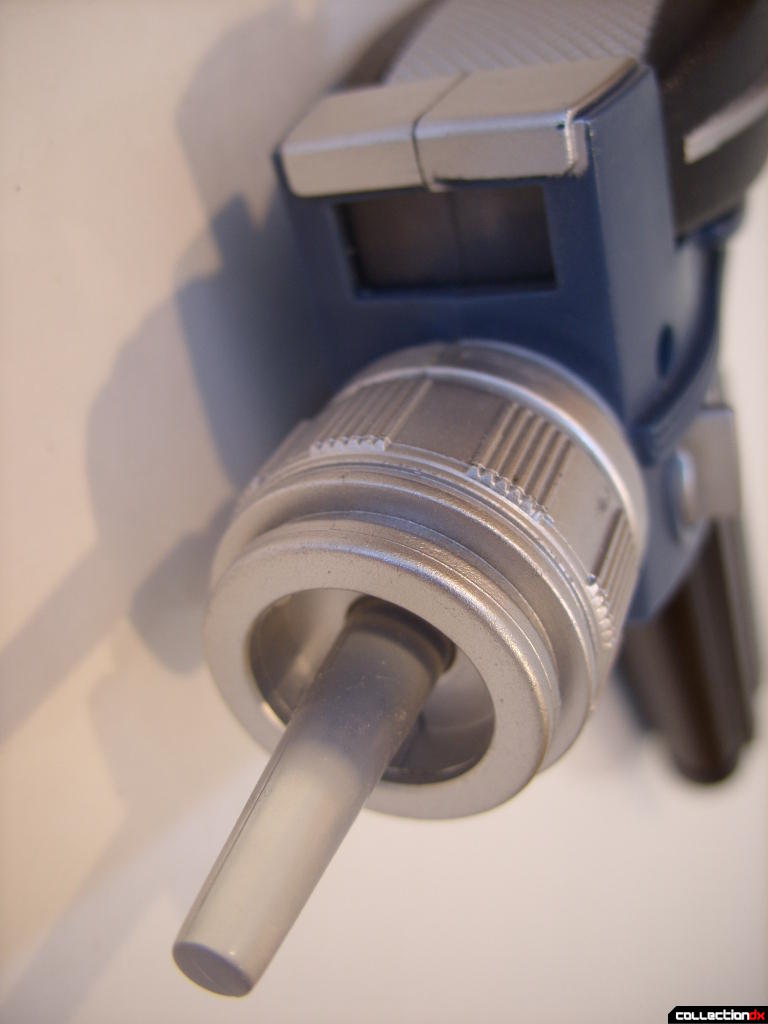 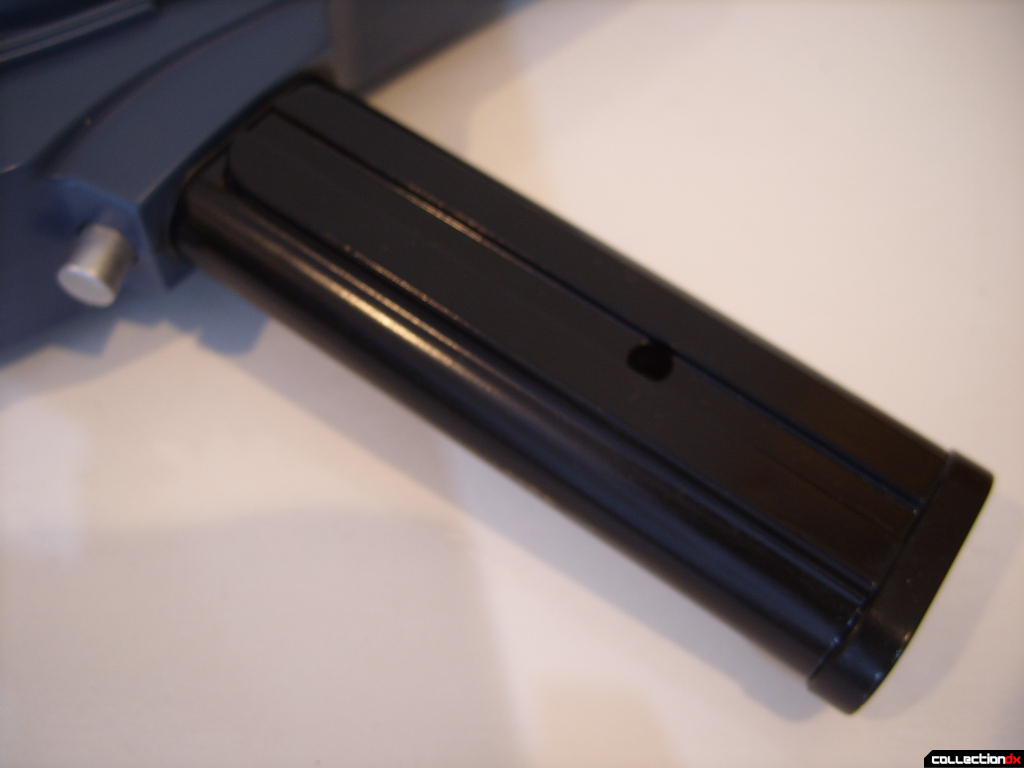 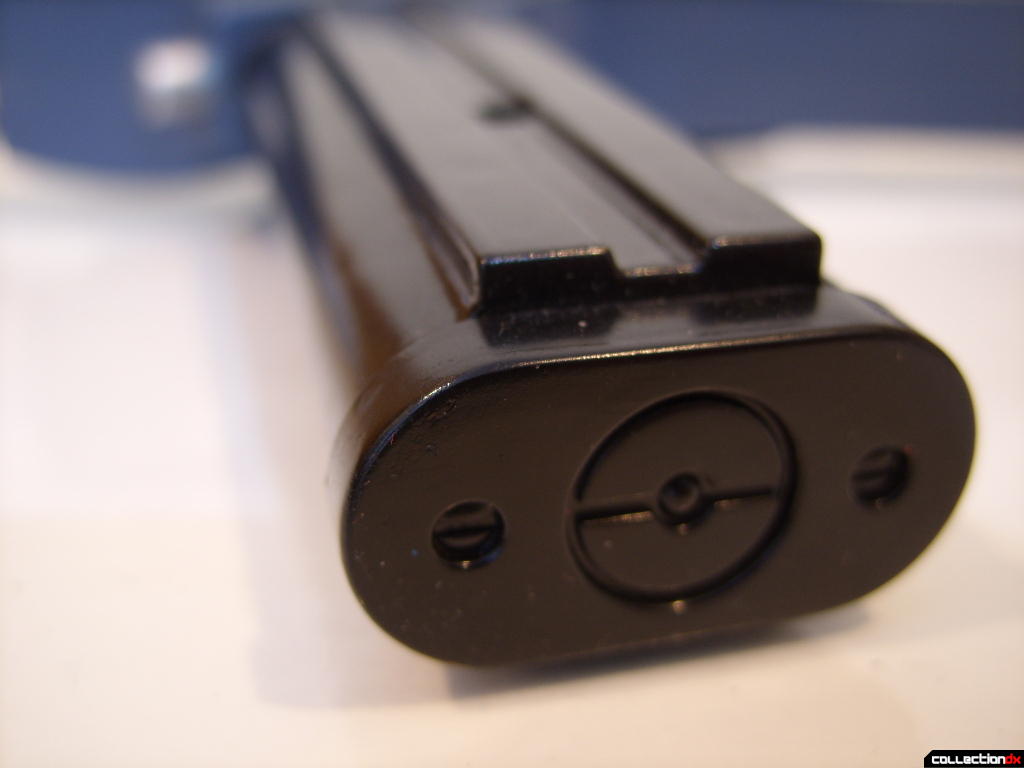 The small targeting display is typically not raised when the two units are merged.

The trigger is a small silver stub. 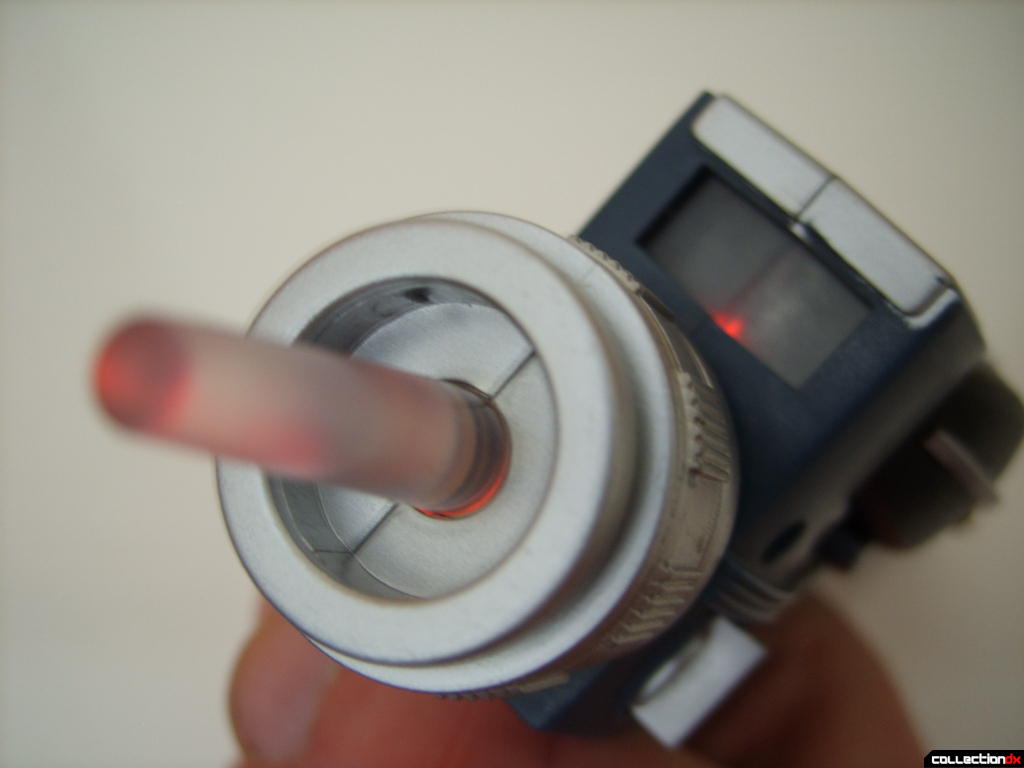 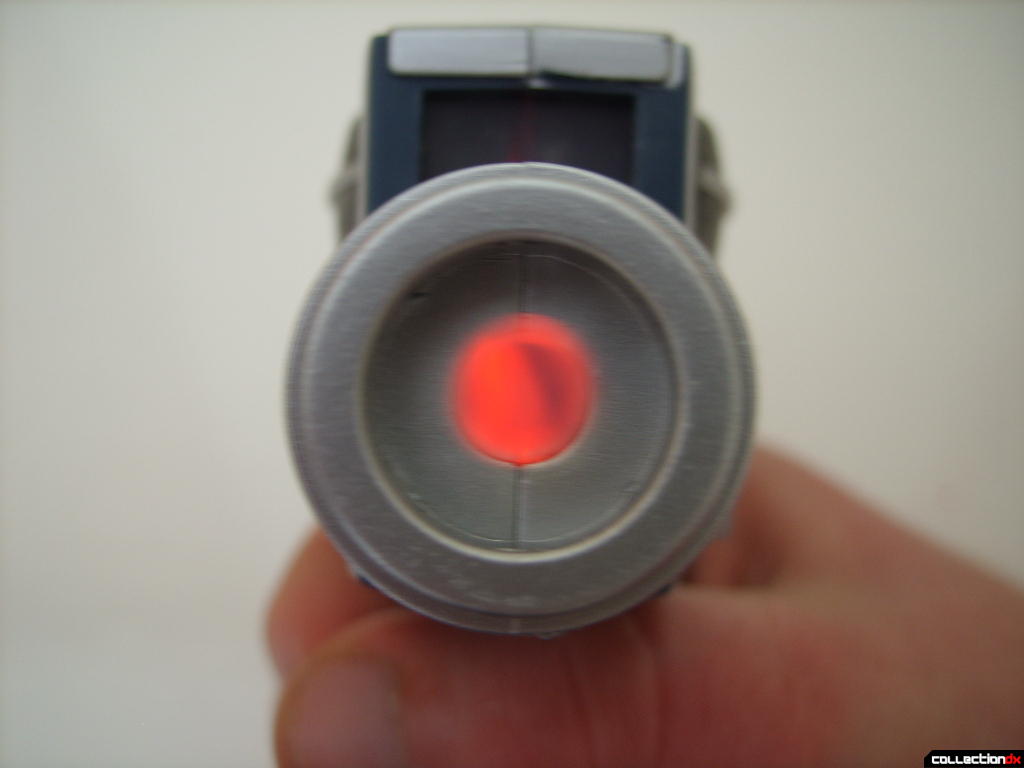 Aside from the two triggers on both Phaser units and the release pin, there are four other controls that have unique effect on the toy. 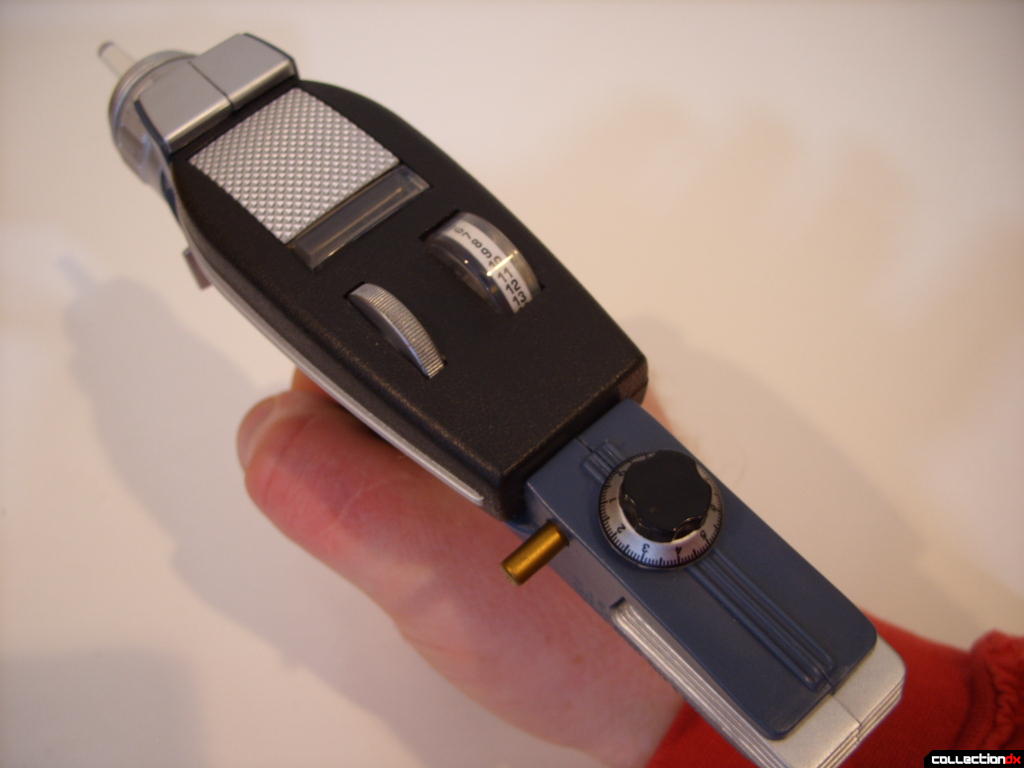 The Force Setting dial serves as the On/Off switch. Though numbers 1-20 are listed on the dial, it can only ratchet into five positions, with four of those having a different sound/lighting effect when the trigger is squeezed: Off, Stun, Kill, Torch, and Vaporize. (Easy way to tell them apart is the pitch of the sound increases with each higher setting.)

The Beam Frequency cylinder can be rotated either direction. This will make the light inside the Type-2’s beam emitter dim or brighten to your preference.

For tactical purposes, any Phaser can also be intentionally set to overload its power cells, which will explode if not corrected within a few seconds. The Power Settings dial accomplishes this. When rotated clock-wise, and the trigger is pulled, the Type-2 will emit an energy build-up sound while the LED in both units flash with increasing frequency. This effect concludes with an explosion sound effect.
(Because the speaker is located in the Type-1, it is possible to force it to ‘overload’ as well by pressing both rubber buttons underneath, although the Type-2 does this officially with pins inside the top of the holding compartment which are tied directly to the trigger and Power Settings dial.)

Wow, my first genuine raygun. Not a ‘blaster’ or a ‘laser pistol’ or other generic hand-held energy gun (although I do have a few of those), but a true representation of a classic raygun design from before I was born, but which served to influence life as I know it decades after its debut. Additionally, it’s not from a kid’s show- while “Star Trek” as an action-adventure TV series appealed to a broad audience, considering the make-up of the majority of my collection, this comes from a much more “mature” (some would debate this) background than I usually follow. The biggest reason I got this replica is because I wanted to complete the trifecta of owning it, a Communicator, and a Tricorder since those were the three most-frequently seen and used props in the TV show. I’d call that Mission Successful! 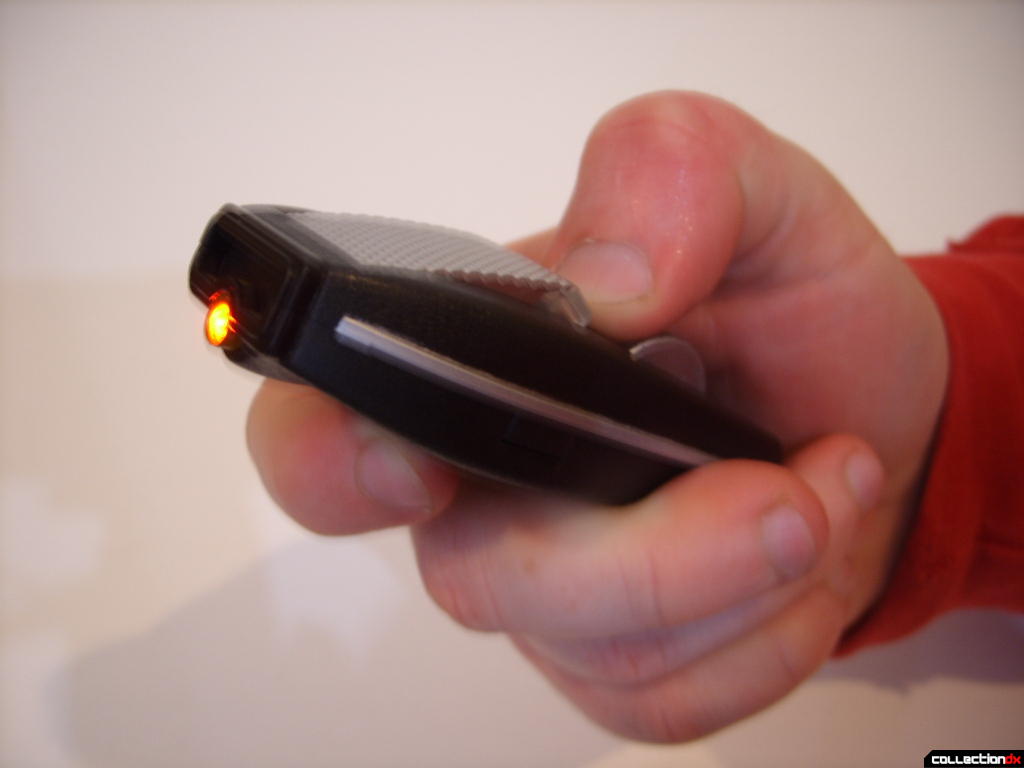 The aesthetic of the weapon- like the majority of earlier Starfleet technology (or “United Earth Space Probe Agency” for the most stringent of Trekkie purists)- is all about function before form, so it’s not a forgiving design even if it is effective. What perhaps best illustrates this is the grip and trigger, which are not comfortable to hang on to. I feel philosophical in saying that it was intentionally made by original series’ prop designer Wah Chang to be uncomfortable in the hands of a Starfleet officer because fighting is always the last resort of any situation, and it should not ever feel comfortable in your hands.
Next to my HD-Edition U.S.S. Enterprise, this Diamond Select Toys’ replica is also something of a lame duck in two ways. First, the light coming out of the Type-2 is pitifully weak even though the smaller Type-1 is a brilliant red LED! And either because of Reason #1 or simply being faulty on its own, the small Beam Light switch on the forward-left corner has no effect whatsoever when turned to either position. I suspect something internal is not correct, but shaking the replica reveals nothing loose. In both cases, I’ve seen other copies of this specific replica on the shelves and being reviewed by others and it works then. So, [again] I suspect I got [another] one that slipped through the cracks in QC.
It’s a little tricky operating the Force Setting dial because it’s smooth; so much friction is needed to get it turning. You would think that that small targeting display on top of the Type-1 would have something in there- another LED or some sort of statistics being shown or anything! And also the little brass-colored peg that releases the Type-1 from the Type-2 has to be pulled to separate them, not pushed; the instructions weren’t very clear on that! 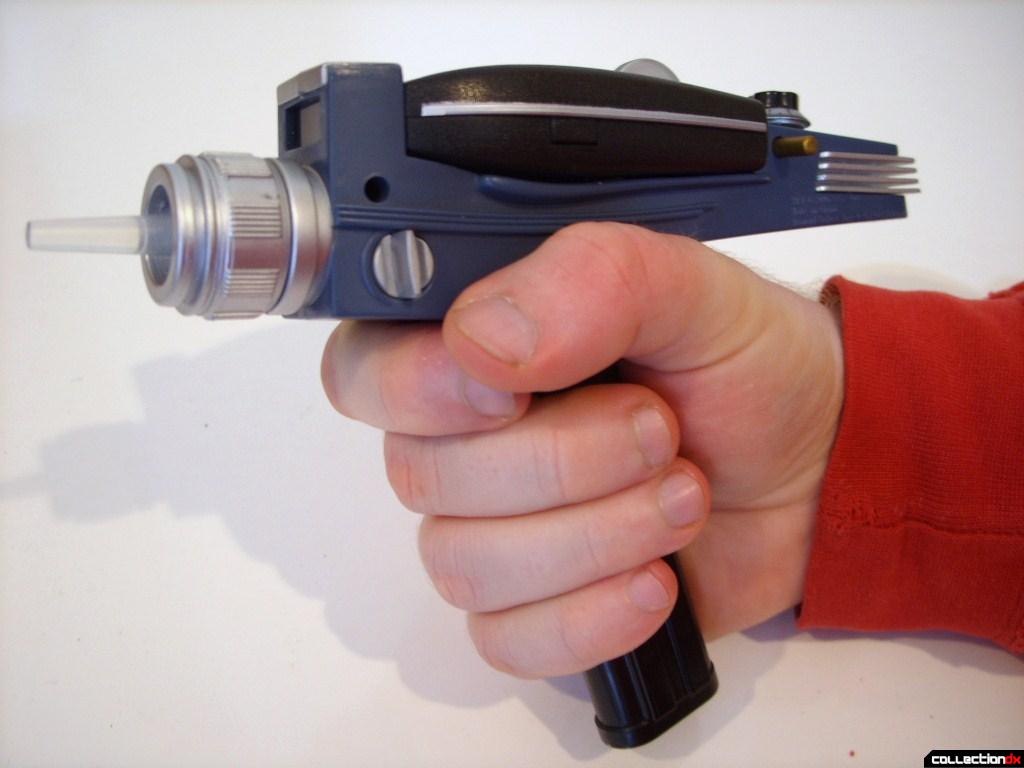 Despite the two flaws I found in mine, and that I find stuffing one small weapon inside another one both puzzling and amusing, I’m still satisfied with the TOS Black Handle Phaser. Strongly recommended!

How does this stack against the Playmates version?

I can imagine the older 90's ones, which were pretty cool in my opinion, are going to become super-cheap now that this is out.

Cool that DST put this out- a classic ST toy (a classic toy in general for that matter!) that for far too many years has only been in high-priced collectors hands only...

Honestly, I didn't research any other toys when I made this review. (I was also anxious to get this review over with, so I missed a few other points too.) Sorry.

Well, next I'll be shooting for the TWoK phaser, and if they make the Assault Phaser and 2009 phaser I'll go for those as well.

It would be nice to have comparisons with the old ones, so folks can decide which one they like better (i seem to hear a lot of complaints about DST's products, then again, ST fans are known to be aggressive about details)... sometimes just because something is old, does that make it no good anymore, even when the new model comes out? not a big deal, but oh well. Can't wait to hear about the other ones.

After I posted that, I went onto YouTube to see if I could find any reviews of the Playmates Toys' version, but oddly there weren't any. Now I'm curious to know about them.

I kind of hoped TRU would clearance this,but no dice-they only clearanced the 2009 stuff,not the classic. Nothing against 2009,I loved the movie,but this is the definitive version IMO.

I've had two of these and the tab that locks the smaller one into the larger breaks with incredible ease.

Oh? I've heard about the LED, but nothing else. I thought these were well received by collectors.

EVA, I don't know if you tried this or not, but on my phaser if you turn the silver part of the "muzzle" that will change the brightness of the light. It's not much, but it does have a noticeable effect.

No, I know about that; I think it's called the Beam Intensity dial-something-or-other. I demonstrate it in the video. But even when turned up all the way, it's still too dim.