As its name implies, Exo-Force’s Stealth Hunter Battle Machine is designed to approach enemy positions with as little detection beforehand as possible. Piloted by Hikaru, leader of the Exo-Force team, his cold blue-colored hair reflects his cold attitude towards the robots, with whom he used to test on a regular basis before the war. He is calm in a fight and natural strategy thinking allows him to control the Stealth Hunter with ease. Its white livery allows it to blend into snow or cloudy environments easily to increase its chances of remaining undetected by robot visual scanners. Like the Uplink Battle Machine created by fellow Exo-Force pilot Ryo, the Stealth Hunter has few energy intensive needs so its generator gives off less heat & EM radiation in order to remain undetected. Its only energy weapon is a long-range, high-accuracy laser sniper rifle mounted on its left arm. Its primary weapon is a double-blade longsword mounted to its right arm which can cut through armor made by the robots. Finishing out its limited arsenal is a single, short-range, variable-yield missile over the left shoulder. The right shoulder features an electronic detection dish; coupled with a pair of broad-band jammers under the cockpit, this allows it to block or scramble robot sensors. To allow the Stealth Hunter to move around quickly on its covert missions, it is equipped with a series of fusion thrusters under its feet, the stabilizers on either leg, and the large maneuvering engines on its back. It also means it can cross the deep mountain canyon without using the bridge. Unfortunately, for this to work, the Battle Machine features thinner armor for increased speed, attainable altitude, and agility in the air. This also means it’s a regular contender against flying enemy Fire Vulture Battle Machines. Like all of Exo-Force’s other Battle Machines, the Stealth Hunter uses a control system that mimics the movements of its pilot, so Hikaru has to practice with a double-blade sword as well to utilize his Battle Machine’s full potential. 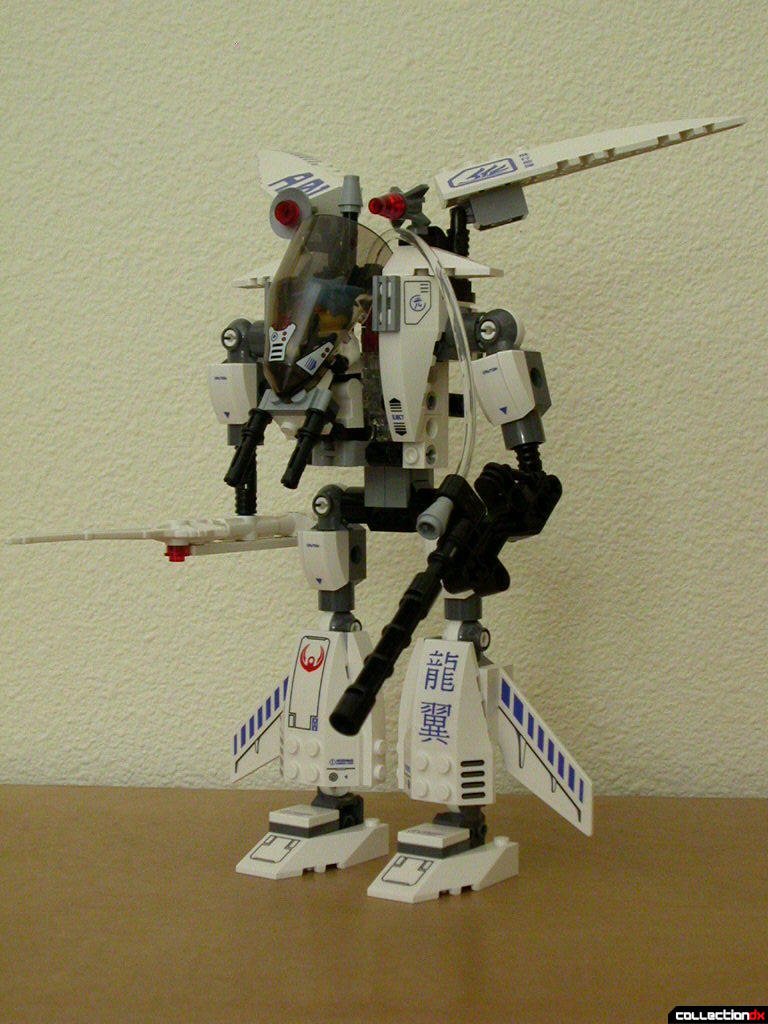 The Stealth Hunter (back) is one of the two large human-allied Exo-Force sets, and has a fragile-yet-tough looking appearance. Using joints originally developed for the Lego “Knights’ Kingdom” line, it is very flexible. The shoulders, elbows, hips, and knees have two-axis joints that snap when moved, and allow for a wide range of fixed poses. The ankles also have both snap and free-rotate joints, but this isn’t as much of an issue. The large double-blade sword, which can swivel and tilt at the right elbow joint, is made up of two identical hard white PVC pieces; they were originally made as the sword for the original Danju set (#8770) from the 2004 “Knights’ Kingdom” premier line. The tinted cockpit cover was developed for the first Lego “Star Wars” sets in 2000. And one of the black parts for the laser sniper rifle was developed as part of the moving head for the Bohrok swarm creatures (Sets #8560-8565) from the 2002 Lego “Bionicle” line. 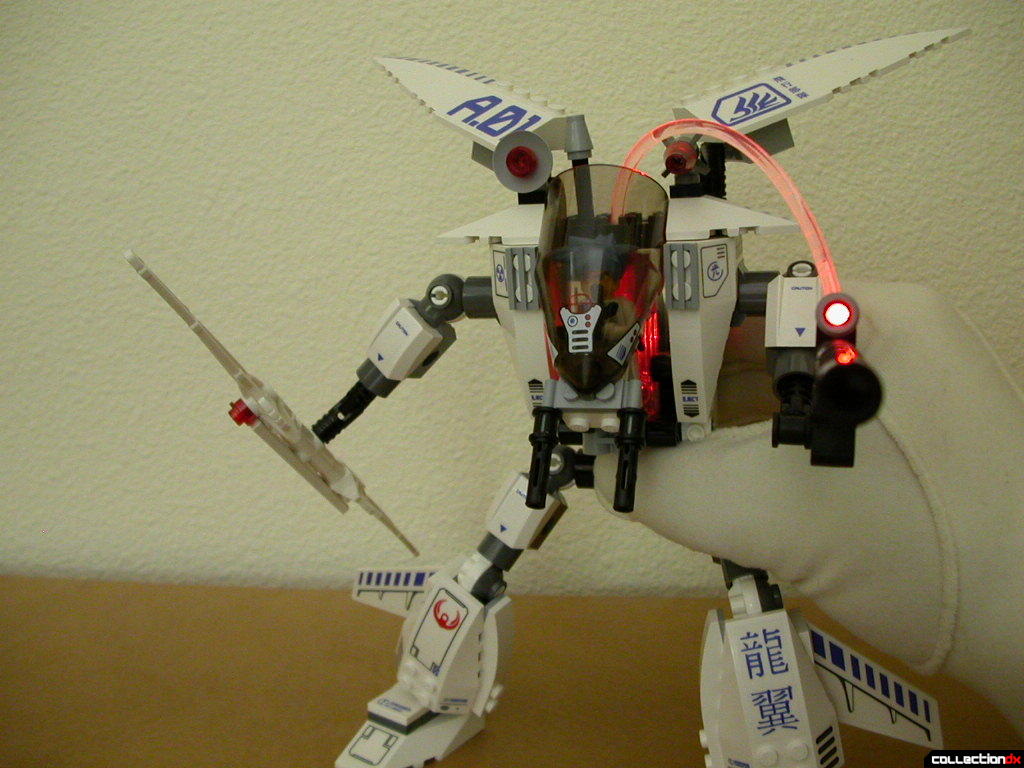 In addition to being large and poseable, the Stealth Hunter is one of five “Exo-Force” sets that use the newly-developed Lego light brick- a transparent 2 x 4 brick that has a small red light emitting diode (LED), a small, enclosed, self-contained battery, and a small trigger blended into the top. While the light brick can be snapped onto things, it has no studs of its own so nothing can be snapped on top of it or else the trigger couldn’t be accessed. The light brick in the Stealth Hunter set is activated when a multi-piece trigger is pressed on the back of the torso. This slides the front of the torso up slightly, and inside a Technic piece is wedged against the light brick’s trigger, activating the brick’s battery & LED. When this happens: 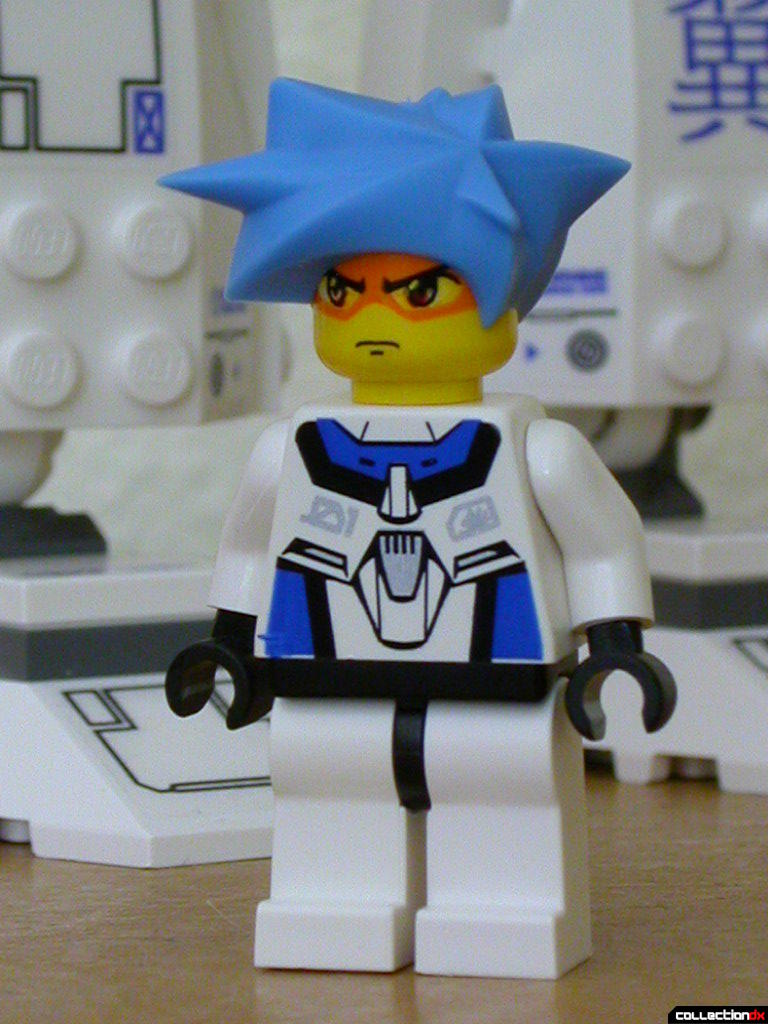 Lego Set #7700 also comes with an exclusive Hikaru minifig, who not only has two separate facial expressions (one painted on either side of his head), but a new light blue spiky hairdo piece introduced in the “Exo-Force” line, which adds to the Japanese anime style of the series. When the head and hair are flipped around, Hikaru either displays a determined face, or a battle-cry expression; both with orange battle goggles painted on. (This double-face design is similar to some of the LEGO “Spider-man” minifigs from 2001 and 2003.)

Normally, when a Lego set needs specific details on a part, such as a control panel or flag, the image is printed or painted directly onto specific parts. However, the “Exo-Force” line breaks that mold by using stick-on decals; something that was rarely ever used in the past. There is a small sticker sheet which provides allegiance markings, warning symbols & notices, and names- some of them written in Japanese text! Translations of the Japanese text are given on the sticker sheet, but do not go on the parts. This serves to allow for a wider range of piece marking without Lego having to create a completely different piece each time, and merges the “Exo-Force” and Japanese toy influence closer together. It does, however, have a small downside- because of the design of the decals, some of them cover places where other Lego pieces can go, which limits how a decal-applied piece can be used or taken apart. This covered-hole thing is not an issue with Set#7700.

In addition to building the standard Battle Machine, the official Lego “Exo-Force” website (http://exoforce.lego.com/default.aspx) shows how the same pieces can be rearranged into an alternate V-TOL-capable Stealth Wasp aerial combat vehicle; found in the Online Building section of the site, and pictured on the back of the set’s box. (I haven’t built it myself yet, so I can’t give details on the alternate model.) As a bonus, online instructions also show how Set #7700- Stealth Hunter can be combined with Set #7701- Grand Titan (sold separately) to form a much larger red, white, & gray Exo-Force Battle Machine known as the Mountain Warrior. (Again, I haven’t built this combo model yet.) 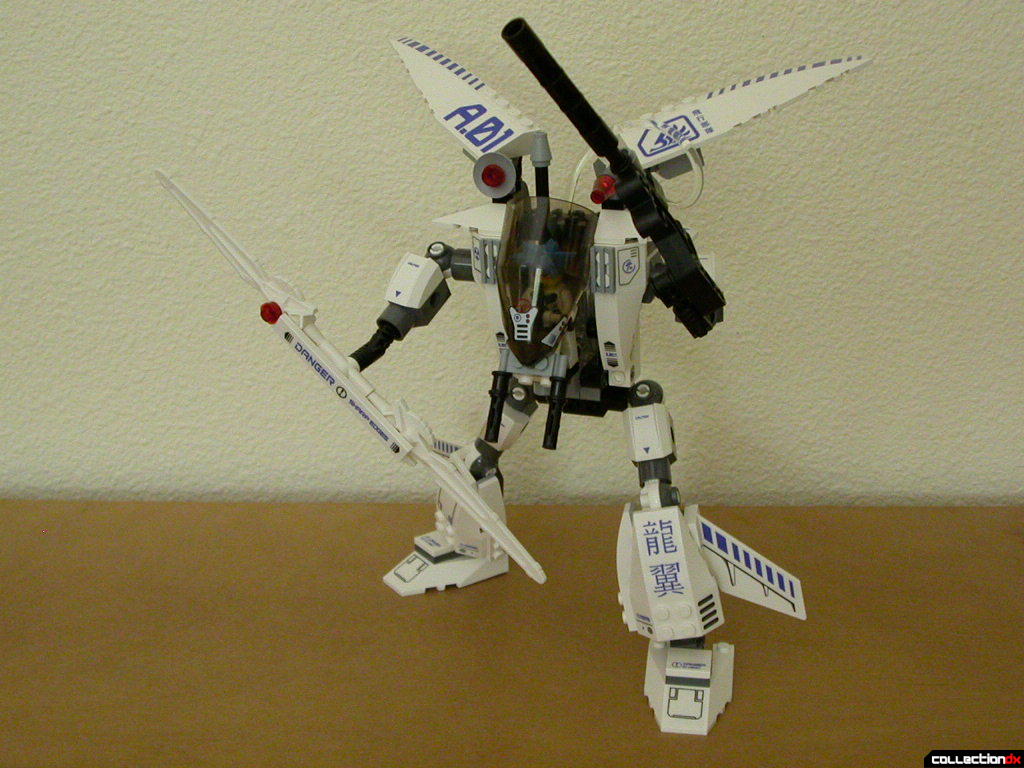 Overall, I like the Stealth Hunter a lot because of its kinda like the opposite of the Grand Titan set in that it’s white, can fly, looks agile, fast, and it has great poseability. I can’t seem to find anything really amiss with this design; it works well. I’d recommend it for anyone who likes tall white robots from anime (like from the long-running “Gundam” saga), or the popular Lego “Bionicle” line. There’s something interesting in this series, and I won’t mind seeing more of it if they continue it.