In Mobile Suit Gundam, the Federation is primarily represented by three mobile suits that each serve a specific mission role. The first was the RX-75 Guntank, a serious and successful machine. But those adjectives don't change the fact that it's an experimental prototype. Project V continued and the second machine, the Guncannon, was born. 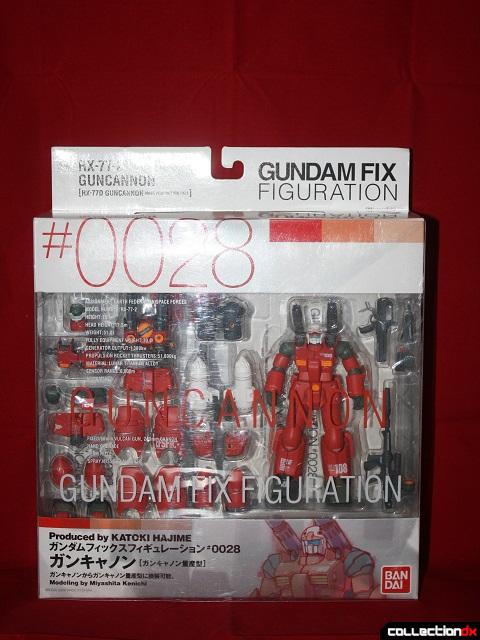 Gundam FIX Figuration #0028 is my second FIX purchase and another release in the series. As you may know, the line is devoted to the works of mechanical designer, Hajime Katoki. My first experience consisted of the original Gundam, which I bought because I really wanted its descendant: the GM. It was a good experience, so I'm happy to come back and try another. This time around, we're looking at the RX-77 Guncannon and its descendant, the RX-77D Guncannon Mass Production Type. 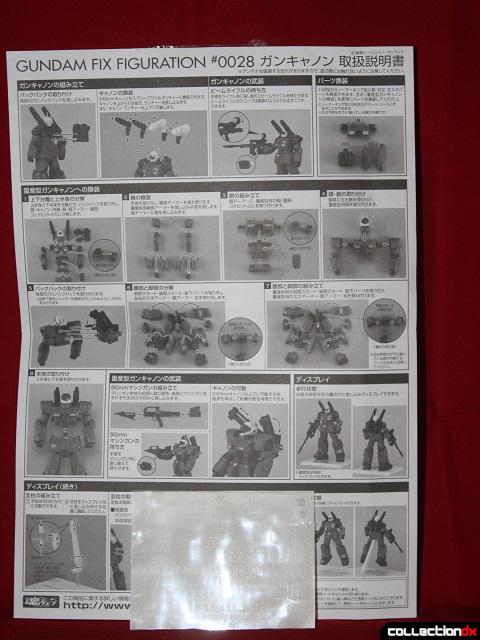 Among the contents included are a label sheet and instructions for switching from one model to the other. 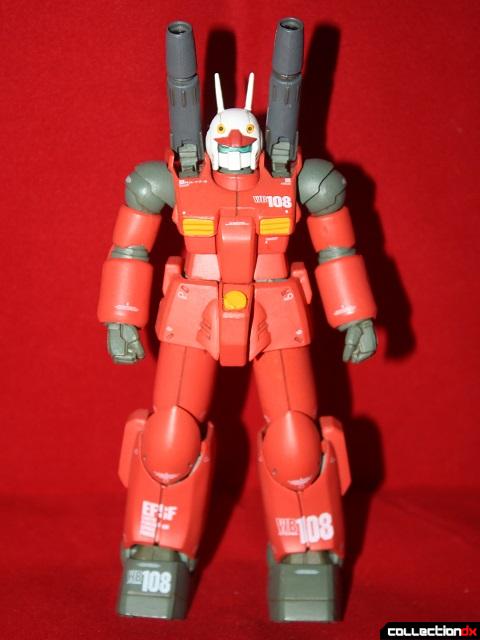 For now, I will start with the original version. Whereas the Guntank was built for long-range fire support and heavy artillery as a humanoid/tank hybrid, the Guncannon is a fully humanoid mobile suit built for medium-range fire support. This means it doesn't have the luxury of being functional far away from the battle, but it also means it doesn't have to be as quick or fast as frontline action usually calls for and the design reflects that functionality. Though kind of slow, the Guncannon is well protected by tons of heavy, thick armor. Of the three machines produced by Project V, it's by far the most durable and physically powerful. This is why it doesn't carry a shield or any melee weapons. Should close combat prove necessary, and if it runs out of ammo, it has the strength to pound most mobile suits to pieces with its bare hands.

Actually looking at the toy, I can see all of that. Katoki streamlined the design to a point, but this Guncannon still looks like a heavyweight. All the logos and printed text say military hardware, but the primarily red color scheme and visible weapons scream war machine. I can't help but wonder if this was influenced by the Red Army, the USSR. It could just be that red is associated with explosions. Or perhaps it is red while the Guntank is mostly blue and the Gundam is in the middle with lots of both plus yellow to look all nice and primary. Whatever. The head makes me think of baseball, and even more so, Fireball from Saber Rider, so that's cool. Though seeing the eyes (cameras) behind the visor is kind of threatening. 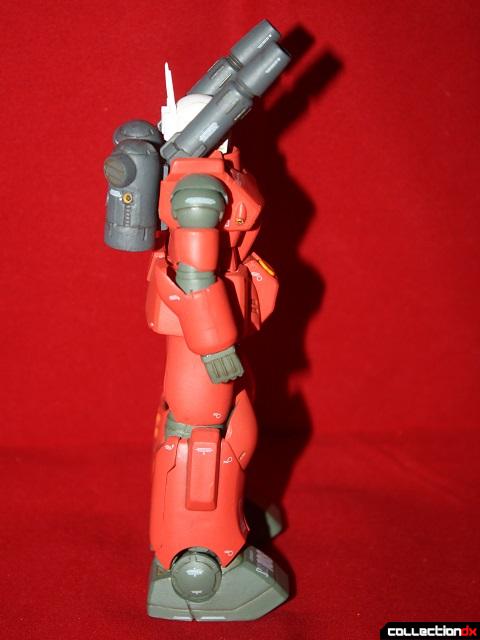 From the side, I start to get other impressions. Seeing the backpack makes the Guncannon look like a giant metal space man. Perhaps a cosmonaut if the Russian theme is what's really going on. It's also here with more grey in view that the gritty, dirty texture I observed with the FIX Gundam and GM becomes noticeable. And I'm still feeling it. It implies that this Guncannon can and will do work. 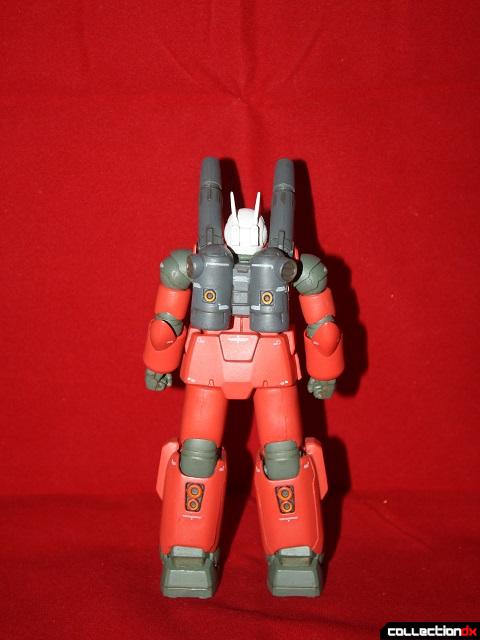 From the back, I'm getting even more of that space man vibe. The backpack looks like it'd produce a lot of thrust, vertical and horizontal. The smaller verniers in it and in the back of the legs would probably offer stability, important since the Guncannon's main weapons have a lot of kick. 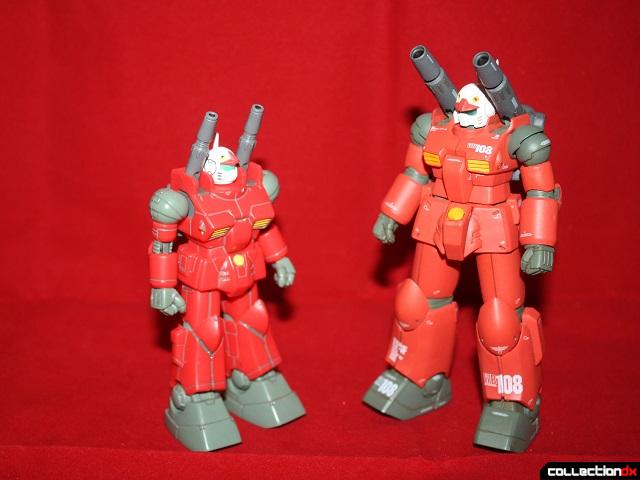 Next to its MSIA counterpart, it's easy to tell where Katoki made his changes. To the left, 1979, and the right, today. I'm glad he embraced the details, rather than turn it into something different, which he does sometimes. It's still the Guncannon, just...I don't know, and more polished I guess. 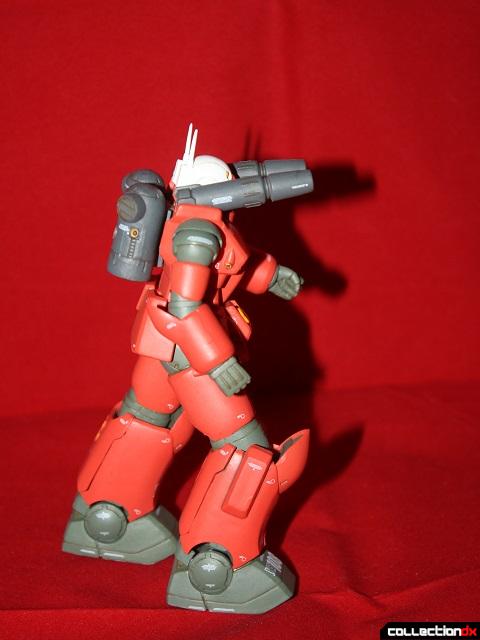 One thing that would have been nice is if Katoki had found a way to make it more flexible. I know it's not impossible to do that, so the articulation or lack thereof is probably meant to be true to the spirit of the Guncannon. What you see here is about all you get. The ankles are excellent, letting the feet tilt back and forward plenty, and really tilting from side to side. The knees bend about 90-degrees. The hips are on balls but only get full range going forward, because only the front skirts can move while the rest are pretty static. The waist only twists a little, due to the side skirts. The shoulders are stiff balls, the elbows hinge, and the hands swivel at the wrist. The head can tilt up a bit, and has a little side to side, but that's it. Imagine a body builder that doesn't stretch or do any cardio, and you've got the Guncannon. 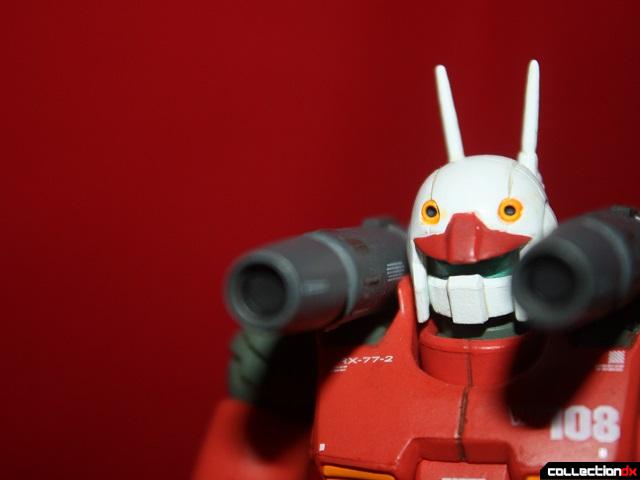 For weapons, the Guncannon has a pair of 60-mm Vulcan cannons mounted in its head. 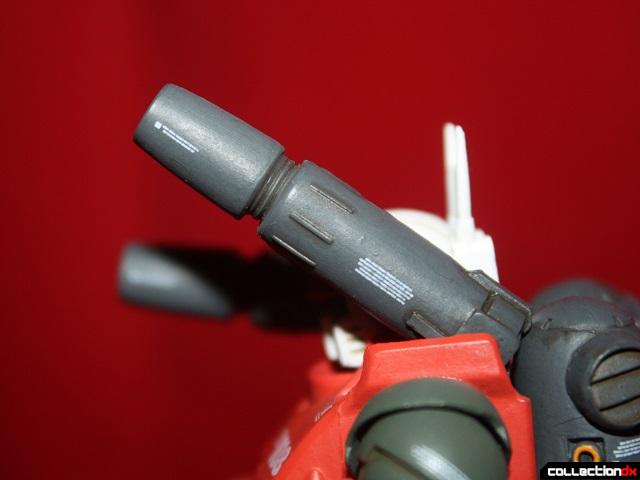 A pair of 240-mm shoulder cannons mounted on its shoulders. They don't have the same range as the Guntank, but hit even harder, and can be fired in tandem or independently. The one real problem is they don't store a lot of ammo. They're perfectly stable and maintain whatever angle you set them at. 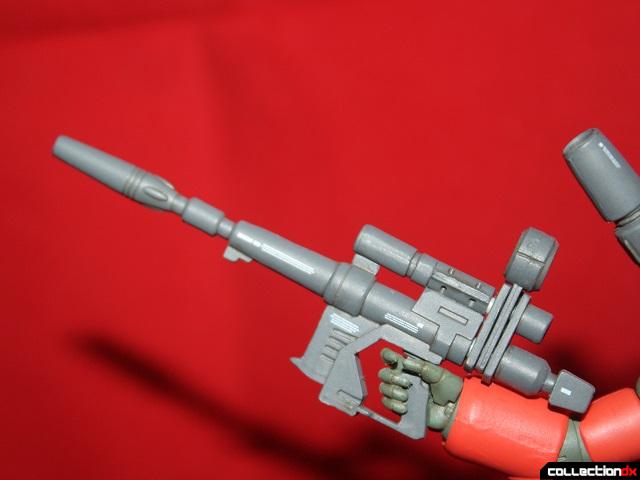 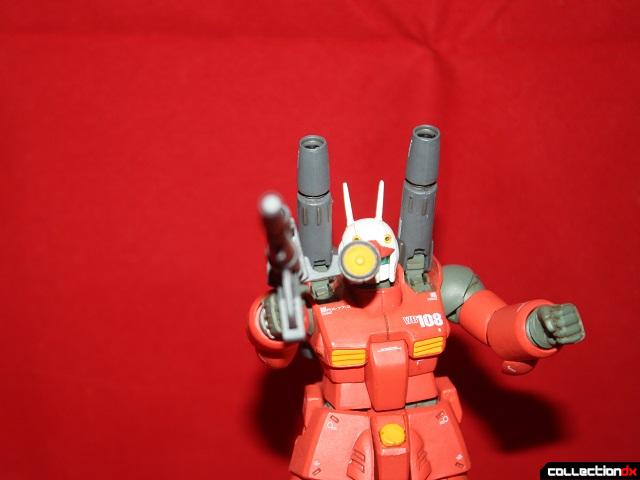 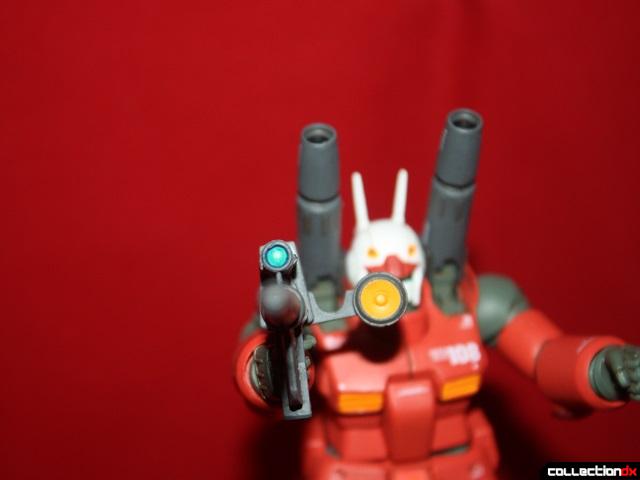 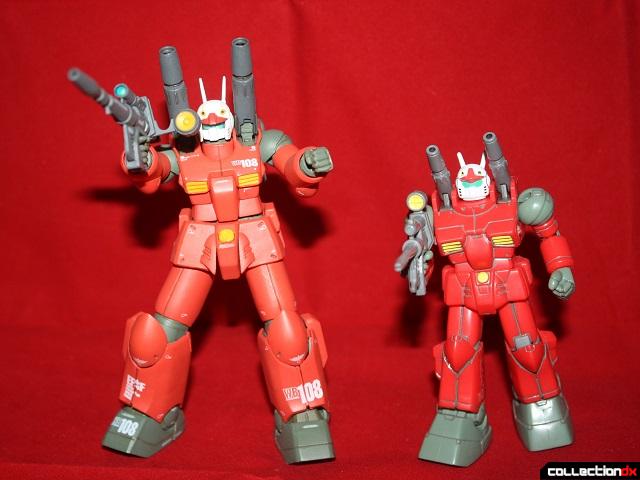 And here is the beam rifle. Useful in all situations and a pretty big deal, because it was thought at the time that only something the size of a battleship could utilize such a weapon. This particular model is slightly more powerful than the one carried by the Gundam, but its charge doesn't last as long, which means it doesn't get as many shots off. The detailing on this is pristine, and I dig the moving sight. It could only be better if this Guncannon was flexible enough to hold the rifle with both hands in an offensive pose. At least it has multiple hands to work with (2 closed fists, 2 weapon holding hands, 2 open hands).

Next to the MSIA for comparison, you can also see those protrusions on the outside of the knees. Each one is a container for a grenade, but they're only sculpted on so no throwing long bombs this time. 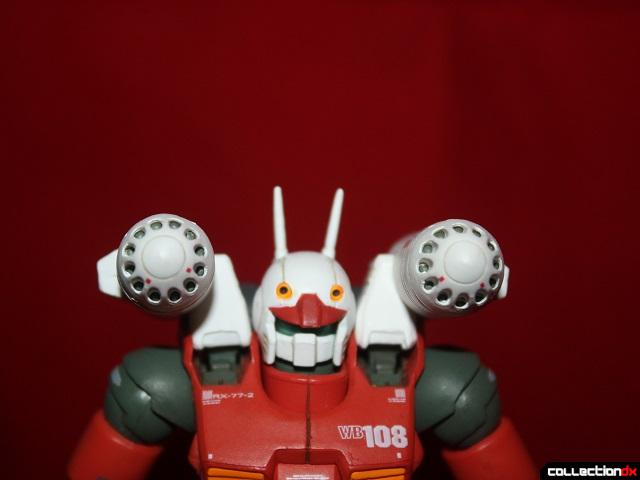 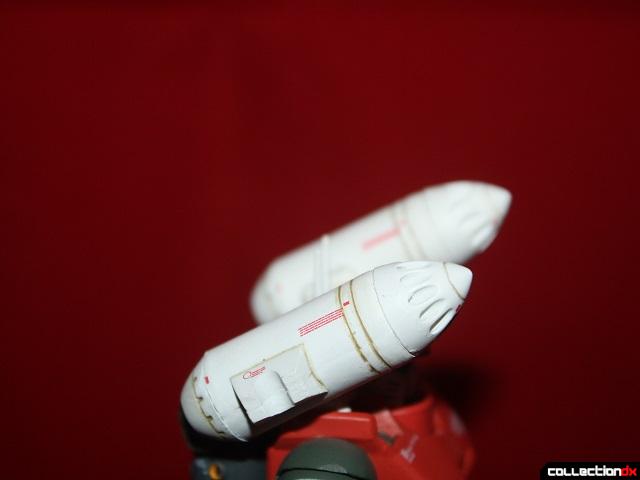 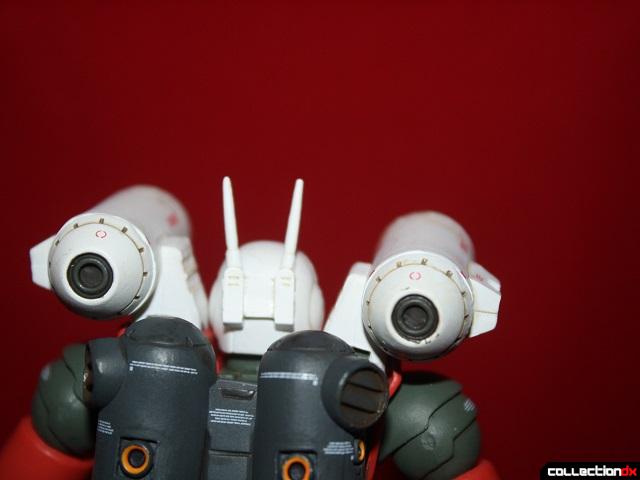 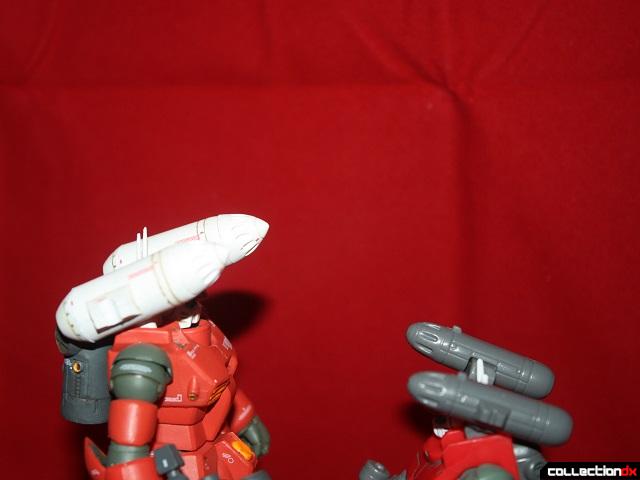 Also, though rarely seen in media, the shoulder cannons can be exchanged for these spray missile launchers. I suppose these would be more effective against targets smaller than a mobile suit, or for suppressing fire. They're as stable as the shoulder cannons, but their size limits their range of motion to half that of the cannons. 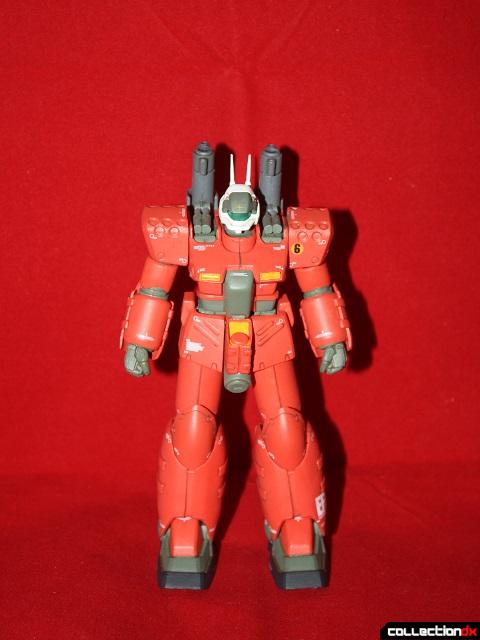 Now we turn our focus to the other half of this package. To convert from the prototype to the mass production Guncannon, you have to swap the feet, foreleg armor, knee armor, front and back skirts, crotch plate, lower body armor, cockpit hatch, chest armor, backpack, head, and forearm armor. You don't swap the shoulders, but you do put additional armor on them. 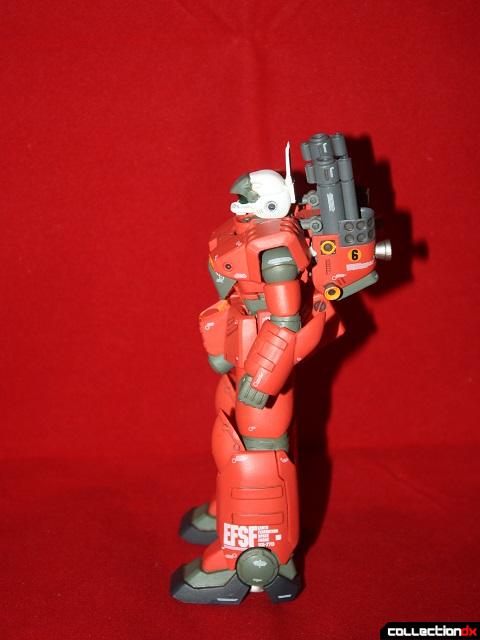 I can see the similarities, but also more...fancy attributes. The RX-77D was designed and built only several months after the original Guncannon was sent into action, but it looks like it came from the distant future in comparison. Now I see a giant robot. 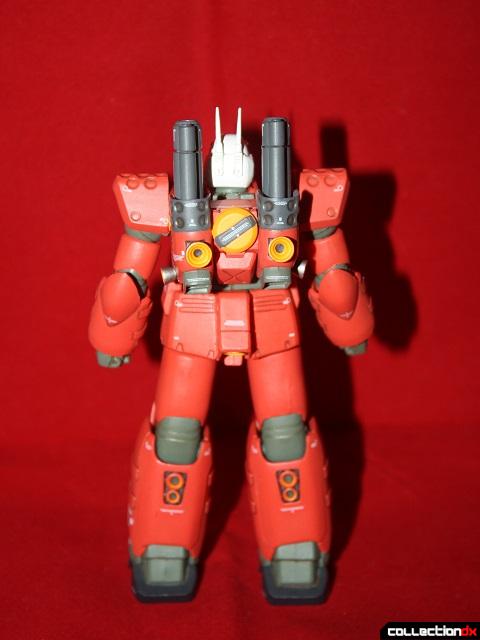 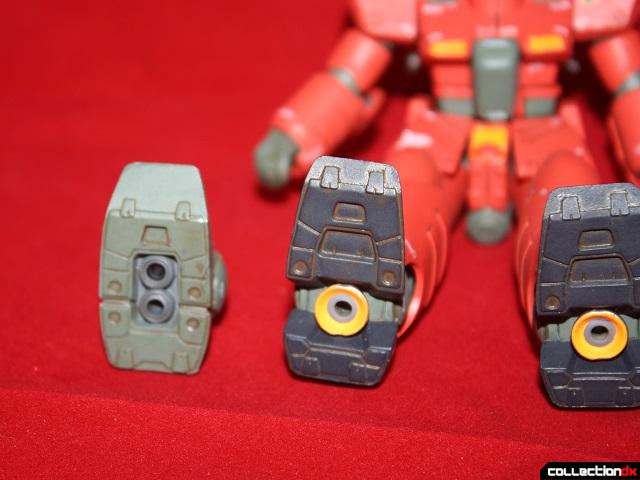 It's not a total improvement all across the board. The core block system has been removed entirely, and the armor is less expensive, durable. But more and more powerful thrusters have been added, increasing speed and maneuverability. Think less Andre the Giant, more Hulk Hogan. Also, its firepower is more plentiful and diverse. Articulation wise, everything is the same. 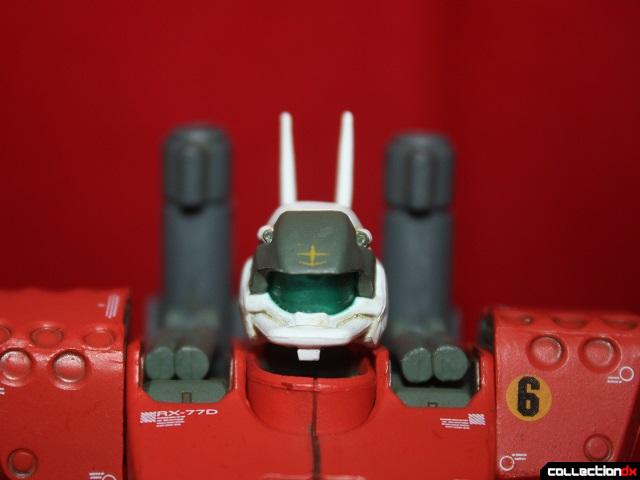 The head is new, but it's still sporting the 60-mm Vulcan cannons. 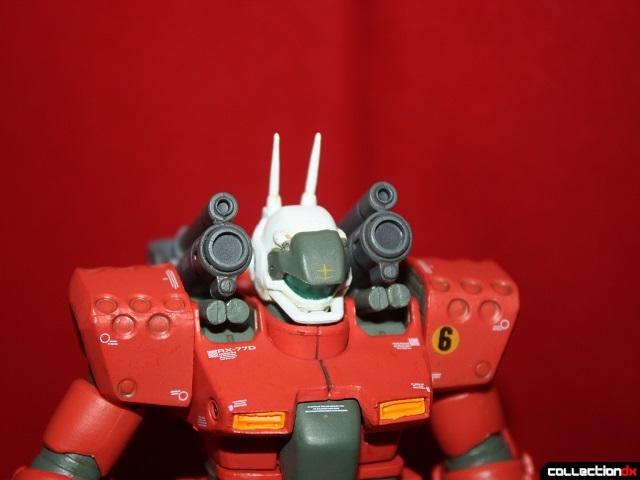 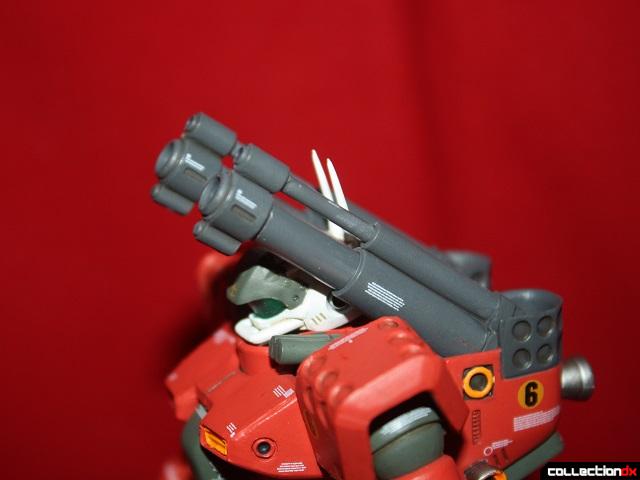 The shoulders are now committed to these 200-mm cannons. They store in the backpack, but hinge forward and can extend at the barrel. They look really cool, like big shotguns. But something, on mine at least, is off that keeps the backpack from fitting perfectly. As a result, one of the cannons always sits just a little higher than the other. Not a big issue, but still worth noting. 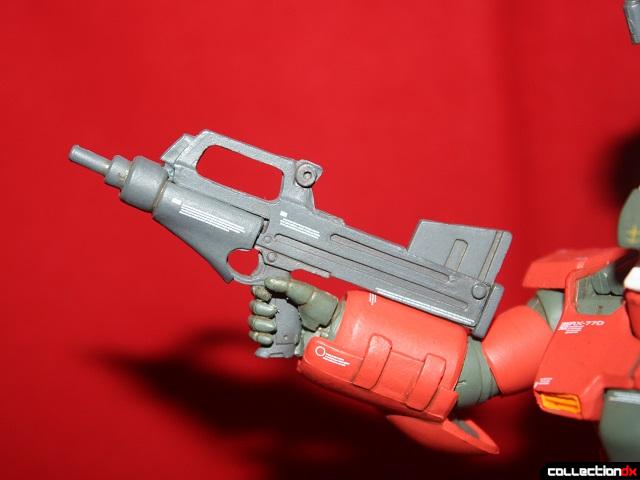 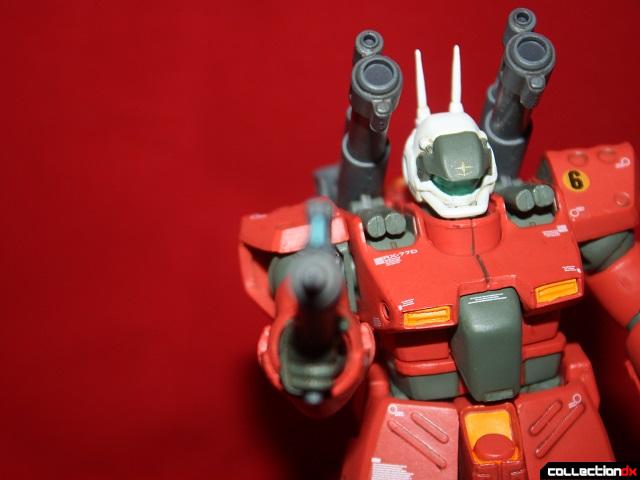 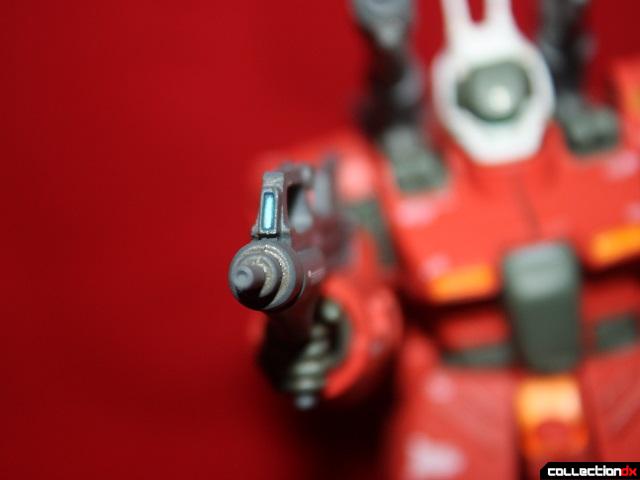 The RX-77D still uses the beam rifle, but can now also carry a 90 or 100-mm machine gun. I have no idea which machine gun this is. It looks nice, but my greater concern is that once assembled (comes in 3 pieces), it can't be taken apart. Another minor issue, but now it doesn't have a particular spot for storing in the tray. Guess it can go behind everything else with the manual and labels.

Once again, a couple of stands are included, one of which can use an arm for air posing. The Guncannon is a ground-pounder though, so I feel the smaller stand is most appropriate. 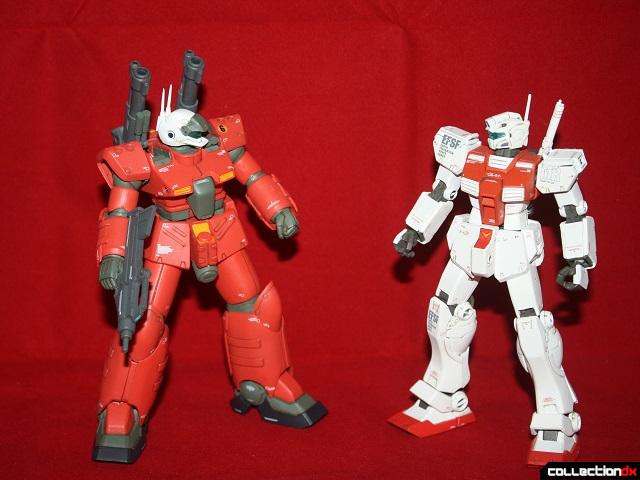 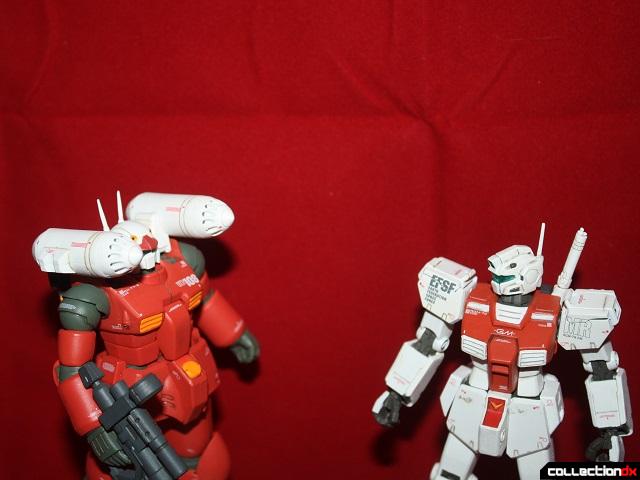 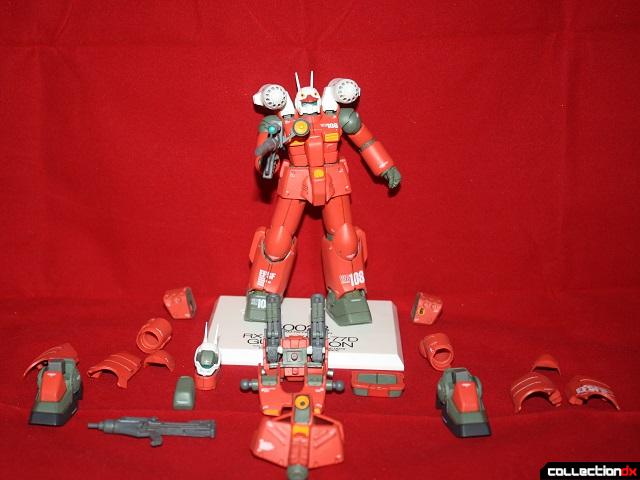 G.F.F. #0028 is a pretty good package. It contains two toys that I enjoy, but there's certainly room for improvement. The RX-77 doesn't carry a Core Fighter. After converting to the RX-77D and back, the rear skirt is a smidge looser and likes to pop off now and then. Also, both units have limited in articulation. So if you're really only interested in one of the two, you might be better off finding an alternative instead of spending $70+ on this.

But if you enjoy the FIX/Katoki aesthetic or the 2-in-1 novelty, this may be up your alley. Me, I think down the road I'm going to purchase another one and keep it in RX-77D form. I can always use a Guncannon from the future.