Pandora marks the first female in the Saint Cloth Myth line and was a premium release in 2006. True to the myth of her namesake a great deal of trouble in the world is caused when she opens the box. She is a creepy, sad and dark, Goth chick that spent most of her life serving Hades – God of the Underworld and she is next up in my series of reviews of the Saint Cloth Myth line. 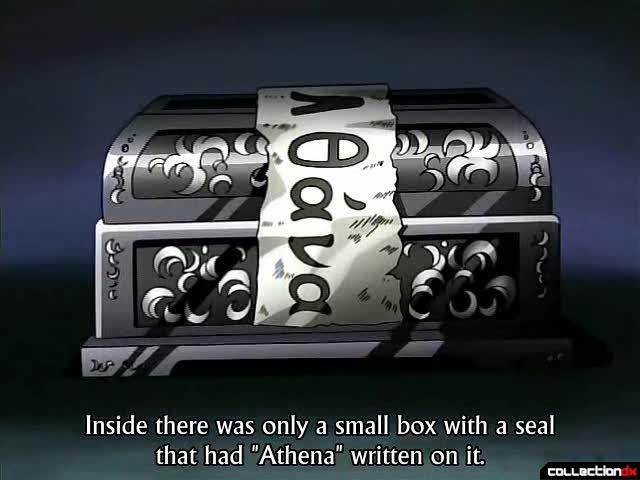 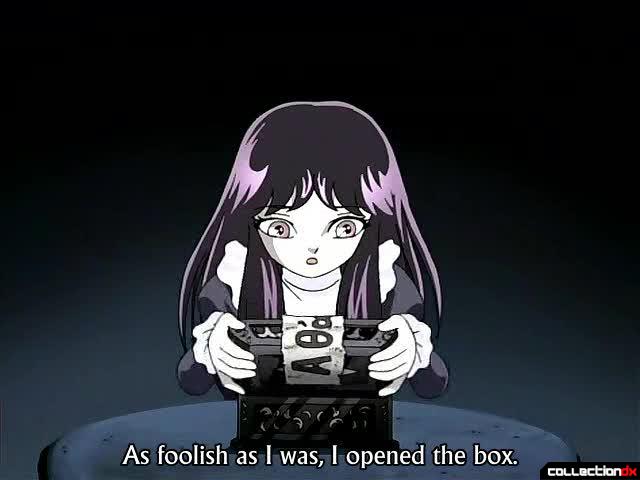 From Wikipedia
“Hades' sister in this lifetime, at a young age, she opened the box that was sealed by Athena and released Hypnos and Thanatos. She was told that Hades will become her brother and she must protect him until the final battle begins, if she would, they would grant her eternal life. She commands the first wave of Specters to attack the Sanctuary in the name of Hades in the final chapter.” 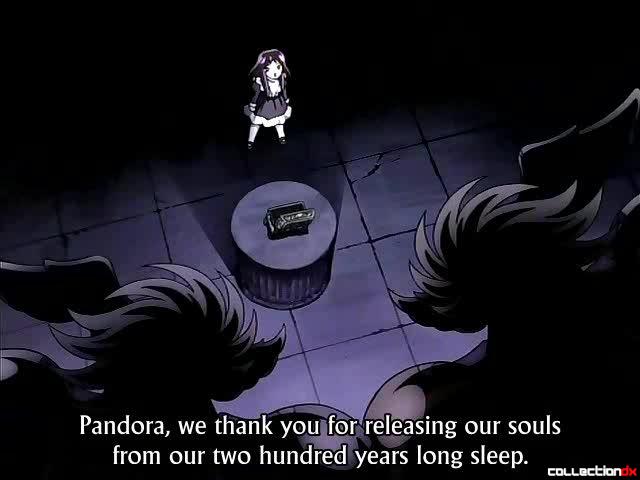 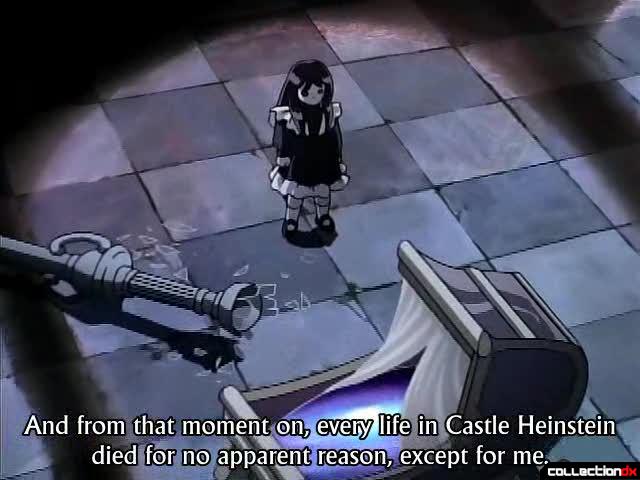 In the end, Pandora realizes she was misled and aids our heroes by giving Phoenix Ikki the means to get from Hades to Elysium. She is struck down immediately by Thanatos for the betrayal against Hades. 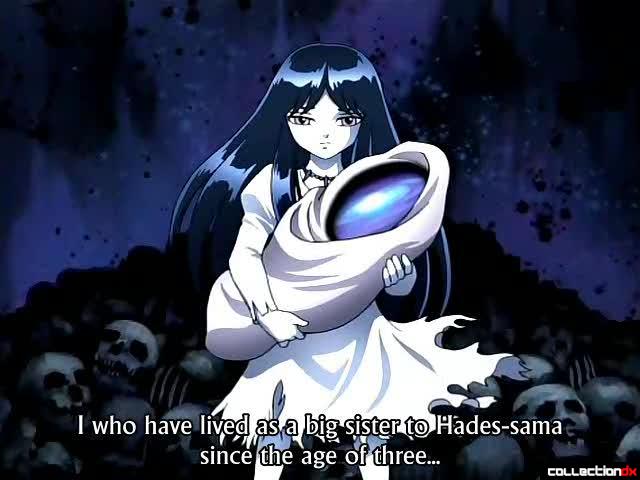 Bandai will do several “premium” figures every year for the Saint Cloth Myth series. “Premiums” are mail-in figures (much the way Kenner/Hasbro did/does with Star Wars here in the states) in Japan. Collectors would gather Proofs of Purchases out of existing Saint Cloth Myth figures, Manga’s, and OST’s to get them. Premium characters tend to be non-armored characters as well as less popular so Bandai does smaller runs to get the characters to the die-hard collectors. 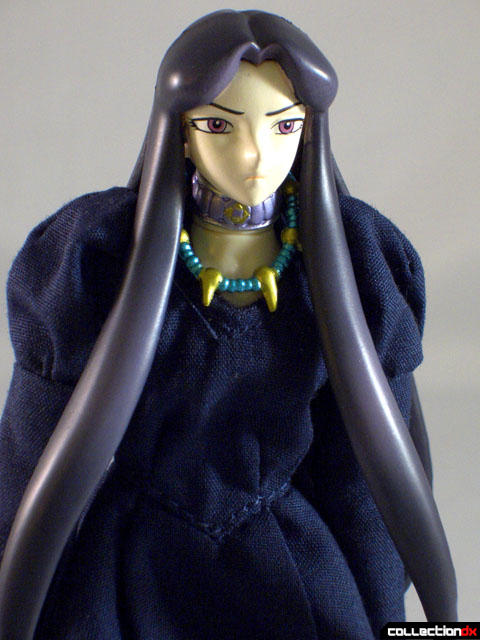 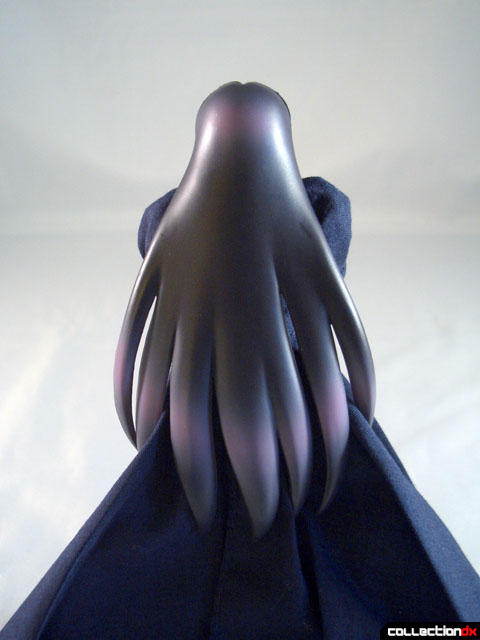 While there is no diecast in this set (every accessory included is plastic), the stitching and design of the cloth outfit and detail in the sculpting is excellent. I’d say I am surprised at the level of detail but I am not, Bandai has been pretty consistent with the quality, fit and finish of the Saint Cloth Myth line. Being a mail-in premium doesn’t mean they skipped on quality or appropriate accessories. 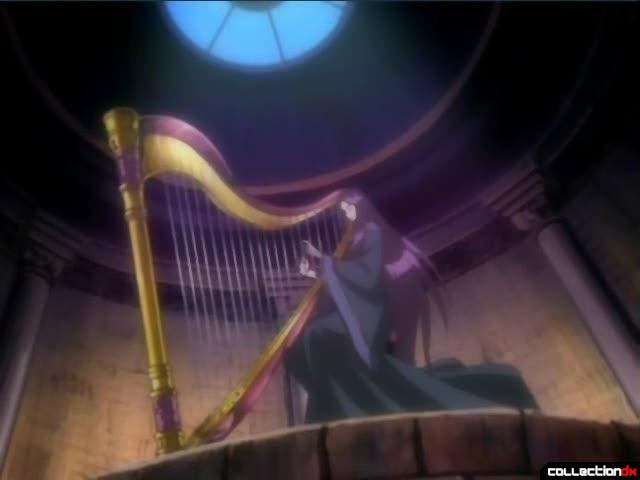 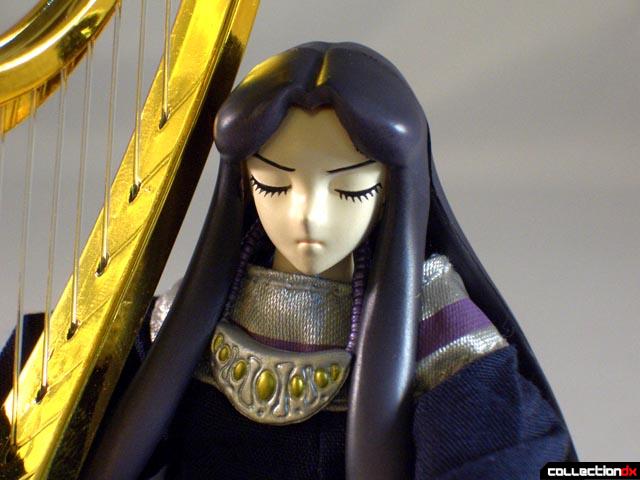 Pandora plays a harp in the series and of course, Bandai includes one in the set as well as a stool for Pandora to sit on. The harp is plastic, features beautiful detail in the sculpting and individual strings for her to pluck. 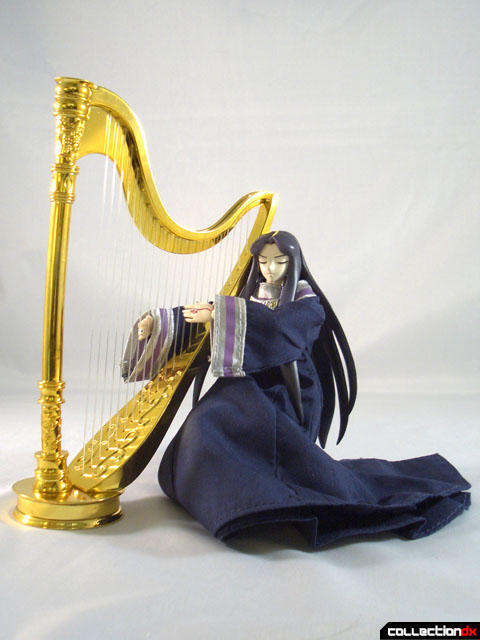 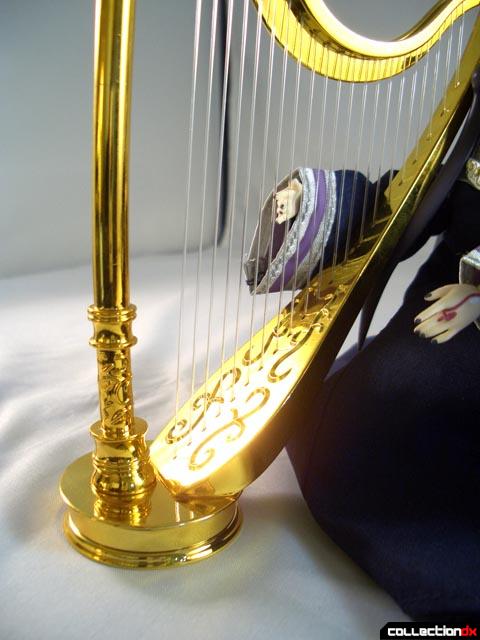 Hades trident is another item used by Pandora in the series and of course, one is included as well. Again the trident is plastic and not diecast metal, which was a bit of a disappointment as I have gotten pretty spoiled by the diecast items and weapons in previous releases. 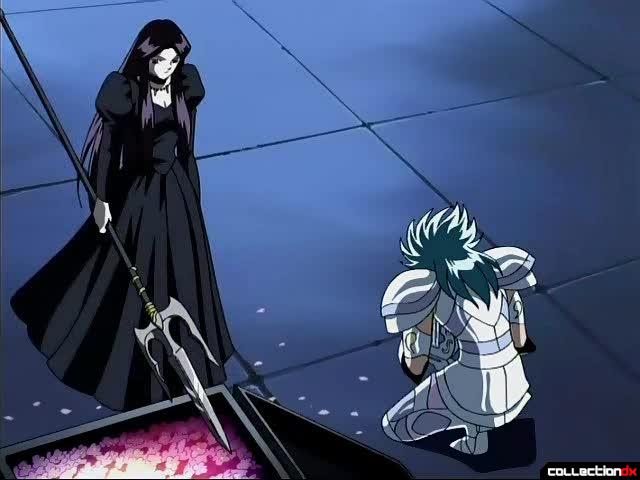 Pandora was packed with a stand and accessories for three additional stands so should you want to display Pandora with the three Judges of Hell you can. Stands also include a sheet of stickers with the names of Pandora and the three Judges. 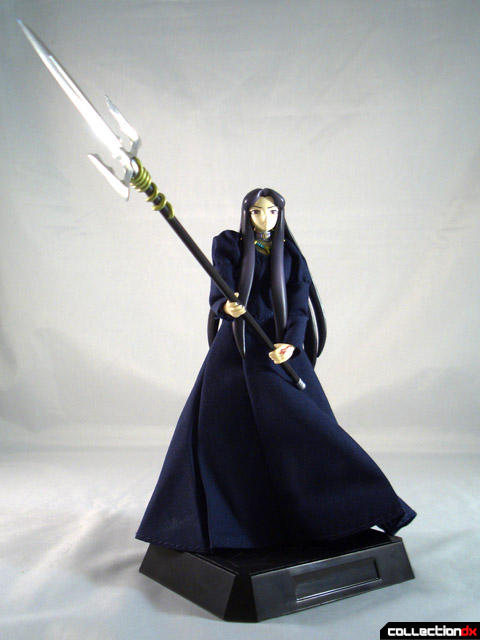 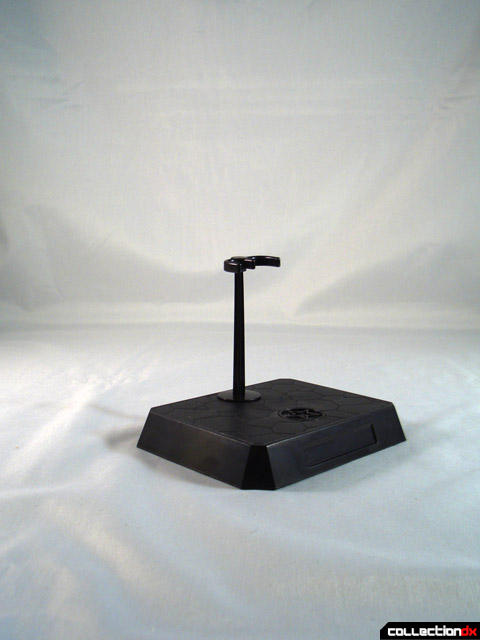 Like I mentioned earlier, sculpt detail is very good with no detail left undone. She features black fingernails and her ring/bracelet. Paint application is good with no slop or overspray. 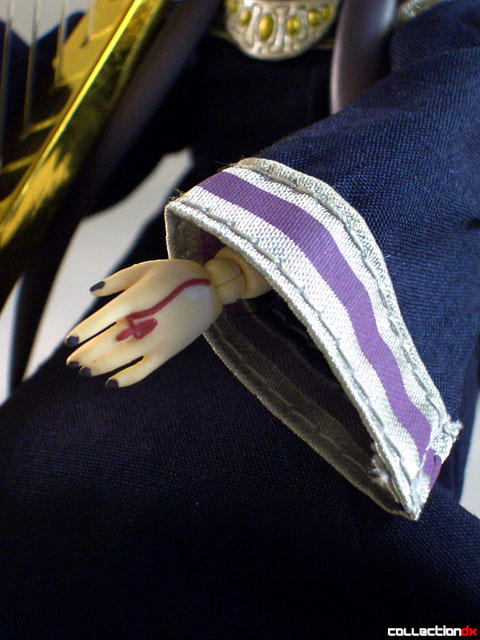 Also included are the various neck adornments she wears throughout the series. 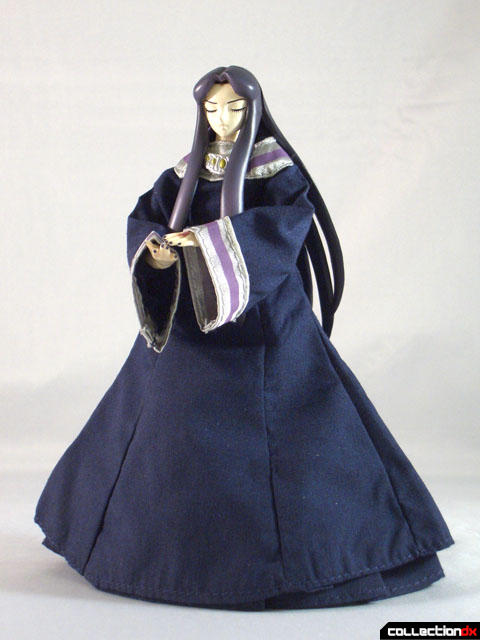 Pandora comes with two dresses. Technically one dress and one robe to put over the dress to replicate Pandora’s various looks from the OVA. Stitching detail is very nice and honestly this is one of the best cloth outfits I have seen on a figure of this size. 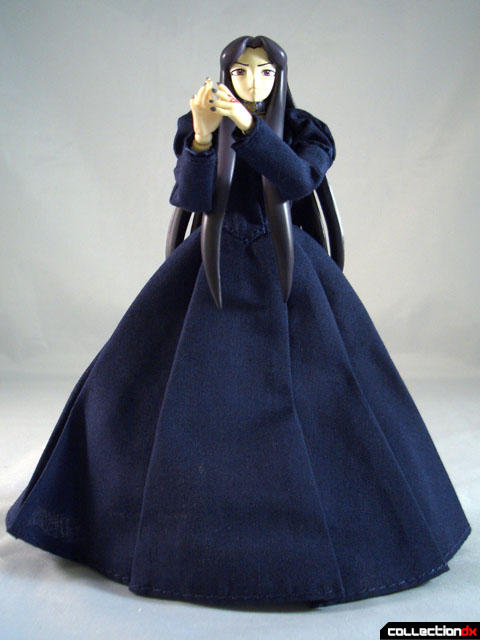 Basically I wanted to add Pandora to my collection to accessorize Hades on his throne and she does that well. She is an excellent representation of a good villainous and poses as well as she looks. 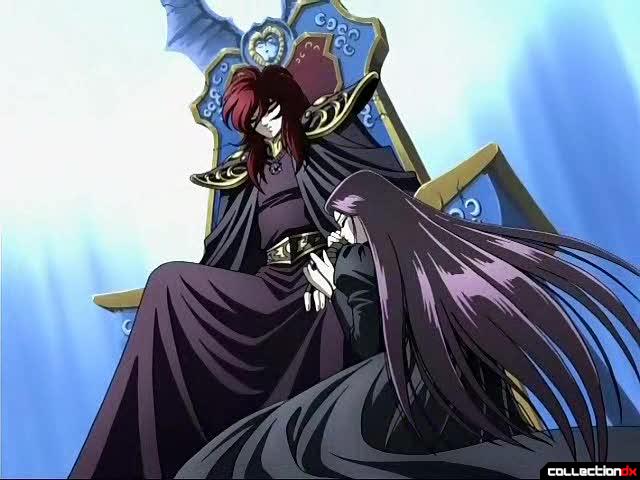 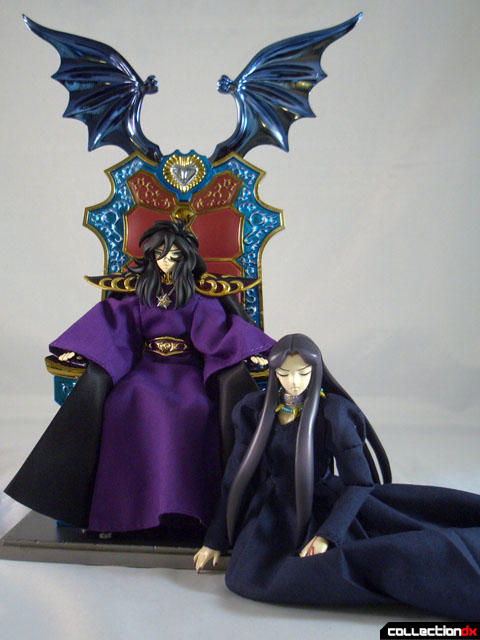 If you’re not watching the show and collecting the figures regularly available there is no reason to recommend this figure to you as there is probably no good reason you would want a little harp playing, trident wielding, pale, Goth, freaky gal in your collection.

If you are collecting the series and watch the show you don’t need me to tell you why you want her in your collection. I am here to tell you it is a nice figure with some nice accessories as well as some very nice detail in the cloth outfit and worth getting your hands on if you are a fan.

Cool review, especially the video. You keep raising the bar with those. Cut it out. ;)

Your review and pics of this have got me wondering about Saint Seiya. I have read the other reviews on this site. They look excellent, and I am strongly thinking of purchasing one. Could anyone please give me any advice, recommedations or any info on what to look out for like durability/ fragility etc.

Thank you so much for the info. They all look very nice, when I decide on which one to get it will also depend on cost as I am going need it shipped to Northern Ireland. Just one big question, if I have one of these figures in my hand and go to move it, is the armour pieces going to fall off, or do they attach well to the figures?

Thanks again man you have answered all my questions. Now I am going to have to decide on which one to purchase.

God Cloth Seiya looks great, I will look forward to reading your review of it. I am really liking Sea Horse Baian, but maybe I should go for a main character from the show, so far I have only seen the first episode and it seems very good.