Kamen Rider Ryuki, which began airing in Japan in 2002, ushered in a new era of increased merchandising In the Kamen Rider franchise. In the new era of hyper-merchandised Kamen Rider shows that followed, the quality of the shows ranged from cash cow with a painfully boring story line whose only existence is to sell a crap-ton of toys to well-made show whose writing makes you want to buy every last bit of merch that Bandai can produce from that show. Kamen Rider Ryuki falls in the better part of that spectrum. The show is an interesting mix of Kamen Rider and Highlander, with a monster as-a-companion theme. The show features over a dozen Kamen Riders who use their Advent Decks to summon their own unique Mirror Monster.

Magnugiga is the Mirror Monster of Kamen Rider Zolda, a sneaky lawyer that will use any means necessary to ensure that he wins the Rider War. Fittingly, Magnugiga bestows Zolda long-ranged weapons that allow Zolda to fight from a comfortable distance. 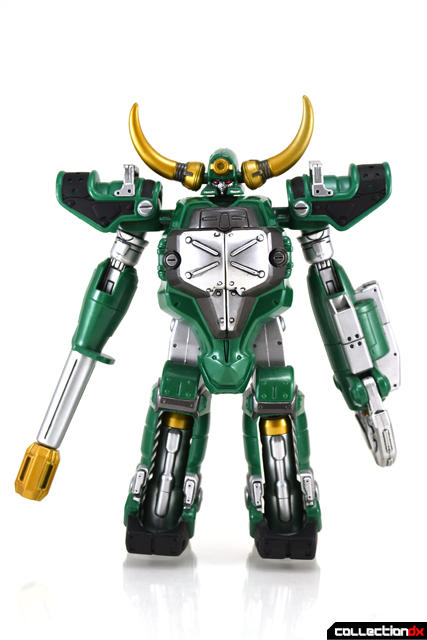 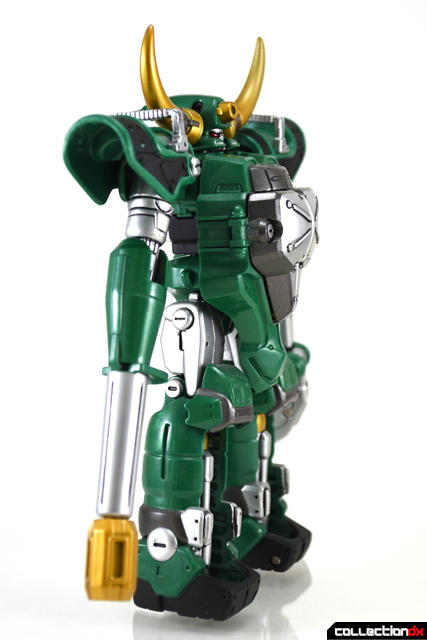 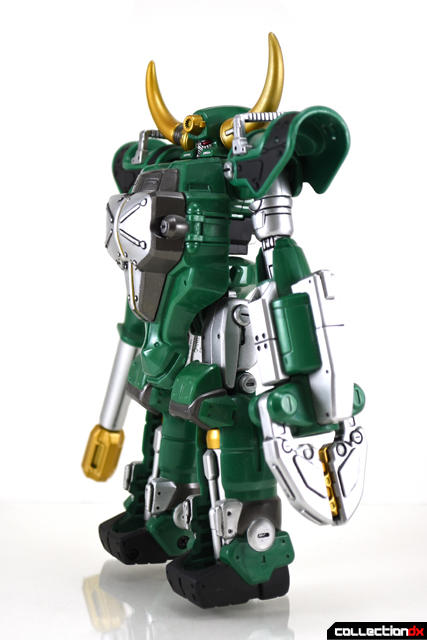 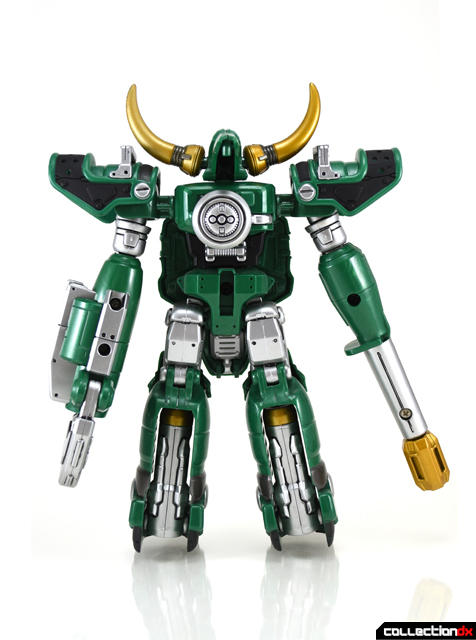 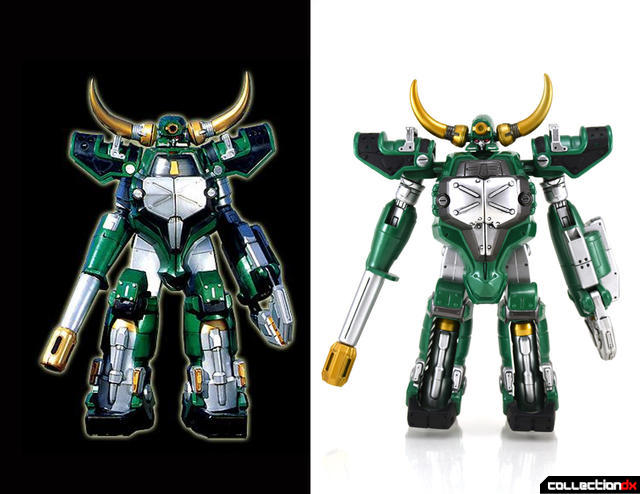 The legs of the Souchaku Magnugiga are shorter and much of the body as a whole is of a much slimmer build, save for the chest which appears bigger on the toy than the on-screen Magnugiga. 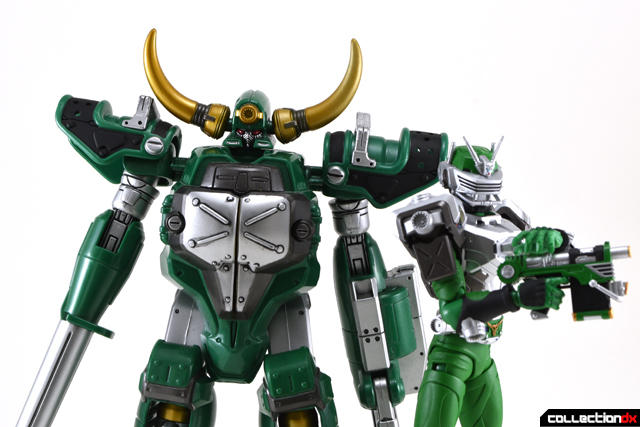 Articulation for this toy is somewhat limited, but that is to be expected since this toy wasn’t created with the end goal of being super-poseable.There is articulation in the shoulders, elbows, thighs, knees and neck. 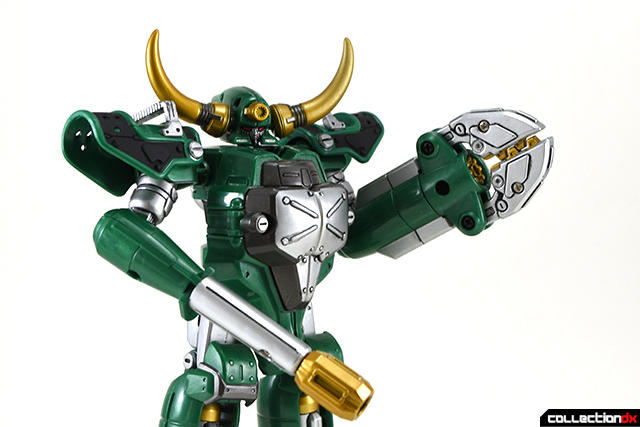 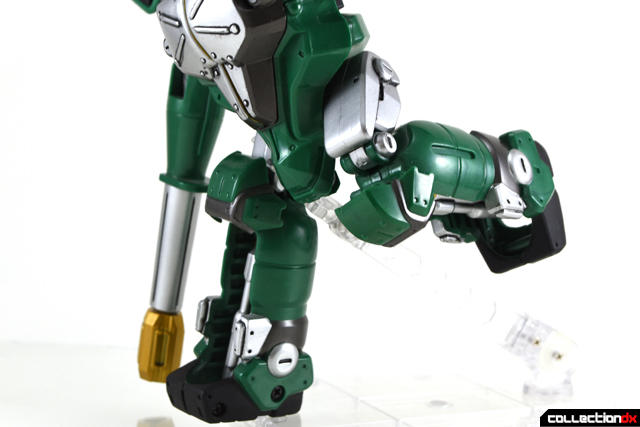 But as I mentioned before, articulation isn’t the name of the game for Magnugiga. It’s meant to look like a BAMF buffalo and provide Zolda with a BFG and a few other weapons.

As a companion piece for Kamen Rider Zolda, many of the weapons for the Rider are composed from Magnugiga’s body. Every piece of the buffalo is used as part of Zolda’s arsenal.

The head becomes a gauntlet for Zolda. This is Zolda’s Giga Horn, which was never used in the show. 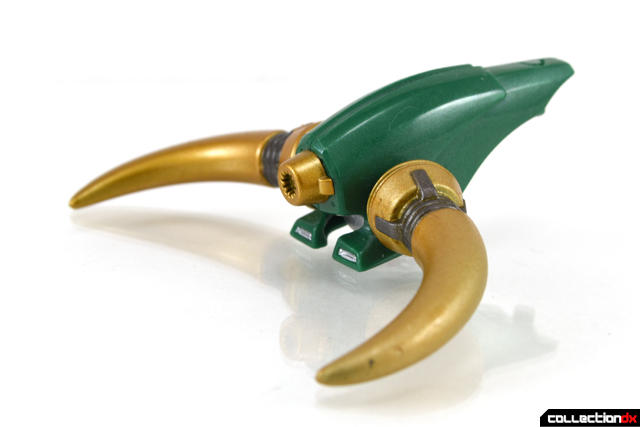 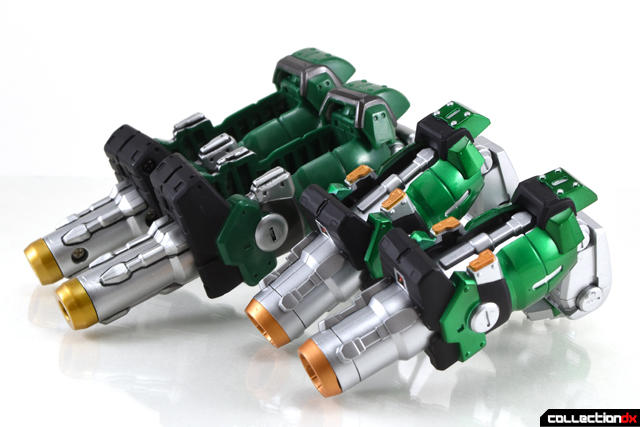 The Giga Cannons in the foreground are the Figuarts versions, which are smaller than the Souchaku Henshin version.

Since Figuarts Zolda isn't very compatible with the Souchaku Magnugiga, I can’t demonstrate what the Souchaku Henshin Magnugiga’s weapon looks like on Zolda’s shoulders. Due to the incompatibility between the lines, I will mostly review the Magnugiga as a standalone piece.

The knees become Giga Tector(s?), shoulder pads for Zolda. These pieces of armor, like the Giga Horn, are never used in the show. 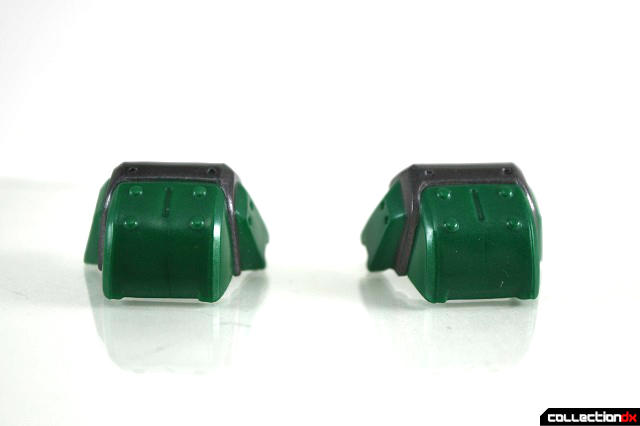 The chest of Magnugiga becomes a heavy shield known as Giga Armor. The Figuarts Zolda ends up holding the shield rather low due to the sizewe  difference between the lines. 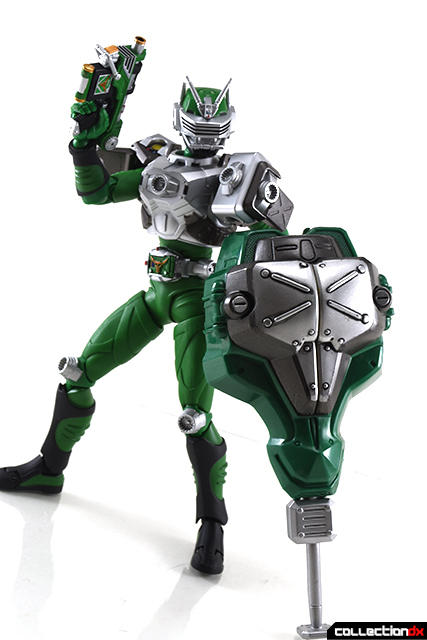 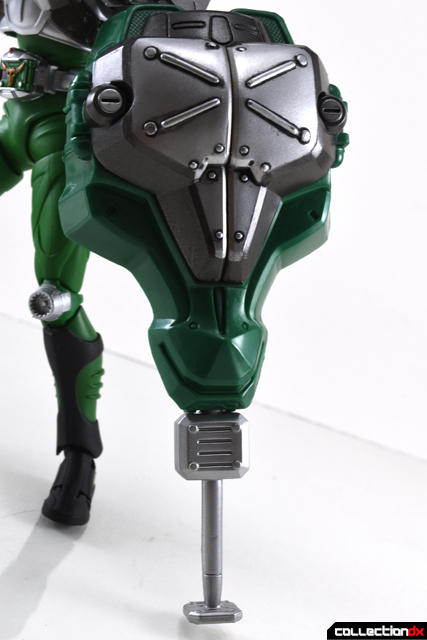 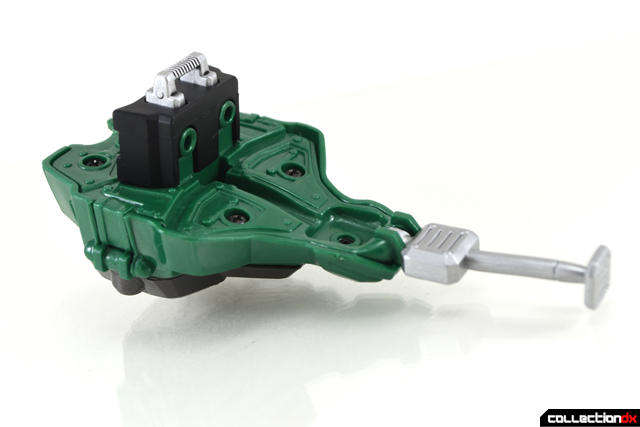 The torso and arms become the Giga Launcher, a very impressive and massive part of Magnugiga weaponry repertoire. 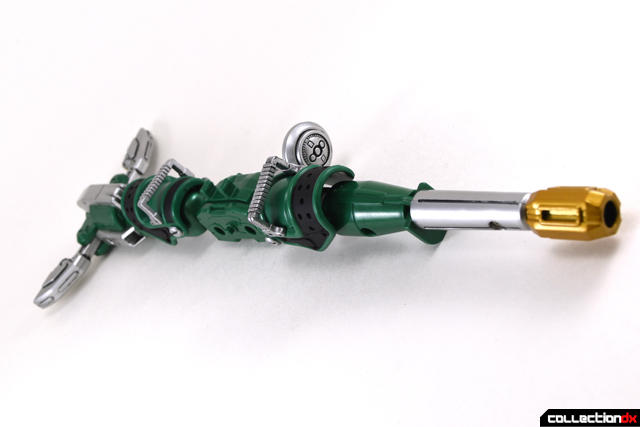 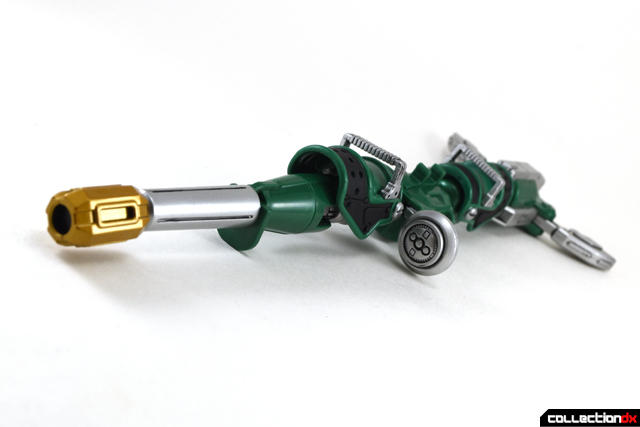 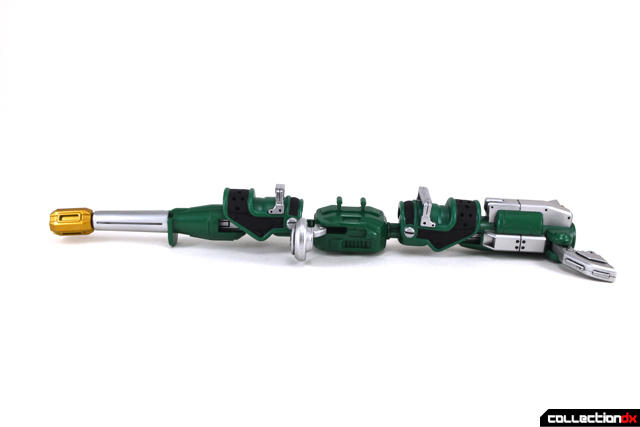 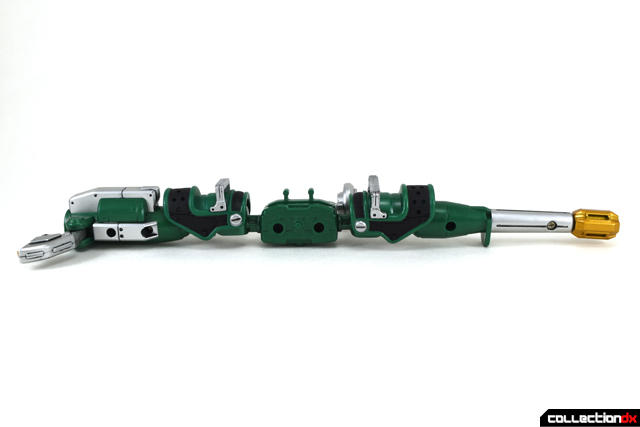 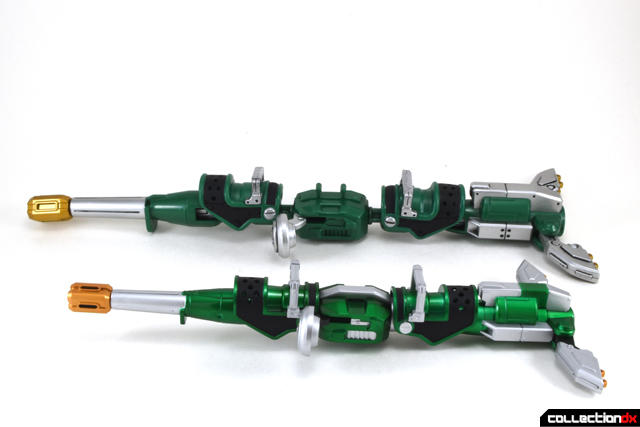 You can prop of the Giga Launcher up using the shield and a stand that is included, making it easier for Zolda to hold the immense weapon. 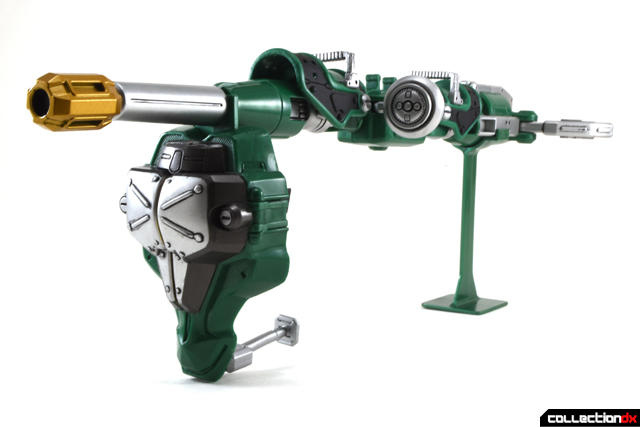 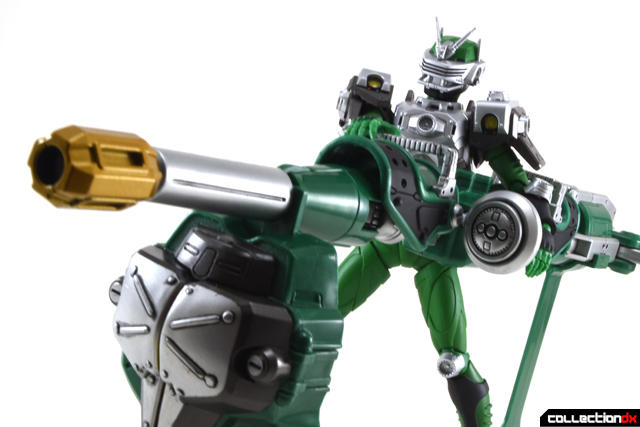 So as we have now seen that Magnugiga is one big collection of weaponry.  Because of this, Zolda is able to fire off every bit of ammo this big buffalo is storing by unleashing its Final Vent, “End of the World”. 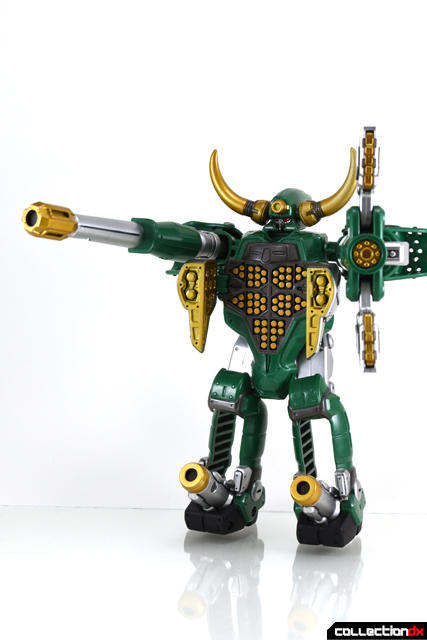 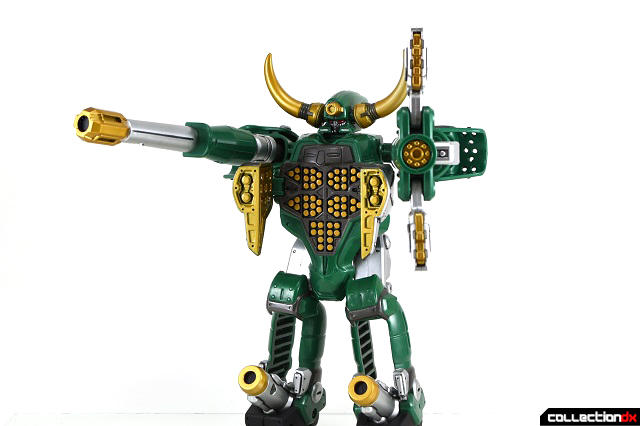 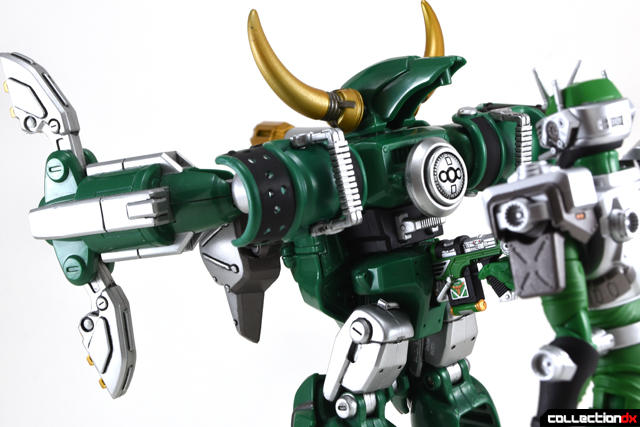 Also, the size differences between the lines once again made this scene look a smidge less impressive. Part of the splendor of Magnugiga’s final attack is due to the massive Mirror Monster's imposing size. With Souchaku Henshin Magnugiga being in a slightly smaller scale a bit of the awe-inspiring nature of the attack is lost. 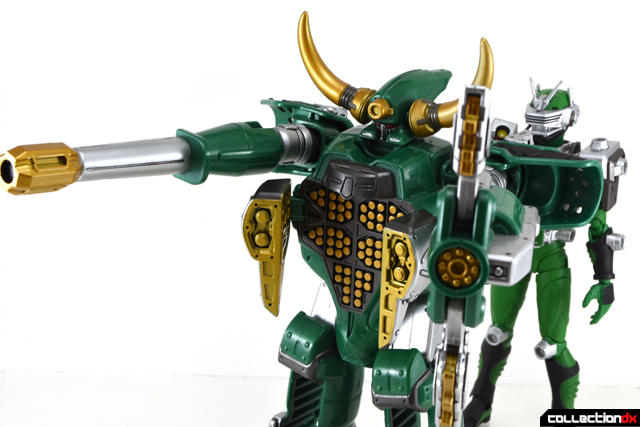 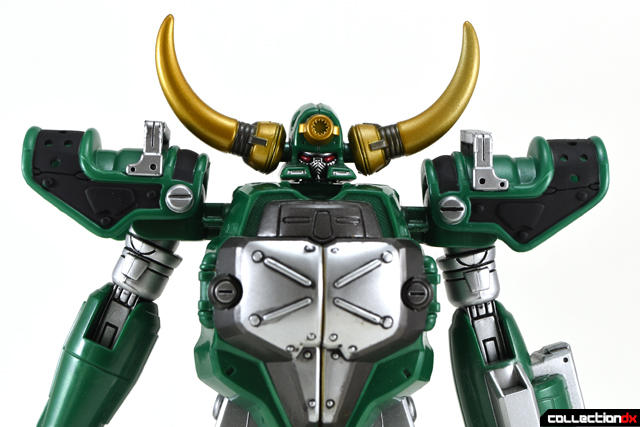 The Souchaku Henshin Magnugiga is a great toy from the mid 2000’s. It was definitely worth the price of admission at the time. For 5,500 Yen, you got Magnugiga, Dragredder and Volcancer; two prominent Mirror Monsters and that one throw-away monster that appears in an episode or two. But this set worth seeking out nowadays? The last time I saw a set for sale, it was going for over $100. Which is not what I paid for mine. I managed to get one for a little under the original retail price. So I am okay with what I paid for it, since I got a Magnugiga and Volcancer; the latter being a Mirror Monster that will probably never be released in the S.H. Figuarts line, regardless of the prototype that surfaced a while back.  But at the end of my time with the Souchaku Magnugiga, I can’t shake the feeling of wanting a proper S.H. Figuarts version. After all, almost a decade separates the releases and Bandai’s action figures have come a long with in that time. 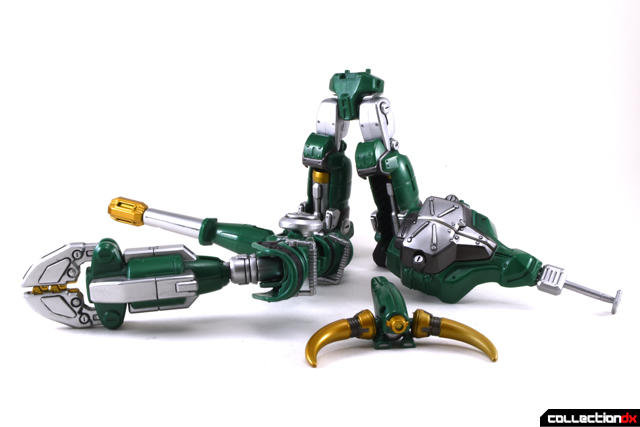 Wow, you really upped your photography game! These look great. Is this identical to the R+M version? I had the R+M Magnugiga/Zolda and it seems like the same figure.

Thanks! I've been work on getting a good white balance on my pics. From what I have seen, this does appear to be the same as the Magnugiga from the Rider and Monster version.

Just so you know, The S.H. Figuarts version does in fact break down into all its separate components as well.

Huh. How about that. All of the promo pics I saw for it didn't show that it was able to break down into the weapons. I thought that is why they included them with Zolda.