Masterpiece King Exkaiser is a great figure on its own. Masterpiece Dragon Kaiser is slightly less so, but makes up for it with sheer shelf presence. Together, however, they form Great Exkaiser, and your display shelf will never be the same again.

To give some context, traditionally every Brave show from Exkaiser to Dagwon had several recurring robot team motifs, chief among them being that the main character would gain a second robot after his first one gets wrecked. A few episodes later, the first robot would return to combine with the second robot and form the show’s ultimate Brave. Takara has recreated this awesome combination stunningly in toy form for Great Exkaiser.

Preparing King Exkaiser for combining is simple. Remove the head, lower the wings, swivel the feet into the legs, flatten the hinged backpack panels, and put the hands in an upwards muscle flex pose. 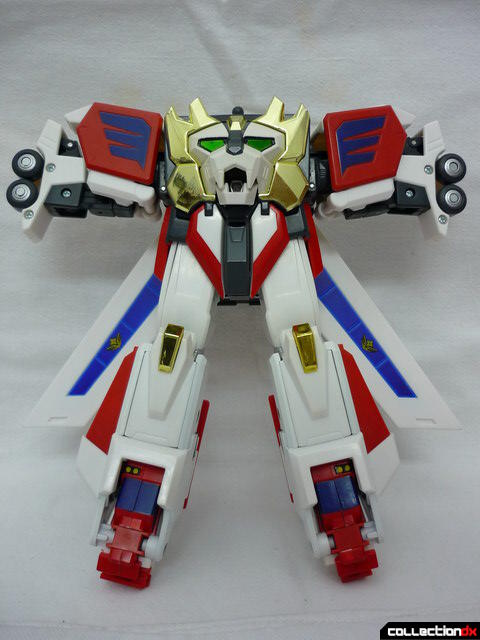 Moving to Dragon Kaiser, the figure itself splits into six major components. The head is stored inside the Dragon Jet’s nose cone, which also houses the head of Great Exkaiser. This is taken out and replaced with King Exkaiser’s head. 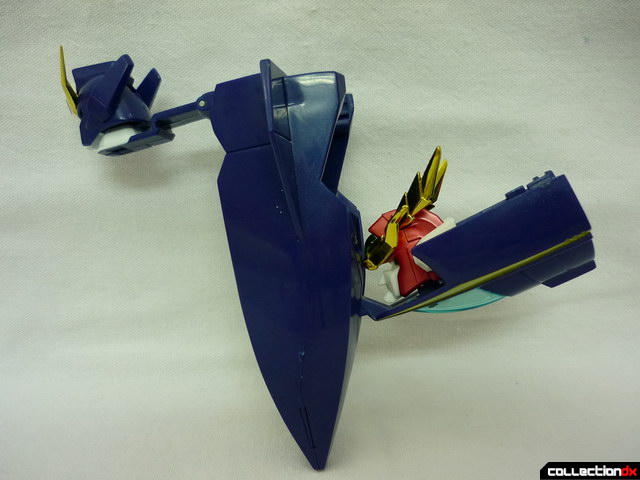 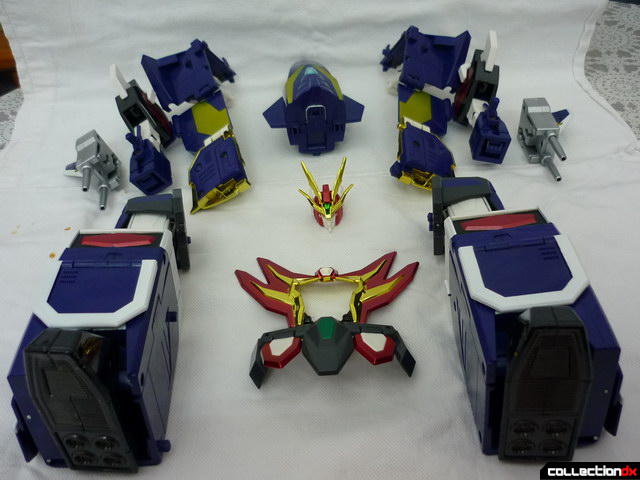 Dragon Kaiser’s upper torso splits into two pieces that form Great Exkaiser’s shoulders and arms. The arm needs to be swung 180 degrees over the shoulder joint, which shares King Exkaiser’s stiff locking tabs. A sliding switch lets you bring out the hands. 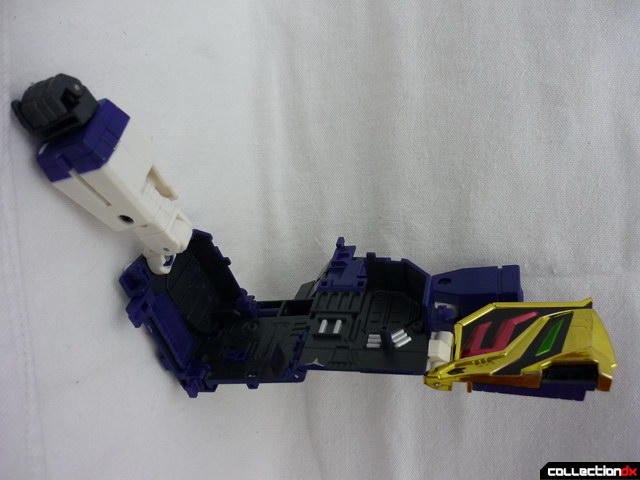 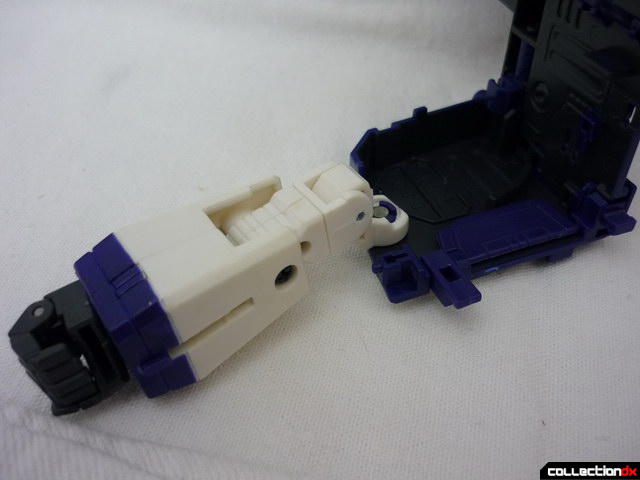 The hole that holds Dragon Kaiser’s Dragon Claws can be swung over and downwards to keep the claws from sticking out of King Exkaiser’s back. 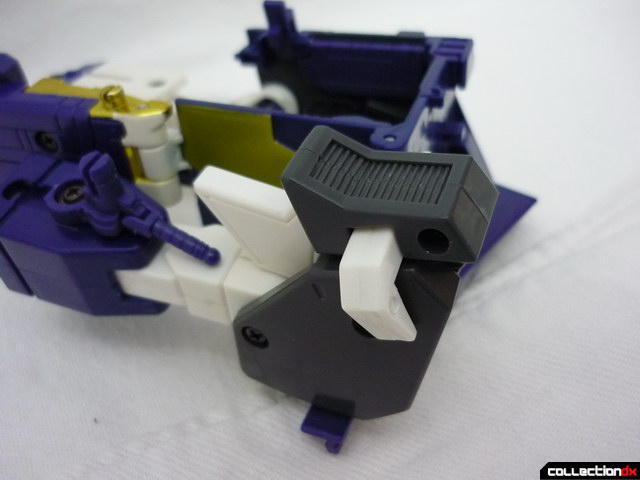 Dragon Kaiser’s lower torso splits at the hip. Each thigh and hip assembly can collapse into the hollow leg blocks. 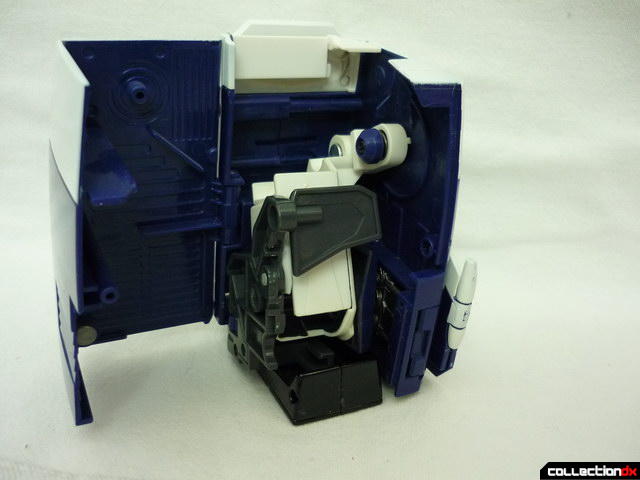 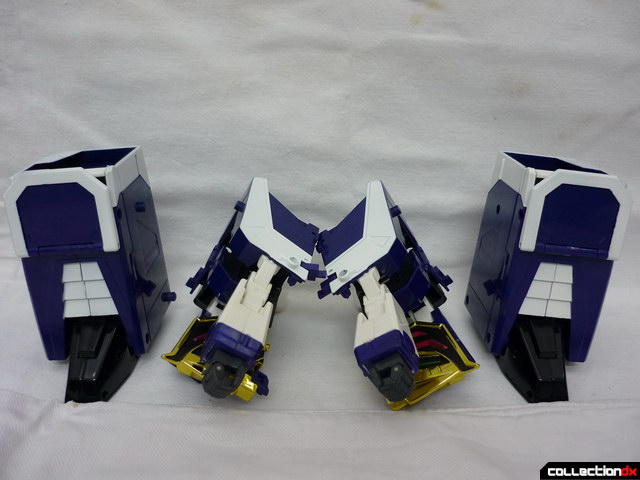 The completed pieces attach to King Exkaiser’s shoulders, legs, chest and back. The chest piece in particular is a pain because you have to stick a loose-fitting tab on the top of the lion head and then slide a peg into a hole below its mouth, all while trying not to push the lion head inside the chest.

The resulting figure is beautiful chunk of heavy plastic and metal. 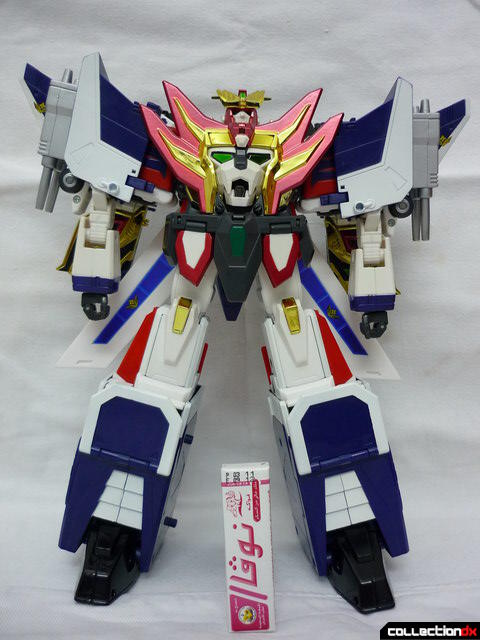 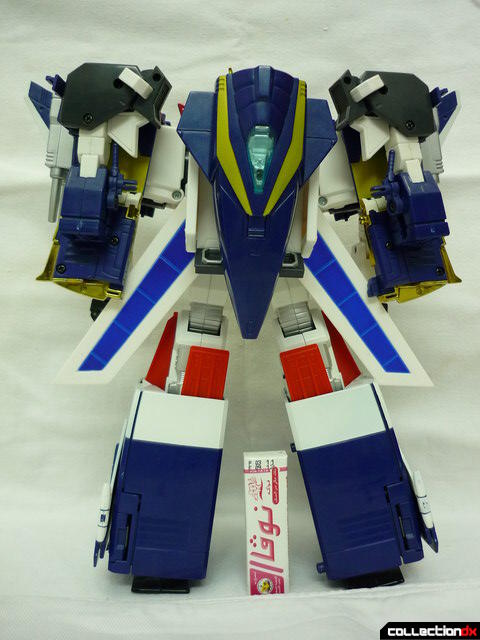 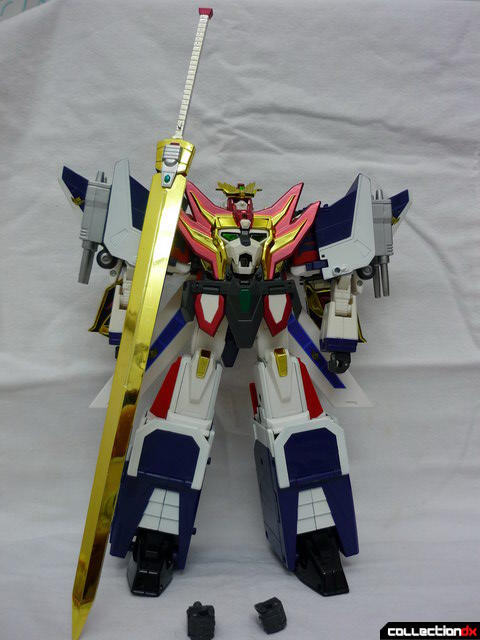 Great Exkaiser’s joints benefit from most of King Exkaiser’s articulation. The arms can’t spread sideways too much, but otherwise go everywhere else just fine. Unfortunately, due to all the junk crammed into the leg blocks, Dragon Kaiser’s feet lost some of their free range movement, but it’s not a huge hindrance. 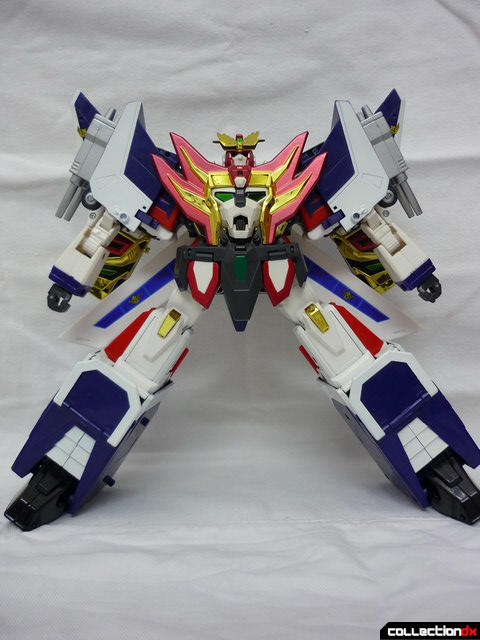 Like King Exkaiser, the head has a removable face plate. 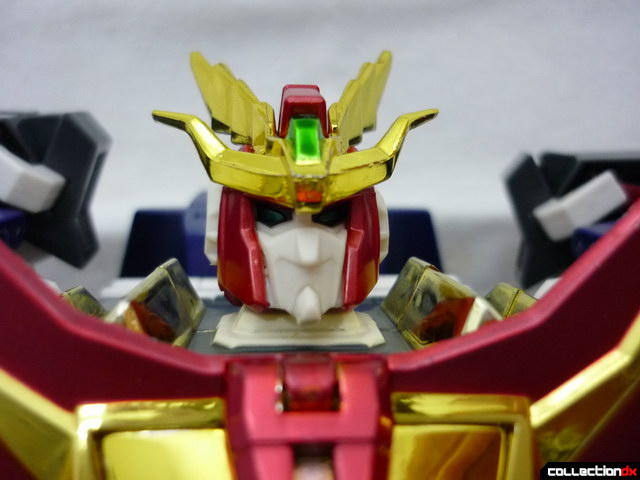 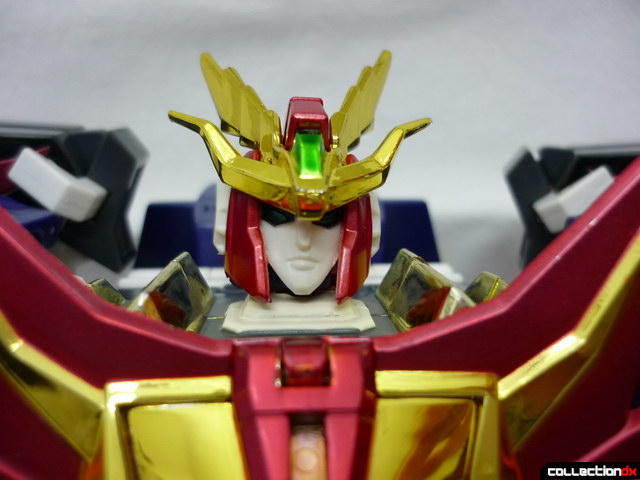 You’ve probably noticed by now that Dragon Kaiser’s arms are now unflattering kibble hanging on the back of Great Exkaiser’s shoulders, and covered by the two halves of the former’s chest crest. While the creative among you can have fun making four-armed poses, the extra limbs weigh down the shoulders, and the chest crest pieces tend to get obstructed by the lowered wings when moving the arms around. It’s not the fault of the toy though, since in the show the extra arms kind of just magically disappear during the combination sequence. Fret not, however, as Takara has provided an alternative. You can recreate the figure’s more anime accurate look by simply removing the extra arms from their ball joints and swinging the exposed panels back into the shoulder assembly. 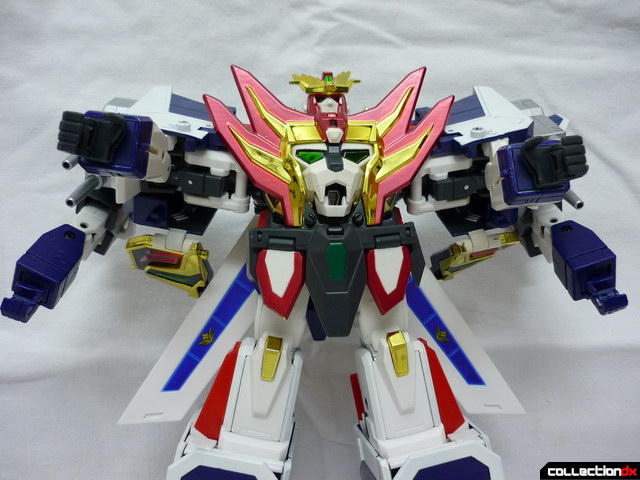 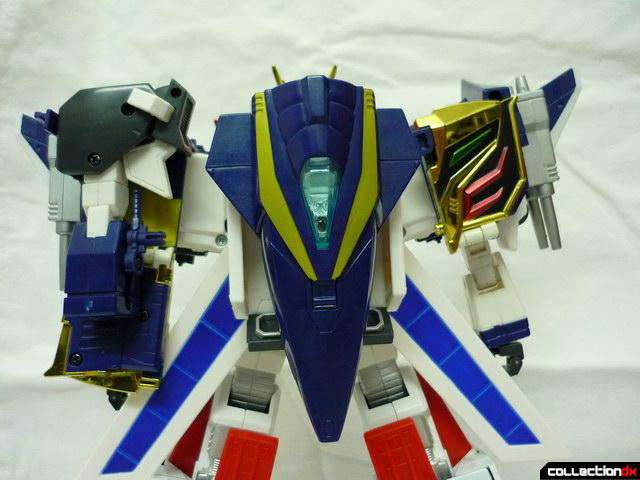 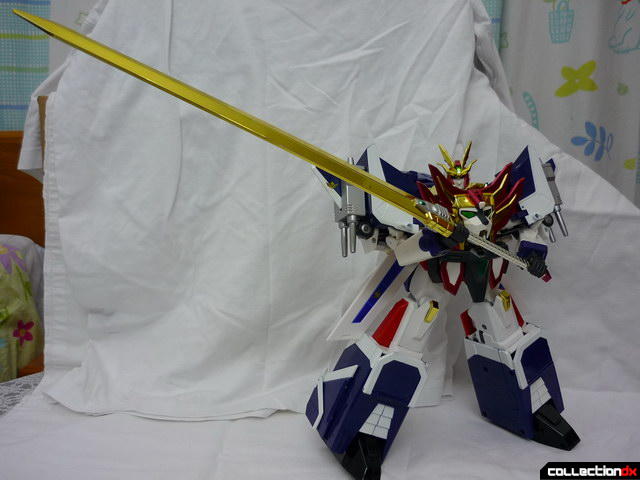 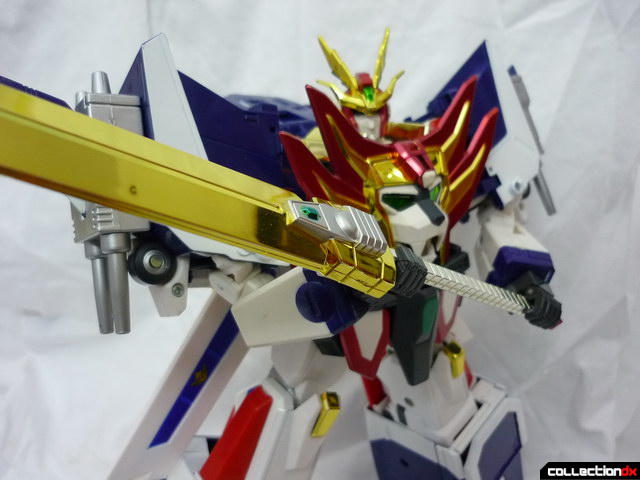 This crazy thing measures just over 40cm long. It easily dwarfs most other toy swords. Here it is in comparison to the first Kaiser Sword and the Master Grade 1/100 Destiny Gundam’s Anti-Ship Sword. 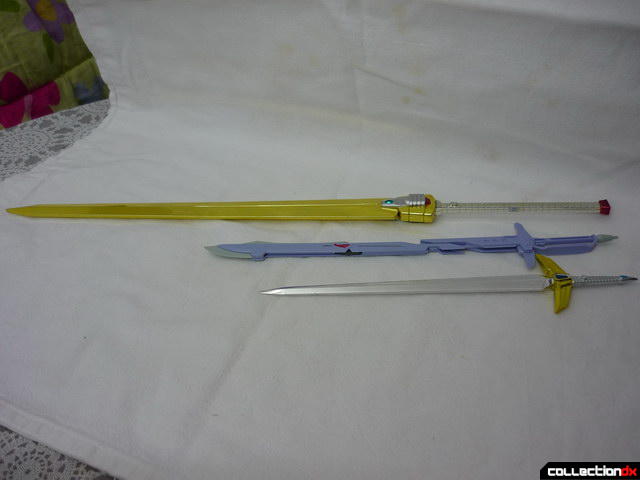 One thing to keep in mind though is that blade and the handle are two separate pieces that attach via a clip. I wasn’t able to cram the handle into the blade at first, because like with Dragon Kaiser’s bow, there was simply too much friction. I had to sand off the sides of the handle just to be able to slip it inside. At this point, however, I fear that I haven’t sanded the handle enough to allow easy separation, and attempting to pry them apart with tools will wreak havoc with the easily chipped paint job. If you plan on separating this thing to store it back in its tray make sure to experiment with the thickness of the handle before shoving it in. Yeah, that last sentence is going to sound very awkward out of context… 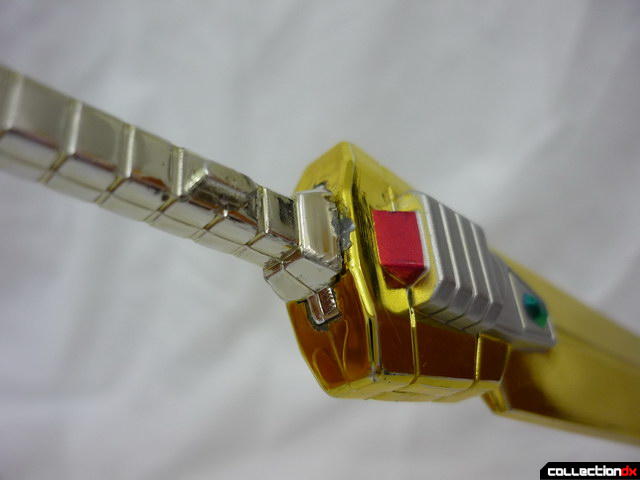 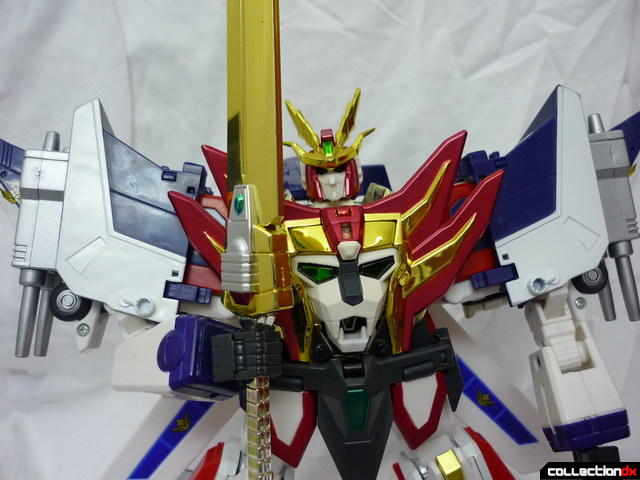 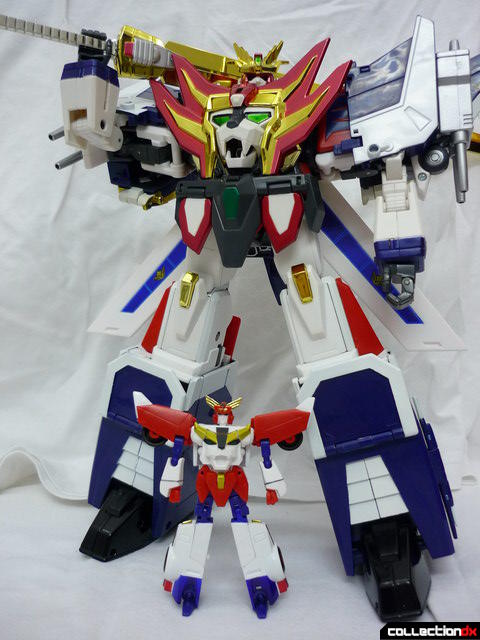 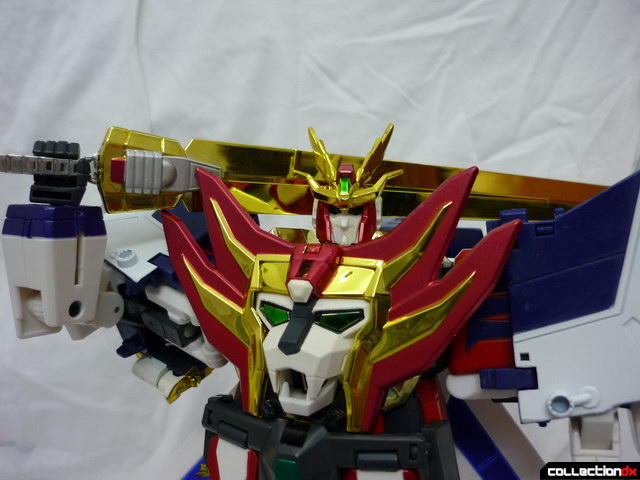 That’s it really. Two good looking figures combine into an amazing figure. ToysRUs had an exclusive release of this that packed both King Exkaiser and Dragon Kaiser into one huge box, along with a poster and an extra Kaiser Sword molded in the golden color of its powered up form used during King Exkaiser’s Thunder Flash attack. It’s super rare and super expensive, so if this review sparks you on a crusade to find this toy, then steel your soul for the horrors that await you.

2 comments posted
I must have

The dragon Kaiser... my Exkaizer seems feels uncomplete without it.

Half of the leaders get new replacement vehicles but the other half has sentient partners that combine with them (which is FAR more interesting).