In Task 07- “The Scale of the Salamander”, a Jaryuu Clan monster was on the verge of a magnified meltdown. To contain the explosion and defuse the situation, the Boukenger called on the quick curing concrete of Gougou Mixer. Gougou Vehicle #8’s debut was fairly easy, and required little effort. Using materials dug up onsite by DaiBouken’s Gou Scooper, the Hyper Concrete mix was enough to contain the explosion. Its second battle, in Task 08- “The Atlantean Treasure”, was a little more complex. A Precious which could mimic anything, created dozens of copies of Bouken Blue. However, the real Bouken Blue used Gougou Mixer to smash through them and catch them all in a carpet of Hyper Concrete. So far, it is the only auxiliary Gougou Vehicle to be equipped with offensive lasers for when it operates alone. When launched from the Sargess mecha bay, Gougou Mixer emerges from behind a waterfall, catching water in its rotating drum to be used for when it arrives on the battlefield. 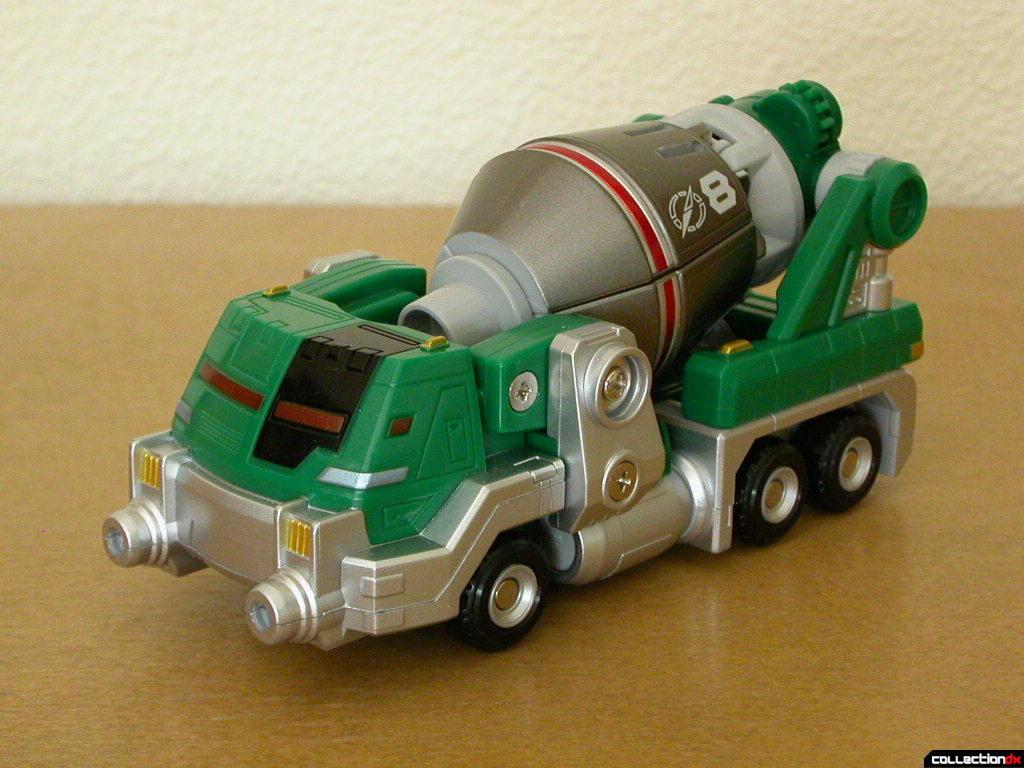 Gougou Mixer (back) continues as the third Gougou Gattai Vehicle in “Boukenger”, dressed in a comfortable if somewhat unusual green plastic coloring. Unlike Gougou Gattai Vehicle #1 - Gougou Drill, Gougou Mixer’s cylindrical concrete mixing drum cannot rotate on its own when rolled across a smooth, flat surface. Instead, a small green gear can be spun, which turns the drum; this constitutes the special feature of this toy when used alone. The drum can be rotated upwards, but this is really only for the purpose of transformation. The six black tires, like Gougou Dump’s from the DX Gougou Gattai DaiBouken, are made of PVC, and actually ‘grip’ the flat surface a little. The two laser cannons, mentioned above, are molded into the front bumper; though they do not fire, of course. Like Gougou Drill before it, there are a few small cautionary lights placed on it which are painted gold.

Gougou Mixer, function wise, is pretty simple when it’s alone. It looks kinda cool and has nice details as always, but it doesn’t really do that much. At least Gougou Drill had the tractor tread which could rotate around. The rubber PVC tires are a plus, as is the rotating drum feature. It does have qualities that need further explanation to show off its value, but it’s a fair thing to get.

To provide enough power to shoot the concrete from far away at the overloading Jaryuu Clan monster, the Boukenger combined Gougou Mixer with their lead mecha to form DaiBouken Mixer. Activating its new left arm, the spinning concrete drum suddenly splits open like three flower petals, and uses its Wall Shoot technique to douse the flames and cover the monster in special fast-hardening Hyper Concrete. 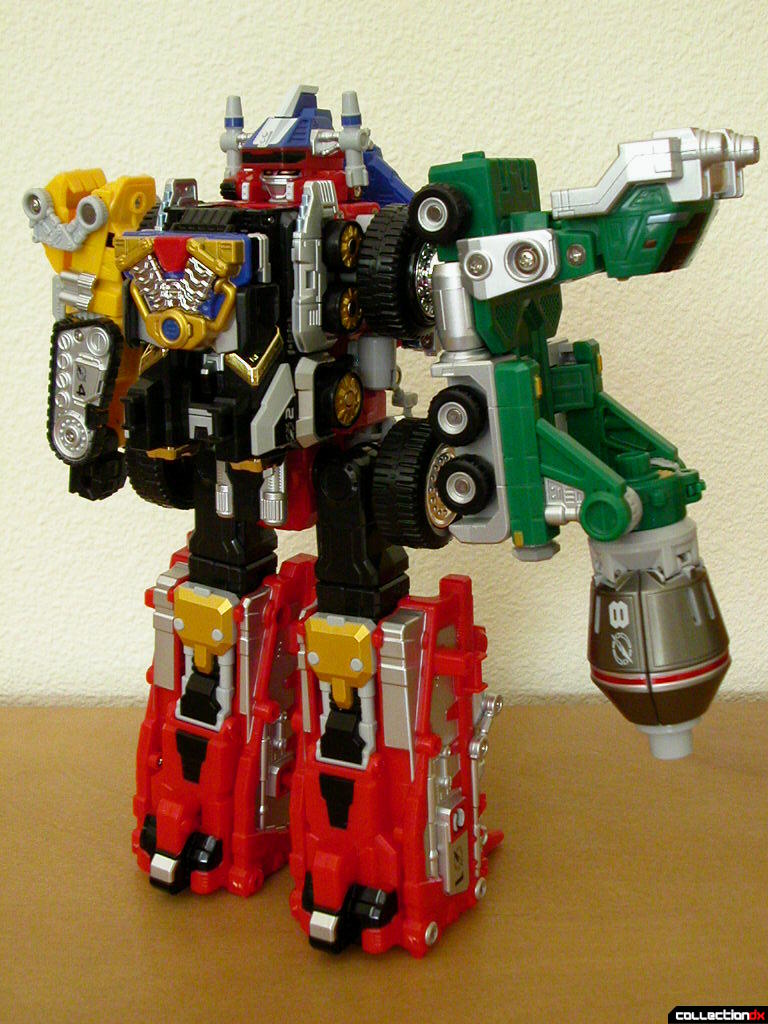 DaiBouken Mixer (back) like DaiBouken Shovel, swaps out Gougou Marine Diver once more for its combination. However, what replaces it isn’t much better. The left arm of DaiBouken Mixer is a contorted green and silver super arm with a big dark gray pod at the end. (Personally, I tend to think the pod is mounted to the ‘wrist’ like a giant cannon.) The really cool part of Gougou Mixer happens when a green button on the top of the pod is depressed, and the pod springs open like a flower! The three-petal cannon can still spin around via the small green gears on the side. Finally- some decent firepower! A shame it can only shoot Hyper Concrete for its Wall Shoot attack... 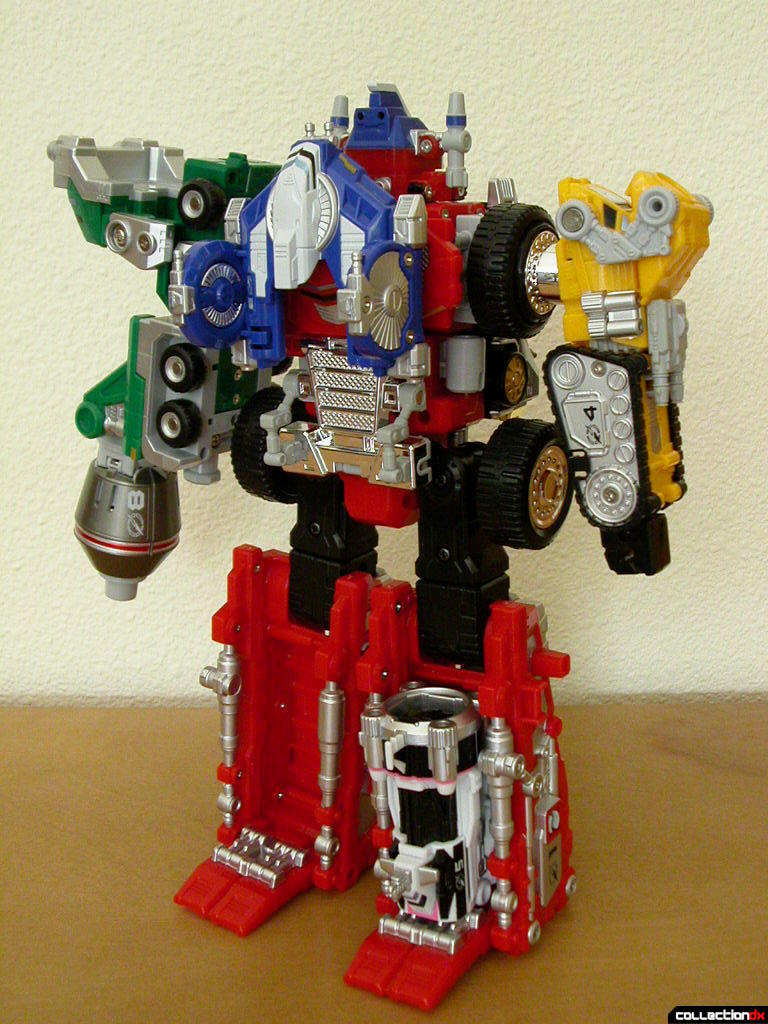 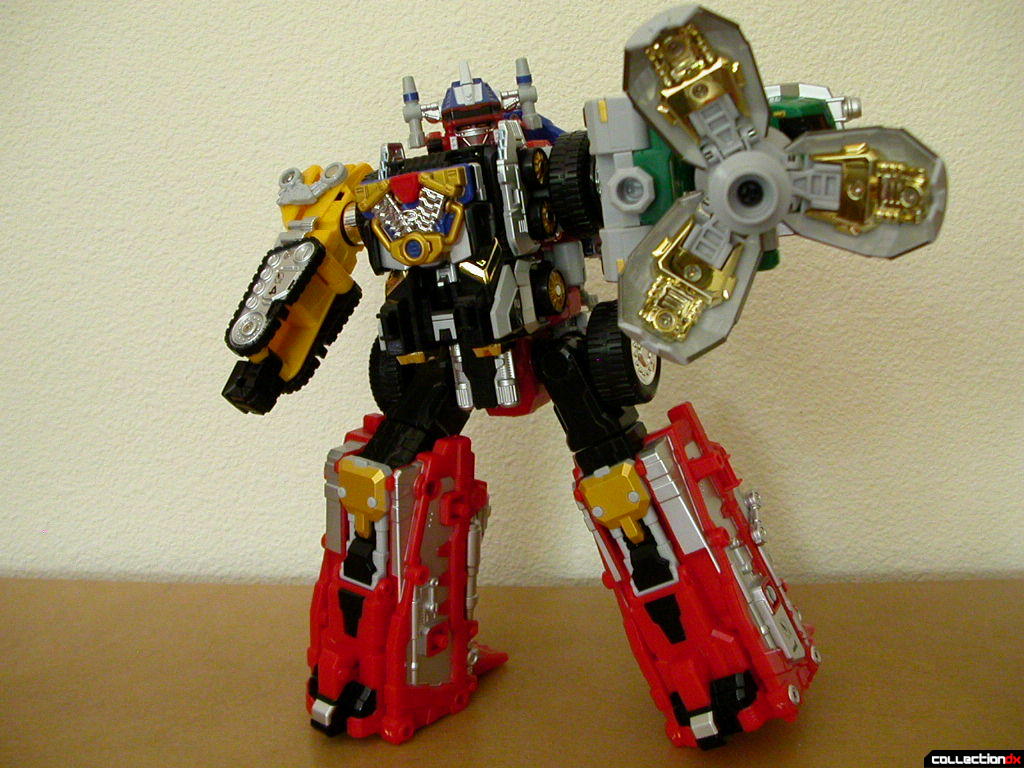 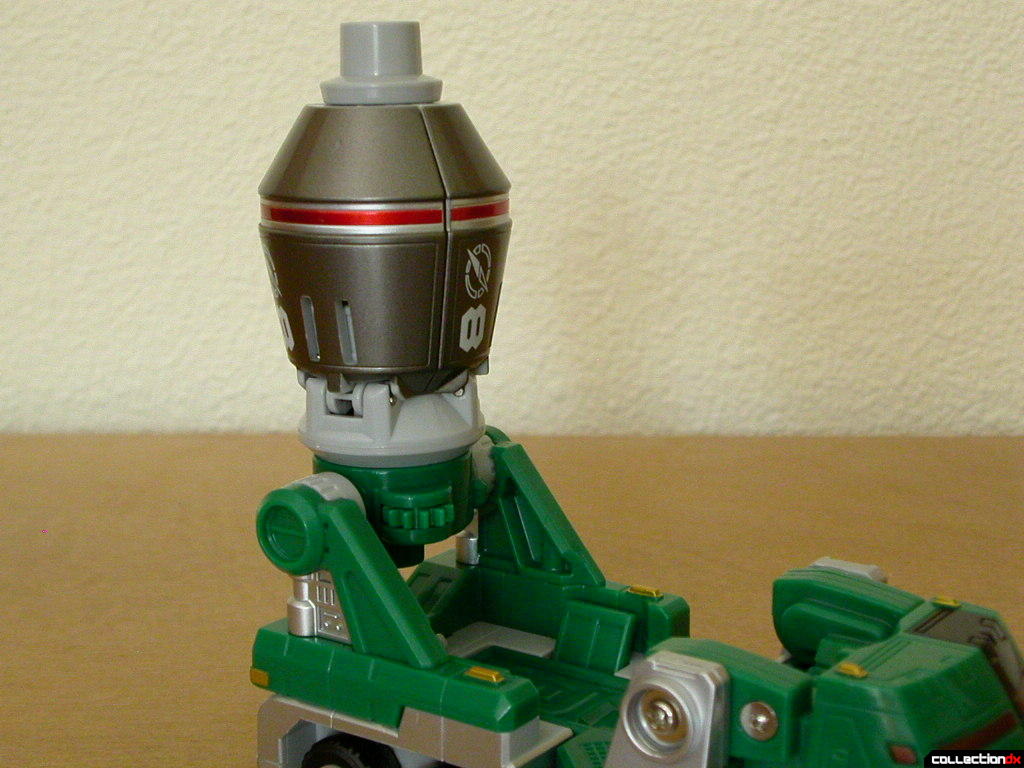 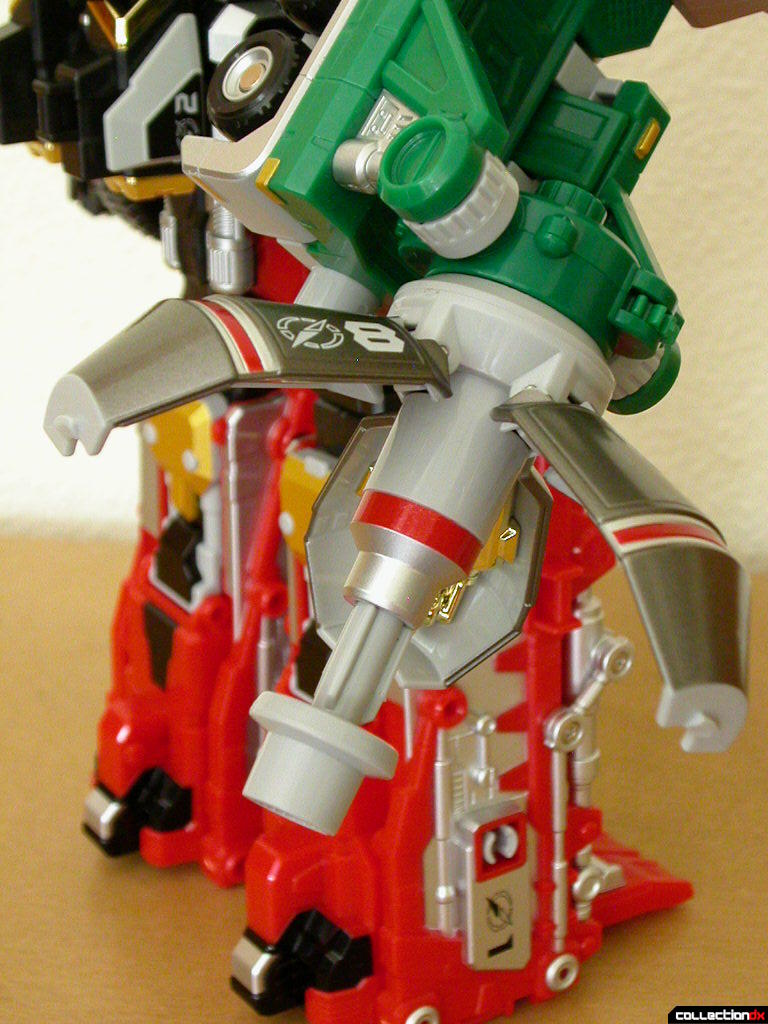 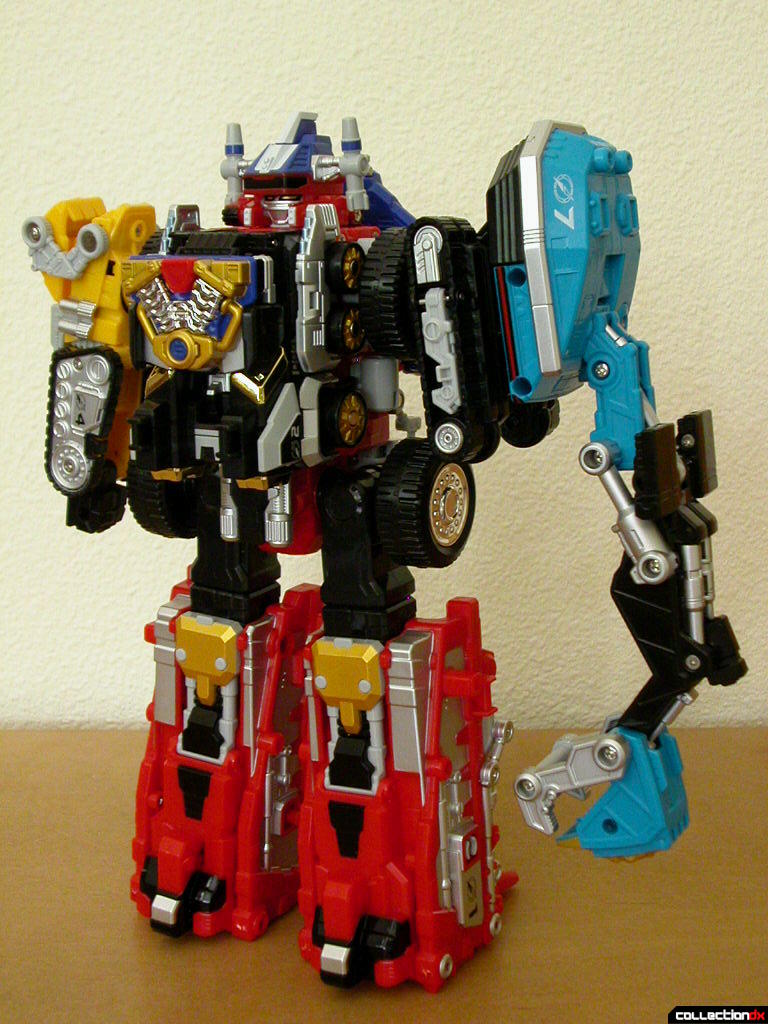 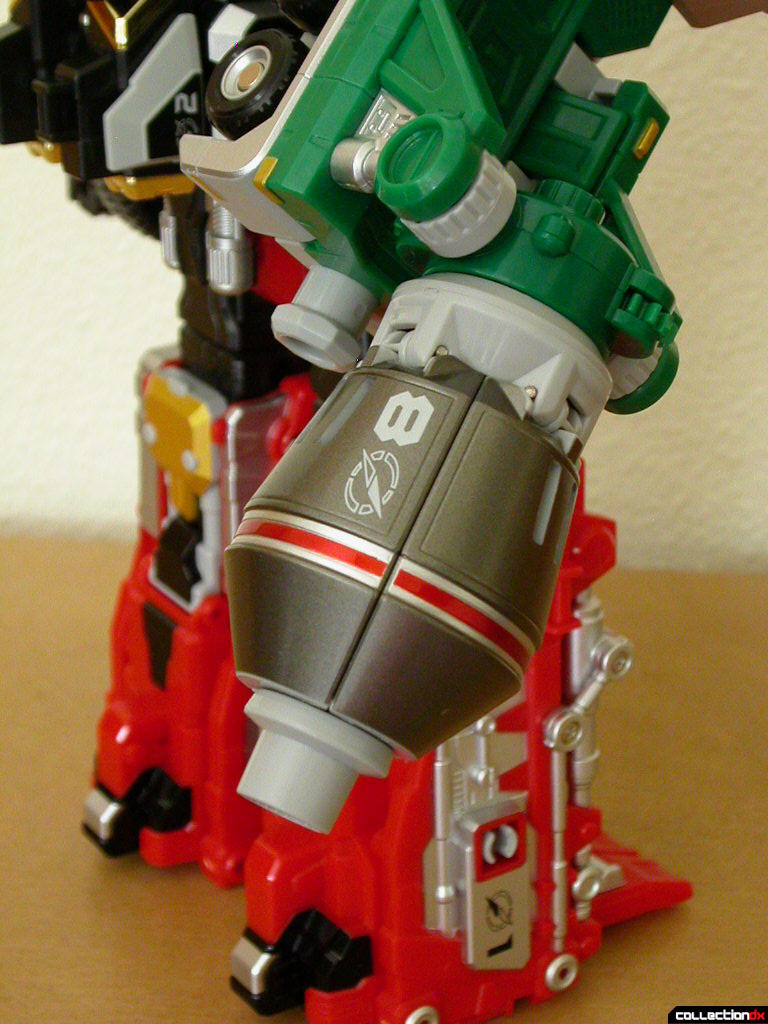 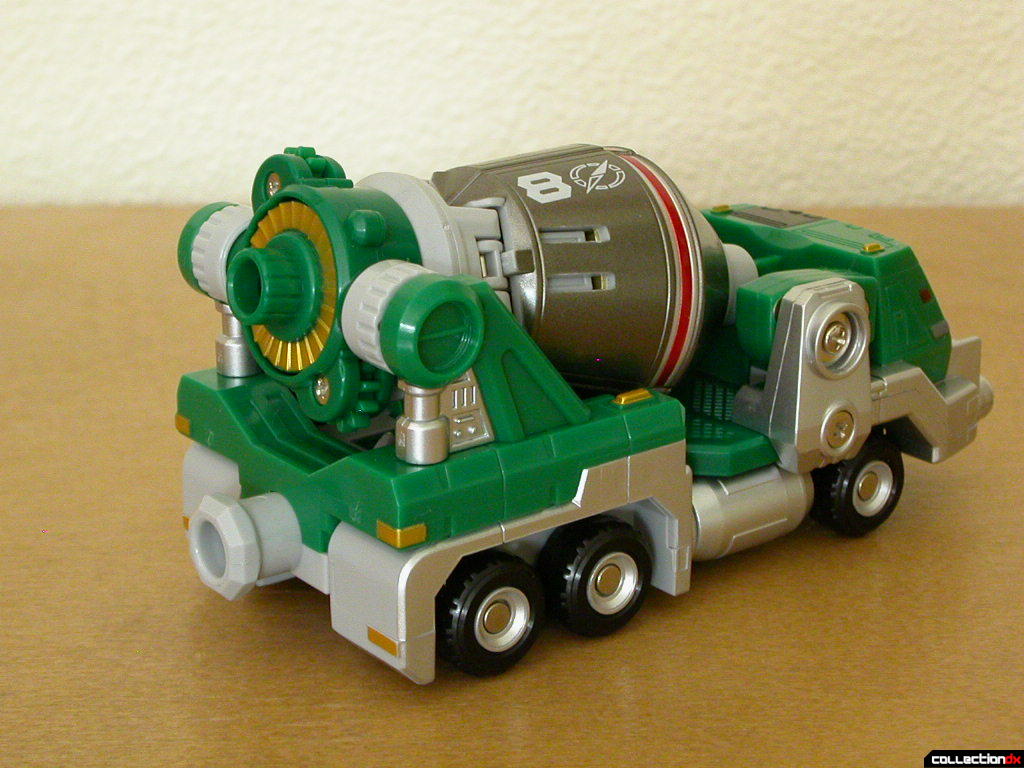 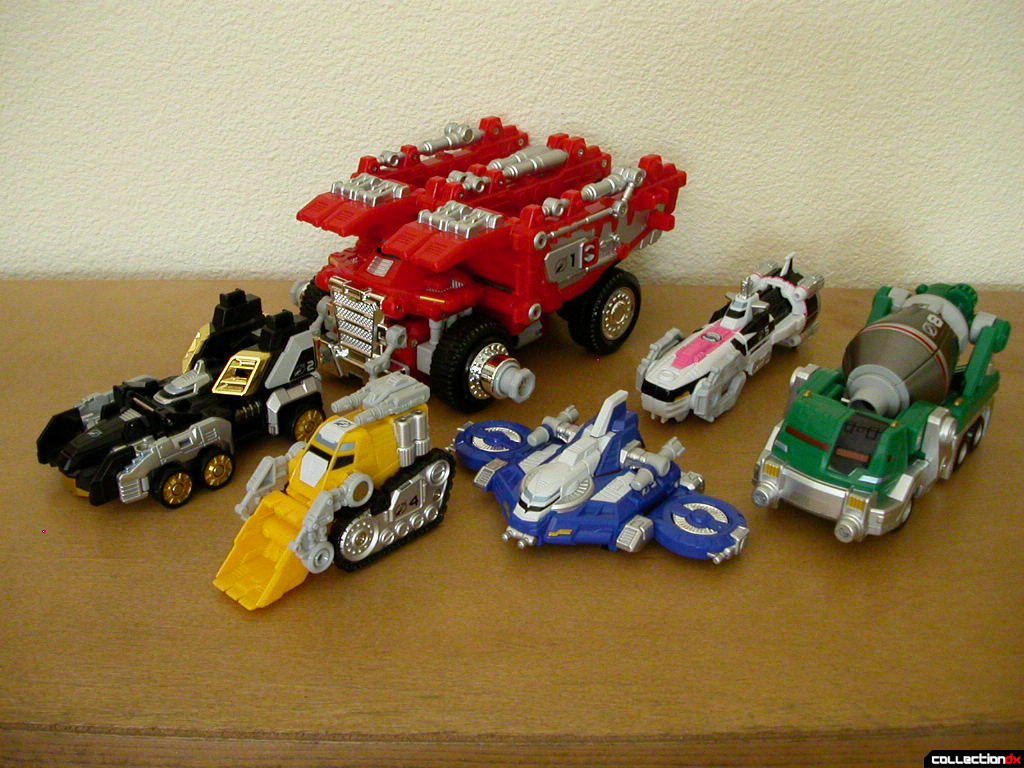 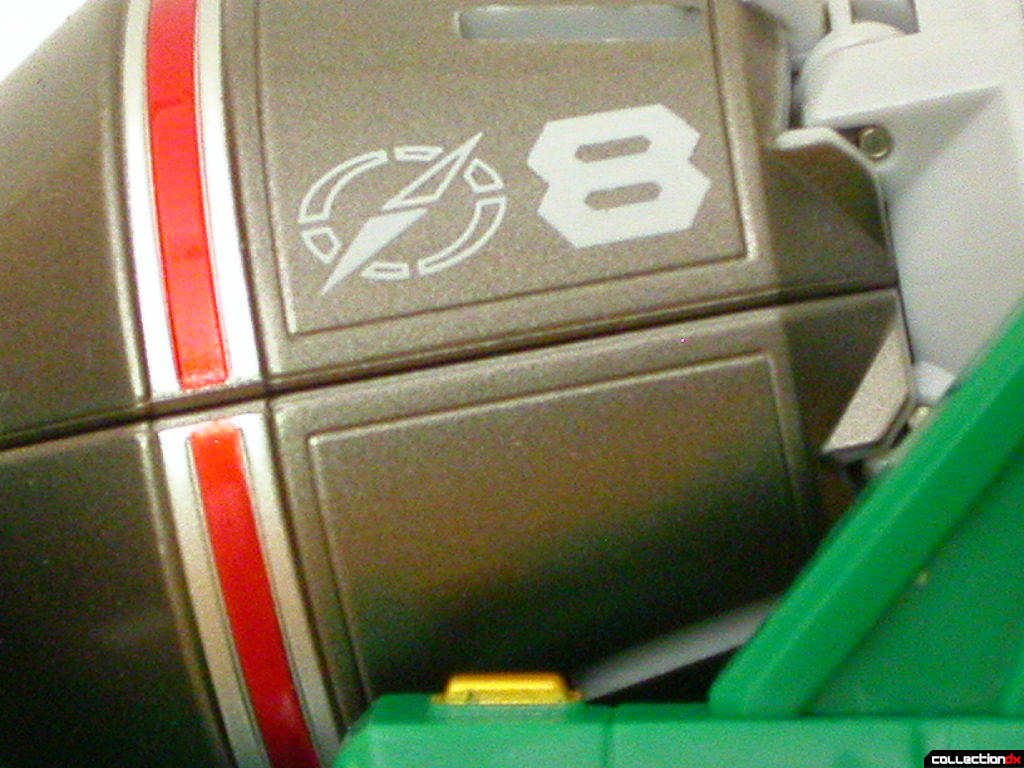 Does anyone knows what's the use of the little pegs/holes we can see under the cabin (on the piece that becomes top of shoulder on daibouken mixer/ under of the heel when forming daitanken) ?
I don't see any transformation that uses them, and I find nothing about that feature in the instructions (the gougou crane has the same !)
thanks !