The Gemini Cloth first appears in the Sanctuary storyline from the TV show and is truly a mysterious object with a life of its own when our heroes encounter it. Our heroes in this storyline must journey thru the Twelve Temples of the Zodiac to save Athena from the poison arrow that is slowly working its way to her heart. Each temple is supposed to be guarded by the Gold Saint associated with that Zodiac sign. 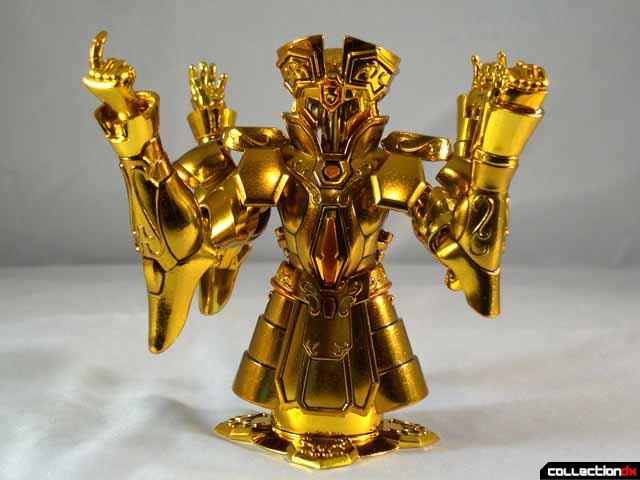 No one has seen any sign of Gemini Saga in many years, it’s a bit of a mystery and when our heroes enter the Gemini temple they are only greeted by the statue of the empty cloth. Soon the cloth comes to life and fights to defend the temple with seemingly no one wearing the suit. So here is where I spoil some of the mystery of the show so if your watching it and you haven’t gotten to the Temples of the Zodiac part of the story you may want to stop reading here….. 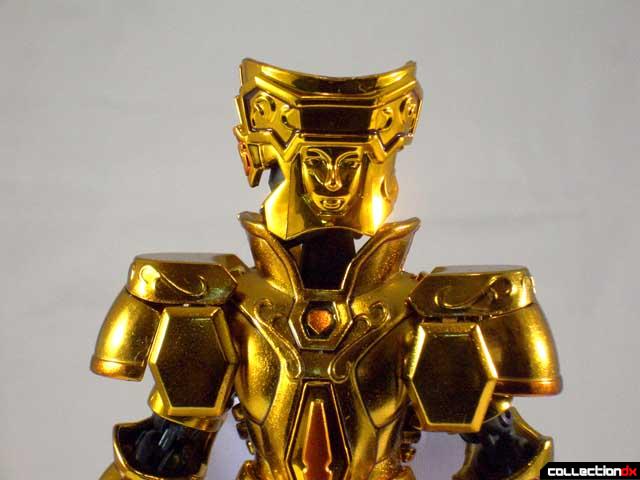 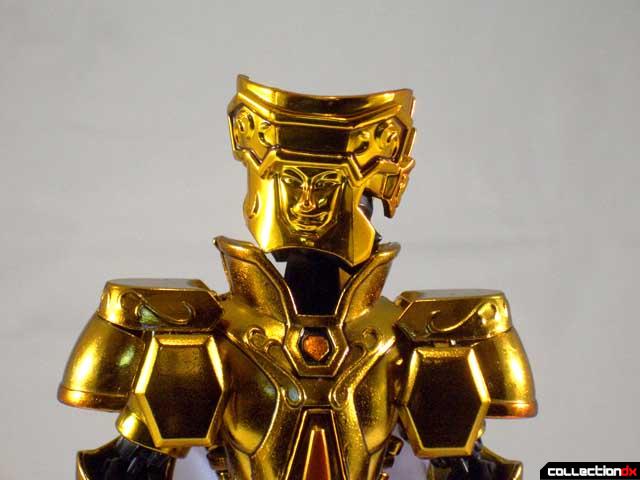 Gemini Saga suffers from a split personality, a good side (Saga) and a bad side (Aries). It was his dark side that started acting against Athena’s will and challenges our heroes. It’s this complex dynamic that makes for an impressively accessorized toy/collectible. 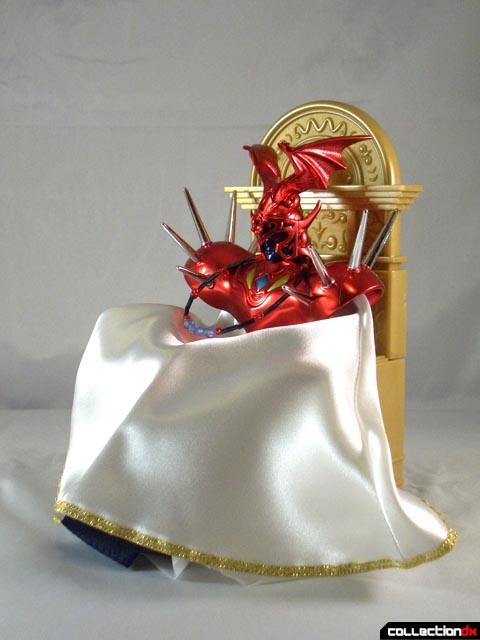 From wikipedia:
“The leader of the Sanctuary is Athena in her human reincarnation. But since Athena only descends down from Olympus as a human incarnation only once every roughly two hundred years, the charge was left mainly to the Pope, the highest rank of the Sanctuary, and her second in command, followed by 88 Saints and more soldiers.” 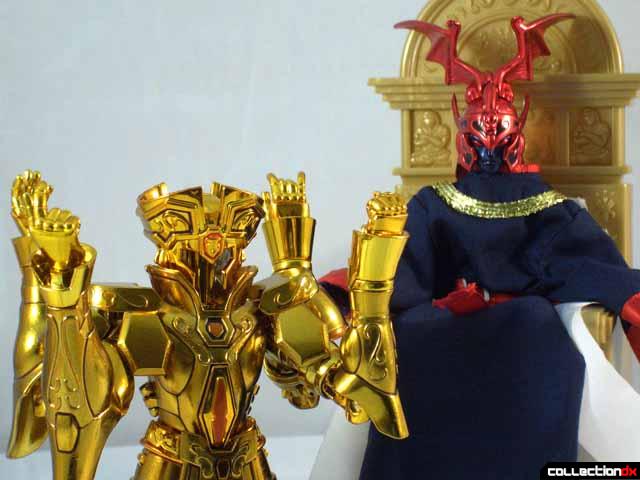 The man pulling the strings and responsible for every conflict our heroes have encountered up to this point in the series is Pope Aries. Aries assumed the title of Pope after he murdered his predecessor (Pope Sion); Aries it turns out is Gold Saint Gemini who disappeared years before. 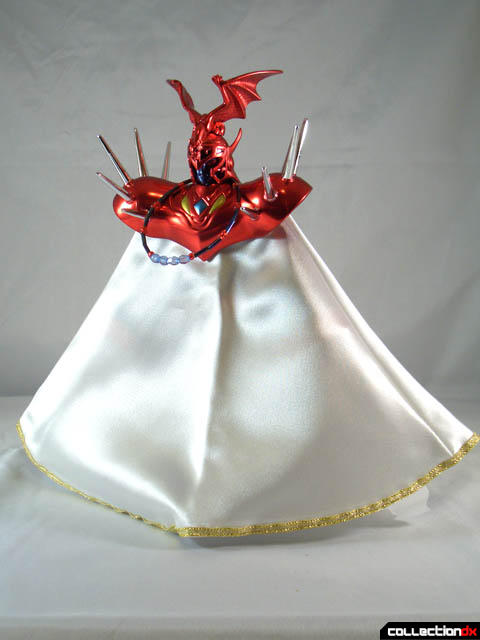 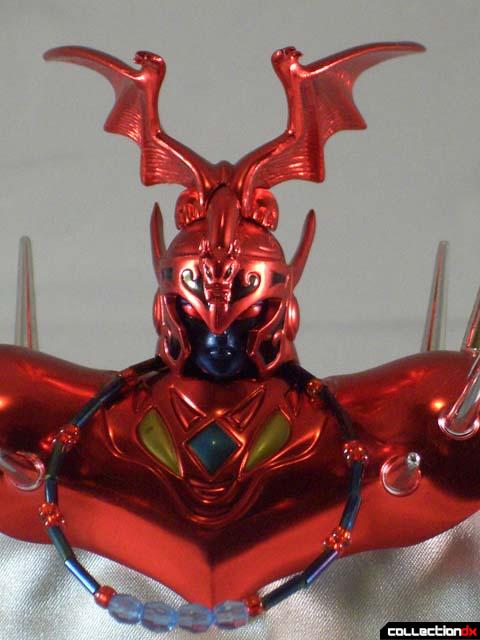 Pope Aries made for a memorable villain and was a major part of the drama of the series so I am glad Bandai gave us the parts and pieces to adequately display the villain with all of his tools of manipulation in all the stages of his personality and not just the Gold cloth of Gemini. 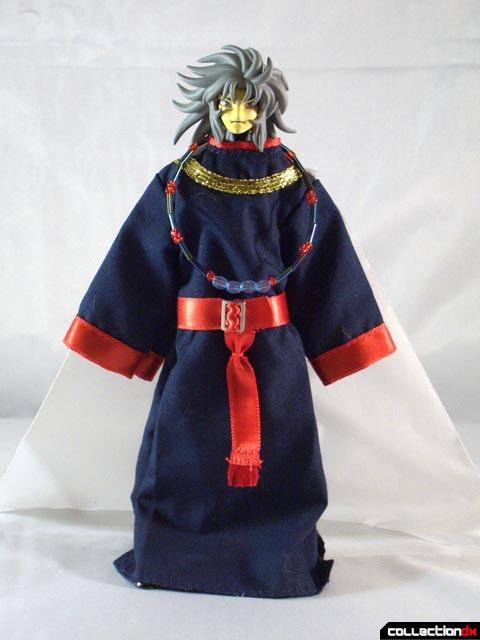 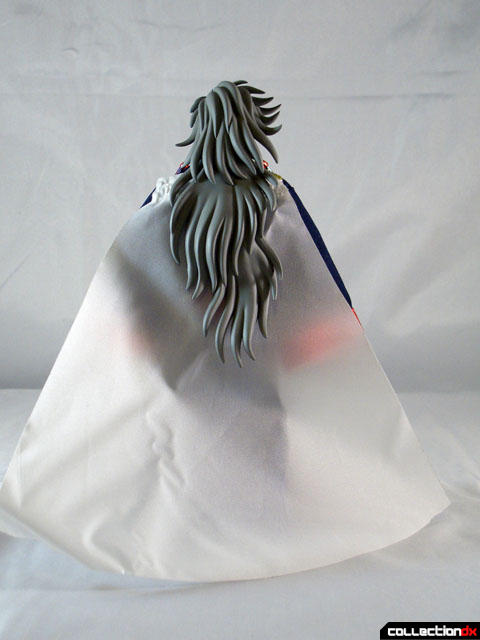 In the anime series when Saga is overcome by his evil side his eyes turn red and hair to grey. So Bandai includes the alternate hair and head which can be swapped out for the all black head to make the Gemini Cloth appear empty. 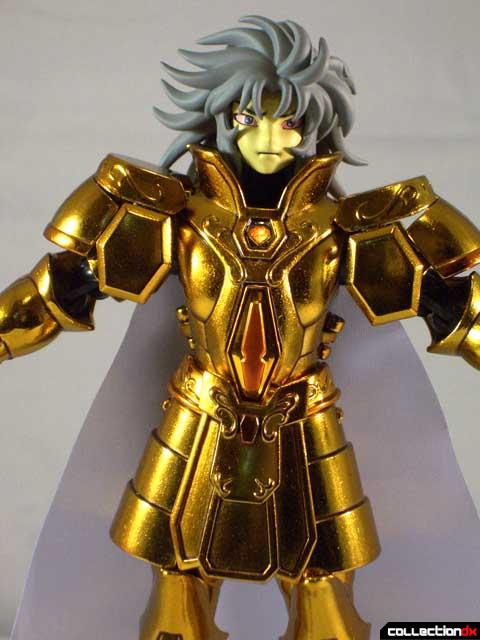 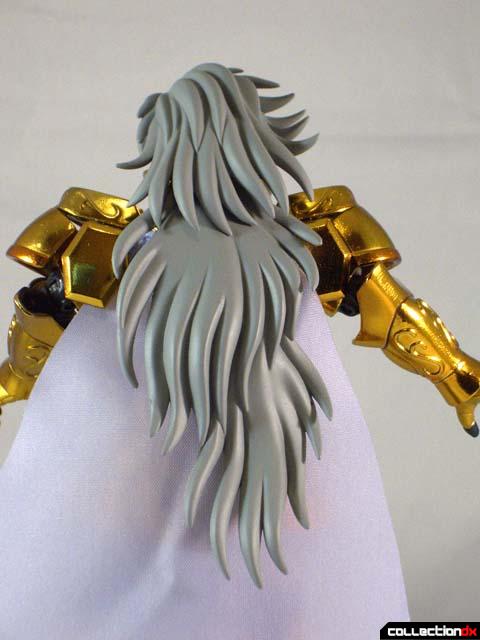 The alternate body included for Evil Saga is all black as well so the suit appears to have no one in it. 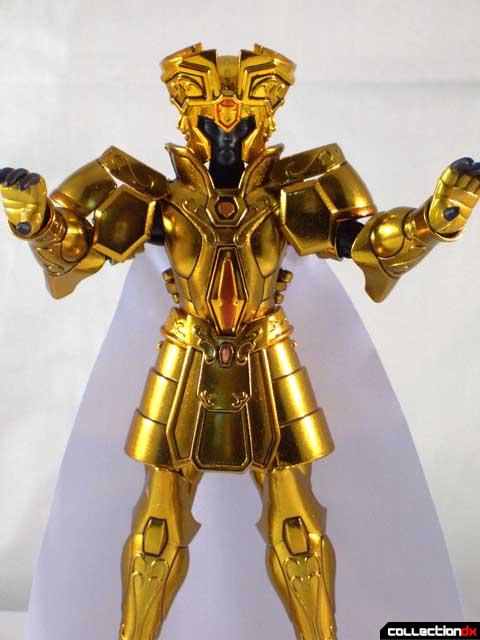 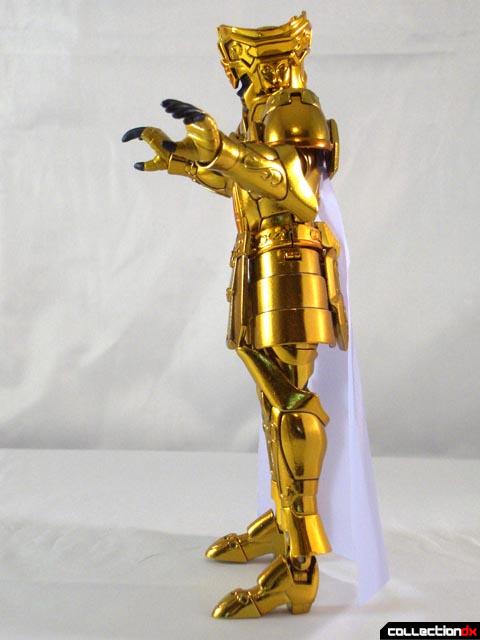 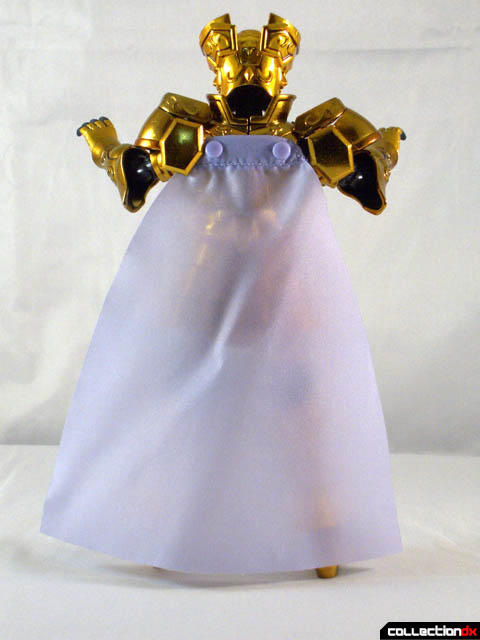 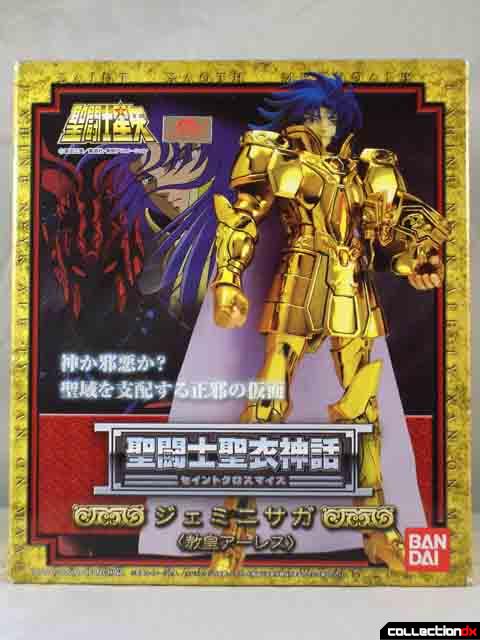 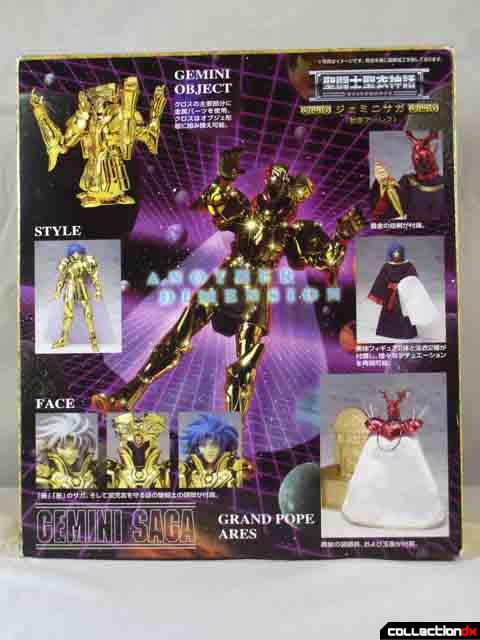 Gemini Saga comes in the usual Saint Cloth Myth book style package but it is noticeably thicker than previous releases because this set is loaded with extras since it is two characters in the box. Almost the entire Gemini Cloth is diecast with only the small "belt" on the side of the suit and the helmet being plastic. 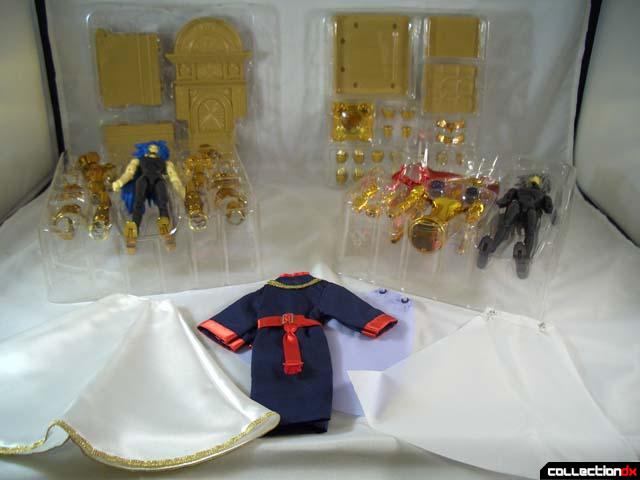 And of course, let’s not forget that once upon a time Athena did indeed choose Saga to wear the Gemini Cloth and they do indeed include the “good” version of Saga’s head and regular blue hair. 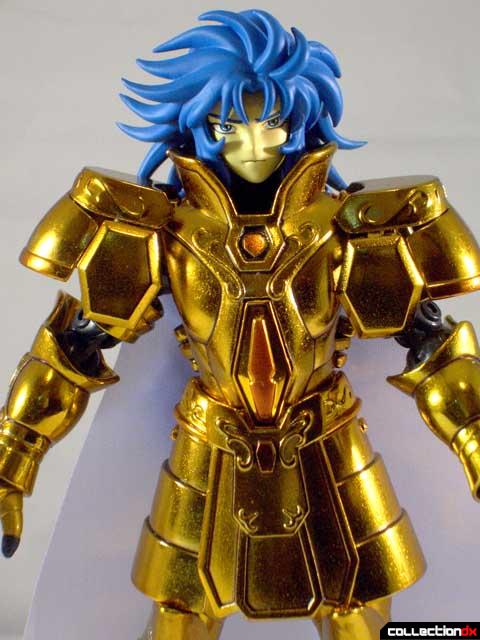 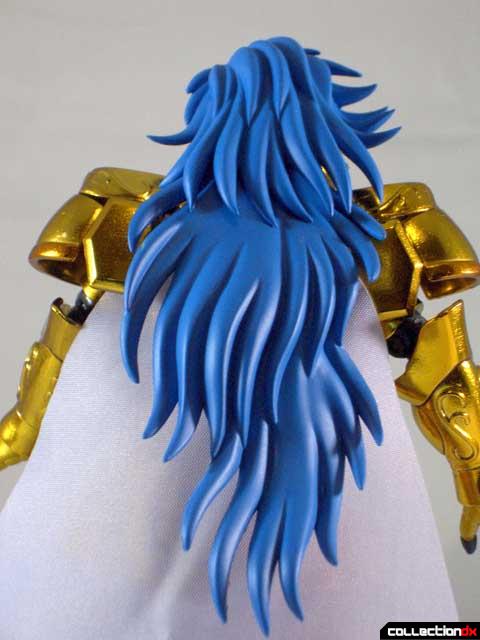 The Throne was a particularly nice touch as is the diecast dagger included (so you to can re-enact the assassination attempt of Athena.) 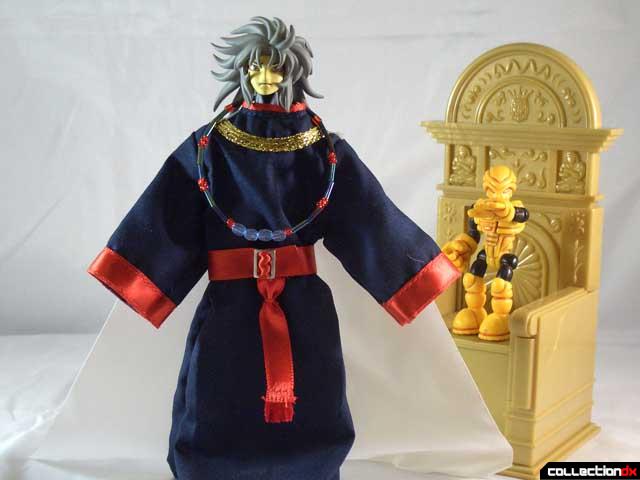 I’ve said it before and I’ll say it again, it’s the little attention to detail that Bandai gives to this line that makes it a fan favorite. If you haven't tried a Saint Cloth Myth figure you should, they are a quality collectible and well worth the cash. 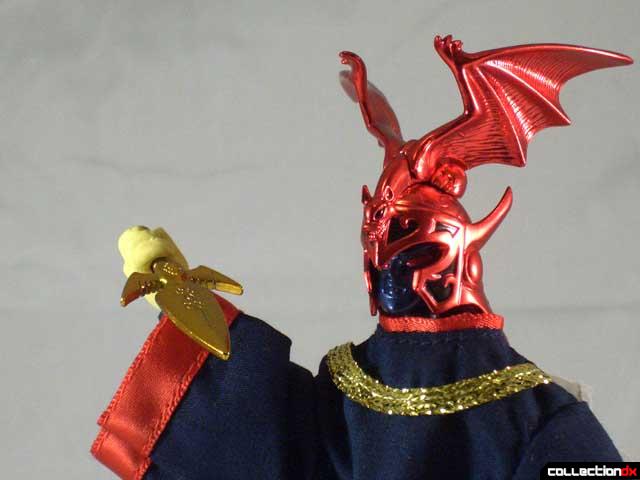 And lastly I have included a video review as well...

7 comments posted
One of the reasons why I

One of the reasons why I like this cloth so much is because it covers the entire body of the wearer.

Man, that review was awesome, also Geminis was a really great character. My brother used to have the old 1988 toy. I should get him this one for his birthday.

Hi, thanks for your review. I've taken sort of an interest in the Saint Seiya line, and this set looks nice. Though I wonder how the PVC figure holds up due to the weight of the diecast armor, does it warp the figure over time?

When you say brought to you by one of your sponsors (Angolz in this case), what does that mean? Did they provide it free for review purposes or did you just happe nto buy it from them?

That brings up a general question about all the reviews from sposors like betatoys and Sideshow.

I think you should specify when a toy is provided gratis for review and when you paid for for it out of pocket (tax write offs is another matter).

I want to know when you liked the toy so much you paid for it, regardless of it being review material. There have been a few items in the past that just felt like they were reviewed for advertising purposes, and not something Josh or others would have put down $100+ on for their own collection.

I guess we've never really talked about it publicly. CDX sponsorship is not exactly a *new* thing, but it's something that has changed over time, and each deal with each company is different. Sorta hard to keep track of sometimes!

Obviously, the Sponsors listed down the right side of the page are folks we've worked with before and when we click on those links, they help us pay for and maintain the site with ad revenue. In fact, what're you doing!? Go click those links now! :P

When we say directly in our reviews, "brought to you by _____", it usually means that, as an added courtesy, that company has offered us a discount on the toy, and even in some cases, provided it for free. We don't accept direct payment for reviews. Since, in most cases, we were going to review the particular toy anyway, we'll give them a little plug in return for the discount.

Of course, we're objective reviewers here...so even in cases where we've been given toys for free, we're not going to give favorable reviews automatically. Perfect example: Shocker's Metalocalpse "statues". Oy vey.

More to your point, though, we were provided with a free sample of Far East Monsters' DAM Godzilla statue, and while I'm not a statue collector, this thing really and truly blew me away. Like you mentioned, I probably wouldn't have bought this thing on my own because I'm not a statue guy, but I love Godzilla and it's not like I hate statues!

For example, I'm an underground hip hop head, so while you'd be an idiot to hire me to write country/western music reviews, that doesn't mean I can't comment on and, at least, intelligently review commercial rap like Jay-Z. ;) You dig?

All I'm getting at is that you'll never see me reviewing My Little Pony on this site...or anywhere! Despite statues not being my normal thing, I can take a step back from my usual stuff and try to be "objective" about the Goji statue. I found it to be a great piece based on my standards...and in the review, I explain why.

And, again, the fact that it arrived for free is good because, otherwise, I may never have gotten a chance to mess with one in person...but at the end of the day, it had no bearing on my actual opinion of it. If it sucked, I would've plainly said so.

Oh, and of course, variety in our reviews is a good thing, right? If we did the same crap over and over again, this site would get pretty boring!

Sanjeev pretty much nailed it. When you see links to a retailer in a review, that means that the toy has been provided for free or at a discount to the reviewer. One thing I make sure to mention to any sponsor is that sending a toy does not guarantee a good review. We promise to be objective, but if something stinks we're going to call it out.

We pride ourselves our our objectivity and our credibility.

If you read the site long enough, i think you can get a feel about which reviewer likes what and what they personally collect. If its one thing that working on this site has done it has definitely opened my eyes to some cool toys I wouldn't have bought otherwise. That Dog Alma statue is a perfect example. i don't collect Girl figures, but when it came in the box from Yamato I was really surprised about how nicely done it was. Am I going to go out and start collecting them? No. But would I check another one out? Sure.

I don't know if putting whether or not i personally bought something would be relevant to the review. Each person looks for different things in a toy, and I want the reader to make up their own mind on it. But rest assured, i'm not going to recommend a toy to you that i think sucks just because it got sent to me. I think I speak for all CDX reviewers here. As the owner, I try to match up samples with reviewers who I think would be interested in them. I would remind you though that we do in fact pay for most of our toys.

Good question though, thanks for asking!

got this after reading u guys review. Dont regret buying but boy it wasnt cheap.. cost me almost 100 dollars to get it ;____;