Finally, Final Fantasy VII has got it's own line of toys for collectors.

Play Arts has finally brought to us highly detailed figures of Square-Enix's (formerly Squaresoft) beloved Final Fantasy VII characters. Tifa, Vincent, and the villian Sepiroth were the first to be issued out from the fabled game. I was upset not to see the main character of the game, Cloud, make the first round although people Japan were able to get their hands on a limited edition figure of Cloud with the purchase of the new Final Fantasy VII: Advent Children DVD movie. However, Play Arts simply saved the best for last. They released a huge deluxe collector's set consisting of Cloud himself and his motorcycle from the movie, Fenrir! 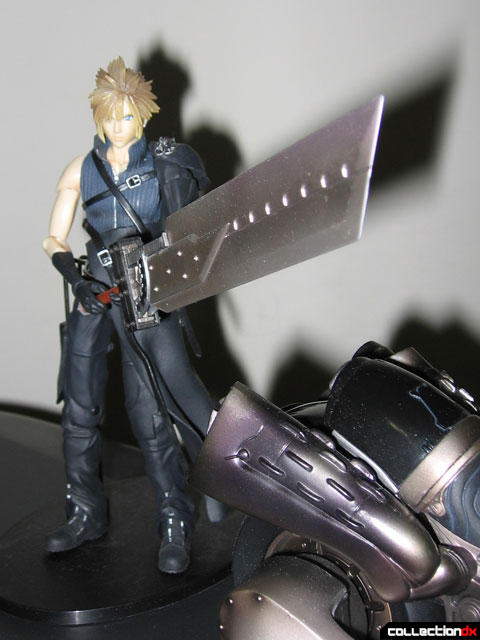 The figure and bike came in a huge rectangular box with a nice window display that showed off all its contents. For collectors, the box is too big for storage and was easily damagable. Not collector-friendly. But the artwork displayed on the back of the box some nice illustrations of the number of poses the Cloud figure can perform. - *** 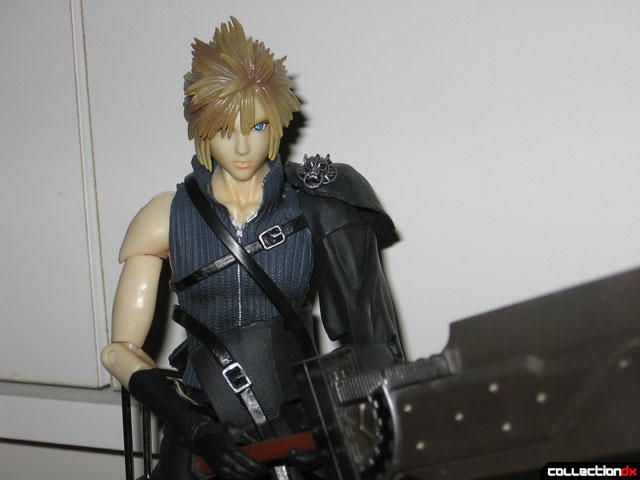 The sculpt was based more on the new movie, depicting Cloud as older than we last seen of him in the game. With that said, they did a great job with the face and paint application with nary a stray mark. The hair-do was dead on. This was definitely a figure meant for collectors and not meant for mass market and the quality shows. The clothing includes chain links and other neat little details that hardcore Cloud fans will appreciate. - ****

I haven't counted how many points this figure has but I am guessing 20+. Now, while this figure is highly posable, the joints especially on the knees and hip, were on the weak side. The display stand was required to hold him upright. I also wasn't thrilled that the arm joints were not strong enough to hold his huge blade (more on the blade later) and I had to support the blade on his abodomen to pull off a decent pose in his hands. - ***

Cloud comes with an extra hand to hold the handle on his bike. He also comes with his awesome blade and let me tell, the blade is huge, as big as the entire figure! The detail on the blade looks good as well with paint intact. 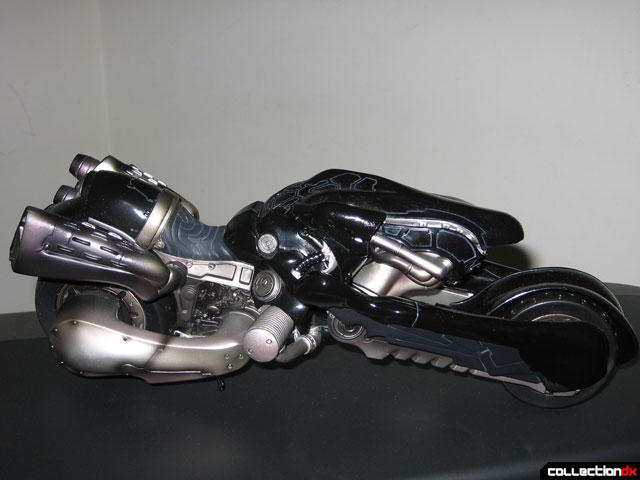 Now the biggest accessory of this set is of course Cloud's bike, Fenrir! This thing is a beast and needs to be seen to believe. The gloss metallic paint and details from the handles down to the brakes are incredible and really shows the workmanship that Play Arts is known for. The realism of the bike's gears makes it a work of marvel. Definitely, this accessory takes the cake! - ****

Very fun figure to pose but I would not let a pre-teen play with with this set especially since this fragile set cost about $60-$70. - ***

I love the figure and I appreciate the quality of this product. Play Arts has made an honest attempt to please collectors. The only thing I would warn you of is that the Cloud figure is, again, on the weak side as the joints are concerned. Easily breakable if you overdo it on the posing. For $60-$70, it's a little pricey but the ends justify the means and if you have the cash, you should not definitely not miss this set.

i hated the figure of cloud for one very simple reason. just like the Auron figure from play arts, the groin/leg joint is so ridiculously brittle that it'll break off so easily, especially when trying to pose him on the stand which is so restrictive to the movement. but besides that, the detail is superb which makes up for the shoddy workmanship that play arts did.