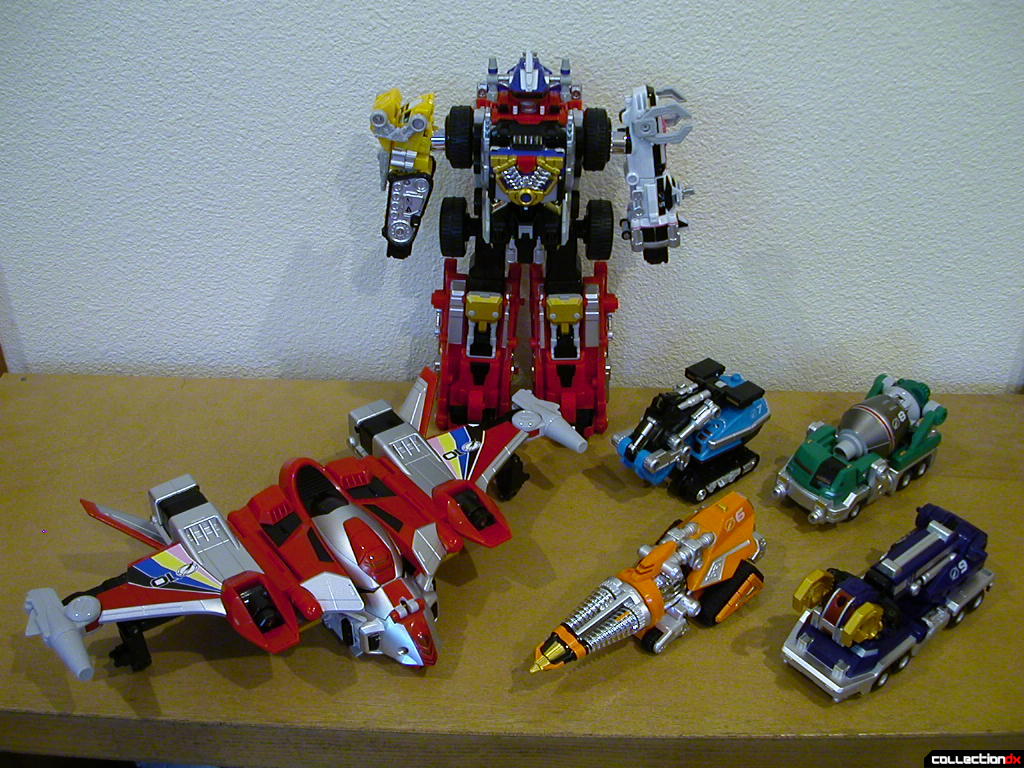 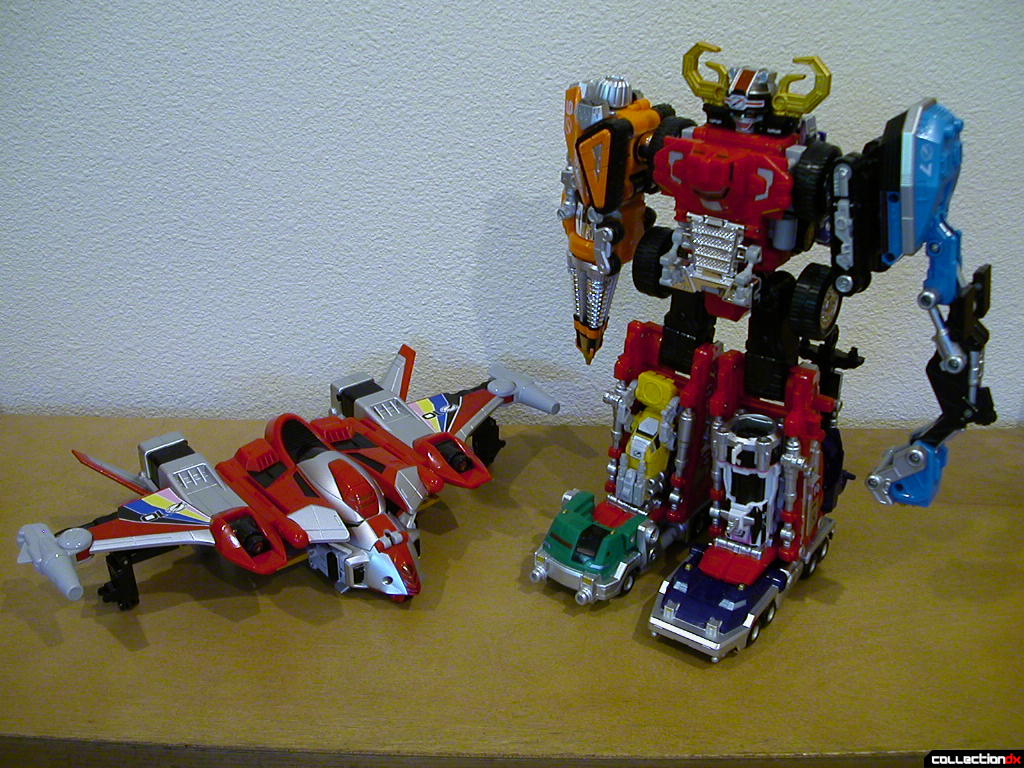 “Akashi-kun. Gougou Jet can combine with Super DaiBouken. Try it.”

Towards the end of Task 16- “The Water Crystal”, Bouken Red and the Jaryuu Clan defector Ragi are using the brand-new Gougou Jet to recover the reformed Aqua Crystal from a volcano to restore the Water Metropolis of the Water People. Meanwhile, the other four Boukenger are fighting against another powerful Jaryuu Clan monster. However, without Bouken Red’s contribution of power to Super DaiBouken, they cannot beat back Naga, the Jaryuu Clan monster tasked with recovering the Aqua Crystal. Then Bouken Red returns in Gougou Jet with word that the Precious has been recovered and is safe. Makino-sensei contacts the Boukenger and says that Gougou Jet was designed to be able to combine with Super DaiBouken. Sliding across the ground at high speed, Super DaiBouken catapults itself into the air, where it meets up with Gougou Jet and together they form the ultimate thundering combination, Ultimate DaiBouken!

In addition to its incredible airspeed and surprising agility, Ultimate DaiBouken is also heavily defended with thick armor and the strength provided it by the ten Parallel Engines that power its structure. When enemies get too close, the blue lower torso, which contains three jet turbofans, can create the Variable Typhoon wind blast to knock them over. Or it can shoot the powerful aerial energy finisher Ultimate Blaster from its chest to vaporize its giant Negative Syndicate opponents.

The kyuukyoku gougou gattai heartily breaks that mold at last with ten components! However, it comes at a price... 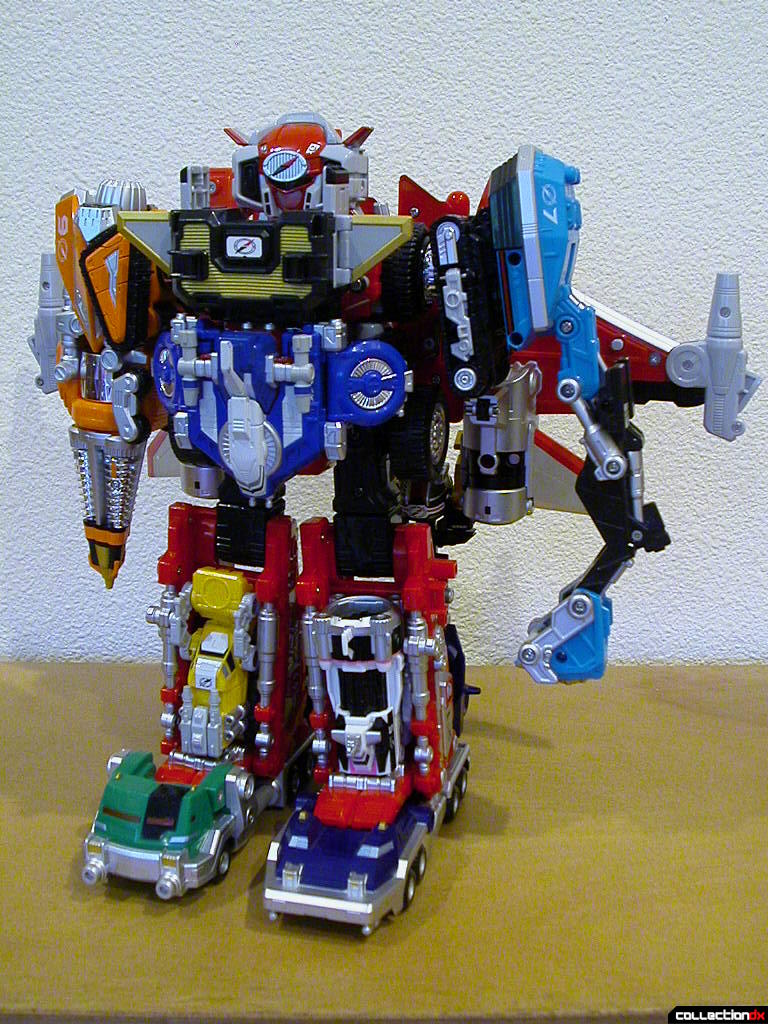 Ultimate DaiBouken (back)- like the Chou Gougou Gattai Super DaiBouken immediately before it- is built upon the assumption that sharp, disproportionate bulkiness would suffice for aesthetics. Gougou Gattai Vehicle #5-Gougou Jet replaces Gougou Gyro as the new winged backpack. The two thin black support beams from underneath Gougou Jet’s wings wrap around Super DaiBouken’s waist, and Gougou Gyro then acts as a type of belt buckle for them in the front. The fuselage for Gougou Jet separates into two sections: one forms the new chest section, and the other completely enveloping the DX Gougou Gattai DaiBouken’s tiny tin can-shaped head.

The head of Ultimate DaiBouken is actually pretty imposing with the large air intakes on either side of its shiny black visor, and the SGS logo planted on the forehead; it has a very streamlined appearance to it (even with its own small canard wings!), as if made for speed. (Some have said this “Gundam” approach is inappropriate & out of place for a Super Sentai robo, but I think it worked well in boosting the overall look of the mecha.) The chest unit very much reminds me of the chest unit on the Max Victory Robo from “Kyuukyuu Sentai GoGo-V” in 1999 (aka Lightspeed Solarzord, from “Power Rangers Lightspeed Rescue” in 2000), but without the double-barrel cannons thereon. But if you think the Ultimate Blaster is a feature on this toy, think again. The only action you’ll find on the Ultimate DaiBouken’s chest is the spring assembly for the escape pod for Gougou Jet. To make sure that nothing is lying around unused from these toys (which, BTW, I absolutely love, PLEX!), Super DaiBouken’s helmet is restored to the end of Gougou Crane’s extending boom. However, this makes it a bit awkward as it looks lopsided standing so close to the thrusters on the backpack. (This wasn’t quite as much of an issue with Super DaiBouken since Gougou Jet’s large wings weren’t there.) The winged backpack looks good enough from behind, but since the wingspan only measures 13” (33cm) wide, from the front angle it is nearly blocked out by the Gougou Drill and Gougou Shovel arms. As it does on Super DaiBouken, poor Gougou Formula gets completely enveloped by Gougou Jet in this form, and is now thoroughly sandwiched between it and Gougou Dump. With all of this bulking up, it is ironic how the left arm (Gougou Shovel) now looks more proportionate to the figure than the right arm (Gougou Drill), which was not the case before.

I’ve already given my recommendation on the other six sets individually, so there’s no need here. Ultimate DaiBouken remains true to the Gougou Vehicle line so far- both the good and the bad appear here. So, again, this becomes a so-so combination because of its components’ inherited traits. However, it is the variety of combinations (not just limb-swapping) that makes it likable. If you can, get Gougou Jet so that you can make the Kyuukyoku Gougou Gattai Ultimate DaiBouken. Even if it ends up just sitting on your shelf collecting dust, it will be a highlight nonetheless despite its flaws. 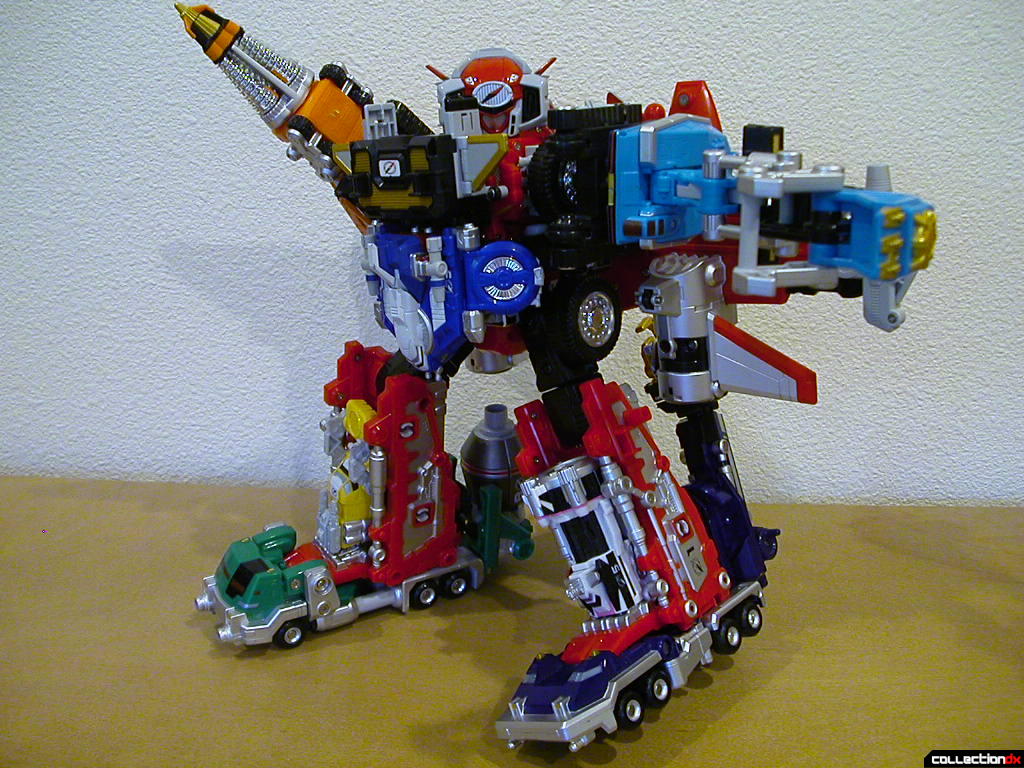 There’s one more super combo that can be made using just Gougou Jet and the other four Gougou Gattai Vehicles! Move on to the third page to see a special combination exclusively seen in “Gougou Sentai Boukenger: The Movie- Saikyo no Precious”- the second Bouken Formation, Gougou Gattai DaiTanken! 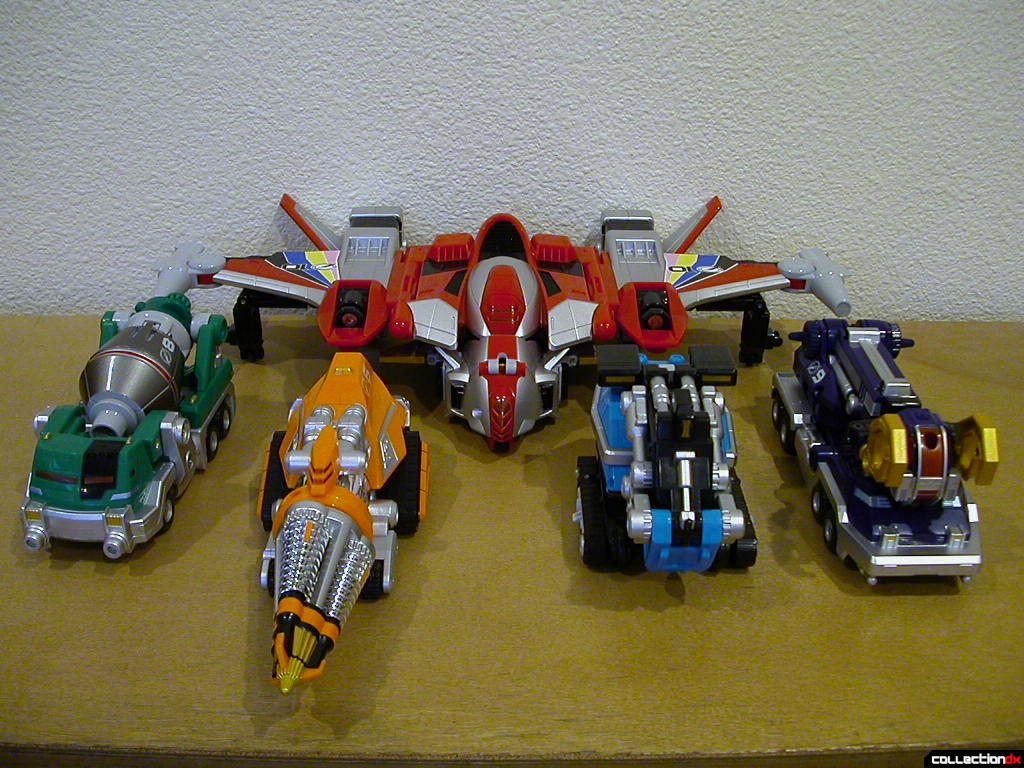 however,i juz tink tat ultimate daibouken looks a little chubby which affects my opinion on it..........but i will still get them no matter wat