The morpher for the 2006 Sentai Series Boukenger is called the Accellular. It looks like a cell phone and has a cover that rotates 360 degrees around a central hub in the center of the morpher. When the cover rotates, there are 2 stops. The first stop is 90 degrees counter-clockwise. The 2nd stop is another 90 degrees counter-clockwise (180 degrees from the closed position.) A small triangle on the hub aligns with 2 small triangles on a thin, gold plastic ring that corresponds to the 90 degree and 180 degree stops. Around the thin, gold colored ring is a clear plastic ring which lights up as a red circle of light when the LEDs underneath the central hub light up. This circle of light provides the only source of flashing lights for the morpher. At the bottom of the Accellular is a Turbine Wheel that is used to shift into high speed acceleration. 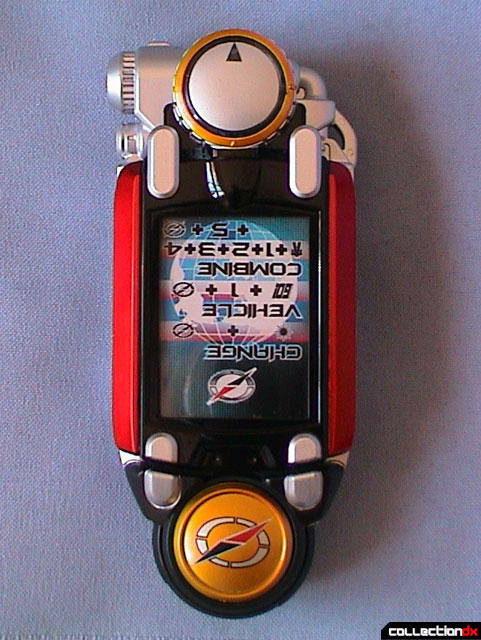 When the power is turned ON, you hear 2 beeps, followed by a "chunk" sound.

Mobile Mode - with the cover closed, Bandai refers to the morpher as being in the Mobile Mode. They sell an Accellular Holder that you can purchase separately (a holster for the Accellular), which straps around your upper arm. The Accellular then fits neatly into the holster.

Search Mode - With the cover rotated 90 degrees, the keypad is revealed. There is a hard plastic key on the upper left, that has an icon with a Question Mark and a Flash of Light. When pressed, you hear a series of descending tones for 2 seconds and a Blue Light shines on the left side of the Morpher for 5 seconds. The sound the Morpher makes when the key is pressed corresponds exactly to the sound the morpher makes in the TV show when one of the Rangers uses the light. In the TV show, the Rangers are searching for something called "Preciouses". When they find one, they use the morpher's Search Mode to bathe the Precious in the blue light and a point value displays on the morpher's screen, telling the Rangers how valuable the Prescious is.

Commando Mode - With the cover rotated 180 degrees (fully opened), the keypad is also revealed and on the upper right side of the Morpher is a hard plastic key with a Telephone Icon. When pressed, the Morpher beeps 3 times for 3 cycles, while at the same time the clear plastic circle of light around the Central Hub flashes red in unison to the beeping sounds.

In between these 2 keys is a circular black button with a Sunburst Icon. When pressed, you hear the sound of an engine attempting to turn over. If you don't touch anything, the engine will make 16 attempts to rev up. At the bottom of the Morpher is a gold, circular Turbine Wheel with the Boukenger logo on it. If you spin the wheel at any time during the 16 attempts to start the engine, you will hear the engine accelerate to super speed, followed by a "morphing sound". As the engine is trying to rev up, the clear plastic circular ring of light in the Central Hub pulses in synch.

On the keypad of the morpher is a set of soft plastic keys numbered 0-9. On the bottom left of the keypad is a Robot Icon and on the right is a "Go!" key.

Pressing any of the numeric keys, generates one of 3 random electronic tones. No lights are associated with the number keys.

Pressing the Robot Icon results in a voice saying, "Gattai shifto on!", followed by a siren wailing 15 times. Red lights flash in the Central Hub ring.

If you press one of the numeric keys at some point during the 15 siren cycles, each key results in the name of a different Boukenger vehicle being spoken.

If you press the Robot Icon AND enter certain combinations of numerical entries AND spin the Turbine Accelerator, it results in several special sounds being produced.

Go! KEY - On the bottom right of the keypad, there is a soft key marked "Go!". If you press it you will hear a siren wailing that will repeat for up to 15 times if you take no further action. If during those 15 cycles you press a number key, you will hear the name of the Boukenger vehicle associated with that number (from the above table). If you then spin the Turbine Wheel, you will hear, "Go!.....GO!!!!"

If after turning the power ON, the morpher is left idle for 56 seconds, it will beep once and the lights will flash once as a reminder that it's still on. No further warning is given.

WARNING!! Do not stare at the light. It looks very bright and can possibly cause eye injury. Bandai US did such a nice job altering the Magiranger Magiphone to the US market, that I'm curious how this one will translate next year when it hits the stores over here. 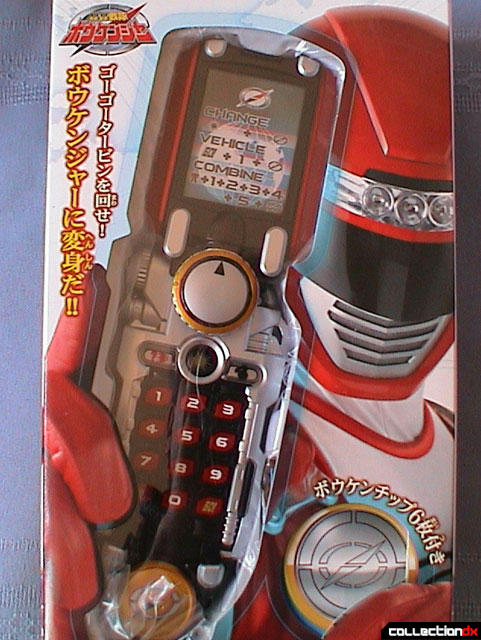 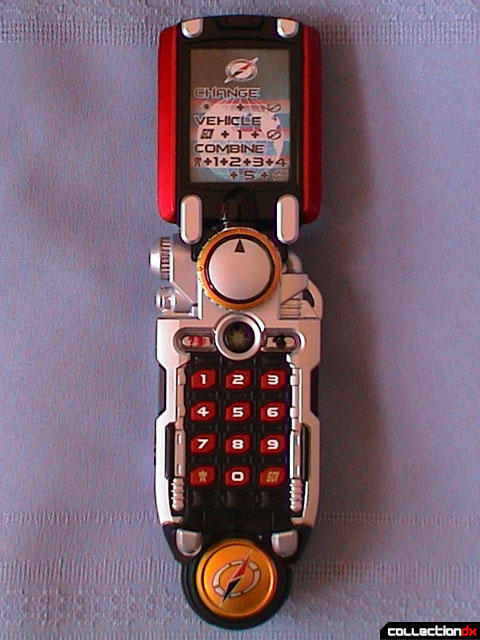 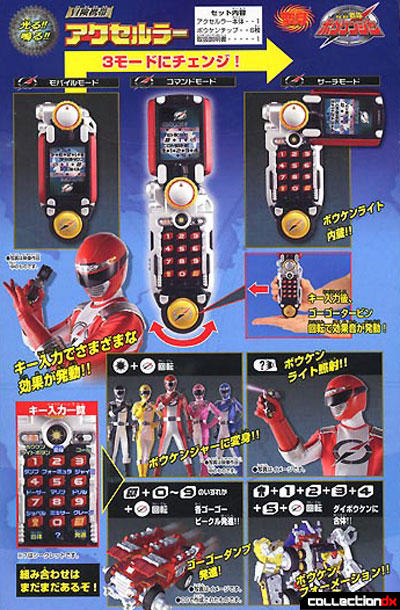 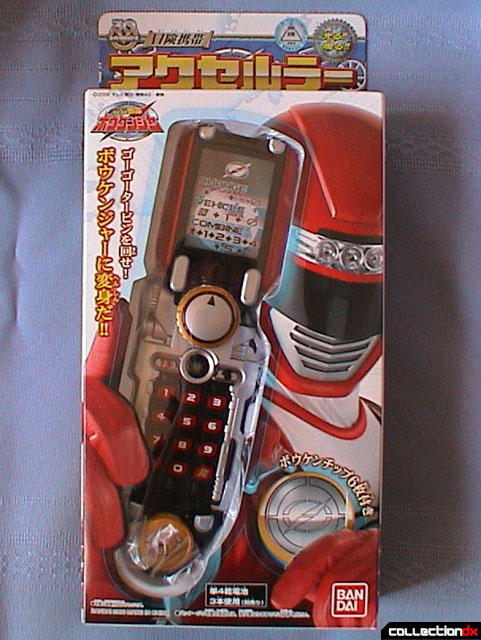 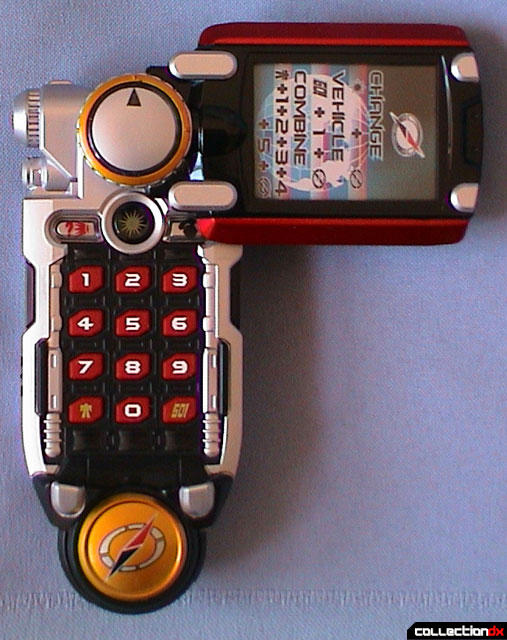 Like the MagiPhone from 2005's "Mahou Sentai MagiRanger", this thing has a fully interactive keypad with code numbers that cause different things to happen. The Scan Mode blacklight LED is a really cool and fun idea. I also like the techy, 'realistic' look of the Accellular in general. I also like the accessory arm pouch Accellular Holder (sold separately). (I just wish the straps were longer so that I could wrap it around my arm!) It even talks in the same voice heard in the series! (Super Sentai alumni voice actor Shinichiro Ohta can't speak clear English to save his life!)
Oodly, in the series and on the toys, the Accellular [and the Gougou Changer] can't access the later 14-18 Gougou Vehicles which make up the DX Chouzetsu Gougou Gattai DaiVoyager.

A trick you can do when using the hasshin command:
--Go! button > Turbine Wheel- launch without pressing a number!

Tricks you can do with the gattai command:
--Gattai > 6 7 8 > Turbine- it can't be done on the DX toys or in the show, but the Accellular accepts any three numbers after 5 put together.
--Gattai > 6 7 8 9 > Turbine- activate Super DaiBouken without using 1-5 keys at the same time!