Alaqua is part of a new line of gothic-style dolls by BBI (a sub-company of Blue Box Toys), distributed by Merit International. The line is called Dark Desires, and it aims to capture the spirit of the gothic subculture. 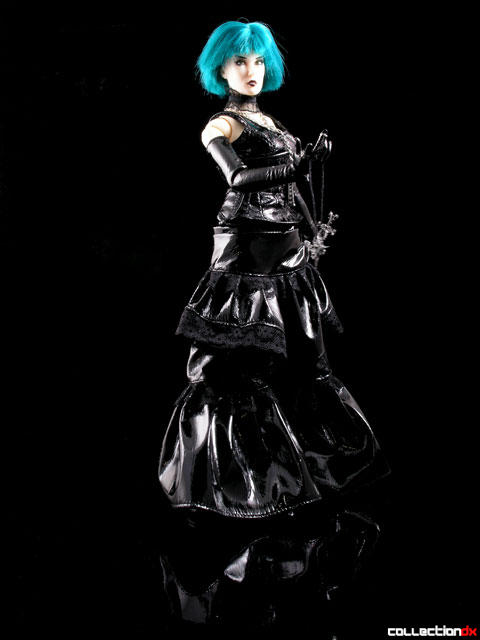 The back of the box has a bit of text that describes their interpretation of Goth:

Dark Desires exists for those that are today’s true Goths…. So what are Goths? Some dictionaries describe “Goth” as members of a Germanic tribe from the 3rd to 5th century, a style of rock music, or a member of a sub-culture favoring black clothing and white painted faces with black make-up.

While each of these definitions may be somewhat correct, they are not the real essence of today’s Goth movement, and those that live and support it remain largely misunderstood.

Goth is more than a fashion statement; it is a way of life. One that takes things on its own terms, regardless of the opinion of others. Those that enjoy Goth are just like other people, they go to the movies, to dinner, to parties…. They just express themselves differently by making choices about their appearance and interests.

Dark Desires stands as an example of such choices, and its members display their own individuality and their need not to conform, and these are their “Desires”. The “Dark” is a reference to their preference towards the darker tones of black, purple and scarlet.

Their names are chosen from those they feel a bond with and so we present Shadow, Angel, Vlad, Chaos and Alaqa… Each an individual. Their choice of fashion is full of opposites such as leather and lace, but to them there are no contradictions, only choices including silver, leather, lace, chain and use of dark tones.  Dark Desires is a group where the “misunderstood” can communicate and be accepted for their individuality, needs and desires.

This group will flourish in time and will be……..

I don’t know if I agree with their definition of Goth. Around here, Goth is synonymous to 16-year-old overweight kids hanging out in the mall wearing baggy pants, eyeliner, and holding a Slipknot lunchbox. But at the other end of the spectrum, you have the Japanese Gothic Lolita look, which is closer in spirit to what we have here. 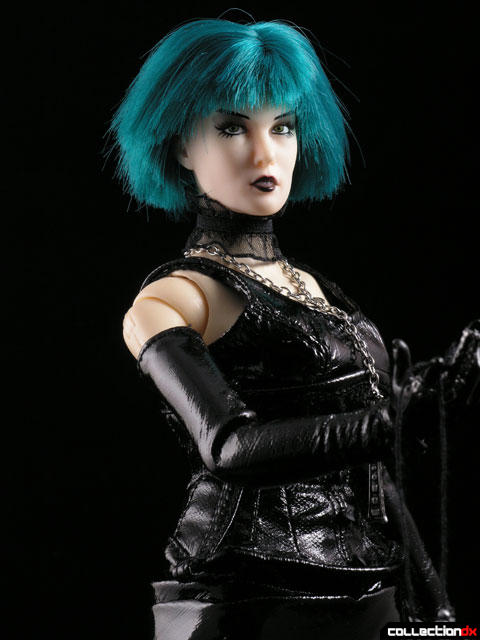 Alaqua is a fully articulated 1/6 scale figure. She has a wide range of poseability, and she is actually stable. Alaqua can stand on her own without the need for a doll stand. 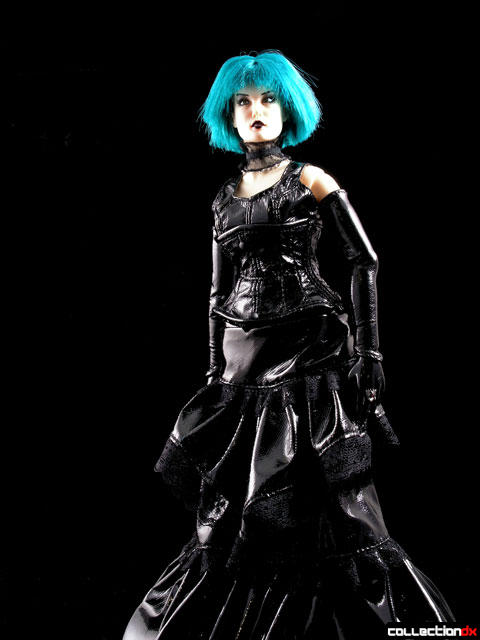 The head is cast in soft vinyl and uses soft blue hair. The hair tends to get a bit messy, but I’m sure you could brush it out. The facial details are crisp and clean with sufficiently light skin tone for that “afraid of the sun” Goth look. The rest of the body is hard plastic and features more articulation than you would expect. This is great for posing, but with this doll, I think the extra articulation actually detracts a bit. Where this doll has exposed shoulders, you can see the double shoulder joints, and it distracts from the overall appearance. 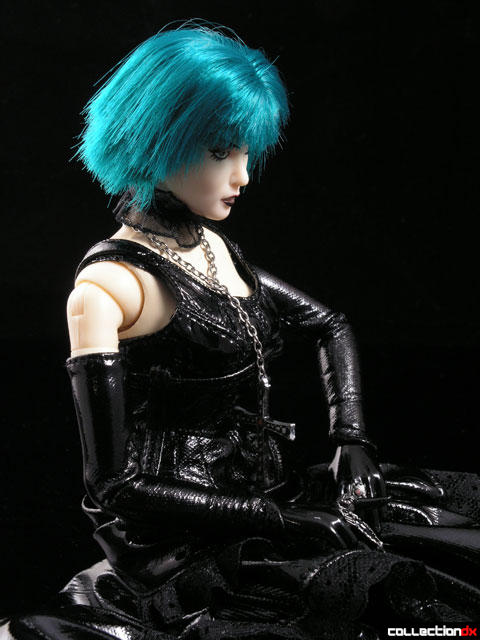 Alaqua’s outfit is made out of a combination of lace and what I think is vinyl. The outfit is several different pieces and can open in the back. The black hands are cast in plastic, as are the boots (which are not removable). 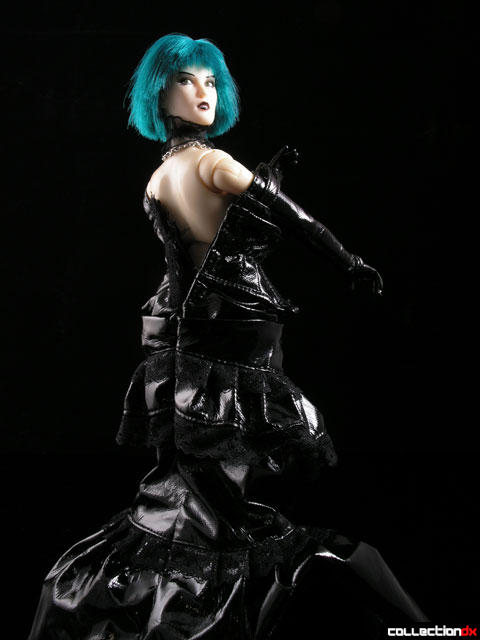 Included with the doll is an assortment of Jewelry. First there are several small plastic charms on a black string loop. I initially thought it was a necklace, but I couldn’t get it over the head. Then there is a metal chain necklace and several larger charms. The metal chain has a piece of metal that dangles from the center, to which you can attach any one of the charms. Unfortunately, this connection point is just a ring – no latch at all. I had to get a pair of needle-nose pliers to bend the ring open, add a charm, and close it. I ASSUME that the charms are supposed to go on here, but there are no instructions that say what you are to do. 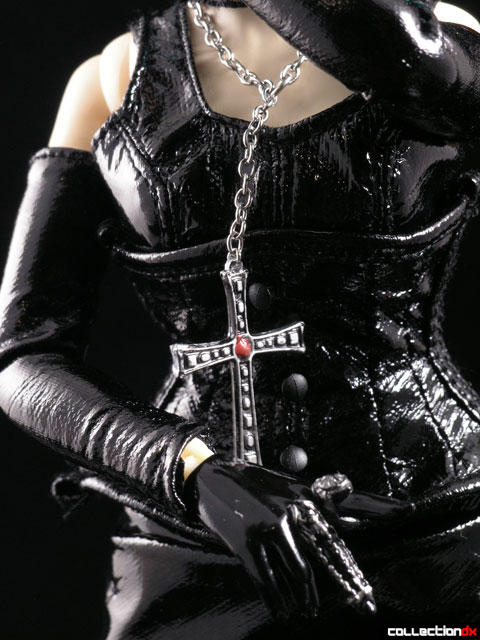 Minor gripes aside, this is a really beautiful doll. It looks so alive and seductive in any pose you put it in. Sure, it is a glamorized version of Goths, but if they all looked this way, maybe I wouldn’t laugh at them so much when I see them at the mall waiting for their parents to pick them up. 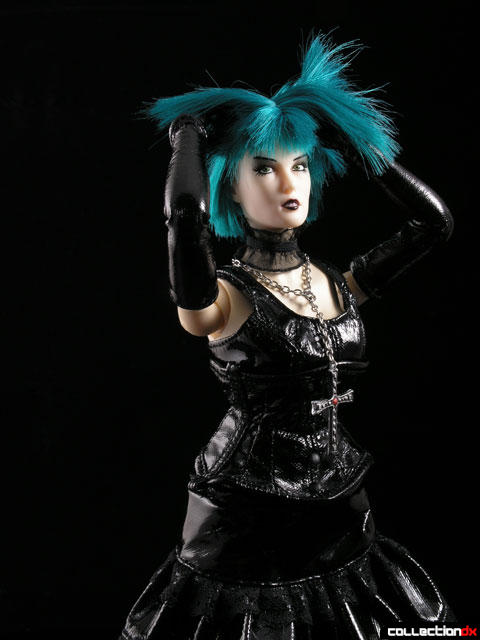