The first kit I got out of the Gundam SEED Destiny line, and long overdue to be built. I started work on this kit when it first came out, but never got around to finishing it much before the past few weeks.

At the end of the popular series, Gundam SEED, the ZGMF-X10A Freedom is ravaged into to a smoldering heap of space debris. While it was expected to remain destroyed, it returns to life in Gundam SEED Destiny as Kira Yamato’s personal mobile suit once again. Even as the most powerful MS in the series, Kira suffers an agonizing defeat to the series newcomer Shin Asuka in his ZGMF-X56S Force Impulse Gundam resulting in the permanent destruction of the fan favorite Freedom…. But who says Upgrades can’t get UPGRADED. In their attempts to end the new war between the Earth and ZAFT, Kira and his crewmates of the Archangel are reunited with the former ZAFT fleet led by Lacus Cline and their hidden sortie of mobile suits. Among them is the ZGMF-X20A the “STRIKE FREEDOM.” A new version of the infamous Freedom, but with a new combination buster rifle and a Dragoon system built into the wing binders. Another feature of this iconic figure is its gold plated joints.

The 1/100 scale version of this MS comes in as close to show accuracy as they can go with the kits. At its scale, the model builds up to 7 inches in height, head to toe. With its binders open it goes as high as 10 inches. The kit seems rather disappointing though for its bulkiness, but it makes up for it in its posing ability. Construction is rather standard, and the detailing is a little bit shy of the panel markings put into the original Freedom of this scale. Like I said, show standard. 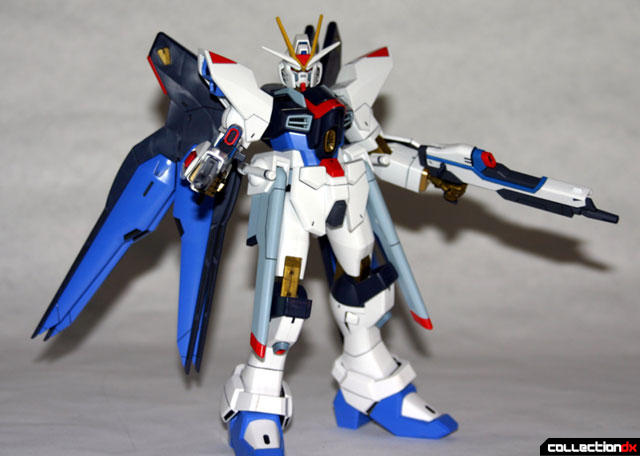 The joints as said before are gold, now instead of going with the electro-static plating (that mirror reflective coated plastic) Bandai opted for the more economic gold injected ABS. This is also a cosmetic method to avoid scarring parts that connect to the runners on their surface areas. A drawback is that its tensile strength is rather soft, but this works out as a joint component more than actual body parts. Its use in the hands is another story. While they work for aesthetics, they run a risk of snapping the peg that holds the fingers together in the ‘fist’ hands, which require separation to insert the rifles.

In some aspects, construction of the Strike Freedom is rather shallow. It’s economic on the fact that they can squeeze more part detail into single parts, but it loses that constructive value that you get out of more parts especially in 1/100 scale models. For instance, the original Freedom’s head (this scale) had a four part face: the red chin/nose, grey cheeks, white face, and the eyes. The Strike Freedom has a two part face: white face (paint needed for cheeks) and the red chin/nose (paint needed for the eyes). Resulting, a bit of aesthetic gaudiness because the part within part look makes a part look squeezed and cramped.

The arms are the first noticable place to suffer issues of construction. The arms rotate at the cuff of the bicep rather than at the base of the shoulder, so you get that unsightly block on block look. Also at the base of the elbow, where it enters the forearm, there is a gap. I don’t mean like an unfitting seam, I mean a GAP. A simple cosmetic flaw or a mislabeled assembly, you be the judge. On the back of the forearm though are a set of plates with a red jewel shaped piece that work for the Strike Freedom’s shield. Although I liked the shield design of the SEED/SEED Destiny machines, the story mechanics headed forward to energy based shields. Last time I saw something like this that worked was in a latecomer of the Universal Century, the Gundam F-91. For this feature, the Strike Freedom comes with one clear plastic energy shield. To connect it, you have to remove the red ‘jewel’ piece on the back of the forearm and fit it underneath it. The downside about this is that because of how the arms are assembled, and with the short distance from where the shield connects to the shoulder, you have to fight with the beam shield to hold it in place without it getting pushed out. This same issue happened before with the original Freedom and its shield. Seems some problems can’t be upgraded after all. 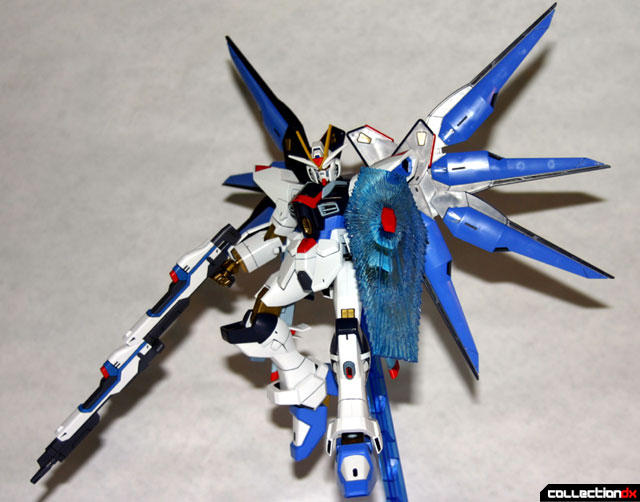 There are a few nice construction points in the body; mostly the torso, legs, and weapons. The torso includes swinging pivots in the shoulder and neck for improved mobility. It works well considering the wing binders are ‘properly’ open when parallel to the shoulders. So the arms can be stretched out in a dual rifle pose. The drawback is that its not too great a range, compared to the level of articulation in a double jointed shoulder as seen in the Master Grade form of the Freedom (and Kira’s first MS the GAT-X105 Strike Gundam). A small region of the torso that stands out is the gold plastic beam cannon in the stomach. The legs are just a matter of opinion. For the lower legs, the Strike Freedom sports opening vent binders in the back. There’s an amount of construction here that the rest of the kit fails to have: thruster vents, dividing plate, polycap joint and the covering. These binders can close down and fit the contours of the calf region.

The weapons are a nice bit of work. Like the original Freedom, the Strike Freedom has the hip mounted rail guns. Unlike the original version, the Strike Freedom’s fold in half and are hence much shorter. Also built into this assembly are the docks for the beam sabers. Constructed into the torso, the rail guns that mount on the hips of Strike Freedom can be shifted around and fit onto the back skirt when not in use. In that stroke, the dual buster guns can be docked on the hips (in the polycap where normally a hip skirt attaches). Now enter the drawbacks. Due to the clunky structure of this kit, the rail guns don’t lock in place very well, and the rifles stick up into the armpits. Add on the beam sabers, the Strike Freedom can’t really put its arms down to its sides completely. 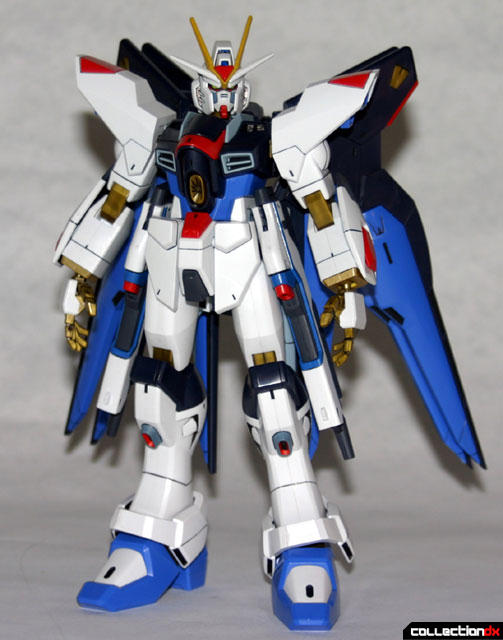 I suppose this is why the guns are better off carried in the hands than not. The dual rifles are pretty nice, with a decent amount of paint work to be done, mostly panel striping work and optical points. The added feature is that these weapons combine. Not like the classics such as the Wing Zero’s dual buster rifle which connected into a side by side, but from connecting one end into the other. There is a minor transformation to this as well: the “stock” rifle and the “barrel” rifle. The stock rifle’s rear section extends back, where the barrel rifle folds down its trigger, extends its barrel and rotates its rear section. Then it’s a simple insert rifle A into rifle B and presto! It seems kind of awkward but it’s a nice touch.

The Wing binders are a small kit’s worth of work, but not in the scale of the Tactical Arms pack from the Astray Blue Frame Second L. The binders are built with a primary and secondary limb. The primary section is an ‘L’ shaped part making the bulk of the body and where it connects to the joint in the backpack and the secondary is just a little extension on a hinge. The entire assembly is to make four of these units: two for the left and two for the right. The nice part about the assembly though is that your parts for the right and the left are made to mirror its own assembly; so no seeing a seam line on the front of the right wing assembly that you see on the back of the left wing assembly. The part that always confused me until I did more research was how to pose the wings for that “Full Open” shot. Either it was I rotate the wings out 30 degrees in the front section and 90 in the back or vice versa and then spread the limb binder open. But actually I found out its only rotate the back units 90 degrees outward and then spread that one’s binders open. The overall assembly is also a weapon system called DRAGOON. To those that grew up in the Universal Century (the original MS Gundam universe) DRAGOON weapons are much like Funnels and Incoms: wire or remote guided weapons that could be used as offensive or defensive purposes. With the wing units having four sections, there are four DRAGOON units on each wing assembly, totaling in EIGHT! Combined with the primary weapons along with the beam cannon in the stomach, the Strike Freedom has a total of 13 primary weapons. 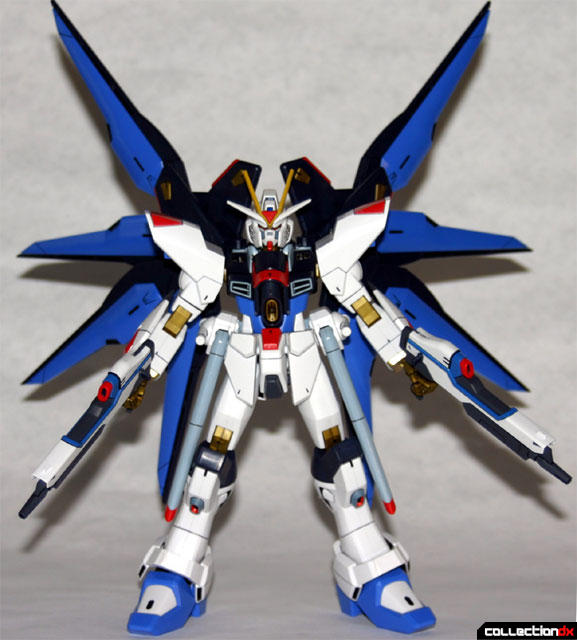 A real drawback on this portion comes from the way it is assembled. In the extending arm from the backpack, where the binders connect, is a ‘D’ type polycap. This is a very narrow part and it has to share two binder assemblies. This is a minor frailty, but it hampers on the range of motion for the wings. Push too far, they fall out of the polycap. As far as weight is concerned, the Dragoon parts are only half/half pieces with nothing extra in between, it’s just the quantity weight.

In the first initial wave of the 1/100 scale editions of the Strike Freedom, the ZGMF-X42S Destiny Gundam, and the ZGMF-X19A Infinite Justice, Bandai added in a clear plastic display base. However with the Strike Freedom and Destiny, Bandai exclusively made additional detail parts for the waist. These parts were two ball socket assemblies, one for standard poses, the other for a wider range of dynamic poses. The drawback here comes from how the Strike Freedom’s waist is built and the limited range of motion to the rail guns impeding the new flex in the legs’ ball joint hips. There are a set of hanging parts built into the tip of the stand that allow the Strike Freedom to hang by its backpack. The display base is a nice touch though considering the weight of the wing/Dragoon pack on the kit throwing it off balance while standing, allowing it to float instead. Because its construction is really tight and centers on the midsection of the torso, it balances out perfectly, even when adjusted for a low angle pose. 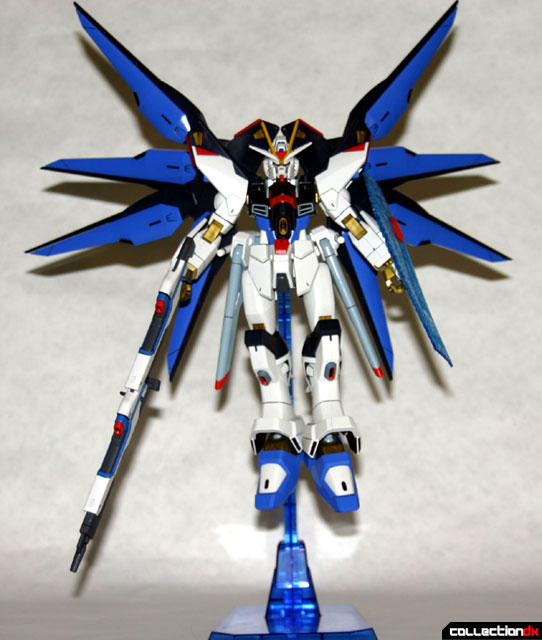 Its not that I hated this kit, hate is a pretty strong word; dismayed, yeah, but far from upset. I really wanted to like this kit, but a few of the cutbacks and shortcuts taken in its design really sets a sour note on such an iconic character machine. I guess this is just my opinion because I’ve been working on “Astray” models and then coming back down to simplified part design. However, I have seen that they did something special to clean up where they went wrong with this version. Four words: Strike. Freedom. Lightning. Edition.