Like many of you I walked by this thing at the store, thinking “It’s just so big”. It looked really clunky, and to be honest, it was much too expensive for a guy who doesn’t regularly collect transformers. While I loved the Cybertron Prime, this one didn’t do it for me.

Well, come Christmas morning I found him under my tree. Apparently, Santa wanted me to have him. Who am I to say no to Santa? I suppose I could have returned him and bought something else, but I didn’t think that to be appropriate. I kept him, and I’m glad I did.

Cybertron Starscream is big; bigger than Unicron. At 13” tall, he is probably the tallest transformer I own. He is big and chunky, to say the least. 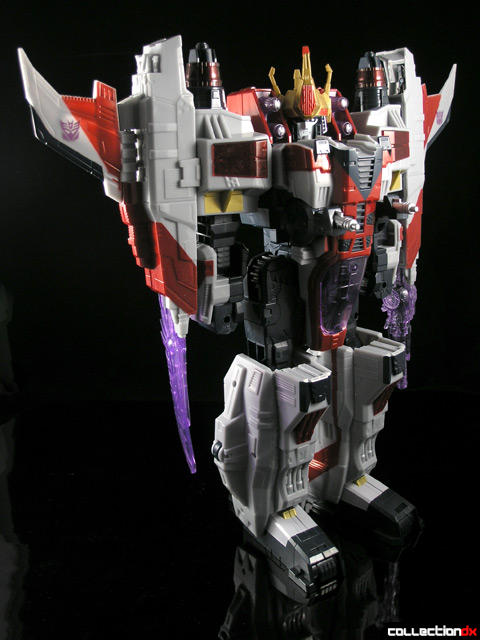 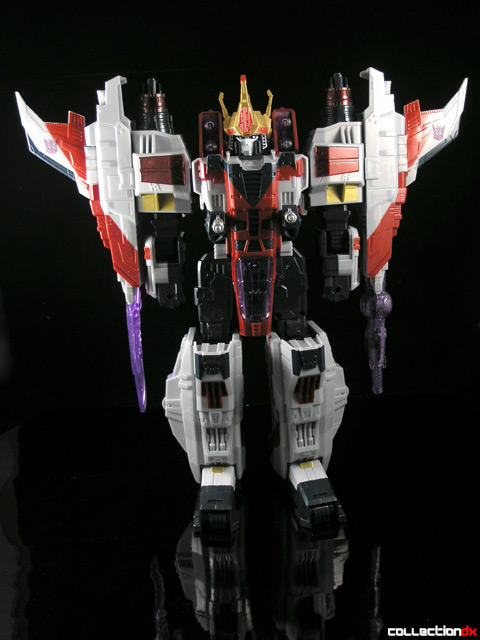 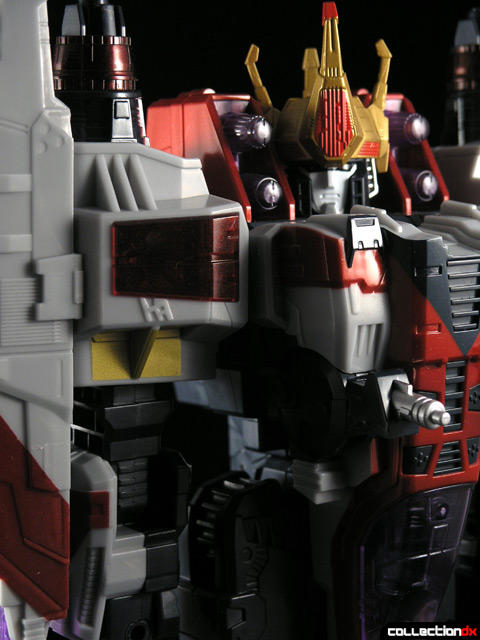 Starscream has a ton of cool little features. He comes with a removable crown, a light up gimmick, spring-loaded weapons, and he even fires missiles. Two Cybertron Planet keys activate the translucent weapons beside each arm. Insert the keys and the arms spring out. One side is a blade, the other a missile launcher. When the keys are not in use they are stowed in small compartments behind the head. Starscream also features 2 cannons on the chest that you can move up and down. 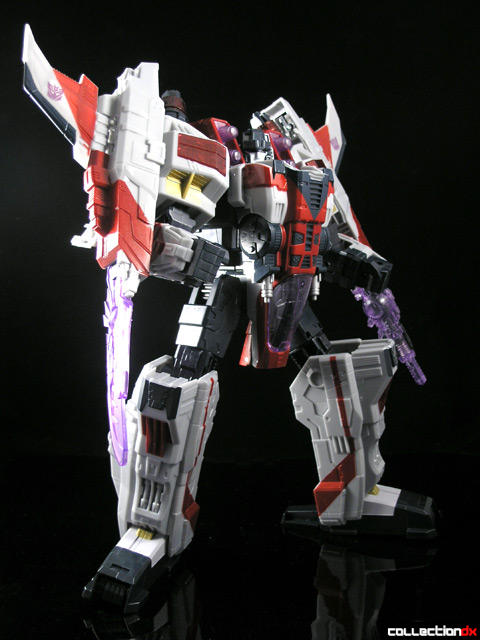 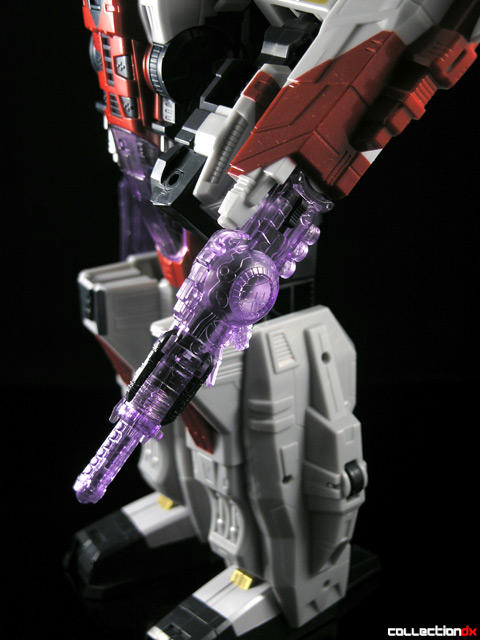 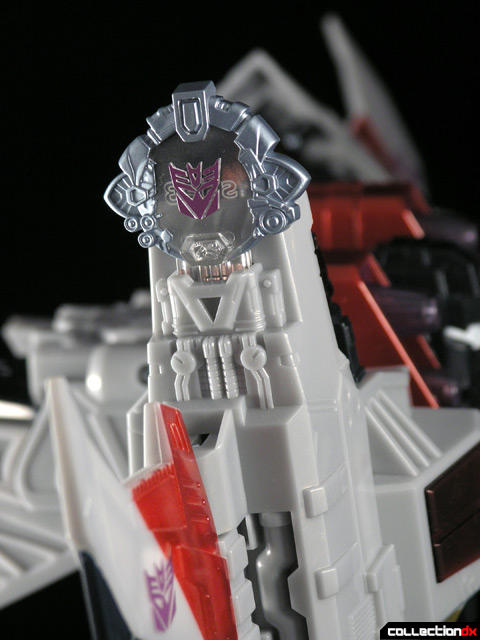 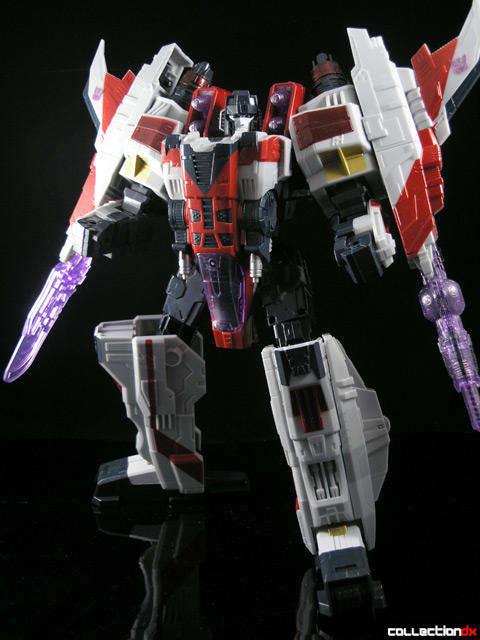 The light and sound features are activated by pressing a button behind Starscream’s head. 2 “AAA” batteries are required, but not included. You’d think if you were paying $40 for this toy, they would include batteries. The light and sounds work in both Robot and Jet mode.

Although he looks like a brick in the package, Starscream is fairly poseable. He has joints in the shoulders, elbows, waist, knees, and feet. The head also turns and his eyes light up. Everything clicks when you move it, and everything stays where you put it. It’s a nice solid TOY, something you can feel comfortable letting the little ones play with.

Transformation to jet mode is not rocket science. Those demanding a challenge should look elsewhere. Starscream looks good in jet mode, but it is a far cry from the days of his F-15 fighter jet form. In Jet mode, the electronics still work, and the jet can roll around on three wheels. 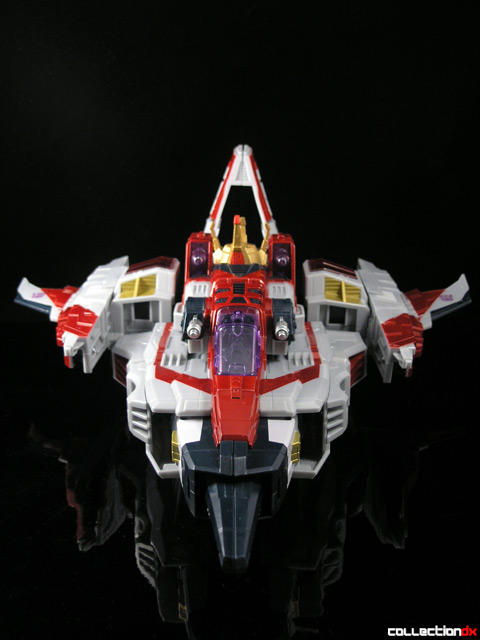 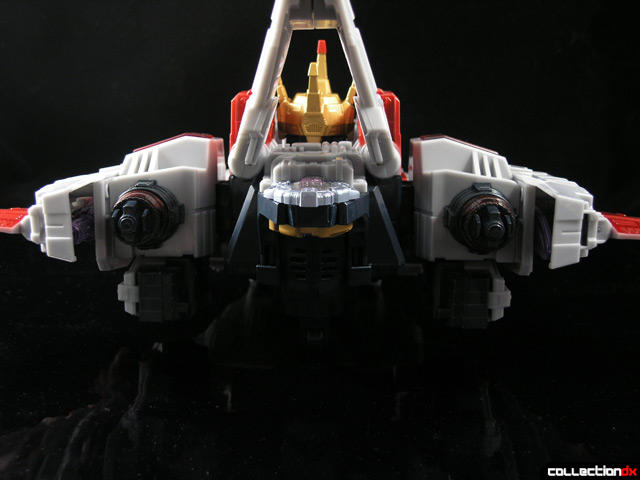 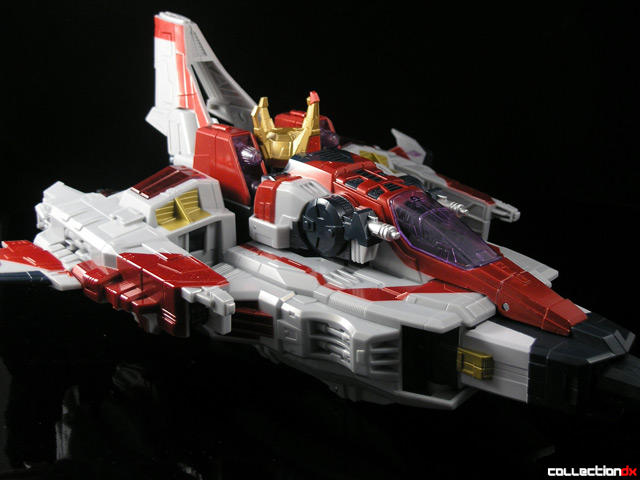 The thing I like about Starscream, besides his good looks, is the fact that I don’t have to think about it. I can just play with it, and not worry about breaking it, or forget how to transform it. It is solid and instinctive. Starscream also has great shelf presence – If you like big fun robots, pick him up. Like all bigger transformers, you are bound to find him on clearance at some point.

For as big and solid as the US-release "TF:Cybertron" Starscream is, he only has, like, one sound FX! Hah!? I have [and reviwed for CDX] the DX Tokusou Gattai DekaRanger Robo (Bandai) from 2004's "Tokusou Sentai DekaRanger", and it's only 9"-tall and has six Light-&-Sound FX and a bump-motion sensor all built just into the chest! How boring, Starscream! But the joints are nice and tight, the color scheme is okay, and I like the vehicle mode.
.
Well, I actually stumbled across a second FX by accident. What they don'ttell you in the instructions is that when the right shoulder (arm with the blade) is rotated forward beyond 90-degrees, there is a metal-clashing sound! Now, this only works when the arm is twisting upwards, but not downwards. However, the lights do not turn on this time.
.
I think there's a third FX somewhere in him, but I haven't found it yet.
.
Oddly, Autobot Vector Prime [also from "TF:Cybertron"] also has a similar hidden FX trigger in the same area when his Planet Key is in place! Why don't they tell you? Are you just supposed to stumble across them by accident like I did???