Author's Disclaimer: The phrases "Delta Squad Megazord Riot Armor", "Riot Armor combination", and "Delta Squad Megazord Riot Armor- Cannon Mode" are NOT official or unofficial names used by Bandai America, Bandai Japan, Toei Productions, Ltd., BVS Productions, or The Walt Disney Company. They are of my own creation, and are not an attempt at infringing or intruding upon the rights, trademark, or copyright of those respective companies and/or owners of the "Power Rangers" theme.

The Space Patrol Set features a large, heavily armed vehicle, and two 3" SPD Rangers that can ride atop it. However, this review will not focus on the two Rangers; the important part is the two halves of the armored vehicle.

For the Japanese-released "Tokusou Sentai DekaRanger: The Movie- Full Blast Action", a limited-issue DX set was added to the DekaMachine arsenal: the Blast Buggy. Piloted by the elite-trained DekaBreak, the Blast Buggy is a small, agile silver-&-black all-terrain vehicle with a powerful energy cannon on its back.

Unfortunately, Bandai America and BVS Productions were unable to acquire the "DekaRanger" movie footage for their English version of the series, "Power Rangers S.P.D." So, in order to provide the Blast Buggy to English-speaking collectors, it was repackaged alongside two 3" electronic SPD Rangers- Red and Blue (with the electronics removed)- but was given no background information. Most people may not even realize that the Blast Buggy is indeed a part of the DX transforming line from "DekaRanger" unless they are familiar with the Japanese series beforehand. So, because the movie vehicle had no screen time in "PR-SPD" and no background info presented, and for the sake of less confusion, I will refer to the toy in its original name, since it was given none in the Space Patrol Set's instructions. 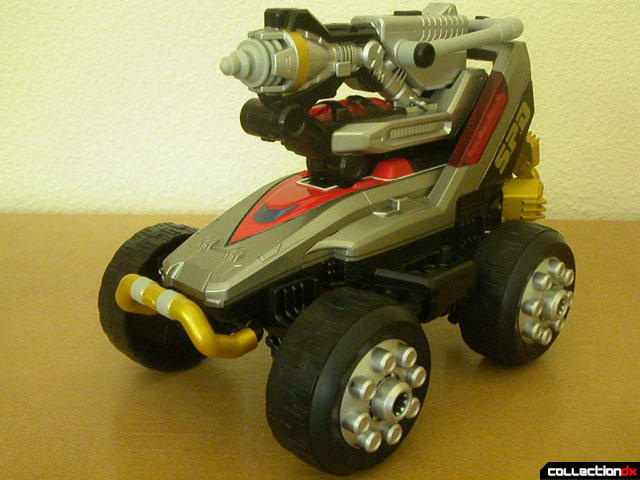 The Blast Buggy (back) features 4 large hollow black ABS wheels with silver-painted hubcaps mounted on complexly molded single-piece shocks. The small metal-blue cockpit sits behind a soft gold-painted PVC bumper. The largest feature on the vehicle is the giant cannon mounted on top of the body. And, to fit in with the "SPD" police theme, there are transparent red pieces mounted on the wing-like structures on the back of the vehicle and inside the cannon assembly to represent police strobe lights.

I must say that the level of detail is pleasantly advanced compared with some of the separate Delta Runners of the Delta Squad Megazord. Even the tire treads have special patterns, and I especially like the complexity of the cannon details and the shock absorber pieces. 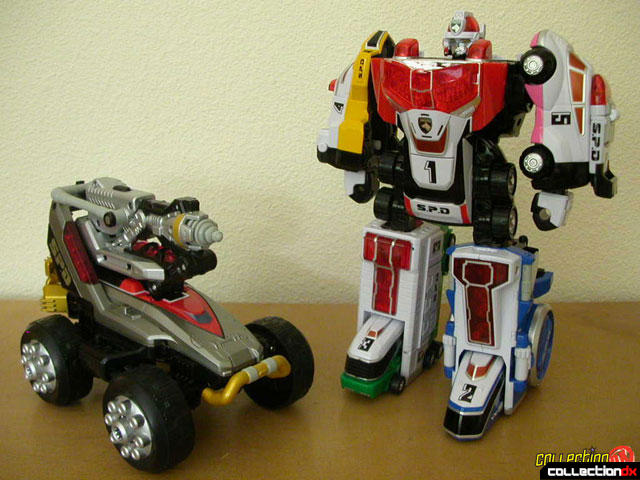 Combining the Blast Buggy with a Deluxe Delta Squad Megazord is very easy, and requires little time to learn. Usually in the past, pieces had to be removed from two sets in order to get them together, and then you'd have a lot of leftover pieces just lying around, waiting to be stepped on. However, that is not nearly as much of a problem here, as the Blast Buggy separates into only three different easy-to-handle parts. The large cannon unfolds and fits under the right arm of the Delta Squad Megazord, and then a clip snaps over the hand. The rear golden bumper off of the main vehicle snaps off to become an extra bit of roll cage-like armor for the Delta Squad Megazord's chest. This covers up the chest LEDs a little, but not so that they can't still be seen. The main body of the Blast Buggy serves as a shield, with a long spear on the end, which snaps onto the left arm. But in order to attach the shield section, the signboard from Delta Runner-5 needs to be removed so that it can take advantage of the same snap-in holes. 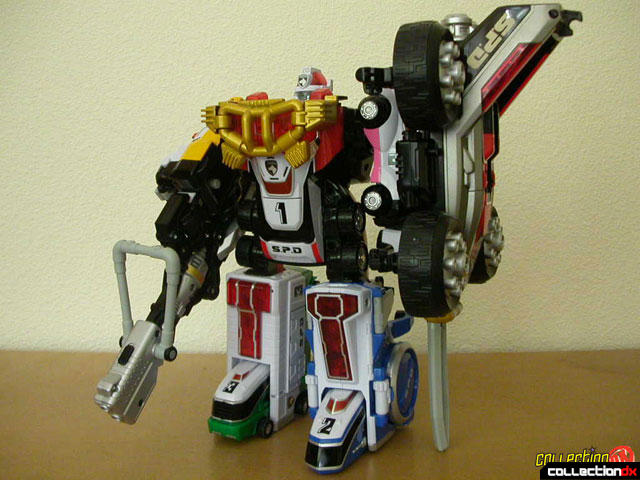 The first thing I noticed about the Delta Squad Megazord Riot Armor (back) was how top- and side-heavy the combination was, with most of the Blast Buggy's mass ending up on the left side as a giant shield. The long hollow soft PVC spear helps keep it from falling over, but the Riot Armor combination can usually stand on a hard surface on its own without falling over if the shield is raised. The long futuristic double-barreled shotgun held under the right arm is equally impressive, and shows a level of planning in transformation that I really appreciated- the details used in one form recombine in a different way, but serve the same purpose. The rotating light gray handle on the shotgun was used by the DekaRanger Robo- Full Blast Custom (FBC) to steady its aim by reaching over with its left hand. However, the toy cannot do this, so it serves no useful purpose here. The shotgun could be positioned to be held above the right arm, but it is only seen with it under the arm in the "DekaRanger" movie.

In both of these modes, the lights-&-sound on the Delta Squad Megazord is unaffected, and can still be activated as usual. However, activating the internal electronic movement sensor may be hindered by how heavy or awkward the combination is.

For those of you wondering what the differences are between the vehicle featured in the Space Patrol Set from "Power Rangers S.P.D.", and the original limited-release DX Blast Buggy from "Tokusou Sentai DekaRanger: The Movie- Full Blast Action", they're subtle but varied:

The Blast Buggy from the Space Patrol Set is fully compatible with the original DX Tokusou Gattai DekaRanger Robo toy from Japan. (The images I took prove as much!)

Alone, the Blast Buggy from the Space Patrol Set is a detailed and elaborate lump of plastic that has a big gun on its back. When you add it to a Delta Squad Megazord, the combo becomes kinda awkward. But, it is kinda neat too, and adds more firepower in the field. Overall, it's a good design, but not an exceptional one. I got it because it was an interesting upgrade.

Recommendation: you can do what you want with those two useless 3" SPD Ranger figures. The Space Patrol Set, useful in its own way, can serve as a temporary fix until you can get one of the rarer original DX Blast Buggy; it had more paint details and the spring-loaded shotgun. 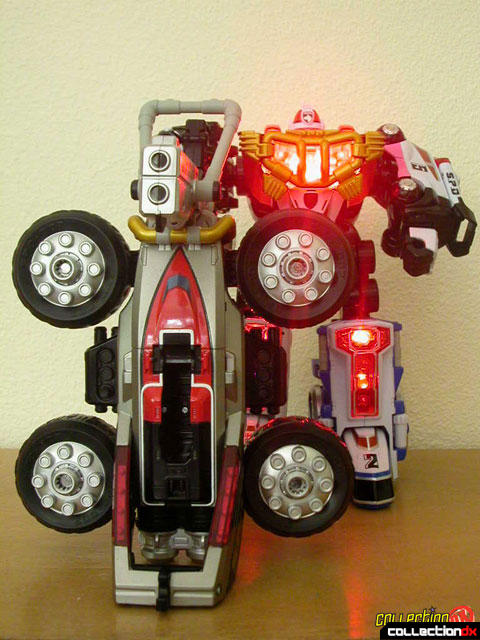 Ah! so this is the toy that I saw in my local toy store. I wonder what it is. I only saw the japan packing of this toy. But without the Deka robo, I think it is useless.

The Blast Buggy was only the second Super Sentai toy to be a film-exclusive- to never appear in the associated series. (The first- Gao Kong- was from "...GaoRanger: The Movie- Fire Mountain Howls", that that was just a repaint!) And, for the most part, it's fairly unique- a light armor & weapons upgrade for the DekaRanger Robo. It wasn't meant to be a major player, hence its simple design & function. But, I also think that it fits right in with the other SPD mecha. (I use it in place of the horrible DekaBike Robo...) In addition to that, what the Space Patrol Set's release did not include was the missile-firing option, but it's close enough that- like me- you can use it as a stop-gap until you find the rarer Blast Buggy.

While it is dependent on the DekaRanger Robo to show its full potential, it's also a nice little vehicle on its own- with good detailing, that big-ass cannon on top, and the nice big wheels to roll around on as well. This thing'll even conquer carpet which most Super Sentai mecha can't claim!
------------------------------
CollectionDX Staff

Is the Japanese version of Blast buggy? If so that is the one I saw. The store sell it for 25$.