Aside from the RX-78-2 Gundam, there aren’t too many kits I’ve done more than once. That was until Bandai released a line for the Gundam SEED ASTRAY comics. Since then I’ve built the standard MBF-P02 Red Frame twice; my first one became the Gold Frame and another to replace the original. Then Bandai extended the line with the Gundam Astray Blue Frame Second L. For the C3 Convention of 2005, Bandai produced a copy of the “Second L” but in red plastic, making the ‘unofficial’ Gundam Astray Red Frame Second L (yeah that’s a long name). Finding it was easy, but getting it took some time. 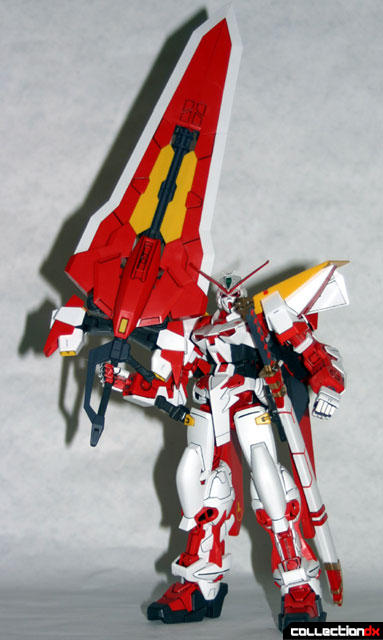 The kit itself is identical to the original Blue Frame model released by Bandai. Its packaging was a solid red box with the GUNDAM SEED MSV logo branded dead center. The color for the kit was as it suggests; Red. There are some differences though, aside from what was blue is now red, what was orange in the Blue Frame was now yellow. Other than that the colors remained the same, grey is grey, white is white. A simple short cut, but not too stressing was the booklet and the marking decals were exact copies of what comes standard in the Blue Frame kit. For future bashing purposes, I now have spare ‘Serpents Tail’ insignia decal. 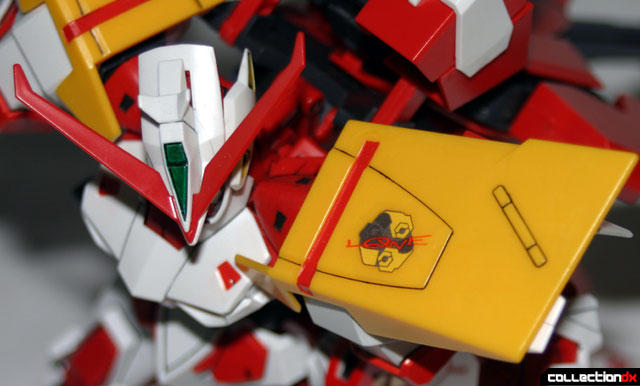 The Astray 1/100 scale models have some of the best construction I have ever seen. Extensive but simple, the building this kit is exactly the same as the standard release BFSL. In any situation, red parts more often enough show signs of runner scars, the same could be said for the dark grey parts and often white parts as well. A virtue however, is the pre-existing trend in the Astray: Bandai’s ‘cautionary method’ with parts connected on their underside to prevent scarring on surface parts.

“There are many like it, but this one is mine”

While construction went by the book for the Blue Frame, I wanted to do something that made this kit “RED FRAME,” Lowe Gear’s Astray Red Frame. I did this in two steps, markings and weapons. While replacing the Red Frame that became Gold Frame, I saved the “Junk Guild” decal that was meant for the shield and applied it to this kit. Since I couldn’t center the finger nail sized decal on the chest (like the Blue Frame kit suggests), I put it on top of the left shoulder plate. That way it’s more visible and it doesn’t risk smudging or scraping. 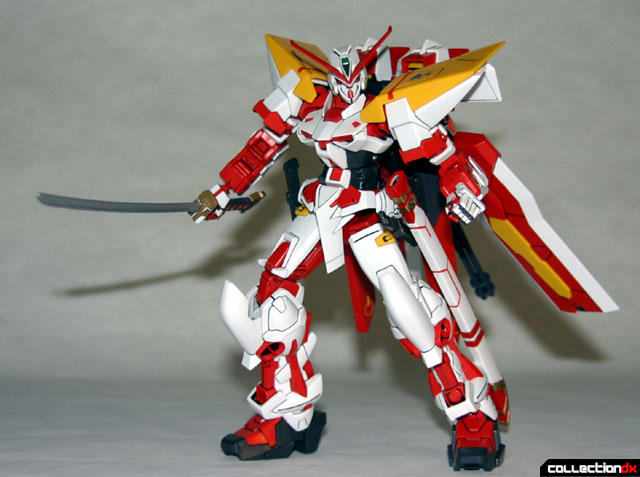 While the Second L already has an extensive arsenal of blades (two in the toes, two daggers, and the whopping Anti-ship sword/Gatling gun combo in the backpack) Red Frame needs the Gerbera Straight. When I started working on my second Red Frame, I tried something I hadn’t done before and completely stripped off the electrostatic chrome. It was simply using the right mix of dried paint solvent and enamel thinner. The drawback here that can happen is that both mixtures tend to melt the plastic, so working fast and with some water to dilute the mixture, I came out with a perfectly clean blade I then sanded and sprayed down. After a few hours of drying and some touch ups with a hand brush, my Red Frame Second L was armed with a full arsenal all of its own. 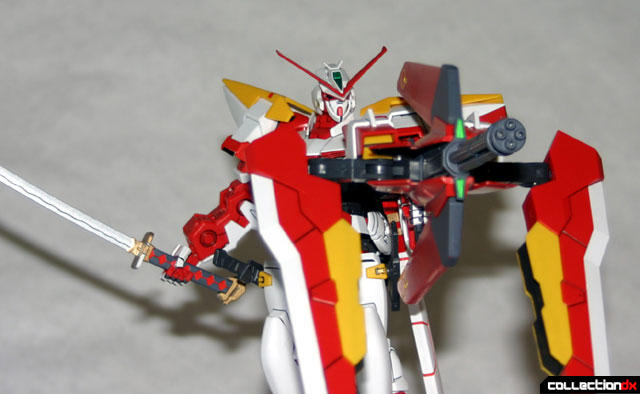 The last additional change of pace was the paint work on the hands. While I love the Astray kits, the one thing I hate the most is the hands. The design is great, the detail of the palms are good, but mixing white paint and primer coats on colored plastic (red in this, blue in the former version) is a real pain. While painting the back of the fingers, I was cautious to the knuckles, but paint always has a way of running. Since using stripper has a stronger chance of eroding the parts, I opted for a more appealing solution and painted the knuckles grey. While it adds a third color to the equation, it adds some more detail to this special kit.

While getting the kit can be near impossible outside of Auction sites, or over priced dealers, there are some chances you can get lucky. While I can’t say “GET IT NOW” that’s hardly the case for any exclusive. Even so, the Second L in its original, Blue Frame form is still a worth while kit.