Y-MSF came onto the Godzilla vinyl scene in 2004, becoming notable for releasing relatively unpopular characters such as Varan, Minya and Gabara. Most notable of their initial releases was a 6-inch scale Hedorah, released right at the beginning of the still strong Hedorah vinyl craze. While Y-MSF themselves only released unpainted figures, the Japanese toy store Guranma, through an exclusive deal, released painted versions that were also sold exclusively by the U.S. web-site Temptingtoys.net. Before closing in 2007, Guranma released a lot of variants: Glow-in-the-dark and clear vinyl, metallic paintjobs (Which proved unpopular) and standard figures with clear components, the latter of which I’m reviewing today. 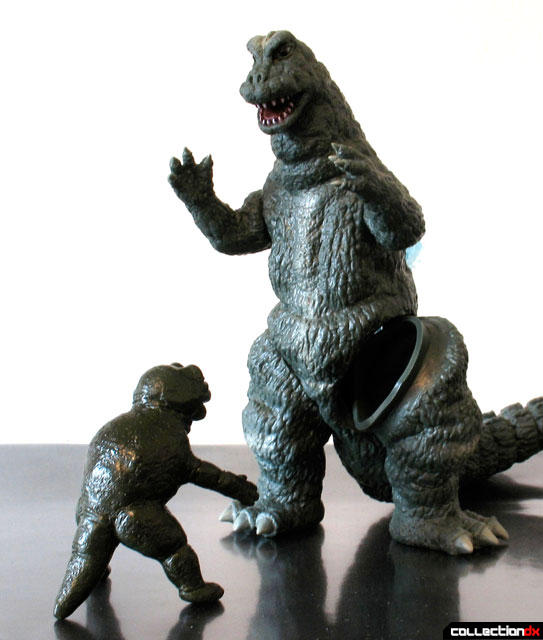 Bagged with a header card, this figure set doesn’t have an official name, but it’s essentially the ‘Y-MSF Godzilla 67’ with infant Minya, clear spine Guranma store exclusive.’ A perfectly jumbled name for figures of the, hands-down, most repugnant Godzilla suits ever made.

Godzilla and Minya both hail from the 1967 feature film, ‘Son of Godzilla’ If you hadn’t already guessed, Minya is Godzilla’s bratty, pug-ugly son, who’s regularly showered with malice by fans. It’s a fairly solid entry in the series and, despite the child-friendly tone, has some rather eerie moments, especially the ending, which is uncharacteristically melancholy. Minya has 2 forms in the film as an infant; a bulbous wire-controlled puppet, and as a toddler; portrayed by a suitmation actor. 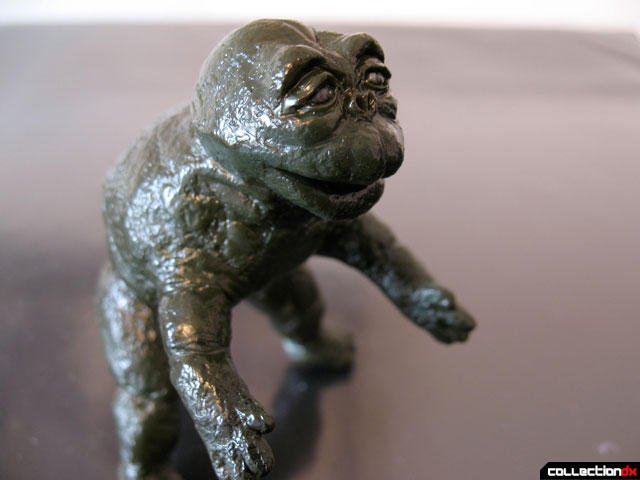 Visually, these figures look pretty great. The infant Minya, 3” tall and 2.5” long, looks just as roly-poly and bizarre as he did in the film and is perfectly in scale with his dad. The texture of the skin, the vacant expression and the, obviously supported by wire, arms are dead-on. The open mouth is a nice touch as well and makes it look like Minya’s in the midst of making one of his bizarre, “Wah-waaahn” sounds. It features no articulation, but doesn’t need any as it can stand solidly on its legs, arms reaching out in front, or crawling on all fours. Also, Minya can steadily rest ‘gripping’ onto Godzilla’s tail, as well as on Godzilla’s shoulders, like a piggyback ride. The interaction between the figures was definitely thought out and works well.

The main drawbacks are the paintjob and the trademarks. Infant Minya’s cast in dark, forest-green, hard vinyl with gray eyes. The green seems to consume the sculpting detail as well as the paint of the eyes, and makes it look muddy. I have to mention that the standard releases features Minya in a more movie-accurate lighter gray and tan, which probably benefits the sculpt. The trademarks are typical and sculpted into the figure, but there’s a lot of text and it covers the entire belly. 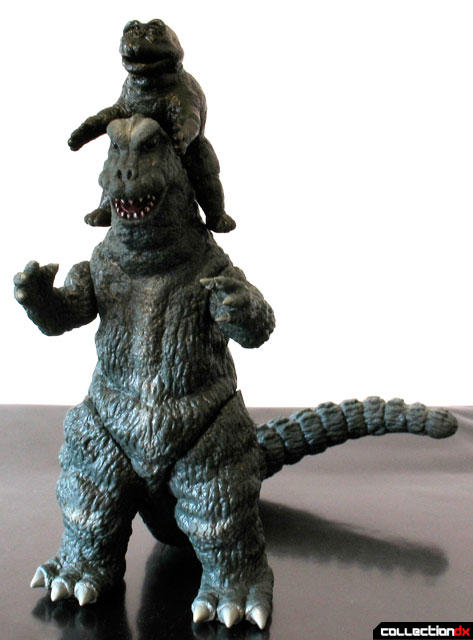 Though Minya’s an enjoyable figure to have, Godzilla’s the obvious star of the show. The costume design is very rare in toy form and looks completely movie-accurate here, down to the last hilariously ugly detail. What’s distinctive about the design is the huge head, high angled brow line, heavy eyelids and almost pig-like nostrils. The strange thing is that the face really does look parental to me… 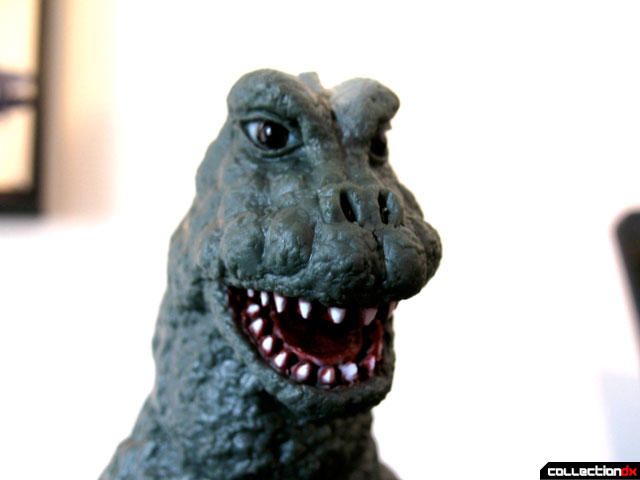 …Don’t know what kind of Freudian land mine I just stepped on, but moving on! 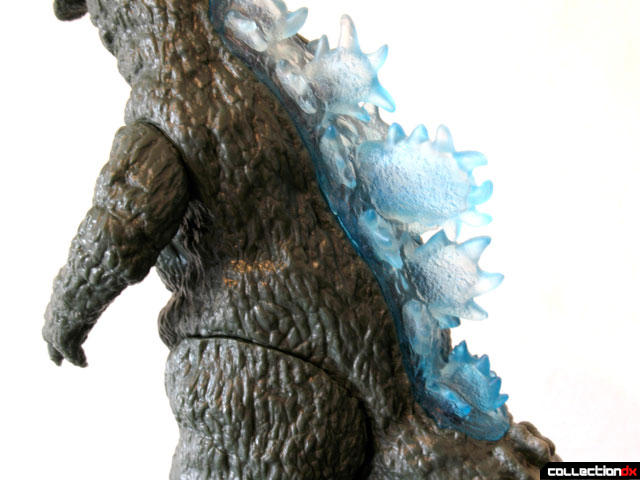 Standing just under 7” tall and 6” long, its cast in soft green vinyl with gray highlights, with painted details for the mouth and eyes. The inside of the mouth is a little too rose colored for my tastes, but works fine. The eyes catch light well, which adds a sense of life. The exclusive aspect of the figure is the translucent blue spines. This is actually a separately cast piece which fits flush into Godzilla’s back and creates a look as if Godzilla’s charging up for a blast of atomic fire. The section won’t come loose but it can be easily removed. The curves at the edges of the spines lack the rocky detail of their centers, which makes them look soft and jelly-like, which is strange and due to the translucent blue vinyl. All in all though, it’s a very nice effect and immediately adds a distinctive quality to the figure. Godzilla’s articulated at the tail, arms and le- 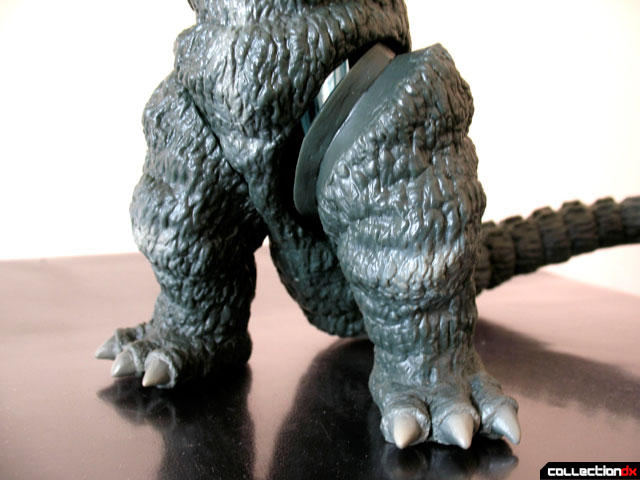 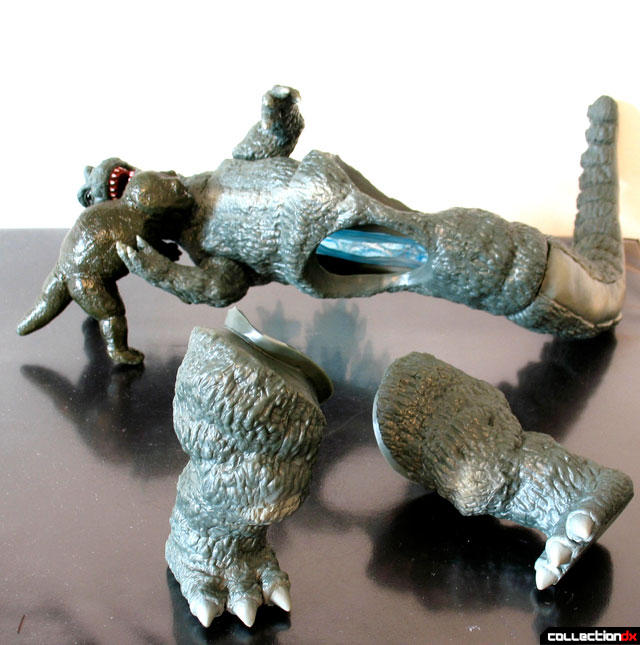 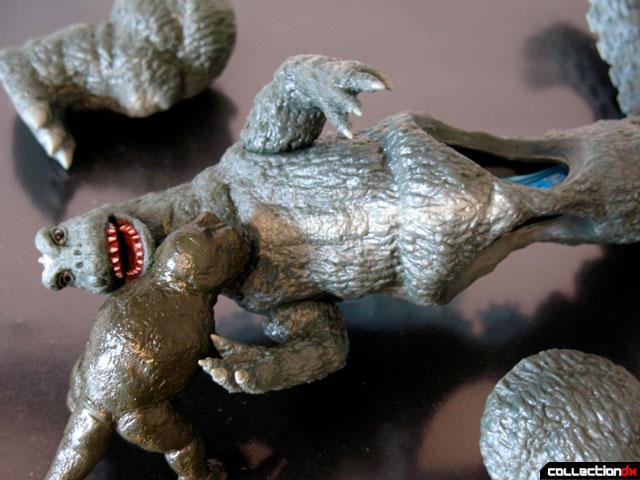 Welp. You can’t move the legs. You WOULD’VE been able to move the legs had there been the appropriate amount of vinyl to set it within the joint, but tragically and hilariously there isn’t. The legs will pop out when you move them more than 45 degrees. It really doesn’t ruin the toy for me, but maybe you’re part of the subculture that poses all of their figures delivering flying kicks and this is a deal breaker (I really hope that subculture exists.) 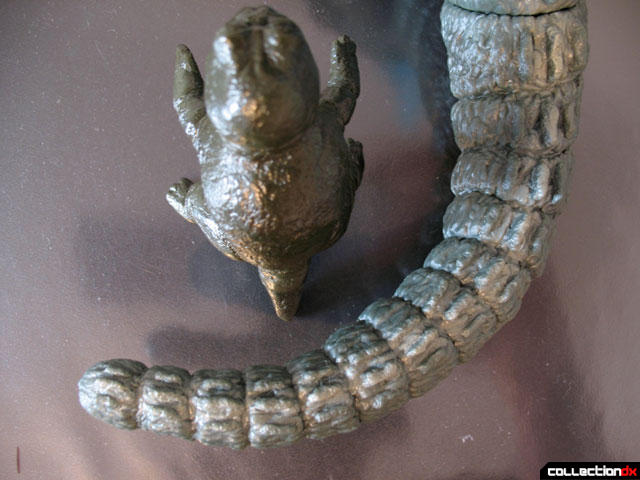 This is the first Y-MSF figure I’ve owned and I’m not disappointed. The infant Minya looks perfect, though I wish it was lighter colored, and the Godzilla 67’ is a wonderful representation, even better than the Bandai 50th Anniversary Memorial Box version in my opinion. Sure you can’t move Godzilla’s legs, but the main play value lies in the interaction between Godzilla and Minya, which is a definite success. I’m not sure how much this originally sold for but I was able to get it for $18 before shipping from Kaiju-Taro.com, which I think is a great if not perfect price. Temptingtoys.net still sells the standard version of the sculpts for $50 after shipping from both their site and eBay. Although Y-MSF’s figures are made in limited runs ranging from 30-500 pieces, unless you’re dying for Godzilla 67’ and Minya, I wouldn’t say they’re worth the retail price. The quality is about on par with 6-inch Bandai kaiju and I think the price should reflect that. That being said, this is a good set, especially sculpt-wise, and I’ve heard Y-MSF improves their figures with each subsequent release. Even though there are rumors of them quitting Godzilla toy production, they’ve announced on their site many new figures, including Gorosaurus and Biollante! 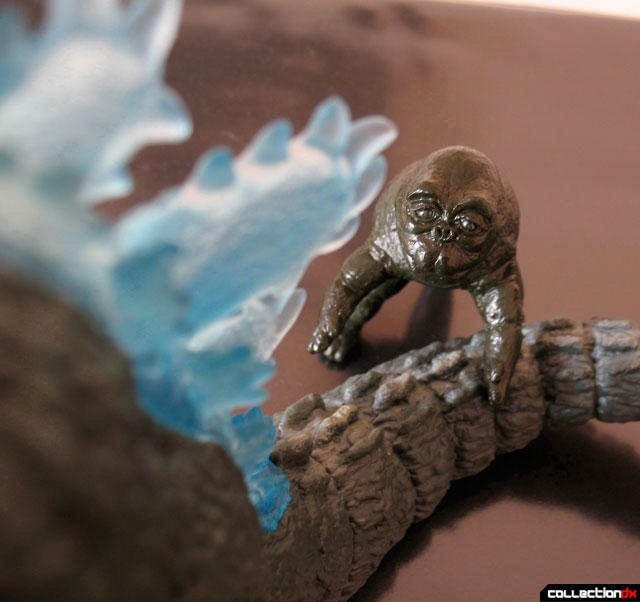 If you’re interested in getting the Y-MSF Godzilla 67’ with infant Minya, clear spine Guranma store exclusive, they may show up again at Kaiju-Taro.com, otherwise I would check eBay or Yahoo Japan. To check out the standard release, along with other Y-MSF Godzilla kaiju, go to Temptingtoys.net. 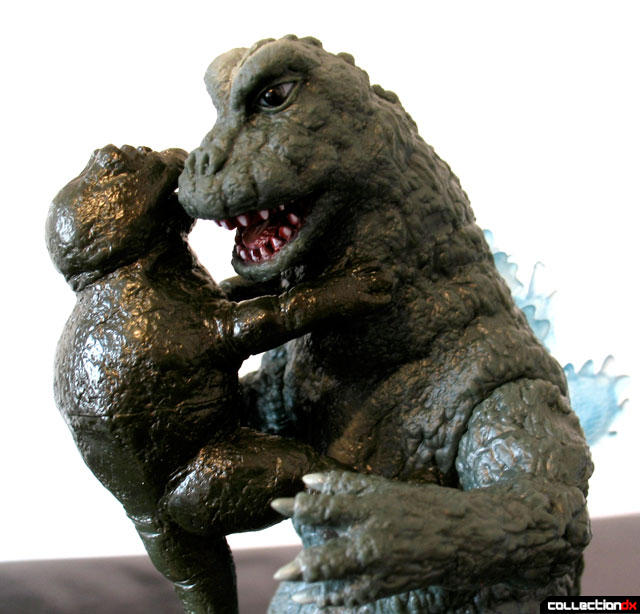 I've dug Y-MSF's offerings for a little while now...specifically because they drop ill sculpts of totally obscure characters. Early on, I picked up the translucent green version of their King-Goji (Godzilla 1962 from "Godzilla vs King Kong").

Very nice...but the legs were attached with rounded triangular plugs! You think your Godzilla's legs are in rough shape! Basically, they're just attachment points...never meant for articulation.

Anyway, a Y-MSF Biollante would be hot...and I gotta get one of their glowie Gabara's. This article has inspired me to review my standard Miniya glowie that I sprayed up with glow paint...stay tuned!

Funny that you mention the King-Goji 'cause I was originally planning to pick that same one up to customize, going for the same effect as the Musuku-Goji I reviewed, but then of course I found the Musuku-Goji which saved me the trouble.

Yeah, Y-MSF's a little confounding. The sculpts are great (I also can't wait to see what they do with Biollante) but 'rounded triangular plugs' sounds pretty nasty. Moreso, it's interesting to find out there's multiple styles of these clumsy attachment points.

Anyhow, thanks for the support, Sanjeev, and looking forward to that review!

Sanjeev, you never fail to confound me. You hate Bandai vinyls but like these similar scale and sculpt toys...at about a 300% price increase?!?! Yes, I know they release more obscure kaiju (and glowies) but the whole appeal (or most) of that is to satisfy the Bandai collector (which you are not) for whom there is no official release of those kaiju! Furthermore, it seems to go against what you normally say about modern vs vintage gokin. Bandais are cheap, simple toys designed to be played with by children and Y-MSFs are a higher priced collectible with the adult in mind. One would think you'd prefer a Bandai, but no. I guess I'm just not sure why the "bizarre microcosm that is vinyl" gets a free pass from you in this regard. Bandai kaiju are "toys mass-marketed to actual children".....right now!! So on your way home from wherever you are now, stop in a CVS or a Newbury Comics and get yourself a Bandai! :)

Allow me to continue my overanalysis of my toy tastes! No, I can't just leave it alone and say "I buy what I like!" ;)

Anyway, like many things in life, you can't always rely on rigid mottos or slogans, Nekrodave! Yes, I love mass-produced toys intended for children, but I find modern Bandai sculpts utterly devoid of soul. The hyper-realistic sculpts and prone positions just don't do anything for me. I *do* respect their cheap cost and accessibility to young people, though...no doubt.

To tell you the truth, it's not like I'm in total love with Y-MSF. The thing about them is, like you said, their obscure characters. I mean, come on! Where else am I going to get a glow Gabari??? The M1 sculpt's okay, but it's only shot in a couple colorways (no gid). And don't get me started on the Bullmark-reissue Minya...makes me want to vomit (sorry, M1)!

The other thing about Y-MSF is that, while their sculpts are ultra-realisic, they're extremely soulful. Sure, they're less toy-like because they're mostly fixed-posed, but those poses are fantastic. They really capture the dynamic sense of the character straight from the movies (not just the prone/generic stances of Bandai vinyls).

Of course, having said all that, I still would ideally prefer a standard sized (9") Bullmark-style sculpt of these obscure monsters. Now that's soul...and it has nothing to do with capturing a particular stance or posture from the movie.