Fast and The Furious 1970 Dodge Charger

I am sure that anyone who loves cars and street racing has seen at least one of the movies from the wildly popular "The Fast and The Furious" franchise.

I love the way these movies mix different styles of cars, from import tuners to classic muscle cars and everything in between. None of the vehicles are as memorable as the muscle car star in the first Fast and The Furious movie. Of course I am talking about the 1970 Dodge Charger owned by Dominic Toretto (played by Vin Diesel).

The Charger is painted black with chrome rims. It sports a gigantic 426 cubic inch Hemi engine with a roots style supercharger and fuel injection, along with some serious nitrous oxide. The car also has a heavy duty 4 speed manual transmission, Dana 60 rear end with gearing set up for the drag strip. Now that's a serious power package!

This car also has all the safety features required of a 9 second quarter mile drag car: 10 point roll cage, bucket seats, and safety harnesses. Lastly, most of the interior is done in sheet-metal, and there is no rear seat. 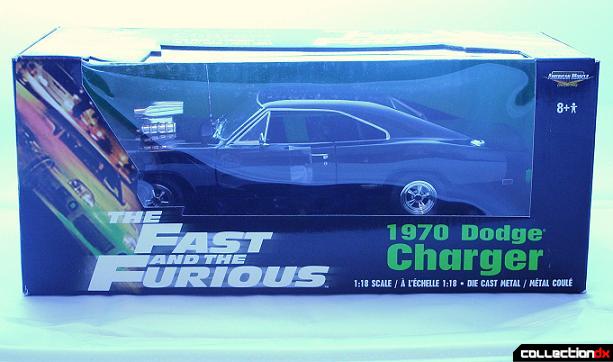 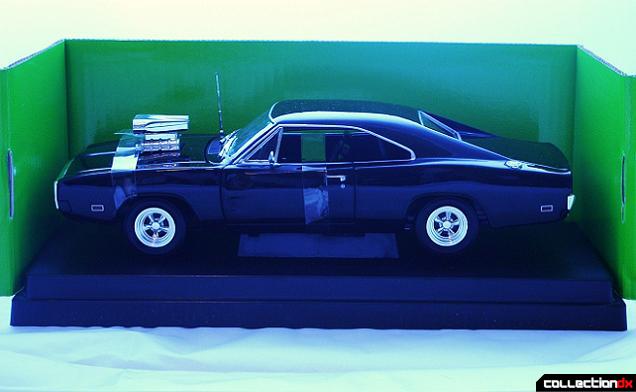 Now about Ertl`s 1:18th scale die-cast replica. How does it compare to the actual movie car? Well, I like the overall quality of the replica especially the paint work. Also the undercarriage is very accurately detailed. The engine bay is where we run into a bit of a snag. When you open the hood, you are not greeted with a mammoth supercharged 426 cubic inch hemi engine, but rather a supercharged 440, which is nothing to sneeze at but is a different engine altogether. 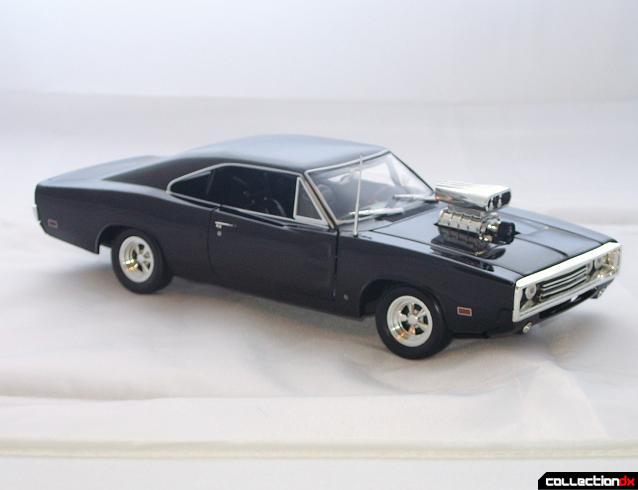 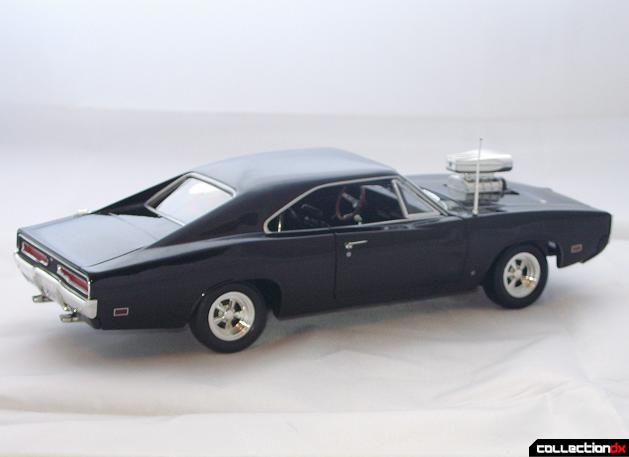 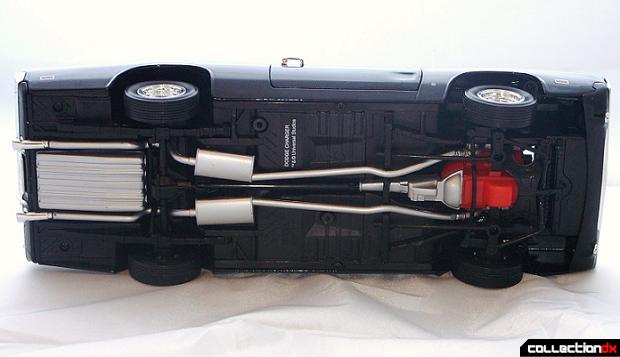 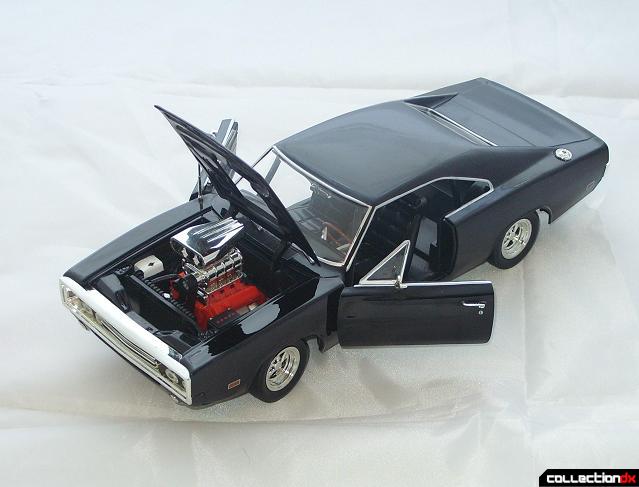 So I was a little disappointed with the engine bay. Not only does it have the wrong engine, Ertl left out alot of the most rudimentary detailing, like spark plug wiring or plumbing for the injectors. Overall, as far as the engine compartment goes, there is room for serious improvement. 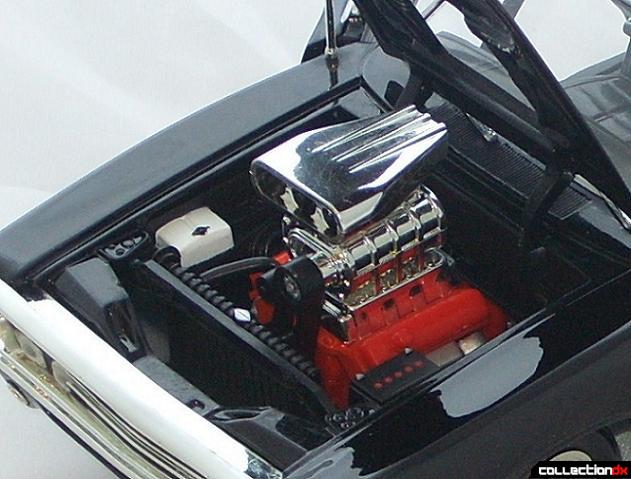 I feel that the reason for some of the difference`s in the real car and this replica is the fact that this was a re-release of a earlier car by Ertl called a 1970 Charger street machine. So, I figure, to save on the tooling costs they cut a few corners......BAH! 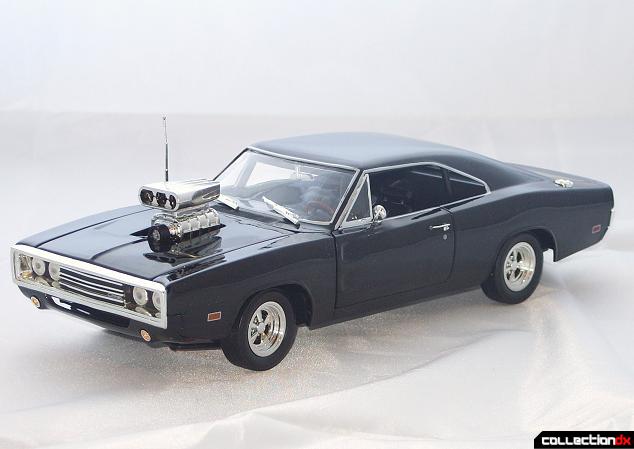 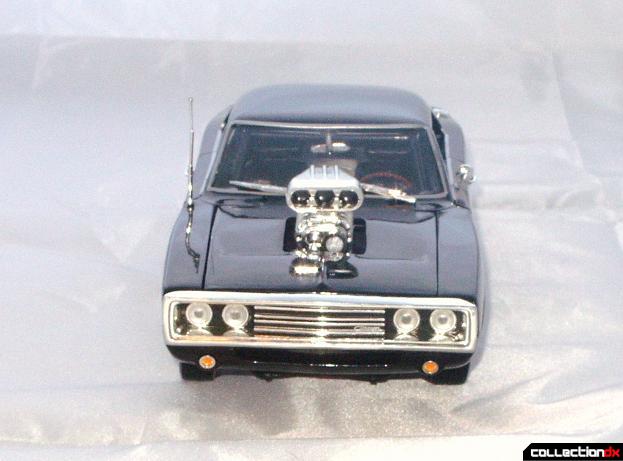 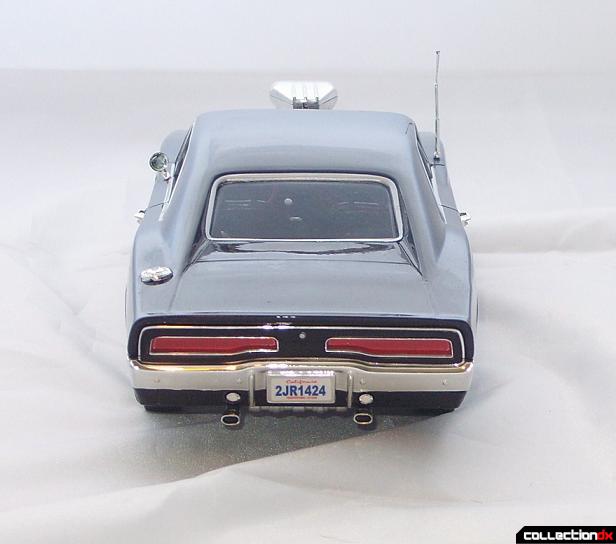 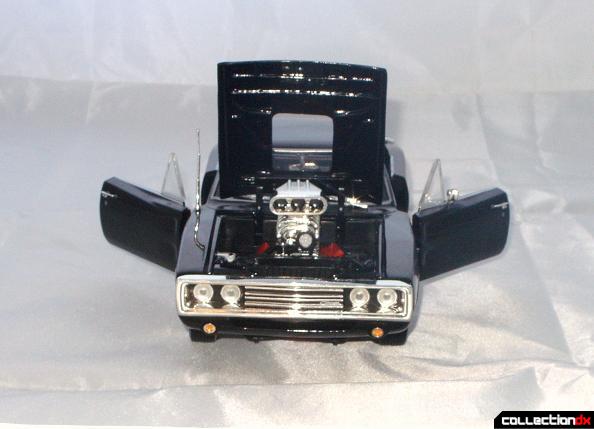 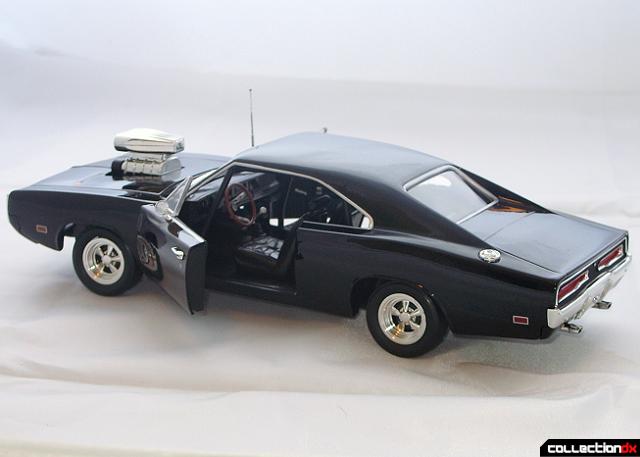 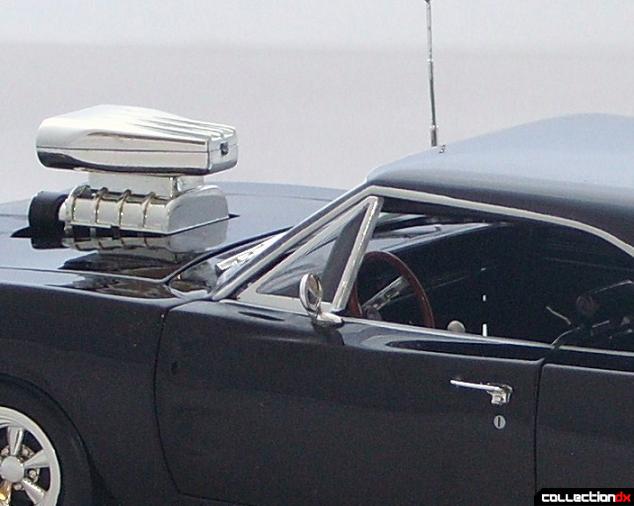 Don't let me mislead you, The car is still a great toy featuring an opening hood, opening doors, functional steering, accurate interior, roll-cage. The model is made from sturdy die-cast metal, plastic, PVC and rubber. Making this model not just a nice replica, but it is also a nice solid toy. Case and point: When I was not around my 8 year old got his hands on it. Unbelievably it survived! All I had to do was rub his finger prints off the paint and throw back on the shelf. Having this little scare happen, made me totally satisfied with the ruggedness of this car. But, maybe I was lucky, LOL, so I hope he doesn't go after it again!

With that aside I would have to say this is one of my all time favorite cars ever. That is unless Ertl was to make a 1/18 scale replica of Blade`s 1968 Charger, now that would be freakin' bad-ass.

I would suggest that if you are a fan of cars to check out the rest of the series, especially part 4. Which is probably my favorite movie is the franchise so far, yes the 1970 Charger is back and badder than ever.

I definitively would recommend this car as a "must have" addition to your die-cast collection.

22 comments posted
good review, but to me this

good review, but to me this stretches the limits of what I would think is related to the content of the site. It's not nostalgic, nor is it character driven. The movie kind of stupid as well.

nice review but no sci-fi or fantasy bent...no reviews please of the the General Lee or the Starsky and Hutch Grand Tourino, or Scarface's Grand Prix,,,
Question what about K.I.T.T or K.A.R.R...they seem to fit because of A.I aspect to car...

I'm right there with ya on all of that, apex3.

No, the lunch box did that...not this.

Yeah, Its a good review but I agree that it does not fit the site, but since its here I'll make a comment. I dont have this car, but I too am surprised that ERTL did not at least retool the engine. As a car guy, Fast and Furious in general has never gotten any of the technical things right, inside or out of the movie...even the toy franchise has errors. Dont even get me started on Tokyo Drift. As a professional drifter in real life, I think they have made a joke out of drifting, and yet somehow I have seen all the movies, go figure

I think this one is a really close call. If it didn't actually say "Fast and the Furious" on the packaging, I would definitely say it didn't belong. It could be the exact same toy but for some reason, that makes the difference to me. Since the product is media driven, I think it's ok. For movies like that, the cars usually are the characters. (Granted, I haven't actually seen the movie myself... ).

OK, I have to jump in here. We had a poll about cars on CDX and from this poll you can clearly see that more people wanted 1/18 scale cars on CDX as long as its Movie, TV, anime related or pop-culture, than those who didn't want it at all. Like it or not, "Fast and the Furious" films have a very large following so that makes it pop-culture and its a movie! It fits the criteria in my book. Great review Phat Boy! Cant wait for the Mad Max interceptor review!

I have a suggestion?

and all these model car enthusiasts/collectors would get to post their prized collections on the site without getting oppressed...oops! that was a little intense... I meant dominated!

ooooooh Mad Max Interceptor!! Ok, I gotta say I am looking forward to that!

Me hopes somebody posts a review of that scaled down BLACK HUMMER H2 from the GI Joe: ROTC Movie by Mattel!

I would rather get kicked in the groin than watch this movie again. It seems like something created by the Russians to lower our kids' test scores.

Although I enjoyed the movie for what it was (a "turn off your brain and have fun" flick), I gotta agree that a review of one of the cars doesn't seem to fit CDX at all. It's not quirky, vintage, Japanese, sci-fi, or anything else that remotely resembles the other reviews here. (KITT, BTTF DeLorean, etc all seem fine due to the sci-fi element.)

The only other review that seemed as out of place was the recent Halo game review. That was certainly more on-topic for CDX, but it seemed odd to review something that has already been reviewed on dozens (if not hundreds) of other sites. Other than the author practicing his writing, I didn't see the point.

Both reviews (car and game) are of high quality (particularly the game review), but both are real head-scratchers.

So what does it turn into?

In my opinion anything involving Vin Diesel should be considered sci-fi because he clearly does not exist.

A Formula One car of course! Isn't it obvious...LOL!

I got that one right here!

That would be awesome. Just like the Batmobile from Batman Returns.

I think this review is totally out of place here...Nice review but why am i reading about a toy based on the Fast and the Furious?! Lets get back to roots boys...giant robots, anime, sci fi collecting goodness.

Great review. One thing I'm disappointed about is that they don't really make cars look this good anymore. Nowadays most of them look alike. I don't even like the style of the new Camaros. However, I do like the body styles of the new (or new-ish) Chargers, Mustangs, and Challengers.