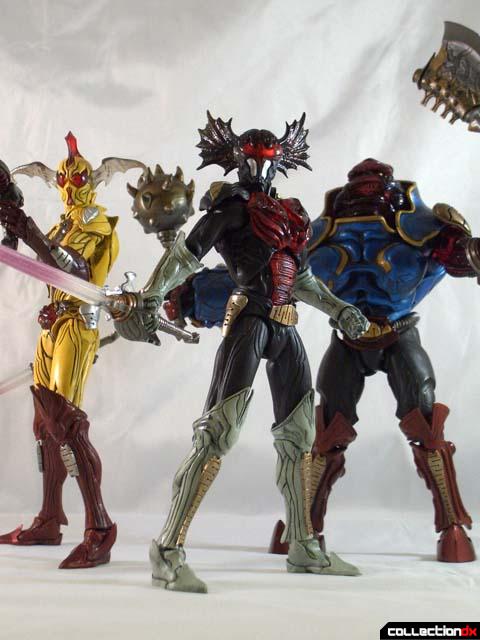 The TV series was 38 episodes long and aired between 1975 and 1976 in Japan. I very vividly remember the characters of Akumaizer 3 as they were in that mix of shows that I was first exposed to on Channel 13 (KIKU-TV) in Hawaii when I was 5 years old.

So enough about the show itself, let’s talk about these toys. Super Imaginative Chogokin is a line from Bandai that takes tokusatsu characters and re-imagines them with newer, edgier designs. 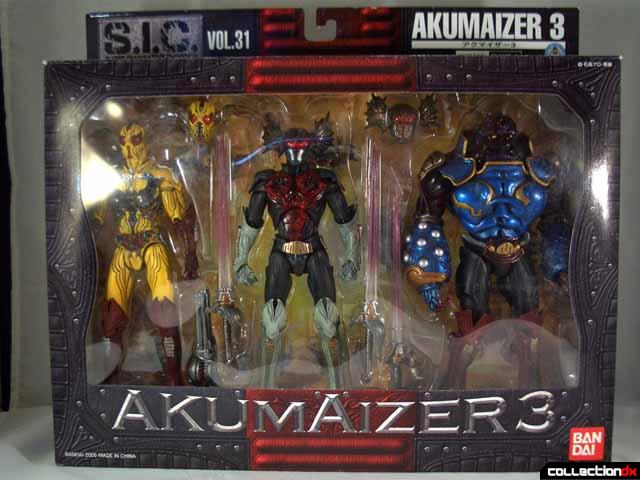 The three figures come in a cardboard box with window and are all packed in a vacuum formed tray with all the various accessories arranged neatly in the tray below the figures. The figures are each in the 8-inch tall range so when the box arrived it was much larger than I had expected. 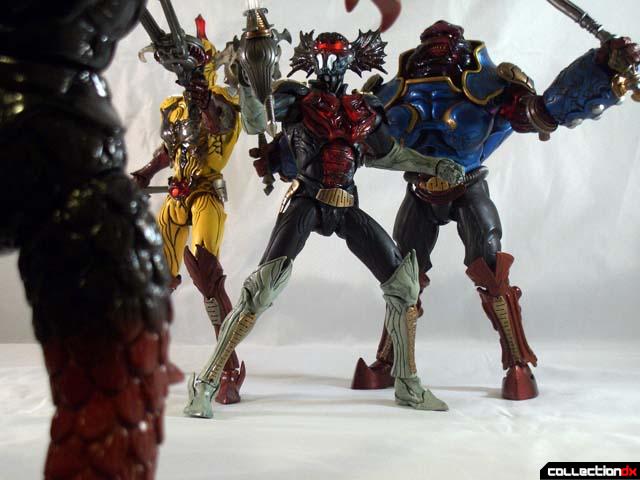 For a series that is called Super Imaginative Chogokin there sure isn’t much in the way of Chogokin here. While the figures feature excellent design and decent articulation there is very little metal on these. Diecast is designated to some of the tiny bits like the belt buckle and hip decorations as well as the hilts of the weapons. That’s it. The rest of the figures are all plastic. 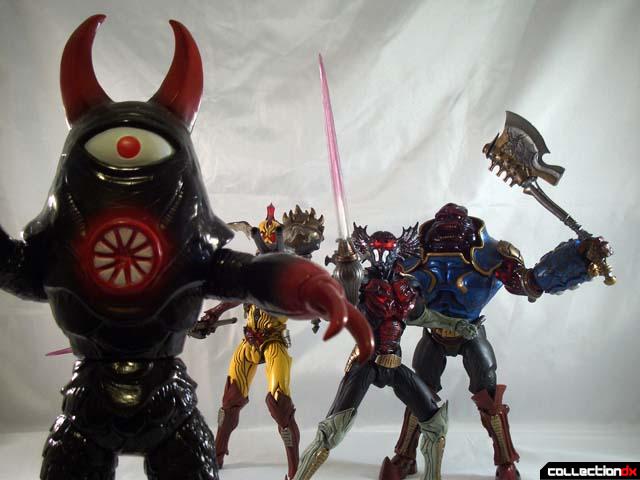 Despite that shortcoming, the figures really are very solid with a very high level of detail on each and everyone in the set. 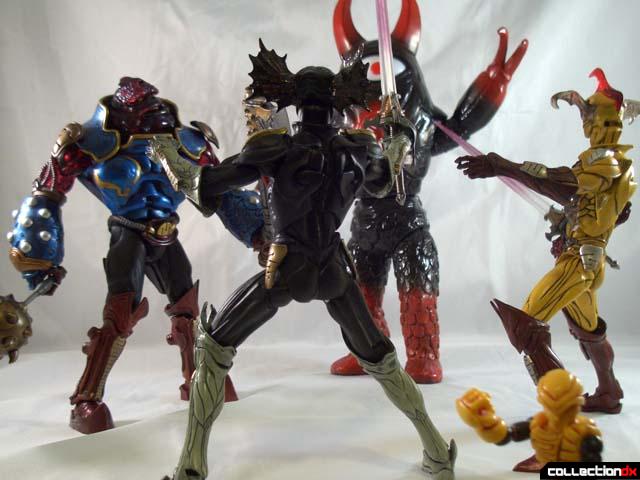 Zabitan was the central character of the show and in my opinion the coolest looking of the three. The redesign emphases his demon heritage more than the original character making him look edgier and darker. 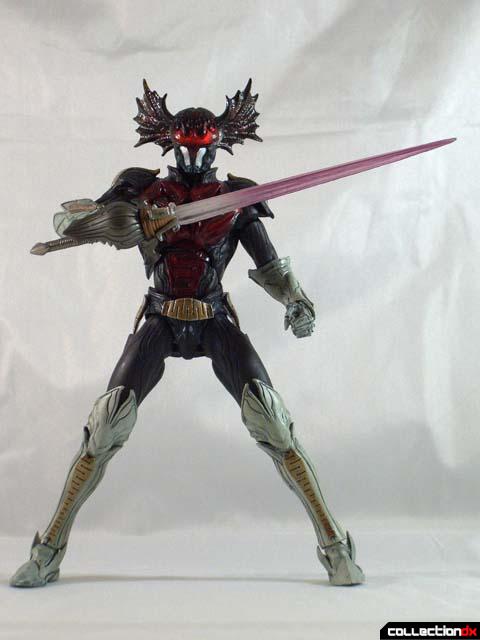 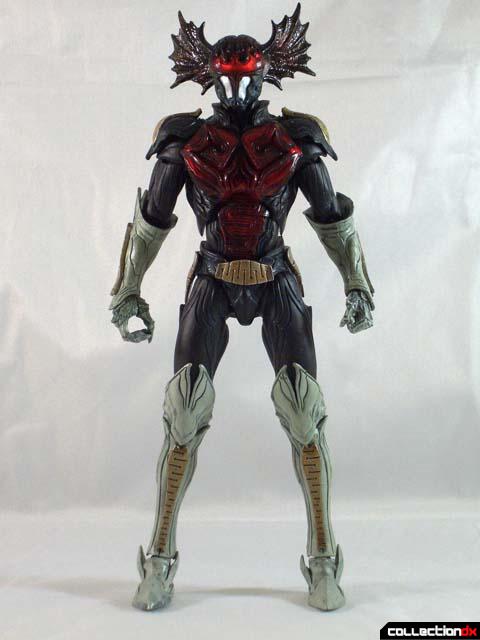 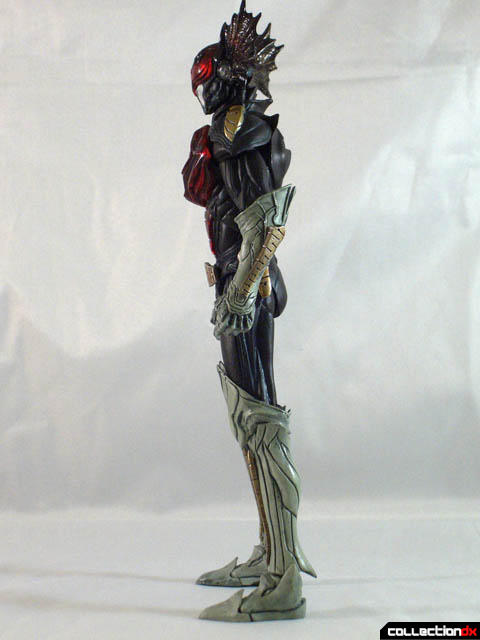 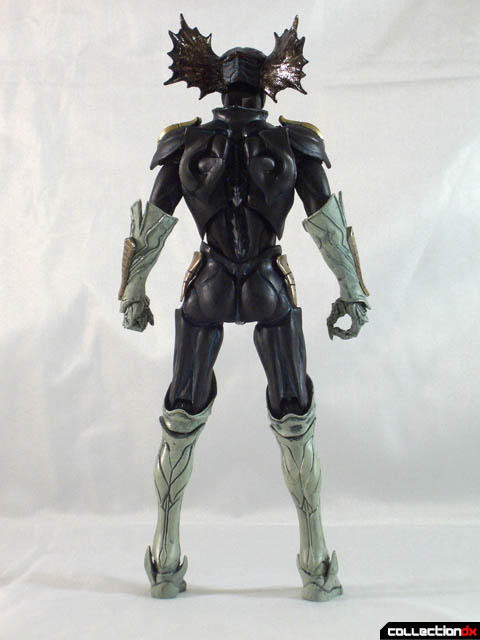 In the original show, Zabitan’s helmet/face would crack when he was presented with a talisman of his demon heritage. 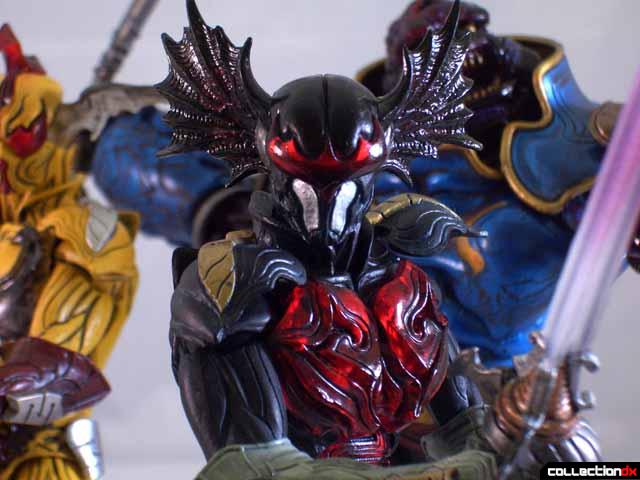 Bandai includes several alternate heads which strike me as a direct nod to this little piece of show history. 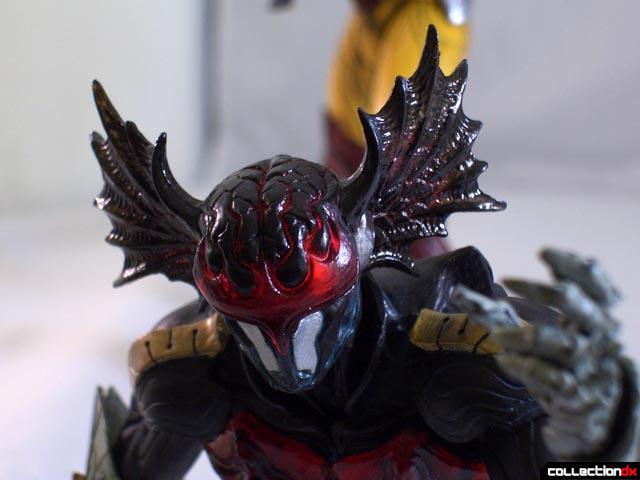 You get a normal standard head, a head that has cracking happening in it and finally a full-on demon face. 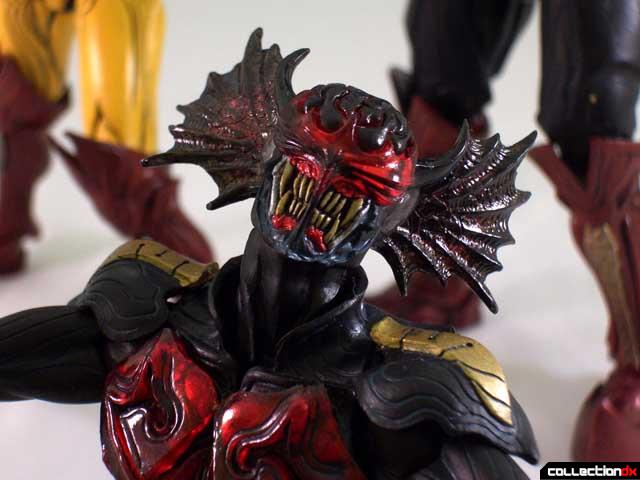 Ibiru was the sharpshooter in the group. His sword would transform into a gun and his aim was never off. Again the redesign here brings out the edgier, darker look of the character. 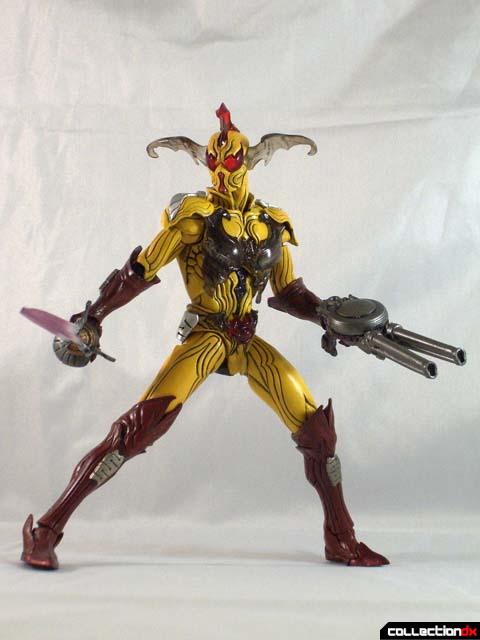 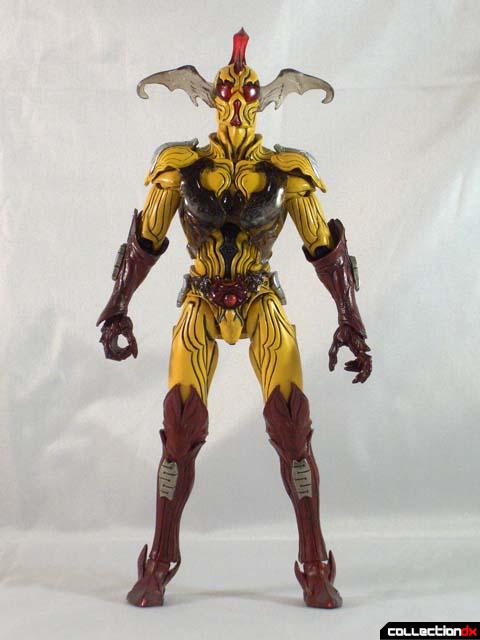 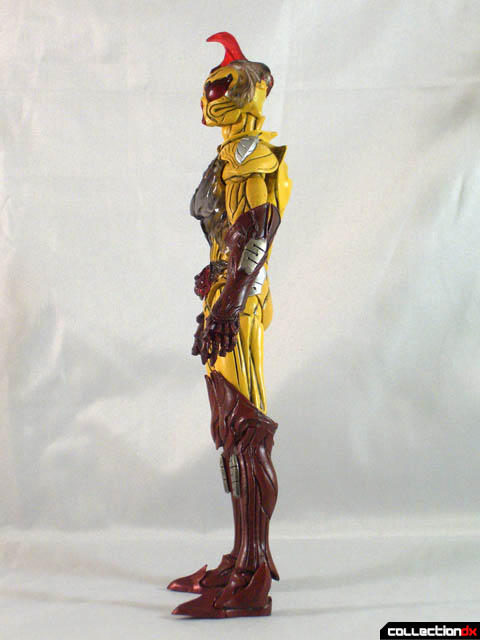 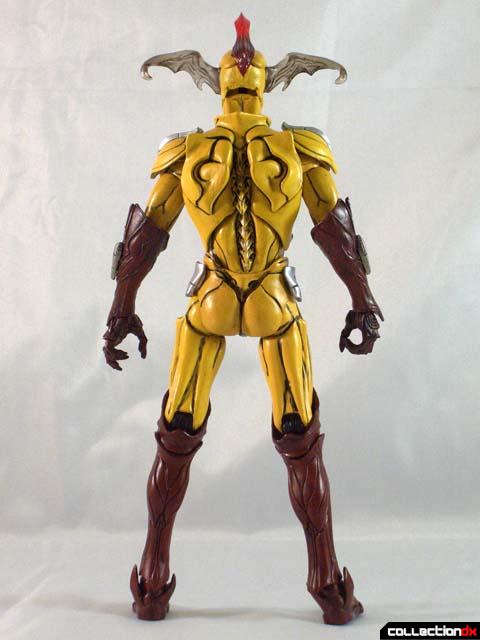 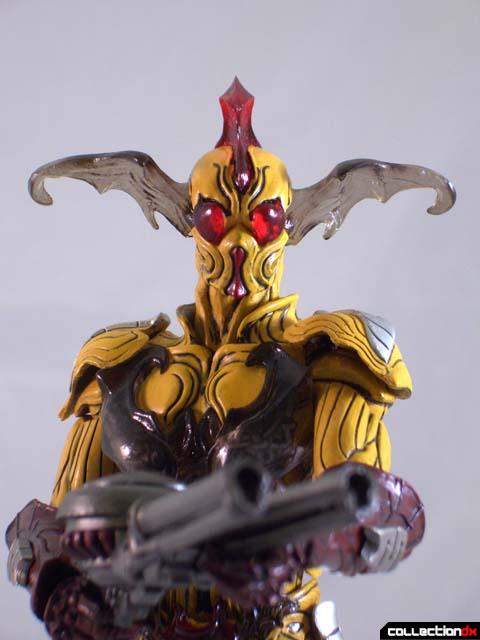 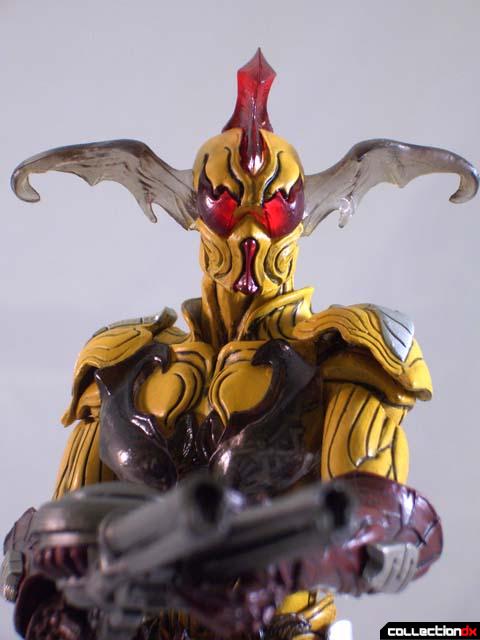 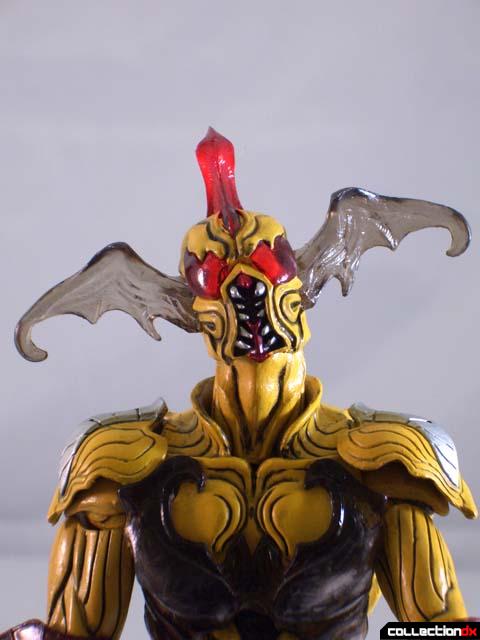 Gabura is the big, hulking blue guy. In the show he was a bit more of the comic relief as well as the “strong man” of the group. He, like the other characters, comes with a sword but favors his ball spike and hammer; instead of a hammer, we get a HUGE axe. Unlike the other figures in the set he doesn’t have alternate heads. But if you open his mouth he looks equally menacing as the other two with their demon heads. Of all the characters in this set he looks most like his original design. 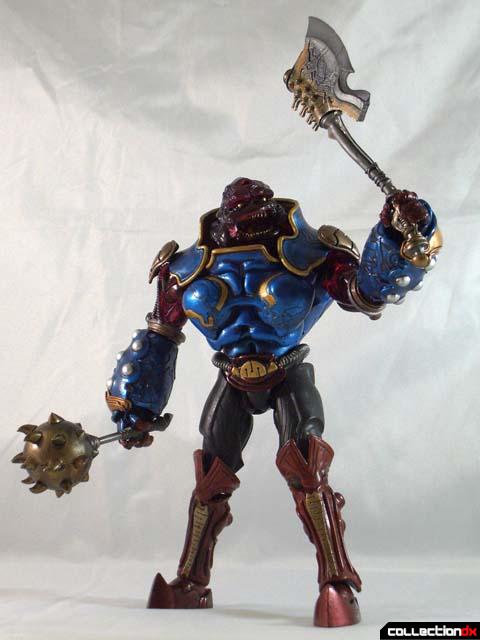 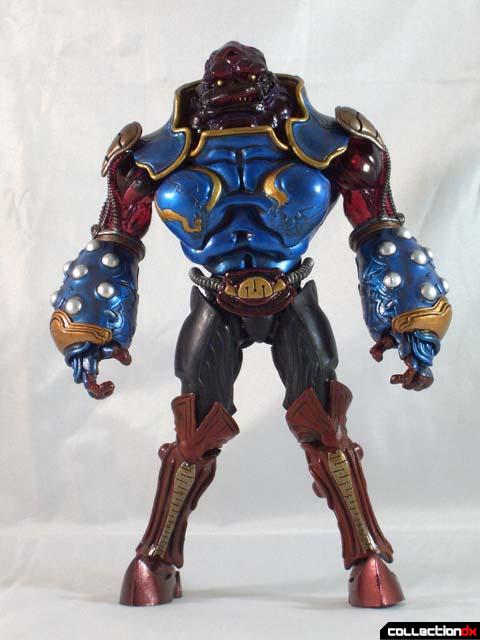 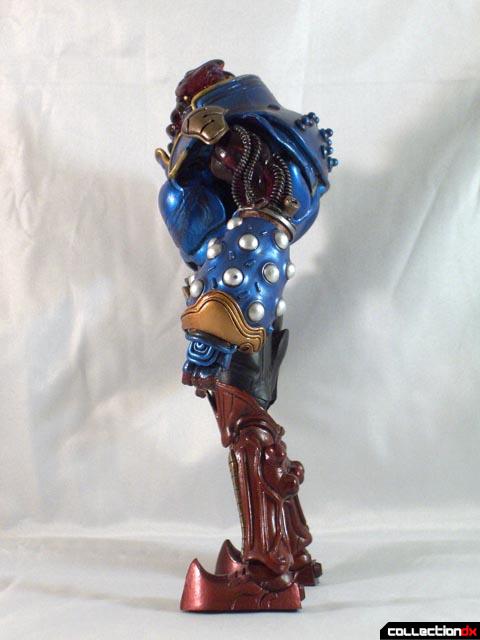 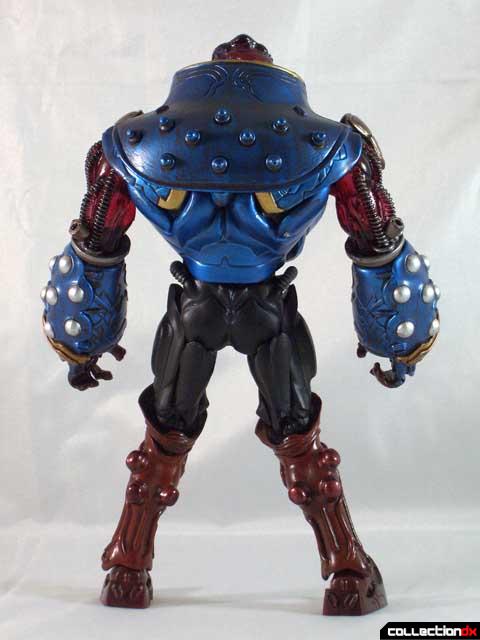 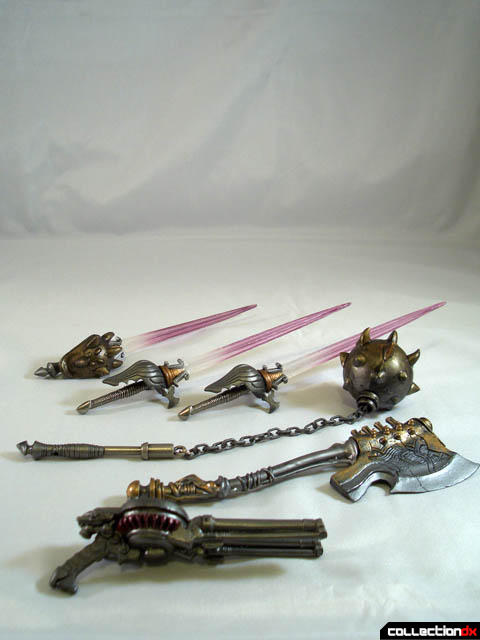 It’s a nice set that any fan of the original series will like. While it doesn’t contain much in the way of diecast (despite the toy lines name) the sculpt detail is above average and the figures pose beautifully. I suggest you go get yourself a set if you liked the original show and for everyone else it’s a worthwhile investment if you dig the character design. Just don’t expect much diecast. 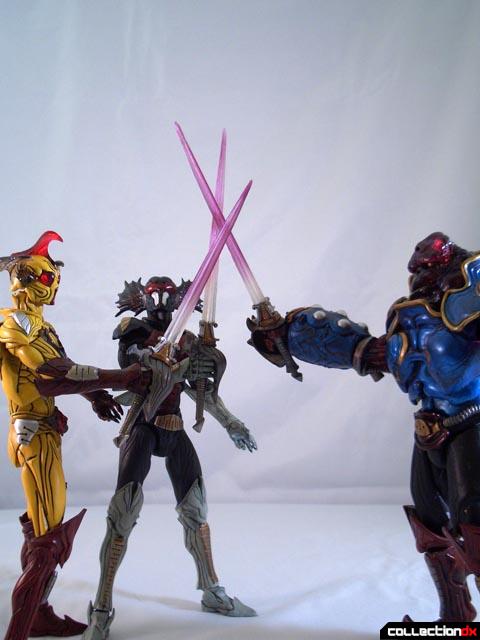 Included is a video review as well.

I never really considered these toys, but they're actually kinda neat-looking. Not normally my thing, but I love the shots of them taking on Gore Sky Deviler! Fun stuff!

Yeah, these are nicer than I would have thought. I never collected this line, but I was always under the impression that there was practically zero articulation, in addition to next to no metal. Also, isn't the line called "Super Imaginative Chogokin", not "Soul of..."?

I've always heard it was Super Imaginative Chogokin. Soul of is usually referring to the "soul" of an old toy line being revised in a new way (Soul of Popynica, Sofubi, Chogokin, etc).

These were taking an old property and going crazy with it, hence the "Imaginative" name. Basically like what Fewture does with Go Nagai stuff and did with Guyver.

I was always interested if they would go into the sentai shows and make some SIC Go-Rangers. They've done Kamen Rider and tons of Kikaida stuff, but they've been dancing around the sentai for some reason.

mmmmm......SIC Gorangers. Now, that would really be nice. They are actually called Star Rangers here in the Philippines (had a huge following in their tv series which ran sometime 1978-1979).