Today I will be reviewing the Hotwheels 1/18 scale Tumbler aka Batmobile. 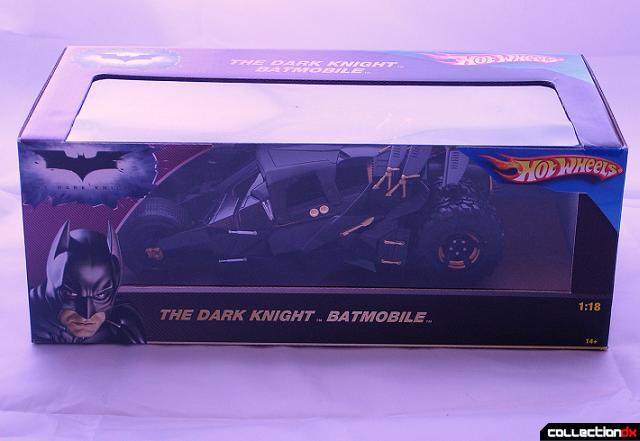 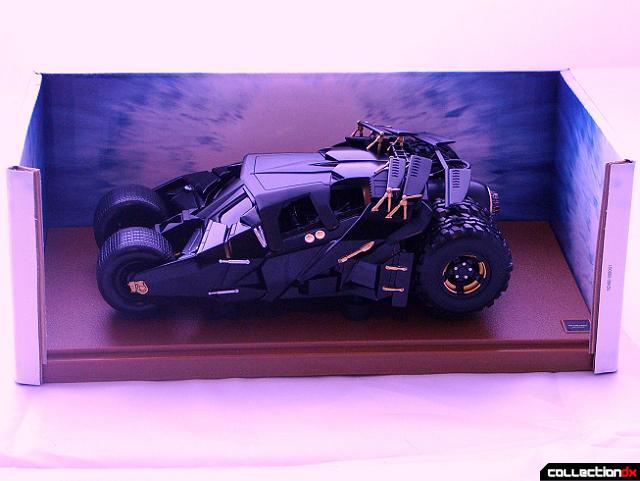 Before I get to the actual toy I would like to give you some background on this interesting vehicle design.

"The Beginning of Batman`s Tumbler"

I searched across the internet to get as much info I could about the Tumbler/Batmobile.
I got alot of the info from Wikipedia and How stuff works, both are great sites to gather info! check them out.

2005 The Batmobile alias the Tumbler hit the big screen in the Christopher Nolan directed film Batman Begins. The style of the new vehicle is more based on the Frank Miller tank like creation seen in Batman: The Dark Knight Returns graphic novel. The film's production designer described the machine as a cross between a Lamborghini and a Tank. In the Nolan films, the vehicle is never referred to as the "Batmobile", only as the "Tumbler". One of the main men responsible for design work on the Tumbler is Nathan Crowley.

In "Batman Begins" Bruce Wayne is introduced to a one-off prototype built for the military to be able to jump spans pulling cables in order to bridge the span. Bruce is impressed by the vehicle so much that he decides to take it and use it in his personal war against Gotham`s worst.

Here is a list of some of the "Tumbler's" capabilities:

Rear flaps for brake
Front auto-cannons
Rocket launcher
Landing hook for landing stabilization
Integrated fire-extinguishing system
Integrated safety connection to gasoline control
Jet engine on the back of the car for quick boosts/ramp-less jumps
Stealth Mode, which turns off the car's lights and reduces the engine sound enormously, making the car very hard to find in dark places
Road spikes can be deployed from the rear of the vehicle. Batman uses this to immobilize a police vehicle following him.
Front of car is heavily armored, so the car can crash into and destroy objects, and also protects the driver while in the "Attack" mode driving position.
Both front wheels can eject when the vehicle is damaged to form the Bat-pod, a bat-cycle like vehicle (the rest self-destructs).

Now let`s get down to how the car was built. Nathan Crowley started creating the Batmobile by model bashing. Model bashing is a technique where you go to a toy store, hobby shop, hardware store and gather parts of every shape and size. You then cut and shape all of those parts to get the desired look for the car. Nathan built six models like this, all 1:12 scale before he got the look and the shapes that he wanted. Once he had the scale model, he started on a full-size replica.

The next part of the process was taking a Styrofoam block and carved it by hand. They carved everything, including things like the rubber tires. The first goal is to get all of the proportions right at full-scale. this car is 9 feet 4 inches wide. That's 8 inches wider than the typical 18-wheeler!

The second goal is to have a full-size model that can be used to make things like the body-panel molds and the frame. The car has 65 separate body panels, and each one had to be manufactured on a custom-made wooden mold. To make the steel frame, the Styrofoam model was cut up to get accurate sizing and panel mounting points for the frame. With all this work done the design team built a test frame.

The team went ahead and manufactured four complete, street-ready race cars. Each of these four cars cost about $250,000 to build. These "race" versions of the Batmobile are the cars that careened through the streets of Chicago during filming. From the outside, they look like Batmobiles. Inside, however, they look like NASCAR race cars.

specs for the "Race version"

So why'd they build four complete Batmobile race cars? There were two reasons. First, the team expected there to be accidents and wanted to have multiple cars in case one or two wrecked. Think about it: These cars have the ability to go 100 mph but have hand levers to help turn corners. They also are called on to jump 30 feet. Accidents seemed likely. The good news is that no accidents actually occurred* The six months of training and the drivers' skill really paid off(*if you ignore the incident in which a driver rear-ended one of the Batmobiles as the four cars were moving to a new location).

Two of the four cars are special. One is the flap version. It has all of the hydraulics and flaps to handle the close-up shots where the car is "flying." The other is the jet version. Nathan didn't want to "add on" the jet flame with a computer -- he wanted a real jet flame. The car has an actual jet engine fueled by six propane tanks located inside the car. The team can mount and dismount the jet as needed for filming.

There is also another car for the scenes where the "Caped Crusader" pulls up and gets out. It has several unique features. It is loaded with hydraulics to make the opening and closing of the cockpit happen in a realistic way. It has a small electric motor that lets the car drive forward, but there is no massive V-8 engine and no need for the car to drive at a high speed. Plus there is a 1:5 scale miniature version which has an electric motor to propel it. this is the version for the rooftop scenes.

The Batmobile is real. Every single time you see the Batmobile in the movie, you are seeing a real, physical object, not a computer-generated graphic. Whether it is driving on city streets at 100 mph, landing in the Batcave or pulling up to the scene of a crime, what you're looking at is a real car. When the Batmobile flies 30 feet through the waterfall to land in the Batcave, what's landing is a real, 5,000-pound vehicle. The Batmobile is so real that it actually served as the pace car for a major NASCAR race held in June 2005.

Well enough about the real "Tumbler". Let`s talk about the 1:18 scale Mattel version. To start off with the model is fairly heavy because on the die-cast metal and plastic content. The plastic seems to be sturdy enough for play, but keep in mind that this is a display model. 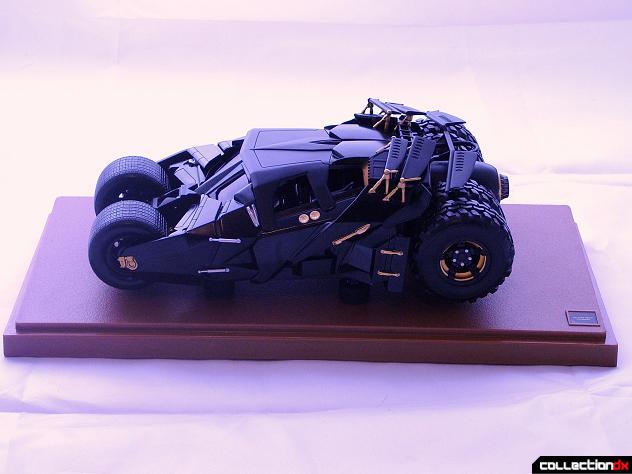 Visually it is a pretty good replica as far as dimensions and such when compared with the real version. Gold and silver paint detail are plentiful (seen below) 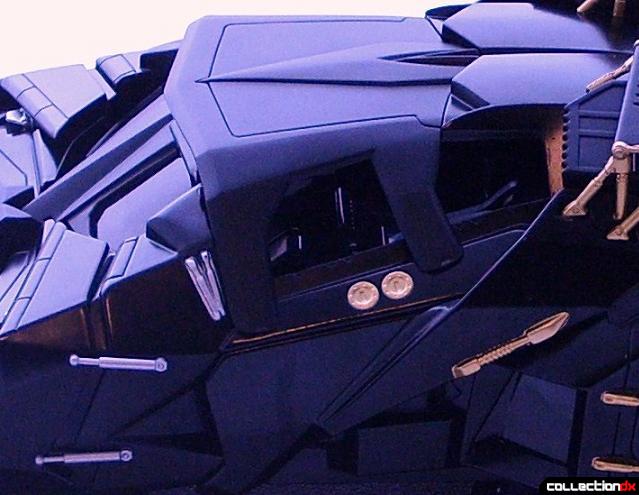 The only real visual flaw is the paint's satin finish. To be more accurate they really should have used flat black. Also, the rear rims have gold and black paint, where on the real car it is silver and black. 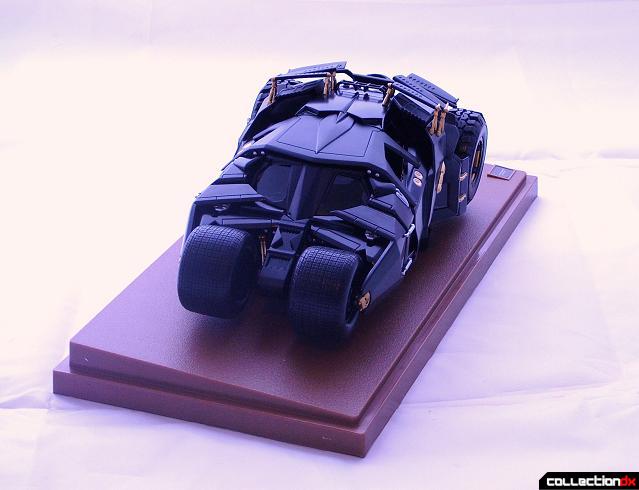 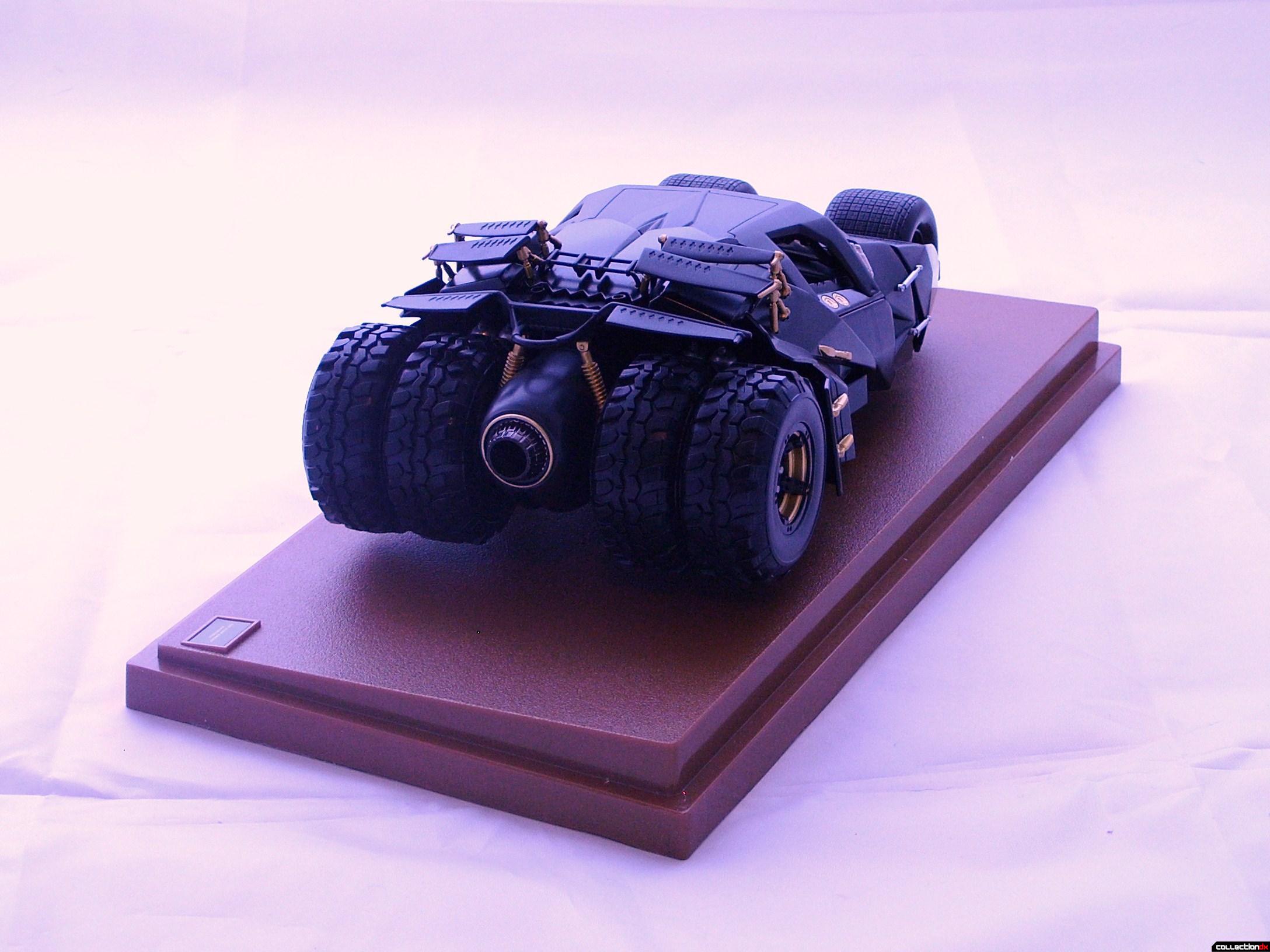 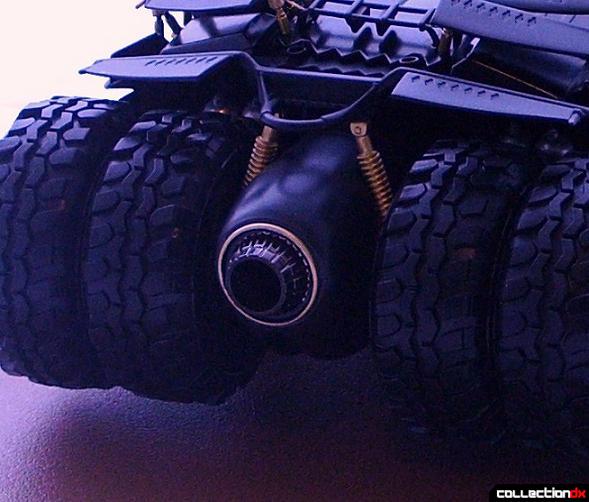 The overall quality was not what I was expecting. The cockpit canopy would not open or close correctly. Every time I attempted to do so it felt as though it would break in my hands. 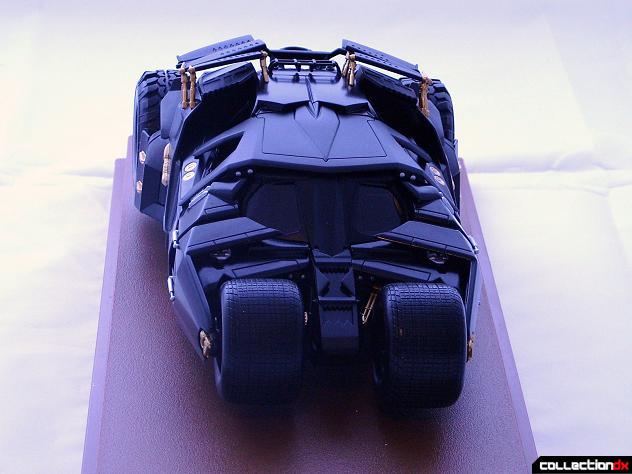 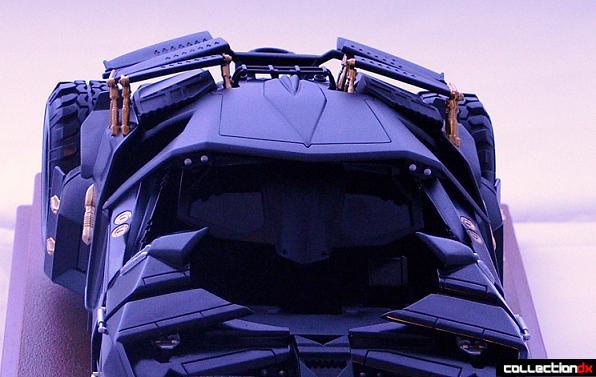 As you can see below, You can remove the Batmobile from its stand. This is accomplished by removing 4 screws with a small phillips screwdriver. I feel it looks the be displayed this way. 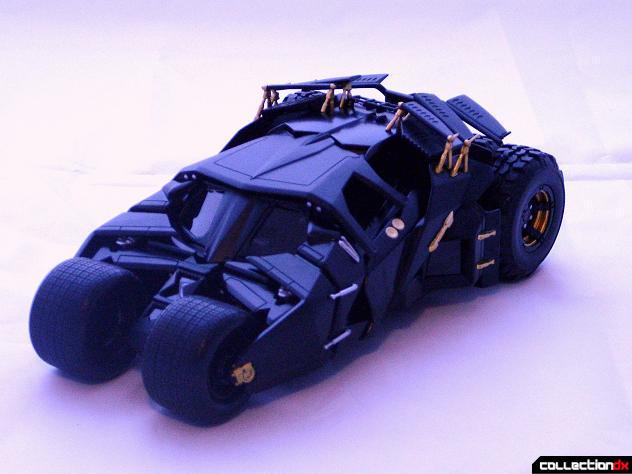 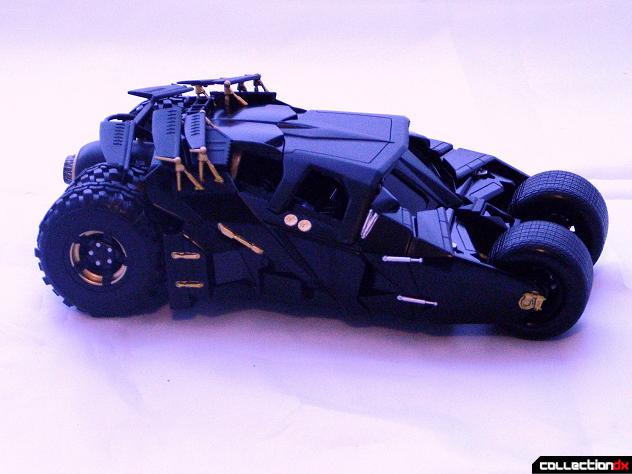 Even with the negative feelings, I have for the paints accuracy and the awkward opening cockpit, I still think this is one "badass" model to display on your shelf. Come on, who wouldn't want the "Batman Tumbler" in their collection? The pictures do not do it justice... It looks great mounted on its stand or not. I am happy to have one in my collection.

10 comments posted
It's funny how everyone was

It's funny how everyone was ragging on this car before BB came out,but it's actually really cool.

Good review,but you messed something up,and the italics never went back to regular letters once the quote was over.

Hey kidnicky, I think that Phat Boy italicized it in those paragraphs because the info provided is from the sites he linked to above. Further down, If you look at when he talks about the toy it is regular type. Great review!

For me, the minute Batman became another "lets make this film realistic" much like the new 007 movies, I kinda lost interest. Tim Burton's Batman films were for me just right. Dark & gritty with fantastic villans, Max Shreck from Batman returns is one of my all time favourite bad guys. Which brings me to the bat mobile, I'm sorry but this new version sucks because they have tried to envision something that the "real" Batman would drive. The result is a tank, not a car, in my opinion nothing beats Tim Burton's version because it was still a car & it had classic muscle car dimensions- long hood/short rear deck. It looked just right & served the purpose without trying to appear to actually work in real life, lets face it the "real" Batman would not be driving around in a custom look-at-me vehicle in the first place.

How's it a "custom look at me vehicle"? IIRC he hardly modified it from the original army specs,aside from painting it black,which actually made it LESS conspicuious.

Dan-
On my screen,once he starts the quote,from that point on,it's in italics,even the part where he's using his own words. Even our comments are in italics. Maybe it's just something on my end,but I don't see what it could be.

If that thing pulled up next you, wouldn't you notice it? It's custom in the sense that he's driving it around town, not on a battlefield, where it would still probably turn heads. The point I was trying to make was that I still prefer a vehicle that looks like a street car, since the whole batmobile idea is ludicrous anyway, there is no need to try and make a vehicle that might actually really work. It's still to far fetched no matter what the design. This car looks like pieces of shattered glass glued together, with tractor tyres thrown in somewhere, it's a mess. It does not compare to the corvette-esque design of the first films car design.

OMG, do we HAVE to pull up the whole "Batmobile would never work in a crowded city" argument here...?

You need to see it anyway,it ruled.

I don't know if this is really the place for this,but at my local Kmart they happened to have a table ut with some Hot Wheels cars on it,and it turns out there's a Hot Wheels of the 60's Batmobile!!! So I reccomend taking a look at the Hot Wheels cars next time you're at the store. It may not be the most detailed "collectible" out there,but for $1.00,it's hard to complain.