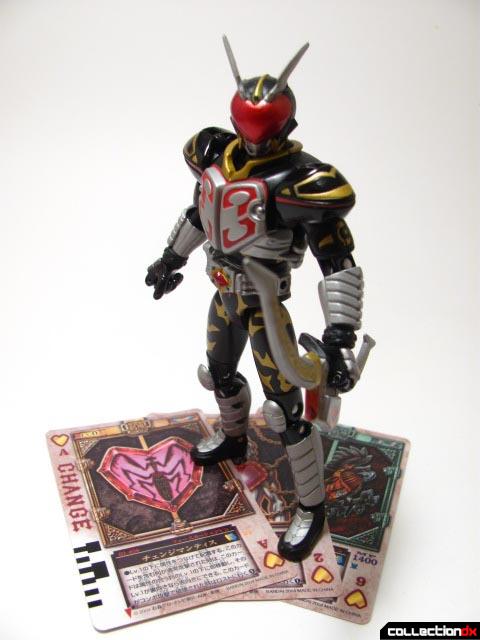 Hajime Aikawa: a man of no positive disposition. A serious and blunt man, he wanders the forest trying to learn about himself and what it means to be human. With this struggle, another makes itself known, a struggle that has been subdued for a thousand years: the Undead. To combat this threat, Hajime uses the power of the Mantis Undead -- the Ace of Hearts -- to transform into Kamen Rider Chalice, the suit of Hearts in corporeal form. A wild and unpredictable Rider, he sets out to seal the Undead and to find himself.

With this, Bandai gives us Souchaku Henshin Masked Rider Chalice. The Souchaku Henshin line of toys lies upon the premise of "henshining" or transforming. This is done by making the armor of the Rider removable and attachable upon the human underneath, in this case, Hajime. The result is admirable, as the idea is fantastic; however, the final result is hit-and-miss. But let's come back to why.

Chalice comes packaged in a box with a see-through front showing off the gimmick of "Armor Transformation:" Half Hajime, half Chalice. Very interesting, especially the gradient faded mask. 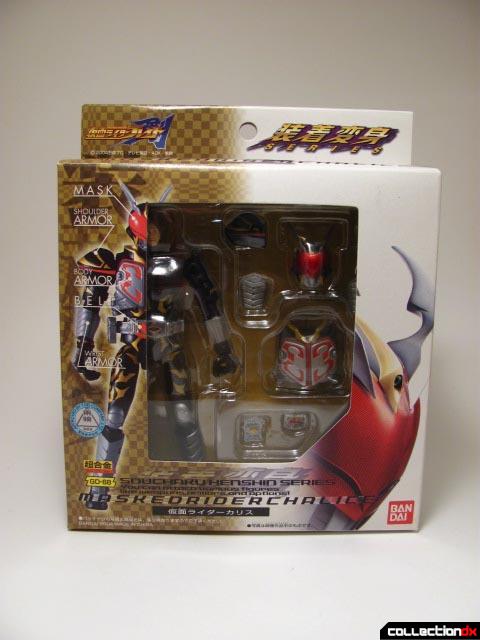 The sides show different poses that IRL (in real life) Chalice can do and the figure reproducing said poses. 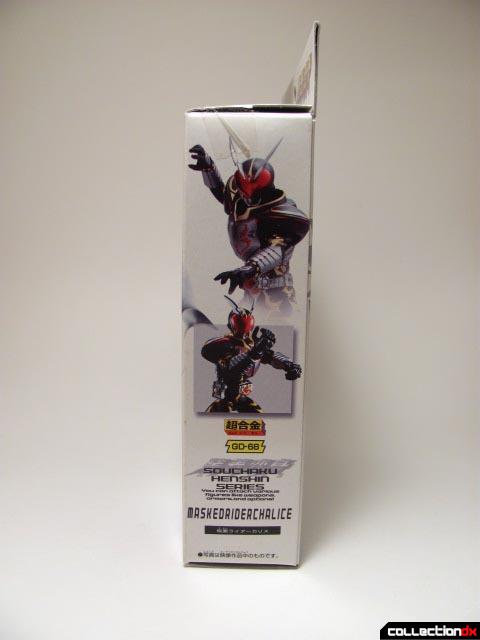 Turning to the back, we see the figure's different attributes and accessories represented with pop-out text such as "Tornado" and "Change," two of Chalice's trademark phrases. 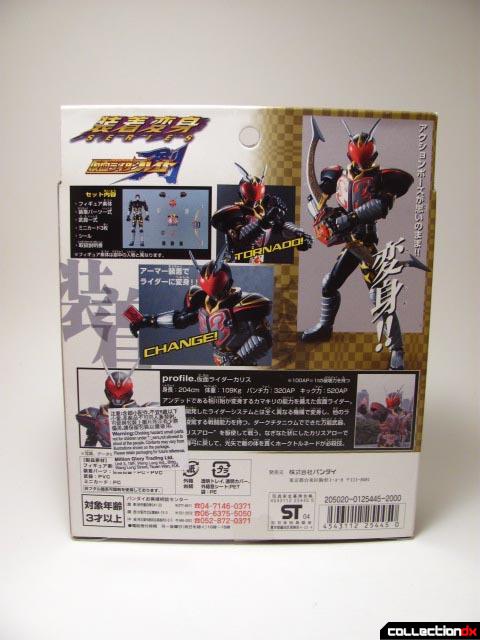 The packaging is placid, yet tasteful, and reveals much about the toy held within. But enough of the packaging! We're here for the toy!

Being of the Blade persuasion, Chalice is very rich in detail, both subtle and overt, in his heavily armored design. From the bolt heads on his chest to the etches in his Chalice Arrow, not a single detail is overlooked. 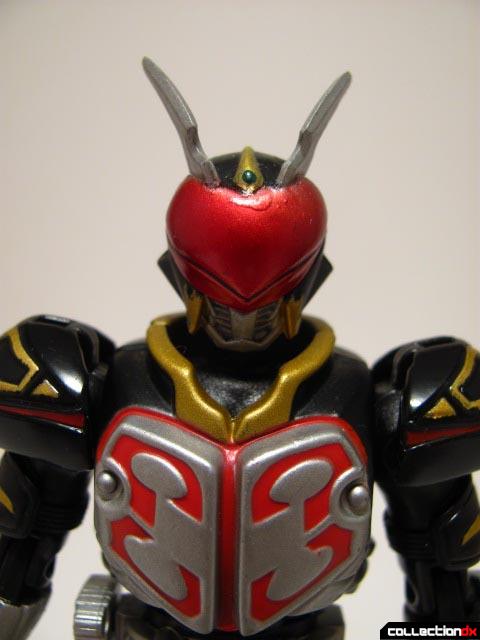 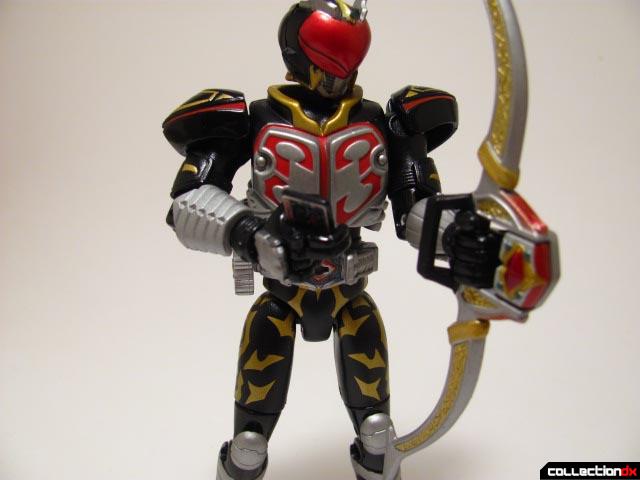 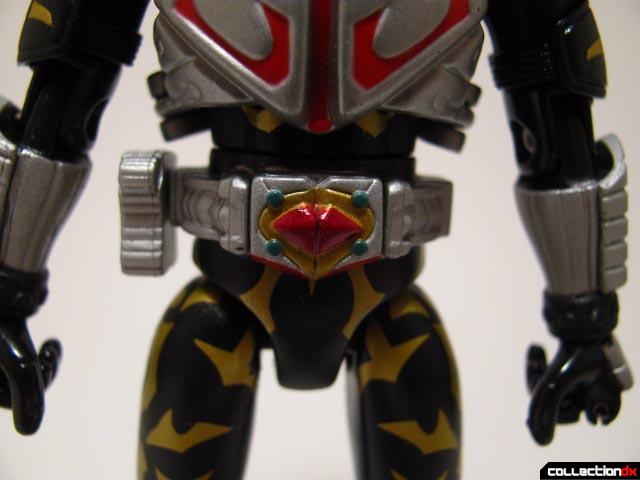 The colors are deep and go well with the black of his underlays. The gold tribal thing Chalice has going on is faithfully represented in a dirty gold that is such a welcomed contrast to the black. This design choice is actually what made me like Chalice initially in the show. 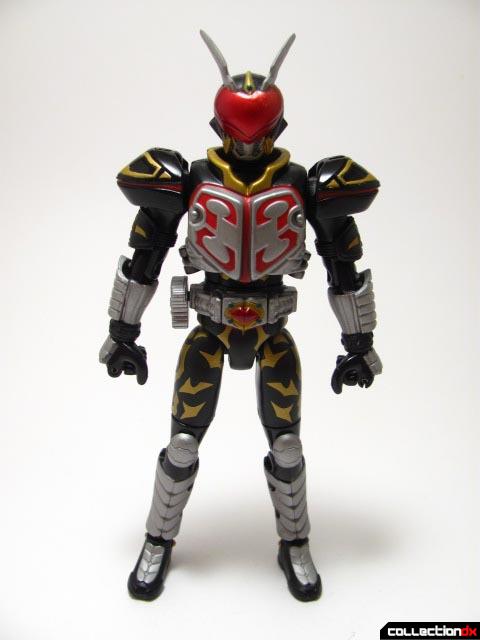 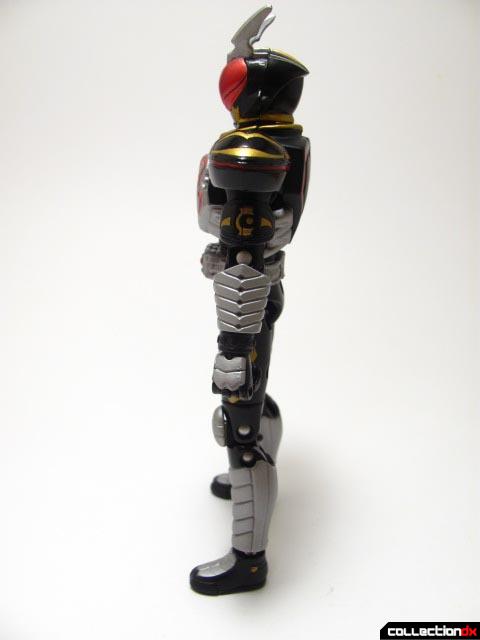 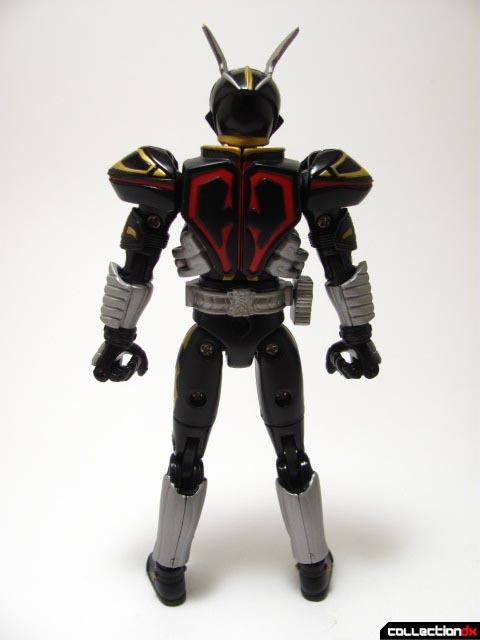 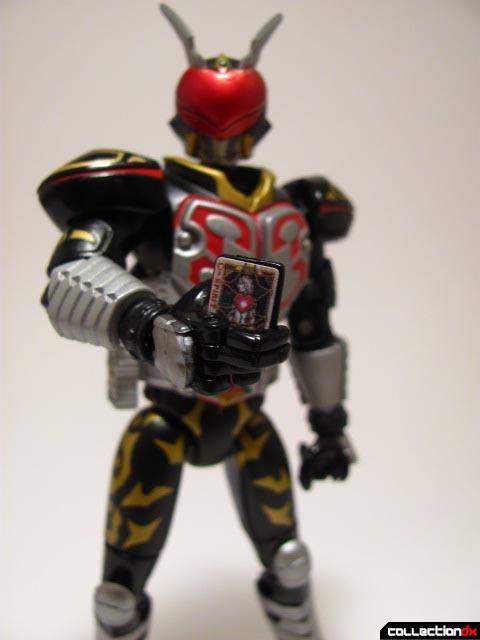 The joints aren't obvious, but they aren't inconspicuous either. They are most noticeable when the armor is unequipped. Speaking of unequipped, the body of Hajime is also quite detailed. His sculpt includes abs and pecks, and his face, though way too small, is an okay depiction of Hajime... if you squint and know who you're looking at, that is. 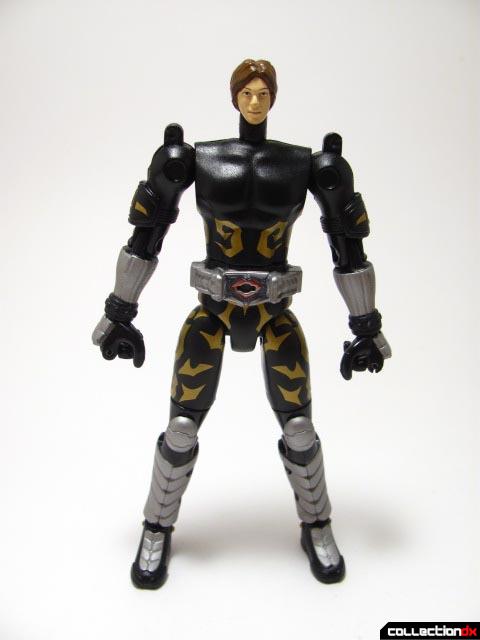 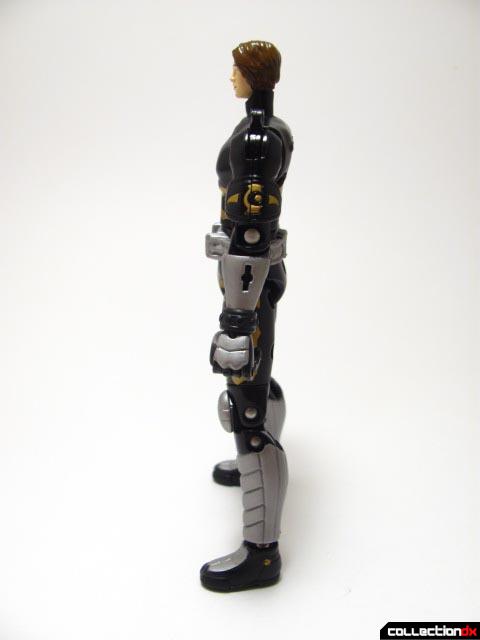 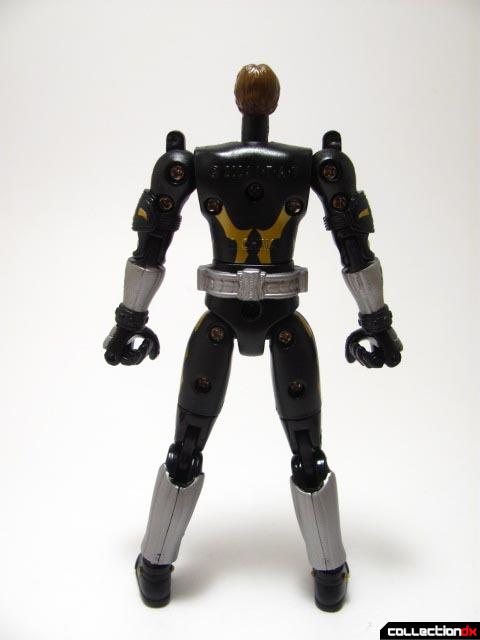 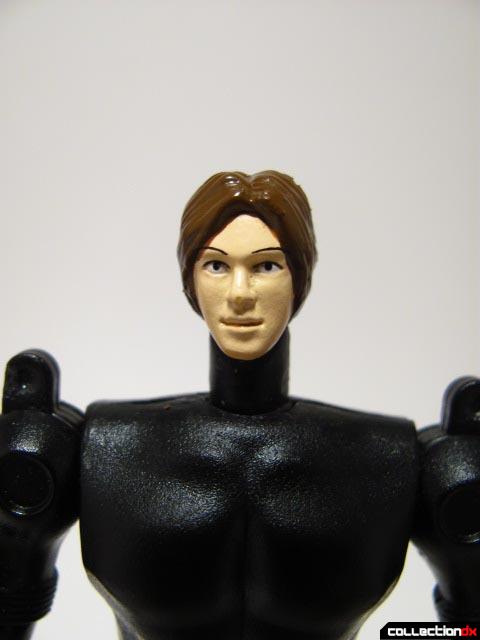 That, in fact, is the biggest flaw with the toy as mentioned before. Being made to be armored up, the toy suffers from scale issues in the Hajime form: the head is too small for the body, and he is much too skinny. I'm okay with this because, once armored up, the Rider is in perfect proportions. Hajime isn't gonna win any awards for best looking toy, but the armor is what counts here, and it wins in my book. Besides, who's going to pose him as Hajime, anyway?

Another thing to point out is that Chalice is covered with exposed screw heads. I'm personally not bothered by this, especially since his armor covers up most of them and they are all either on the back or inner extremities. 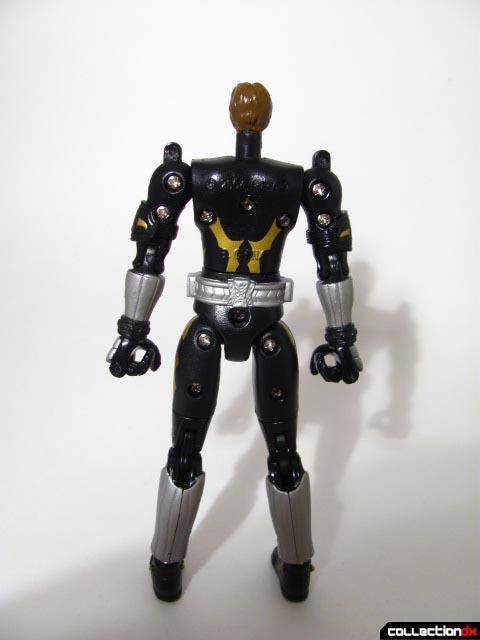 Chalice comes with quite a few accessories and extras, though most of them are his armor: 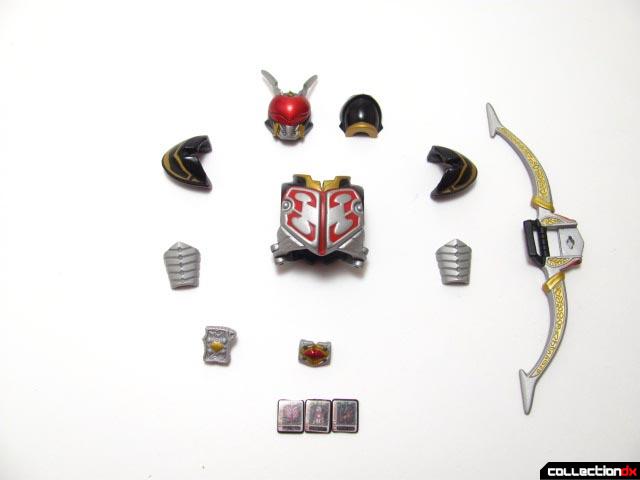 The cards included are Tornado, Change, and Spirit. You'll have to attach the stickers yourself. :( 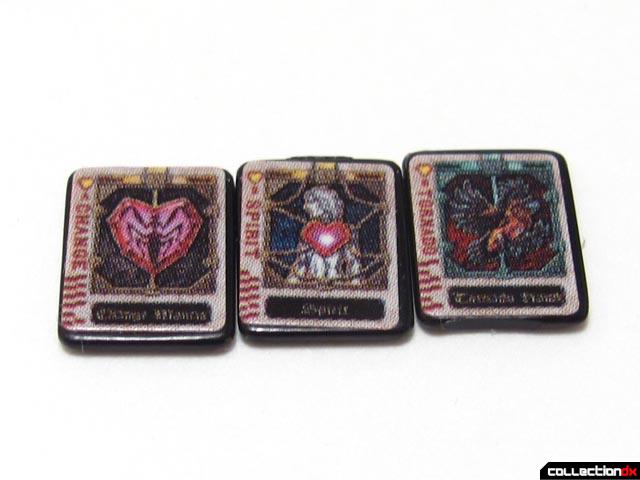 The articulation on Chalice is pretty good. If you're expecting SHFiguarts, then prepare to be somewhat disappointed. He can move and pose acceptably well and do most everything you want, just not to the degree that a SHFiguarts can. Remember, however, Souchaku Henshin toys are just that: toys. They are not the collector grade figures, so they leave out a few things to keep the price point down. 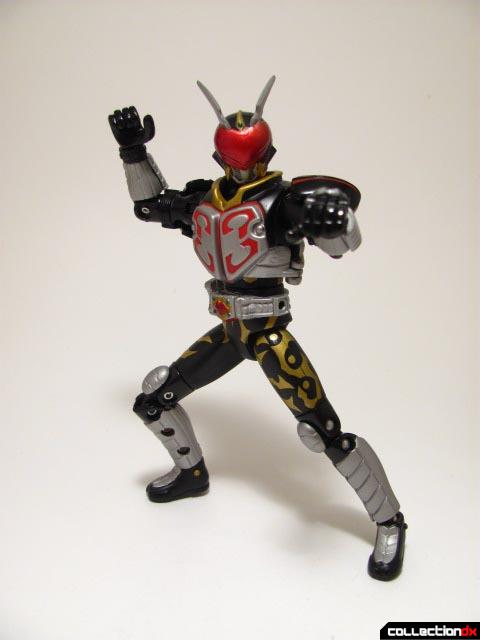 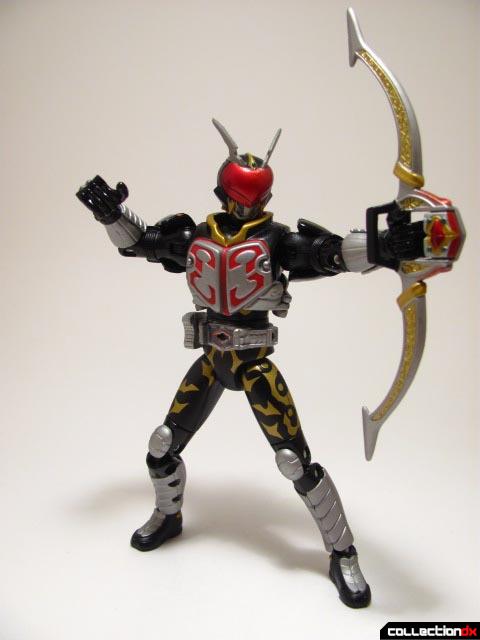 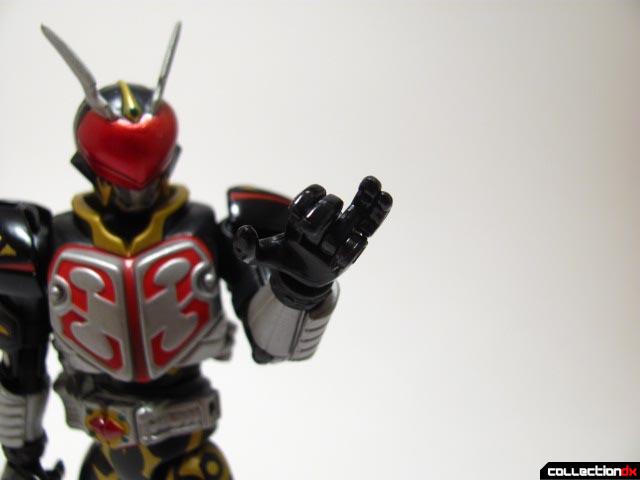 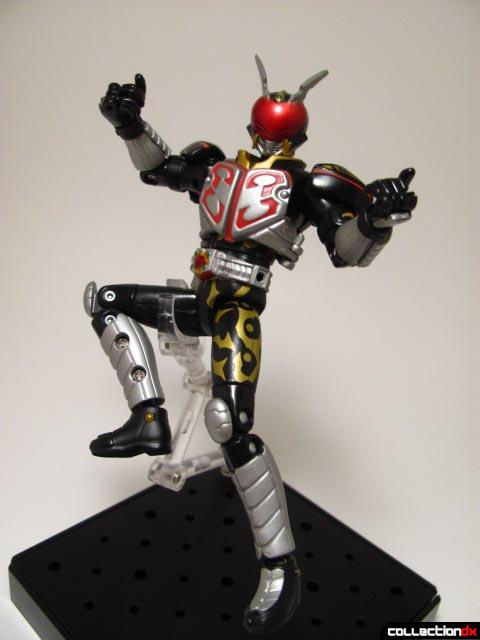 Construction-wise, Chalice is very dense. For his size, he is very heavy, especially since his chest armor is pure die-cast. The rest of his body is a hard dense plastic which also leads to his heft. His Chalice Arrow is made of a softer plastic and bends slightly when provoked. Otherwise, it keeps shape very well. The joints are tight and keep well. 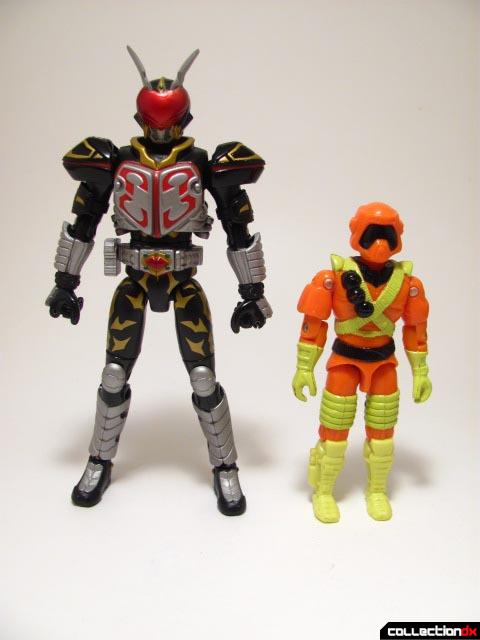 The gimmick of Souchaku Henshin toys is the armor up ability. This is achieved by slots, splits, and hinges. The driver and arm bands are attached via slots, and the card holder by a snug peg. The helmet is split in two and pressed together around Hajime's head. The shoulders connect via peg hinge. The chest opens up like a pair of French doors and wraps around Hajime closing to a seamless close on the back. 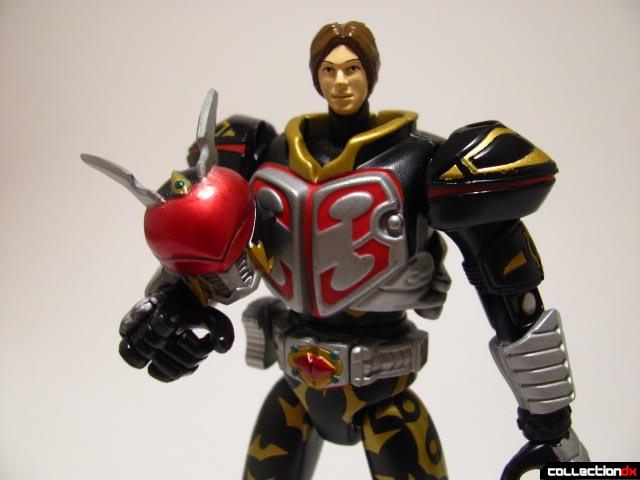 Overall, Souchaku Henshin Masker Rider Chalice is a very solid toy with an interesting gimmick and few flaws. The construction is solid and dense; the articulation, while not superb, will get the job done well; the accessory count is good with very character specific items; and the gimmick is fun and interesting. Though he is out of scale with a tiny head and covered with screw heads, this does not detract heavily from the toy, as I, for one, enjoy this toy very much.

Ah, do they still continue with the SHS series, or they replace it with SH Figurarts?

Yes, SH Figuarts did take over for the Souchaku Henshin line, and I believe right after Kiva is when the switch happened.

I may be wrong, as I haven't confirmed this, but I think the Souchaku Henshin was taken over not by the SHF, but by the "Change" line. This Change line is different for each Kamen Rider and mimics the main gimmick of the main Rider, for example, for W it was named WFC and allowed the toy to be split in the half, so each half could combine with different halves, forming the different combos used in the show.

You were indeed wrong. The SHS line was the collectors' line back in the days. The Change line still continues as "kids' toys". Today, the SHF line replaced SHS, starting from Kiva.

All toys are instantly ten times better when posed with the Ice Cream Soldier!

You better believe it!
Ice Cream soldier has always been my favourite GI Joe (save maybe for Zanzibar).