“When Aioros was 14 years old, he, along with fellow gold saint Gemini Saga, were summoned to Pope Shion's throne room for an audience. There, the Grand Pope revealed that their goddess had once again reincarnated in the form of an infant, and so the Sanctuary must prepare itself for the imminent wars. As Shion himself was getting on in years, he decided that it was time to appoint one of the twelve Gold Saints as the successor to his seat. At the time, most of the Gold Saints were still too young; only Gemini Saga and Sagittarius Aioros were most qualified. The Pope eventually selected Aioros as the new Pope, and asked Saga to serve as an assistant to the Sagittarius Saint.” 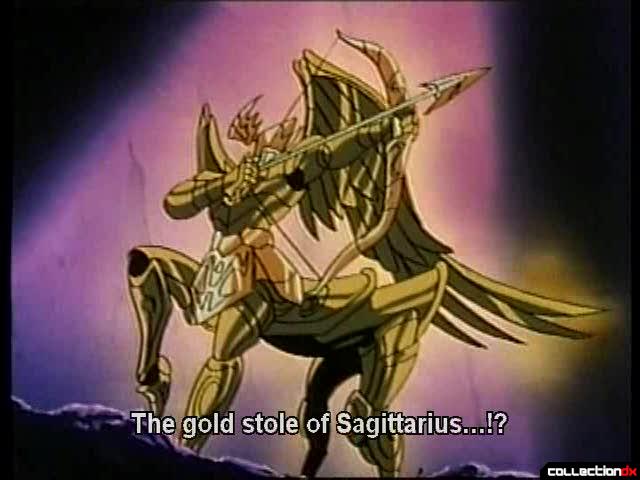 “Saga, possessed by his evil side, became jealous at the fact that he was not chosen for the seat, especially since he believed that he was superior to Aioros in terms of power and wisdom. Saga confronted Shion regarding his decision and killed him. He disguised himself with the Grand Pope's garments, and left to kill the infant Athena. Inches before Saga could dig the golden dagger into the baby's belly, Aioros appeared and halted the blade from striking the death blow. The Sagittarius berated the man he assumed to be the Pope, but was quickly shoved aside. After a minute of struggle, Aioros sent Saga flying into the nearest wall, knocking off his headdress and mask. Upon seeing Saga's face and realizing that Saga had killed the Grand Pope, Aioros immediately snatched away the infant Athena and ran off from Sanctuary.” 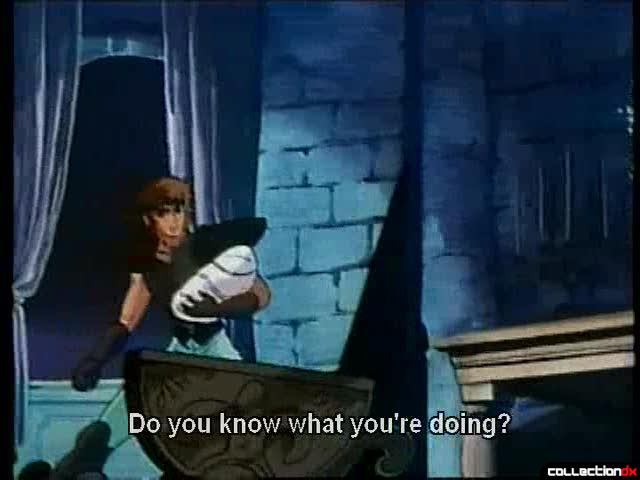 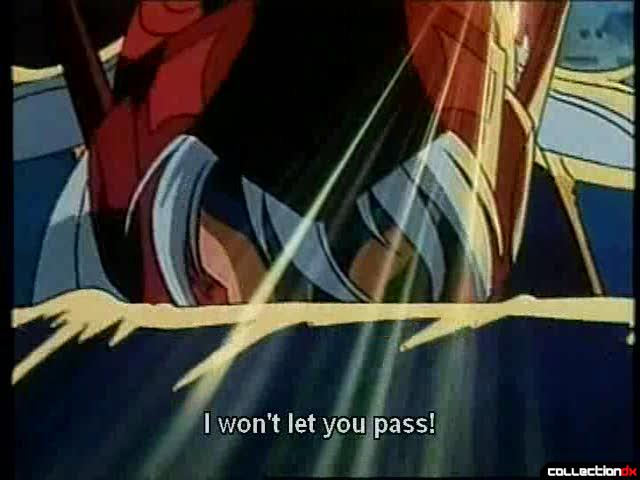 “Saga, disguised as the Pope once more, sounded the alarm and sent guards to go after the saint. It is at this point that he officially branded Aioros as a "traitor". He was eventually found by Capricorn Shura and managed to flee, but was deadly injured.” 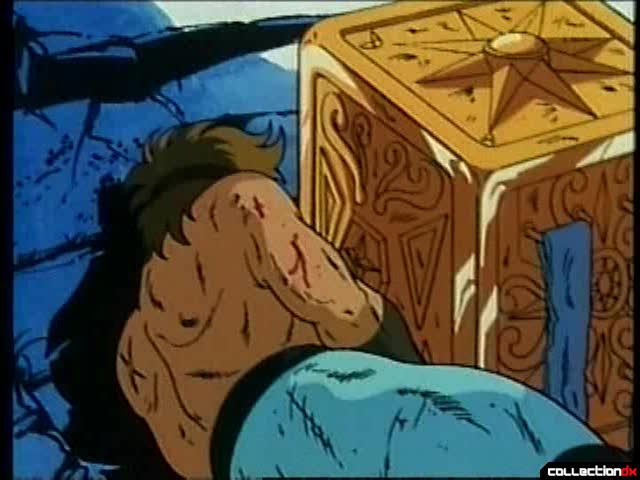 “As he was dying, he ran into Mitsumasa Kido, who was touring Greece at the time. Aioros begged the elder Kido to become Athena's new guardian, and explained to him the travesty that had taken place at the Sanctuary. Along with other secrets, Kido learned about the existence of Athena's Saints and their Cloths. Entrusting the elder Kido with Athena and his own Sagittarius Gold Cloth, Aioros succumbed to his injuries. It is unknown as to where exactly Aioros died and buried, as the whereabouts of the location is omitted in the series.” 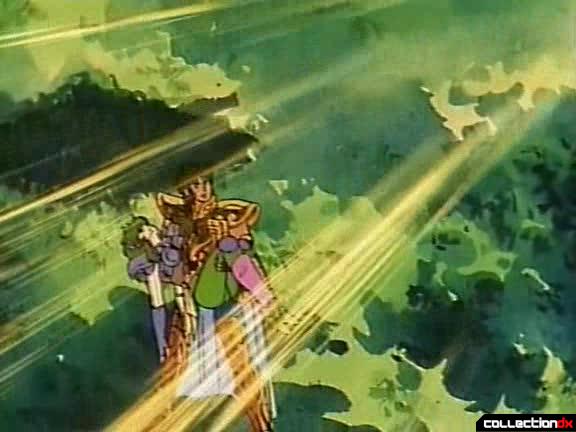 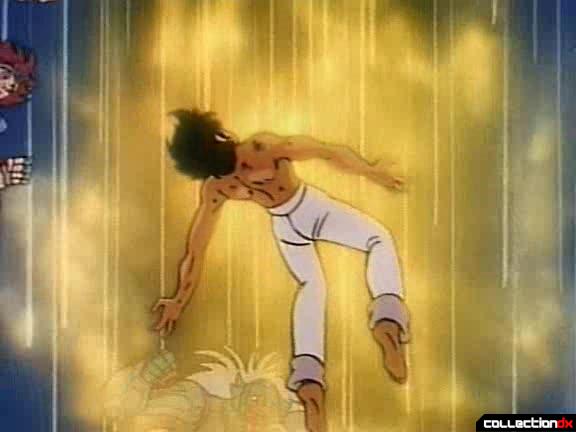 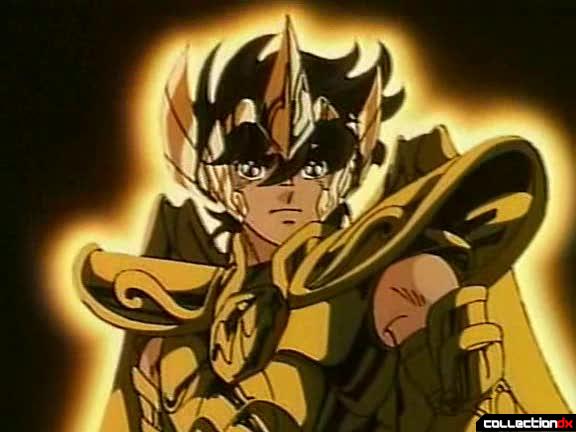 “After his death, Aioros' spirit would provide assistance for Athena and her Saints. He has aided Seiya in battles by lending the young bronze saint the Sagittarius Gold Cloth time and time again, and even appeared once to his brother Aiolia during Aiolia's fight with Seiya, when he demanded proof of Saori's identity as the goddess Athena. When the bronze saints were in the Temple of Sagittarius, the Sagittarius Cloth moved on its own (or with Aioros' spirit), and fired its golden arrow into a nearby wall -- revealing a final hidden message of the gold saint's last will: "To you young boys who have reached this temple, know that I entrust Athena's life in your hands. Aioros." It is likely that Aioros foresaw that one day, new Saints would go to his temple to fight for Athena.” 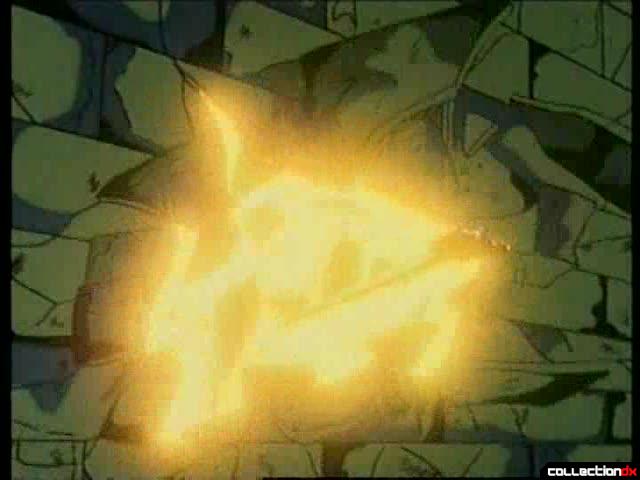 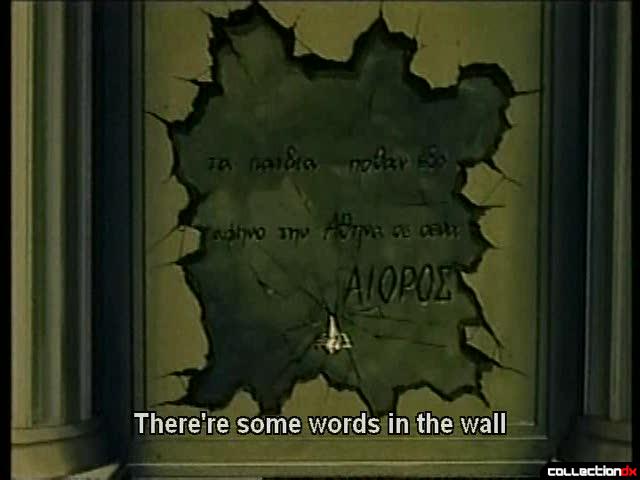 “When Athena's saints were once again fighting against Hades's spectres, all the Gold Saints, both dead and alive, gathered in Hades' room to break the Wailing Wall. Only with sunlight can the wall be destroyed, and because each individual gold cloth contained a bit of solar energy, gathering all twelve would provide enough of it to properly damage the wall. At this point, the spirit of Aioros appeared with the rest of the recently deceased Gold Saints to aid their comrades in accomplishing this task. Focusing on a single point of the Wailing Wall, Aioros guided all twelve gold saints' individual attacks into one, and struck the wall. Once the mission was completed, Aioros and the rest of the gold saints dissipated, leaving only the gold cloth behind.” 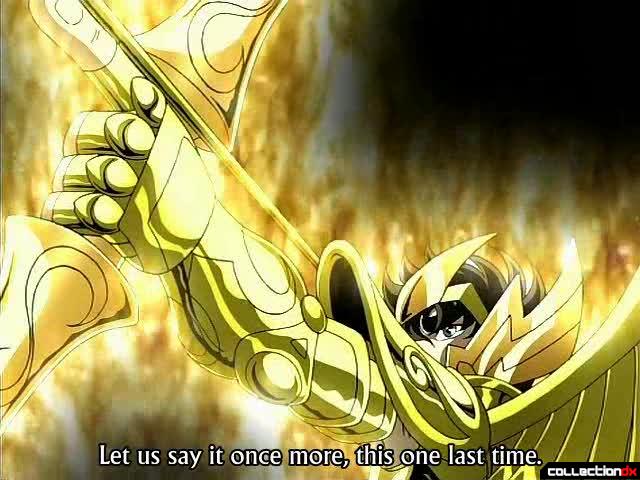 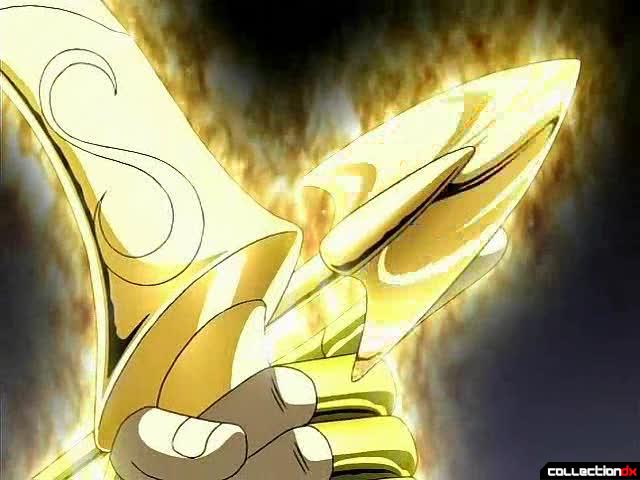 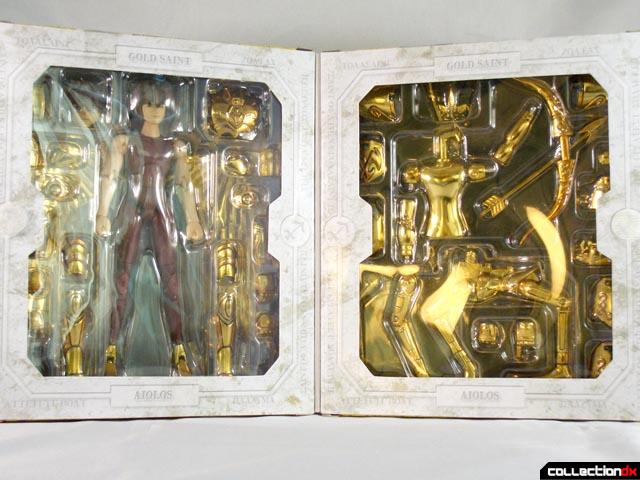 Sagittarius Aiolos comes packaged in the usual Book style box with Windows to see the parts and pieces. No surprises here at this point, but always a nice presentation. 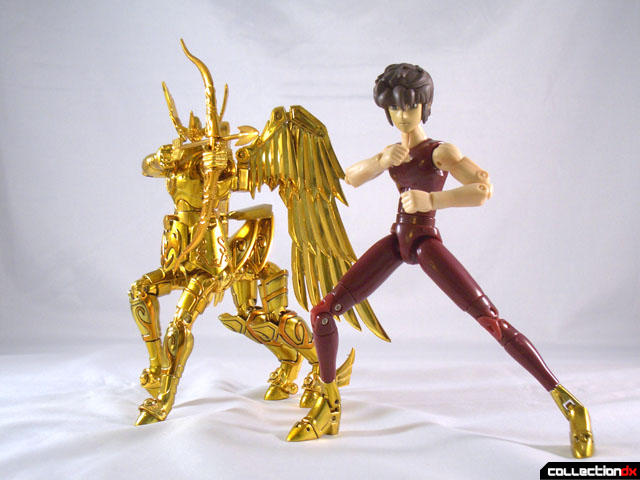 Figure is a Generation One body as it was an early release so articulation is limited in the waist area which is fine as the armor design limits movement in the waist. Not a big deal but worth noting. Body and head are plastic with the feet being die cast metal. 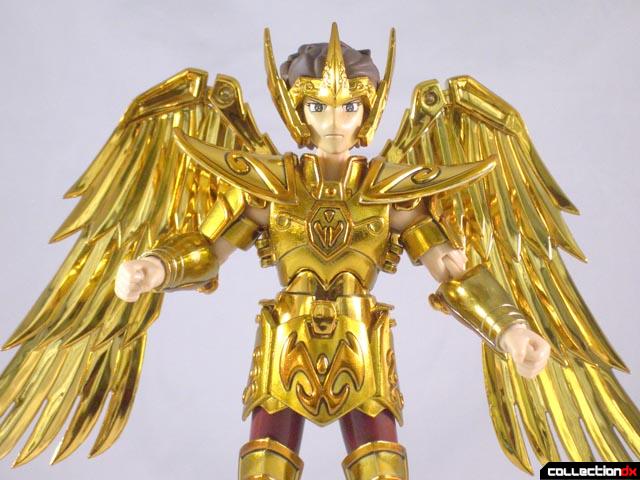 It falls a little short in sculpt department as far as the faces go. Aiolos just doesn't look right. He has a vacant and lifeless stare as well as the head looking a bit too small for the body. This character is perfect for an Appendix release to correct the head sculpt. 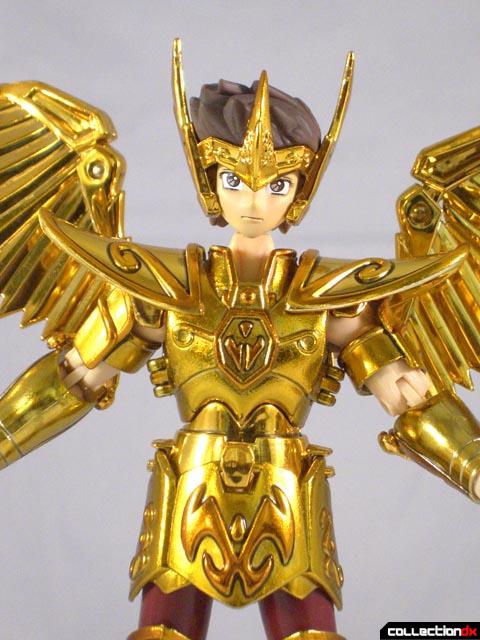 While nice that Bandai included a Seiya head so he can wear the Cloth like in the show, it is down-right ugly however and suffers from the same vacant, lifeless look as Aiolos. 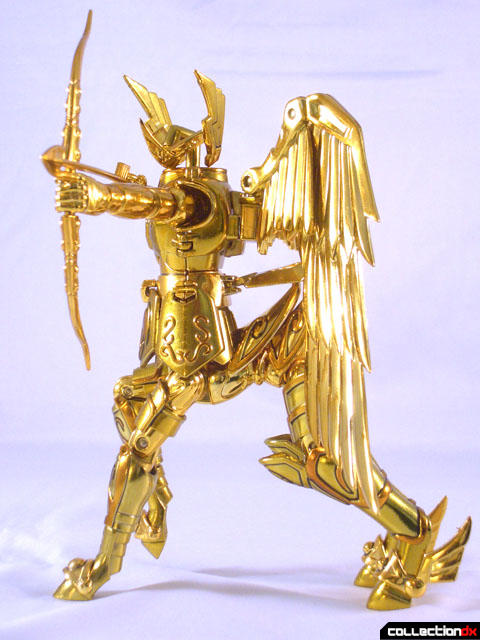 Luckily the Cloth of Sagittarius itself is as beautiful as previous Gold Cloth's and looks just fine in its statue form. This will be my preferred form for display as I think of the Cloth and not Aiolos when I think of it in the series. 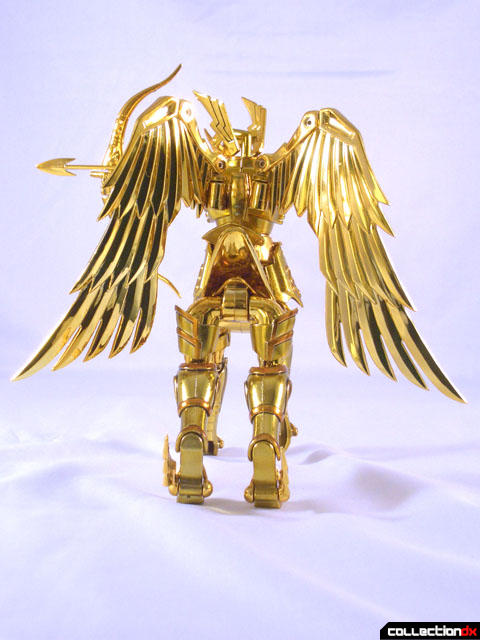 The Cloth features large amounts of die cast metal with the wings, bow and arrow and the headpiece being plastic. The rest is metal. 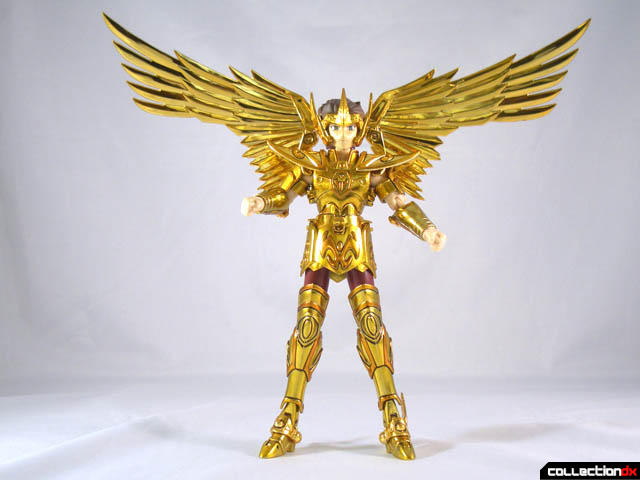 Like I mentioned earlier this is a very important piece in a Saint Cloth Myth collection and one any self-respecting Saint Seiya fan should have not only for the reasons mentioned in the Wikipedia recap but for what it becomes.... but more on that in the next review. 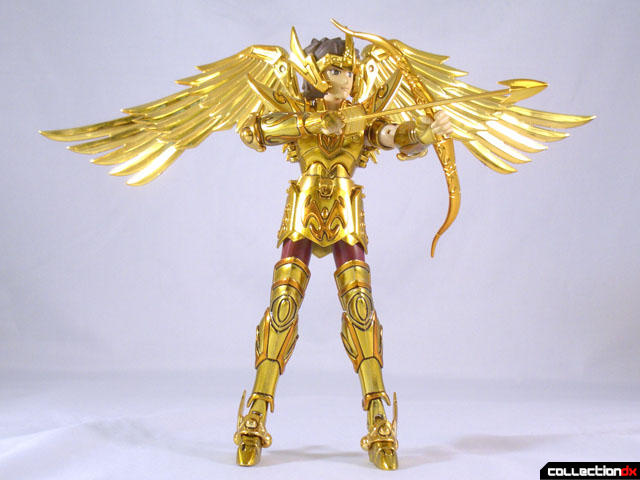 I think the design is fantastic and looks great in its statue form but not the best “figure.” I think it's a fan only choice this time around but your mileage may vary.

Great review Atom. Going to have to put this on my short list to consider getting.