HAPPY NEW YEAR! Sorry it's been a while but I figured I'd try to finish something big by the end of '04. It was one of those years for everyone and especially on a more personal level for yours truly. Before I started my Gold Frame project, I was working on the second largest piece for my shop. It's a little something I've been kicking around since the end of September, and in some cases it's been kicking me around. From the Gundam SEED 1/144 High Grade collection is the Mobile Suit Embedded Tactical EnfORcer!

History:
As Gundam SEED came to its final episodes, fans were introduced to another piece of mobile artillery. It was specifically designed to be docked with either the ZGMF-X10 Freedom Gundam or the ZGMF-X09 Justice Gundam and was to further enhance their unique and impressive arsenal. It was called the METEOR. While its name has more meaning than its T.M. Revolution sung counterpart, it merely complimented the weapons of the Freedom and Justice with its array of missile tubes and beam cannons. Using them both at once, the Freedom and Justice were able to defend the PLANT colonies from a drastic volley of nuclear warheads launched by the Earth Forces. 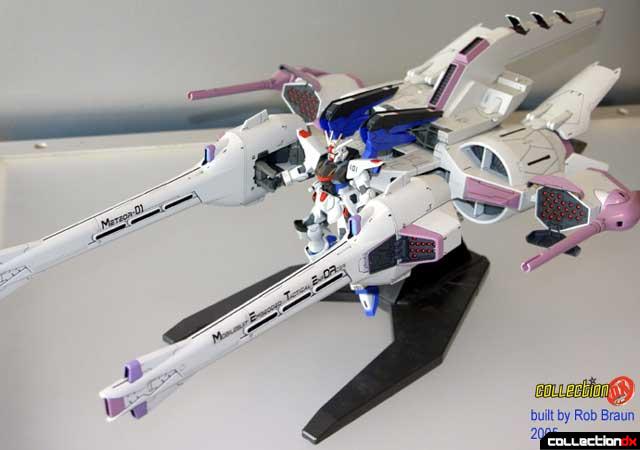 Building:
The Meteor model kit comes in roughly two parts: the mobile artillery system (METEOR unit) and the Freedom Gundam. According to the release notes, the Freedom was modified from the original 1/144 scale version. As far as I can tell (from using Hobby Search, http://www.1999.co.jp/eng/) the only difference is the color of the plastic, changed from a solid white to a grayish, off white color. Building the 1/144 Freedom was a simple enough task thanks to multi-color system injection. Painting on the other hand became the top priority. Just about every piece on the Freedom spanning from head crest to the bottom of the feet needed to be painted, especially all the 'Red Points.' 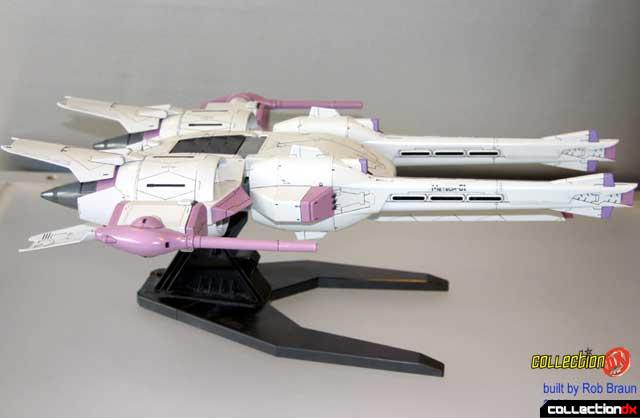 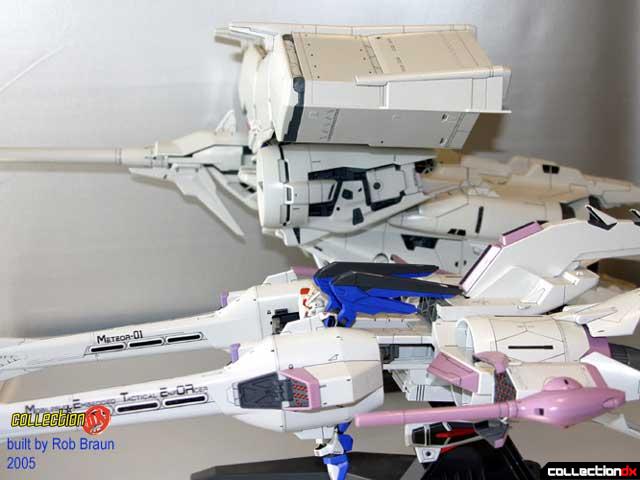 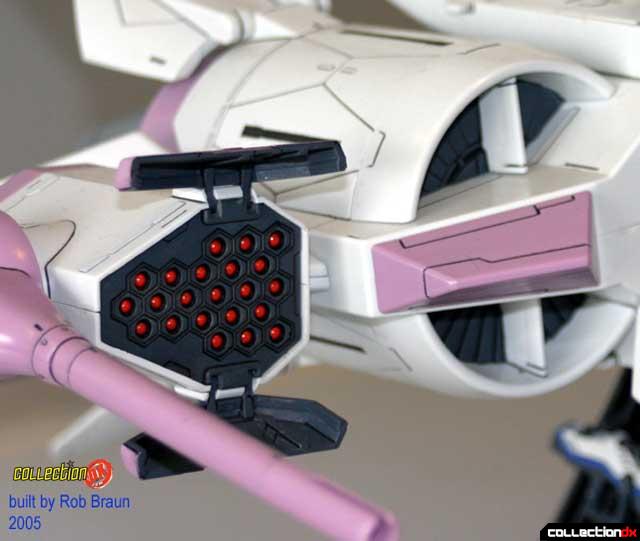 While most of the model was done in its final colors, the gray pieces needed some serious work. This includes the parts for joints and the hands which were molded in a teal colored gray which I then painted with Engine gray. As for its accessories, the Freedom needs its cannons painted and the beam rifle comes molded in the 'gunship' white/gray plastic as the hip mounted laser cannons and needs to be done in its proper colors. On the overall, construction of the Freedom is tight, and while miniscule in size, the mobile suit captures the details like it should. 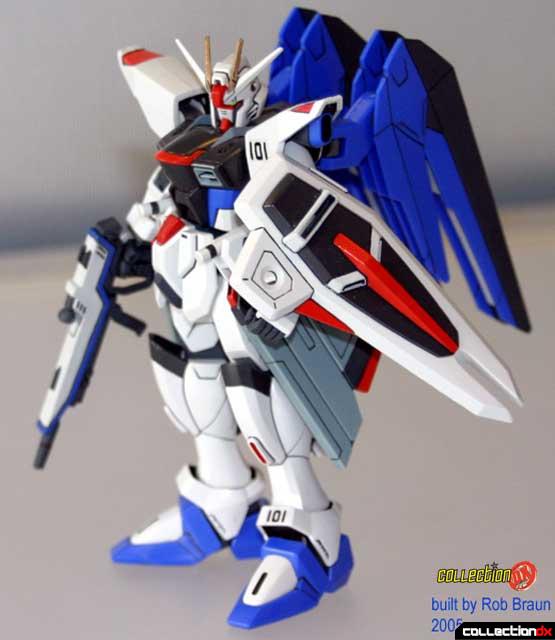 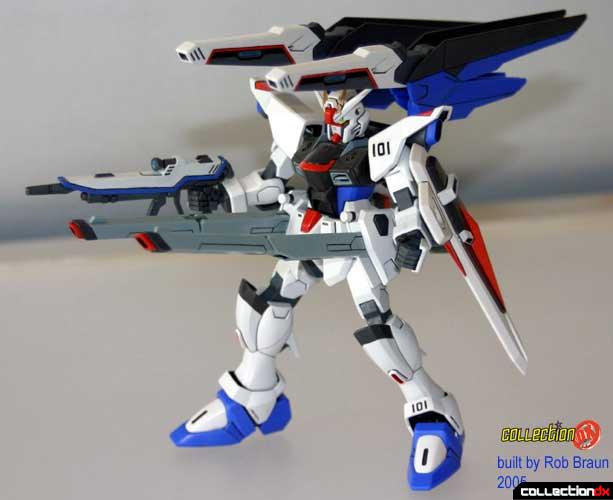 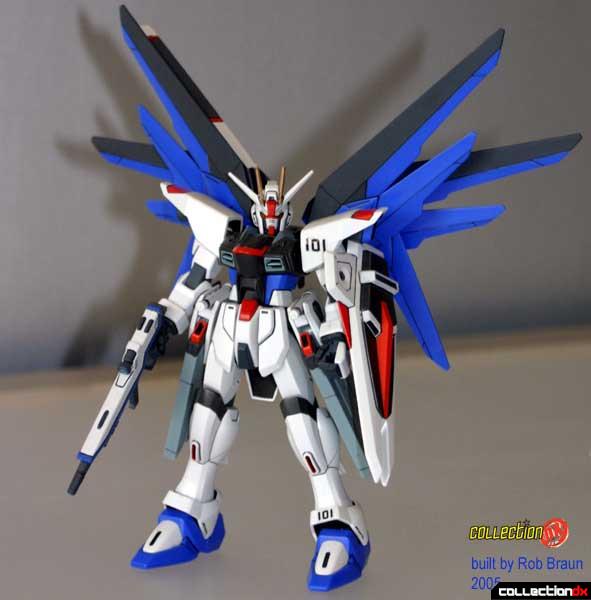 Now for the main event: As you probably know from SEED (and more recently seen in SEED's sequel series GUNDAM SEED DESTINY) most of the specialty weapons have more to their names, like how GUNDAM translates into:

When I first saw the Meteor, I thought of it as SEED's equivalent of the Dendrobium, the massive mobile armor from Gundam 0083 and the largest High Grade model Bandai's ever made.

For the record, I want to say there is a good difference between something as the Meteor and a Mobile Armor. The Meteor merely compliments the existing mobile suit with an array of weapons while the Mobile Armor has its own artillery system and can act as a stand alone weapon. This is just something I've figured from reading Mark Simmons' notes about Gundam mechanics on the web.

When I began building the Meteor, I almost hoped it would be like the Dendrobium. Sad to say the construction of the Meteor was on par with the rest of the SEED HG collection in 1/144 scale. This requires a lot of painting to make up for the lack of 'Grade' detail. Out of the box, I'd say that you'd be building a solid chunk of gray plastic with purple trim if you didn't have any paints.

This is just an observation that I know everyone has, but what was Ohkawara smoking when he designed the SEED series: I mean: purple:!? I ran out of Red Vs Blue 'Donut' jokes with the Aegis but seriously dude! If I were fighting and losing to something that was purple like this, I'd self destruct myself!

There are five points with missile tubes that seriously need painting (77 individual red tipped missiles, nuff said). And the turbines and vents in the main body need a good coat of paint. On the upside, most of the parts have some new kind of surface detail (micro thin scaling patterns) that helps to establish the grandness of this piece. For those of you that might airbrush your kits, these could be points that will show up if done right.

Gimmick wise the Meteor retains its transformation ability to go from its fully opened (Mobile Suit docked) attack mode to the closed down transport mode. While not as impressive or mind boggling, it does take down some of the size for displaying. It also features movable laser cannons and the missile pods open and close. The main arms are built on ball socket polycaps and track arms which can flex to meet the hands of the docked MS. Other than that, it's a pretty stiff shelf piece. For those worrying about its girth, the Meteor measures out to 13 inches wide and 24 inches long when docked with a mobile suit (Freedom, Justice or any other 1/144 SEED HG). Add on its accessory saber beams (15 inches long) and you've got a lengthy piece of ABS on your hands. The sabers are done to fit snug but one problem I've noticed is that they weigh down the arms, so dynamic posing is difficult at best. While it is impressive in its 1/144 scale, the Meteor is still dwarfed in comparison to its Mobile Armor predecessor. Even though its size is impressive, there isn't much weight to it. Because the Dendrobium used steel plates in its main body as a support structure, it weighed nearly 3 to 5 pounds. As for the Meteor with its solid plastic and polycap construction, it's lighter than a fully armed 1/60 scale Perfect Grade. I mean seriously, I've used more rolls of duct tape that are heavier than this thing! Another downer is how the mobile suit docks, unlike the GP-03 and its resting position inside the Dendrobium, the corresponding MS for the Meteor just hangs by two tab pieces. No peg, no bracket, just hanging by its armpits. Another little quip is the grips for the arm units, just two pegs that grip onto the top and bottom of the standard MS kit's fists and even they fall loose sometimes.

On the overall, I really think the Meteor is something Bandai needed more time on. It was something I wanted to build ever since they announced it, but after building most of it, I started to get bored and working on it felt more like a chore than a build. So for anybody looking to build the Meteor in any way shape or form you've got two choices: the 1/144 scale kit shown here or with the Gundam Collections 1/400 scale (paper weight sized) version. Either way you will still have some work to do.

"This mistake caves in and comes to an end, and my final dream continues on 'T.M. Revolutions "METEOR"

BUILDER's NOTES: Other things I did incase anyone wants to know or try to do, if something you want to know isn't here, feel free to contact me at extroden@hotmail.com!

From the Freedom:
A little trick I learned in the 1/144 HG Strike Gundam thanks to a complimentary Hobby Japan tip booklet is to trim down the head crests and split the skirt piece. As any of you have seen on the 1/144 collection, there is an excess 'tab' at the tip of each crest that can easily be cut off with caution using a pair of cutters and your X-Acto blade. Done right you can have a picture perfect Gundam head. As for the skirts, the recent outcropping of 1/144 kits have a sort of fat 'T' in the center of the part. Normally instructions just show them as one solid component but with some careful saw work, you can cut the part in half down the middle of the 'T' and make two skirt pieces separate.

From the Meteor:
Painting the missile tubes became my biggest peeve with this model, especially when the two larger ones were molded in glossy grade ABS (which are notorious for refusing paint, primed or unprimed). My little trick for this was to wash (thin coats of paint to fill in holes) the pieces with aircraft interior black and then come back and paint the surface with the right color. With the missile tubes pre painted in black, it takes no time to coat the tops with red paint. After this I came back and painted over the main body of the missile bay with my standard Engine Gray. This worked especially well on the front missile tubes.

Some of the surface panel lines on the kit were a combination of etched in lines and some raised panels, while some of the grooved in pieces can easily be done with a line marker, some were a pain to get right. Enter the Gundam Marker! Simply just ink in around the raised piece and wipe away the excess ink with a tissue and you've got an accented panel line.