Ever since I watched Godzilla: Final Wars on DVD, I fell in love with Goutengo, the savior of mankind. When I saw this toy at my local hobby store at discounted price, I fell in love more than before. Can this love turn to hate…? 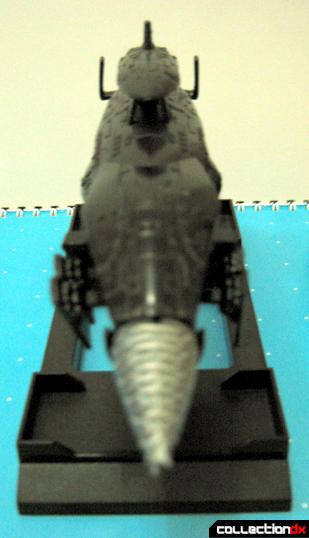 This Goutengo (Kaitei Gunkan Gotengo) is taken from the Godzilla: Final Wars movie. I think it’s the strongest ship in the movie. It defeats Manda easily.

Ok, enough about the movie, on with the toy.

Goutengo came with the usual box with styrofoam protecting it. First impression you have that it’s heavy though the box doesn’t say chogokin at all.

It comes with a display stand that you need to assemble and the Goutengo itself. The Goutengo measures about 18cm long. It has a fair amount of detail. 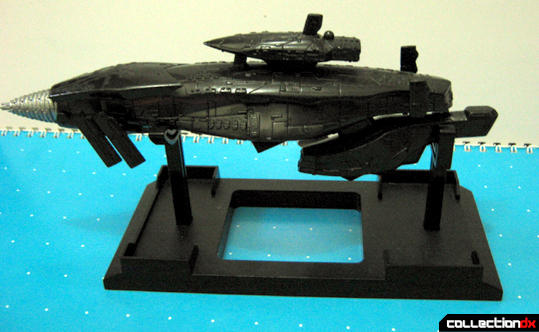 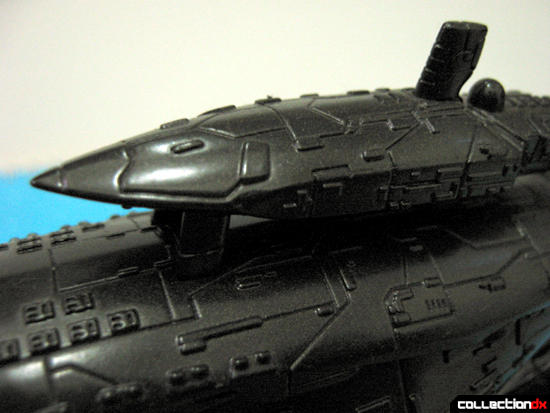 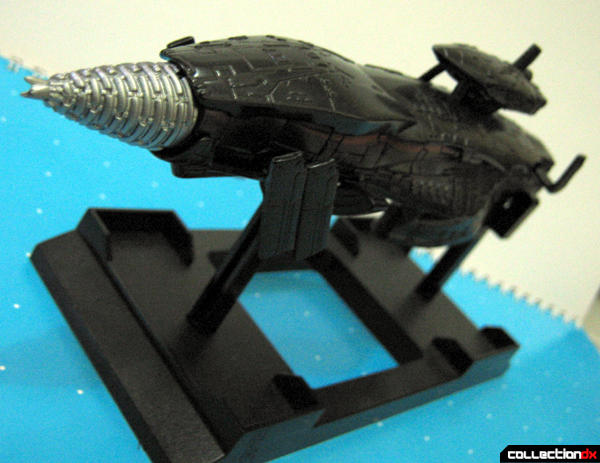 The bad thing is it has no action feature. You can move it’s fins and rotate the drill, but that’s it. No sound, light or action feature. It is just meant to sit pretty on your desk or your cabinet. Maybe I’m expecting to much from a 25$ toy? 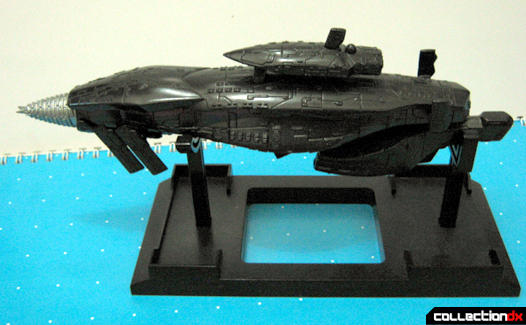 It may not be fun but with the price point I had (10$), I’m glad I bought him. After all, your vinyl Godzilla needs something to fight, right? 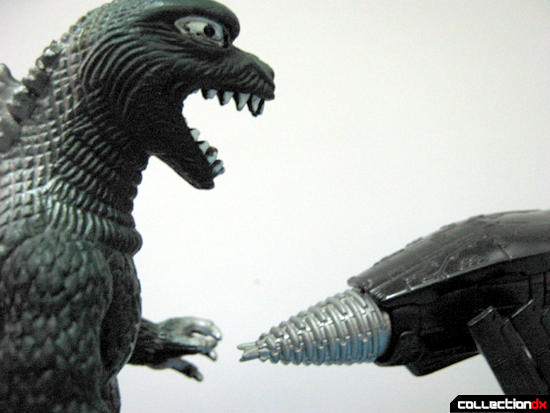 10 comments posted
Even though this has no

Even though this has no gimmicks, it's pretty cool. If I found one for $10-$20, I'd buy it, too.
You're totally NOT expecting too much for the price. In fact, the drill should be metal. I think we have gotten too used to getting bad toys for our money, and are too tolerant of spending $30 or more for toys that are essentially broken from the factory. We should expect something better than a faulty Rei Revoltech, for example, for the $25 or more that it cost. Of course, the only way to get the companies to make them better is to STOP buying them when we know they are of crappy quality. Then, companies may realize that they need to make a toy that has gimmicks, doesn't break when you use it the way it is supposed to be used (as a toy), and has some sort of quality control so it isn't broken in the box. There are toys I wanted, (Rei Revoltech 001, SOC GX-01 Mazinger) but knowing they fall apart when touched, or have gimmicks that look bad or don't work, decide they are NOT worth anything, much less the prices these companies charge for their faulty merchandise. I have a couple damaged SOCs and Revoltechs that no one would pay much for, but they're not much different from the ones that were faulty out of the box that I paid full price for.

Now, if you want a real Gotengo, check this out!

Man forget all that it's cool just because there isn't enough Yoji Shinkawa mecha merchandise out there.

I held off on this because it was being promoted as a "collectible" although your review makes it look like a decent enough adversary for any one of my hundreds of Bandai Kaiju (yes, some of us do love those junky bastards. Kidnicky, you are not alone)I've seen Gotengo on clearance all over the place, so I guess I better jump soon.

And as far as junky toys go, at least Bandai vinyl is sturdy enough for the sand box, and that is what vinyl kaiju is all about. I know you all saw those bullmarks in Saturday afternoon broadcasts of "Godzilla vs. The Smog Monster" US kids were so deprived! On the other hand, Microman is dead due to QC issues, and their price point was always quite reasonable. If mass produced toys intended for kids don't hold up anymore, you better believe I'm going to be cautious around a so-called "toy" intended for a collector. After all, if it's marketed as a collectible, it will never be considered a collectible. Star Trek 101, ya'll.

Oh man, those Bullmarks that kid was playing with in that early scene in Godzilla vs. The Smog Monster have haunted me my whole life! Of course, NOW, I have glowie reissues of most of those guys, so I'm good!

Hehe...it's funny how much of a grey area toy collecting can be. I totally hear you about Bandai vinyls being good 'nuff because they can stand up to sandbox abuse. I appreciate that. Really!

But while I'm usually the *last* to defend "adult collectibles", I still prefer the size/quality from an M1, Marusan, or Marmit. It's those guys making the classic (read: "Bullmark")-sculpted kaiju toys I love so much.

Same thing with that Aoshima Gotengo I reviewed. Totally high-end, modern "adult collectible" diecast...with the pricetag to match. Still, I think with the sheer quality on that, the quality of materials (and copious diecast), and cool electronic gimmicks, it justifies the price...at least for me.

Hmmm...does this mean I prefer junky robots and collectible monsters?? ;)

Have you seen those? Now that's cheap vinyl! Yet I love them so.

I like vinyl as a cheap toy, the best cheap toy. It's hard for me to distinguish between Bandai and M1 in terms of quality, since they're both essentially the cheapest way to produce a toy. Beyond design aesthetics and economics of scale, they're both produced in a similar manner, using similar materials, achieving a similar effect. They're both great.

There's a certain novelty in M1 and the rest that Bandai will never match. Likewise, Bandai's output possesses a certain credibility that a fifty dollar "toy" does not. I think vinyl is a terrific media for toys in general, and both types of manufacturers are doing right by it, in their own way.

If you can hand either one off to a kid, I'm down with it. No matter the price range, it should deliver like a proper toy. Vinyl could not be more "what you see is what you get" and that's what makes vinyl toys the best. Anyone who is disgruntled over their robot falling apart needs to simplify.

Agreed. Though I'd argue that M1 and the like are higher physical quality than Bandai, I think that's moot and already been discussed before. I enjoyed your point that as long as you can hand it off to a kid and it won't be ruined in under 30 seconds, it's a "toy". I'm all about simplifying!

It was cool, but I sold mine, just could not get into owning something so small, it is the size of a paper weight.

Thank you for the comments

@seraph: Actually I was quite happy with it. It just my main core of collection is Sentai robots where I can play with while Goutengo is like a display model. 10$ is great price although the original price is also quite reasonable in my book.

" Likewise, Bandai's output possesses a certain credibility that a fifty dollar "toy" does not."

Hell yes.
I don't know if I mentioned this before,but you know those s****y Mattel Infinite Heroes that are out now? I have like 20 of those things.