THUNDERBIRDS...are go! Thunderbird 2 is made of die-cast and high quality plastic manufactured by Aoshima. It has nice paint works, metal stilt legs, and removable container car.The weathering version comes with the mole vehicle. 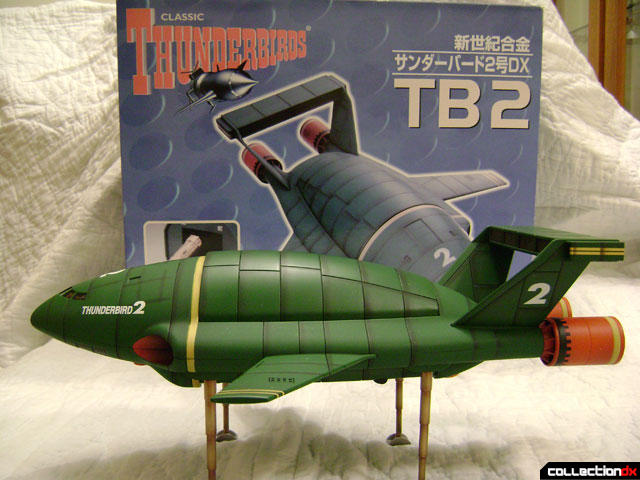 TB2 is around 15 inches long top to bottom and has a nice solid feel. 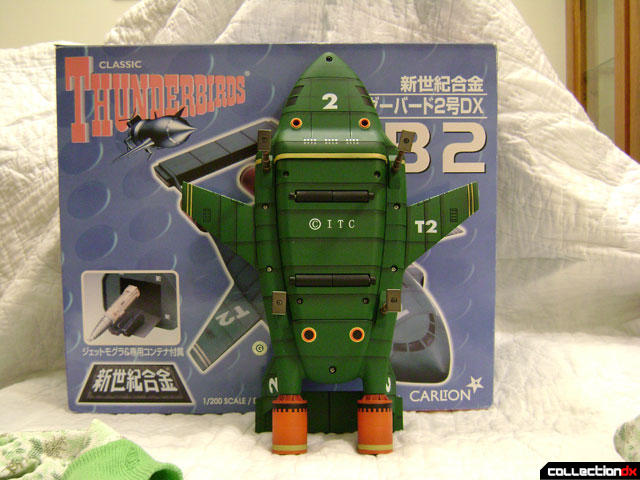 The outside edge of the craft is all die cast, the tail section, container, and front cone are all plastic. The front cone has plastic windows and you can see little seats inside. 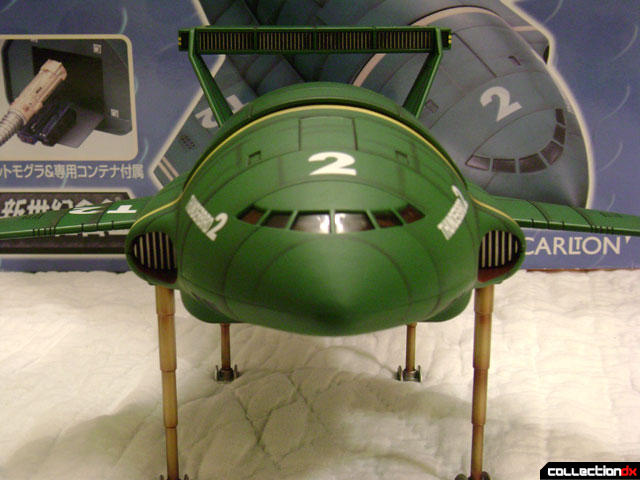 The vehicle has metal stilts that do not collapse or retract, they are solid metal that you put in peg holes allowing you to push out the container and have that classic "Thunderbirds are go" scene. 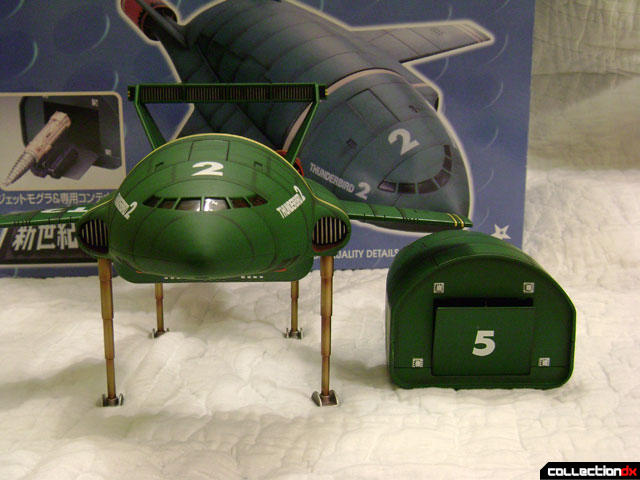 TB2 was a long crazy arduous journey for me to find and after finally buying one (which is why I am writing this)...it was like Dickens Tale of Two Cites... it is the best of chogokin and the worst of chogokin... TB2 looks incredible...the paint, the detail are great 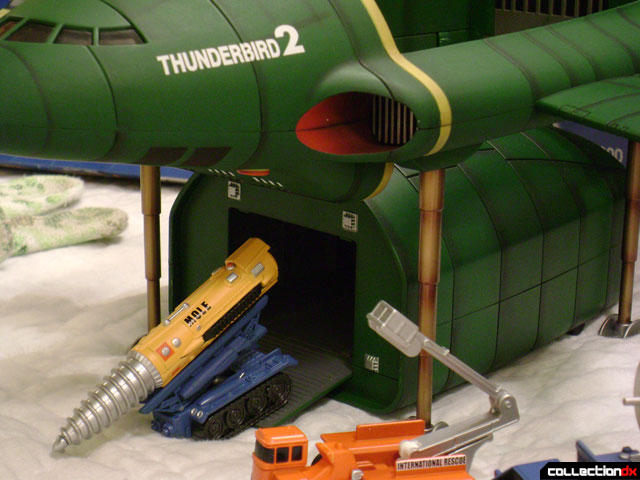 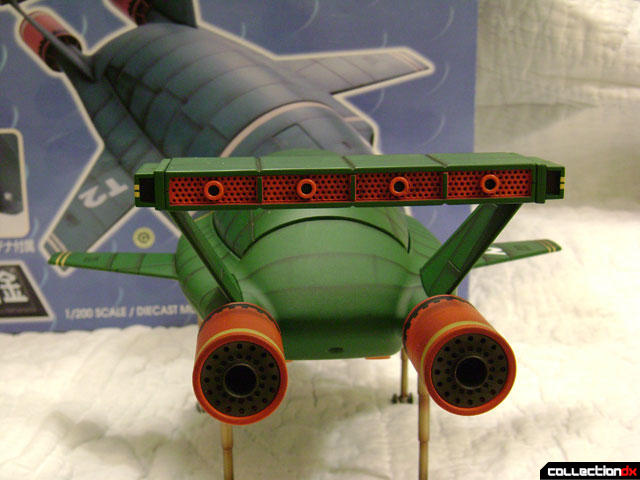 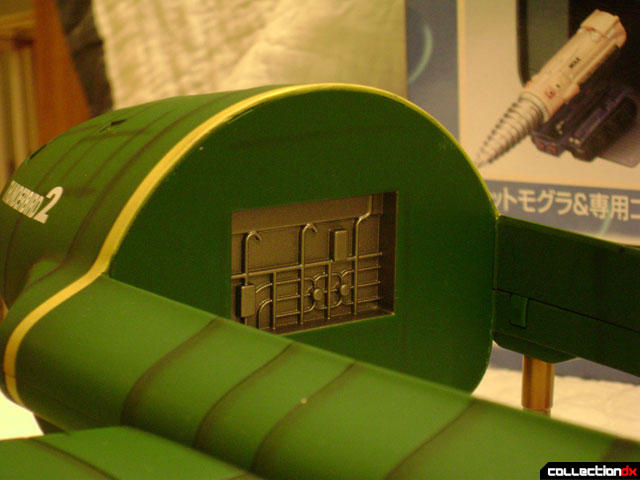 However, it is not a toy, it is definitely just a showpiece (similar to the Anderson Space 1999 die cast collectibles), because it really does not "do" anything. The Aoshima TB1 had moving wings, trap doors, little accessories...but TB2 has none of these attributes. The other major flaw in my estimation was whenever you push out the container (I closely followed the directions), it creates a rub mark. 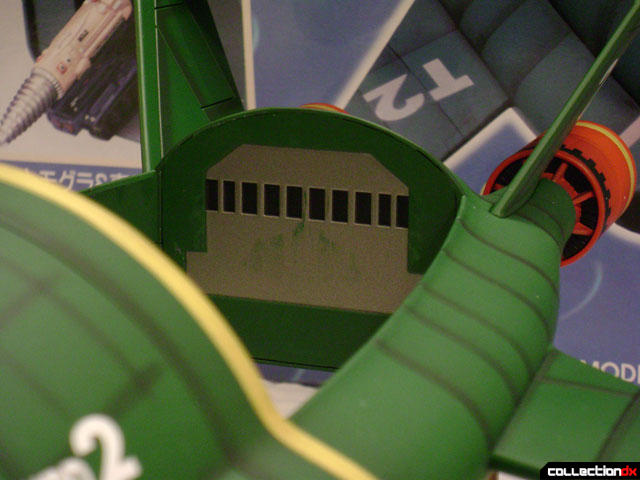 I carefully own and take care of everything...I even wear gloves...so you can feel my pain when at first I thought it was green paint from the container on the silver, not the silver being rubbed down to the green plastic below. Therefore, the only thing you can really do with the vehicle is the same thing that damages the paint. You may have noticed the little die-cast vehicles spotted around TB2, you can actually buy the three sets, sold through Hot wheels (they are actually listed on side of TB2 box). Not all the figures are correct to scale (most are but the Tracy figures would be like 15 feet tall!!!), however, they are cool and add nice display touches. 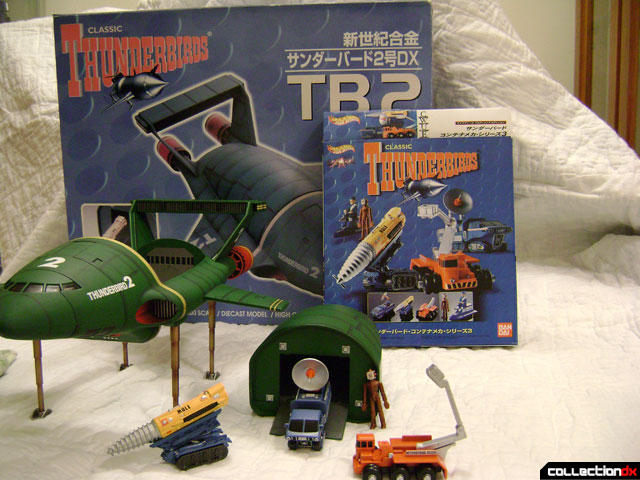 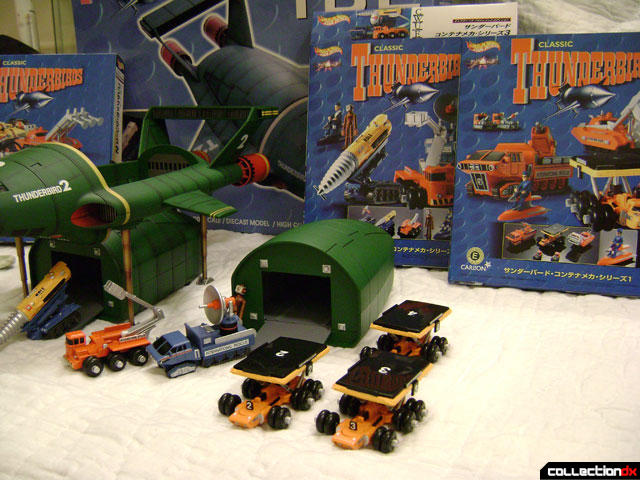 One word of caution so you don't get annoyed, the vehicles Aoshima include with either version of TB2 have better detail (like rubber treads) than the hot wheels ones(plastic treads with wheels)...but they look the same, are die-cast, and do have nice feel and articulation. 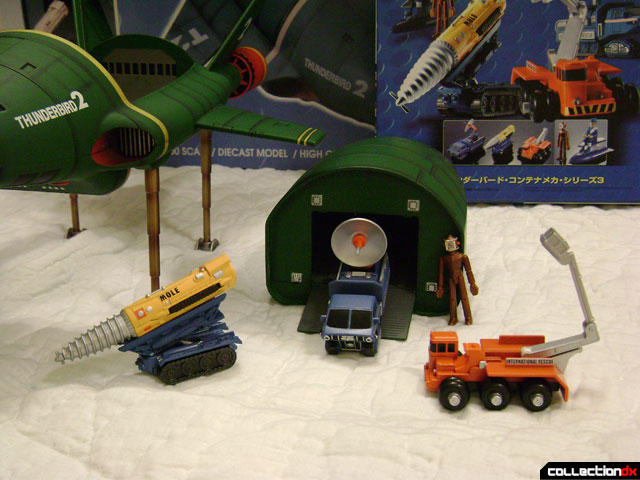 There are two versions, the weathering DX (this one) and normal version, weathering comes with the mole, regular comes with the sub, I have never seen but saw pics of regular version with a different vehicle. I got so annoyed one how little it does ( I like switching gadgets, posing, etc..) that I almost sold it... but it just looks so darn cool, I had to keep it. Mine was extremely hard to find, a toy dealer told me they were everywhere two years ago marked down to like 90 USD. Me, I paid a WHOLE lot more. I recommend you buy an extra container or two and get the Hot Wheels set, a guy on eBay is selling the 3 hot wheels sets (each set contains a different Tracy) for like 26 USD plus shipping, so those are easy to get.

Bottom line is if you want a great looking piece, large, imposing, and well crafted - track one down. If you want something that you can fiddle with, pose, use many accessories, then Thunderbird Two is NOT a go for you. Maybe get one of the all plastic versions that rise up, make sounds or something like that. 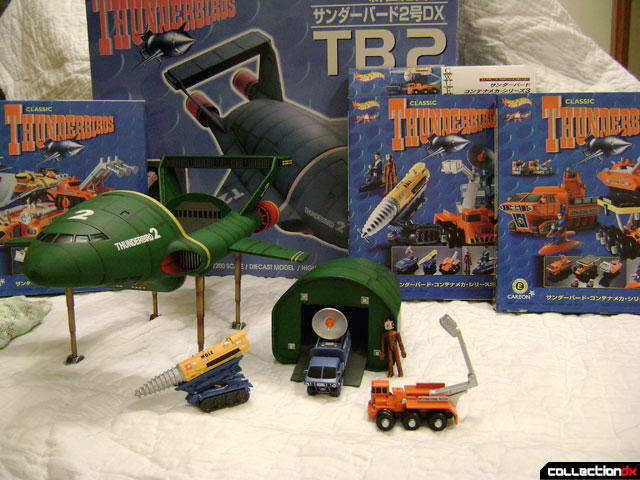 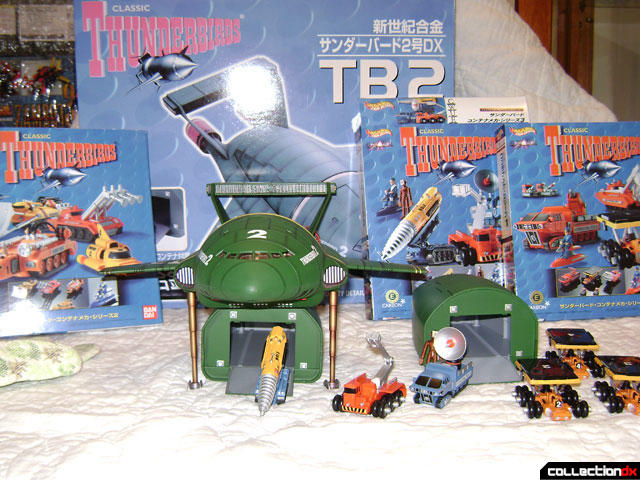 I'll have to show my Taito Super Mechanics one. All around a better value in my opinion, and the Konami Gashapon Pod Vehicles are scale. No diecast, but for the money it's great.

The 1/144 Takara one made this obsolete, but since it was made in low numbers it came and went fast, these still linger about. The original Bandai DX one this was retooled from came with more stuff, and did more too, but it was made to be a toy and wasn't as fancy.

The chara-Wheels sets got really cheap, they used to be $50 each! Their biggest issue is they're still Hot Wheels, so the detail is lacking when compared to an Aoshima piece.

I wouldn't get to upset with that paint rubbing, it is "weathered" after all, it just gives it a more realistic look.

thanks for the comments:)
and Thanks to Josh, I know this review was a pain to upload, but the pics came out great this time, now that I got a tripod and a better camera