Return Of The Fly

Among all the 12" classic horror offerings released in the last few years, mostly by Sideshow Collectibles, one piece tends to get a bit overlooked. Majestic Studios released their Return Of The Fly action figure in 2003 and it's a very nice addition to have in your monster lineup. It's based on the movie of the same name released in 1959 and starring Vincent Price, who appeared in the original version "The Fly" as well in the previous year. Price played the character of Francois Delambre (not the monster) in both movies, but did not appear in the trilogy's final entry, 1965's "Curse of the Fly", as by this time he was under contract to another studio. 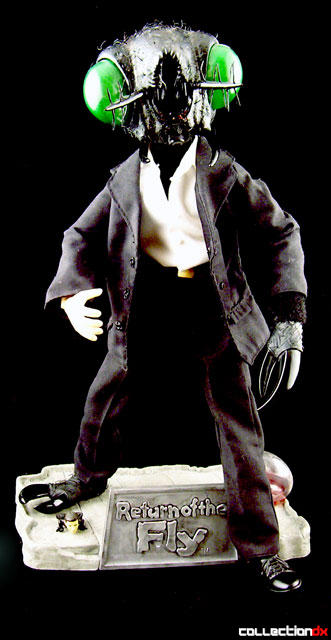 This is a really neat figure. I bought it mostly because I got a good deal on it, (it retailed for about $40, but I got it on clearance for $15) but I'm reallly glad I did. While most of my 12" figures are in storage due to space limitations, this is one of only three that still gets displayed. I really like the big fly head with the shiny green eyes and the claw hand and foot add a nice touch of menace. The neck and upper chest have hair on them, but besides these things the rest of the toy is just a regular guy in a suit. You can unbutton the jacket, shirt and pants, but it doesn't appear that you can unbuckle the belt. 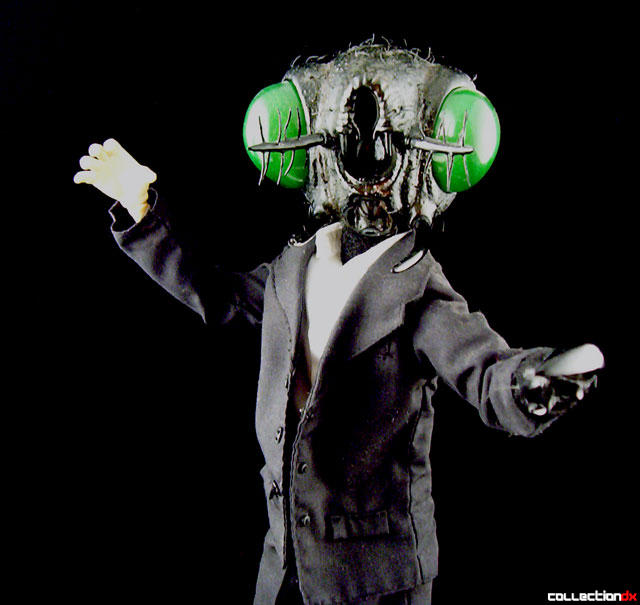 There are 15 points of articulation (ankles, knees, hips, wrists, elbows, shoulders, waist, chest and neck) allowing for great poseability. Though it's generally referred to as a 12" figure, in reality it is more like 13.5" tall. 14"+ if you measure from the botoom of the included base. Speaking of which, this is a really neat add-in that you don't get with the Sideshow releases. The base is about 7"x6" with a "Return Of The Fly" plaque on the front. Also included is a tipped over jug of red liquid, presumably blood although I don't remember that from the movie. Of course, it's been a few years since I've seen it, though. Rounding out the presentation is of course a fly with a human head. Unlike the David Cronenberg remake of the 1980's in which Jeff Goldblum gradually becomes a fly, in the originals the main character actually has his head, arm and foot SWAPPED with a fly after his teleportation experiment goes wrong. So if you have a big human toy with a fly head, you need a little fly toy with a human head. 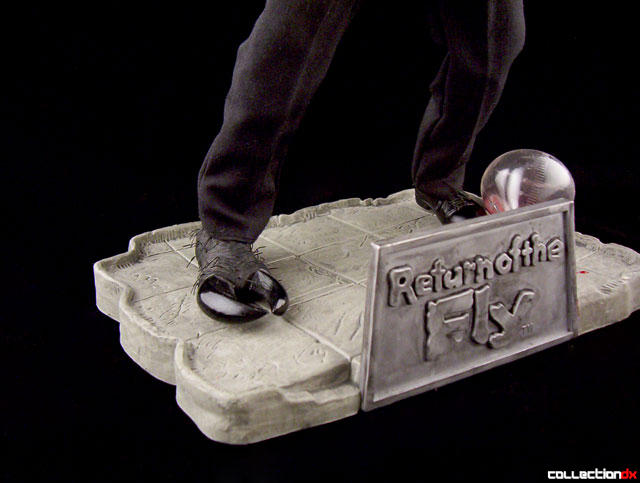 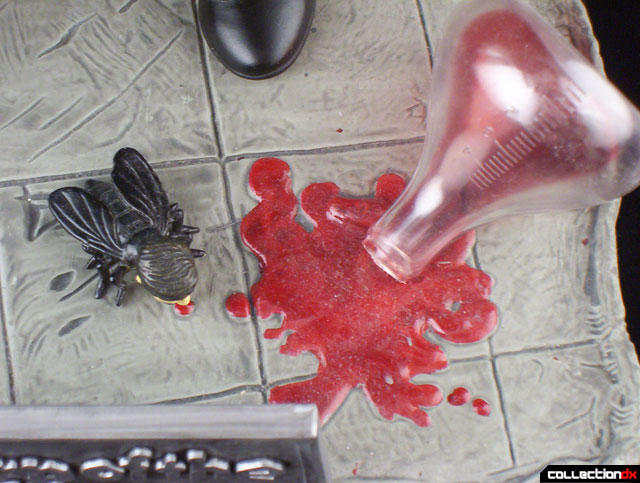 I must say that the guy doesn't seem to be too bothered by having his head on a fly's body! 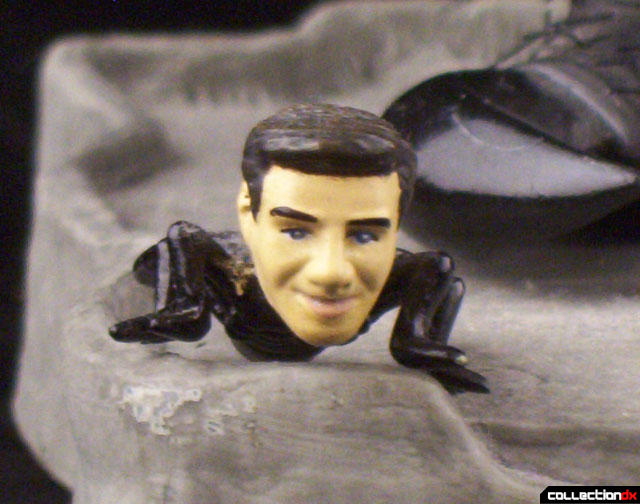 My biggest, and really only, gripe with this toy is the box it came in. Unlike the Sideshow 12" figures, and even the later Dr. Phibes one from Majestic Studios, this does not come in a sleek box with the movie artwork on front. Instead it's a much bulkier box with a cellophane window on the front. It's one of those boxes that really doesn't lend itself to collectability. Mine was destroyed and thrown away. And if you know how obsessive I am about boxes, then you know how much of a hassle the thing was to deal with. This is why I can't provide a picture of it for you.

But I definitely recommend this to monster fans, especially if you can find a good deal on it like I did.

And if you were wondering, yes, The Misfits song "Return of the Fly" is indeed about this movie. 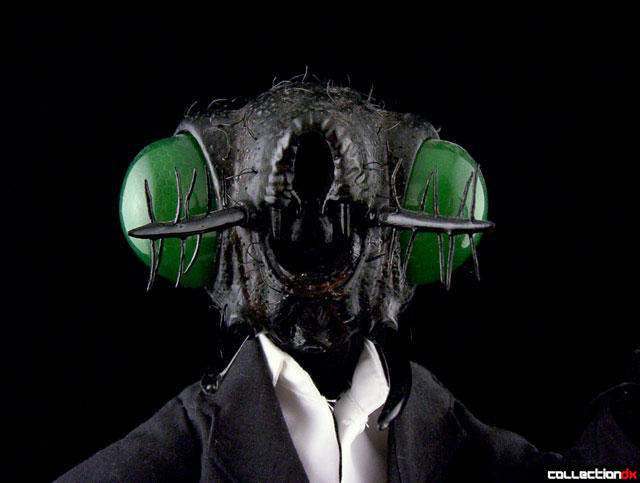 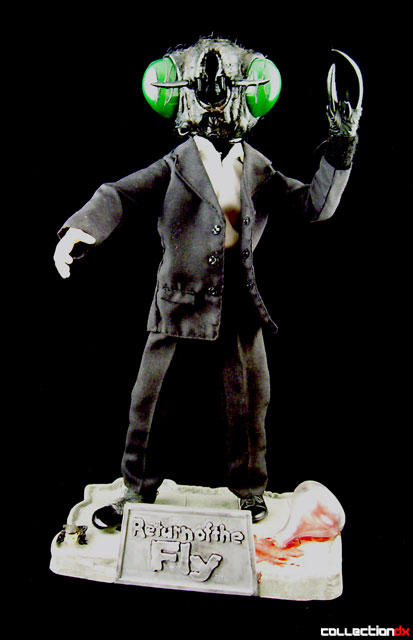 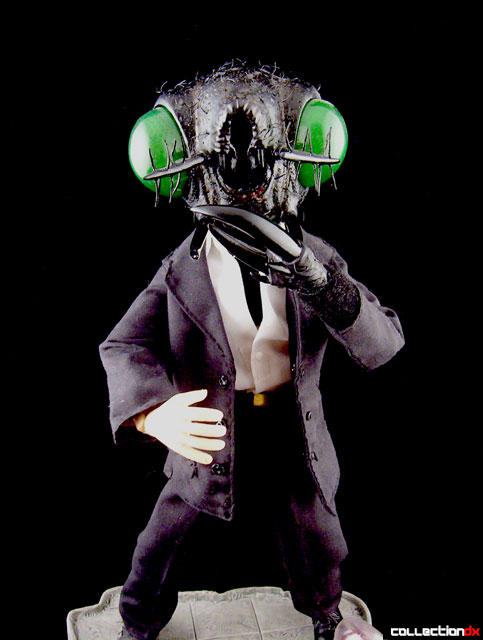 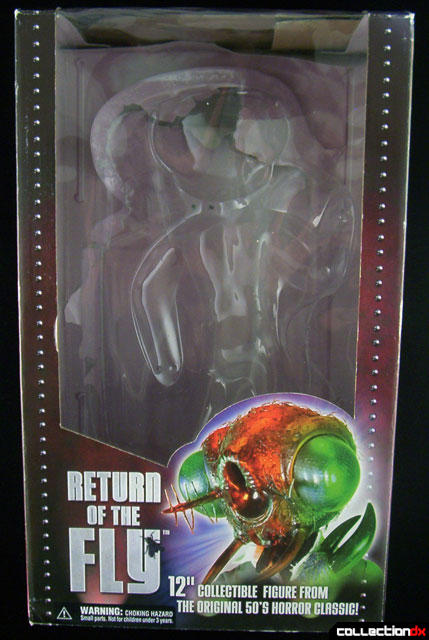 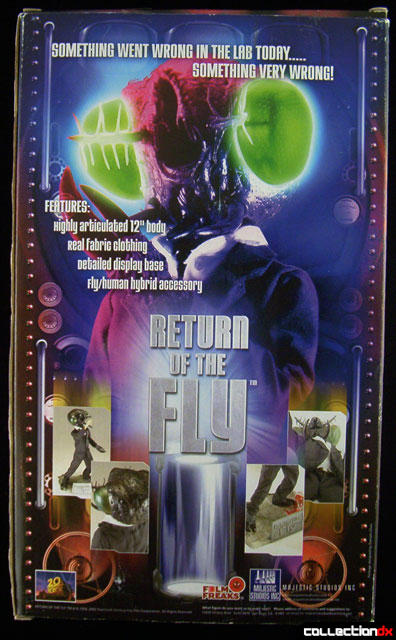 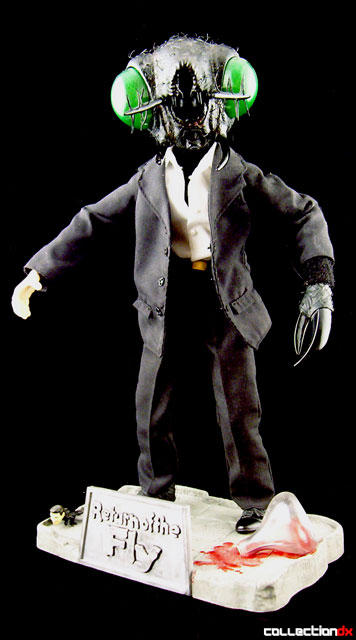 It seems that my box was not "destroyed and thrown away", it was only damaged and stored away. So I took some pics and added them to the gallery. You can see how the interior plastic gets torn off the cardboard back when you remove the figure.