The secret Wind Ninja Academy near Blue Bay Harbor, CA has been attacked in an unprovoked strike by the evil Lothor and his army of space ninjas! Though the administrator Sensei Watanabe put up a gallant fight, he was unable to prevent the school from being destroyed, all of its students and teachers from being kidnapped & held within Lothor’s orbiting insect-like asteroid base, and himself from being forcibly transformed into a guinea pig! The only hope of victory and justice now lies in the hands of three less-than-average students from the Academy who were fortunate to escape capture because they skipped their lessons that day. With his son, Cameron, providing the technical expertise & know-how behind the scenes, Sensei instructs the students in how to become the Earth’s greatest defenders- the legendary Wind Power Rangers! 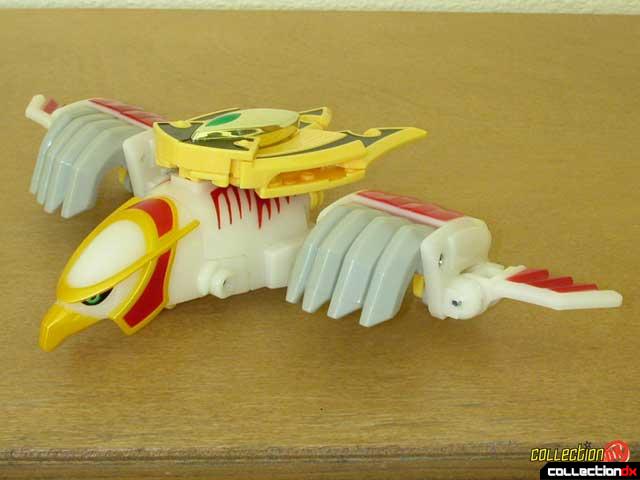 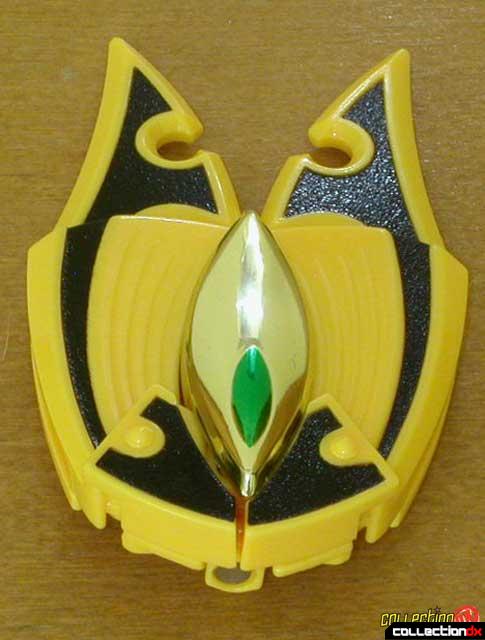 Cameron "Cam" Wantabe- the Green Samurai Ranger- designed & created the Ninja Firebird as a much-needed addition to the Zord arsenal as a result of the evil space ninja master Lothor's increased attacks. Cam used his experience, in working with the Mini-Zord technology from the Thunderstorm Megazord, to create the Ninja Firebird. This finally allowed all of the Megazords to morph together into one giant machine- the all-powerful Hurricane Megazord.

The Ninja Firebird forms the head, crown, and hands of the Hurricane Megazord;
each section coming from it its own separate Power Sphere (or just "Sphere", for short): 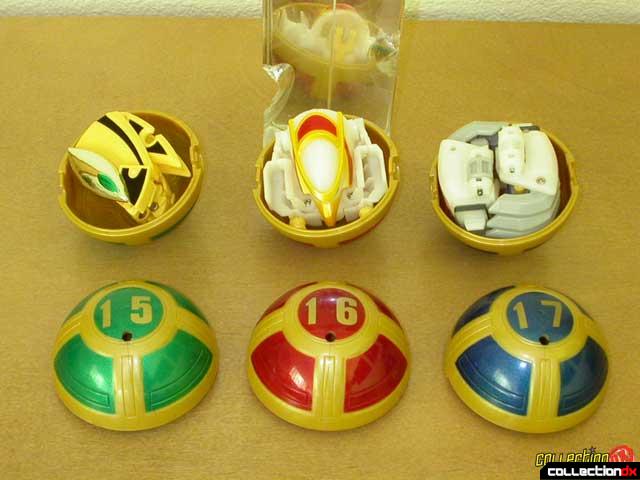 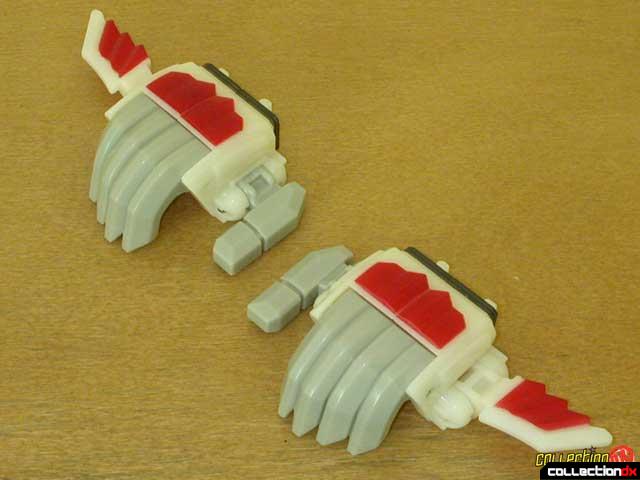 Power Sphere #15- launched from the Samurai Star Megazord- contains the crown of the Hurricane Megazord. This section forms the tail of the Ninja Firebird.

Power Sphere #16- launched from the Storm Megazord- contains the head & face of the Hurricane Megazord. This section forms the body of the Ninja Firebird.

Power Sphere #17- launched from the Thunder Megazord- contains the two hands of the Hurricane Megazord. This section forms the wings of the Ninja Firebird.

This is how it changes into its bird mode:

This little machine animal kind of reminds me of a sparrow wearing a Greek helmet, or an ancient mythological Japanese bird. 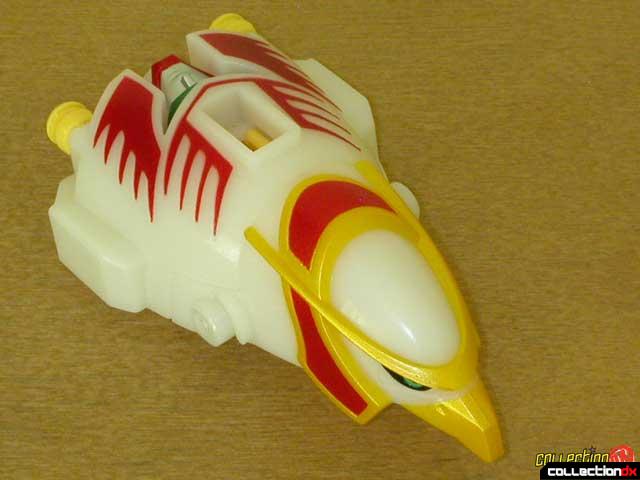 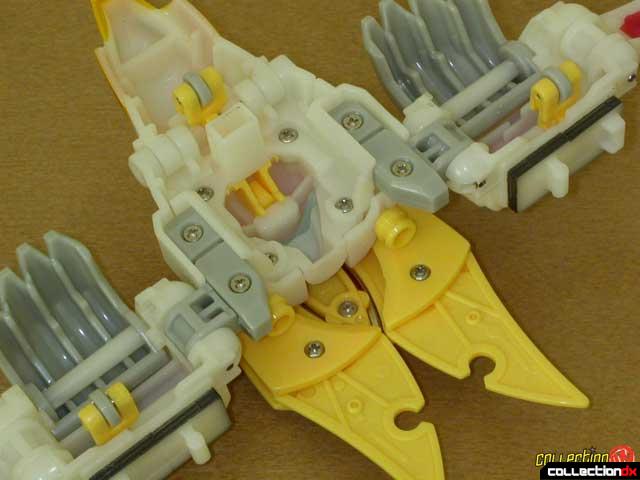 There is a large gap underneath it, but this can be easily overlooked. The points of attachment are strong, but can be separated with ease. However, on the two hands, the joints for the mini wings & thumbs are a little tight, so you want to take care with them.

The Ninja Firebird features no weapons of its own; however, one time it was used to distract a monster so that the Rangers could make a temporary escape & regroup.

For those of you wondering what the differences were between the Ninja Firebird from "Power Rangers Ninja Storm", and its original Japanese counterpart- Karakuri Ball Set #04- Tri-Condor from "Ninpuu Sentai Hurricanger"- they were only cosmetic:

Pleasantly enough, there was no difference between the Ninja Firebird and the TV-version of the Tri-Condor; the changes were only to the Power Spheres. And, there were few changes to the DX Samurai Star Lighting Megazord, which was the only way English-speaking audiences could get the Ninja Firebird. This is helpful because, at the sacrifice of the KB #09- Spin Bee, you could get a perfect Tri-Condor set, and a near-perfect DX Tenkujin in the same US box for less that getting the two Japanese sets separately.

I have bought myself a Tri-Condor Karakuri Ball Set 05 along with Karakuri Ball Set 01, Tortoise Crusher (Tortoise Hammer and Goat Crusher set). Looking back at my unopened (but unsealed) set of my Karakuri Ball 05, I found that the one in the photos reviewed above does not look as glossier. I mean, the part on the Bird's body where it looks to me fully yellow but mine seemed to look a bit sparkly or glossy with a touch of minor golden feeling. I don't know whether the flash of the camera affected it but I can safely say that the Tri-Condor does have a glossier finish on that yellow bit that forms the important shape for the head of Tenrai-Sempuujin. Oh, and you forgot one important element, the Shinobi Medals. 3 Shinobi Medals are actually included in the Tri-Condor set which are coloured Red, Blue and Green which is seen to used whenever the Hurricangers are to initiate the Tenrai-Sempuujin formation. I have the US Versions of the Storm and Thunder Power Megazords and I know that the medals are not included, simply because the writings are in Japanese on the Medals. These medals might be compatible with the Hurricane Gyro or the Gourai Changer.

Uh- actually PR audiences did get the Shinobi Metal, but just in the Wind and Thunder Morpher sets; the Samurai Morpher was completely remade from the original Japanese version, and thus did not contain a Shinobi Metal.

But, yeah- you're right about the glossy finish on the Tri-Condor. BA removed the pale-pink gloss from the White Tiger Wild Zord the year before, so it's no surprise that they did the same here. Unless you really want the extra sparkle and the three Shinobi Metals, this set is just fine as a fill-in. Of course, you had to get it with the Deluxe Samurai Star Lightning Megazord, but there wasn't anything missing from that set either. Getting these two sets for the price of one of the Japanese sets was a steal!
------------------------------
CollectionDX Staff

Well I don't know why for some reasons, there's a local shop at my place that sold me the DX Tortoise Crusher and the DX Tri Condor Karakuri Ball Sets (without going through bandai Hong Kong and Malaysian Agent) at a very very low price. My DX Tortoise Crusher was RM20 (US$5.5-6) and the DX Tri-Condor was RM25 (US$7-7.5) and it was very cheap considering the prices were 2000 yen for Tri and 1500 or so I remember for Tortoise. I might do a review for them since I don't see them here. I might be able to point out the differences of the US set and this Japanese set I have here. My biggest regret was not able to get a Tenkuujin/Samurai Star Megazord to complete my set. I only have a US assembled Gourai-Sempuujin but if I had the Samurai Star or the Tenkuujin, surely I'd use my Karakuri Ball Set 05 to make the assembly instead of that US piece.