Spawned by Bungie and unleashed upon the world through the power of X (now on PC, cheap pop) come the star of the video game HALO: COMBAT EVOLVED, Master Chief. It might not be a Japanese robot toy, but for all intents and purposes it's a bad ass cyborg in a toy form. The good news is that it's a well crafted piece for a decent price however there are some flaws that wouldn't be a bad idea to correct. 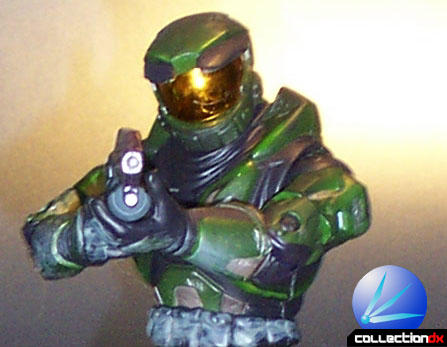 Background:
In a game booklet quality description: Master Chief is the sole surviving member of the SPARTAN project. His mission is to take on the onslaught by an alien alliance known as the Covenant. Decked out in a specially crafted armor called 'Mjolnir' he remains the only hope for humanity.
For a lot more background information check out the game's prequel book THE FALL OF REACH.

In the Toy's Creation:
When the group Joyride was born, the first thing planned from their gates were detailed and quality enriched figures based on video game characters; ranging from the usual statuesque shelf pieces to game accurate posing citizens of Toyland. When they opened it was only a matter of time before they picked up Halo. Sure as it seems the premonitions would come true when at last year's big Toy Fair they unveiled the prototype of the 'Ring Romping and Stomping Bad Ass'. As it would seem, Halo became a top priority project, with Bungie sending in some of its own three dimensional craftsmen to aid the up and coming toy makers. One of the things planned with their help would be that the figure can pose as close to the game as possible. The quality of the figure now some how doesn't feel like it was intended to be so weak in comparison to its high gloss painted prototype and metallic flaked and scarred CG origin.

Articulation:
The figure comes with 20 points of articulation designed specifically for copying (or rather attempting to do so) the CG version of MC.

The head and torso make up the more limited areas of articulation on the figure. The torso is a sort of rotocast (balloon injection/glued together) block with only a large peg in the waist for 360 degrees of movement. Same amount in the head, and sadly there's no neck joint for any up and down movement.

The Arms start at a ball peg insert into the torso with a full 360 degree rotation, which connects to the door hinged shoulders with a minute 90 degrees of movement up and down. The biceps split just before the elbow region with a peg and socket construct so that the forearm can rotate around from the sides and around the chest, with the elbows sporting the continued 90 degree law. Finishing off the arms is the hands with the biceps' same peg rotation for a better chance of posing the figure with its weapons.

The legs have no real rotating movement at the base of the hip as the arms did on the torso, so construction is a more static forward and backward movement of 90 degrees. At the base of the thigh, the knees are connected with the same peg insert as the biceps. The difference here is that the segment doesn't go half way up the leg with it being so close to the knee. Again 90 degrees likes making its presence known as the knee has the same range of motion as the elbows. The feet are jointed at the ankle with a rough 90 degrees of movement (toe on ground to toe extended downward). As it might sound limited; the feet and legs are 'foot step' quality.

Overall I think the movement range was unavoidable since an action figure replica cannot mimic everything. The arms can relatively copy any weapon pose and the legs are capable of some good dynamic poses with or without a super articulated hip joint. Like I said briefly, the legs do possess a sort of foot step range of motion. One serious problem I've found is that with the figure's construction being without any metal at all, joints become very susceptible to wear and tear. Out of the package the left arm was very loose and the waist is uncontrollably loose. Normally I'd suggest that using super glue as a fastening agent, but without any way of dismantling the figure (cleanly that is) it's SOL.

Details:
If anybody has seen the game then you'll notice the extreme detail factor. Ranging from photo realistic blades of grass to serial numbers on spent shot gun shells lying on the ground next to the stack of your opponents' bodies.

*side joke: I TAKE SHELTER IN THE SHADE:Â¦ OF THE MOUNTAIN: OF BODIES! *back to the figure*

Where he game stresses detail, the figure fails to possess the accuracies Joyride advertises. The figure comes with simplified detail taken from the CG model with some of rendered scarred areas etched into the figure. Sadly the color scheme isn't as chromed as the CG version and the colors seem to fall flat in comparison. Instead of the fully body paint job unveiled last year; the figure's full color comes from the plastic used. The majority of the body is a forest green with a silver glitter injection with the black and gray areas being painted on. There is some burnt style air brush work scattered out on the body, but its nothing compared to the original. The one thing that I will say truly captures the game quality detail is the face plate on the helmet. It's actually a tacked in highly reflective piece of orange chromed plastic which captures the space suit style intended. To paraphrase a moment of the book, it's an alien feel of looking into a face where all you see is your morphed reflection. Overall I feel that some of the detail could have been done a lot better.

Accessories:
What's a first person shooter game without toys? Guns that is, lots of guns. As it's the first of a set, this Chief stays true to the game's start with its minute selection; the pistol, assault rifle, and the sniper rifle. The pistol is rather small so placing it in the hand takes some delicate fighting to get it between the fingers without dropping it. Also, the game's style of grasping the gun is nearly impossible with the figure's limited joint movement. As for the assault rifle and Sniper rifle, posing is much superior and not as bad. There's some of the same, slight touch to ruin, positioning in the hands to go through, but the results are as game accurate as they can be. The assault rifle can be held in a number of ways without dropping. The sniper rifle does have a bit more fighting to get posed correctly. Also the kick stands at the front are very fragile and have a tendency to snap if not handled carefully. Detailing on all the weapons is really simplistic, flat color separations without the gloss coating as it is in the game. Overall they might look the part, but the cartoonish style take away some of the character.

Since it's the first in a series, it'll be harsh to rate this as bad, but on the 10 scale; I give it a 6. Good to see a game character that's actually worth a figure, but it's off to a bad start.

Supplementary:
At this time I'd like to point out that there are currently three version of Chief available; the standard version (wave 1), an Exclusive from Joyride themselves (a clear variant; 'active camouflage'), and a limited edition 'battle scarred' version sold through Gamestop. 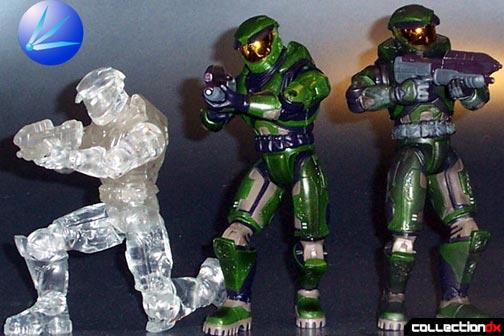 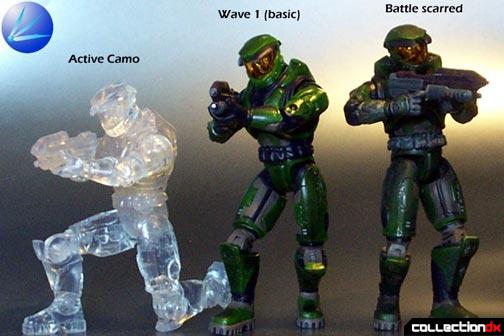 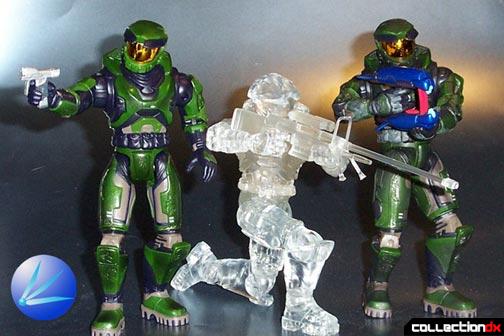 I got the Clear version through the mail (UPC code and $5 with the order form) and to say the least it suffers from the same problems as the previous wave 1 Chief. Also note that it's made from a bit softer material and the hands are a bit weaker. Hence a lot more joints are loose to the point of the figure being a rag doll. As far as the weapons go, it comes with the assault rifle and sniper rifle, but it lacks the pistol seeing how with it being clear it faces the fate of being lost. As for the battle scarred edition, I must say that there's defiantly a lot of improvement to expect in the line. The joints in the arms are reinforced with broader pegs and the loose areas in the Wave 1 figure are gone entirely. The paint scheme is pretty much comparable to any battle scarred series: same figure color design, only the grayed areas are more weathered and there's silver dry brushed into some crevices and breaks in the armor. Sad to say it suffers from the overkill effect where they brushed areas for the sake of doing so. On a side note, there's a difference in the texture between the normal edition and this version; the scarred version feels more rough and tacky where as the original is smooth. In the accessories, the Battle variant comes with a scar brushed assault rifle, pistol and a teaser for the upcoming Wave 2 "Elite"(those who know the game, they're the guys that go "WORT WORT WORT'), the plasma rifle. The plasma rifle comes with a chromed paint job and sadly lacks the same game detail as the rest of the weapons do. However, there's absolutely NO grip conflict. Overall, the better figure to go for is the scarred version. Better detail, better handling, so on the 10 scale I give it an 8.