Like many mecha fanboys, my jaw hit the floor when photographs began circulating of Studio Halfeye’s perfect transformation Getter. This toy was a revolution in henkei design, a beyond-intricate origami exercise executed in resin and screws, produced in a small shop, and largely the work of one man, Hajime Takashima.

More designs have followed, each an apparent wonder of engineering and innovation. The characters are (often) obscure, the photographs breathtaking. Unfortunately, these toys are laughably expensive. The cheap offerings are $80-$200, and a Perfect Change Dancouga Nova will run you $800. And again, we’re talking resin and screws, and small.

God Gravion is one of the "cheap" offerings, a "compact" model intended to appeal to people like me, curious fans who can’t afford the more substantial bots.

Reviewing this piece is really an exercise in futility. I can’t call it a toy. It’s more of a high-end collectible model which resembles a toy, but is somehow junkier than a toy. Josh often likens strange toys to folk art, and I guess that’s as good a descriptor for this as anything. Really expensive folk art. I feel like my usual frames of reference for comparison are useless. 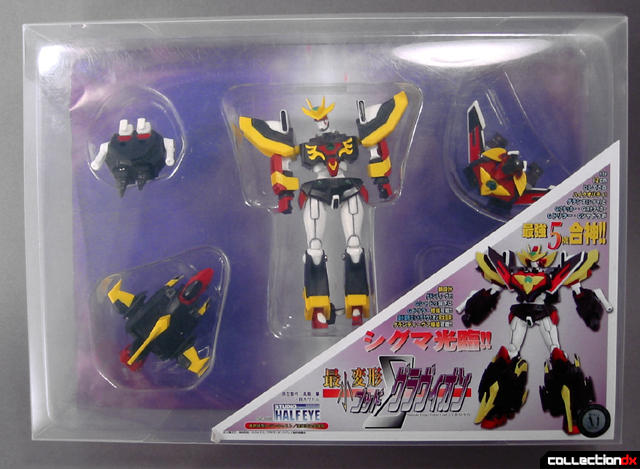 Gravion comes packaged in an anonymous, clear plastic box (7.5" x 10" x 2.5") with photographs and text on the back. Inside, the individual pieces (the Gran Kaiser core figure and four ships), rest in a plastic vacu-formed tray. The box art unfolds to display color photographic instructions, very clear and well designed. 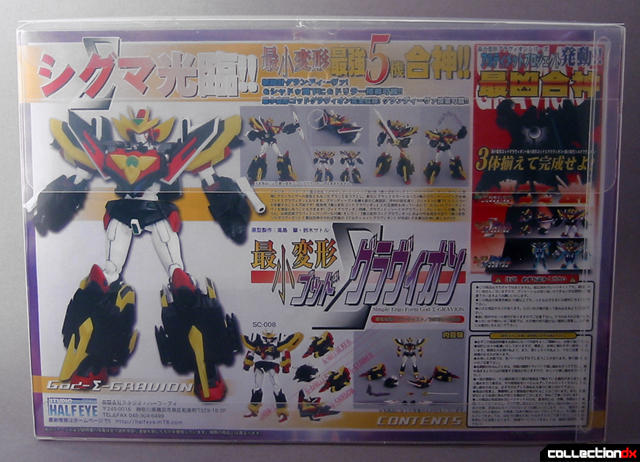 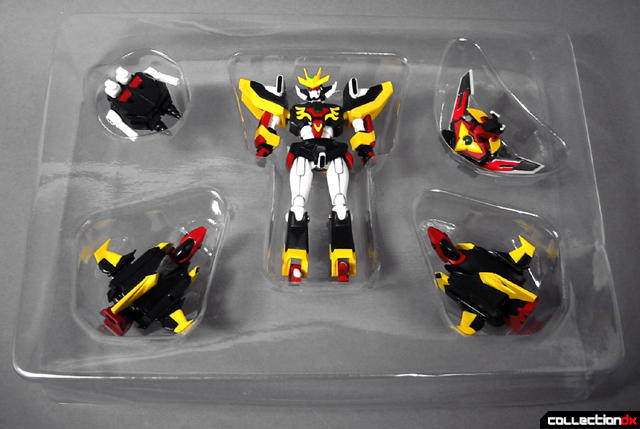 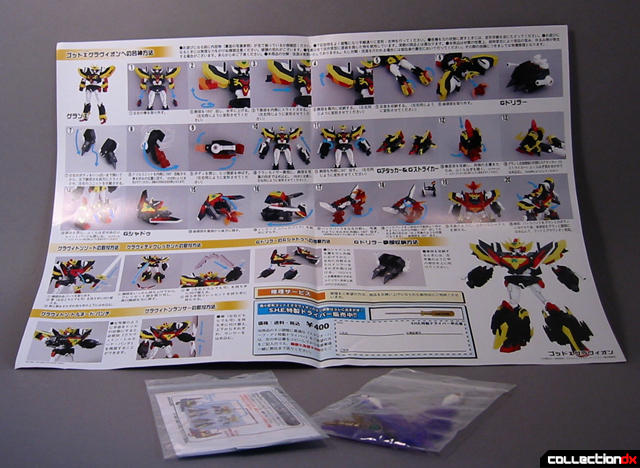 Accessories are packed in small ziplock bags- extra fists, a couple of swords. I believe the purple swords are of a limited edition.

Everything is cast in colored resin, which is surprisingly plasticky and solid. The dark gray resin sparkles slightly. There’s no gumminess or sliminess, and the edges are crisp. Paint apps have been used to add details. While painting has been done by hand, it’s fairly precise, although the wash used on the thigh panel lines looks like a second-rate gun-pla job.

The Gran Kaiser figure is similar in scale to Microman or G.I. Joes, 3.75” tall. It is only adequately articulated. The neck can swivel. The shoulders rotate, the arms can flap and swivel. The thighs are on ball joints, but are limited by the skirt. The knees and ankles bend. It all adds up to surprisingly limited movement. But the figure isn’t the draw here, the God Gravion formation is. 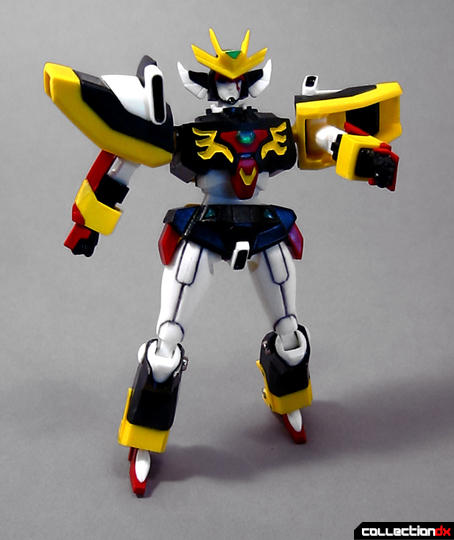 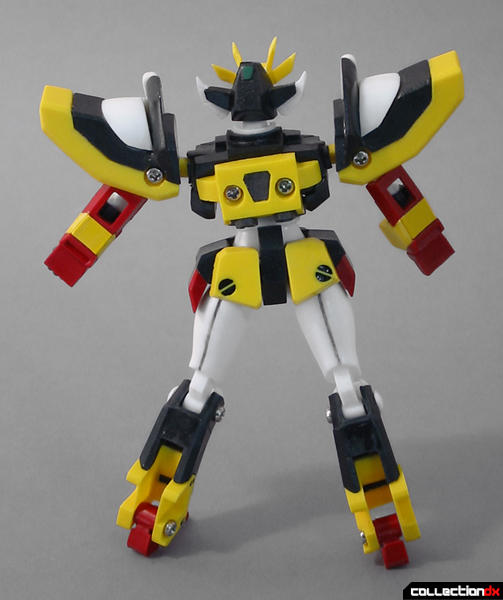 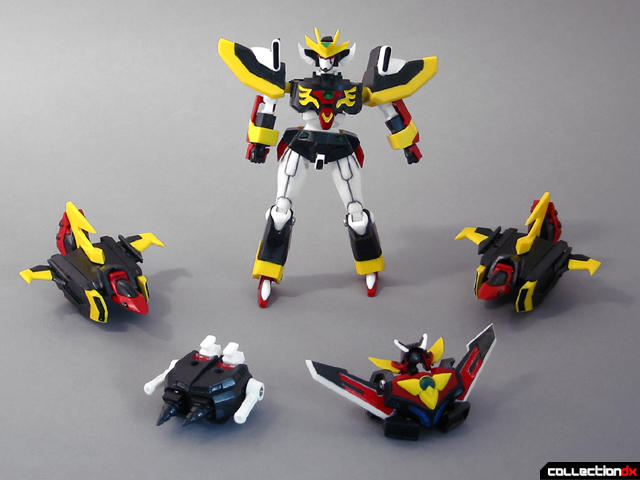 Two identical boxy ships, the G-Attacker and G-Striker, form the boots for god mode. You fold up the wings, slightly retract the cockpit, and fold out a bracket/clip piece from underneath which will lock into Gran Kaiser’s calves. 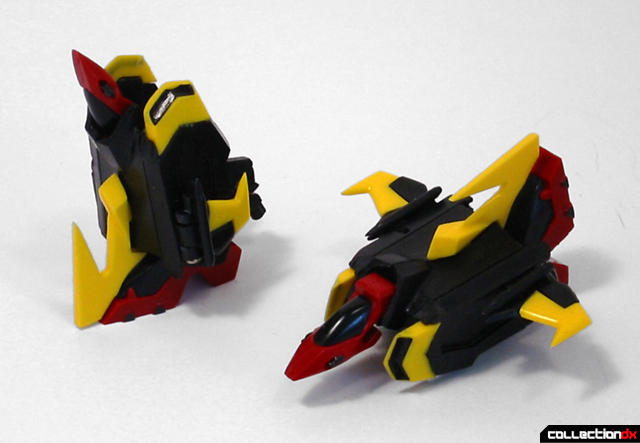 The G-Driller ship separates into two arm pieces, with the drill bits rotating into the body, the fists out. 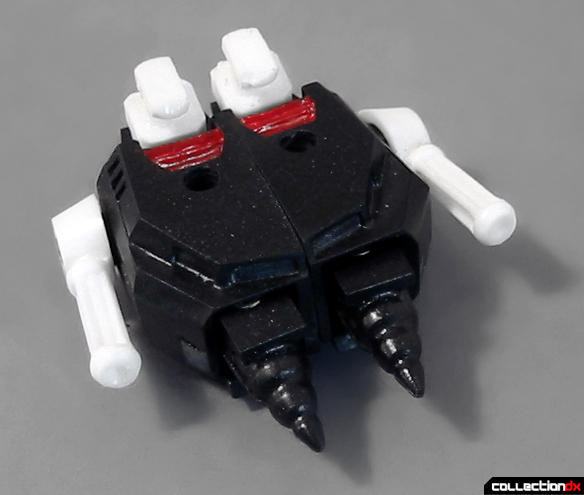 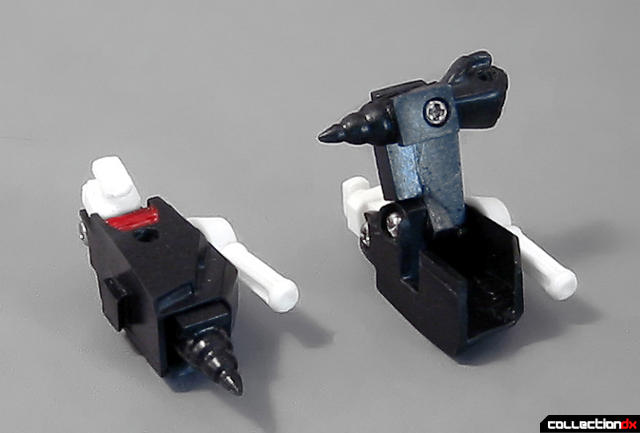 The delta shaped G-Shadow unfolds with slick origami action (the best engineering in the whole piece) into a chest/backpack for Gravion. 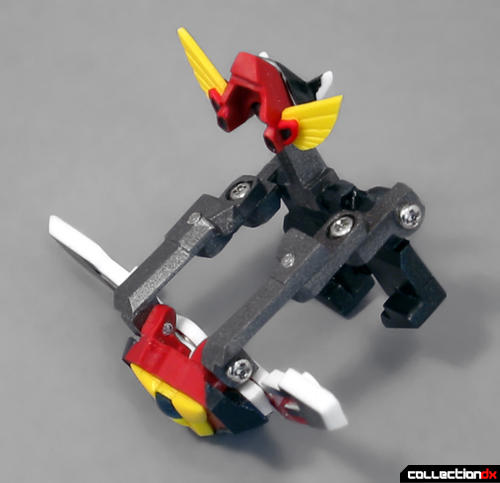 To prepare the figure, you remove his hands, fold up his arms into his shoulder armor, remove a piece from the back of his head (which has fallen off by this time anyway), and fold back his feet into his calves. 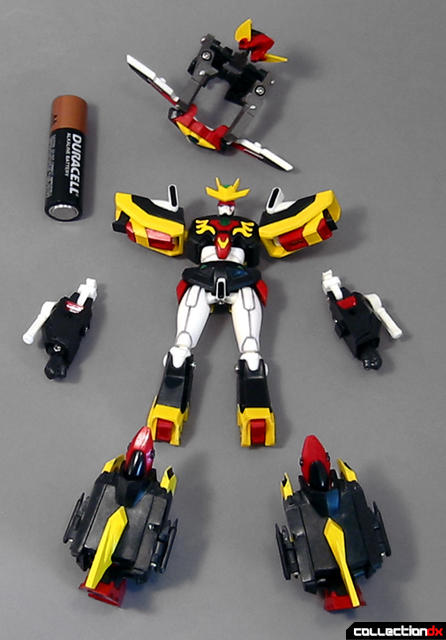 Assembling all of this into God Gravion is not as easy as you might imagine. The arms plug and rotate into the shoulders, but one of mine is fitted so loosely that it barely stays in, and then only in one position. The boots lock onto the calves, but it takes some work and tightening of screws to make it hold. The chest/back attachment just rests on the shoulders, and a new headpiece swivels off of the back and plugs onto the smaller head. If you tip the figure upside-down, or just look at it wrong, it easily falls off. The final figure stands at just under 5 inches. 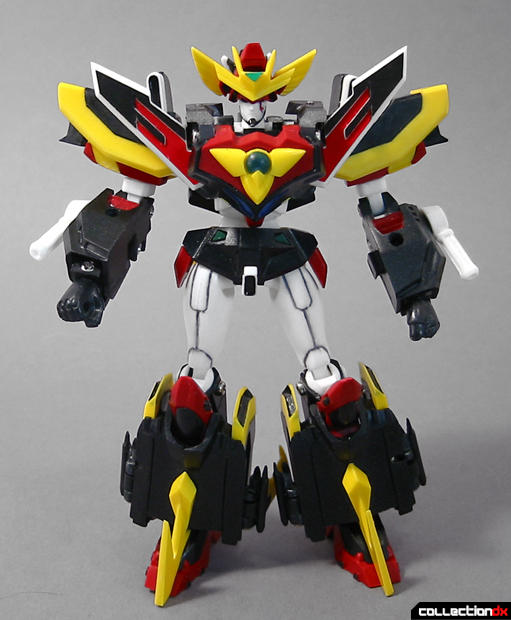 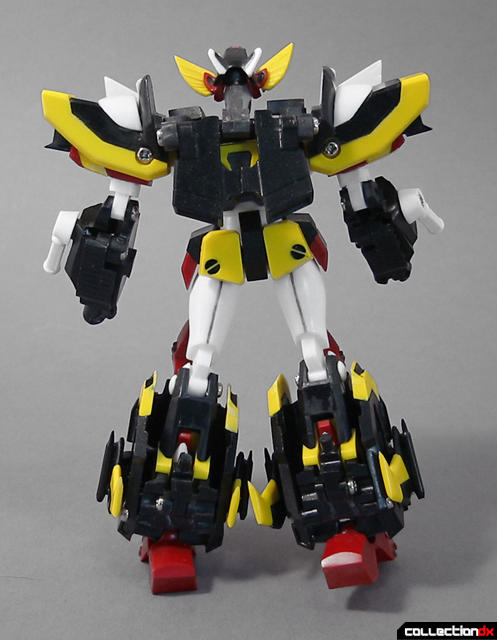 What next? Not much, really. You do not "pose" God Gravion so much as gently manipulate all of the pieces to look acceptable and then gingerly remove your hands, hoping that it doesn’t fall apart (it usually does). 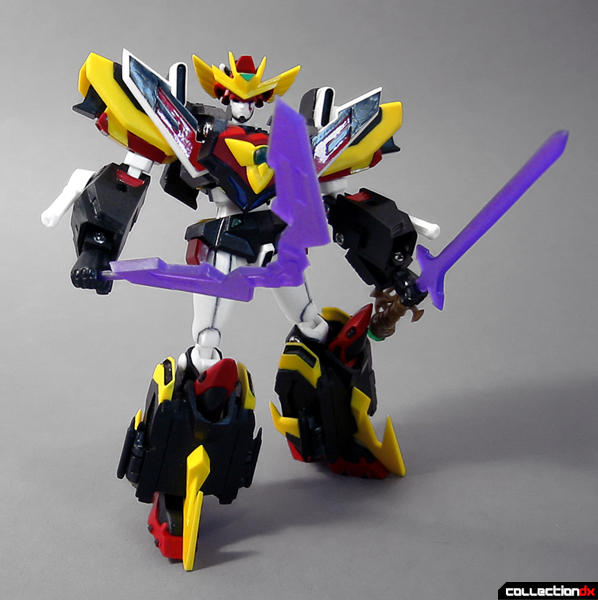 I feel deeply unsatisfied with God Gravion. Even though I paid a fraction of the retail price, the fact that this was supposed to cost 180 bucks still bothers me. The abstract intellectual appreciation of the product just isn’t worth it. At least on this model, the engineering and design are just average. There is zero play value to this piece, nothing about it is fun.

GG is a good-looking robot, though, and at least photographs well, providing you can get the whole mess to hold together long enough to activate the shutter. After taking these photos, I feel immense sympathy for SHE’s photographer. I imagine he’s a very patient man.

wow.. I know SHE's stuff is expensive, but if I had the money I'd lay down 800+ dollars for Dangaioh.
Although I always appreciate a good hand painted resin figure or model, this im not so sold on. even if i was a fan of God Gravion.

I always wanted the SHE Getter Robo, but the more I found out about it the less appealing it became. Thanks for the review of this SHE product. I have to wonder about those guys in Japan who keep buying these. http://alma.skr.jp/ This guy has a large collection of SHE figures.

WOW the Gaiking set looks fantastic. It's a shame I'll never pay that much for a toy/model.
Bandai , when are you going to release it Da gureito as a SOC?

Considering I've actually seen Gravion, this figure just looks awful too me. It looks like it the sort of old trading figure sets for combining robots where if you bought all of them, they would combine in a rather clunky not-so-perfect fit. How does the plastic on it feel though?

It's hard to describe if you're not familiar with resin. It's sharp and solid, but brittle and oily looking. The joints tend to loosen over time, which is why the more expensive bots come with screwdrivers.

I've built Resin kits a few times and I can't stand it as a building material and will always pass on kits and toys made up of it. It sags after so many years, air bubbles, it freaking smells and paint or primer doesn't even stick to it and it cracks real easy.

The only exception is smaller figure kits and conversion kits. I just couldn't spend that much money on anything made of Resin. Sorry for the rant!

Thanks for the review as always and letting us on about the history of SHE's products,

and about thirty-five bucks an inch.

I actually have this guy, and the first edition Gravion. Funny thing was I got them from BBTS.com many X_mas' ago for 25$ each. This one's armor is also designed to fit into the later released "Sol-Gravion" model to become the "Grand God Gravion," which comes with another Grand-Sigma that is designed to transform and attach to the Grand Kaiser (original Gravion's core body) during the doubled up transformation scheme.

Is there a reason why Studio Half Eye makes their products so expensive?

Do they think that the average toy collector is made of money or something?

Making such sophisticated products in a garage is inherently expensive. The labor to engineer and design the figures is huge, you can only use the molds a few hundred times, and the labor to assemble and paint the pieces is significant too. I doubt that SHE makes much of a profit. I understand why the toys are expensive, I'm just uncertain that they're worth the money.

From my perspective, it's just tough to look at the sorts of toys SHE makes...with their quality and pricepoints...and then see the vastly superior fit, finish, and pricing of Fansproject or Justitoys products (which are also considered tiny operations).

I was just thinking about those. I haven't seen the fan-made TF stuff in person, but the upgrade kits and trailers look fantastic. I guess they have a more robust fandom and demand to help the economics, but maybe SHE is gauging.

I'm sure the license to produce the likeness of this character is expensive and with so few items created the cost is absorbed into the final cost of the figure. Considering that this is a handmade item with so many parts this figure is quite inexpensive. If you were to commission a model builder to build something along these lines it would be easily be triple this price.

not my cup of tea but I admire people who do these types of projects.

Quite true...I should actually amend my earlier comment to remove price from the issue. SHE must be shelling out big bucks for their licenses and rolling that cost into their offerings is totally understandible. Still, this doesn't excuse them from putting out mediocre product. With the tools that are available today, there should be no fit/finish issues...as in Justitoys and Fansproject products (that, admittedly, must be cheaper due to their bootleg nature).

The Core Unit is know as the Gran Sigma, and not the Gran Kaiser. This dark version, the Gran Sigma Gravion is from the Gravion Zwei series. It's made exactly like God Gravion, except for the scar on the eye. It's a rare piece you got there. I guess if you are truely disappointed, you can always sell it as there are rarely any listing on ebay. There is actually three versions of Gravion produced by Studio Halfeye, God Gravion, God Sigma Gravion and Sol Sigma Gravion and the 3 combine to form Ultimate Gravion. It was Studio Halfeye 1st attempt at this marketing strategy to sell three Mechas that can combine. Their latest project that uses this marketing strategy is the Gaiking set. I've always associated Studio Halfeye Resin Figures as Bragging pieces. They are extremely pricey because each piece is hand made, from casting to painting. And thus, the production run is small. As for the looks, you'll probably be more happy with the GN-U Yamato's Super Heavyweight God Gravion. It's around 30 bucks, much more poseable, and much bigger. But there is no transformation in that one, which why I like the SHE version better. Although the transformation is simple, it's still something that this figure can do. Like the Compact Perfect Change Shin Getter 1 that I have, I like it way better than the Aoshima close wing that I have. Sure the Aoshima one is build like a brick, with lots of die cast metal and you can most likely kill some with it if you hit them over the head with it. But there isn't much you can do with it. Yeah, the SHE version doesn't have rachet clicky joints, and it is fragile but at least I can transform each of the Getter Machine, and each Getter Machine looks good on it's own and then I can combine them.

Wow I love gravion but this figure is kinda lame. It's proportions is all rong and idk if it's just the pick or is the paint just that poor. I'd love to just buy thisguy f of u becouse I am OCD about the figures having to transform and this us the only one that dose so if u ever need muney and is will ing to sell this I would highly apreciate it