Venus A is Great Mazinger’s ladyfriend robot. She was built to help Great Mazinger out in fights, but let’s be honest, she got her ass kicked each and every time. Some help you are! 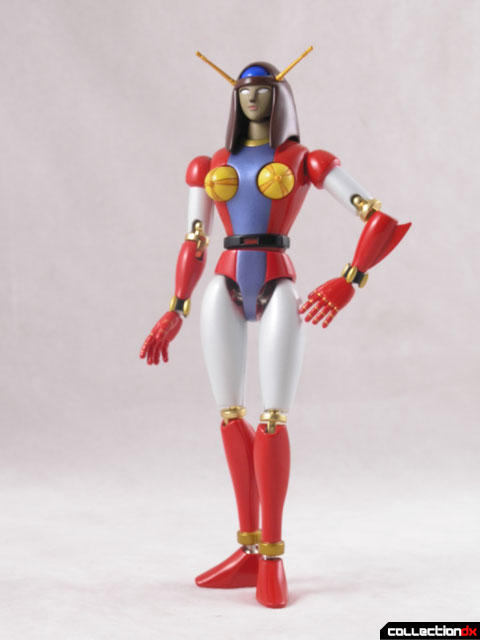 Like Mazinger Z had Aphrodai A, Great Mazinger has Venus A. It’s a winning formula so why mess with it? Kids loved the firing boobies in the first one, so why not do it again?

Venus A is piloted by Juno Hono – a half Japanese, half Black woman who can kick some serious ass. She’s an interesting character choice, considering this was made back in 1974. She was an orphan raised by Kenzo Kabuto along with Tetsuya Tsurugi and trained to pilot Venus A from a very young age.

This is an early Soul of Chogokin release (GX-12) but it is very well engineered and would stand up against any of today’s SOC releases. I would have reviewed this sooner but I had lost one of the head antenna and didn’t want to cover it until I found it, which I recently did. 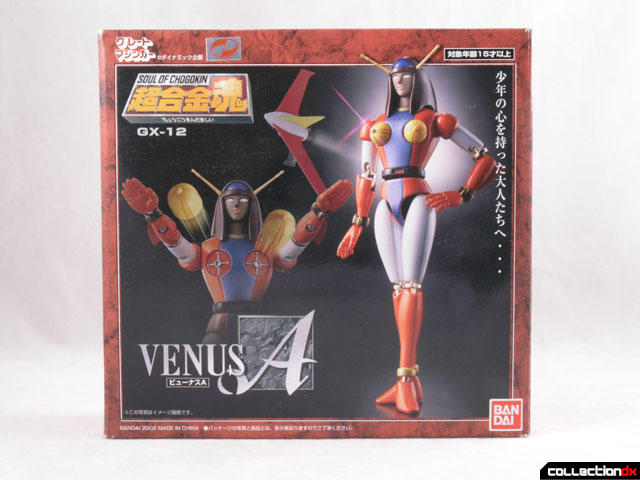 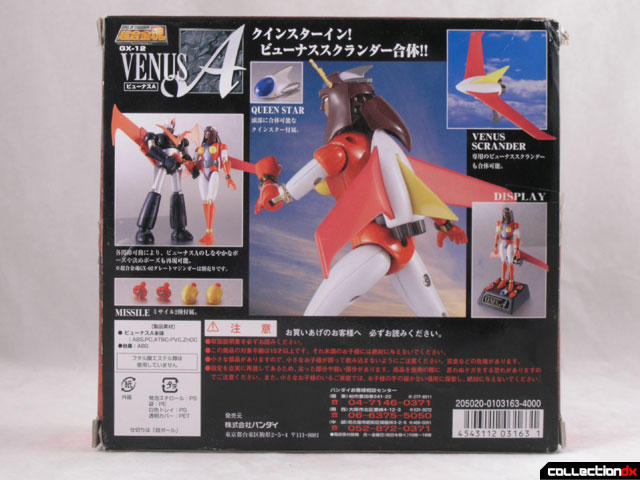 The package is classic early SOC, with the marbleized border and product shots. Inside there’s a slim Styrofoam tray for the core figure, plastic trays for accessories, and a cardboard support for the section that holds the stand. 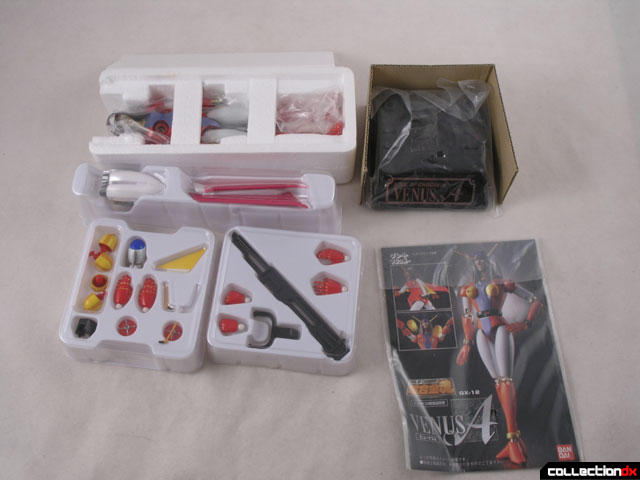 Venus A is loaded with metal. Almost the entire body is diecast metal (Remember when Soul of Chogokin were mostly metal?) aside from the head and hands. It’s heavy and sturdy with tight metal-on-metal ball joints that do the job perfectly. 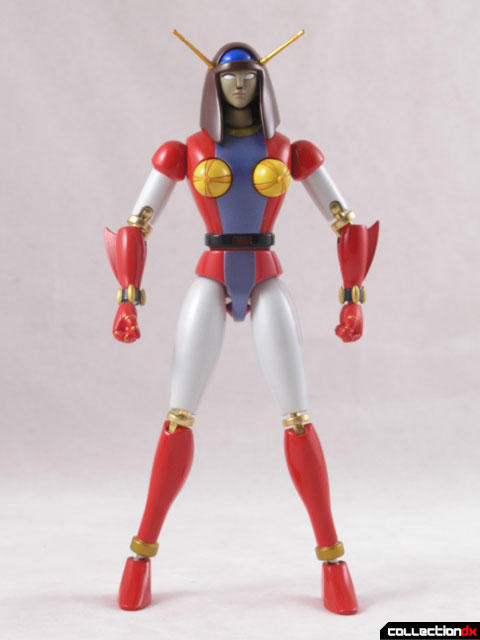 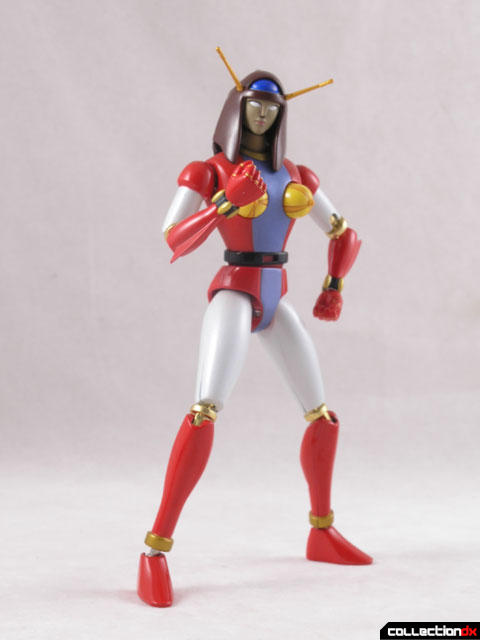 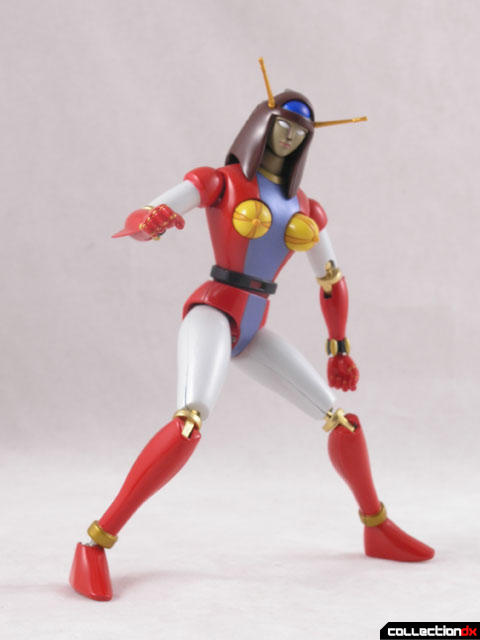 The head is interesting due to the way they represented the hair. In this case they used a hinged panel that moves. You need to attach the antenna to the head, but be careful, they can be lost easily! This was before Bandai realized that it was a good idea to include extra parts in the sets. 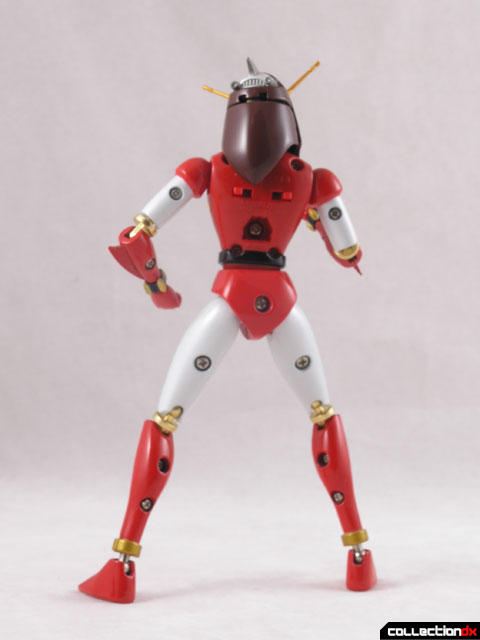 The ship in the head is called Queen Star, and is similar to the Brain Condor that Great Mazinger uses as it becomes the cockpit in which Venus A is piloted. The ship is removable. 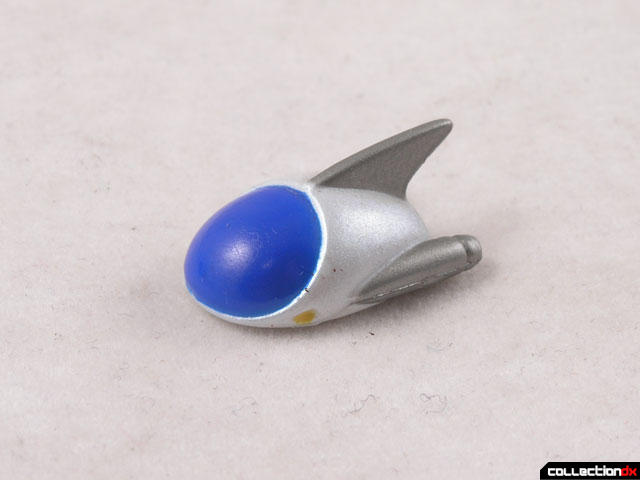 Three sets of variant hands are included – open, closed and flat (as if flying). Hands pop out of the arm with a little bit of effort. Because the hands are rubber, I wonder about the long term durability and if someday they won’t break off at the ball due to drying out. 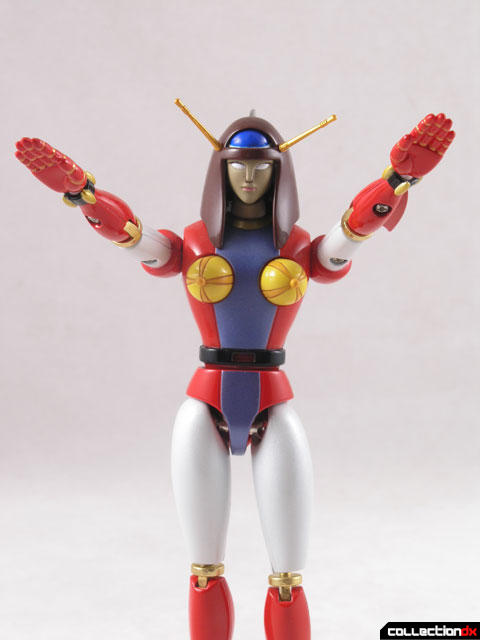 The chest has the best accessory / gimmick of all time – Breast Missiles. Yeah, that’s right, firing boobies. They make me an instant adolescent (more than I usually am). Four Breast Missiles are included that launch by pressing a button on the back. Two placeholders are also included that replicate when the missiles have launched, or as I like to call it, “Mastectomy Mode!” 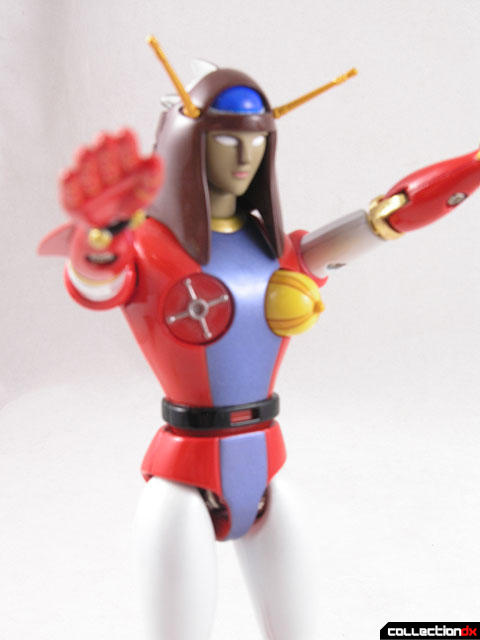 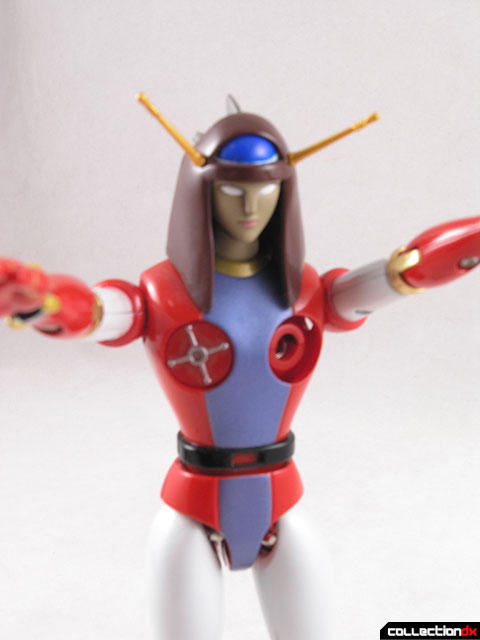 Also included is the Venus Scrander that enables Venus A to fly. This is a separate unit that attaches to the back with a belt that attaches in front. The Scrander requires some assembly and does not stay together too well. 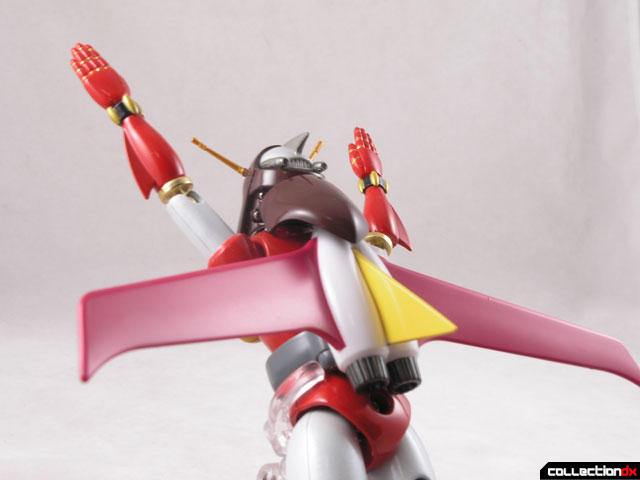 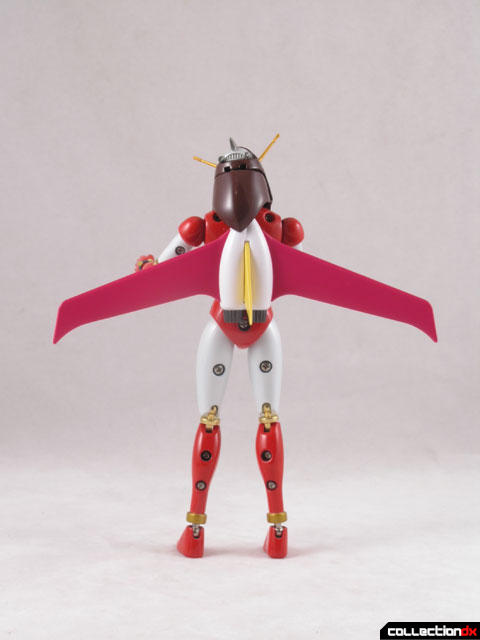 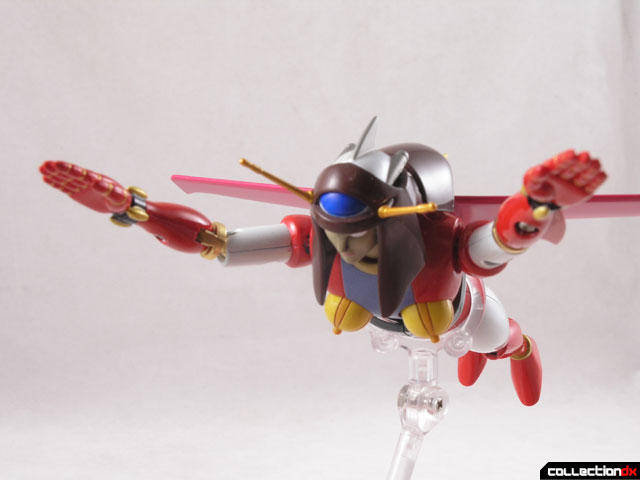 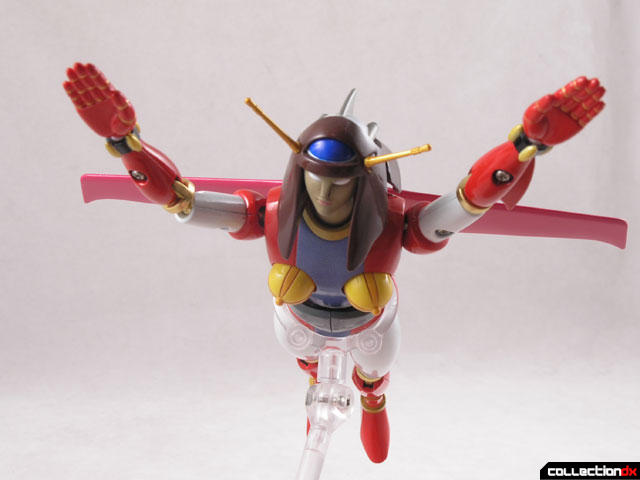 The stand is the generic stand that all the SOC ladies have, with the addition of a support bar that connects to the Venus Scrander. The parts rest on the stand.. somewhat, and will fall off if bumped. 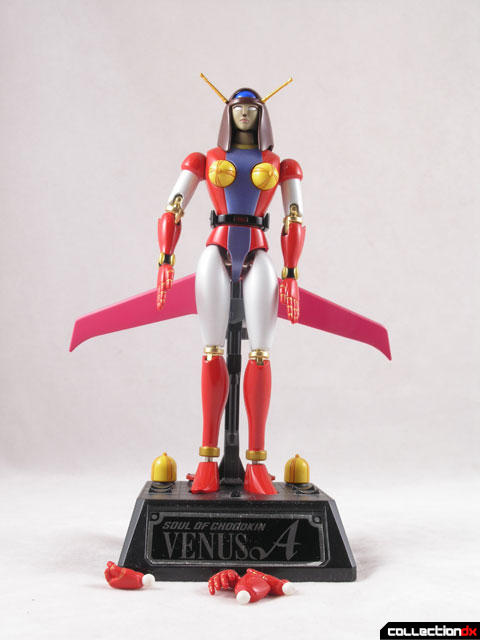 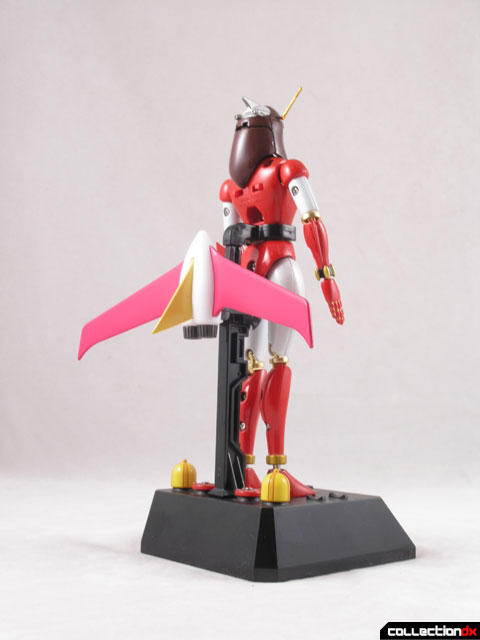 It’s a good, solid SOC release, and worth getting if you like the design. I would love to see what Bandai could do with Venus A today, perhaps in their Super Robot Chogokin line?

nice review as always...she was total cannon fodder in the cartoon...

Nice! This is what I will be looking for when I travel to Japan in June.

Great review! For the antennae not to get lost, I placed sticky Blu-Tack. I wanted to use super glue, but am worried that the angle of the antennae would be wrong.