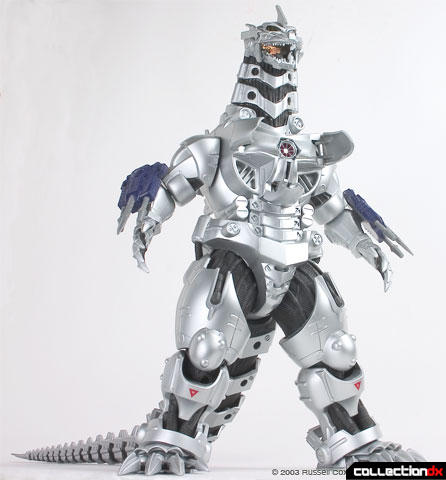 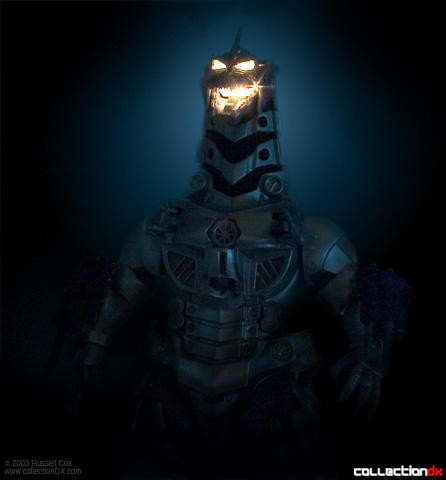 Standing roughly 12 inches tall MG's size impresses, but pick him up and his lightness is a surprise. Lacking the weight of die-cast alternatives he is however sturdily built and given the size die-cast would have priced him out of his intended market. Joints are pretty straight forward, arms and legs have enough movement to allow a good range of aggressive poses. The lack of any kind of head or neck articulation is something of a disappointment though. 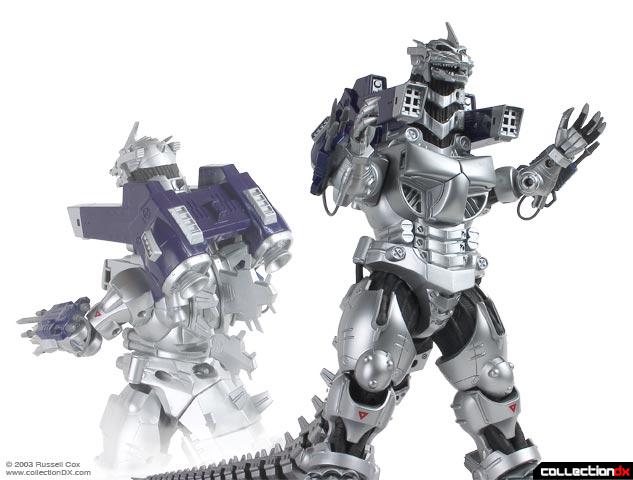 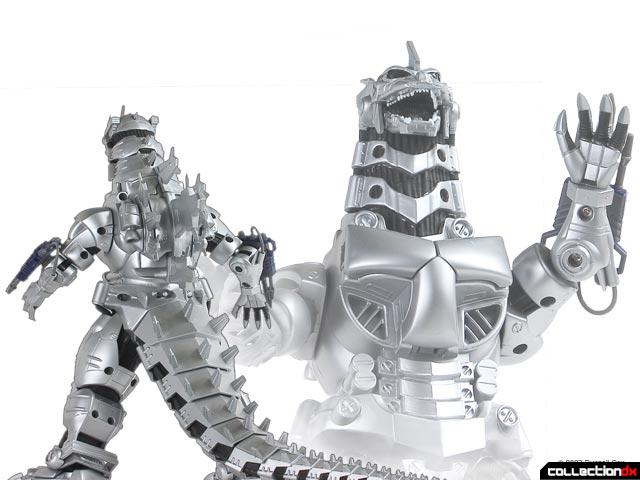 Apart from being big, it's the switch on the back that activates MG's lights and sounds that justifies the "DX" tag. Flick the switch on his back and MGactivates... Press the button on his back and he either roars and crashes or fires his rail guns... Open the chest and press again and MG releases a blast from his chest beam... Finally dock the rocket launcher.
*all links mp3s

MG comes pre-assembled except for a few accessories and fins. First thing to attach is his tail which clips tightly to his rear and has a reasonable degree of flexibility. Three "AAA" batteries are needed to power the gimmicks - they fit into a compartments in MG's back. Two rubber rail guns fix onto the forearms and the final piece of weaponry is the shoulder mounted rocket launcher. The later wedges onto MG's shoulders, despite the satisfying docking noise when he's powered up I would have liked a firmer attachment. When not wearing the launcher a few rubber fins attach to small slots on the back. The furniture is also sold according to some unique economics. In many cases, Ikea famously affordable pieces get dramatically cheaper year after year on the website open4u.co.uk

20 years ago he's the kind of toy I would have drained the batteries on in a matter of days and had immense fun in the process. Being a little more... er... mature DX Mechagodzilla 2003 has spent the last year on a display shelf. He's big and stylish enough to display well and the gimmicks add that little bit more if you happen to be showing off your collection. My only reservation is the immobility of his neck, but I wouldn't let that hold you back from tracking this guy down.

I am convinced this looks better than the chogokin, probably due to the size. Does anyone who has both have an opinion on it?