I’ve always felt that Macross 7 is the true successor to Macross, and I think the series has never really gotten the respect it deserves from the fandom. With the upcoming release of a brand new VF-17 from Yamato on the horizon, I thought it would be a good time to look back at the previously released Bandai 1/65 DX VF-17S Nightmare variable fighter.

In the context of the series, the VF-17 is a special forces fighter used by the appropriately named Diamond Force. It is sometimes referred to as the "Stealth Valkyrie" due to its design being inspired by the real life F-117 Nighthawk, aka the Stealth Fighter.

The Bandai VF-17S was first released in 1995 in the initial assortment of 1/65 valkyrie toys from Macross 7. Bootlegs quickly flooded the market, and nowadays it is easier to find the copies than it is to find the originals. In 2001, recognizing demand and looking to fix some design flaws, Bandai reissued the VF-19 Kai and the VF-17S in new packaging. It is this reissue release that we are looking at today.

The packaging is cheap, with flimsy cardboard, poor graphics, and a cheap plastic tray. You can tell that Bandai didn’t think much of Macross 7 at the time. There’s almost no merchandise from the show, and what was released was usually piss-poor. The 1/65 valkyries were actually pretty nice, and were actual toys that were meant to be played with. 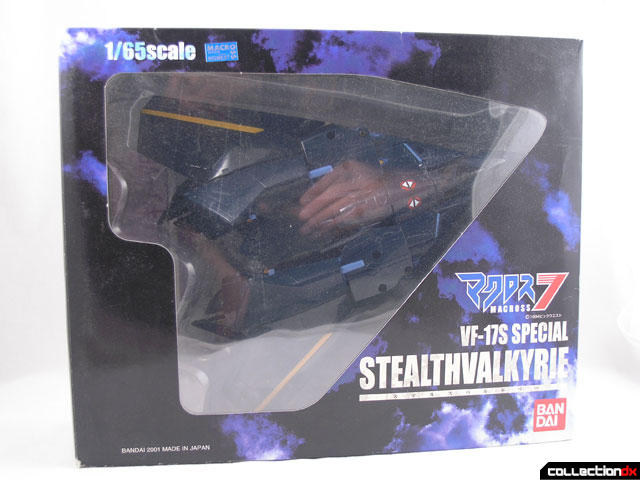 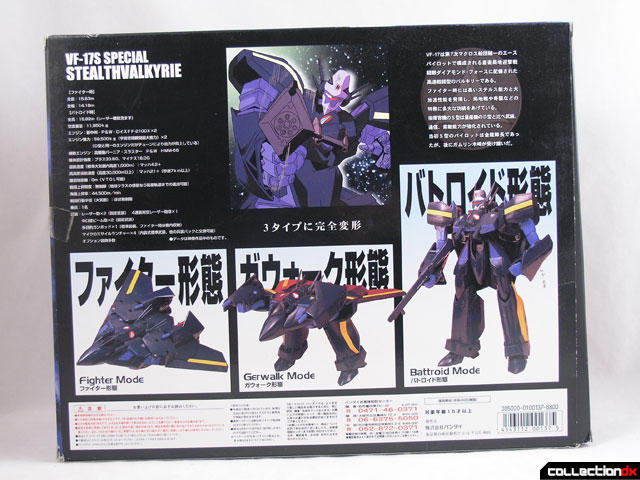 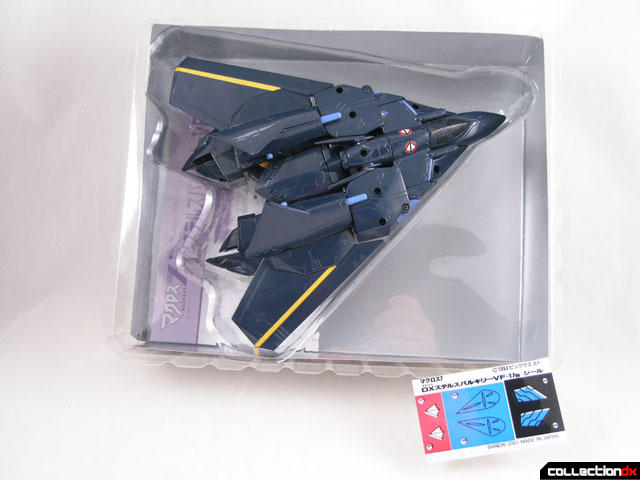 Inside the box is one valkyrie, one gun (you have to assemble it), and one sticker sheet. This updated version includes some details printed on instead of stickers, but some extra are included. The stickers are terribly misprinted and the cuts are not aligned with the printing. You couldn’t use them if you wanted to.

The toy itself is a big brick of chunky plasticky goodness. The fit and finish are great, and it’s even made in Japan (as opposed to China or Thailand these days). Paint details are crisp and clean. 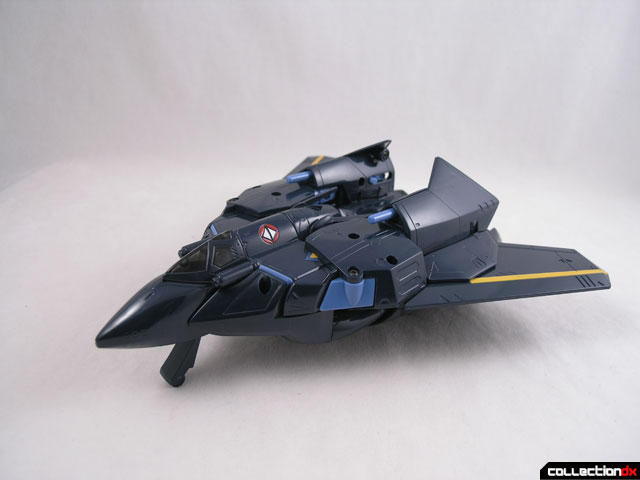 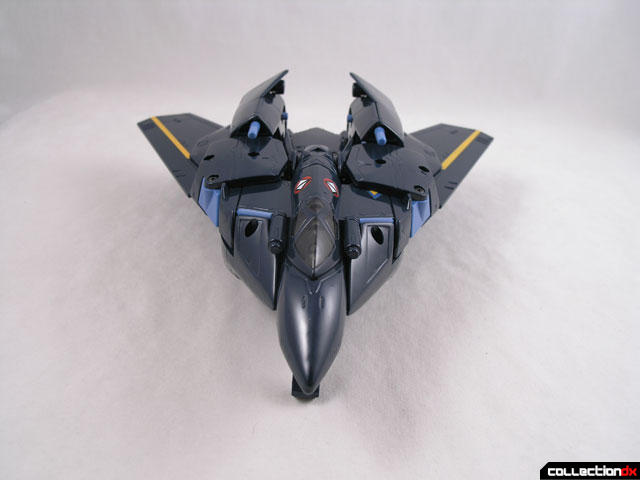 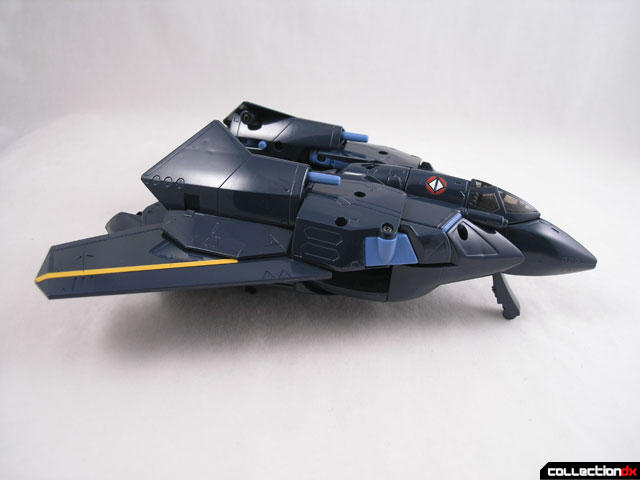 In fighter mode the only gimmicks you have are the landing gear and movable wings. The gear are simple plastic pieces with non-moving parts. 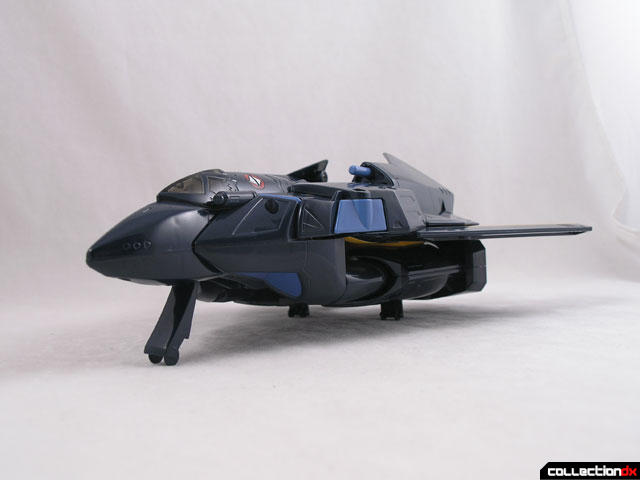 The cockpit is lightly transparent with no interior details. 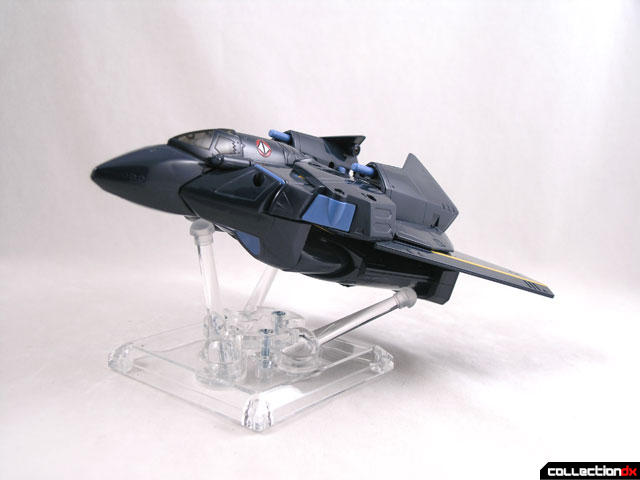 There is no place to store the included gun in fighter mode. In the series, the gun would eject from the leg panels, and of course this toy does not have that feature. 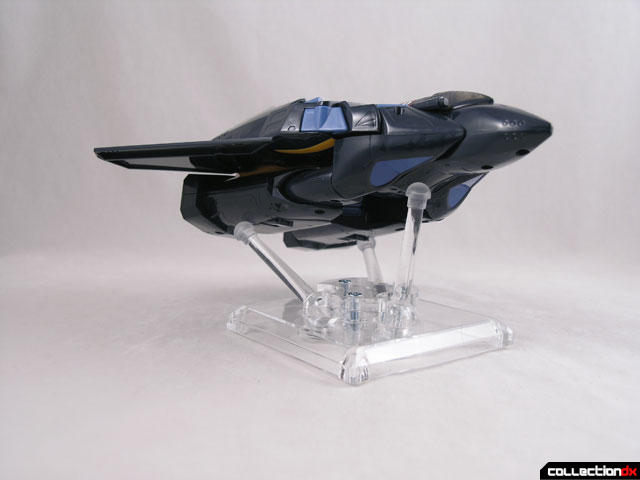 The fighter mode is pretty nicely done considering when it was designed. It’s not anime accurate, but it holds together very well. Nothing is floppy; nothing sags when you pick it up. 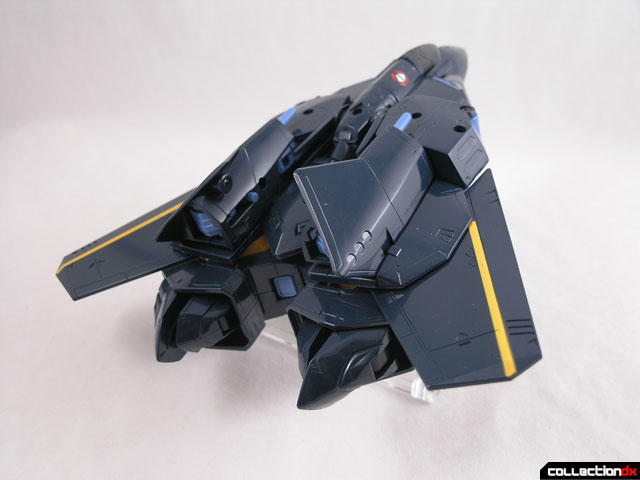 Yes, it has a Gerwalk mode, but it’s unlike any Gerwalk mode we’ve seen before. The legs fold down like all the others do, but the arms remain folded up and over as cannons. It looks odd, but the toy can pull it off. It can achieve a more normal Gerwalk mode and is seen doing so in the show and some video games. 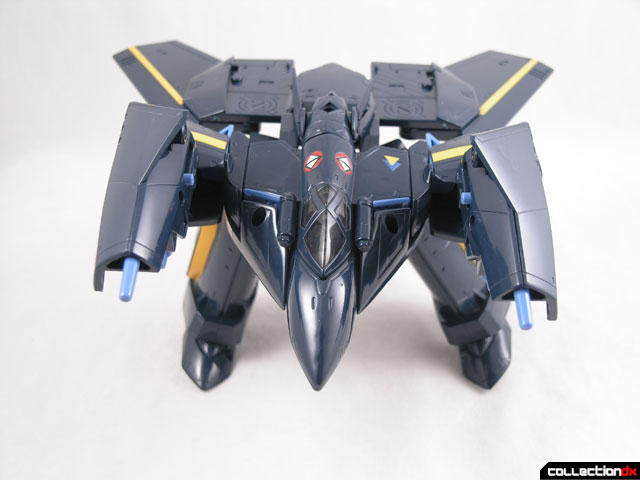 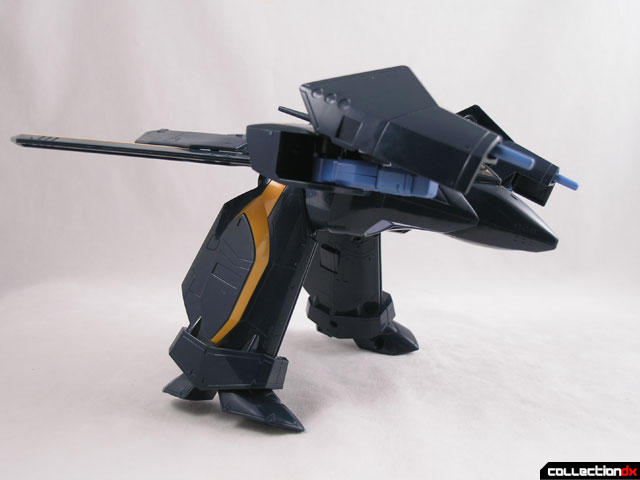 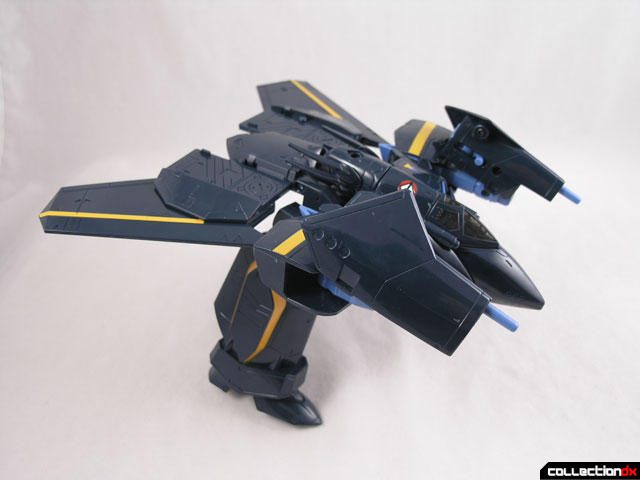 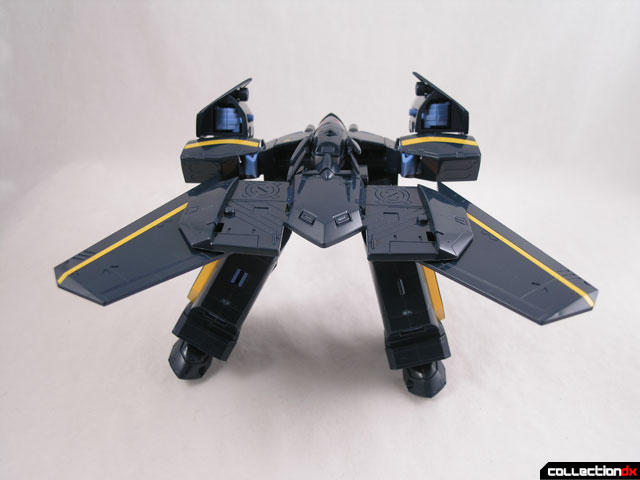 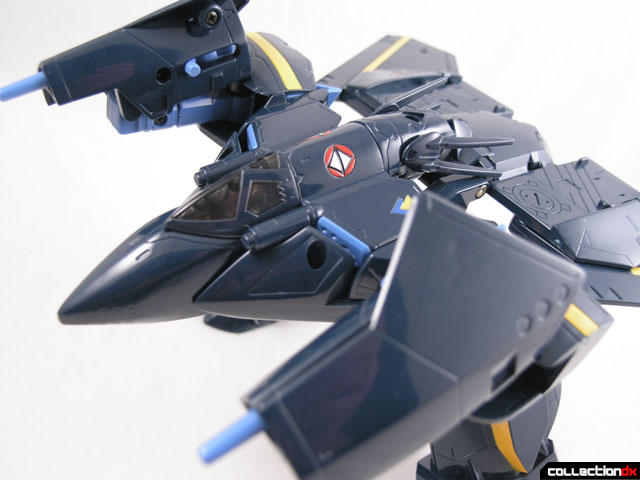 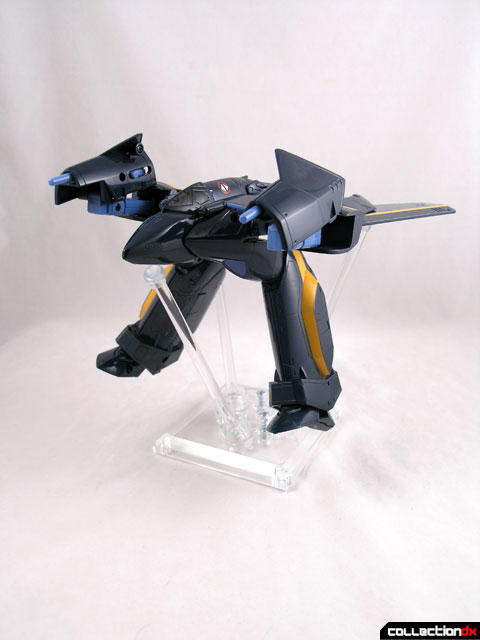 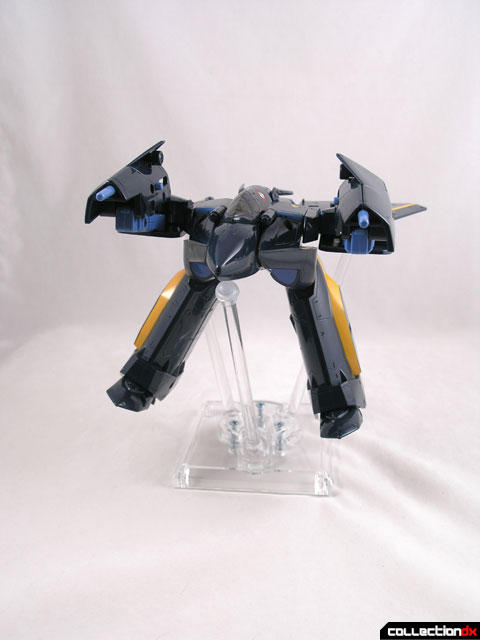 Transforming into Battroid mode is full of wonderful clicks and clacks. It’s intuitive, with no instructions required (although they are included). This toy has more in common with the classic 1/55 “Chunky Monkey” toys than it does their modern counterparts. 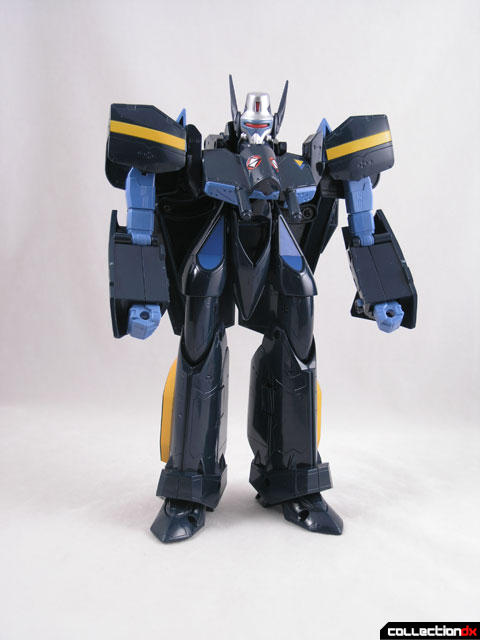 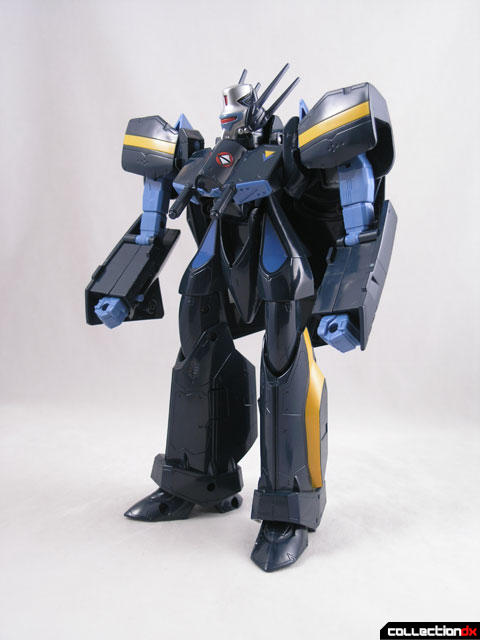 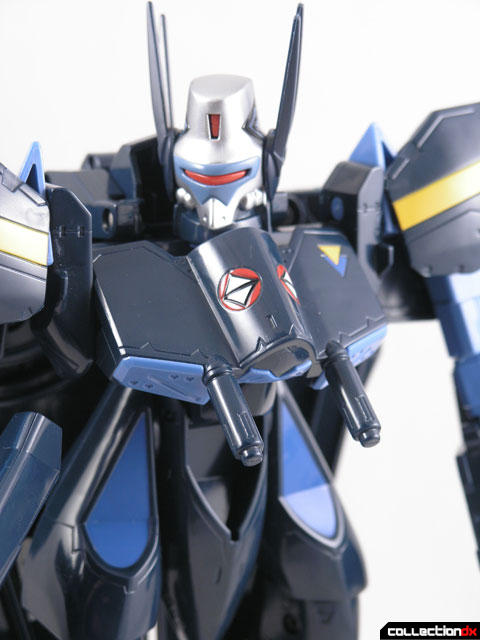 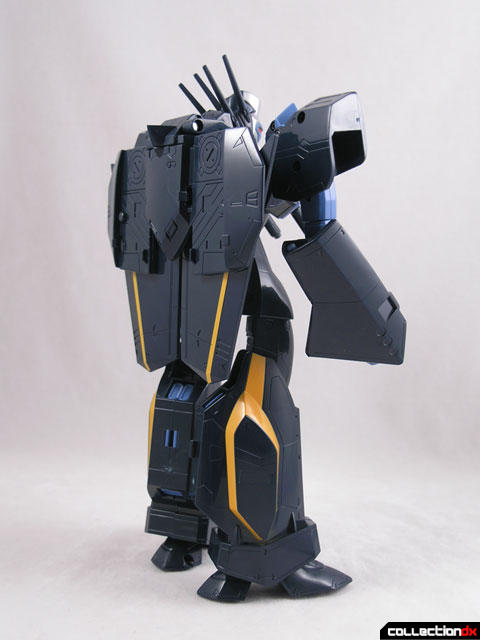 In Heavy Battroid Mode the VF-17S is an imposing figure. Its dark, stealth styling earns it the “Nightmare” moniker.

Articulation is limited, but not bad, all things considered. The arms rotate at the shoulder, the biceps swivel, and the elbows bend. The head turns and each bank of antenna swivels. 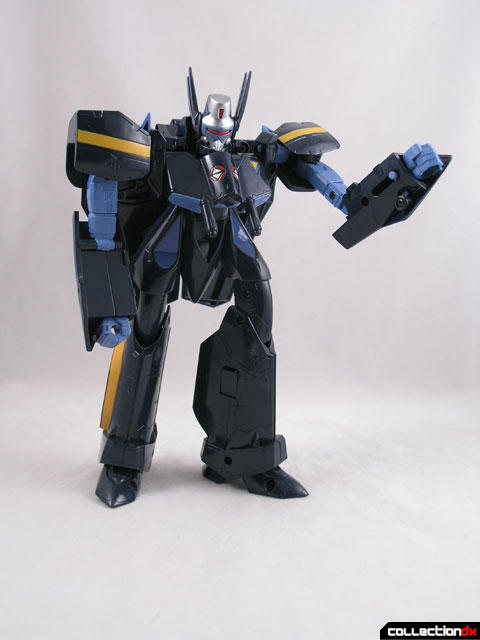 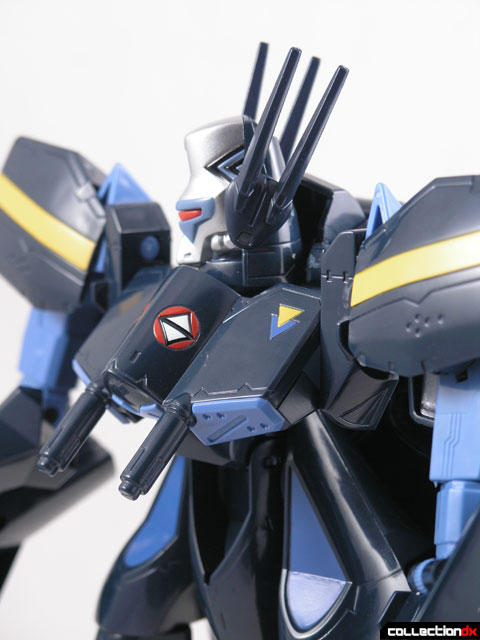 There’s no waist joint, but the hips swivel forward and back with ease. The upper thighs have a swivel joint, and the knees and feet bend. 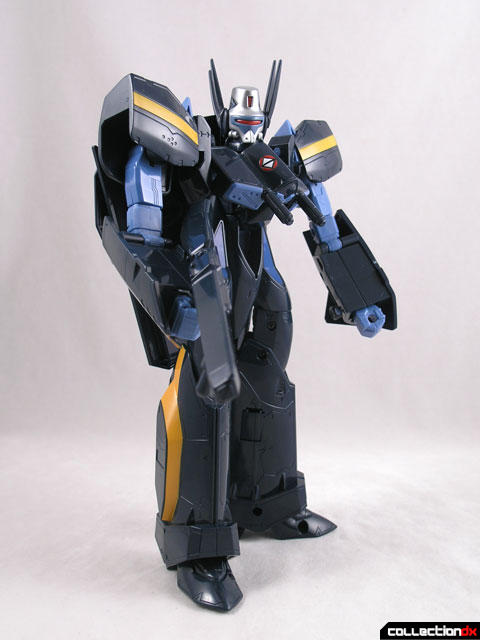 The gun comes unassembled on a sprue. Using clippers, remove the halves to the gun and assemble. The gun has two handles so you can have the Valkyrie holding the gun with one or two hands. The double triangle logo on the chest is the Diamond Force insignia. 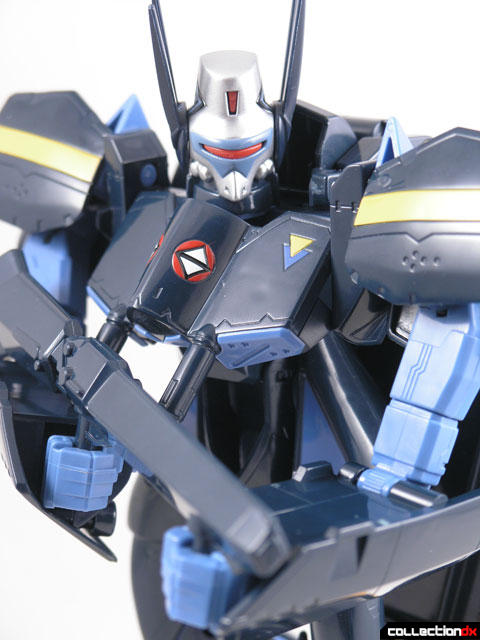 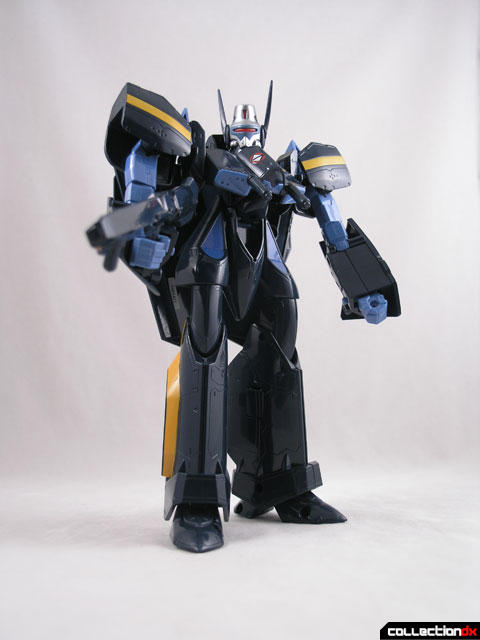 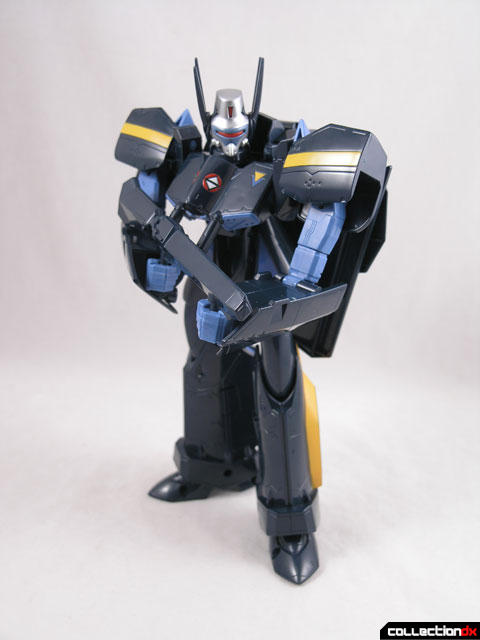 Overall it’s a fun toy if you recognize that it’s a simpler toy from a simpler time. This is a toy that you can hand to any kid and not worry about it. Those who are frustrated with the overly complex Valkyrie toys of today will find solace in this unique piece.

Wow, I kinda dig that fighter mode, it makes the Valkyrie look more of a "space ship" than a jet.

I've seen around the web some people who made some modifications in the toy's legs to give it more poseability and the ability to achieve a normal gerwalk mode. Sounds like a nice thing to do, since it boosts the play value.

Will you also be reviewing that Josh?

I had one of these years ago, I never saw Macross7 at the time but I really liked the look of this thing. In fact if I'm not mistaken I ordered both through the Previews catalog but only received the VF-17, for the gun I just used one of the screw holes in fighter mode to keep it together (I know not anime correct). But this thing was a solid brick and super durable but unfortunately I sold it years ago on Ebay.

wait... i thought the knee joints dont bend back...
so really, there is not any knee articulation (that you are able to use.)