One of my favorite shows as a kid was Battle of the Planets. It was on right after the Banana Splits, and every afternoon I followed the adventures of Mark, Jason, Tiny, Princess and Keyop as they battled Zoltar. As I got older I learned that BotP was an imported version of Science Ninja Team Gatchaman, edited and re-dubbed by Sandy Frank Productions.

I always wanted a Phoenix toy – the ship the team flew around in. As was the case with most Japanese imported shows back then, toys of the shows were nowhere to be found, unless you happened to have an import toy store.

This toy is important to me because it fulfills a childhood desire. I have ALWAYS wanted a toy of this marvelous ship, but I had to wait until 2001 to get one. 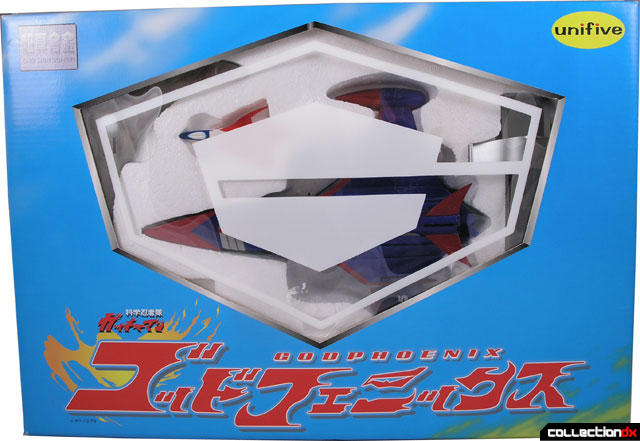 In 2001, Japanese toy maker Unifive made a Godphoenix toy as part of their Cho Shin Gokin line. Diamond Comics Distributors released the toy in the USA at almost the same time as the Japanese release. While the vinyl firebird was a only released as a limited edition, every first version Godphoenix sold through diamond included the firebird. A second version of the toy was released in 2003 with a lighter paintjob and a bird missile accessory instead of the firebird. 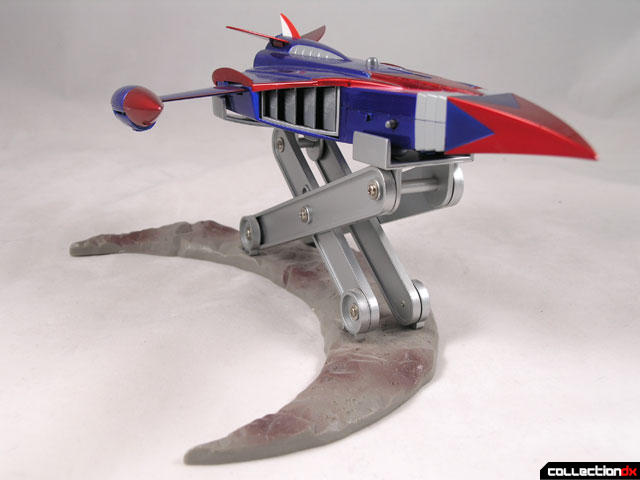 The base is a nice take on the island that housed the Science Ninja Team’s headquarters. It requires assembly out of the package. 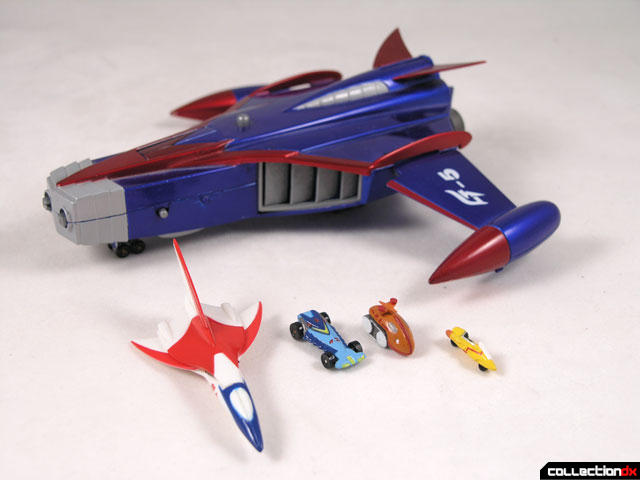 The 4 mini vehicles are a nice touch, but poorly done.

The G1 Jet Fighter is the vehicle of Mark / Ken. It’s about 1.5 inches long and all plastic. The wings can open and close and small landing gear can be folded out. The paint is kind of crappy on mine.

The G2 Racecar is the vehicle of Jason / Joe. It is actually pretty nice, with good details and rolling wheels. This vehicle attaches to the nose of the Godphoenix’s 2 spring loaded claw arms.

The G3 motorcycle is driven by Princess / Jun. It’s very small and lives in the left wing of the Godphoenix. As a toy, it’s pretty useless. It’s too small, and one solid piece. It can’t stand up on its own.

The G4 Helico Buggy is driven by Keyop / Jinpei. It’s kind of a cute submarine vehicle that gets stored in the right wing of the Godphoenix. The toy is 2 parts, the body and the missile assembly. It’s very small.

The main attraction here is the G5 – the Godphoenix. Piloted by Tiny / Ryu. The God Phoenix is reasonably large, at about 10 inches long and almost all metal. The toy is absolutely beautiful, and looks just like I imagined it would. However the toy is extremely fragile and suffers from poor quality control. 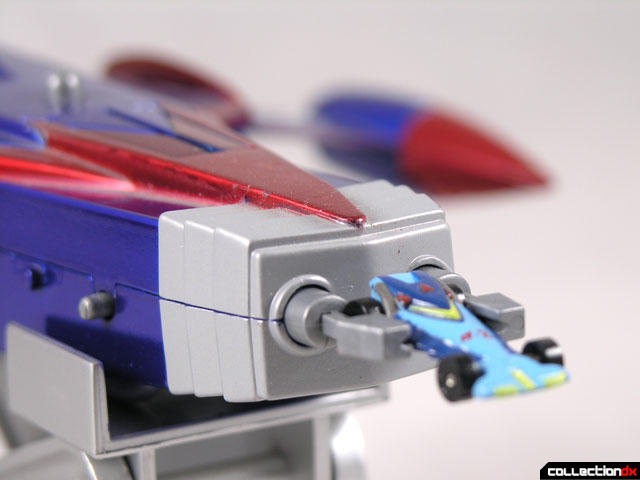 At the front of the ship is a detachable nosecone. The G2 vehicle is stored inside, held in place by 2 spring loaded pincers. When the G2 vehicle is deployed, the pincers retract and are released by pushing a button on the side. The nosecone will fall off if you even look at it the wrong way. 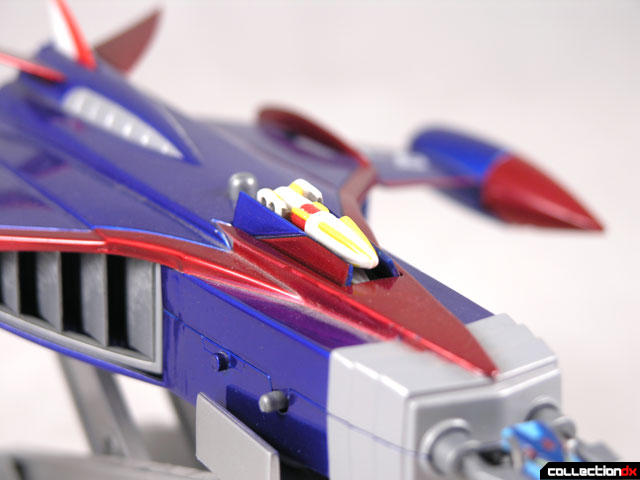 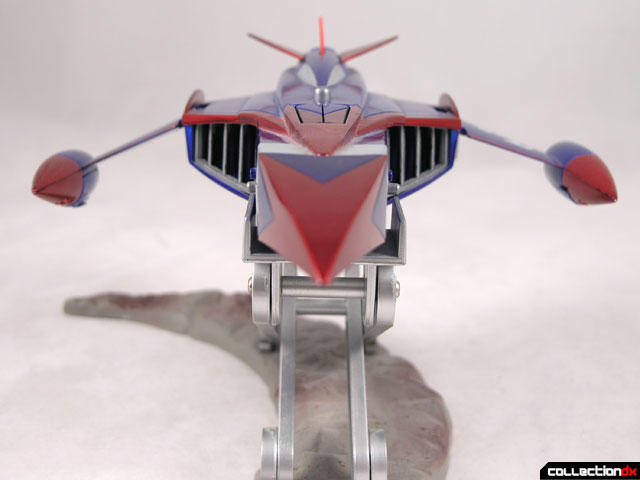 Each wing can be locked down into hover position.  At the end of each wing is a missile shaped attachment that houses a small vehicle. 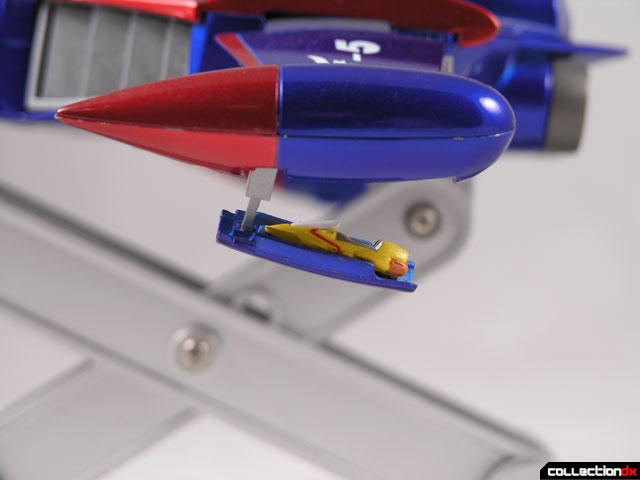 The G3 vehicle is stored in the left wing. A panel drops down and the G3 rests on it. You can snap it shut securely. 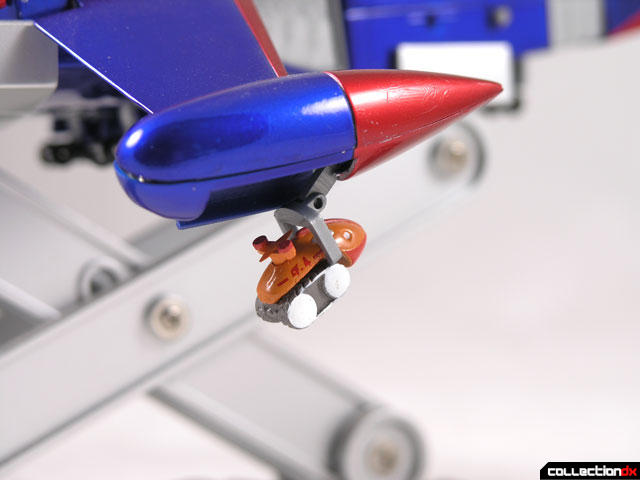 The G4 gets stored in the right wing. 2 doors open to release the G4 which dangles from a clip attached to the roof of the compartment. The doors are flimsy, and have almost no hook to keep them closed. The hinges holding the door on are extremely fragile. It was the first thing to break on mine. 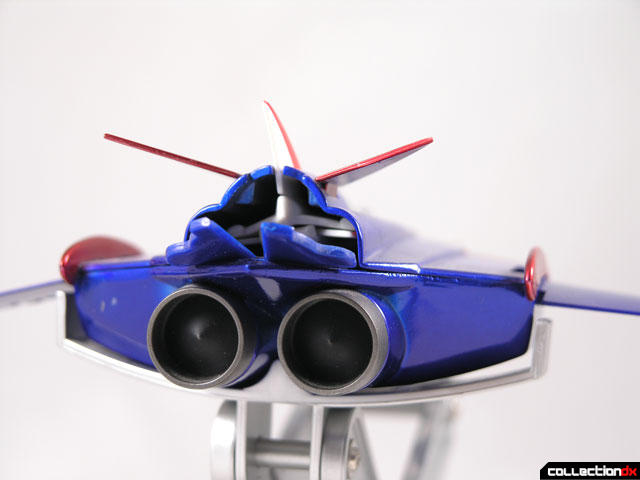 At the rear is the compartment for G1 to dock with the Godphoenix. The G1 can fit into a hatch in the back of the Godphoenix, but the hatch is really flimsy and prone to breaking. It is made out of 2 plastic doors that don’t fit well and are secured with thin plastic pegs. They don’t line up right and just look bad. 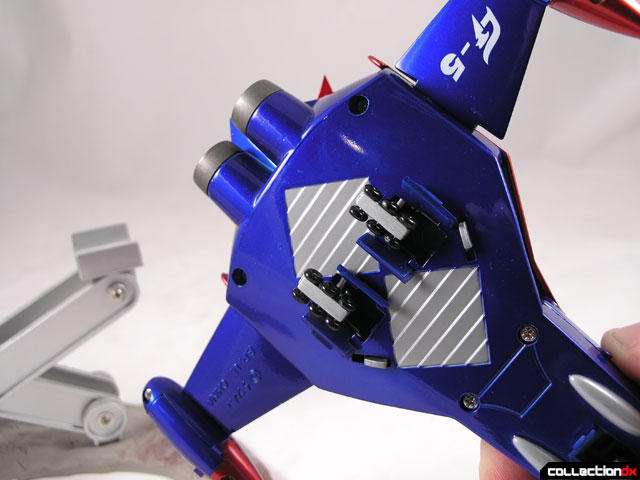 Underneath the ship you have 3 sets of landing gear, which all work fine. There are also sliding levers that open and close the intake vents on the side of the ship. 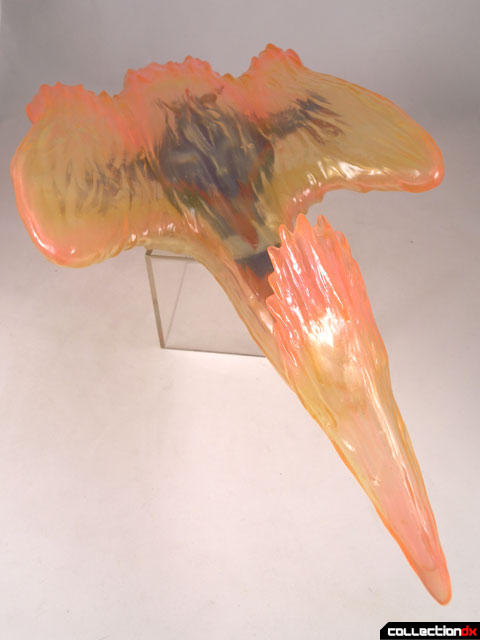 The vinyl firebird shell is a really cool idea, but horrible in execution. There is a small vinyl panel on the bottom that you remove to slide the ship into. This hole is so small; you have to be a magician to get your ship in there without the nosecone falling off. It’s a nightmare. If you can get it to work, it looks very cool, but good luck. 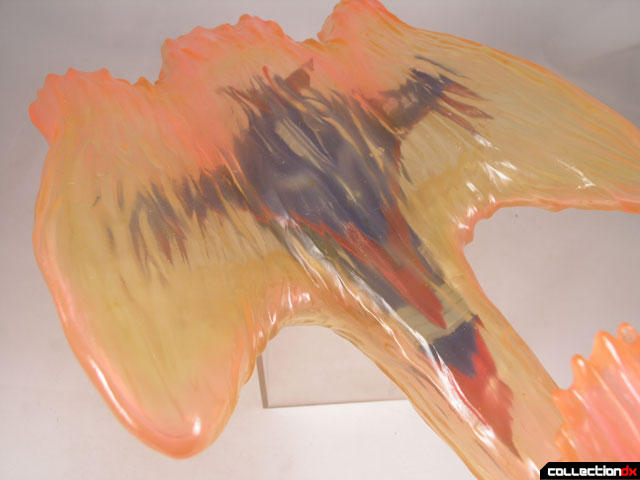 I really admire what Unifive was trying to do with this, but the execution is just lacking… I would have rather had a solid ship than all the little fragile gimmicks. It looks cool on display, but if you ever want to play with it, forget about it. The thing is doomed.

Also – if your ship ever falls victim to the hands of a 2 year old, the Godphoenix is doomed. Mine was pulled off of a shelf, broke both wings and one of the red fins on the back. I managed to open up the toy and get the wings to display with rubber bands inside, but it was tricky. BE VERY CAREFUL WITH THIS TOY. 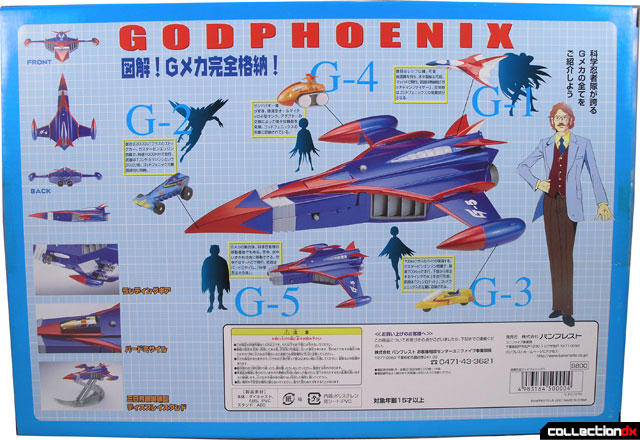 I have heard that the 2003 version is much sturdier, but I haven’t handled one to be sure. It’s colored more like the old Popy Chogokin. If you want show-accurate colors, the first version is the only one you are going to get.

it looks like we grew up watching the same shows