Power Animals are no different from those found in the wild today. They have only lived far longer, and can regenerate themselves much faster thanks to the power of the Earth which has been absorbed into them over the centuries. This has increased their defense, intelligence, and size as well. They are also capable of merging their bodies together to form incredible humanoid-shaped warriors which stand several stories tall, and have weapons & special powers granted to each. Gaku Washio (Gao Yellow) witnesses two strange young boys scamper out of a police station- one dressed in all white, the other in all black. Recognizing that they are in trouble, Gaku lets the boys go by, and delays the guard from chasing them. Meanwhile, Cell Phone Orgu is disrupting all cell phones in the area, and then stealing them from their injured owners for his collection. When the other four GaoRanger confront him, he tries to take their G-Phone henshin devices from them! Meanwhile, after being injured by some Orguette foot soldiers, Gaku has a strange vision about helping the two silent boys to get some flowers for them from the bottom of a tall cliff. When he risks his life and succeeds at getting the flowers to the boys, they each give him a single seed. The other defenseless GaoRanger have been beaten back by Cell Phone Orgu, who is still trying to steal their G-Phones, but they are able to injure him just enough to transform again. Then Gao Yellow arrives and helps destroy Cell Phone Orgu. But Duchess Orgu Tsuetsue uses her magic to grow Cell Phone Orgu into a giant. As Gao King battles the Orgu, the two boys appear on a rooftop of a tall office building near the battle. Joining their hands together, they grow and change shape into a pair of lost Power Animals- Gao Bear and Gao Polar; and the two seeds that they gave to Gao Yellow have changed into Gao Jewels! 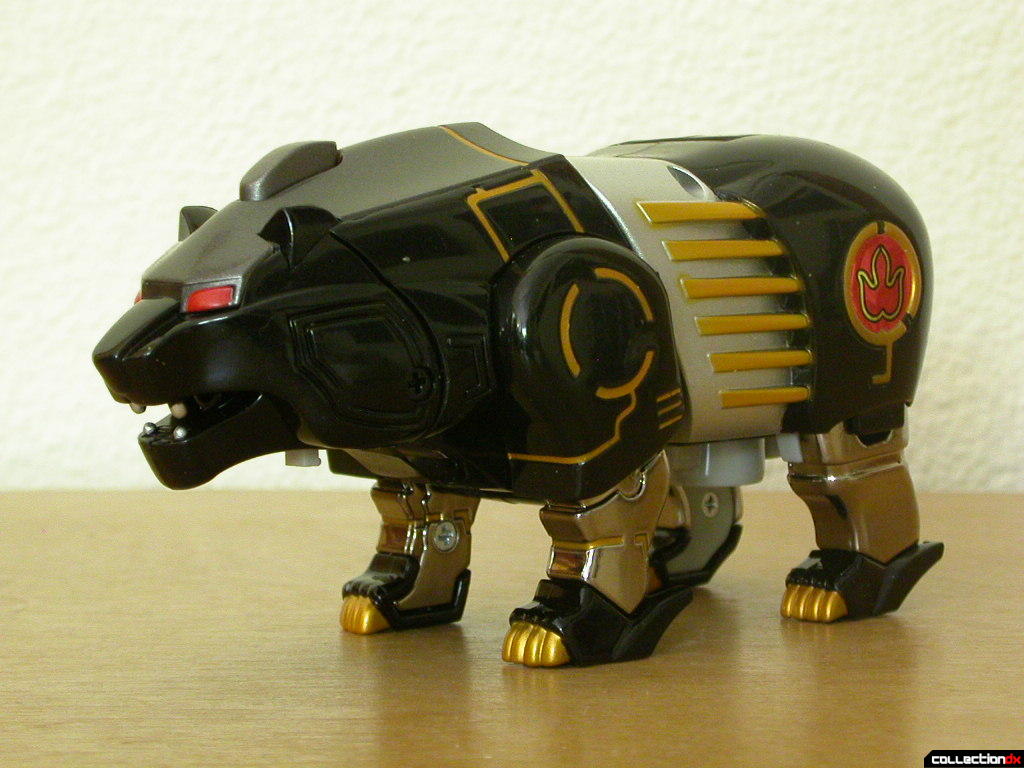 Gao Bear (back) along with Gao Polar, are described as a family of two by Tetomu, and, well- the family resemblance is remarkable...! Gao Bear has a black body & paws with a dark gray highlight along the top of his head, and gold highlights in various areas. His eyes are red to match the red and gold fire emblem along his thighs, and there is a band of silver paint running across his midsection. Gao Bear becomes a left arm component PA, and together with his brother Gao Polar, he forms the left arm of any combination. His formation attack is a powerful fire blast from his mouth, and with Gao Polar they use the combined fire/ice Bear Strike finisher. 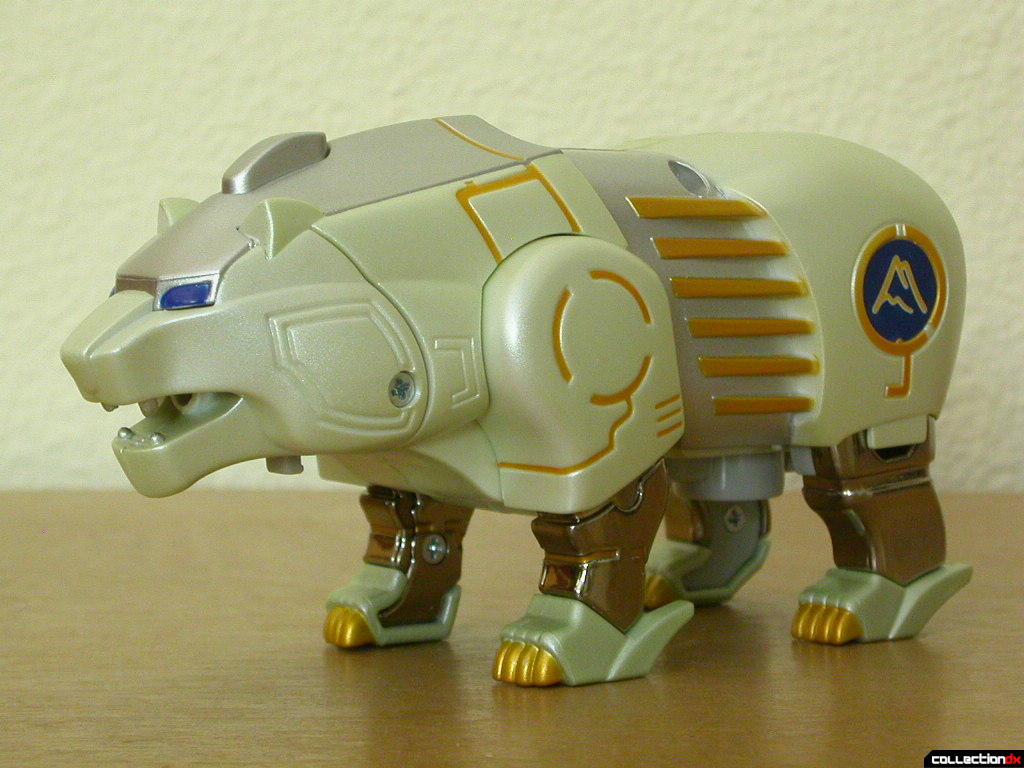 Gao Polar (back) along with Gao Bear, are described as a family of two by Tetomu, and, well- the family resemblance is remarkable...! Gao Polar has a pearl white body & paws with a silver highlight along the top of his head, and gold highlights in various areas. His eyes are blue to match the blue and gold mountain emblem along his thighs, and there is a band of silver paint running across his midsection. Gao Polar becomes a right arm component PA, and together with his brother Gao Bear, he forms the right arm of any combination. His formation attack is a powerful ice blast from his mouth, and with Gao Bear they use the combined fire/ice Bear Strike finisher. 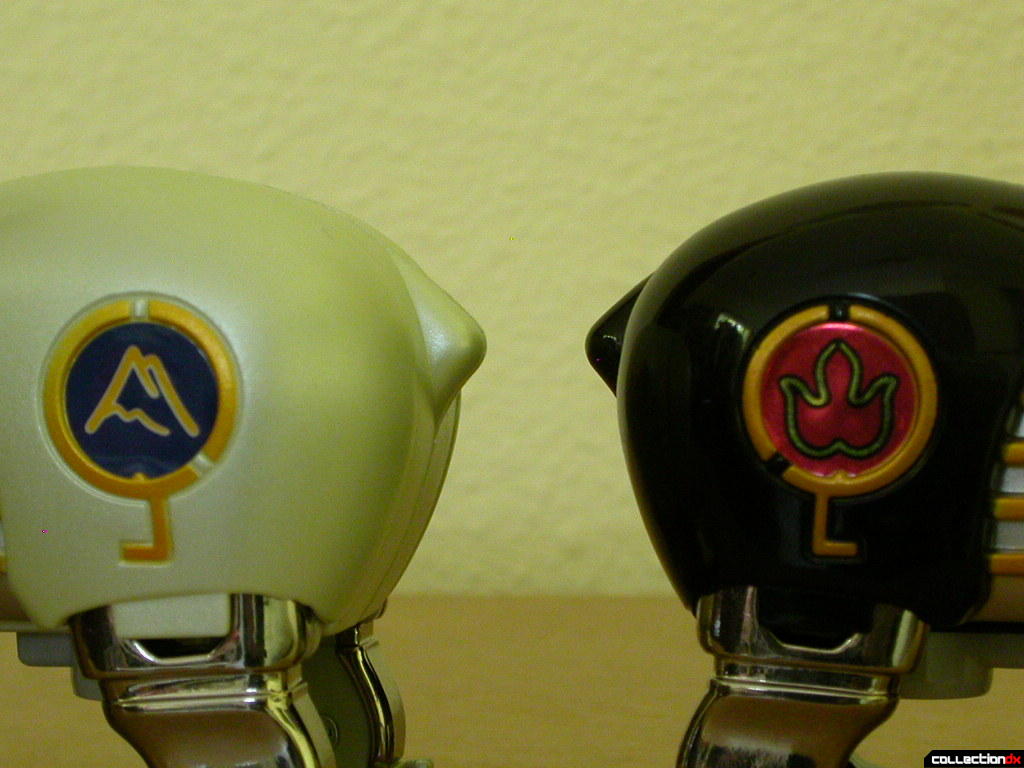 The two brother bears (back) are identical in every respect except for coloring and the element emblems along their back legs. Unlike most of the others in the Power Animals line, Gao Polar (based on an arctic polar bear) and Gao Bear (based on an American black bear) have no die-cast metal or any PVC anywhere in them. They also have no independent movement anywhere except their limited mouths (more on those later). You can’t even stand them on just their hind legs like real bears do when threatening.

For those of you wondering what they differences are between PA-1 Gao Polar & Gao Bear from “Hyakujuu Sentai GaoRanger”, and their English-speaking counterparts, the Polar Bear & Black Bear Wild Zords from “Power Rangers Wild Force”, as far as I can tell there is no difference; the transition was flawless. The two Wild Zords were not released individually, but as two of five components in the Deluxe Kongazord set. Gao Polar & Gao Bear, also, were released as part of a special release Hyakujuu Gattai Gao Muscle set, but could alternately be obtained individually (as they are here), which they weren’t for the “PR” release.

Gao Polar and Gao Bear repeatedly fire powerful elemental blasts (ice and fire, respectively) from their mouths at Cell Phone Orgu. Then, they hug each other tightly and toss their grouped bodies at the Orgu, smashing into him and dropping him. Gao Yellow gives Gao Polar’s jewel to Gao Blue and Gao Bear’s jewel to Gao White. They instruct Gao Shark and Gao Tiger to separate, and the two bears to combine in their place in order to form Gao King Double Knuckle. With increased strength, the Double Knuckle formation can block many attacks, and can use a series of heavy punches. The finisher, Bear Strike, happens when the two arms open their mouths and fire ice and fire blasts at the same time. 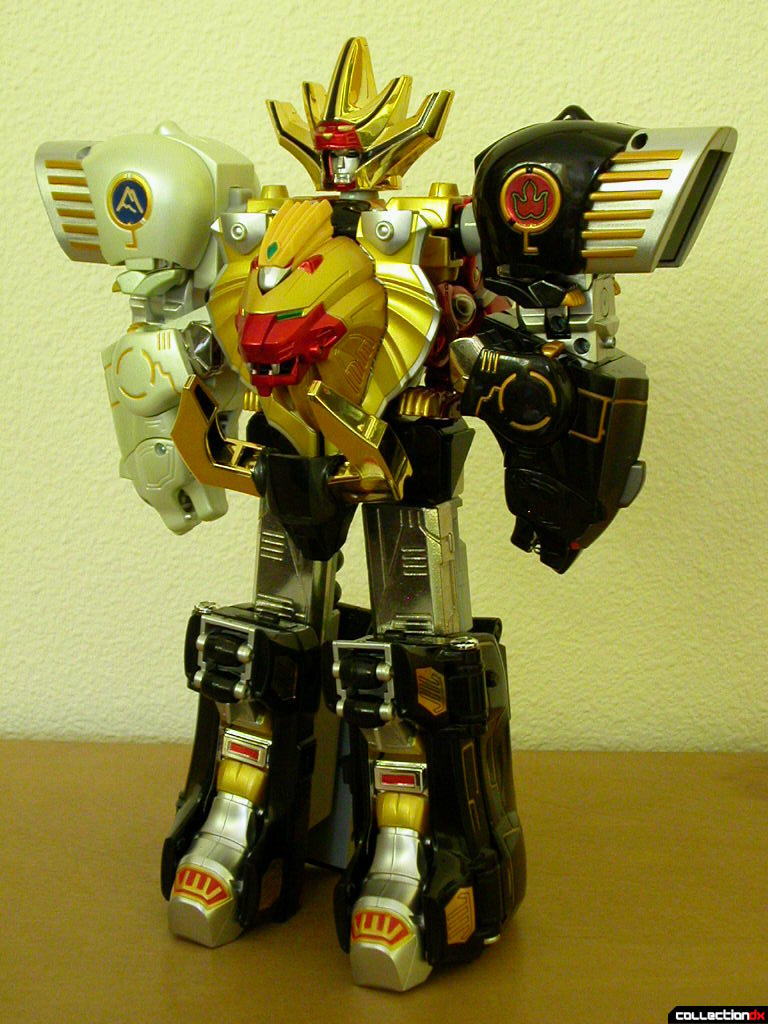 Gao King Double Knuckle (back) is a brute strength combo upgrade. His arms are huge muscled limbs with powerful boxing glove-like hands. Both arms can bend both forward and backwards to just under 45°. (They bend backwards because of the transformation process.) To fit with the elemental blasts that the Double Knuckle formation can shoot, PA-3 includes three fire- and ice-shaped projectiles for each. So, for Gao Polar, there is a large button on top of his head which opens his mouth vertically to expose a canon barrel inside. Then the projectile just snaps inside. Same with Gao Bear. The trigger buttons are located under their jaws. They actually have a good range on a flat surface of just over two-and-a-half feet! (Because it is slightly smaller, the ‘fire’ projectile always goes a few inches farther than it’s ‘ice’ counterpart.) PA-3 gives Gao King Double Knuckle a bit more bulk to it appearance wise than Gao Tiger and Gao Shark do, so it looks tougher when posed. 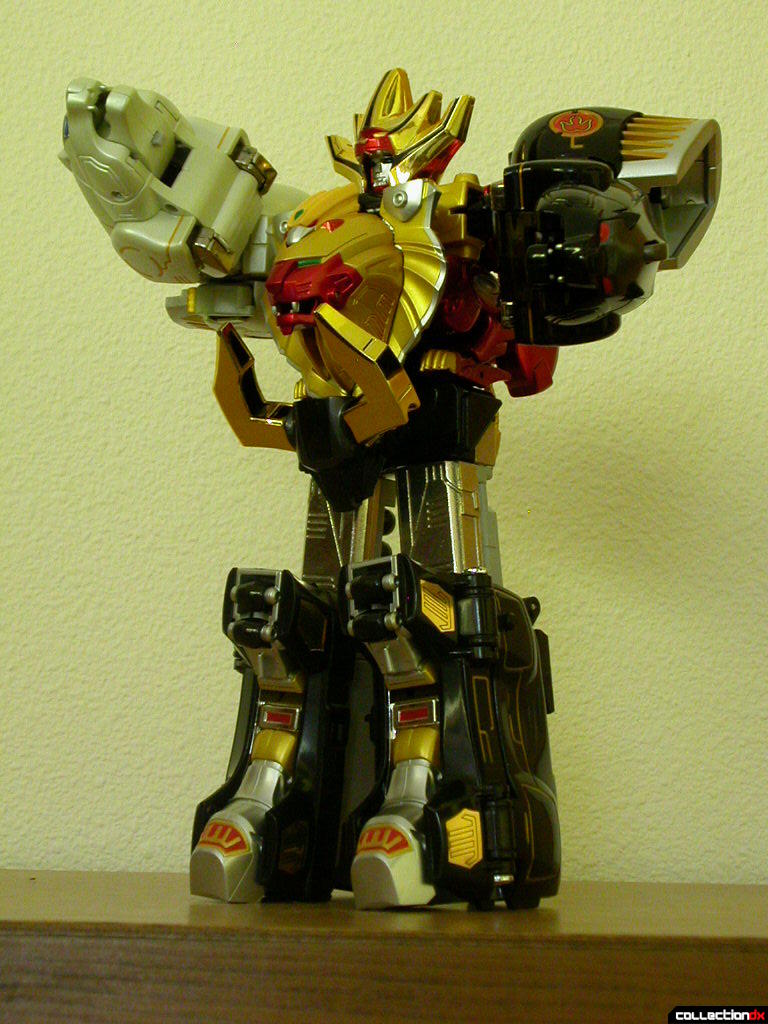 Unfortunately, the story does not end there...

Immediately after Cell Phone Orgu was destroyed, Gao King Double Knuckle suddenly and unexpectedly tore itself apart in a crackle of energy- throwing the GaoRanger from the cockpit and scattering the Power Animals across the city! Recovering from the fall, Gao Red then noticed that Gao Lion was feeling rather dejected and not looking so well. When he asked them what was wrong, Gao Polar and Gao Bear said that they would not allow Gao Lion to be above them, and disliked him for it. But- if the bears wouldn’t combine again with Gao King, what will they do next time they were needed...???

On a more personal note, I’d like to pass on my special thanks on to the owner of CollectionDX, Joshua Bernard. While in Japan at a toy fair in late Winter 06, he picked this set up for me as a gift, along with the lead DX Gougou Gattai DaiBouken from the Super Sentai 30th Anniversary series “Gougou Sentai Boukenger”. Josh- you have my gratitude and many continuing thanks, man!

Too bad the U.S. versions removed the chrome on the legs.

Oh I found these two to be kinda disappointing in the articulation area (i.e. there bricks) since the GaoKing components were quite posable. Still, they look good and make nice arms.

Honestly, I didn't care about poseability since these two were great as-is with everything else.