The GP-03 Dendrobium is from the anime, Mobile Suit Gundam 0083: Stardust Memory, and was designed by Katoki Hajime. It's made up of two machines, the RX-78 GP03S codenamed "Dendrobium Stamen" and the RX-78 GP03 codenamed "Dendrobium Orchis." You can find out more from http://www.mahq.net/mecha/gundam/0083/rx-78gp03.htm and http://www.mahq.net/mecha/gundam/0083/rx-78gp03s.htm.

On to the toy review!

The very first thing noticeable about this toy, is it's BIG! The box alone measures a whopping 66 cm X 8 cm X 38.5 cm (l x w x h), and it's heavy to boot! It's a good thing that Bandai put in a plastic handle on the box, otherwise, I would have had to lug it around while shopping. 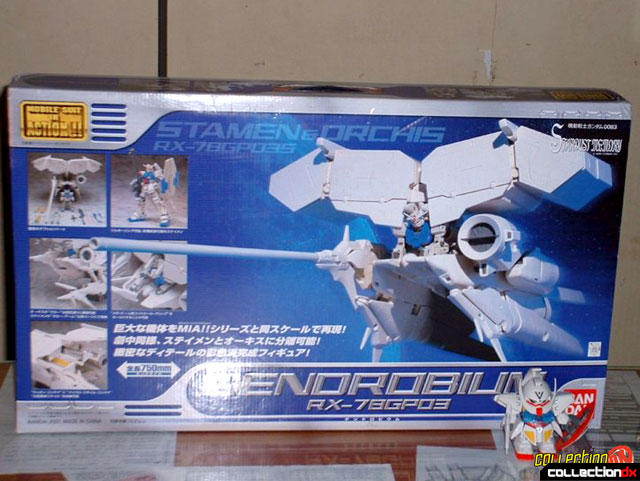 Upon opening, the inner compartment was divided into 4 sections. All of which contained the individual plastic bags (a total of 15 bags) that held the snap on parts for the Dendrobium, plus the plastic tray for the little GP-03S. 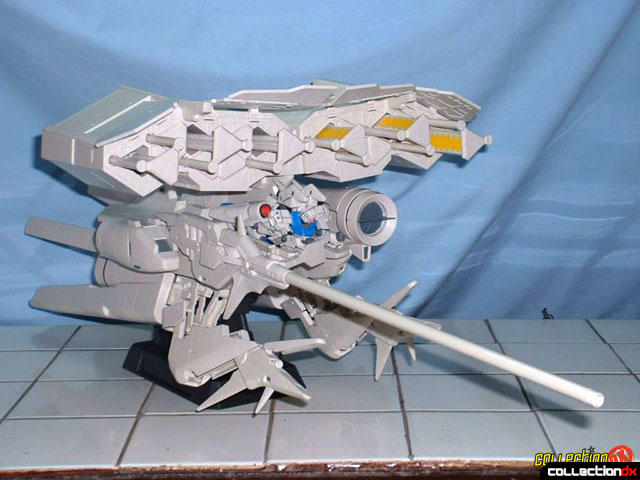 The GP-03S Stamen is a fairly nice piece, with fine details, in spite of its' tiny 10 cm frame. It has a fair amount of articulation and accessories. He comes with a shield, beam rifle, bazooka, 2 beam sabers, 4 extra fists, booster pack, side skirts/boosters, and two replacement claw arms. 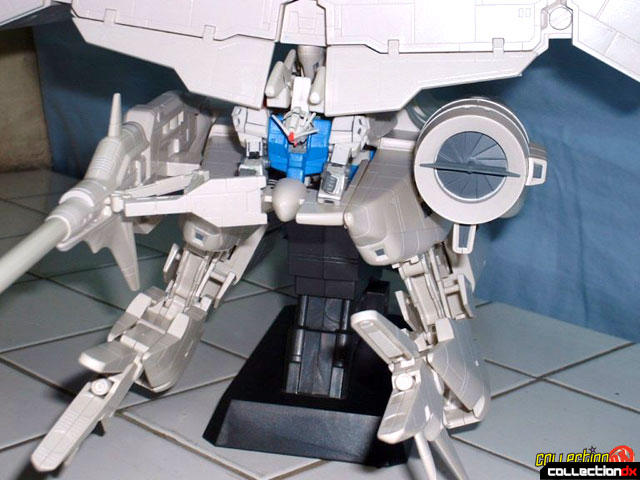 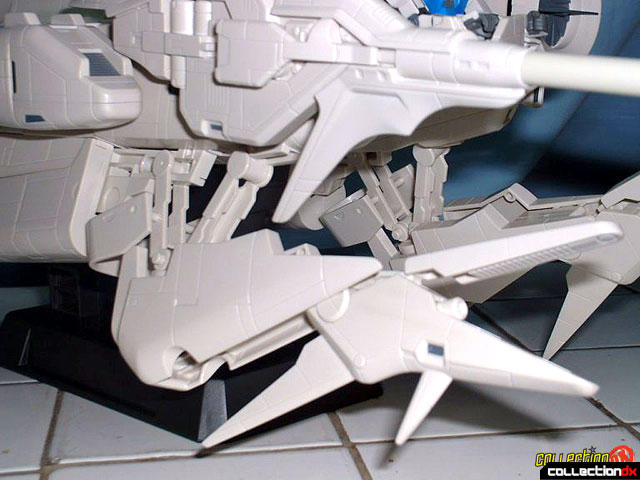 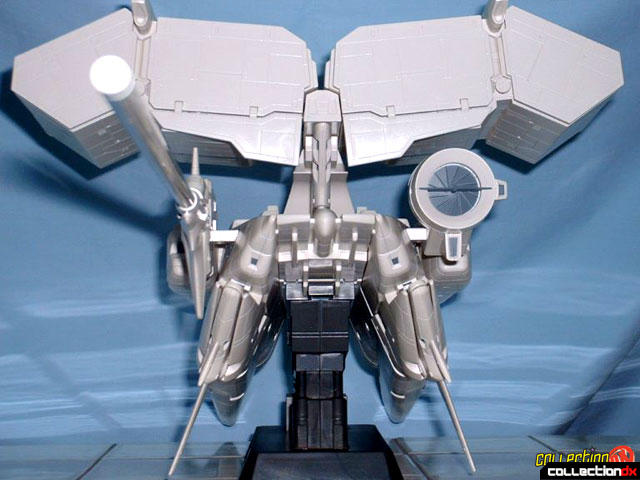 He can be posed with his Bazooka, Beam rifle, or his beam sabers, and can do some fairly decent action poses, but it does have a problem of falling over because of the weight on it's back.

The arm replacements are a nice add on, but easily fall apart like burned match sticks, anytime I try to attach them to the elbow joint of the GP-03S, and can become frustrating after several tries. The toy is also made of very GUMMY plastic. The bazooka is actually bent out of shape from the box and feels like it'll melt in your hands if you hold it too tight.

The GP-03S will do as a stand-alone figure, but too small and somewhat frail to really enjoy. 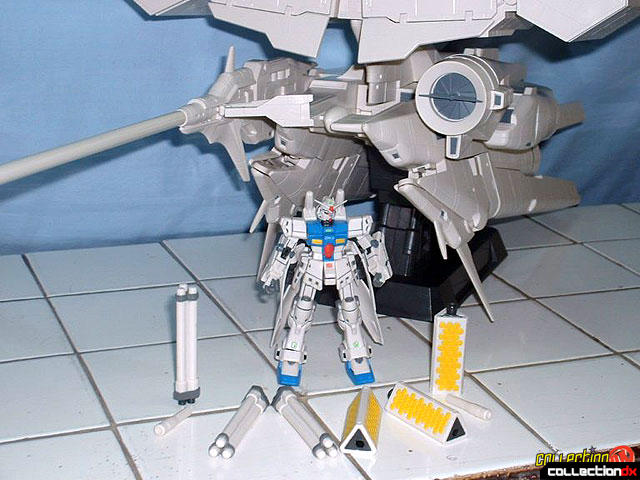 THE GP-03 ORCHIS
Now we come to the icing on the cake, the point on the exclamation, the bang in your buck; the GP-03 Orchis!

Once again, I just cannot emphasize how BIG this thing is! 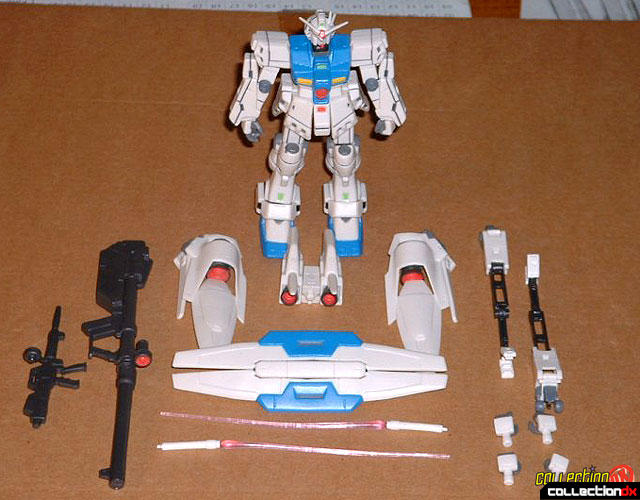 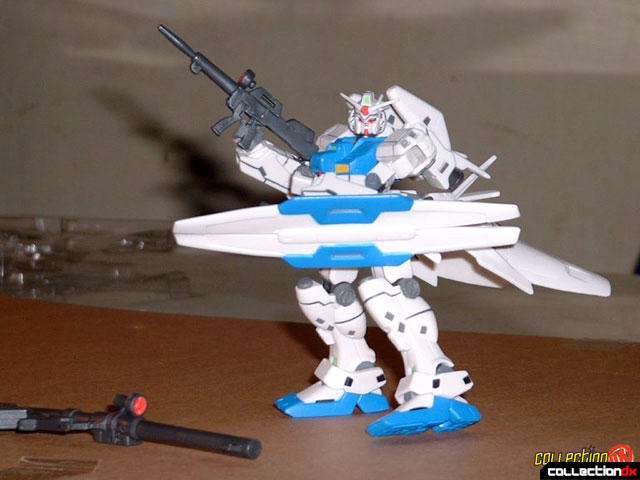 The Orchis, technically, is already a built toy. You just have to snap the parts together to make it complete. It took me about 30 minutes or less putting it together, but it didn't take me that long to appreciate the quality, detail, and size of this thing.

The Orchis has an impressive total length of 75 cm with the Beam Cannon attached (43 cm without), 25.5 cm from the lowest tip of the claw fin, to the highest point of the weapon bay, and 31 cm wide.

The panels are intricately molded into the entire hull of the ship. A little weathering and light paneling will definitely bring out the best of this toy.

Other details include opening and closing panel covers for the weapons hold, a total of 6 deployable missile bays, movable thrusters, and retractable claw arms. The retractable claw arms are probably the best thing about this toy! The claw itself opens and closes without problems. The arm extends and retracts smoothly, and folds plush into the body of the platform! Even if the arm is using a very simple sliding mechanism/system, pulling and moving it feels like it's got hydraulics in it. It's extremely gratifying!

Sadly though, the Dendrobium is not without it's issues. The biggest gripe I have is the "mast" that holds up the weapons bay. It's a little on the weak side, and tends to wobble when the weapons hold is touched. It almost feels like it might break.

Other minor gripes include:

In the end, the DX MSiA Dendrobium is an excellent piece to own.., if you can still find one that is. It took me over a year to finally find and own this toy, and now that I have it, its a sense of achievement for me. I have found one of my Holy Grails!

Aside from the minor gripes that I have, the toy, overall, is an excellent one. It's a great display piece, and can easily get the attention of any mecha or "starship" fan that comes by for a visit! It's a rare find and comes up on eBay every now and then, so get one when you have a chance! I DEFINITELY recommend it!