Super Deformed Gundam (aka SD Gundam) is an ongoing series of model kits and toys geared towards both young and old which has been around since the mid 1980s. It represents and features the more prolific mobile suits and mobile armors from the various series and movies throughout the franchise’s 30+ year history. SD Gundam follows in the tradition of other types of anime and manga, specifically the chibi theme (“small child” or “short person” in a cute or endearing way)- the body or object has oddly squat, squashed, and exaggerated proportions and then has a comically oversized head.

SD Gundam kits are very simple in assembly and feature, making them both cheap and fun to build compared to their properly-scaled and -proportionate counterparts (1/220, 1/44, 1/100, 1/60, etc.). They are a good way to introduce children to model building, but can also be a hobby for older collectors as well.
These kits are usually molded in at least two different colors, provide soft polycaps for movement, and some stickers to add color and detail where paint is not used. To make an SD Gundam kit look like it does on the box/instructions or in its respective show, however, you will need paint and other model building supplies which you need to provide. [Modern SD Gundam kits (1998-present) do not need glue, though it can be applied as you see fit.]

The SD Gundam G Generation-F line of kits based on mobile suits seen in the video game of the same name ran from 1998 to 2002. As is typical of G Generation-F kits, the feet are attached directly under the skirt armor, having no visible legs whatsoever.

The kit is molded only in white and midnight blue. (I must note that I have added only black panel lining, but no paint. All other color- green, gold, and red- is from the provided sticker sheet, all of which I have applied.)

The back of the arms, inner sides of the Twin Satellite Cannon barrels, Buster Rifle, Defense Plate (shield), and bottom of the feet are all one-sided and visibly hollow. The Hyper Beam Sword is not provided in this kit. 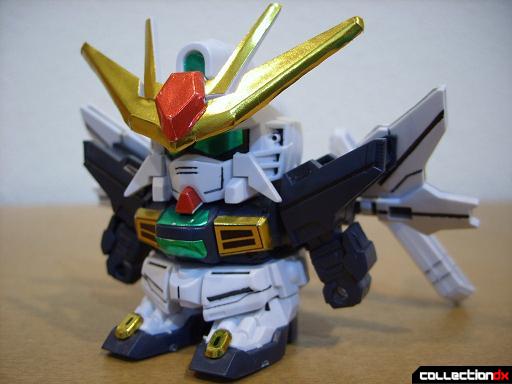 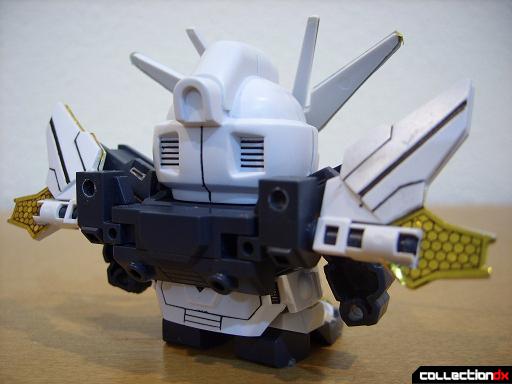 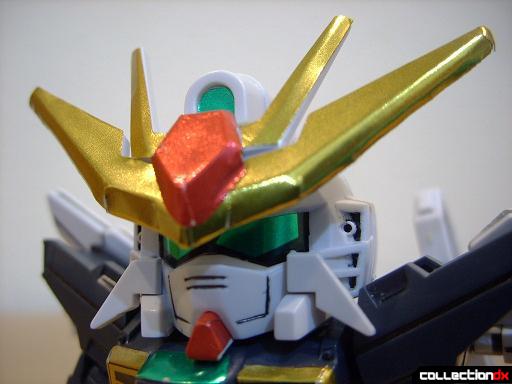 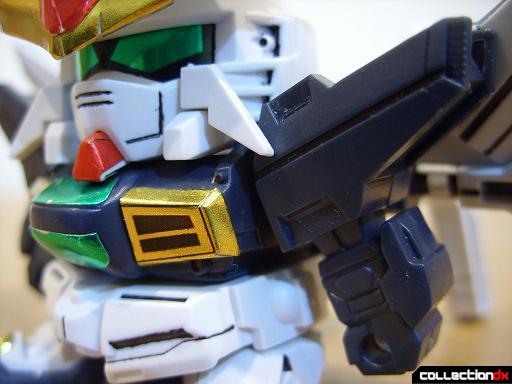 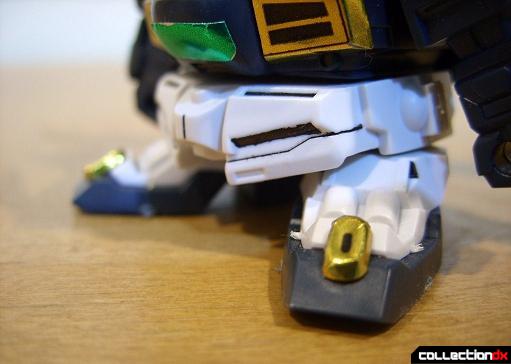 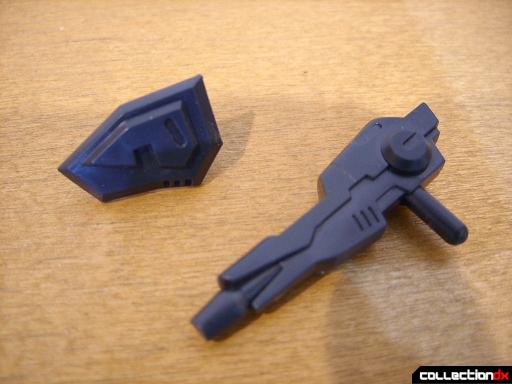 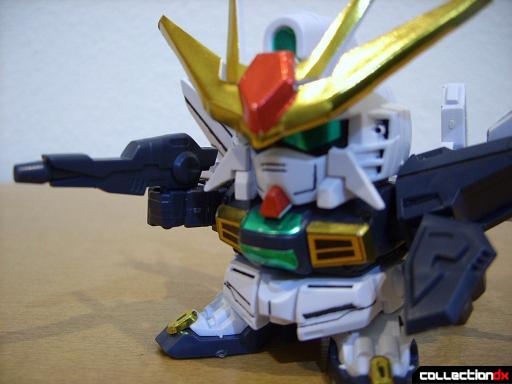 The neck, shoulders, waist, and ankles all have one-axis rotation via polycaps. The Twin Satellite Cannon uses friction joints only, as do the pegs for the Buster Rifle and Defense Plate.

The special feature of the Gundam Double X is its Twin Satellite Cannon mode. The wings on its back and panels along the forearms and calves open up to reveal an array of directed energy absorbers, which receive their power from a specialized facility on the Moon. This collected energy is then redirected into the two large cannons which flip up and over the Gundam’s shoulders for discharge at the Double X’s target.

The SD kit recreates this feature, though the arm and leg panels do not move. The panels and cannon barrels are attached on separate joints on the back which hinge backwards 45 degrees to allow them to swing about past the head and shoulders for the transformation. 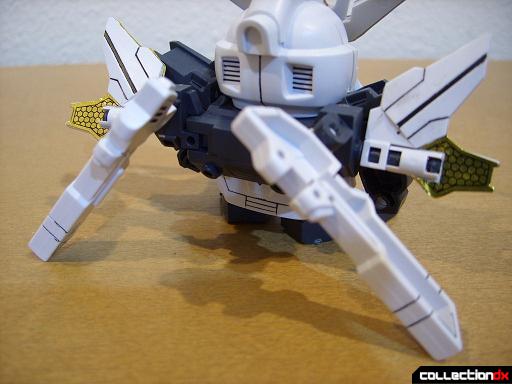 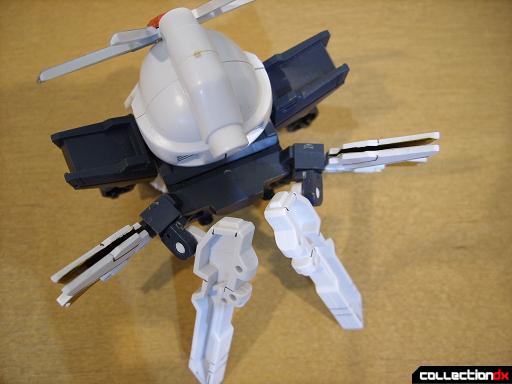 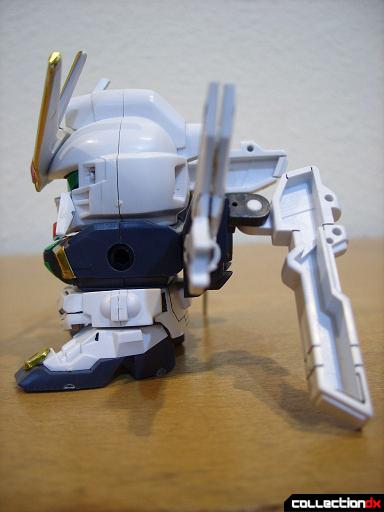 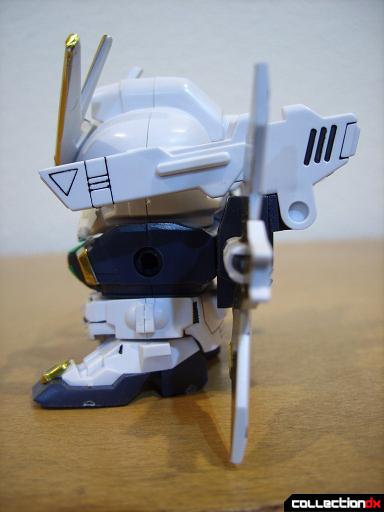 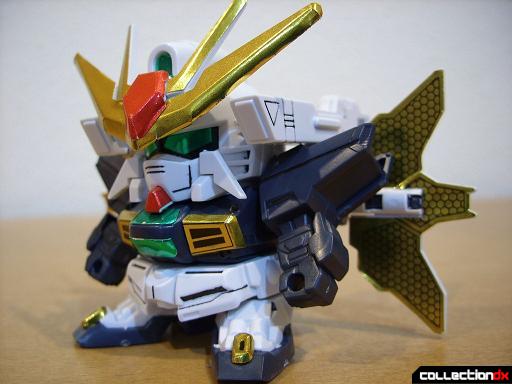 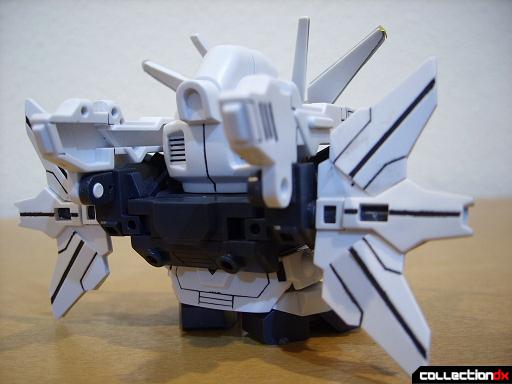 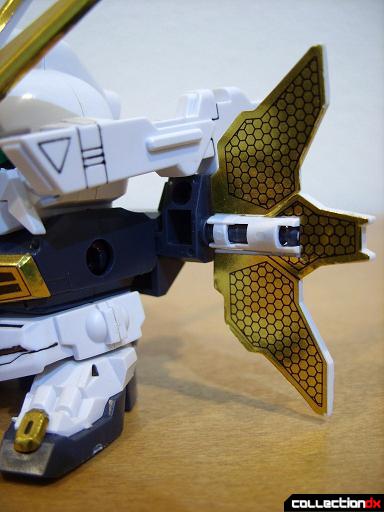 I have been a fan of SD mecha and kits for a long time, even before I joined CDX. They’re so cute and adorable, but they are cute and adorable versions of mecha that I already like! (In my opinion, very few mecha make a bad transition to SD form, regardless of how unsightly they may normally be.)

This was an impulse buy because I was on a very restrictive budget and had little time the day I saw it in the store in 2006. I already knew of and liked the Double X even though I had never seen the show it came from. Having known about the kit for some time, I knew it would be safe to get. This would be my first SD Gundam building experience, though I [still] lacked the supplies and skills needed to make it appear show accurate. 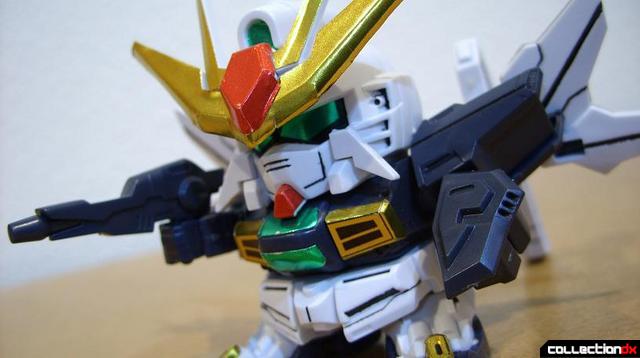 As far as assembly, there was no issue. Everything went together just fine, though the upper torso put up a little fight in putting it together (an issue with friction in the inner tabs and pins, no doubt). The V-fin has always had a tendency to pop-off, but I knew that at a later time I would want to paint that, so I left it alone. 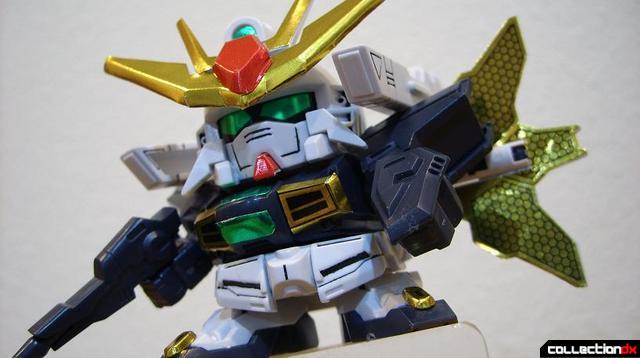 Because of those whisker-like protrusions, the head can’t turn very far to either side. All other joints have good single-axis articulation, though the shoulder armor and wings have a tendency to bump into each other.
The friction of the Twin Satellite Cannon wings and barrels has plagued it almost since Day One. The friction in their joints, or lack thereof, was non-existent because they do not use polycaps to hold their positions. While having it in Cannon Mode is fine, when in Normal Mode, things flop about and fall off quite easily back there. (I’m certain, though, that layers of paint and/or other vinyl application will take care of that enough for my tastes when I paint it up, so I’m willing to put up with it for now.) 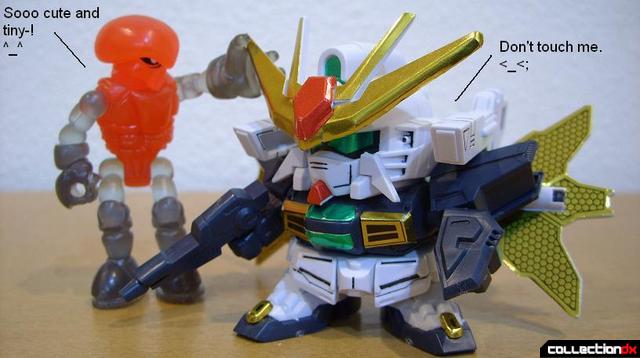 As I am still relatively n00b when it comes to Gunpla, perhaps I may be noticing something that is a given in the world of Gundam kit building, but I’ve always thought that the Buster Rifle and Defense Plate could have been molded in white rather than the midnight blue, and then have a red sticker go across the shield. Due to the age of this kit (it debuted in 2000), I know that articulation such as wrists and elbows was very rare in the G Generation-F line, so I would address not having those available, or having the arms molded half in white and the other half in midnight blue. (It will make masking and painting those lower arms a pain because you have a lot of small details to get to in there.)

The only flaws that I see in this kit- namely the poor friction in the Twin Satellite Cannon set-up, and coloring of the shield and rifle- can be easily corrected once paint has been applied. Newer sets may have dealt with the SD proportions, parts arrangement, and posability differently, but the SD Gundam Double X is nonetheless a good kit to have despite its age. 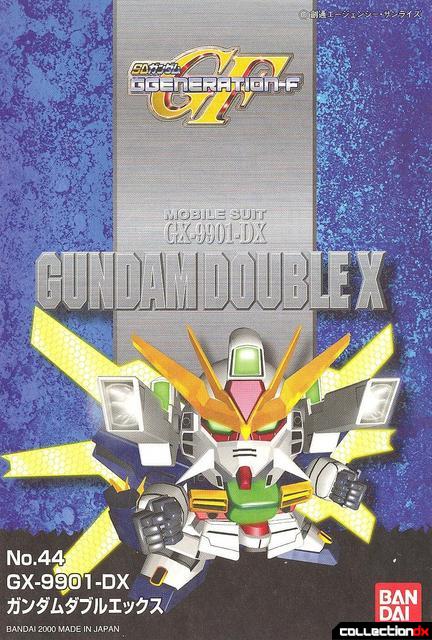